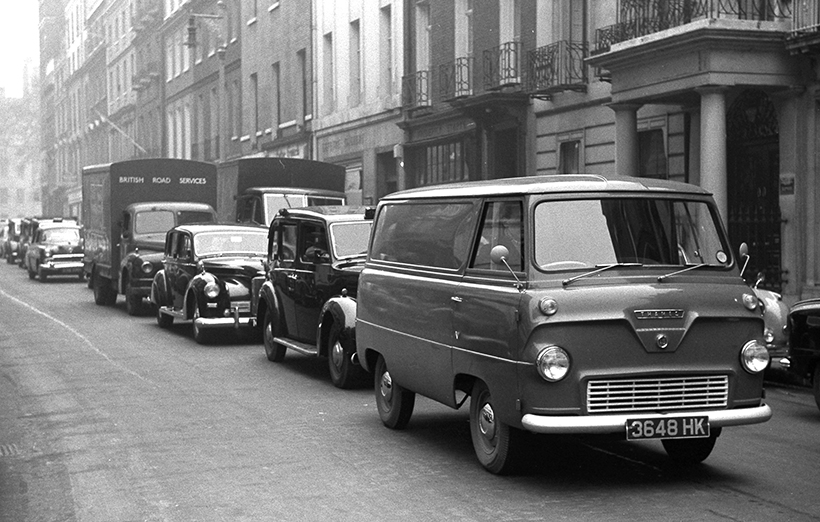 Ford replaced its out-dated E83W 10 cwt van in 1957 with the 400E. There were a number of derivatives, including the 15 cwt van seen here, a 10/12 cwt version, a mini-bus, a motor caravan, pick-ups and chassis-cabs. Powered by the 1.7-litre Consul engine, with a three-speed column-change transmission – later joined by diesel and four-speed versions – the forward control 400E was something of a breakthrough, taking Ford up to 1965 and the introduction of the market-changing Transit. This image shows an early Ford Thames 15 cwt van, 3648 HK (Essex, early 1958), on test in a London street, followed by an Austin FX3 taxi, Humber Pullman limousine, British Road Services Parcels Austin Loadstar, Vauxhall Velox and more taxis.

The classic vans on test in the photographs here date from the 1950s and ’60s, and the images illustrate the differences – as well as the similarities – that existed between the various manufacturers’ approaches to their smaller delivery vehicles. They also highlight the beginnings of the Continentals’ assault on the British market.

One particular feature that’s common to a significant proportion of them, is the provision of a sliding driver’s door. Who doesn’t remember the way that many van drivers travelled with those doors back and wide open, even when the weather wasn’t that good? It was rather like all lorry drivers keeping their window open, all the time. Yes, everyone smoked, there was the hang-over from the need to give hand signal, before flashing indicators became the thing and, with regard to the open van doors, there was the time and effort saved when making multiple drops. 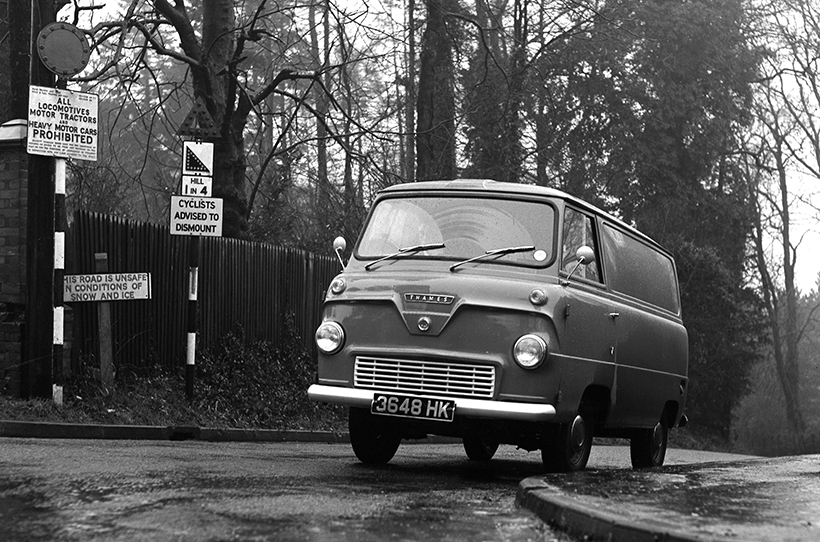 Here’s the same Ford Thames 15 cwt van emerging from a steep 1-in-4 side road, somewhere in the Home Counties, passing a whole range of period warning signs.

But, my theory is that it was more like a sort of ‘badge of honour’. ‘I drive with the door open because I can!’ I can remember doing it myself. On a nice day it gave you a great sense of the freedom of the road, rather like driving an open-top car. Even some of the test pictures show the habit.

Of course, such action would be more than frowned upon in these safety-conscious days, more’s the pity. Mind you, if the catch failed, and the door slammed forward when you stopped suddenly, it would certainly add to the drama of the situation – or worse, catch some fingers – so maybe the Elf ’n’ Safety do-gooders are right… 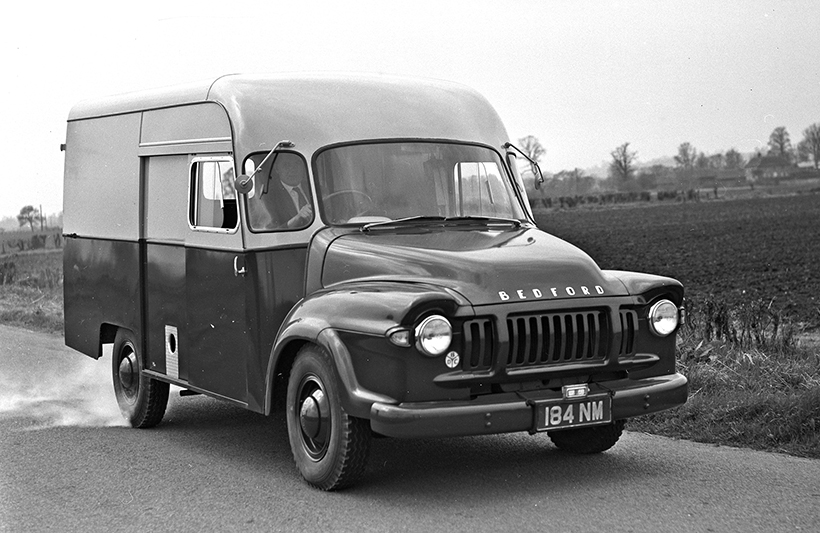 An action shot, with smoke coming off the rear tyres as the vehicle is subjected to an ‘emergency stop’. Notice that this test could be done on a little-used country road, without any danger to others, in those days. The Bedford J1, with integral van bodywork by Hawson, was being road-tested in about 1960, on the manufacturer’s Bedfordshire trade plates, 184 NM. This type of van was popular for many years, before derivatives of the Transit ate into their market.

There aren’t that many photos of vans on test among those showing the many vehicles put through their paces by the journalists from Commercial Motor magazine, which presumably reflects the level of interest – or rather, lack of it – in this sector of the vehicle market; something we’ve commented on in the past.

It has to be said that, until the advent of the Ford Transit, followed by what we could reasonably call ‘lookalikes’ from the Continental manufacturers (which, of course, now hold sway), the light vans and pick-ups of the early, post-war years were nowhere near the cutting edge of vehicle design. In many cases they were almost ‘bitsas’ from the parts bin in a fairly boxy body. In general, they did the job which was asked of them, in a no-frills manner. 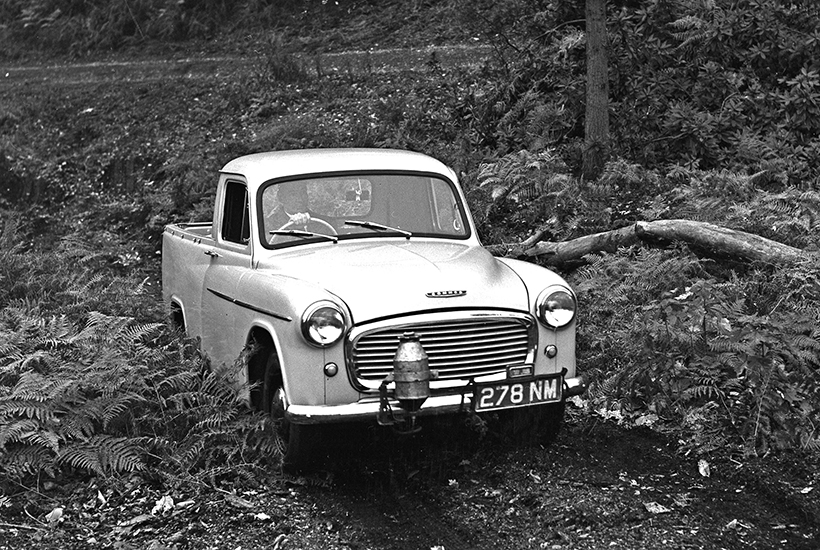 More Bedfordshire trade plates, 278 NM, this time on a Commer ½-ton pick-up. The Commer Express van and pick-up were based on the Hillman Minx Mk VII, at the time powered by a four-cylinder, side-valve, 1,265cc engine (later replaced with a more modern, ohv unit, like the car). This early example was tested on and off-road in Kent in 1954, with various loads from 4 to 7½cwt, and seems to have acquitted itself as well as might have been expected from a four-wheel-drive vehicle. Note the small tank mounted on the front bumper, fitted in connection with fuel consumption tests.

But they are interesting all the same. With so few surviving into preservation – maybe lacking the attraction of larger vehicles for restorers, or because most were driven into the ground by their owners and operators – we’re unlikely to see many of these still on the road today. But many of you will, I’m sure, remember driving some of them, so these photographs should provide a nostalgic reminder of this rather neglected part of the ‘roadscene’ of the past. 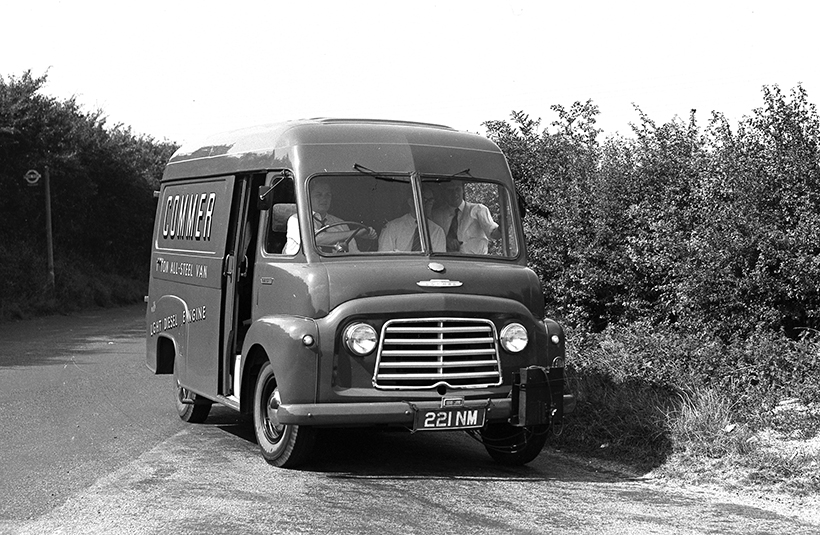 The Rootes Group was always good at marketing its products. For example, this Commer BF one-tonner was sign-written to let everyone know its body was of all-steel construction and that the vehicle was diesel-powered. 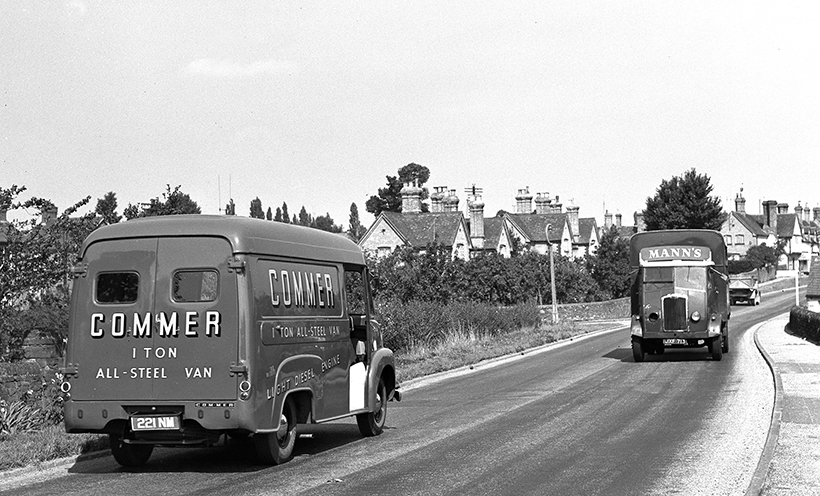 Here’s the same vehicle, again on Bedfordshire trade plates, 221 NM, this time being tested in 1959, on a summer day, judging by the shirt-sleeves and open sliding door. The one-ton version had a one foot shorter wheelbase than the 30cwt version. Note the somewhat battered, Thornycroft Sturdy, of Manns Brewery, approaching from the opposite direction. 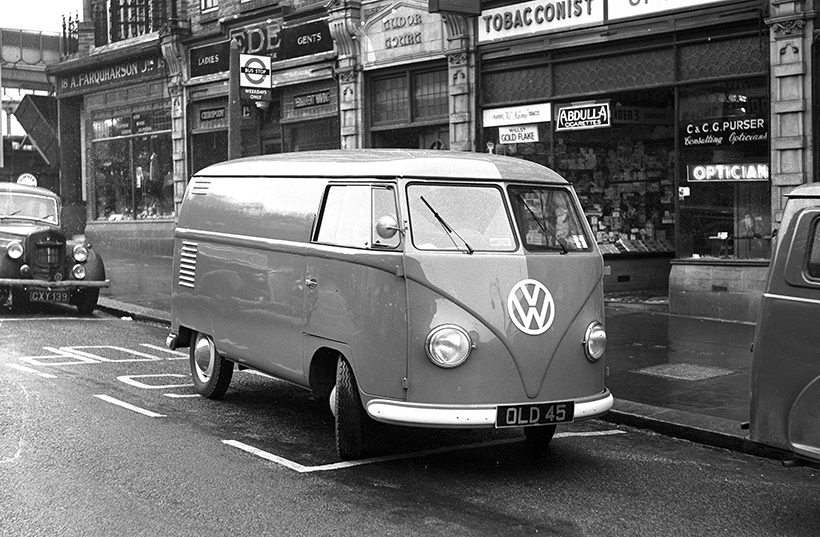 In a Commercial Motor road test report, published in April 1954, with the headline Newcomer Sets High Standard, this early Volkswagen Transporter van, OLD 45 (London, late 1953) seems to have impressed the tester, coping well on a town and country route, including the 1-in-4 Succombs Hill, with loads of up to 15cwt. 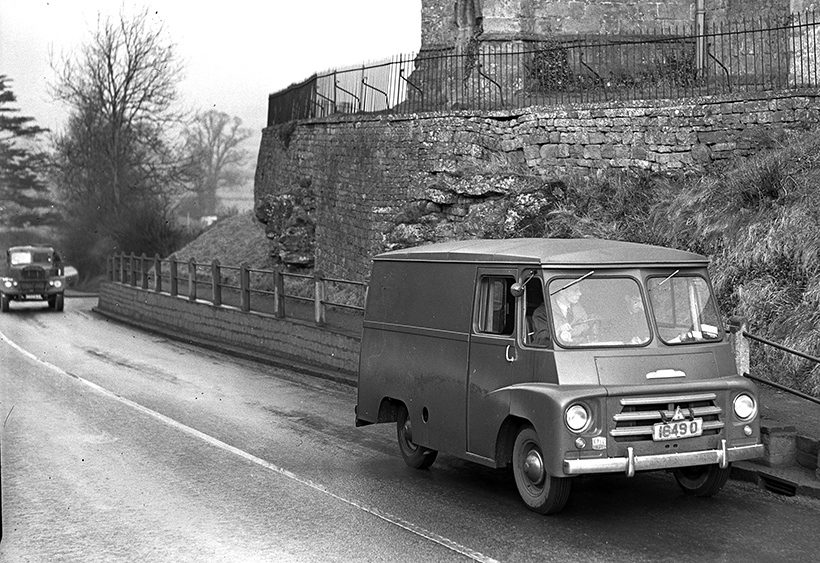 The Morris and Austin-badged LD 1 and 1½-ton vans were available from 1952 to 1967. This Morris one-tonner, fitted with the BMC 2.2-litre diesel engine – if the badge beside the grille is anything to go by – was tested around a Midlands route in the mid-1950s, on Birmingham trade plates, 1649 O. Note the wartime Austin K6 six-wheeler, still in military service, in the background. 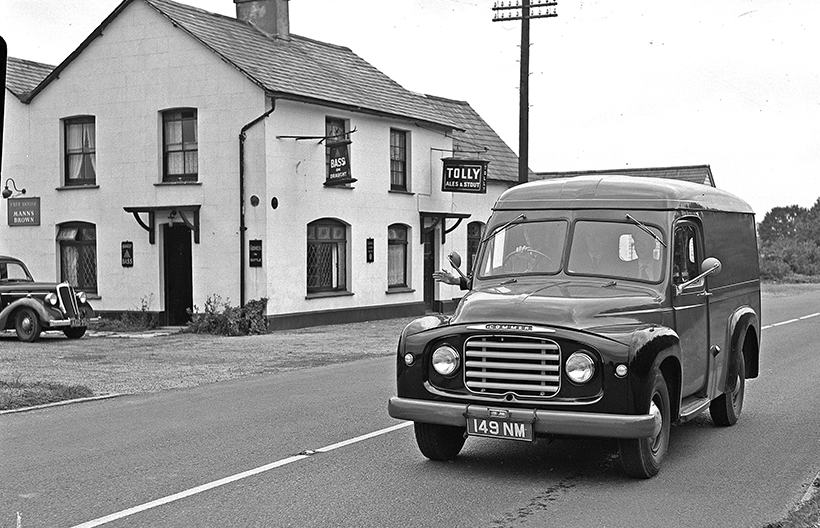 We seem to have several Commers in this selection; there’s no bias, it’s just the number of van test pictures I’ve found, which we haven’t used before! This Commer Superpoise 25cwt normal-control van was being tested in 1956, on trade plates, 149 NM, as it was fitted with the then new, Rootes 2.26-litre indirect injection ‘small diesel’ engine. The driver can be seen giving a right turn hand signal in those pre-indicator days. The pub in the background, with the pre-war Standard outside, was obviously a ‘free house’, as it’s advertising Manns, Bass and Tolly beers. 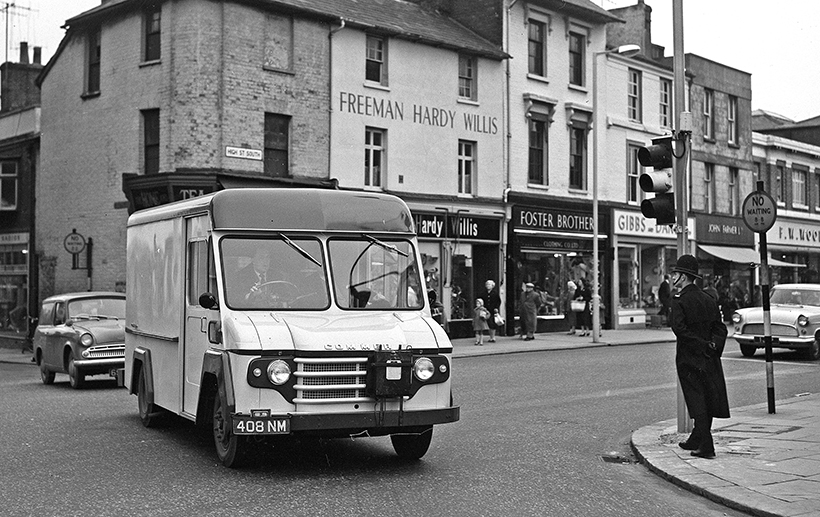 The same engine was fitted in this Commer ‘Walk-Thru’ 30cwt van, tested in 1961, by Tony Wilding, on trade plates, 408 NM. I believe it was photographed crossing the A5 in the centre of Dunstable, not far from the Commer factory. The fuel consumption test tank can be seen on the front. The van’s performance apparently compared favourably with the three-litre, diesel-equipped two-ton version the tester had driven previously. 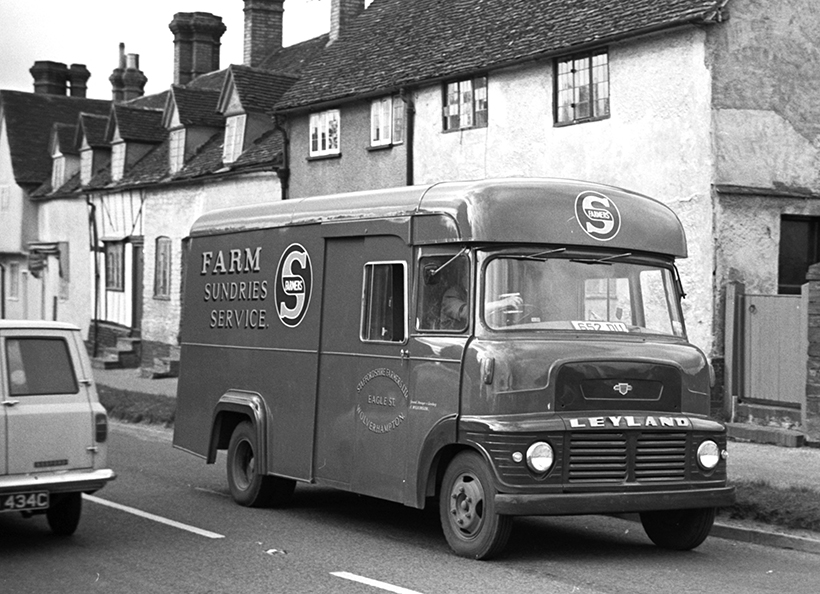 The Leyland two-ronner was introduced in 1962, becoming the Leyland 90 in 1964, reflecting its 90cwt (4½ tons) gross weight. In 1965, it seems the manufacturer had to offer a vehicle for test which was about to be delivered to a customer, Staffordshire Farmers of Wolverhampton. The Martin Walter-bodied integral van was powered by the Leyland OE160 2.61-litre diesel, which delivered 6hp. Its performance was praised, but all sorts of details seem to have let it down. 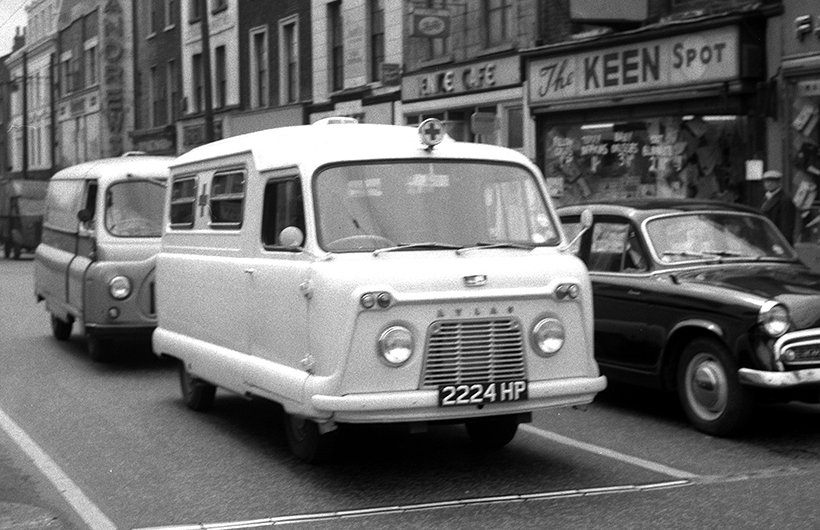 Rather than a van, CM tested a Lomas Ambulance conversion of the 10/12cwt Standard Atlas van in 1960. Perhaps surprisingly, the tester seemed to be quite impressed with the vehicle thus equipped, seen here in a London street, being followed by one of its rivals, a Morris J2. 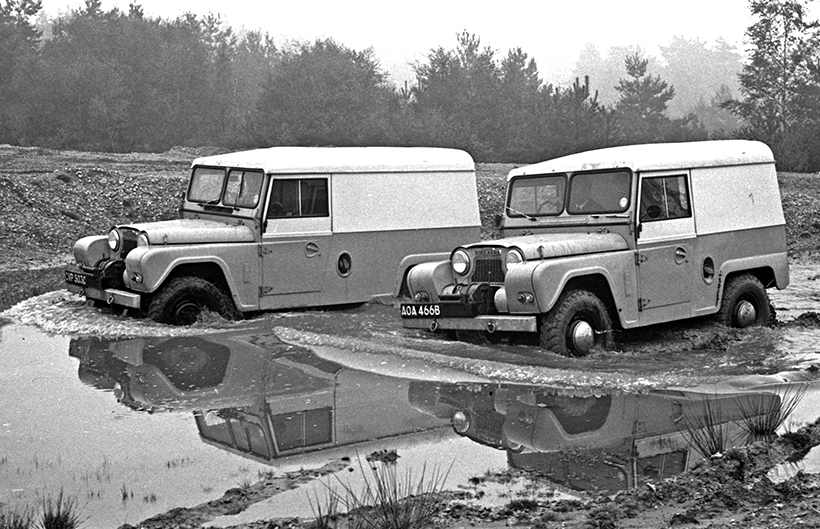 A big splash was made about the introduction of the Austin Gipsy, when it was arrived in 1958, as a competitor for the Land Rover, but it never really caught on. All-steel, with independent suspension, the model was available until 1968, with a long wheelbase version, from the Series 2 of 1960 onwards. Stretching a point with regard to the ‘Vans on Test’ theme, here are two hardtops, short- and long-wheelbase versions, AOA 466B and CVP 503C (Birmingham, 1964 and 1965), having a paddle on an off-road test track. 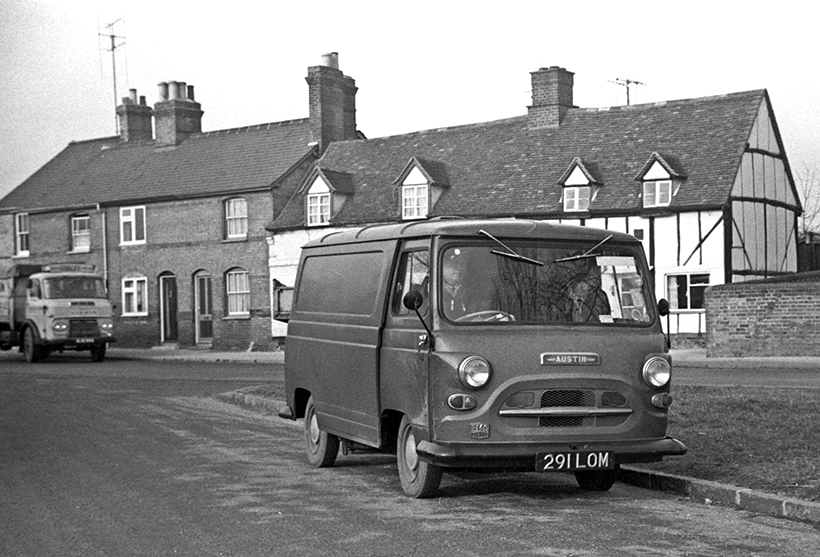 Sporting both an Austin and a BMC ‘Diesel’ badge, this J4, 291 LOM (Birmingham, 1964) was photographed at a location on the A5, where we’ve seen other vans on test in the past. Perhaps there was a cafe there, as we can see a couple of lorries in the background. A petrol-powered 10/12cwt capacity J4 had been tested in 1960, soon after its introduction, and a diesel-driven Morris J4 was tested in 1962, again when it was introduced, so this test was probably just prompted by the ‘badge engineering’. 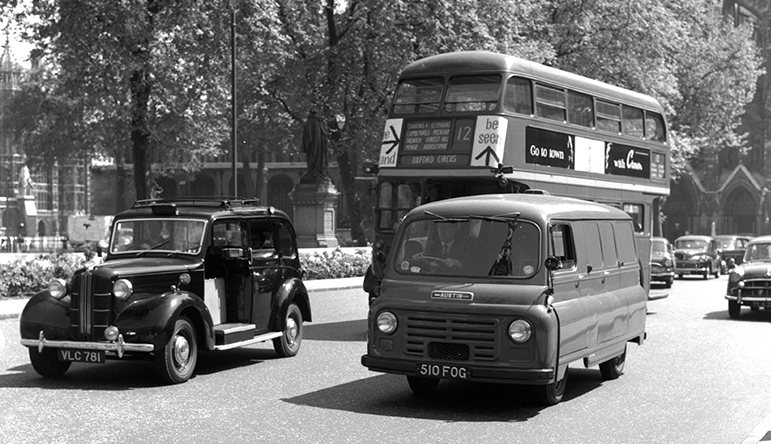 Back in 1962, the other forward-control van from the BMC stable, this slightly larger Austin 152, more usually known as the J2, 510 FOG (Birmingham, 1961), now uprated from 15cwt to 16-18cwt (depending on whether a passenger was carried!) was tested with the BMC 1.5-litre diesel engine, the petrol-powered version having been tested on introduction in 1956. It was photographed on what looks like Park Lane in London, with an Austin FX3 taxi, an RT-class bus and a Morris Oxford. 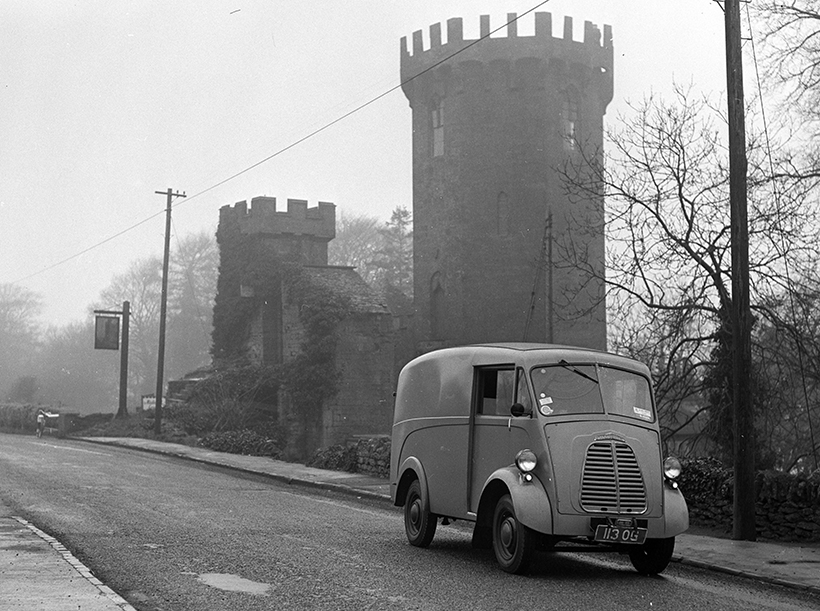 Going back to 1957, the Morris JB van was tested when the B Series 1.5-litre overhead valve petrol engine and four-speed gearbox replaced the former side-valve unit and three-speeder, after the van had been on the market for nine years. This brought it in line mechanically with the bigger Morris J2/Austin 152 ‘Omnivan’ seen previously. The older model was still considered to be a contender in the van market. 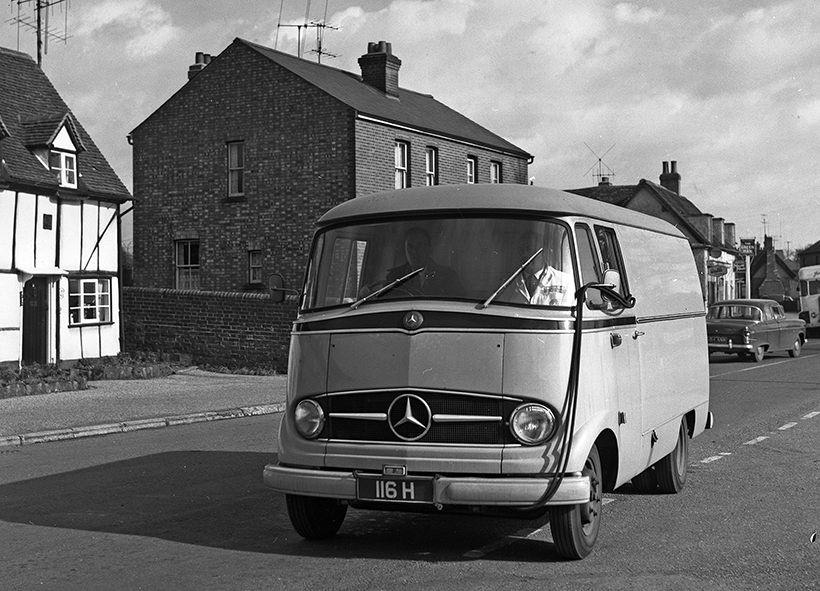 The Mercedes-Benz L319 D 35cwt van was introduced in Britain as early as 1961, when this example was road-tested on the manufacturer’s Middlesex trade plates, 116H. Performance was considered sluggish, from the 1.8-litre diesel, as fitted in the Mercedes 180 car model, but access, ‘driver considerations’ (comfort?) and finish were all praised. The model was fairly common on the Continent, but remained rare in the UK. 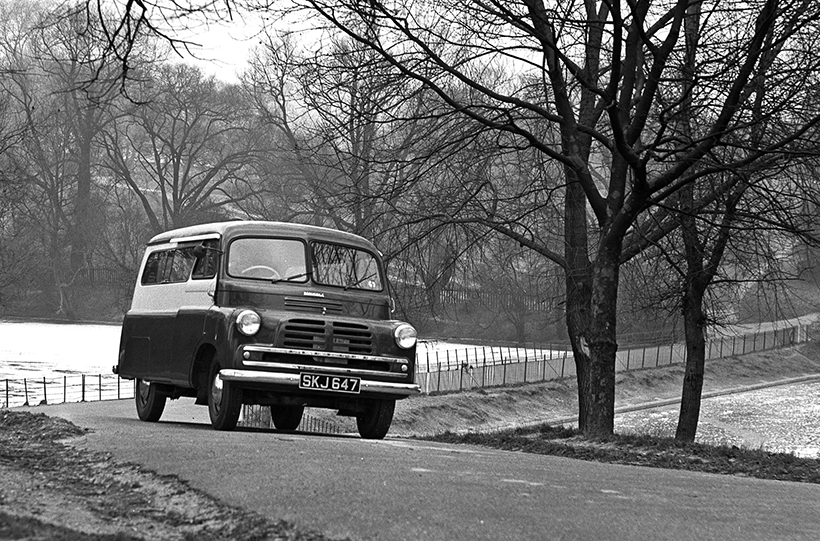 Possibly not subjected to a rigorous road test, but certainly driven to be photographed in this attractive setting, a couple of years after the model’s introduction, was this early Bedford CA, SKJ 647 (Kent, 1953), converted to a passenger-carrying vehicle, by Marin Walter of Folkestone. The ‘Dormobile’ badge can be seen below the split windscreen. The cardboard behind the grille looks rather less than professional… 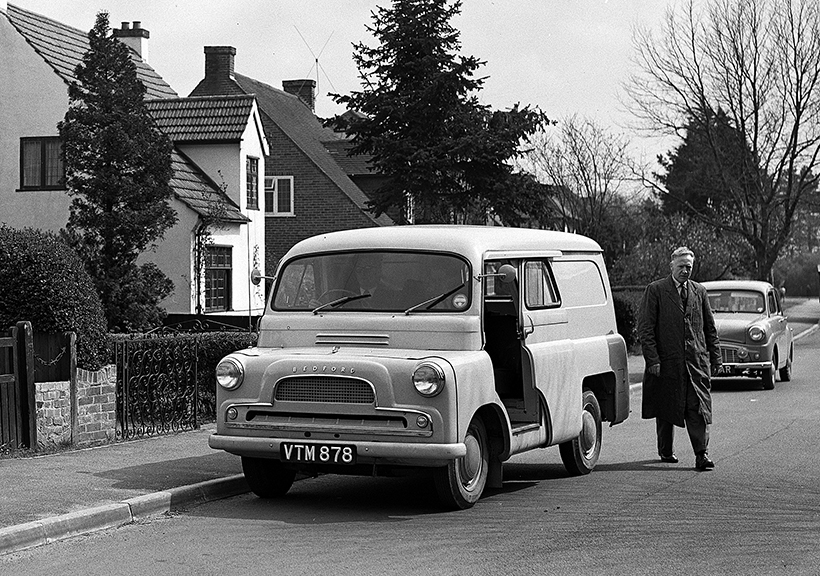 The Bedford CA van was also tested in 1959, under the heading Face-lift for Firm Favourite. The popular 10/12 or 15cwt van was said to be selling at about 150 a day at the time. The new Vauxhall Victor engine and three-speed gearbox had been added in 1957 while, two years later, the split-screen was replaced by a one-piece, flashing indicators became standard and the rear wheel spats were eliminated. Interestingly, unlike the view seen here, the images appearing in CM with the report were ‘doctored’ to show the new, smaller rear wheel-arches. Also, after the usual test loaded with sand bags, the van was taken on a delivery round from Harpenden grocers, WE Bentley & Sons. 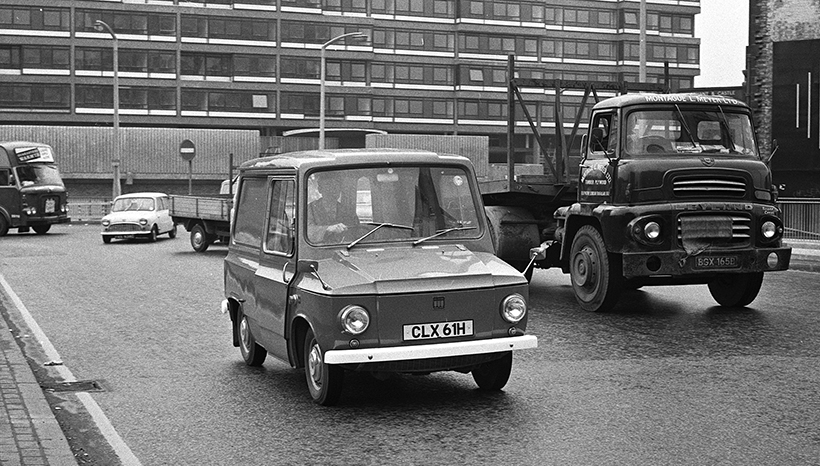 And finally, something completely different. This was a delivery van, similar to a large number delivered to the Swedish Post Office, by Kalmar – better known for fork-lifts and container-handling machines – based on DAF’s ‘Variomatic’ car. CLX 61H (London, 1969-70), is seen being test-driven around the Elephant & Castle area of London, here in the company of Leyland Super Comet tractor unit, BGX 165B (London, 1964), of Monatgue L Meyer, the timber importer, a Mini and a Gas Board Dennis van. The Kalmar van obviously didn’t catch on in the UK, as this is the only one I’ve ever seen! 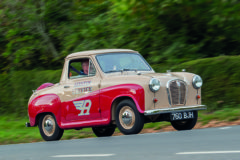 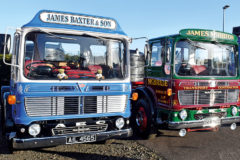