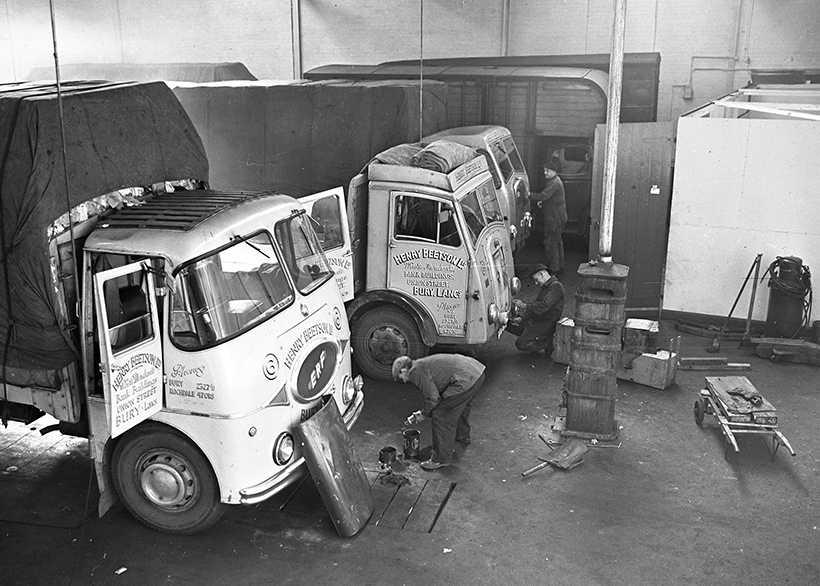 Historic Commercial Workshop Scenes: A lovely shot of 1950s vehicles from the fleet of Henry Beetson, Waste Merchants, of Bury, Lancashire, with 1953-registered, KV-cabbed ERF 44G, BEN 990, still loaded with bales of waste paper, a Perkins-powered Dennis Pax and an Albion Chieftain, all receiving attention. Other vehicles can be seen to the rear, including what looks like an Austin K4 with a livestock body.

I remember when going out and about, to see all sorts of operators to interview them about the transport elements of their businesses, during my days at Motor Transport and for other transport and distribution titles, that a visit to the on-site workshops was often part of the day’s activities. So, it comes as no surprise that there are plenty of workshop scenes among the photographs in the Stilltime archive, originally taken for Commercial Motor.

It’s only over the past 30 or so years that maintenance and repairs of company fleets has gradually been more or less entirely entrusted to the dealers who supply the vehicles to operators, usually under some contract maintenance scheme, if not part of a lease-hire agreement. Only a few companies now have their own garages or workshops to look after their vehicles, unlike days gone by, when the majority of maintenance was carried out ‘in-house’, even for comparatively small fleets.

Delving into this fascinating photographic record gives us the opportunity to look at all sorts of vehicles from a different angle, and to remind ourselves of some of the effort involved in running commercial vehicles assuming, of course, that you undertake the whole job yourself, rather than contracting out the oily bits.

We don’t often get the chance to go into modern workshops – Health & Safety, you know – but, from the little I’ve seen lately, they seem rather antiseptic places, devoid of a lot of life, where you might even be prepared to eat your dinner off the floor. Not so in the old days, as we’ll see from the images here. In fact, you’ll probably feel like wiping your hands with a not-too-oily rag after studying these scenes! 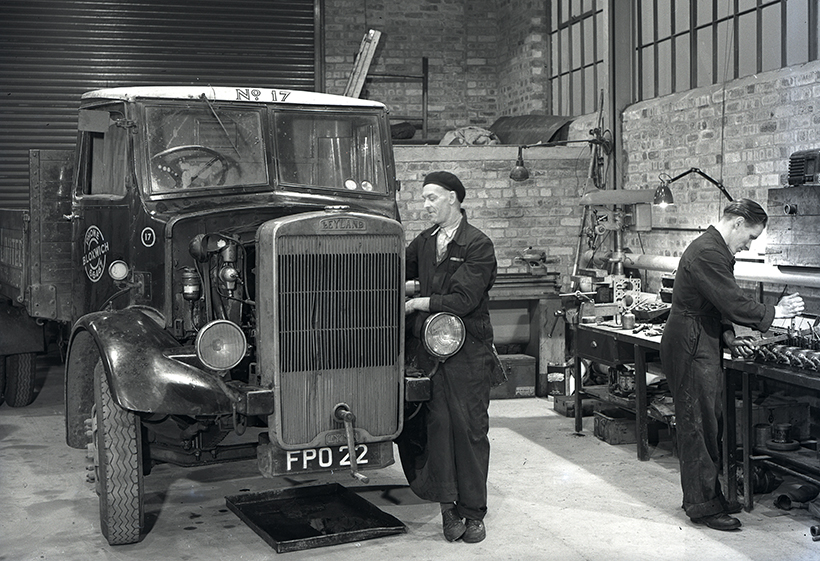 Showing an advantage of normal control lorries, with easy access to the engine, the mechanic was leaning almost casually on the front wing of Leyland Lynx, FPO 22 (West Sussex, wartime), now working for a company with a Bloxwich telephone number. The photograph is from a sequence showing the vehicles of Brevitt of Willenhall, so it cold have been this company’s workshop. 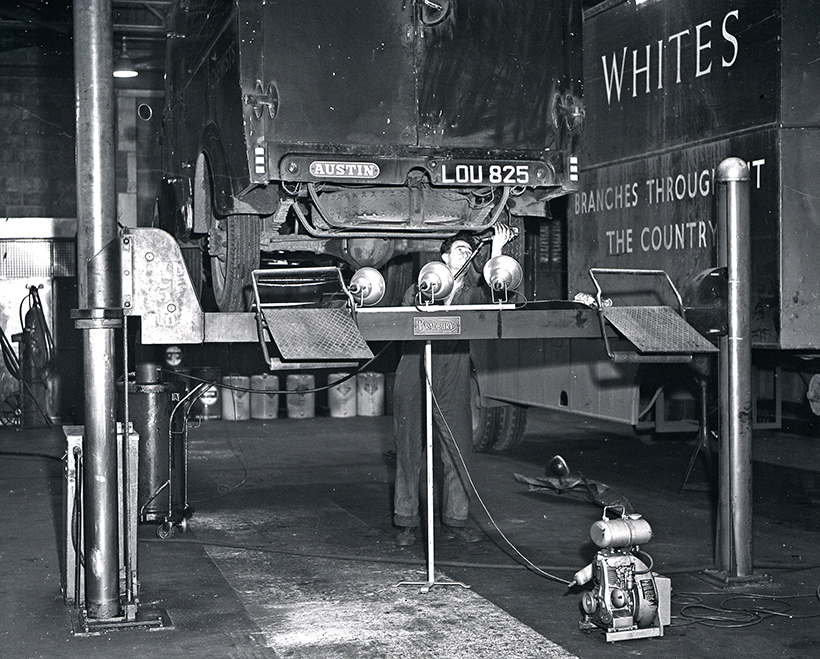 An Austin K8 ‘Three-way Van’ is on the Bradbury hoist, marked with an ‘SWL’ – Safe Working Load (not ‘Safe Weight Lifted’, as I’d always thought…) – of five tons. The floodlights were showing little more than the bald spare wheel, so the mechanic was also using a lead-light to look at the rear axle. LOU 825 (Hampshire, 1954), was in the workshops at Timothy Whites’ warehouse in Basingstoke, from where the chain of chemist and hardware stores were supplied. 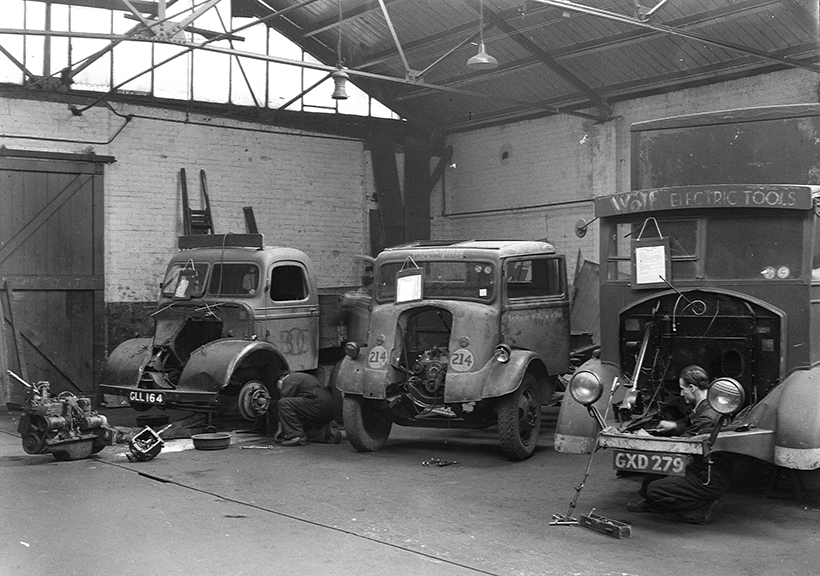 You might wonder whether any of these lorries would ever run again, but they were being worked on when photographed, perhaps at a vehicle dealer’s premises, in the early, post-war years. Left-to-right we can see GLL 164 (London, 1942), a pre-war-type Dodge, with the ghost of ‘BOC’ – British Oxygen Company – on its door, with its engine and gearbox on the floor in front, a Fordson 7V, minus its radiator, showing off its V8 petrol engine, carrying the name of the contractor – Sir Robert McAlpine & Son – and a Dennis 45cwt, with a coach-built cab and van body, GXD 279 (London,1943), carrying the name Wolf Electrical Tools (Remember them? The London company made electric drills before Black & Decker, but sold out to Kango in the 1980s). The Dennis still has its white, wartime markings on the front, but a fine set of headlights, not little, wartime ones. The mechanic was crouching where the engine would have protruded, as on the similar Ace ‘Flying Pig’ bus chassis. 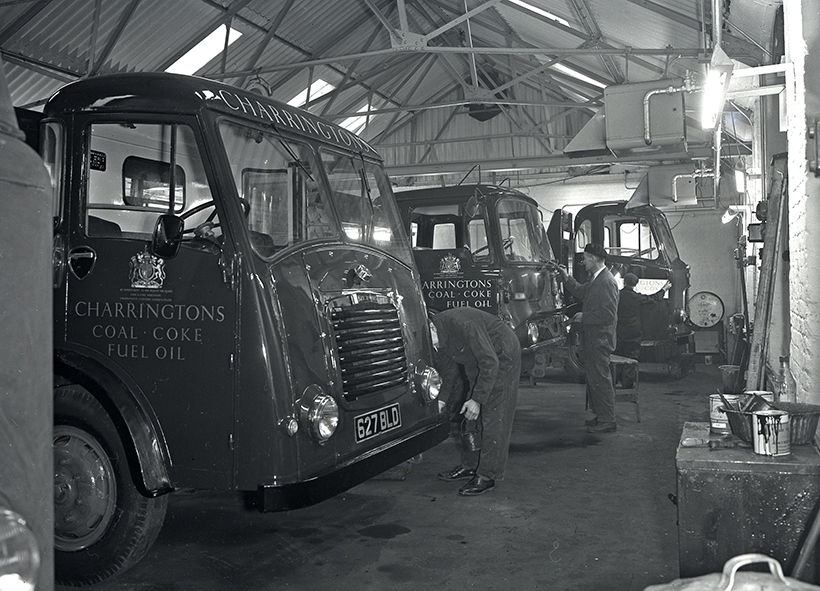 Two shots now taken in the workshops of Charringtons, the coal, coke and fuel oil distributor, from the early 1960s. Here we see three coal lorries, a new-looking (or newly repainted?) Dennis Pax, 627 BLD (London,1961), a Bedford TK, minus its bumper and grille and another Dennis, having a lettering transfer applied to the door, in what was presumably the paint shop. The Charringtons fleet was quite varied so the mechanics had to deal with a number of different makes – AEC, Bedford, Dennis, Leyland and, as here, Commer, with two QX-based tankers. But that doesn’t look like a TS3 diesel engine having its cylinder heads replaced on the stand in the centre. 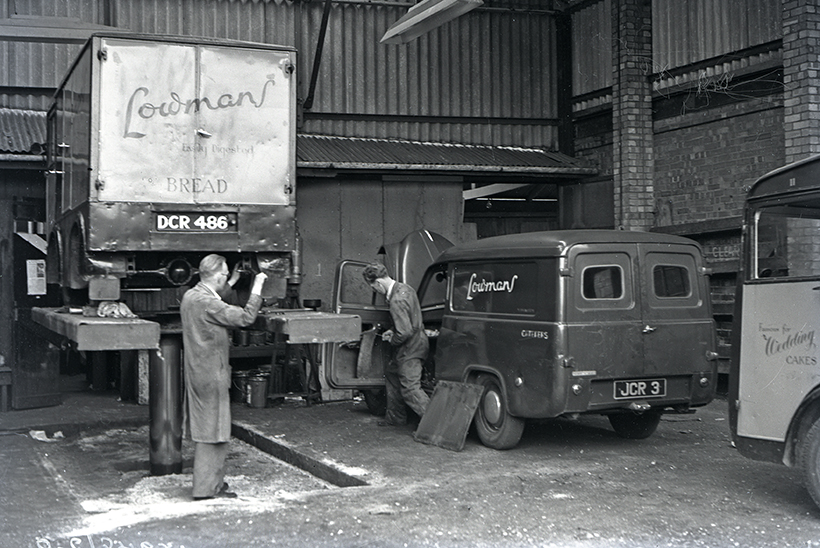 Here, we see the garage of Lowman’s, the Southampton-based bakers, in the mid-1950s. Being worked on were a Morrison Electricar van, DCR 486 (Southampton, 1940), on the ramp, lifted by a single, hydraulic ram, while another waits to the right, and a 1951 Commer Express 10cwt van, JCR 3 – I bet that registration is on a fancy car, now! 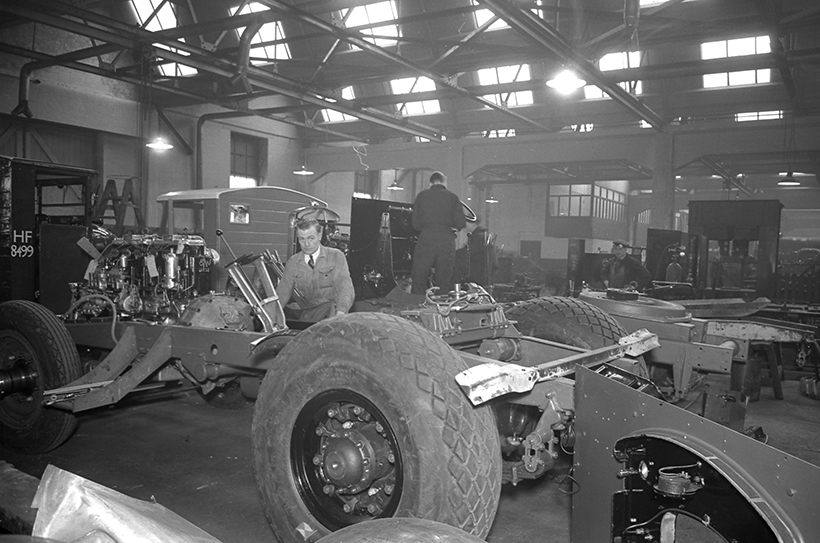 Strictly speaking, this was a factory, rather than a workshop, but there was no production line. We see a Scammell ‘Motive Unit’ chassis, with wheels, axles, gearbox and Gardner 6LW engine installed, before the bulkhead, steering and radiator were fitted, like the one beyond, with a cab ready to be fitted, in front of the Mechanical Horse to the left rear. 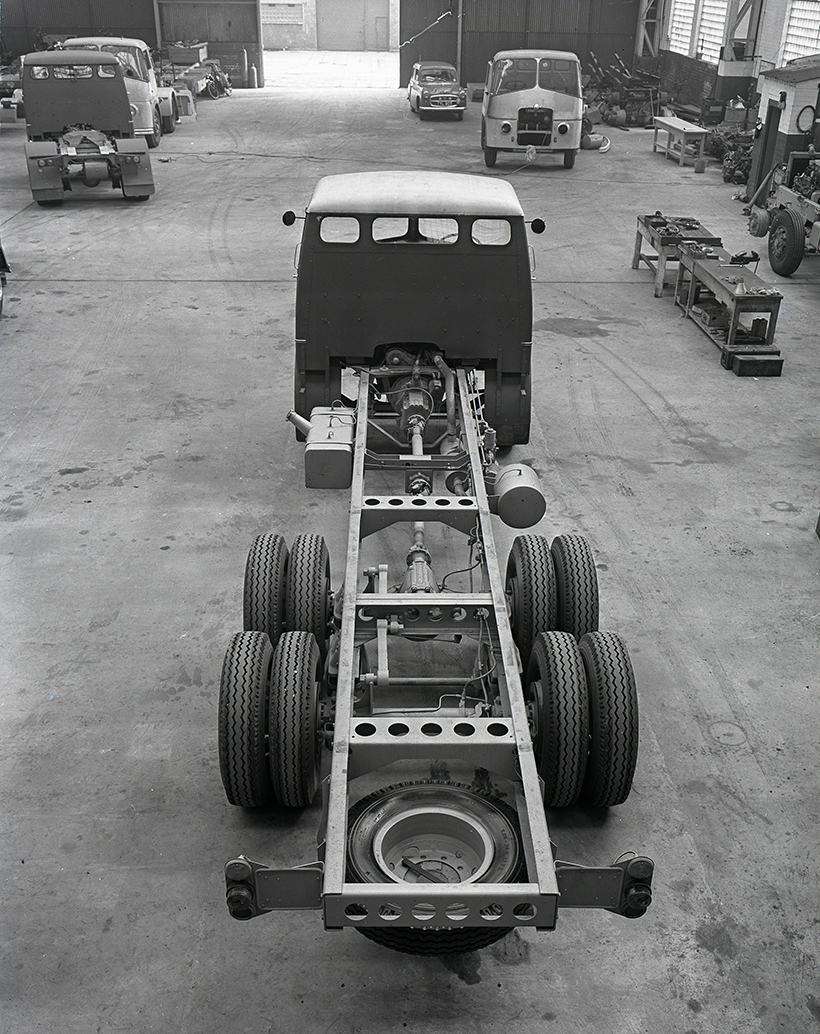 Here’s the inside of TWR’s premises – the initials standing for Transport Vehicles Warrington. When Sentinel failed in 1957, its main UK dealer – North Cheshire Motors – purchased the stock of vehicles and parts, and continued production under the TVW name. Sentinel engines were replaced by Gardner, Meadows, Perkins, Leyland and Rootes diesels, with cabs from Boalloy or Williams of Grappenhall. Around 100 vehicles had been built by the time the company closed in 1961. Here we can see a 6×2 chassis-cab from the rear, glimpse a ‘Chinese-six’ chassis to the right, with three tractor units nearer the door, all with Boalloy cabs, with the CM photographer’s Hillman Husky, TYL 805, by the open door. 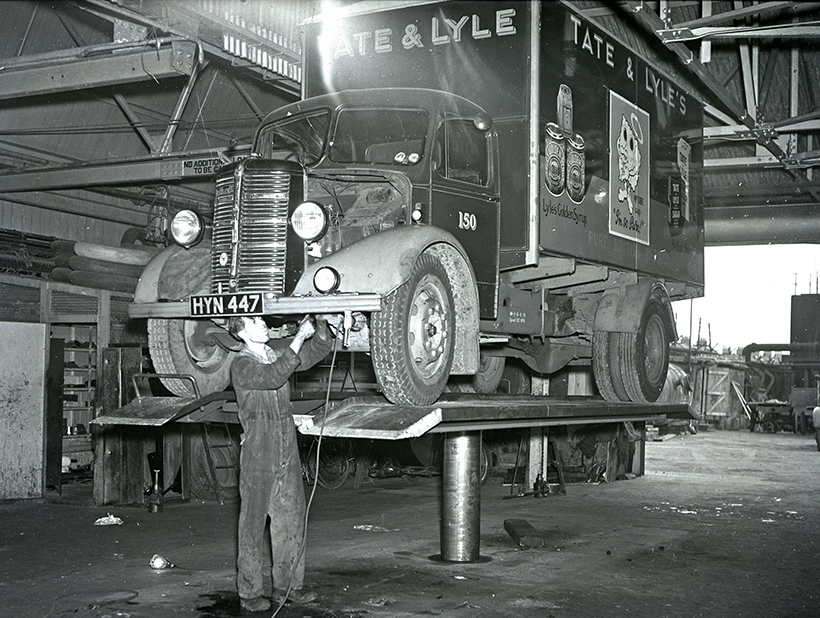 Back to working vehicles, with Tate & Lyle’s Bedford OL box van, HYN 447 (London, 1948) on the ramp, being attended to from below. Hopefully, there was a fail-safe of some sort on those single-ram ramps, as this one would have had a lorry with an unladen weight of three tons or so on it. 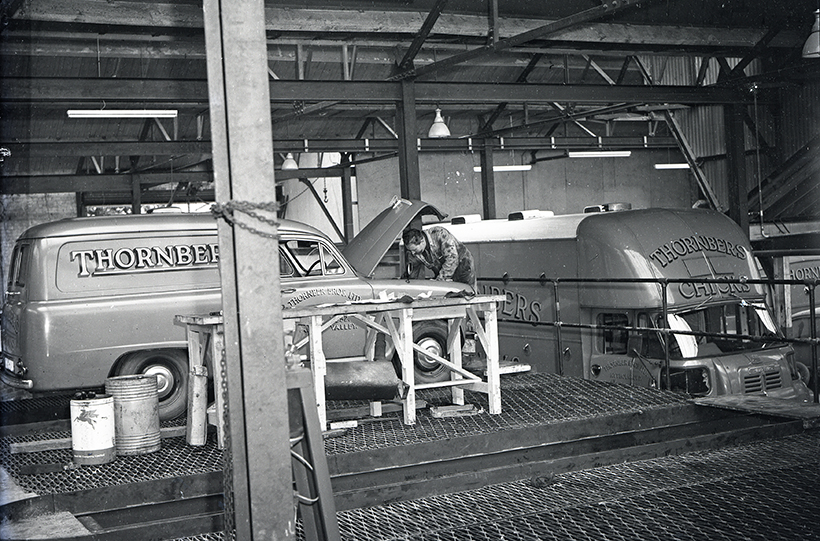 Thornber Bros, which dealt in chicks, laying cages and other supplies for battery hens (believed to have been based in West Yorkshire), seems to have taken advantage of the depot being on a hill to have the workshop area on the upper level, saving the need for a pit or ramp. Here an Austin A55 half-ton van receives attention, while an FG integral van is parked on the lower level. 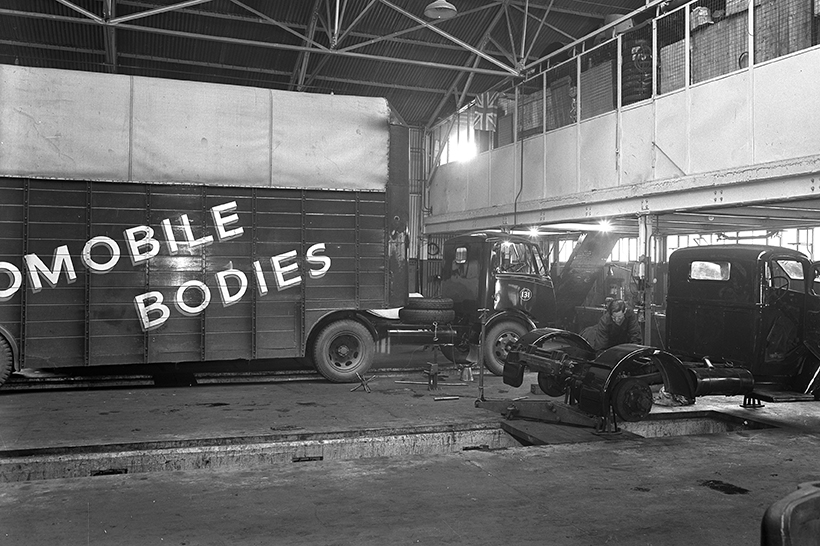 Fisher & Ludlow, the car body manufacturer based in Castle Bromwich, Birmingham, was taken over by BMC in 1953, and merged with Pressed Steel in the late 1960s. The company ran quite a fleet of lorries to deliver the car bodies, predictably using Morris and Austin tractor units, as seen here in the company’s workshops, to pull its large volume trailers. 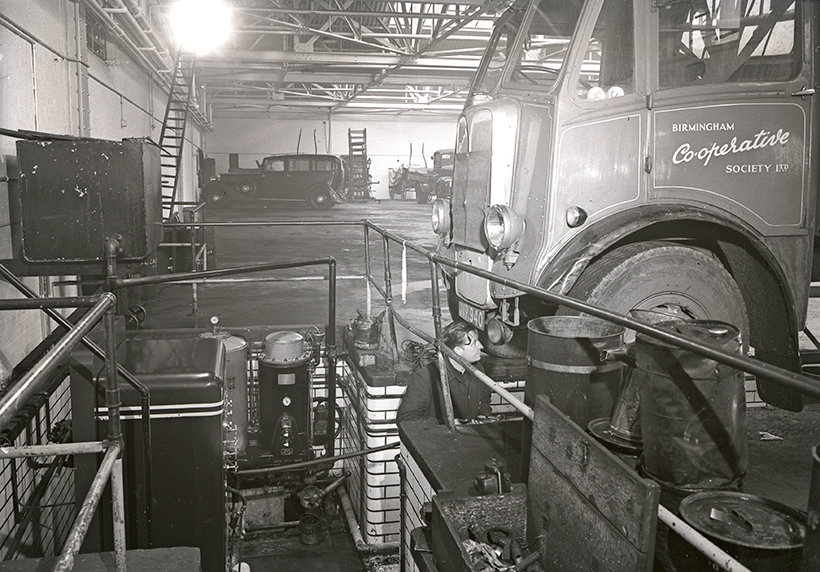 The Birmingham Co-operative Society was typical of the many area Co-op companies in running its own workshops, to maintain its varied fleet of vehicles. Here an AEC Monarch, JVP 940 (Birmingham, 1949), is seen over the smartly-tiled pit area, which looks as if it was in the corner of the running garage, with only a pre-war, ‘D-back’ limousine from the funerals and hire car department, a Ford ET6 and a couple of horse-drawn vehicles for company. 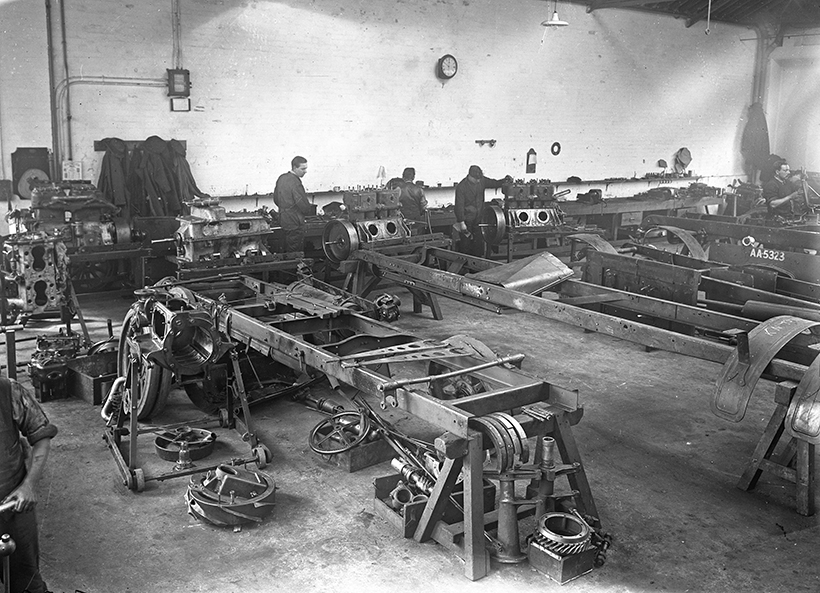 A somewhat damaged negative, but one which is hard to resist. It looks as if the men and the boy were reconditioning World War I lorries – extremely thoroughly – with chassis reduced to their component parts, ready to be built up again as new. We can see a registration on the bulkhead/scuttle on the right, AA 5325 (Hampshire, 1914), various mudguards, five engine blocks on stands and the same number of bare or nearly bare sets of chassis rails. 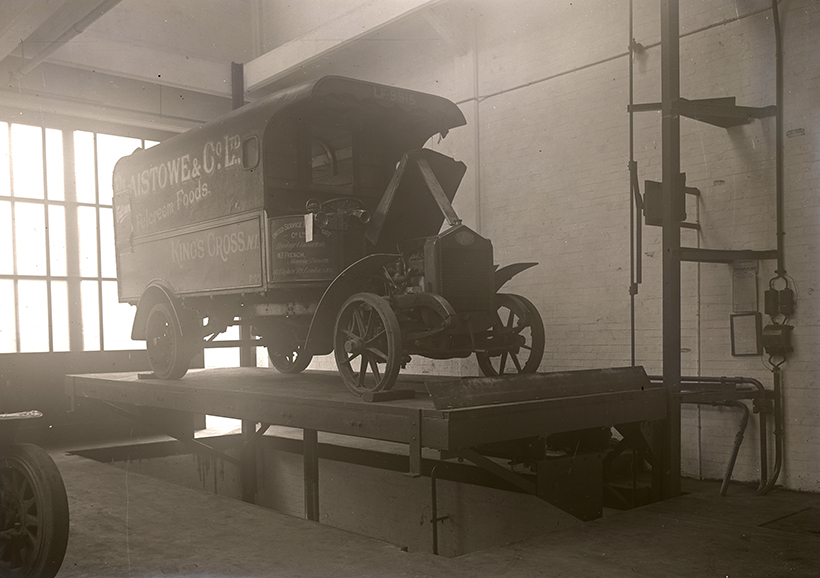 Although the bonnet is propped up, this is again not strictly a workshop view, as the lift looks as if it was to reach the upper floor of the garage, although that might have been the maintenance area, as at the ‘Bluebird Garage’ in the King’s Road, when it was a London County Council ambulance and school bus garage, in use into the 1980s. I hope somebody can identify the make of LF 9915; a van provided on contract by United Service Transport, based in Clapham Road SW9, to Plaistow & Co, ‘Fulcreem Foods’, of Kings Cross. 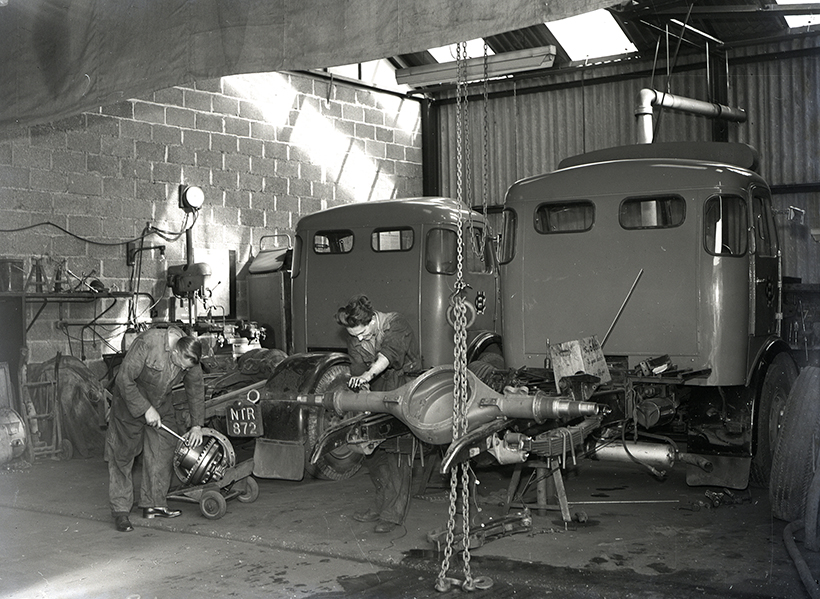 Two Seddon Mk8 tractor units, in the workshops of Christopher Hill, agricultural merchant, maker of Dorset Feeds, based in Poole, including NTR 872 (Southampton, 1955). Its stable mate nearer the camera appears to be having significant work done to its rare axle, with the differential unit removed for attention. 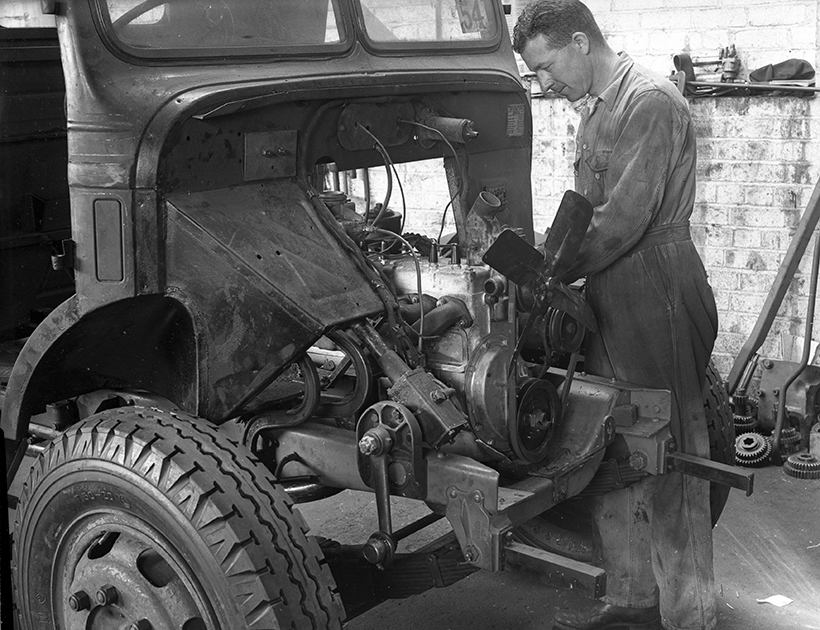 This pre-war-style Dodge looks to be in reasonable condition. Once the radiator, wings, panels and doors had re-fitted, it would have been ready for plenty more work. 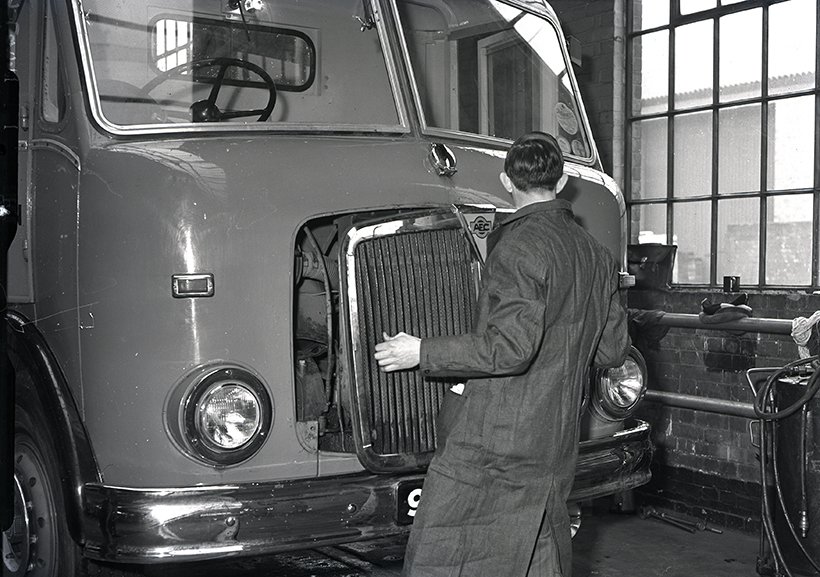 This was the demonstration AEC Mercury tractor unit, 93 DMH (December, 1954), in the workshop for attention, first needing the radiator grille removed from the ‘tin-front’ of its Park Royal cab. 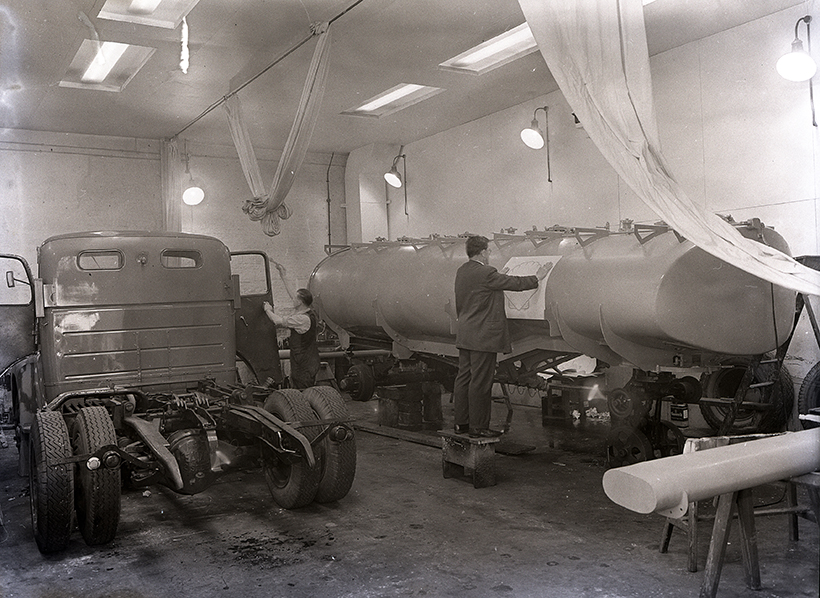 It looks as if a thorough job was being done of painting, or more likely re-painting, this Leyland Comet and its Scammell automatic-coupling, single-axle tank trailer. The man in the suit was offering up the ‘Shell’ transfer, while his colleague painted the door ‘shuts’. Still some way to go before the vehicle was (back) on the road, though. 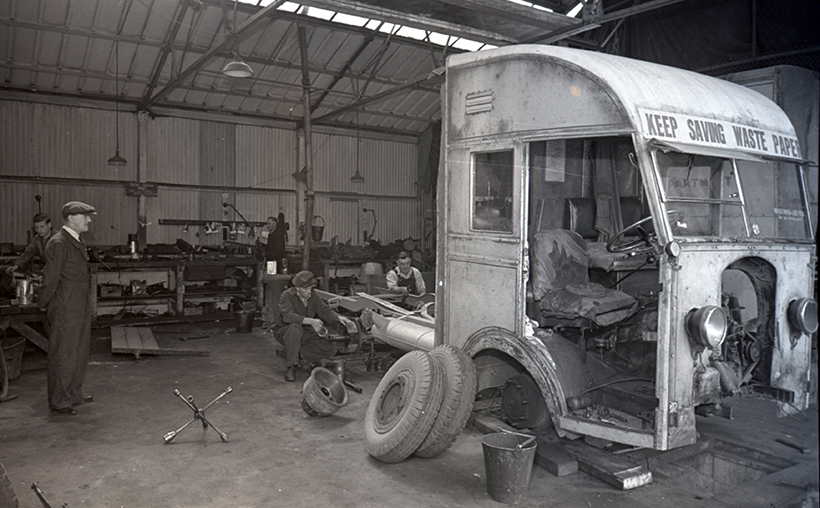 The County Borough of Ipswich Cleansing Department garage now, with another very thorough overhaul, not far from a ground-up rebuild of one of its pre-war Dennis dustcarts. The body has been removed and the cab and chassis stripped down. Accompanying views in the archive show the ‘before and after’, illustrating what a good job these chaps would make of the finished article. 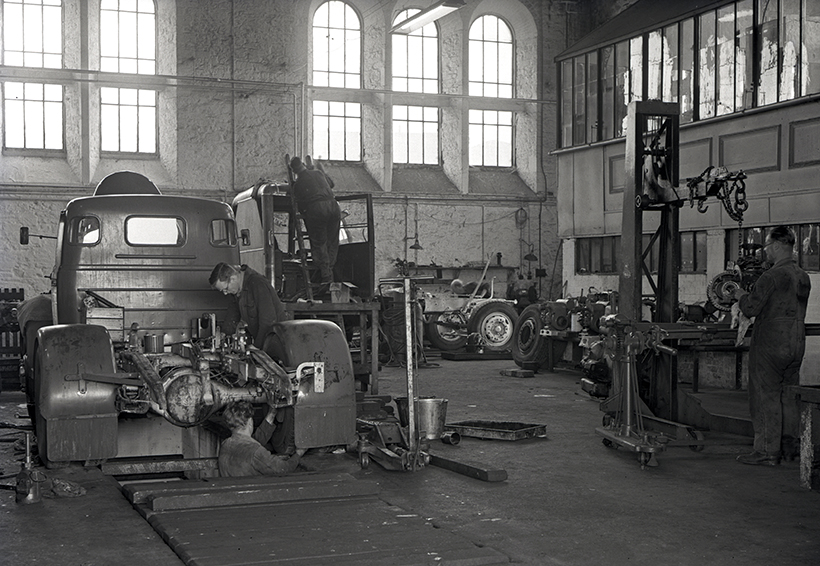 Another view of the business end of a Scammell coupling, on a Commer Superpoise tractor unit, SHT 16, fleet no 315 (as seen in the second picture) being worked on over the pit, plus a glimpse of the front end, beside the AEC Monarch (seen better in the following photograph), HYF 656, thoroughly stripped to a chassis-cab, even to the paint off the cab. Not sure which fleet this was, but they certainly took overhauls very seriously! 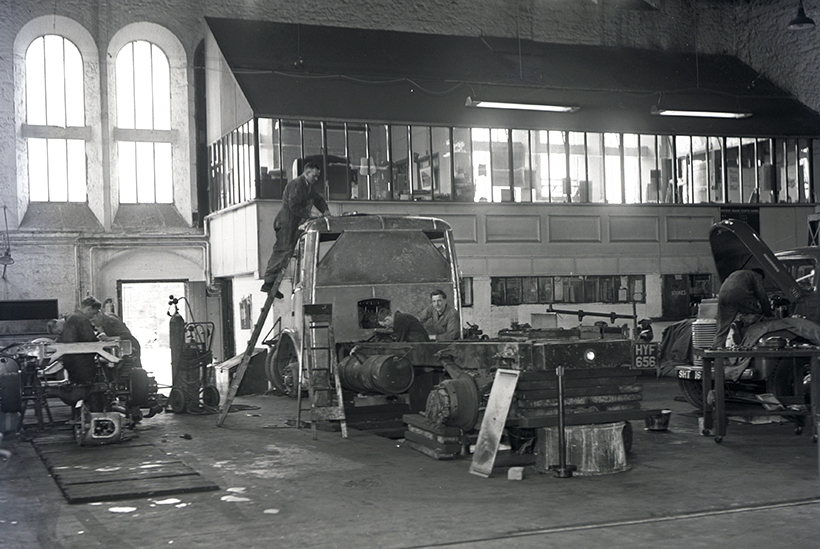 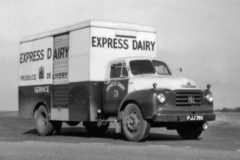 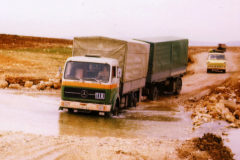 Mercs on the Middle East run