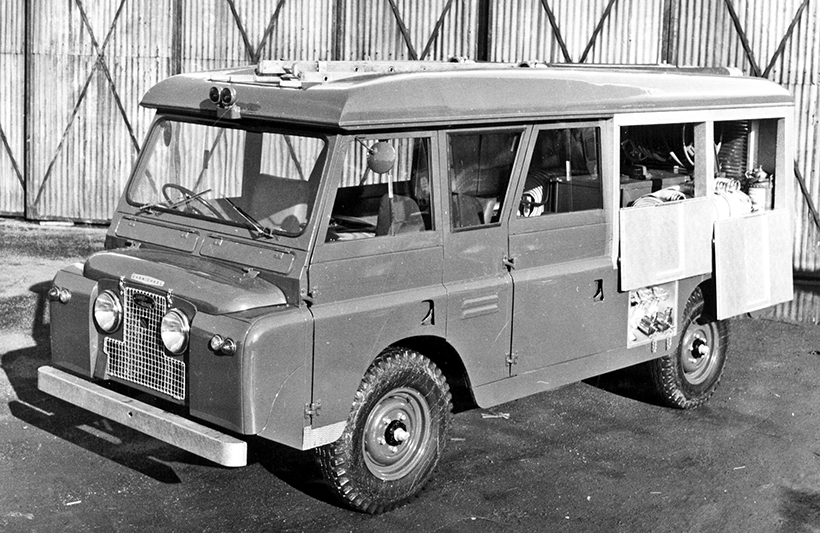 Land Rover-based fire appliances: The Carmichael prototype Redwing FT6 fire engine pictured at the company’s Worcester works. This design kept the body lines almost within the height limits of the standard Land Rover cab. Cheshire Fire Brigade was the first authority to commission this type, and 16 examples saw service with the Army Fire Service. The prototype was sold to Shoreham Airport, and is one of the few prototype fire engines to still survive.

From the introduction of the original Land Rover Series 1 light off-road vehicle at the 1948 Amsterdam Motor Show, this all-rounder – and its successors – gained wide acceptance from many operators. Designed particularly for farm and light industrial use, the vehicle was quickly adapted for a whole multitude of purposes, including fire-fighting duties.

The Land Rover featured a steel, box-section chassis and an aluminium body. The original design offered a single model which, from 1948 until 1951, used an 80-inch wheelbase and a 1.6-litre petrol engine producing around 50hp. A four-speed gearbox from the Rover P3 saloon was used, with the addition of a new, two-speed transfer box. 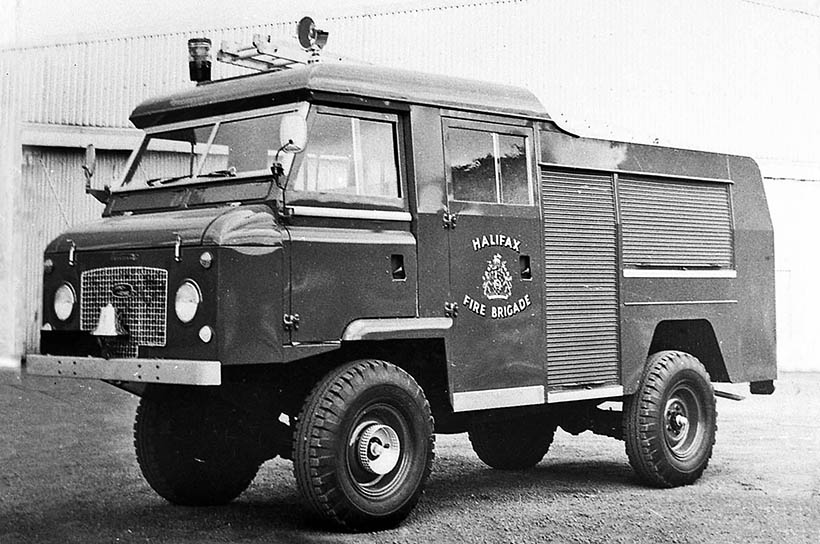 Carmichael’s Redwing FT7 was of a totally different design, and offered a much greater ground clearance, a 150-gallon water tank and the option of the pump being mounted at the rear. Illingworth Fire Station, in Halifax, operated this example. Others went to Bath, Liverpool, Hertfordshire, Warwickshire and West Sussex Fire Brigades.

Fire appliance
Rover produced a fire pump version of the appliance, especially for industrial fire services, where confined spaces in industrial complexes prevented full-sized fire engines gaining access. The vehicle featured a rear-mounted pump driven from the road engine, a 40-gallon water tank and enough hose and equipment to keep a fire in check until the arrival of reinforcements.

Successive models proved equally popular for fire service conversions, with several fire engineering firms gaining authorisation to produce their own versions. By the end of the 1960s, Land Rover fire engines were in operation with many county fire authorities, as well as industrial firms and airfields. 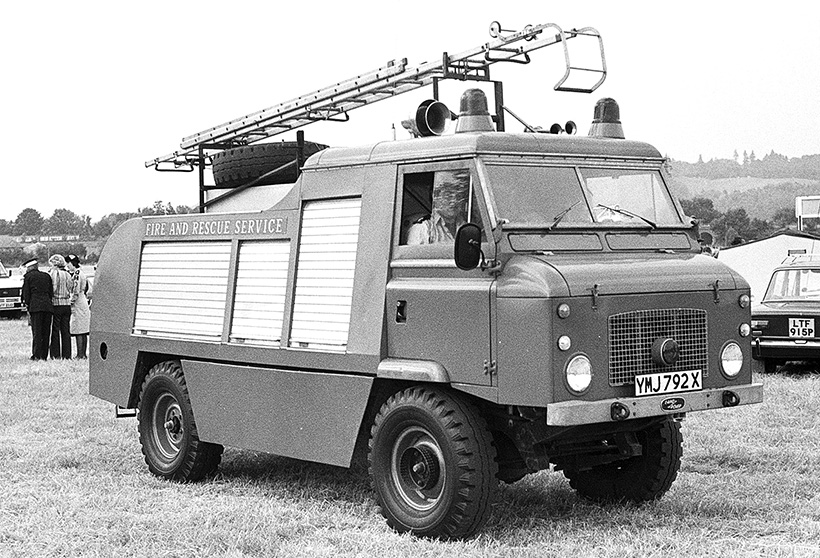 Britain’s oldest fire engineering firm, Merryweather & Sons, built only a few fire engines on Land Rover’s forward-control chassis. This one was one of two built to order for Jersey Fire Service, in the Channel Islands. (Pic: N Tarling)

In 1961, a major departure from the traditional design of the normal control Land Rover occurred, with the introduction of a forward-control vehicle based on the Series II 109-inch wheelbase chassis. The cab, being positioned over the engine, resulted in a greatly increased load space. The result was a vehicle capable of carrying 30cwt on roads and countryside tracks and, and up to 25cwt across the roughest terrain – twice the capacity of a conventional Land Rover. 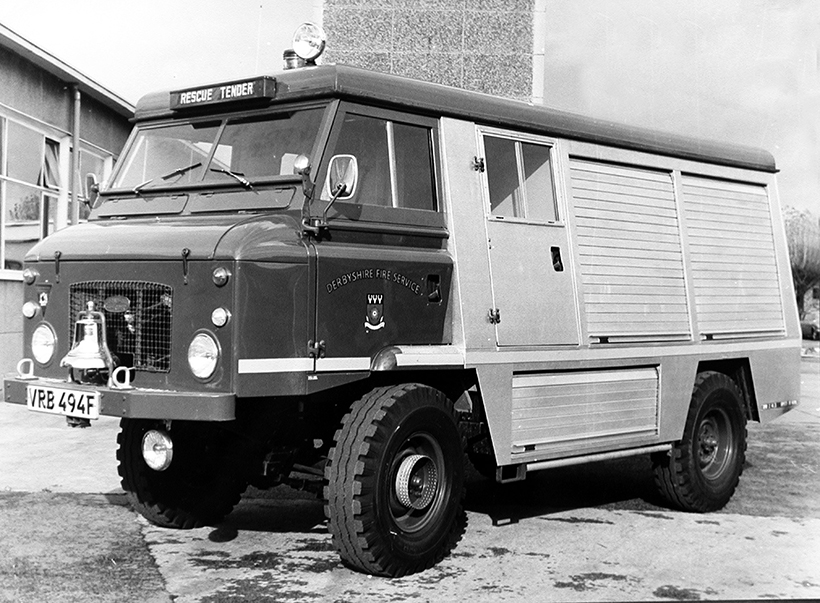 It was not long before Britain’s fire engineering firms saw the advantage of the larger capacity Land Rover and, in 1961, Carmichael & Sons of Worcester, exhibited the fire engine conversion at the Margate conference and exhibition of the Chief Fire Officers Association.  ‘Redwing’ was the designation of Carmichael’s Land Rover fire engine, and this new one was designated the ‘Redwing FT6’.

Mini fire engine
Fitted with aluminium body sides and a glass fibre roof, the prototype vehicle was a mini version of a conventional fire engine, with built-in pump, of which three types were offered – a German KSB, and two types of Coventry-Climax pump, with capacities ranging from 350 to 500 gallons-per-minute. The units were shaft-driven from the Land Rover’s standard, centre power take off gear. 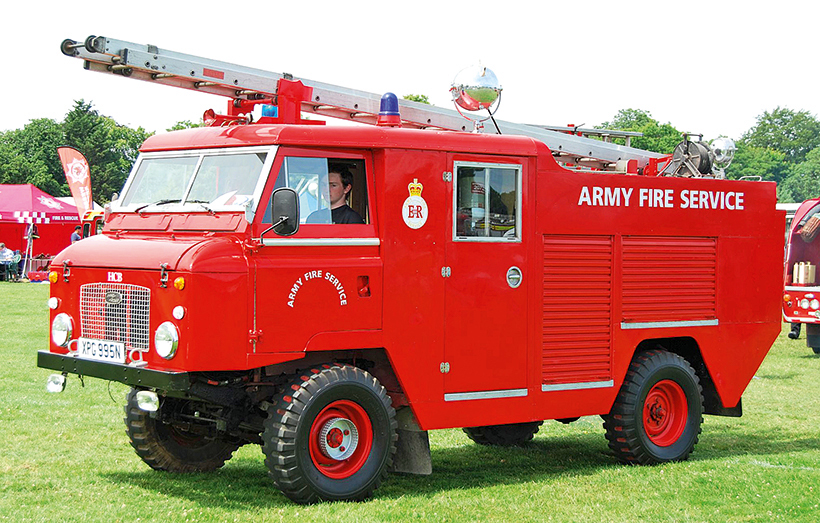 HCB-Angus of Totton, Southampton, built 70 of these ‘Truck, Fire-Fighting 1¼-ton 4×4 Rover’ light fire engines for the Ministry of Defence, for operation with the Royal Air Force and Army Fire Service. They were used at bases both at home and overseas for ‘domestic’ fire-fighting – that’s fires not involving crashed aircraft.

Accommodation was provided for a four-man crew plus equipment, including a 140 gallons water tank and a 120-foot hose reel. On the roof, ladders up to 35 feet in length, could be carried. A futuristic machine at the time, the prototype was evaluated by Commercial Motor magazine and, after a period of demonstration duties, was acquired by Brighton & Hove Airport for use at its Shoreham site. Interestingly, this appliance appeared on an internet auction site in January, 2021.

As well as the standard fire engine, specialised versions, equipped with dry powder and foam extinguishing equipment for airport fire services, were offered. Cheshire Fire Brigade promptly placed an order for four units, followed by a further four, but few other local authority fire services took up the option of these vehicles, instead continuing to prefer the traditional, normal-control version. 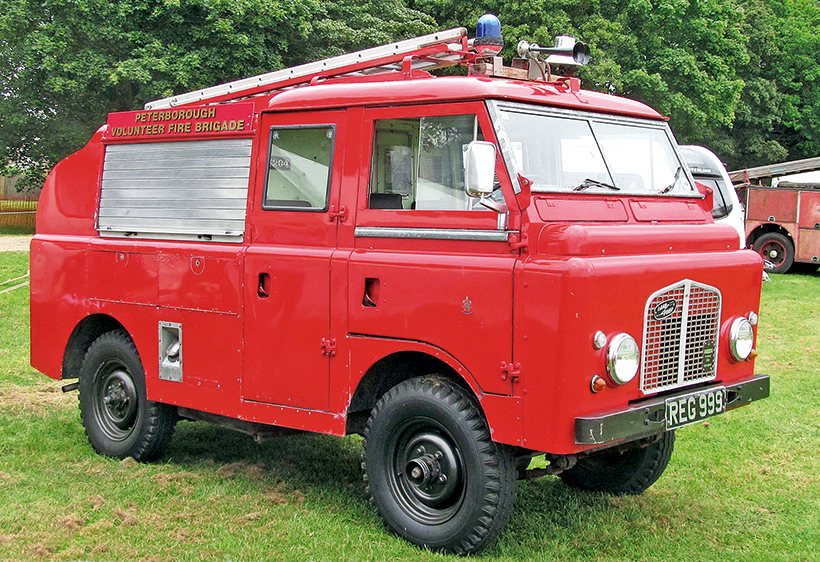 An oddball; this is one of two built by Dennis Bros, of Guildford, based on an original Alfred Miles design. Initially operated by Baker Perkins Ltd of Peterborough, this one still survives. The other unit went new to Strathleven Bonded Distillery, in Dumbarton.

A few were sold overseas, to fire brigades in Malaya, New Zealand and Trinidad. The biggest single order came from the Ministry of Defence, for 16 examples for use by the Army Fire Service. Carmichael later produced a Redwing FT7 model that was built on the same chassis, but featured a totally different design. It was offered with rear-facing seats for the crew and a slightly larger water tank, with an option for the pump to be mounted either amidships or at the rear.

Several other established fire-engineering firms, including Alfred Miles and Pyrene, undertook a few conversions, as well as a few firms not usually connected with fire engine modifications, which produced a few vehicles. These included Isle of Man company Crosby, Cain & Kemmish, which supplied three for the island’s fire service. 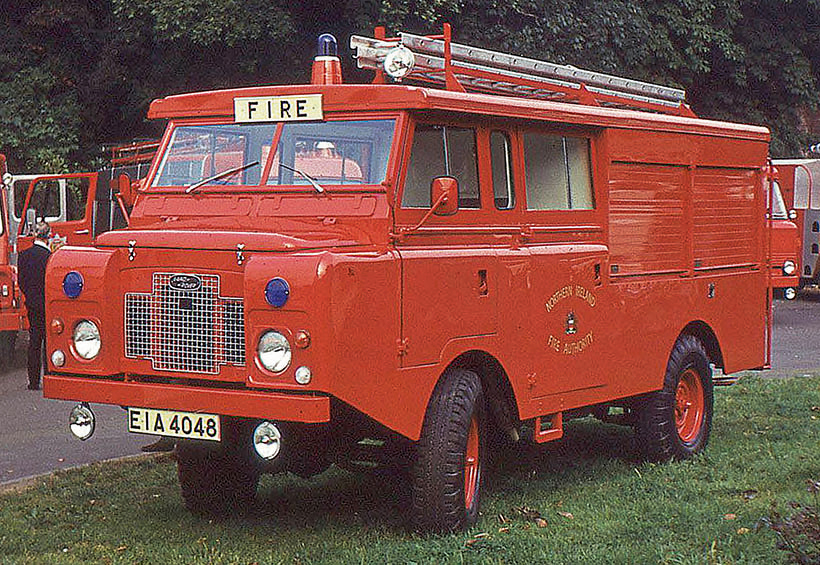 Coachbuilders, Bates of Evesham, a firm not usually connected with fire appliances, supplied 48 of these machines to the Northern Ireland Fire Authority, for service at the province’s part-time fire stations. In the UK, Teesside Airport operated a rescue vehicle built to a similar design.

Particularly unusual was a batch of five Carmichael machines equipped as rescue tenders and light pumping appliances, which featured the builder’s own front assembly and body. Several private and industrial fire brigades bought Forward Control Land Rovers but, compared with the conventional model, they remained a rare breed with Britain’s public fire services. 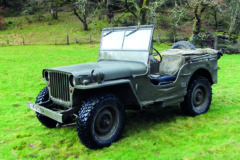 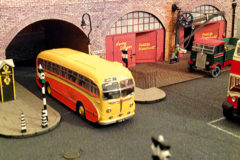