Keith Haddock tells the Manitowoc crane story; the history of one of America’s most successful crane and excavator manufacturers. 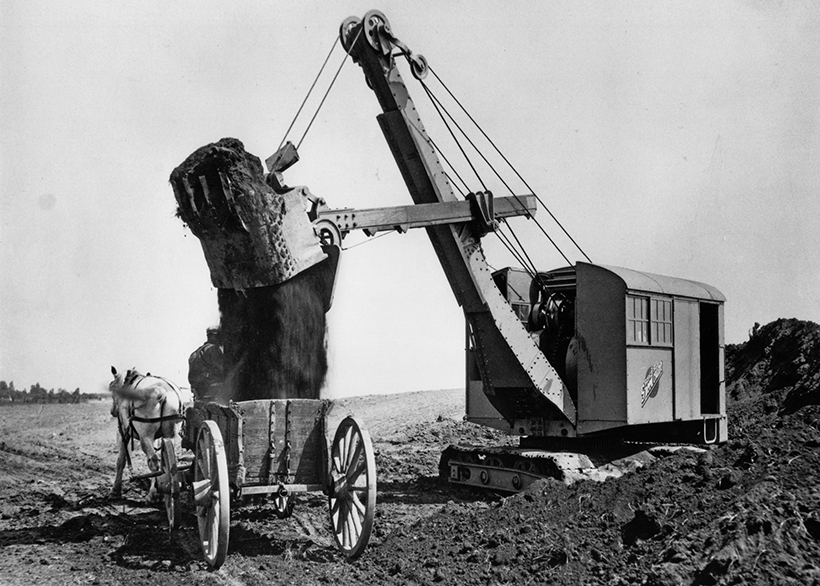 The Manitowoc crane story: Acquiring the rights and patents of the Moore Speedcrane Company is what first drew the Manitowoc Shipbuilding Co into the crane and excavator business.

More than 100 American crane and excavator manufacturers established themselves in the 20th century, and yet only the names of three of them can still be found on machines still being sold today. The three surviving names are Link-Belt, P&H and Manitowoc. Link-Belt is Japanese-owned and P&H machines are manufactured by Komatsu Mining Corporation; a subsidiary of Japanese giant, Komatsu Ltd. That leaves Manitowoc, the only American crane and excavator company that survives as an American-owned company, and still proudly carries its name on its products. This is the Manitowoc crane story. 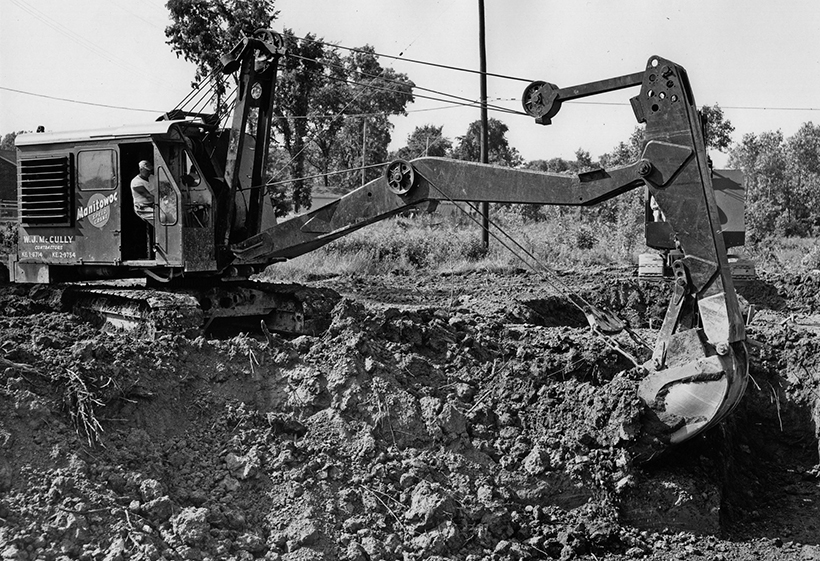 Local rootes
Like many other American excavator and earthmoving equipment manufacturers, the company took its name from the city where it was established, in this case Manitowoc, in Wisconsin. Others include Bucyrus, Erie, Bay City, Lima, Lorain, Marion, Cleveland, Euclid and Galion to name a few. Many of these were located on the shores of the Great Lakes, where easy access to shipping was available.

The Manitowoc Company, Inc. was founded in 1902 by Charles West and Elias Gunnell, in the lake-shore community of Manitowoc, Wisconsin. It was originally known as a shipbuilding and ship repair company, operating under the name ‘Manitowoc Dry Dock Company’ then, from 1910, Manitowoc Shipbuilding Company. It gained a well-respected reputation for building all kinds of small to medium-sized ships including US Coast Guard patrol ships and many car ferryboats. 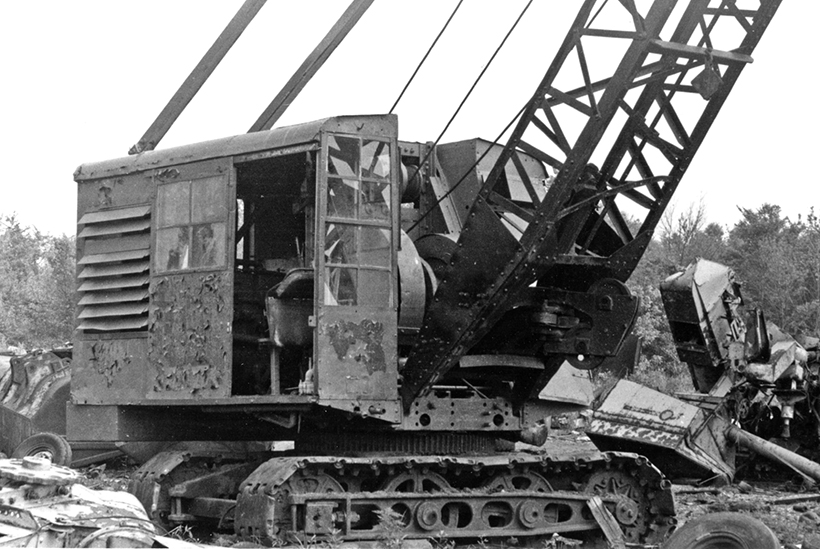 In 1932, Manitowoc introduced the model 1500, based on the 1¼-yard Moore Speedcrane. It was the first machine to display the now-familiar, four-digit (later, five) numbering system.

In 1914, following the outbreak of World War I, British and Norwegian shipping lines placed orders with Manitowoc for ocean-going freighters to replace those sunk by German U-boats. Then, in 1917, the entire capacity of the company was taken over by the US government to supply freighters to the Emergency Shipping Board. This resulted in 33 3,500-ton freighters supplied during World War I.

After World War I, and completion of the large government orders, Manitowoc Shipbuilding Co. found itself with an enlarged, modern factory but very little work. So, for the following few years, the company began to diversify into other activities, including repair and maintenance of railway locomotives and rolling stock which had suffered through lack of maintenance during the war. Other work included the manufacture of paper mill machinery and large industrial boilers. 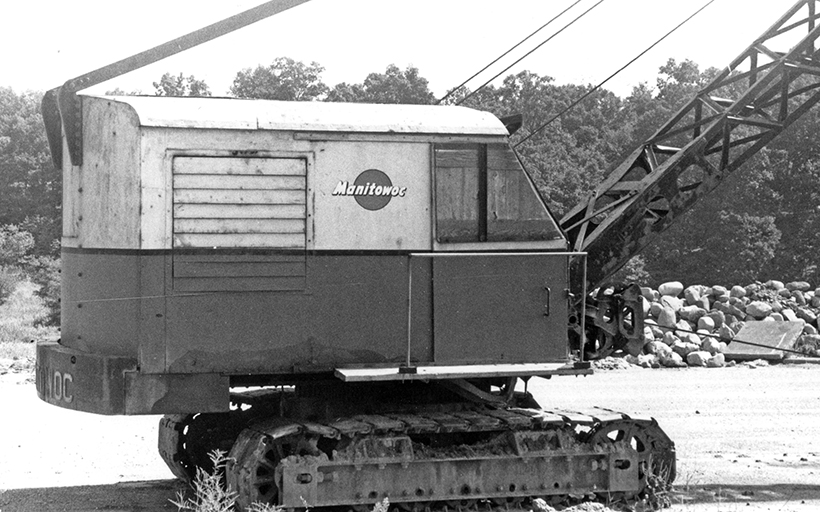 The Moore Speedcrane
In 1925, continuing its efforts to find new products, Manitowoc agreed to manufacture a new type of mobile crane invented by the Moore Brothers, called a ‘Speedcrane’. This machine was being built by the Moore Speedcrane Company at Fort Wayne, Indiana, but constant design changes and poor marketing contributed to increased financial problems for the company. So, in 1927, Manitowoc took control over manufacture and sale of the Speedcrane, paying royalties to the Moores until their patents ran out. The two brothers continued to work closely with Manitowoc on development of new designs. This was the start of Manitowoc in the crane business, a product that would eventually dominate all others and become the company’s sole business.

The first Speedcranes were steam-powered, four-wheel traction cranes with 15-ton capacity or a ¾ cubic yard bucket. Manitowoc built 10 of these steam cranes. Steam was still popular, but oil or petrol power was gaining acceptance because it required less maintenance. To meet the growing demand Moore redesigned the crane to allow for petrol engine installation, and called it the ‘Model 100’. 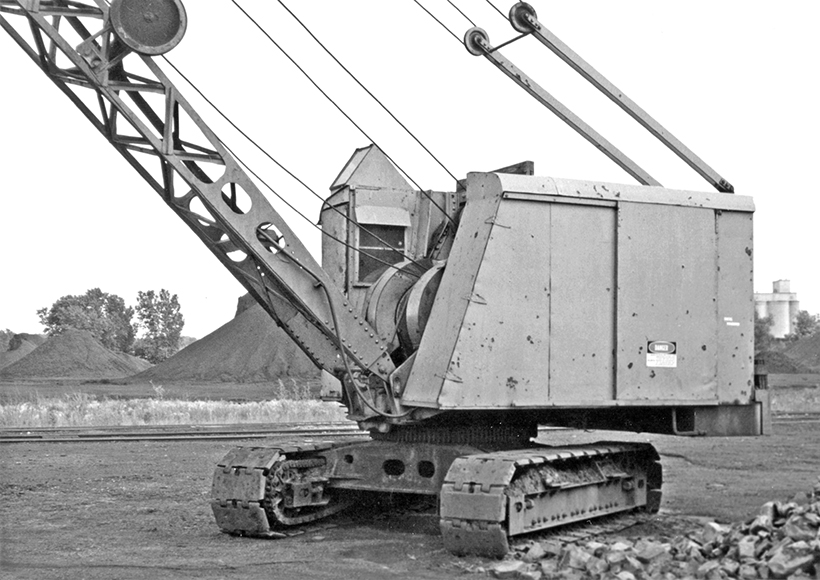 By 1927, with Manitowoc in full control, the model 125 Speedcrane was introduced as a full 1¼-yard crawler-mounted excavator, or 20-ton crane with optional steam power, petrol, diesel or electricity. It also carried a cast-steel car body in place of the riveted type that had been used previously. But, just when business was starting to improve, the Great Depression of 1929 hit and, for the following four years, very little product development took place. To survive, the company reduced wages and staff, cut costs, liquidated inventory and only built cranes to order.

Excavator line expands
In 1932, two larger models were announced  – the 150 and 175 of 1½ and 1¾-yard capacity – but their model numbers were almost immediately replaced with new numbers 3000A and 3000B respectively. The new, 4-digit (and later 5-digit) numbering system remains today.  The earlier model 125 became the 1500. The Model 3000A was the first crane that was more than a reworking of the original Moore Speedcrane. It was designed to handle a 1½-yard bucket, and was crane-rated at 26 tons. A modified, larger version resulted in the 3000B, with 1¾-yard bucket and 32-ton crane capacity. 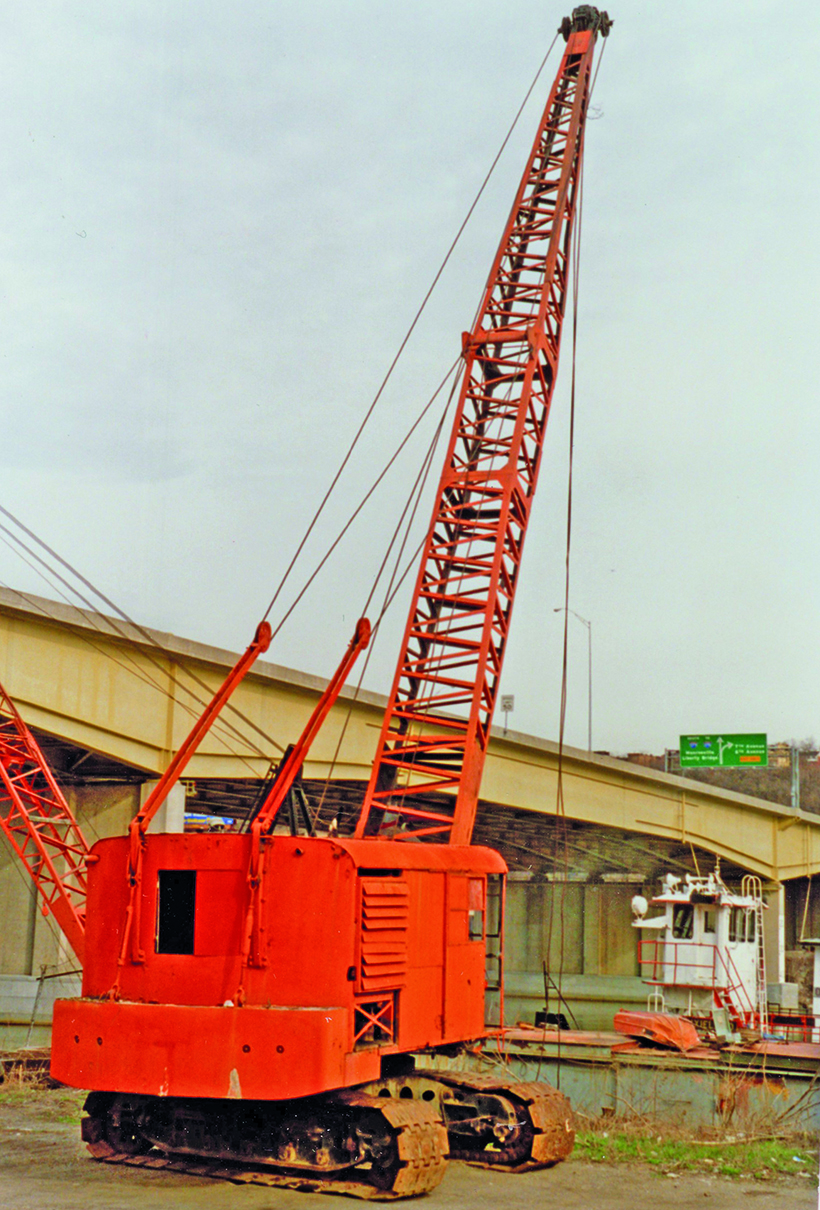 The model 3000, first appearing in 1933, boasted many improvements over earlier models based on the Moore Speedcrane.

The 3000 models were convertible to shovel or dragline, and incorporated a new, patented back hitch, where the boom hoist cables were hitched to the back of the house via a frame attached to the counterweight. When disconnected, the heavy counterweight could thus be lowered to the ground by the boom hoist cables. The shovel boom was a welded tubular structure, claimed by Manitowoc to be more resistant to twisting than a box-section. The chain-driven crowd mechanism drove the shipper shaft with two pinions meshing with the twin dipper handle racks. Unlike most shovels of this type, the racks faced upward with the pinions on top. The advantage of this is that, when the dipper teeth dug into the face, the racks were forced upwards to better mesh with their pinions. It also reduced friction and wear on the saddle blocks.

In 1936, the former 1¼-yard model 1500 was upgraded to the 2000, with the same capacity but receiving similar revised features as on the 3000 models. The larger 3500 arrived in 1938, primarily designed as a long-boom stripping shovel. It could carry a two-cubic yard dipper on a 45-foot boom, and became a popular choice with contractors stripping coal in the relatively shallow seams found in Ohio and Pennsylvania. Later, 27-foot and 35-foot booms were offered, with rating increased to 2½ cubic yards. 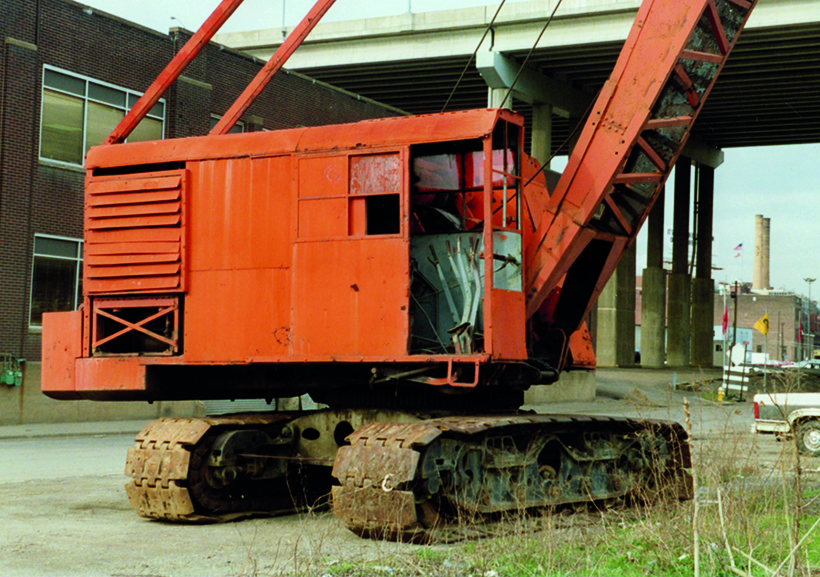 The 3000A was rated at 1½ cubic yards as an excavator, or crane-rated at 26 tons. The machine shown here has mechanical controls, but air-control was available as an option.

As a dragline, it could carry a 2½-yard bucket on an 80-foot boom, and its crane rating was 60 tons at 12-foot radius. In 1939, the first model 1600 of similar design was sold as a 1 cubic yard excavator convertible to a crane with 20 tons lift capacity. With that latest addition in the years leading up to America entering World War II in 1942, Manitowoc was offering a modern line of cable excavators in six popular sizes, ranging from 1 to 2½ cubic yards capacity.

Throughout the years between the two World Wars, Manitowoc’s shipbuilding continued at a reduced level, but its reputation for building reliable, high-quality ships remained high, so it was not surprising that the company was awarded major contracts to build submarines for the US Navy. As World War II began in Europe, the United States launched a rearmament programme, and Manitowoc was contacted and investigated for its capability to build these important vessels. The submarine was a difficult vessel to build because of the complexity of its mechanisms, intricate structure and high standard of construction that went far beyond that of a surface vessel. With nothing like this being built before in its shipyards, Manitowoc took the risk, and was proud to be awarded an initial contract for 10 submarines. The first of these was launched in April 1942, and further contracts produced another 18 submarines. 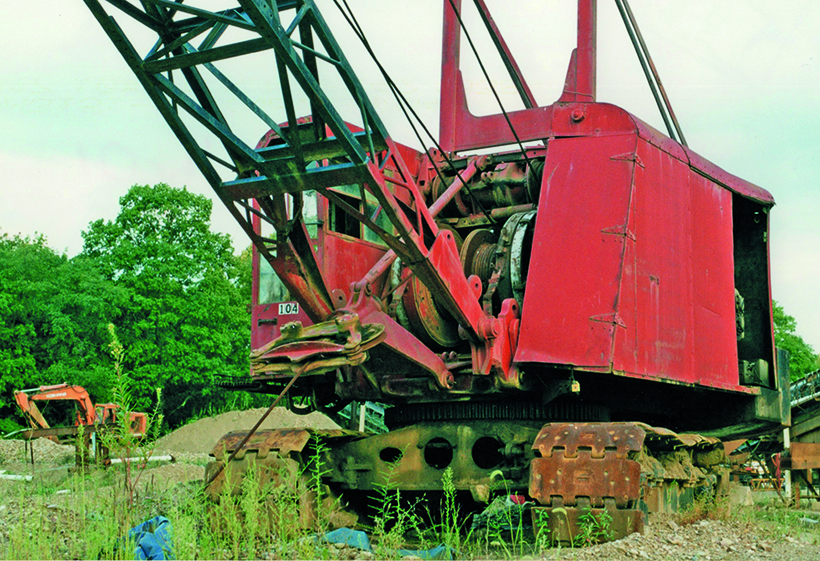 Another Manitowoc 3000 shows the fairlead arrangement and twin hoist and drag drums.

During assembly of the submarines in 1941, a number of 60-ton sections had to be lifted and placed with precision at a lengthy radius. So, needing a special crane, Manitowoc engineers upgraded its existing model 3500 design with modifications including a larger-diameter roller path and extended crawler base to suit the required lifting capacity. This became the model 3900, primarily marketed as a heavy-duty lift crane.

During World War II, Manitowoc also shipped six model 3000 lift cranes to Pearl Harbour for clearing and salvaging the sunken ships. Before the war ended, it shipped 58 of its cranes to the US Navy for use on floating dry docks, and a further 25 shipped for mounting on barges. The US Army also received 116 model 2000s and 79 model 3000s as part of its war effort. 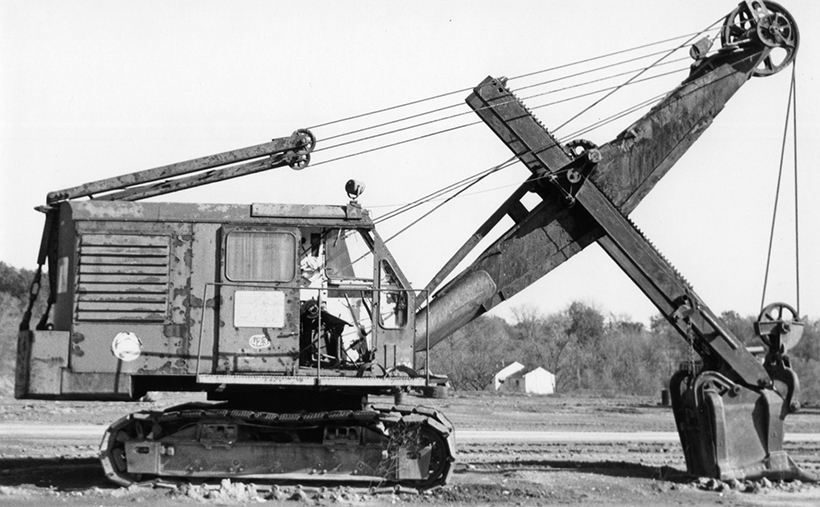 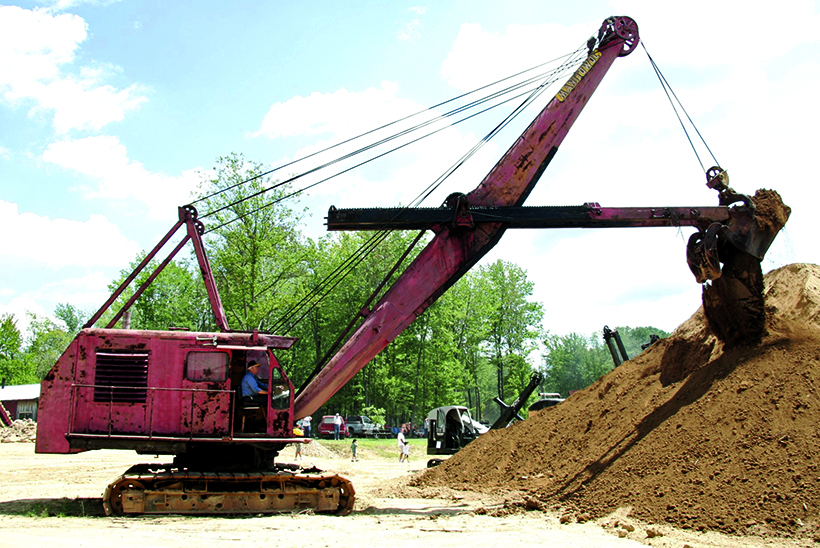 Three lengths of shovel boom were offered for the 3500 shovel, which first appeared in 1938, primarily designed as a long-boom stripping shovel. This machine, demonstrated at an HCEA event in Pennsylvania, sports the mid-range boom that’s 35 feet long. 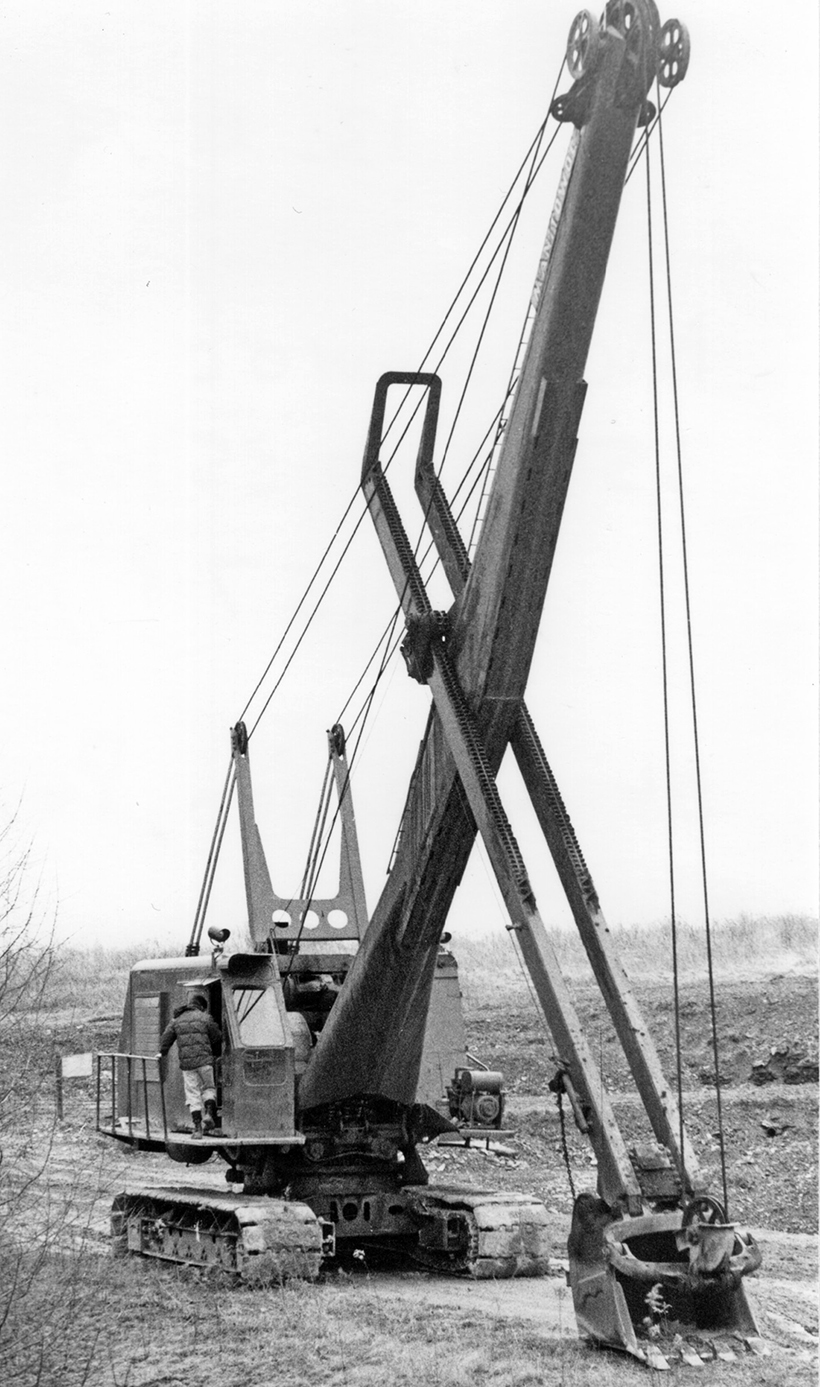 This is the stripping shovel version of the 3500, boasting a boom that’s 45 feet long. These machines were popular in the coal stripping areas of Ohio and Pennsylvania. 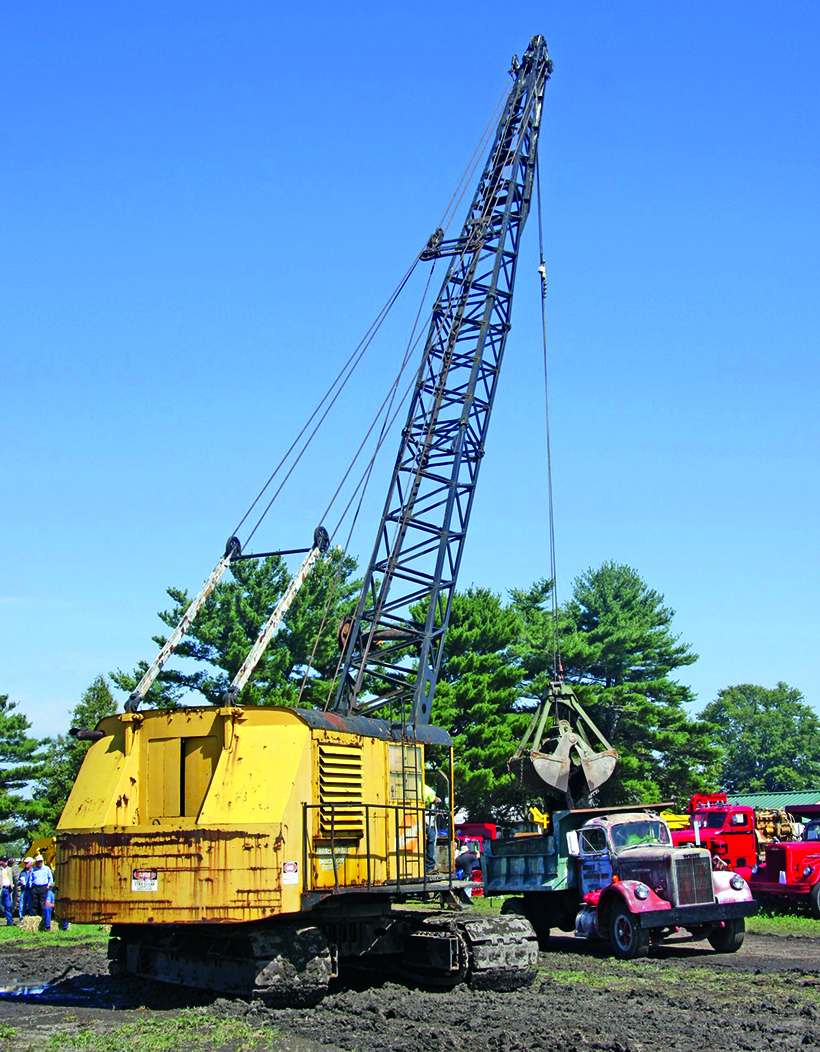 Here’s the 3500 owned by the Historical Construction Equipment Association (HCEA), being demonstrated in 2016 at its headquarters in Bowling Green, Ohio, with clamshell (grab) bucket loading a White truck. 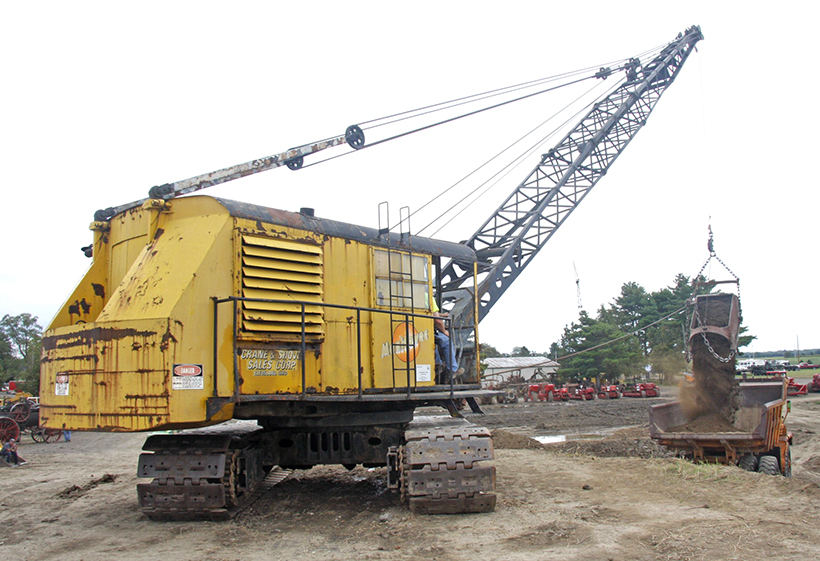 At the HCEA’s annual event in 2019, at Bowling Green, Ohio, the 3500 had been converted to a dragline, and gave an excellent performance. 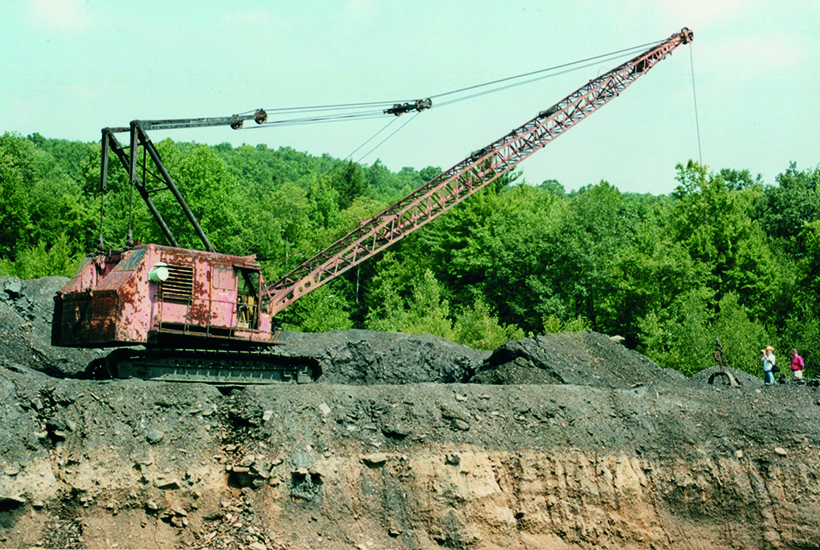 The model 3900 was first built in 1941 for Manitowoc’s own use to assist in the erection of 28 submarines for the US Navy. Initially marketed as a heavy-duty lift crane, it was later offered as a 4-cubic yard dragline, as shown here. 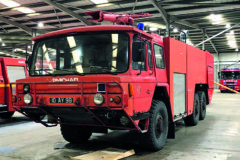 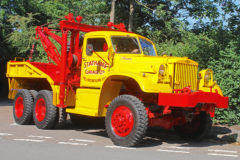