Alan Barnes recounts the fascinating story of the Sentinel Roadless Tractor; a machine that deserved so much more commercial success.

The Sentinel Roadless Tractor grew out of the success that Sentinel enjoyed with the Super Sentinel Steam Waggon, introduced in 1923. The company stated in a sales brochure that: ‘When this work was completed and the Super Sentinel boiler and engine were accomplished facts, we found that in these two units we had far surpassed anything that had hitherto been done in the realms of steam motor engineering. 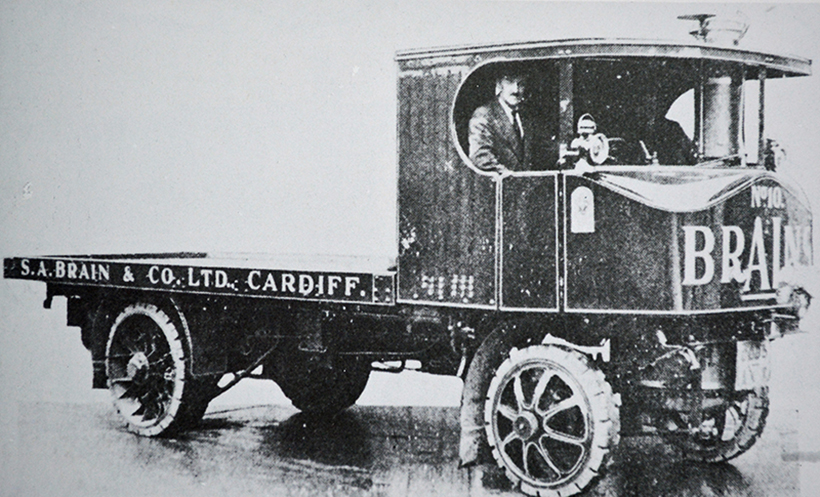 We had produced a generator of such outstanding merit, and an engine of such extraordinary power, compactness, simplicity and hardiness, that we were quickly forced to realise that the sphere of usefulness of these components could be extended far beyond the purpose for which they were originally designed.’ 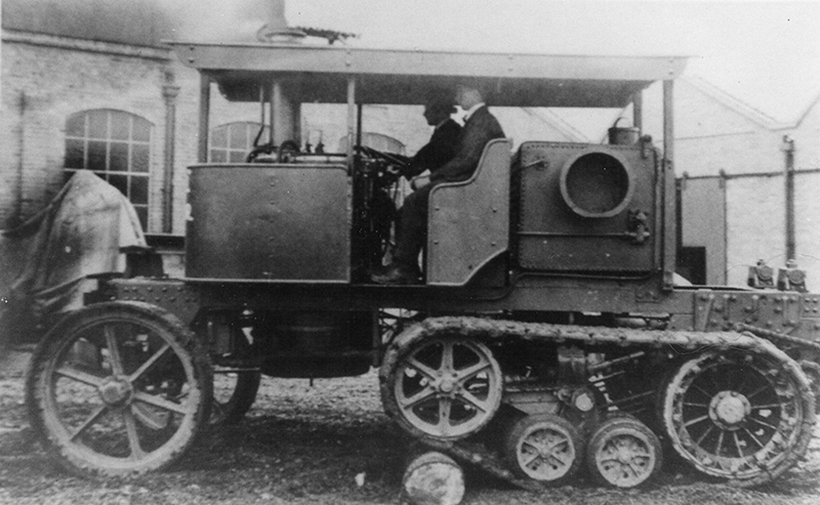 Rapid development
The company lost no time in developing a Super Sentinel Tractor, as the next stage of the development project; a machine which the company later stated, ‘proved to be better than expected. The Super Sentinel Tractor has now been marketed for over a year, and many of them have already gone abroad and are doing excellent work in the Dominions, as well as foreign countries.’

Not content to rest on their Super Sentinel laurels, the company began to explore further applications for the tractor by building a machine with true off-road capabilities, capable of rough-terrain working. It turned to Roadless Traction Ltd with a view to developing a tracked version of the Super Sentinel Tractor. 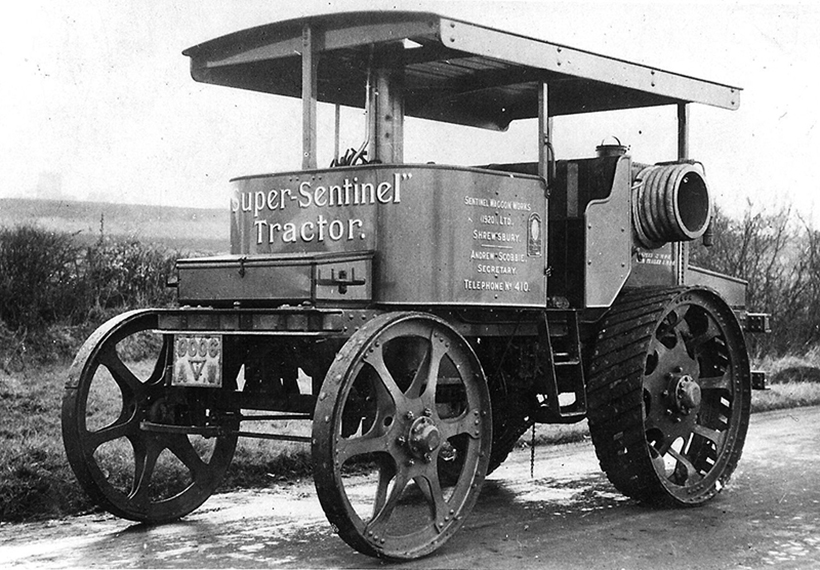 It was hardly surprising that Sentinel sought a relationship with Roadless. During the First World War, there had been much development work on the use of tracked systems for military vehicles and, since that time, Roadless had established a well-deserved reputation for quality engineering and innovative products.

As Sentinel stated: ‘There are, today, a great many vehicles in existence employing different track systems but, in searching for the best upon which to mount the Super Sentinel Tractor, we found that those manufactured by Roadless Traction Ltd far surpassed anything that had ever been done.’ 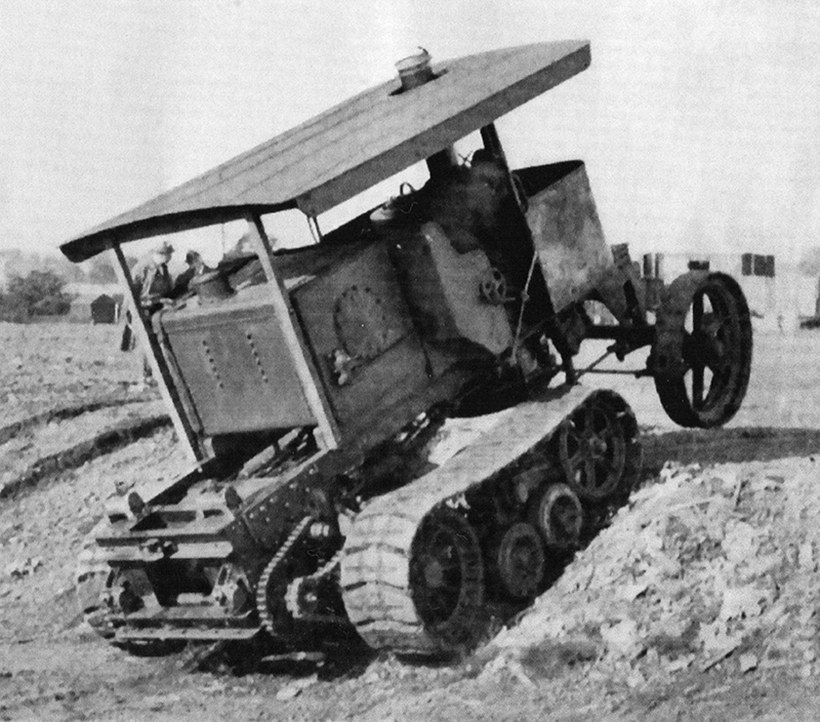 This is believed to be No 5794, seen during a works demonstration. (Pic: Anthony Thomas Collection)

There were three outstanding points of merit associated with the use of the Roadless system: 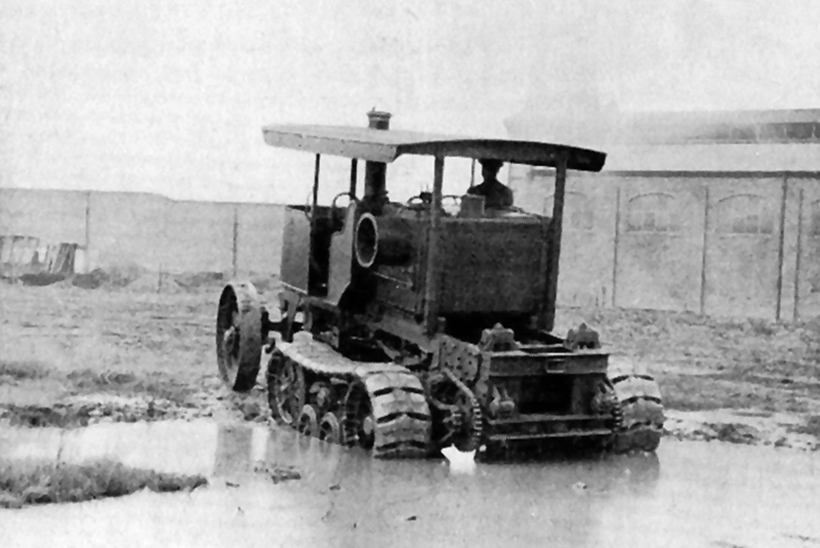 Front-mounted boiler
The basic design was broadly similar to the Super Sentinel Tractor, with the boiler positioned at the front, just behind the front wheels. The engine was mounted immediately over the centre of the tracks and, above this was the water tank and large coal bunker, which optimised weight distribution. The front wheels were lightly loaded to prevent digging-in on soft ground, while the maximum weight was concentrated on the tracks themselves and to take advantage of the ample bearing surface to enable the machine to cope with the worst of ground conditions. Designed primarily for overseas use, a full canopy was provided to give some protection from the tropical sun, while ‘comfortable’ seats were arguably a bonus.

The front axle was simple yet strong, with a rectangular forging to take the usual stub axles of Ackerman steering. As the brochure described: ’The front axle is constrained to move in a vertical direction by means of two, strong hornplates on either side of the chassis. It carries the forward part of the chassis through a transverse spring and, by this means, the chassis is given a three-point suspension.’ This allowed a great deal of independent movement, without transmitting any additional strain to the chassis. 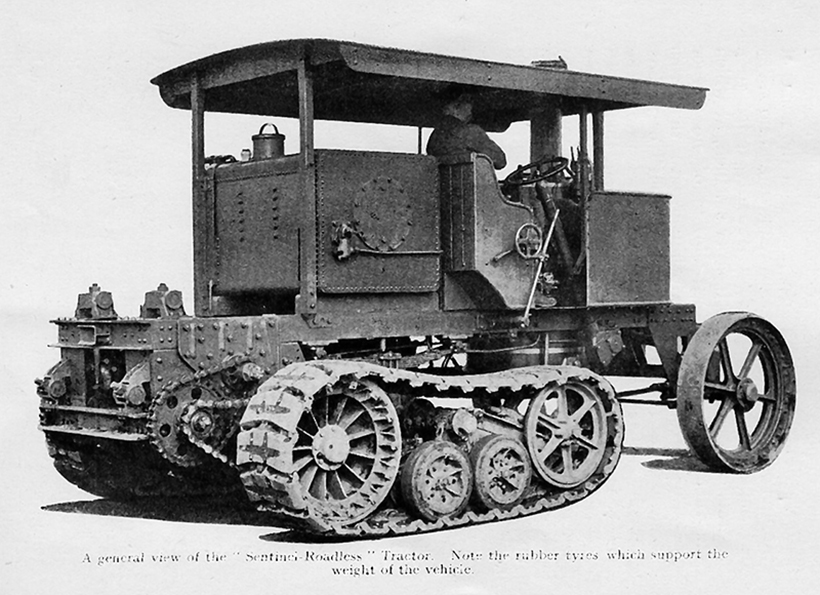 The Sentinel Roadless Tractor was essentially a half-track design, with the front wheels being retained for steering. The entire weight of the vehicle was carried on rubber tyres, with the driving sprockets and track-carrying idlers also being shod with rubber to minimise vibration.

Roadless track positives
Sentinel identified the following points of merit, as far as the use of the Roadless tracks were concerned:

The track links were made of high-tensile, forged steel, and were hollow to provide lubricant chambers, with the driving teeth rising from the centre of the reservoir. The links were electrically-welded to steel shoes, which formed paths on either side of the links, and the rubber-tyred rollers ran on these paths. 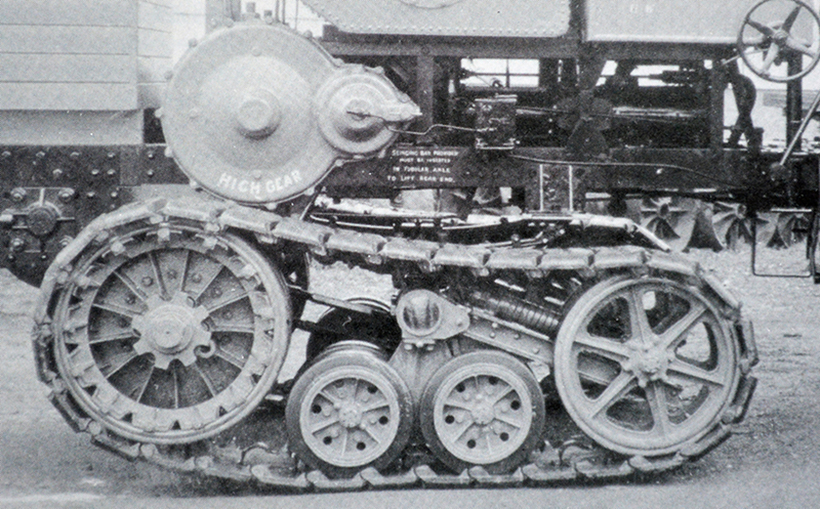 Anti-rocking lugs were also fitted on either side of the rolling paths. The track joints featured a hardened and ground special steel pin, working in a bush of the same hardened steel. Rubber tyres were fitted to the sprocket to cushion the engagement with the teeth and reduce noise. Track adjustment was straightforward, and the company maintained that: ‘When it does become necessary to change tracks, this can be carried out quite simply with basic tools, and is no more difficult than replacing an ordinary roller chain.’

In November, 1924, Commercial Motor reported on the testing of the tractor, commenting that: ‘The demonstration consisted of driving the machine without load through boggy ground, ponds two or three feet deep, and soft mud having to be traversed, in crossing hidden tree stumps and fallen timbers, in negotiating the sides of a trench about seven feet deep and climbing gradients of about 1 in 1 while, to show its capacity in haulage, a 31-ton tree log was easily pulled over rough ground. A drawbar test showed that the pull exerted was in the neighbourhood of six tons. A further test applied was the setting in motion of a number of derelicts, with a total load of 58 tons.’ 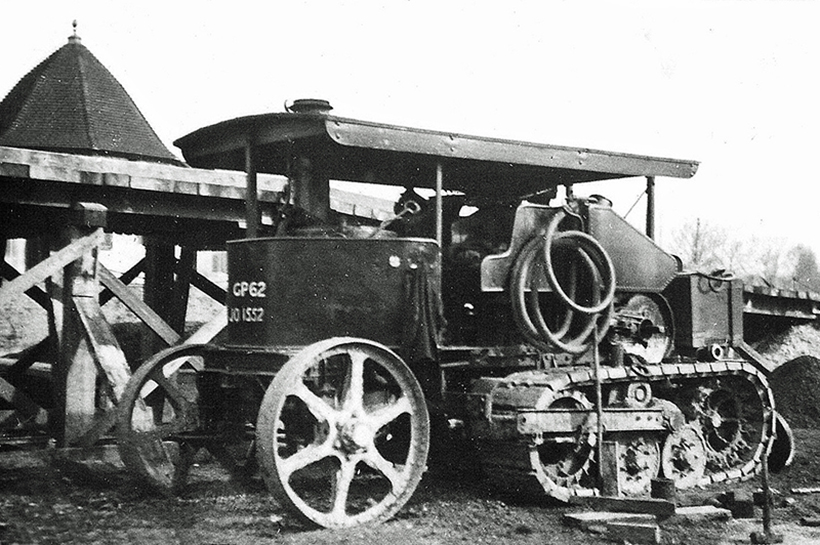 Rare and expensive
In commercial terms, very few of the Super Sentinel Roadless Tractors were produced. Although they were rated highly in terms of performance, they were, on the whole, quite expensive.

I’m indebted to Anthony Thomas for the details of the tractors which were produced, and which were mainly sold overseas. A total of 18 were built between October 1925 and September 1926, the first eight being built as single-speed machines, while the remaining 10 were two-speed machines. Of this total, only three were sold to customers in Great Britain, although it would appear that one of the engines concerned was No 6180; the first, two-speed machine to be built, which was originally sold to East African Estates in Kenya. 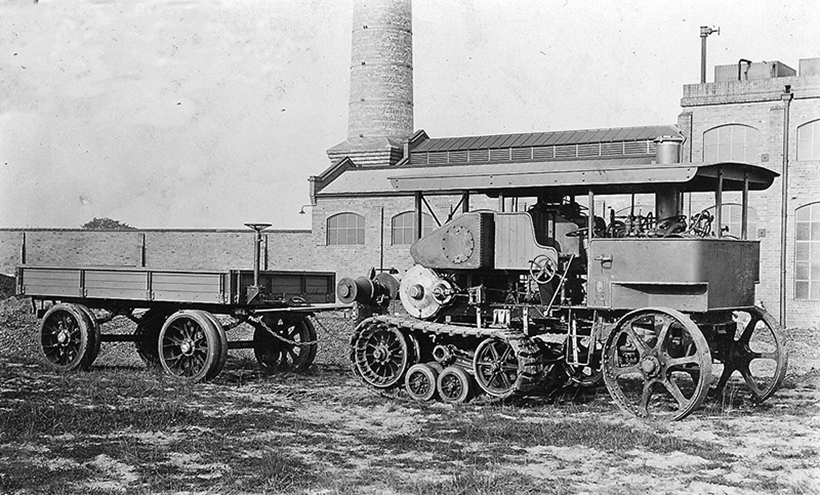 The last Sentinel Roadless Tractor to be built, No 6703. (Pic: Anthony Thomas Collection)

This tractor apparently came back to the UK and was sold to Sir Malcolm Campbell. Then it passed to John Allen & Sons of Oxford in January 1931, registered as JO 1552. Later, it was sold to Surrey County Council. There’s also some confusion stemming from earlier records which identified this engine as No 5794, the first Sentinel Roadless to be built. But this was a single-speed machine, and existing photographs show the differences. 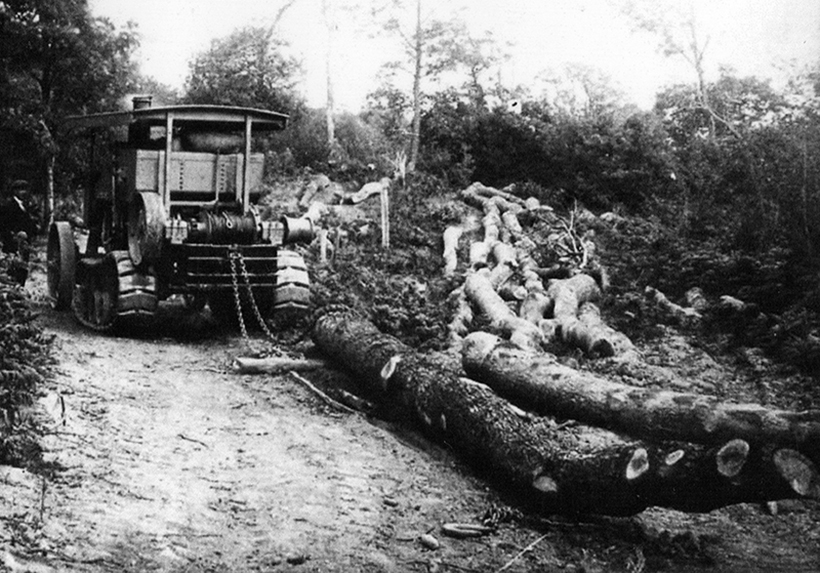 Probably No 6031, the first Sentinel Roadless Tractor to be bought by an English operator, in 1925. (Pic: Anthony Thomas Collection)

Five of the tractors were supplied to Sentinel Agents, Griffin Engineering in South Africa, and these included Works No 5794 which was exported in October 1925 after completing extensive trials. The Sentinel agent Jacks & Co, in Bombay, took four tractors, two single-speeds (Works Nos 6035 and 6142) which were later joined by the two-speed tractors Nos 6612 and 6613, in July 1926. A fifth machine also went to India, with No 6428 being acquired by the India Store Department, again in 1926.

South American finale
The last of the Sentinel Roadless tractors to be sold was No 6703, built in September 1926 and exported a little further afield, to Bolivia. This tractor was supplied with trailer No 6704, and delivered to Gillatt & Co, the Sentinel agents in South America. It’s sad to note that none of the machines have survived into preservation. 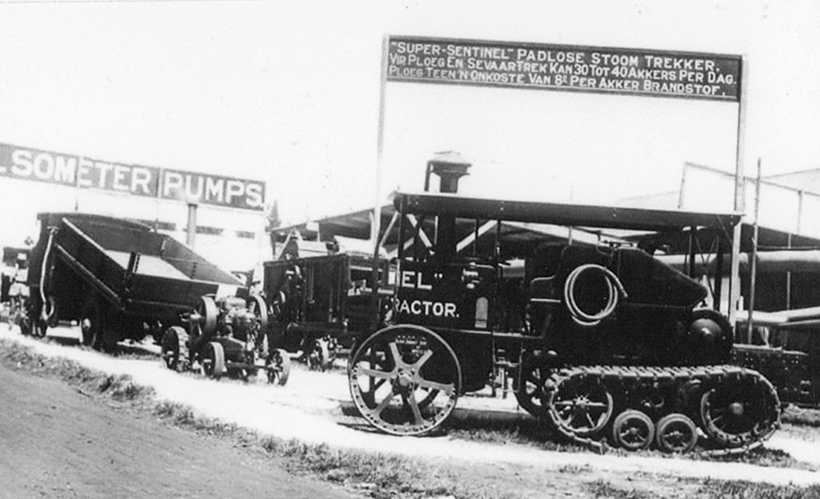 No 6540 on the Griffin Engineering Stand at the Rand Show in South Africa, June 1926. (Pic: Anthony Thomas Collection)

In its advertising material, Sentinel was keen to emphasise the versatility of the Roadless Tractor, especially as far as direct ploughing was concerned. It maintained that: ‘Owing to the very large area of the track, and the comparatively light weight of the tractor, the pressure on the ground works out at about 10lbs per square inch.

‘The Sentinel Roadless does not appreciably compress the soil. Moreover, one of the most valuable characteristics of the Roadless vehicle, with steerable tracks, is that instead of deforming and deteriorating the path over which it travels, the tendency is to steadily improve it. It can be taken safely over the lightest soil, drawing a 5- or 7-furrow plough without detrimental effect to the crop-bearing qualities of the soil in question.’

Extensive, direct-ploughing trials were held to prove the performance of the machine but, in reality, it would seem that, for most customers, it was the tractor’s haulage capabilities which were favoured, especially for timber work. Sentinel also commended the use of the tractor as being invaluable for mining work, excavation work on embankments, canals and railways, oil industry and construction work, but there seems to be very little evidence that any of the Roadless Sentinels were used for such work.

By way of summary, Sentinel declared that: ‘Enough has been said, however, to show that the combination of the finest steam tractor which has yet been produced, with the most modern and efficient tracks, results in a ubiquitous tractor equally applicable to a well-roaded country as to those places where roads, if they exist at all, can only be given the name out of courtesy.’ 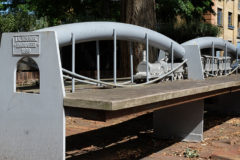 The brilliance of Brunel 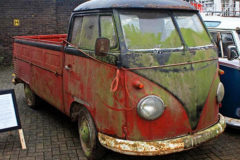