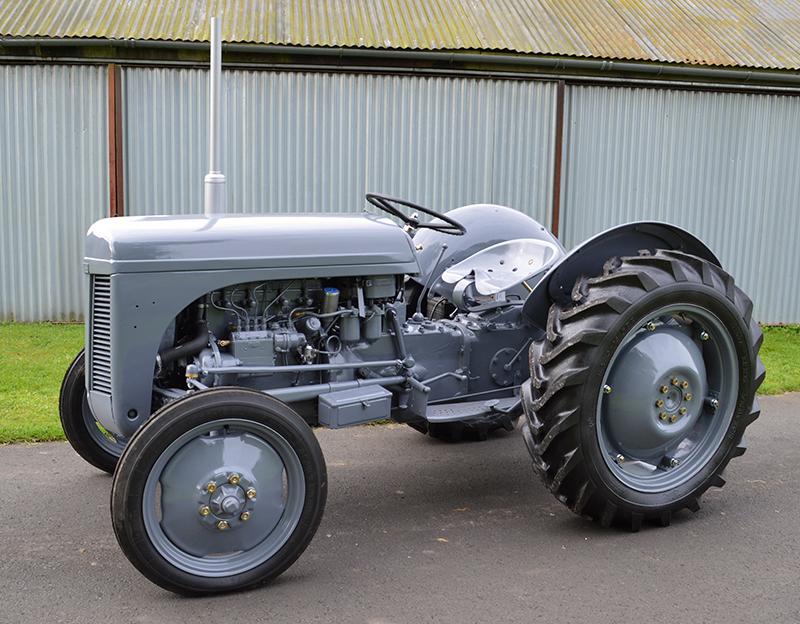 The TE-F was the diesel version; the Freeman Sanders-designed engine was a lovely-sounding machine

If you’re looking for a first tractor to buy, look no further than the Ferguson T-20. There’s an engine and enough style to suit most tractor lovers, as Ben Phillips explains

There’s no denying that the Ferguson T-20 has been a popular tractor since it was new, and most collectors will have had one at some point. My dad bought one in 1991, as a first tractor, and we spent the spring and summer of that year restoring it. 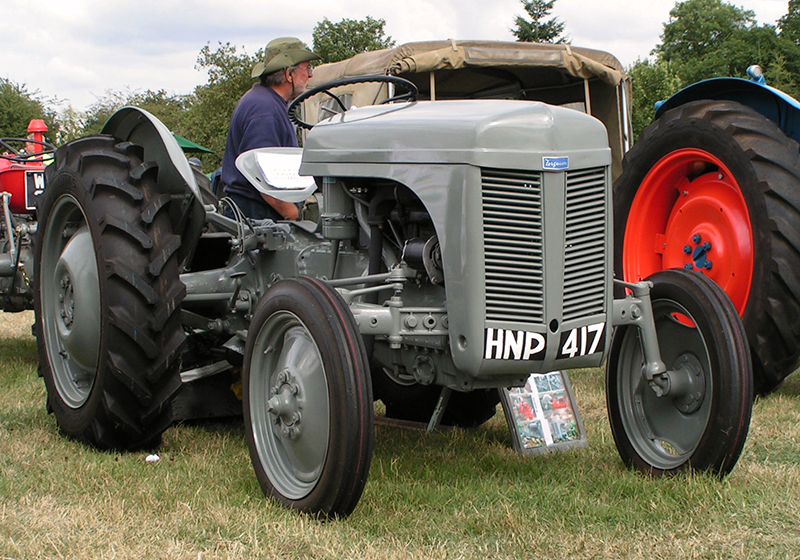 This TE-A20 was our first tractor, bought back in 1991, and is a straight petrol made by the Standard motor company

We had no mechanical knowledge in those days, but still managed to turn a rusty machine into something that looked good. Our Ferguson was a TE-A, which was fitted with the straight petrol engine made by the Standard Motor Company.

Even in the early 1990s, we still managed to find – one way or another – enough parts to complete the restoration. However, we were lucky that the tractor we got needed nothing major doing as, back then there wasn’t the extensive catalogue of parts available we all enjoy today.

Nowadays, the beauty of owning a Ferguson T-20 is that you can buy most parts to fix nearly everything that might go wrong. What’s more, owning a ‘straight petrol’ model means that you can simply go to your local filling station with a can, and fill up whenever you want to use the tractor.

Popular choice
The TE-A Standard Vanguard engine is by far the most popular straight petrol but, occasionally, you’ll find the American-built Continental engine fitted. These were used to bridge the gap until the Standard engines were up to full production. The Continental Fergusons are known simply as the TE-20 and, if you happen to buy one of these, you’ll probably find new parts for this engine more difficult to source. 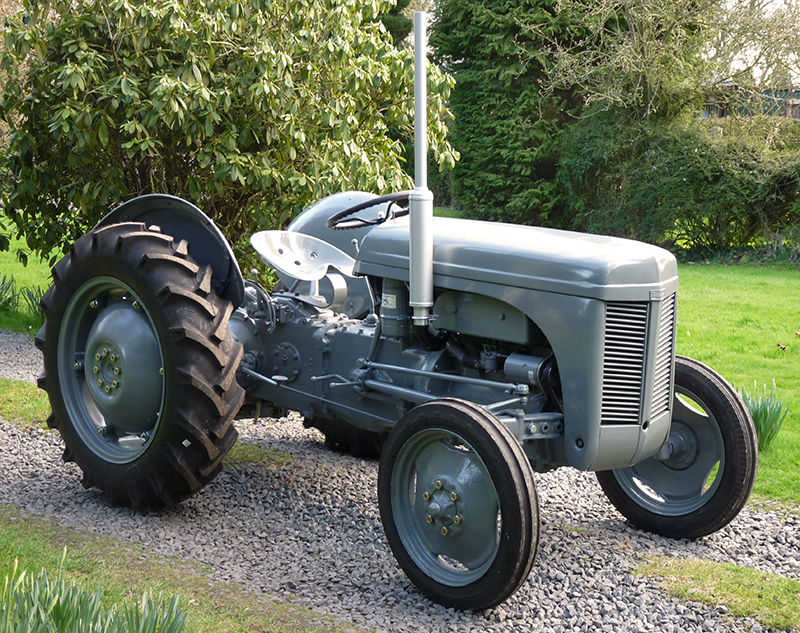 The TE-D was the petrol/paraffin version of the T-20 range, and is easily identifiable by the heat shield over the manifold

Of course, petrol isn’t cheap, so there are other fuel-saving options in the TE-20 range, such as the TE-D20. You’d be forgiven for thinking that because it has a ‘D’ in the title, that it’s a diesel. In fact, it’s the petrol/paraffin model, which is easily identifiable thanks to the heat shield fitted over the exhaust manifold.

Fuel facts
Lift the bonnet on a TE-D and you’ll find two filler caps on the fuel tank that sits on top of the engine. The smaller one at the back is for petrol while the larger one is for tractor vaporising oil (TVO). With this fuel type you’ll save money, so it makes sense if you’re planning give the machine plenty of use. On the flipside, though, you have the added bother of mixing the TVO.

To use TVO, the engine must be up to working temperature so, if you’re planning just to have a few quick run-outs every so often, then the TVO model wouldn’t be much of an advantage. It’s also worth noting that both petrol and TVO can deteriorate if kept over long periods, and neat petrol is easier to use up in different machines that you may own, such as a lawnmower.

My dad’s TE-A20 only gets used a couple of times a year in August so, after that, the petrol is drained out to use in our mower, and fresh fuel is poured in when the tractor next needs to run. Obviously, if it’s mixed with TVO, you can’t do this. 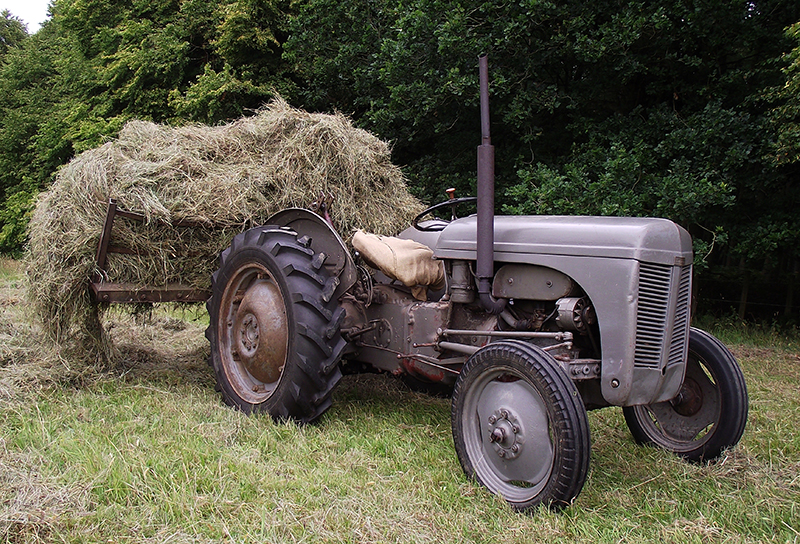 The Ferguson system will allow you to lift all manner of things, like a buck rake full of hay. The hydraulic lift is surprisingly strong for the size of the tractor

Diesel choices
If you don’t want the expense of petrol and the bother of mixing TVO, there are a couple of diesel engines available, one of which is known as the TE-F. To me, this four-cylinder engine must be one of the best-sounding diesels of all time. Designed by Freeman Sanders for the Standard Motor Company, the engine was known as the 20c. 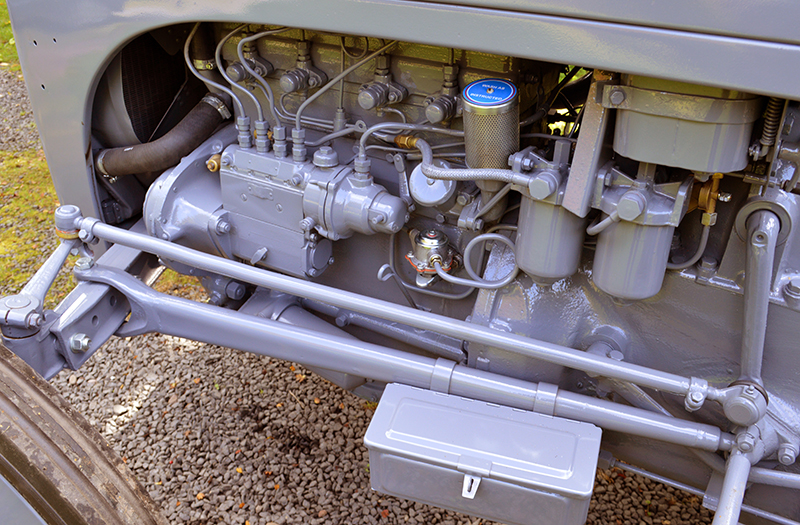 The diesel engine always looks quite cluttered; the injector pump is quite bulky and there’s a lot of pipes connecting it all up

While I find it delivers a great sound, the overall look of the engine is quite cluttered, with pipes and levers everywhere. The later ones were fitted with a fuel lift pump, which added even more pipes. I also find you need more than two hands when starting the TE-F, as there’s quite a procedure to go through.

First, you make sure the decompressor lever under the dash is facing straight down, then you unscrew and prime the Ki-gas pump. Next you pull and hold out the heater plug switch and, once you’ve counted about 15-20 seconds, you press a brass knob on the side of the gearbox with your knee, and shift the gear lever into the ‘S’ position.

Once the engine is turning over well, you move the decompressor lever to the right, and then hope that it starts! If it doesn’t, you have to start the whole process again. Luckily, the 20c engine wasn’t a bad starter, and often goes at the first attempt. One thing to note on the TE-F, is that the engine is more complicated to overhaul than its petrol and TVO relations. So, if you’re not mechanically-minded, make sure the engine is good. 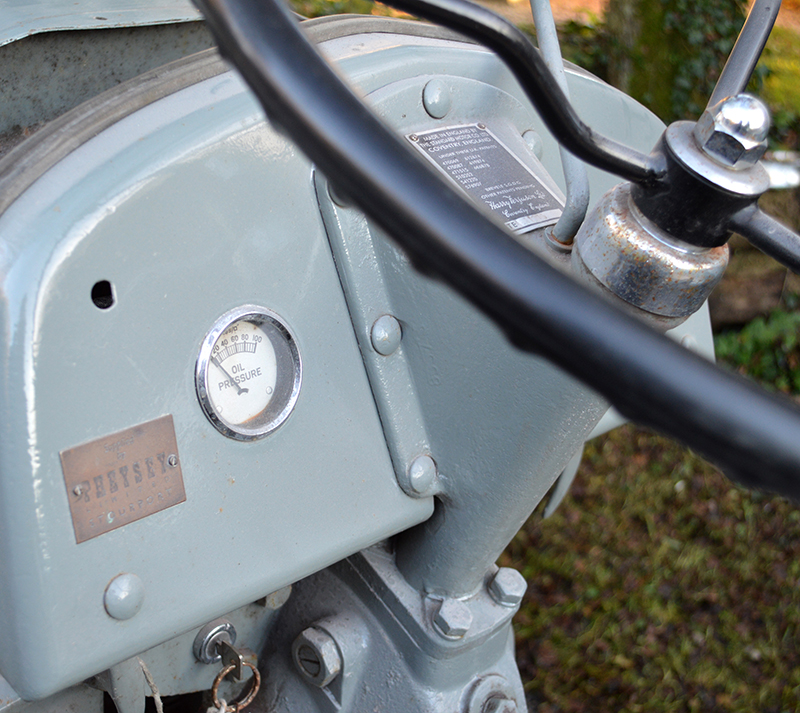 The dash on the TE-A is a simple affair; on this one, it has two gauges but sometimes it’s just one

The second diesel engine you could find in a T-20 is the Perkins P3. Perkins is a famous name in agricultural circles and its products enjoy a great reputation. The P3-engined Ferguson is easily identified as the bonnet is higher than the dash, but this wasn’t to everyone’s liking as it looked different to the standard-engined models.

Size does matter!
If size matters, you can find a Ferguson T-20 to suit your needs, as narrow versions were made, either by the factory or by a company called Reekie. The Reekie conversion was the narrowest, but the TE-L and TE-C weren’t much bigger. However, all the non-standard width tractors are harder to find and buy nowadays but, if you look carefully, they’re still around. 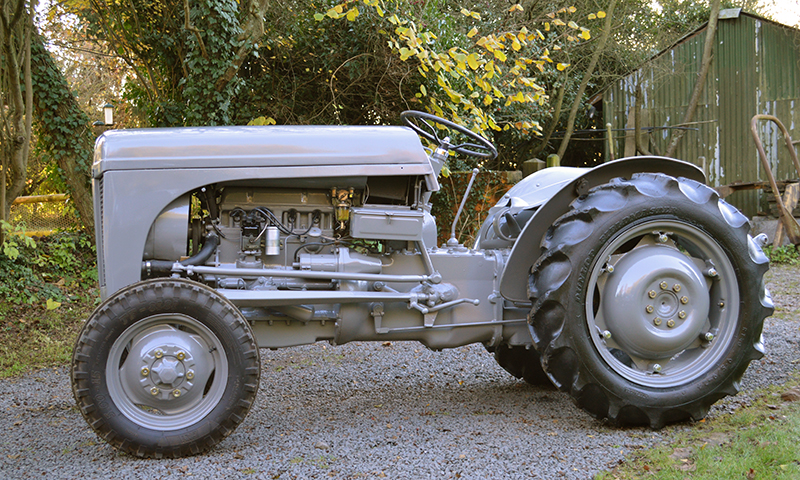 There were a few narrow versions of the T-20, this is the TE-L that has a few visual differences to the standard width models

The main differences with these smaller tractors concerns their axles, wheels, radius rods, wings and some of the hydraulic linkage items. Apart from these, though, the rest of the tractor is the same, so sourcing parts shouldn’t be a particular problem. 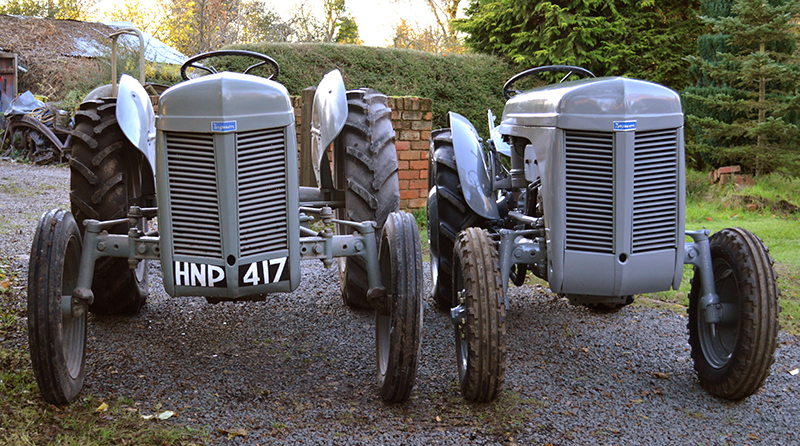 Comparing the TE-A to the TE-L you can clearly see the difference in widths of the standard version, compared to a narrow one

Having said that, if the parts that are bespoke to the narrow models are missing, you could be in for a struggle as far as finding replacements is concerned. So always make sure that any narrow T-20s are complete before you buy it. 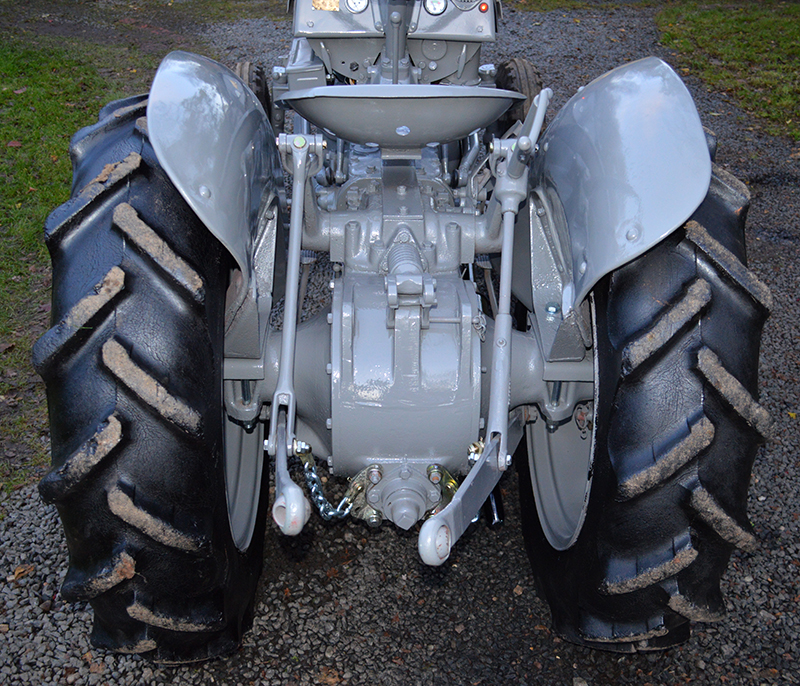 When looking at the rear of a narrow T-20, you can really appreciate just how narrow it is. Note the wings and various linkage parts are different from the standard model

On the spanners
Owning one of these machines is relatively straightforward, and any maintenance is easily done. But investing in an AF socket set and spanners containing 1/2, 9/16 and 11/16 is a good idea. These three sizes will fit most nuts and bolts on a T-20. It’s also worth getting a long breaker bar with a 1-1/16th socket, as this is the size that fits the wheel nuts. It’s a smart move to check these often if you own and use a tractor regularly. 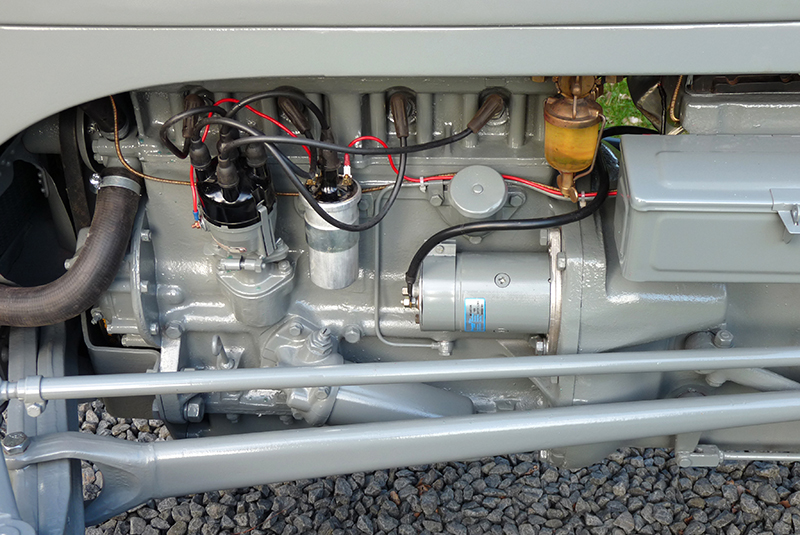 Changing oil and filters on both engines is a job that isn’t hard to learn, however, major engine overhauls will require some mechanical knowledge. There are workshop manuals available to buy and, when we did ours in 1991, the manual was an invaluable source of information.

However, these days thanks to the internet, finding out how to do something is a doddle using various forums and videos. Tractor clubs are also great at interacting with like-minded enthusiasts, most of which boast knowledgeable and experienced members who will be happy to provide help and advice. It’s not hard to find the two main Ferguson clubs, which are both very popular.

So, which T-20 should you choose? Well, depending on how often you want to drive it and, assuming you don’t mind the petrol costs, the TE-A would be my choice as a great first-time tractor. Petrol is easy to obtain and use up, and the T-EA is relatively easy to work on and, assuming that the fundamentals are right, should prove to be a reliable performer.

Storage and transport
Whichever T-20 model takes your fancy, though, you’ll find it’s small enough to store in most places; the average driveway or garage should provide enough space to keep a grey Ferguson. If you’re restricted on the height, you can even find a T-20 which has a downswept exhaust, so it’s only the height of the tractor to house. Not only is a T-20 small, but it’s reasonably light to tow about, thus eliminating the need for a massive trailer and towing vehicle. A pick-up is ideal, but a good-sized estate car should suffice. If in doubt, always check the towing capacities on your vehicle. 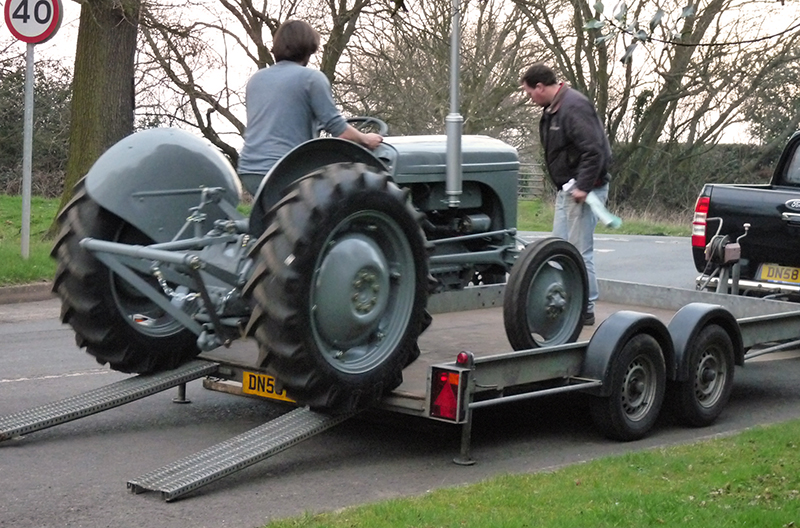 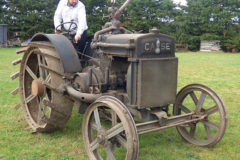 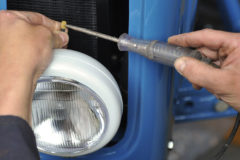