The MF 65 is one of Ben Phillips’ favourite machines, and he has been lucky enough to restore a few over the years. Here he shows you what to look out for when looking over the tractor. 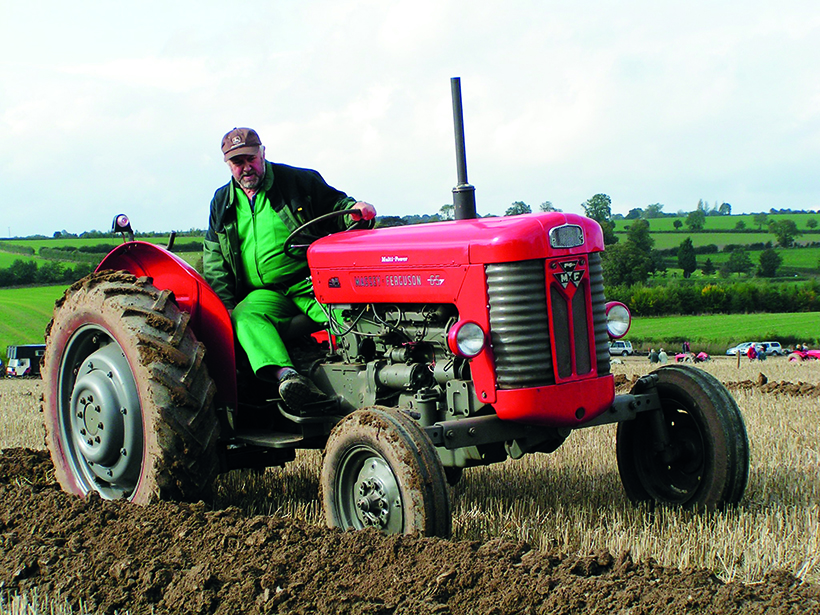 Alan Braithwaite from the Worcestershire/Shropshire border loves his Massey Ferguson 65, which he uses for competition ploughing.

If you fancy the 35s big brother, let’s have a look at this model in more detail and see if it’s right for you. Launched in 1958, the Massey Ferguson 65 rather fell into the background as the 35 gained popularity when it had the Perkins engine fitted. The 65 also was fitted with a Perkins engine, the first one being the A4-192, followed by the A4-203 in the 65 MK2. It’s hard to say which was the better engine as I’ve heard good and bad reports on both. Having had experiences of both, I think they are generally good engines. I would say parts for the A4-203 are more commonly available than the A4-192, but for both, you won’t be short on what’s needed to maintain these engines.

Engine longevity
Our neighbour, the late Ken Briggs, had a Massey Ferguson 65 MK1 and used it for most of his farming life. He had bought it when it was nearly new and told me it had done well over 20,000 hours with no engine overhauls. The tractor had obviously seen a lot of work in its life as, along with his 35x, it was the main tractor on the farm. It had done many jobs from haymaking to loader work. The secret to the engine’s longevity was regular oil changes and being just generally looked after.

Unfortunately, not all MF 65s have been so well looked after, so if you’re looking to buy one, pull the dipstick out and look at the oil. The chances are it will be black as it doesn’t take long for it turn that colour, but if it’s thick and gloopy it means oil changes have been few and far between. 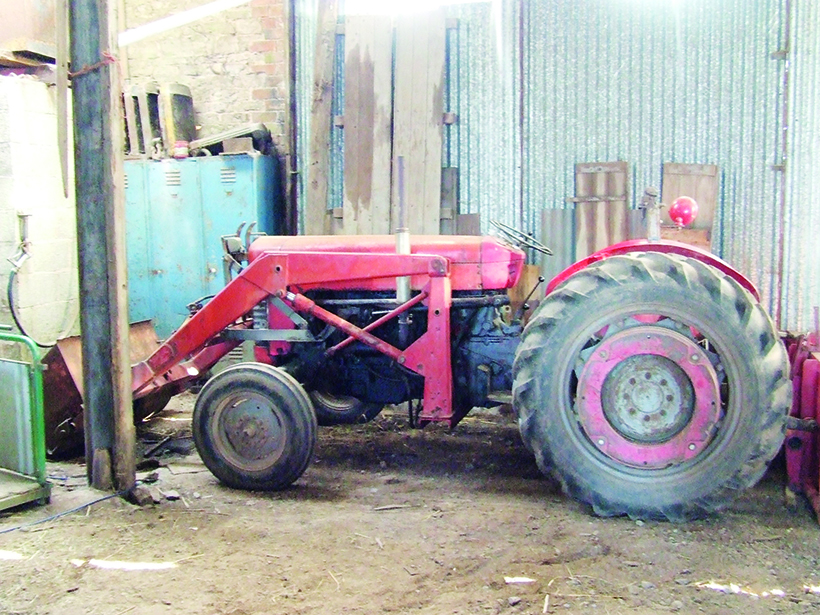 The first Massey Ferguson 65 available was the MK1 fitted with the Perkins A4-192. I spent many happy, hot, summer days on this actual tractor.

For a few years on hot summer days, I used Ken’s MK1 65 for loading hay bales with a Browns flat 8 grab. This was easy work for the 65 and could be used with very little power. It was also easy for me, as this had a genuine MF power steering unit fitted. The power steering was a godsend when you’ve got the weight of eight small bales along with the grab and loader turning the steering without would be hard. I loved doing this job looking down the 65s long bonnet and listening to the beautiful sound coming from the Perkins A4-192.

Braking
My only complaint was the brakes. MF 65 brakes consist of four discs, two on each side sandwiched with an actuator that pushes them outwards. When they are new and set up correctly, they work well but if they get old and have got hot at some point, they are not so good. Another reason for the brakes on these not working is the oil seals failing; two seals hold oil away from the brakes, one from the back end and the other from the reduction hubs. 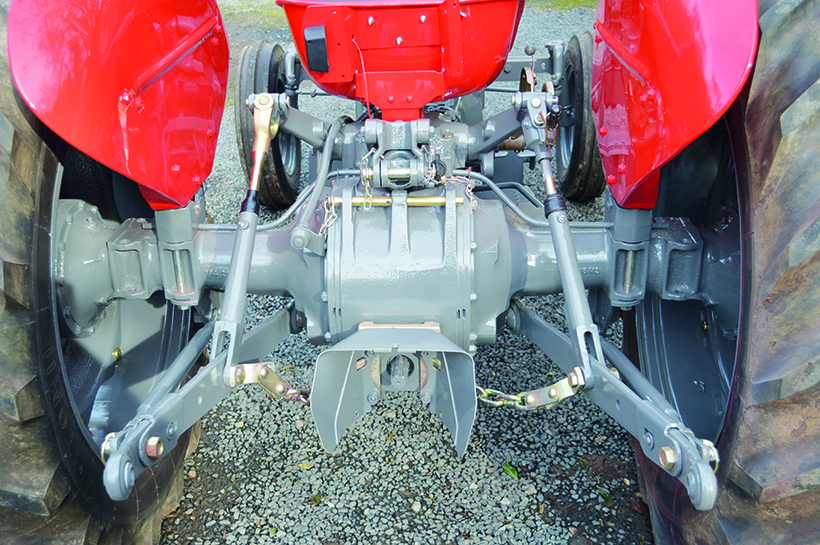 The hydraulic lift arms featured detachable ends so both Cat1 and Cat2 could be fitted. These weren’t overly successful as they wore out quicker than the solid type.

If you’re buying a 65, I would advise you to test the brakes thoroughly. Also, I would get underneath and poke a small screwdriver into the channel that’s designed to drain any oil that’s leaking. You need a screwdriver as the channel is prone to blocking up with a mixture of oil and brake dust. Keep in mind that if the brakes need doing, you’ll need a good hydraulic crane as the whole axle needs removing and while you are doing the brakes you might as well do the oil seals, so the whole axle needs stripping, which isn’t a five-minute job.

Plenty of parts
I’ve been fortunate to restore a few Massey Ferguson 65s, these being the MK2 fitted with the A4-203. While doing these, I found you can buy nearly every part to rebuild these engines. Multiple sellers can supply pistons, liners, rings, many bearing sizes, oil pumps and even cylinder heads complete with valves. When buying an MF 65, checking the breather pipe that runs down the front by the fan could save you an expensive engine rebuild. 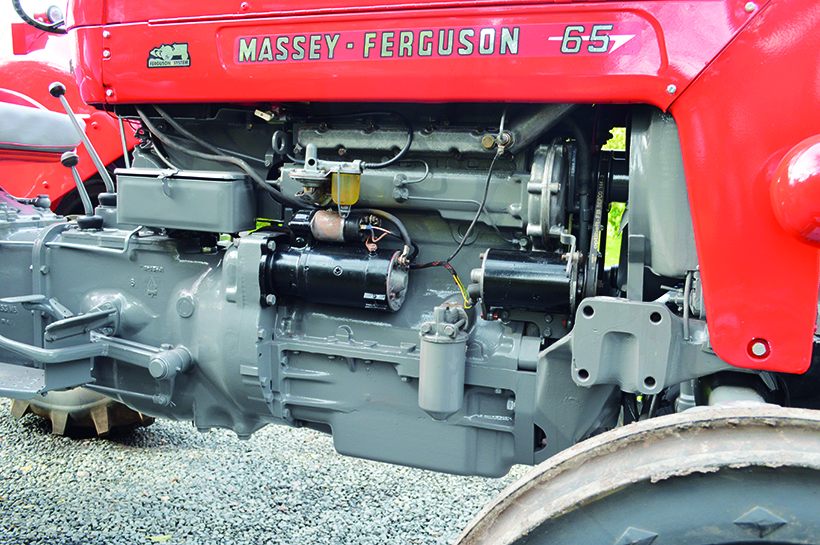 The Perkins A4-203 was, in my experience, a nice engine to work on. I’ve heard mixed reviews on the engine in general but mostly good ones.

If there’s smoke coming from the bottom of the metal tube, the engine will need attention, also check the tube or the rubber elbow connecting it to the rocker cover. A clever bodge is to drill a hole so the radiator fan can disperse the smoke before it gets to the end of the tube. Recently I had a 65 with an A4-203 engine that was smoking more from the breather pipe than the exhaust. When I stripped it down, the engine was worn out. A comprehensive rebuild followed; the block was stripped, and a new engine kit was fitted. To do a rebuild on these Perkins engines you’ll need a good self-standing workshop press to install the liners; these are extremely thin and have to go into the block very tightly. If you haven’t got such equipment, getting an engine specialist to fit them is your only realistic option. 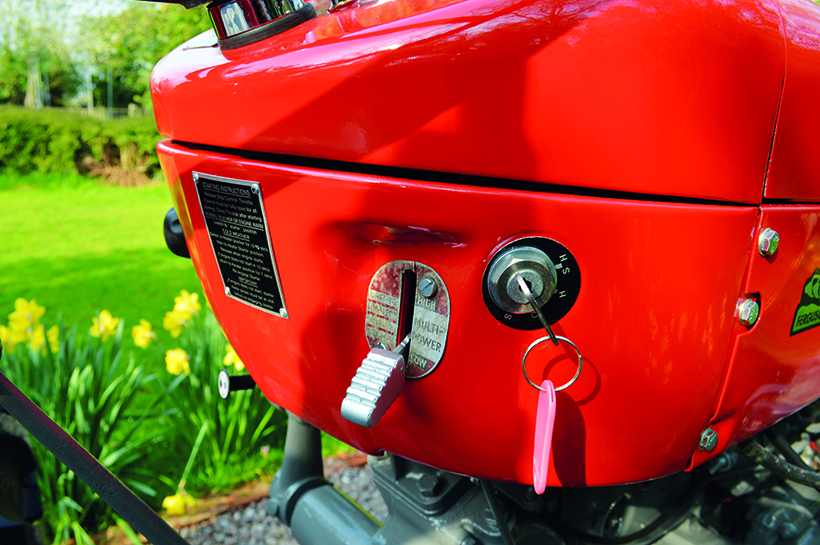 Under the top dash, the lower section is found, which contains the light switch and Multi-Power lever if these are fitted.

Tinwork
The tinwork on the 65 had been seen before, but not on this side of the Atlantic. The Ferguson 40, which was built in Detroit and came on the market two years before the 65, had near-identical bonnet and wings, and being a US tractor, it was fitted with a four-cylinder Continental gasoline engine. This styling was very different from the 35; the shell type fenders were the same as on the TE-20 and 35 tractors, but the rest of the 65’s design was a pleasant change. 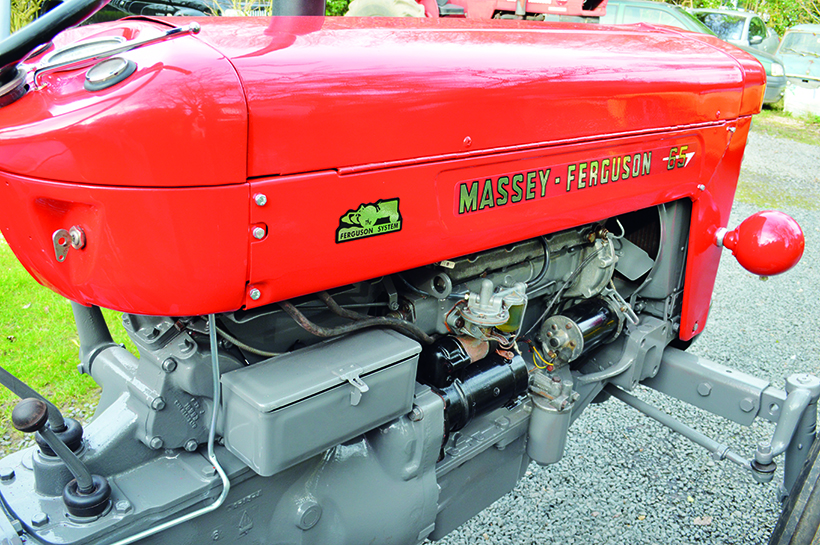 The bonnet on the 65 was long and hinged over to the one side. As the hinge is long and carried the full weight, it is prone to wearing out.

There are 11 sections to the bonnet, eight of which make up the front cowl. The long bonnet on top has a hinge on the right-hand side. If this hinge wears out or breaks, a piano hinge can be used as a replacement. The bonnet lifts over to the one side and reveals the fuel tank, the size of the fuel tank differs between the MK1 and MK2 the latter being noticeably bigger. The cowl comprised two side sections, two grilles, and one centre grille lower and upper sections. 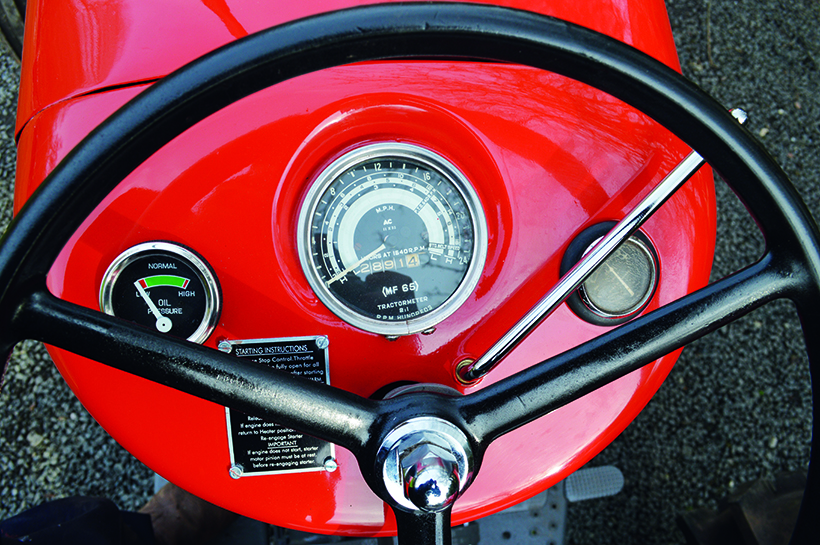 The dash will be familiar if you’ve ever owned a 35; oil pressure, ammeter, and a tractor meter with a chrome throttle lever on the right.

Air cleaner
Inside the upper section, there’s a further plate that holds the air cleaner in place as this is situated just in front of the radiator. The black rectangular mesh with a chrome surround above the grilles feeds the air into the oil bath cleaner. In my experience, the front end on tractors will end up with the most damage. Luckily, you can buy complete cowl assemblies or individual sections so if you find a Massey Ferguson 65 with tinwork bent or rusting away, don’t be deterred. In fact, every bit of tinwork except for the dash is available for the MF 65, and you’ll rarely find one needing a dash. 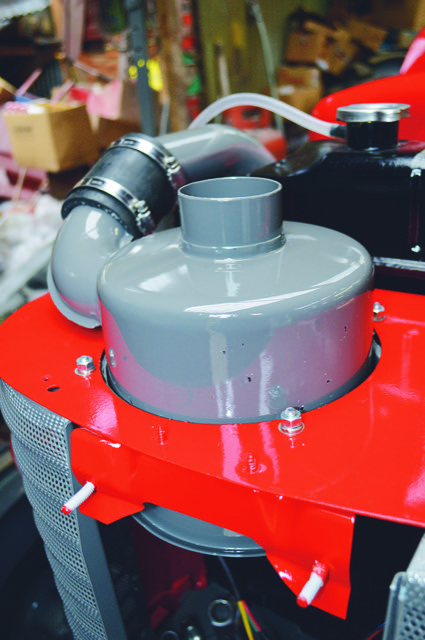 Behind the grille and upper part of the cowl, the air cleaner is hidden away, bolted to a flat plate in front of the radiator.

The gauges found are largely the same as on the 35, the tractor meter is in the centre with oil pressure to the left and an ammeter to the right. Under the top dash is the lower part, which is a separate section where the key ignition and light switches are and – if fitted – the Multi-Power lever.

Wheels
With the wheels on the 65, the standard size you’ll find the most of is 6.00/16 for the fronts and 12.4-32 for the rears. The front rims are common on most tractors of this size and age, including the 35, but the rears are more bespoke to this model. Made up of a centre dish bolted to an outer dish, there are quite a few configurations. These can be moved to alter the tractor’s width. 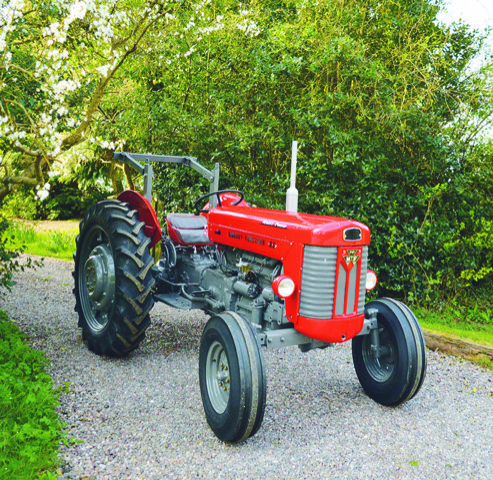 This MK2 MF 65 has bigger wheels fitted, which raises the height of the tractor compared to the standard version. 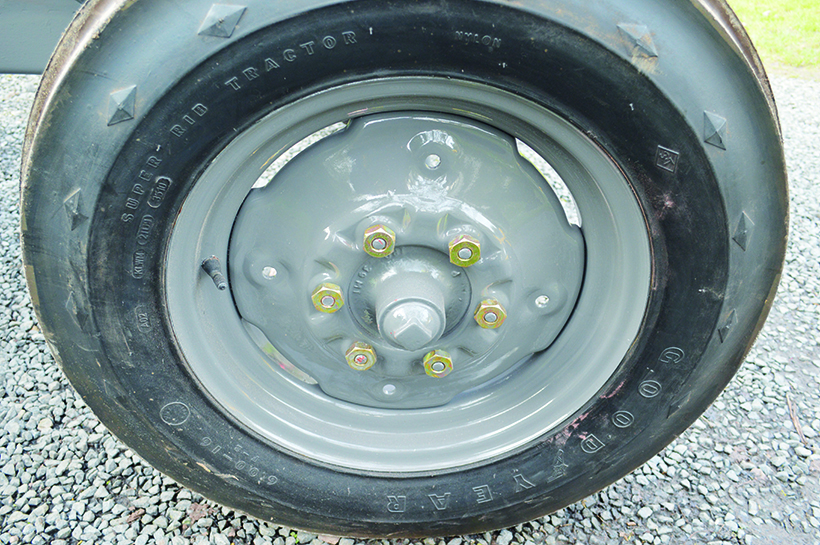 The standard front wheels are 6.00/16, these rims are available from a variety of retailers, as are the tyres.

On my neighbour’s tractor, because it had a loader fitted, three wheel weights were found around the outer dish. These were genuine Massey Ferguson ones. While this was a neat solution, it made the tractor wider. The most recent 65 I had in to restore had the bigger wheels and tyres fitted. On the front I put 7.50/16 tyres on a 16in rim; this matched the rear 12.4-36 and made the whole tractor sit much higher. The fronts probably should have been 6.00/19 but 19in rims to suit an MF 65 aren’t readily available. 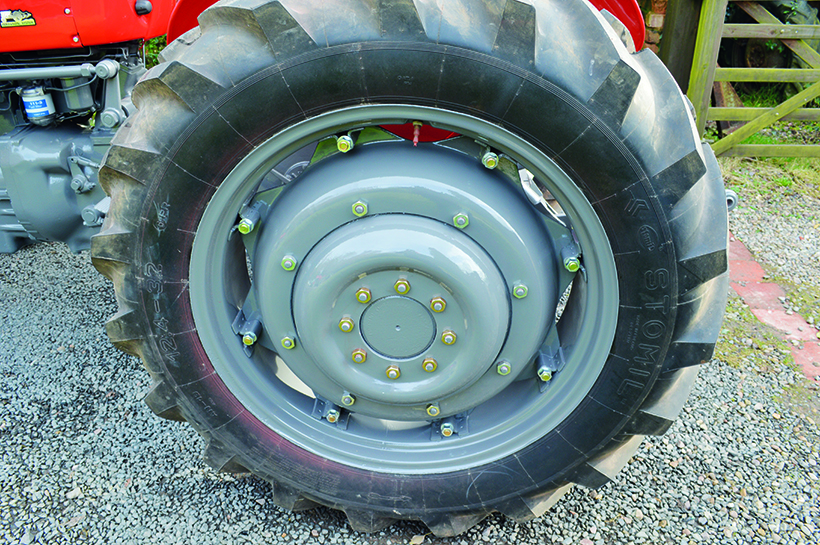 Lift arms
On most tractors, the hydraulic lift arms are often worn out and in extreme cases, the balls drop out. The MF 65 had bigger and stronger lift arms than some tractors and featured detachable ends. While it was good that just the end section could be removed, it didn’t eliminate wear on the actual arm itself. If you’re looking at a 65 that you’re interested in, have a good pull and move the very end of the lift arms, chances are there will be free play where it hooks onto the arm. 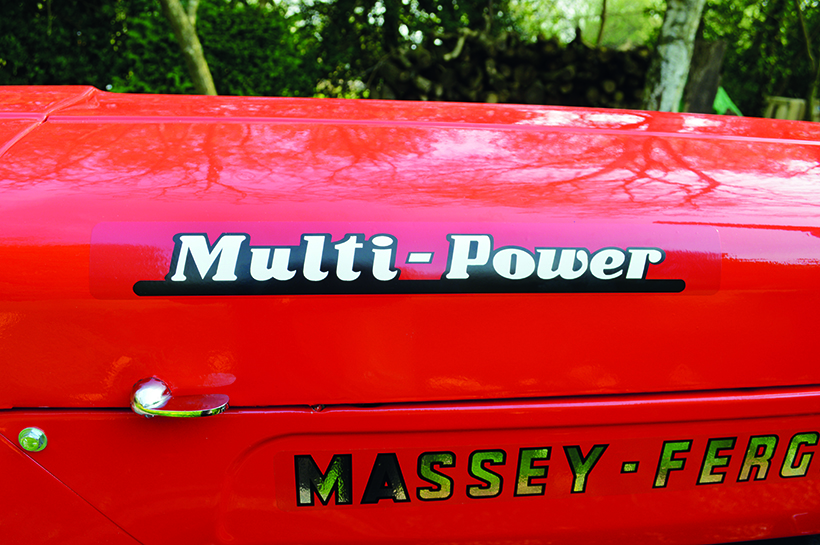 Some MF 65s have Multi-Power fitted, which appeals to some collectors. Knowing how to use this feature is important.

This area should also have a spring-loaded clip in a groove to release the ends, which on many tractors will be missing, I’ve seen all manner of things stuffed in this slotted groove as the spring has sprung out at some point. If this is the case, don’t be deterred as complete arms with release springs and ends are available; both Cat1 and 2 ends can be bought, which is useful if you want to use both sizes.

Colours
Regarding correct colours, the first Massey Ferguson 65 rolled off the production line in red and grey, but the grey wasn’t the darker Stoneleigh instead it was flint grey which was more of a silver shade. This was an in-between colour as later the more familiar Stoneleigh grey was adopted and became Massey Ferguson’s colour scheme for years to come. 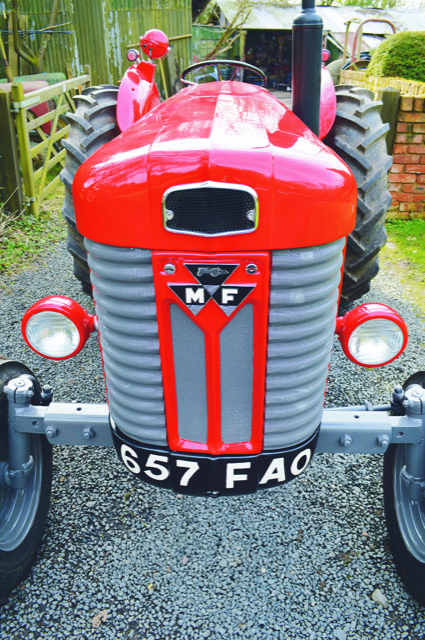 The front cowl featured a lot of sections and was near identical to the Ferguson 40, which was made and sold in America. The black grille with chrome surround supplies air to the oil bath cleaner. 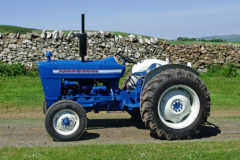 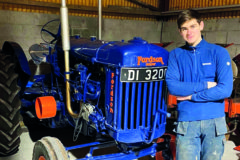