Bob Moorman was lucky enough to see 1873 Fowler 12hp single-cylinder (No. 1908) ploughing engine back in steam after 90 years! 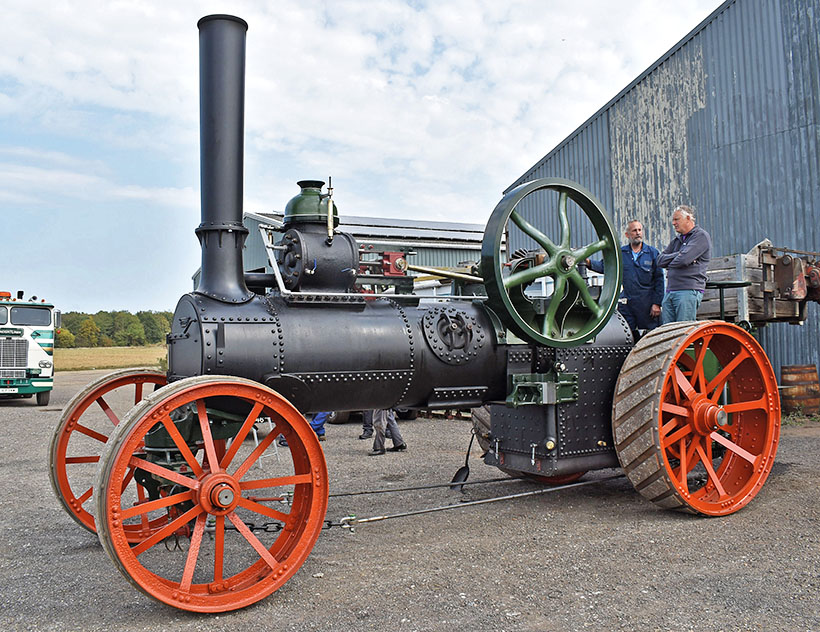 This magnificent engine, an 1873 Fowler 12hp single-cylinder (No. 1908) ploughing engine, was new to Harman Visger of Chiseldon, Wiltshire, and left the works on February 12th. It was delivered via the Midland Railway – together with a plough, cultivator and anchor – to be used in a single-engine system for ploughing. But, after a while, it was decided to purchase a second engine and adopt the two-engine system, which required the clip drum to be replaced by a standard drum.

The second engine bought was Fowler No. 2299, and the pair worked together until being laid up sometime in the 1930s. Then, in about 1944, they were sold to Watson & Haig of Andover, and No. 1908 was stripped of its major components by fitter, Nobby Hardiman. It was then sold to a nursery on the Isle of Wight, for soil-sterilising duties. 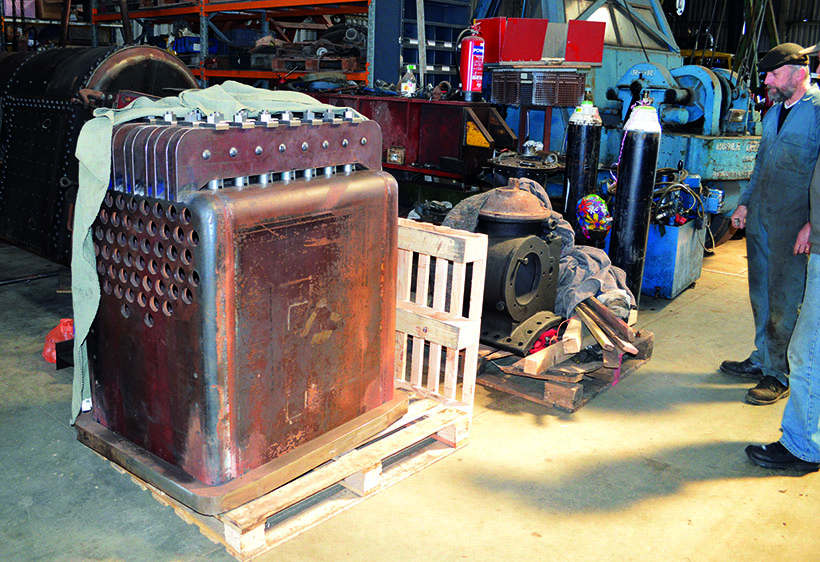 The new firebox complete with crown stays, in April 2014, ready to fit into the boiler (behind) and the cylinder block to the right. (Pic: Bob Moorman)

After many years of service, the boiler became redundant and, eventually, was sold at auction in 1970s. The purchaser who bought the lot only wanted the Tasker wheels which had been fitted to make the lot mobile. Alwyn Rogers then stepped in and bought the remains, which consisted of the boiler, cylinder block, front axle, perch bracket and steam turret, which acts as a steam manifold on top of the boiler. The boiler was sent to a boiler maker for assessment, only to be condemned and regrettably scrapped.

Alwyn concentrated on researching the engine’s history, seeking a few replacement parts and raising money for the restoration. Eventually, in 2005, the parts were advertised for sale via Preston Steam Services near Wingham, in Kent. Looking for a challenge, self-employed precision engineer Paul Ransley, who has a base at Goblands Farm, Hadlow, stepped forward, bought the parts and begun the Herculean task of rebuilding the engine as close to the original specification as possible. 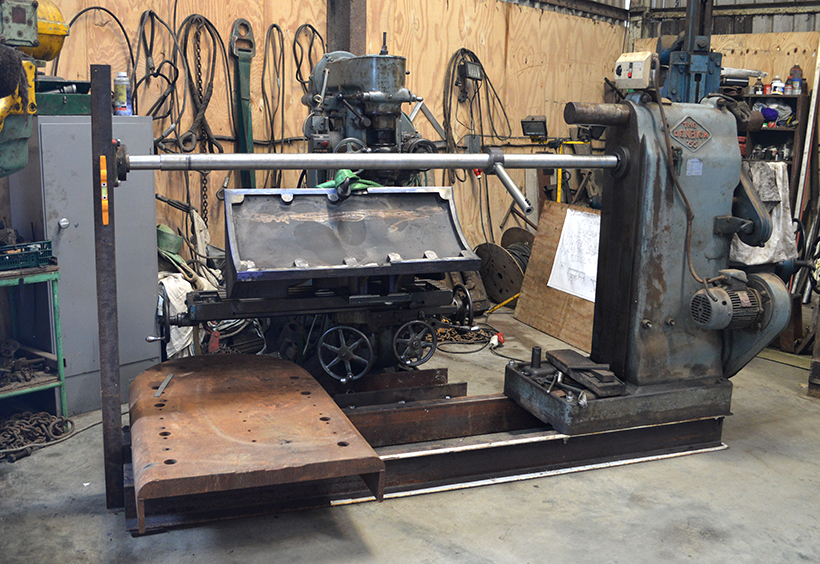 The imaginative way Paul machined the large crankshaft brackets to fit on the radius of the boiler, using two milling machines in October 2013. (Pic: Bob Moorman)

He used as many original, Fowler parts as could be found from all over the world, and was helped by fellow members of the Steam Plough Club and others. One front wheel was found being used as the anchor for a gate post, which only came to light when someone hit the post which, in turn, lifted the wheel out of the ground!

The ‘coffee pot’ safety valve cover had been used as a flower pot for many years, while a pair of road gears were found in Australia, following a chance conversation with the owner at the September 2016 World Ploughing Championships held at Crockey Hill, York, where the engine was on show. A crankshaft, bevel gears, steering gear and winding drum came from various people, and were probably among the parts sold at the mid-1980s Beeby sale. 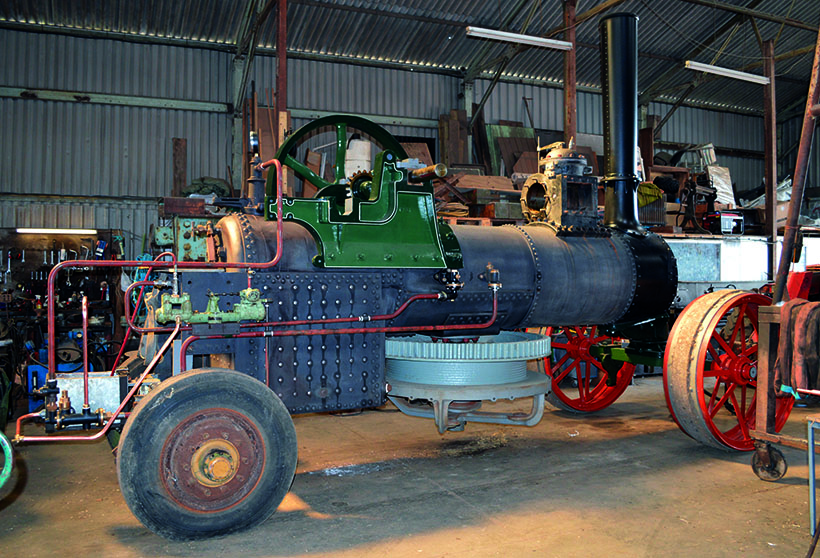 The boiler under hydraulic test in April 2017, with some temporary wheels and plumbing. (Pic: Bob Moorman)

The engine was originally built with friction drive on the rear wheels; a common practice at the time. The wheels are driven via friction bands acting on drums on the rear axle, and the tension was adjustable via a large nut. The idea was that it would act as a differential, allowing one wheel to slip when cornering. In practice, though, it proved unreliable, especially when going downhill – leading to several runaways. This resulted in most engines being modified to a positive-drive system, by pinning the drums.

Most early, single-cylinder Fowler ploughing engines were modified during their working lives by the Oxford Steam Plough Works, which re-boilered them with increased pressure, and also fitted new cast iron chimneys, longer smokeboxes and altered various other parts. But, in most cases the tender steering was retained. In this modified form, they were renowned for being very strong engines, remaining in service for many years. 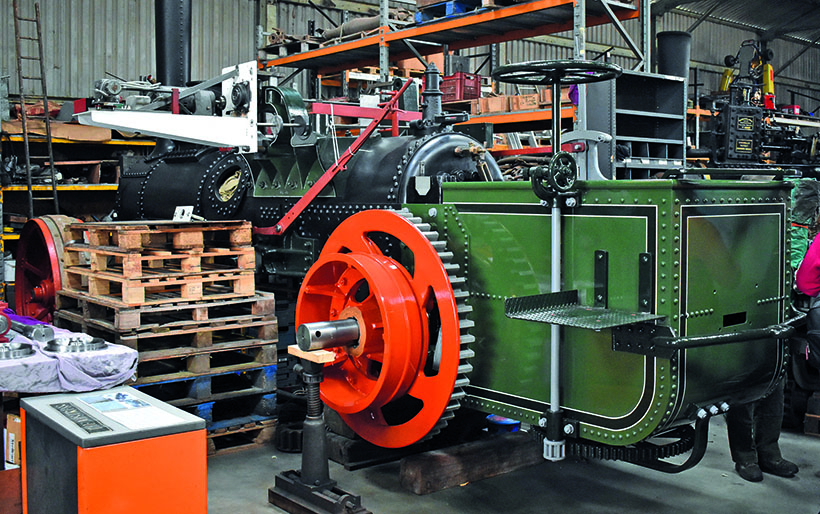 The tender, showing the steering plus one of the drive drums on the rear axle, in November 2019. Also, the crankshaft bearings are being lined-bored. (Pic: Bob Moorman)

In preservation, surviving examples of this type of early, single-cylinder engine, have been converted in one form or another, with the exception of one – No. 1862 of 1872 – which is in a museum in Denmark. Paul has visited the Frilandmuseet, Maribo and studied the engine at length; one discovery was the original colour scheme of two shades of green, with orange wheels.

Paul started the rebuild by designing and building a new boiler; a process not helped by an electrical storm which ‘fried’ his computer causing him to lose all his design work. Undeterred, he built the boiler at Goblands Farm, with help from the resident steam crew, culminating this year in a fully-approved, CE-marked boiler – a great achievement, in itself.

Another major task was the construction of the two drive wheels and one front wheel. These were built the same way as Fowlers did them originally. The outer rims were constructed, then riveted together, complete with strakes. The spokes were loosely bolted into position and cast into the hubs. Final riveting of the spokes and machining of the hubs, completed the wheels. The casting work was done at MJ Allen’s foundry in Ashford, and the finished result was excellent. 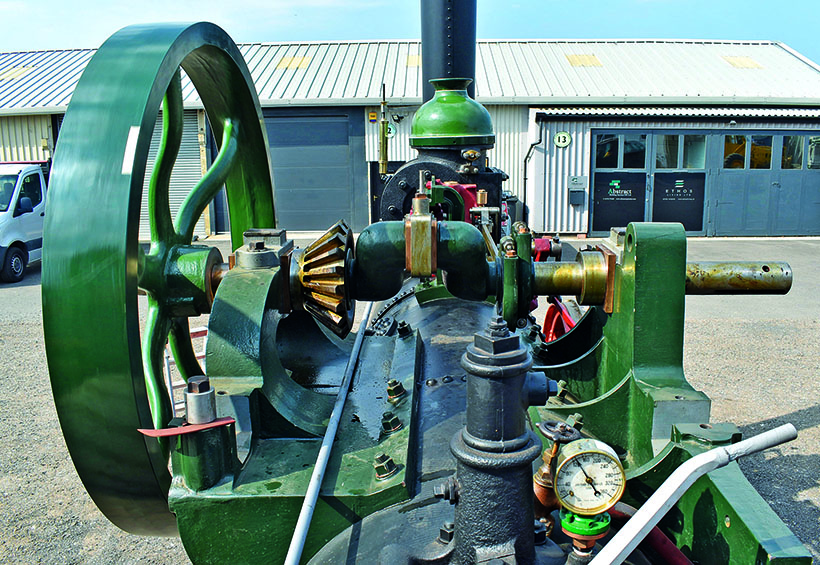 A driver’s eye view of the crankshaft and motion on the day of steering.

The early engines didn’t use horn plates to carry the crankshaft like the later ones. Instead, they utilised large, cast brackets that were bolted on to the top of the boiler. The patterns for these – and many other parts – where made by Roger Luck’s father, Peter, who was a very talented craftsman.

The rebuild reached a very important stage last September, when it was steamed for the first time, passed its boiler test and ran for the first time in approximately 90 years. While the motion work is complete, no gears, drum or drive have been fitted yet. Paul is hoping to be able to drive the engine next year and, perhaps, take it to Denmark to photograph it beside the engine in the museum that was such an inspiration to him.

The quality of the work carried out on this engine is excellent, and is a credit to Paul’s skill. The sight and sound of it pulling is something that many will be looking forward to. In the meantime, Paul would like to thank all those who have helped him over the years, especially the Pierce family on whose farm the engine is based. 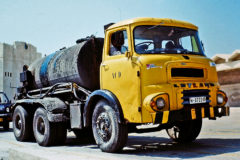 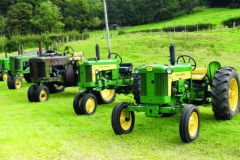