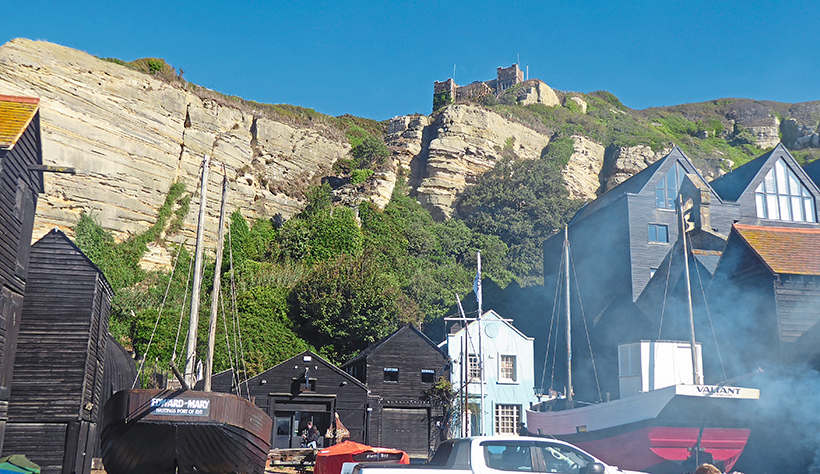 In the boom years of British seaside holidays, no self-respecting coastal resort was without some sort of miniaturised transport, often in the form of a miniature railway. On the south coast, Brighton had the wonderful Johnson’s miniature coaches, Eastbourne had its own, equally wonderful, 2ft gauge tramway which is at Seaton in Devon these days, and Hastings had not one but two miniature railways. Over the years, many of these attractions have become eclipsed by more modern novelties and, sadly, a lot of miniature railways have been subject to mindless and costly attacks of vandalism, forcing many owners to call it a day.

Fortunately, several of the older miniature railways have managed to stay the course, and still continue to attract enough interest from the visiting public to remain viable operations. 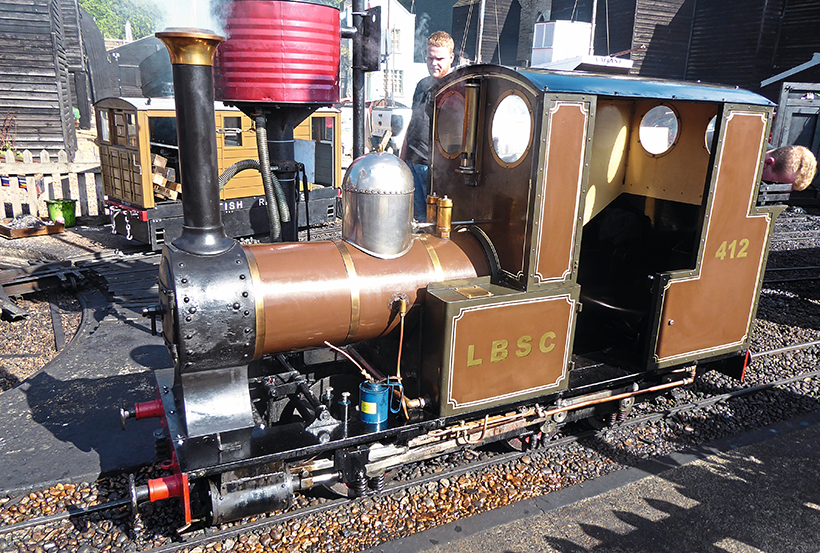 Pilgrim an 0-4-2 side tank loco’ visiting the HMR is seen raising steam at Rock-a-Nore on Sunday 25 September. (Pic: David Vaughan)

A good example is the Hastings Miniature Railway (HMR), which is situated on the seafront and runs between the amusement park and boating lake and the famous old net shops that form an integral part of the fishing beach; the last of its kind along the south coast to feature shore-launched fishing boats.

The line is to 10¼in (260mm) gauge and has quite a history, being originally opened in 1948. It owes its inception to the railway entrepreneur Captain JEP Howey, the builder and owner of the Romney, Hythe & Dymchurch Railway. He also owned a 10¼in gauge 0-6-0 tender locomotive Firefly, painted in Stroudley ‘Improved Engine Green’ (actually a golden-yellow ochre) and a Bassett-Lowke scale model of 4-6-0 Royal Scot. These locomotives ran for a short time alongside the RH&DR at Dymchurch just after WW2, but were relocated to St Leonards-on-Sea where they operated for about a year before the good burghers of the town complained about the line. It was then moved to Hastings and sold to Ian Allen and Jim Hughes. This was the beginning of the line as it is today. 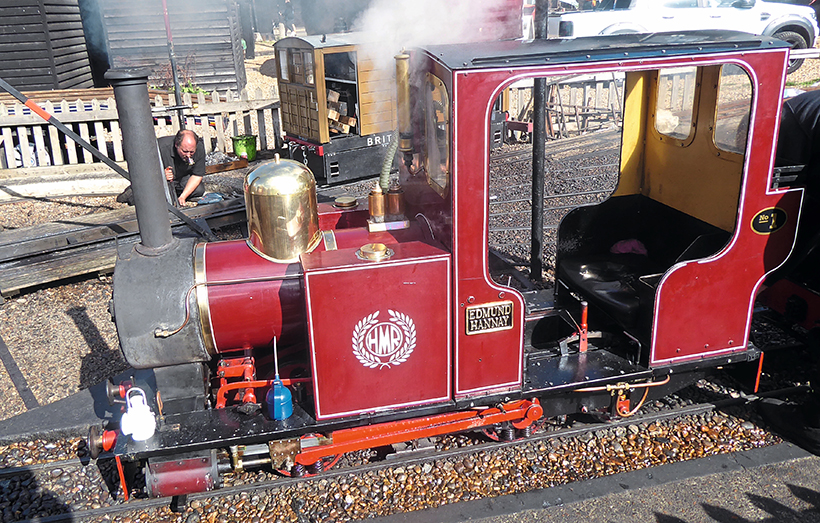 Edmund Hannay is a resident locomotive at the Hastings Miniature Railway and used to run on the Wells Harbour Railway. (Pic: David Vaughan)

In 1948, the railway’s headquarters were situated at Rock-a-Nore, an area of old Hastings near the fishing beach, known as The Stade. For a time Johnson’s miniature coaches also ran alongside this station that was named East Beach. In 1959 the line was extended to a new terminus at Marine Parade, taking the full extent of the line to just over 600 yards. The station at Rock-a-Nore had facilities for locomotives and rolling stock as well as a water tower, a double-road engine shed and a three-road carriage shed. The main line ran through this shed, which was also used as overnight storage for rolling stock and served as a tunnel during the day. A turntable was also added in 1960 and there was also a GWR King class locomotive with its four cylinders there at that time.

During the 1980s there was a decline in the railway’s fortunes; the line became somewhat run down and sidings at Rock-a-Nore were lifted or became overgrown. 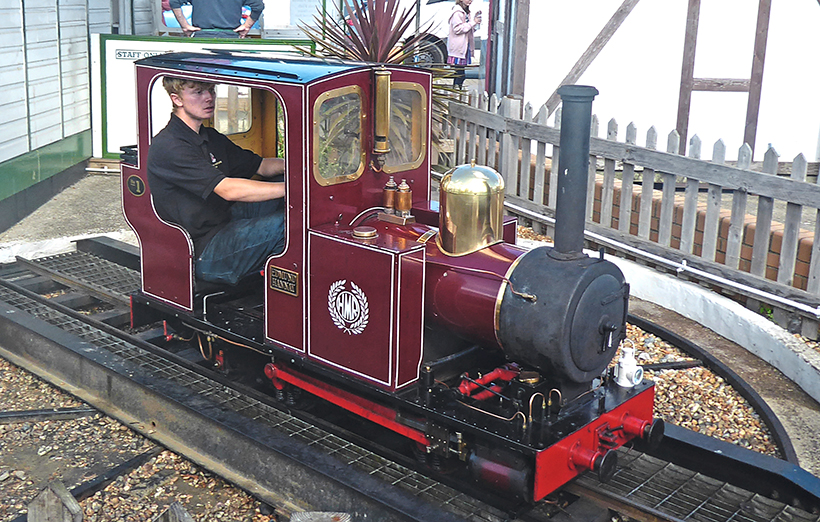 In 1984 the railway changed ownership. The passing loop at East Beach station was removed and most of the remaining locomotives were sold, to be replaced by a steam outline diesel loco named Sweet Pea, purchased from Allan Keef.

In January 2010, the railway once again changed ownership and a new lease was granted on condition that a substantial investment was made. The railway reopened to the public in August 2010 after extensive rebuilding and restoration work had been carried out. Since then, new locomotives have been added to the fleet and the passing loop has been reinstated, meaning that, after a period of 20 years, two-train running could be reintroduced. In early 2011, extensive work was carried out at Rock-a-Nore station, with much of the historical track layout restored. There is now a turntable at both ends of the line. 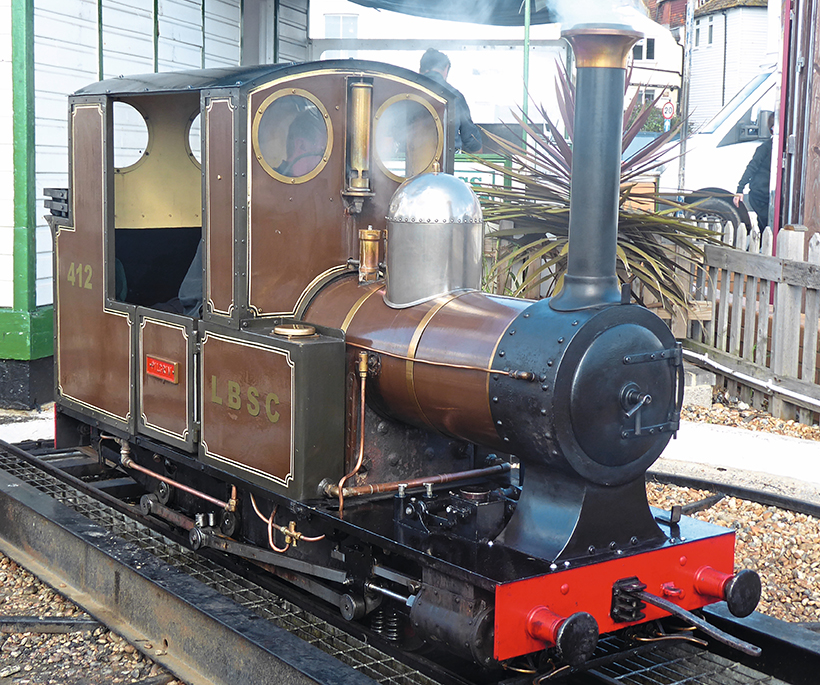 Pilgrim is also seen here on the Marine Parade turntable, and is about to double-head a train to Rock-a-Nore with Edmund Hannay. (Pic: David Vaughan)

My visit to the railway last September coincided with a weekend Gala event, for which occasion a number of visiting locomotives were operating on the little line. I arrived before the line opened to the public and there was a hive of activity preparing locomotives and rolling stock in the yard at Rock-a-Nore

The first locomotive that I saw was a visitor to the line, a 2-4-2 tank engine Pendragon in an eye-catching Greyfriars grey and black livery lined out in black and white. The engine was built in 1994 as a 12¼in gauge model by the Exmoor Steam Railway, and originally named Ashorne when it worked on the Ashorne Hall Railway. Since that railway closed down following the death of the owner, it’s worked at several locations including the Rudyard Lake Railway where it was stripped down for boiler work and a new firebox. Afterwards, Pendragon was taken back to the builders and was re-gauged to 10¼in. Pendragon has got to be one of the most travelled 10¼in locomotives in the country, having visited no less than seven different railways, but it’s now with the Astbury Light Railway in Suffolk. 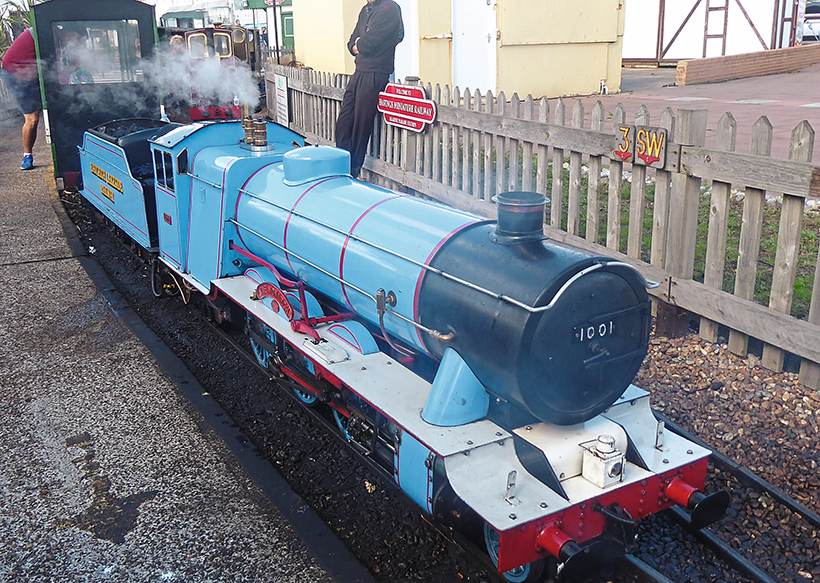 Monarch was the oldest loco running at the gala, a visitor from the Eastleigh Lake Railway with an interesting WW2 history. (Pic: David Vaughan)

The oldest loco in steam was a 4-6-0 tender engine named Monarch. It was a visitor from the Eastleigh Lakeside Railway in Hampshire. It was built in 1932 by H Bullock and is celebrating its 90th birthday. She is the sister locomotive to the line’s original 0-6-0 Firefly which ran at Hastings from 1948 to 1982. During WW2 its owner, a high-ranking officer in the army, lent it to the MoD who used it as a training aid for commandos, in order to show them the parts of a steam engine that were most vulnerable to sabotage. The engine carries a plaque to celebrate this war service. The driver told me that it was the most powerful engine on its home line, and is capable of pulling 12-coach trains. The ex-Hastings 0-6-0 Firefly, now painted blue and based in Scotland, has visited the line in relatively recent times, but its own home has since been been closed – where’s the engine now?

A powerful-looking American-style diesel locomotive called Patricia was another visitor, this time from the Ropley Miniature Railway. It is believed to have been built as part of a batch of six by Roger Hunt in the 1950s, and is based loosely on a General Motors EMD F7 class. It’s powered by a two-cylinder Lister diesel coupled to a generator powering the traction motor to the rear bogie. 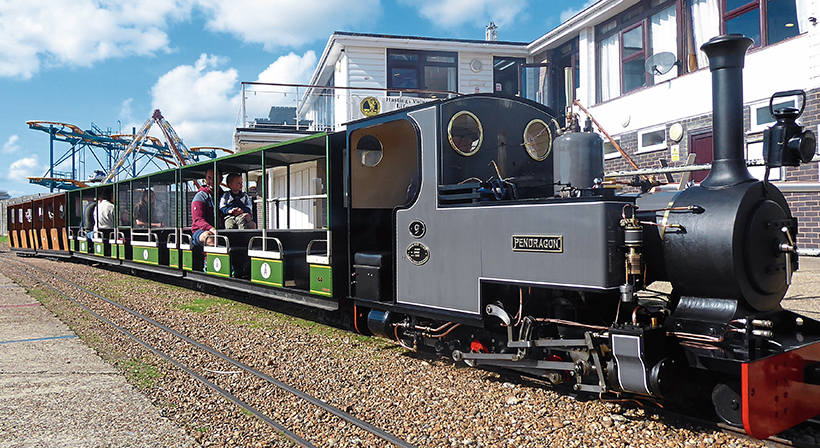 Pendragon – a smartly turned out 2-4-2 originally built for the Exmoor Railway in 1994 – is seen here with a train of happy passengers on the reinstated passing loop at the midway point of the line. (Pic: David Vaughan)

The last of the engines visiting for the gala is based on an LNER J70 steam tram. It is one of three diesel hydraulic locomotives built in the late 1980s by Ray Prime for the Buxton Miniature Railway, where the loco was rebuilt as a Wisbech & Upwell Tramway locomotive similar to Toby, featured in the Rev Awdrey’s famous books.

A locomotive resident at the line is Edmund Hannay. David King built this 0-4-2 side tank dating from 1972 for the Wells Harbour Railway in Norfolk, and it later ran at Knebworth House. In 2014 the engine was loaned to the HMR on a permanent basis, and received a redesign and a thorough overhaul. 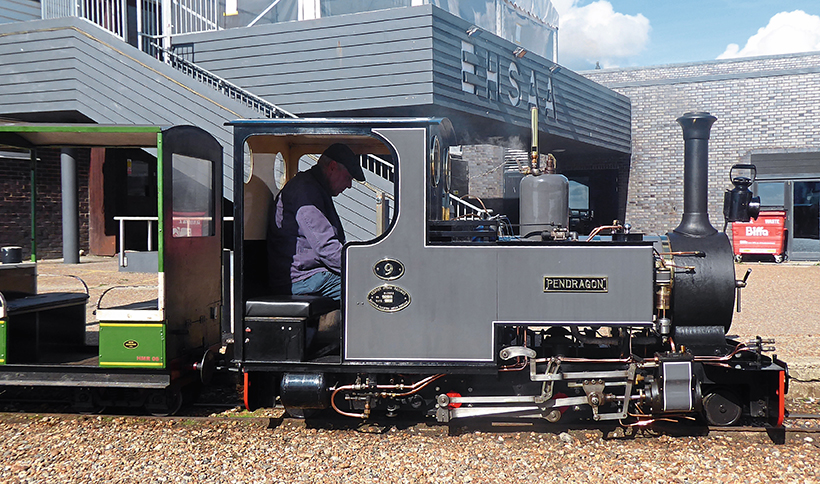 Pendragon has undergone a number of livery changes, including maroon and bright green, during its life but I particularly liked this smart Greyfriars grey and black livery. It was obviously a well-engineered locomotive and is fully equipped for air braking. (Pic: David Vaughan)

Pilgrim is another David King loco built in 1981 for the Wells & Walsingham Railway. After that railway’s Garret locomotives arrived, Pilgrim was sold on and was a regular visitor to the Great Dorset Steam Fair. After further service at Knebworth House and Watford, the loco is now on permanent loan to the HMR. 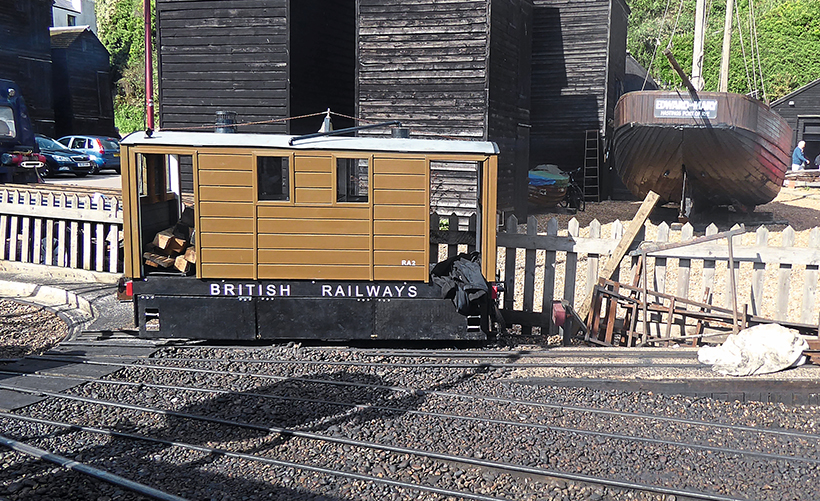 This locomotive is based on the tram style engines that used to run on the Wisbech & Upwell Tramway. (Pic: David Vaughan)

Firefly is named after the line’s original engine and was built in 1985 by Jack Brown of Heanor as one of a pair of Sweet Pea class engines. It was purchased by the HMR in 2021 and, after suitable modification, hauled its first train later that year.

I purchased an all-day rover ticket for only £6, which was excellent value and enabled me to travel behind all of the locomotives in service for a very enjoyable few hours reliving my younger days when, on rare visits to Hastings with my parents, I had the choice of a trip on the miniature railway or a boat ride on the boating lake. 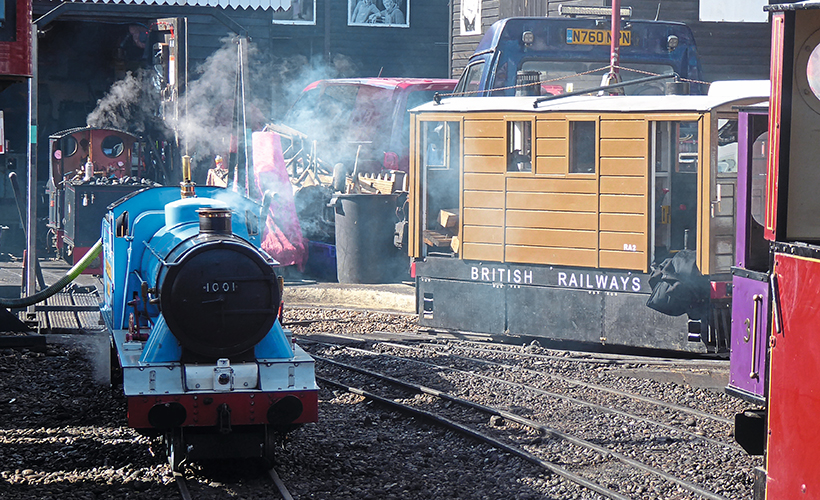 A hive of activity at the Rock-a-Nore sheds as Monarch prepares for the days work and the Wisbech-style tram engine sits waiting its turn on the line. (Pic: David Vaughan)

There were several other locomotives stabled in the sheds or preparing for the afternoon session, and others clearly out of service and stored in the tunnel. Indeed the whole area around the Rock-a-Nor station was buzzing with activity and all looked after by a dedicated band of friendly volunteers. There was a regular service of trains with a 15-minute headway, and several of the trains were double-headed.

For enthusiasts of funicular railways, Hastings boasts two of these in the West and East Cliff lifts, taking visitors up the steep cliff faces behind the seafront. The noises from the pleasure beach with its fairground rides, together with the smell of freshly-caught fish at the other end of the line, made for a typical seaside day out, complete with a late lunch of fish and chips! 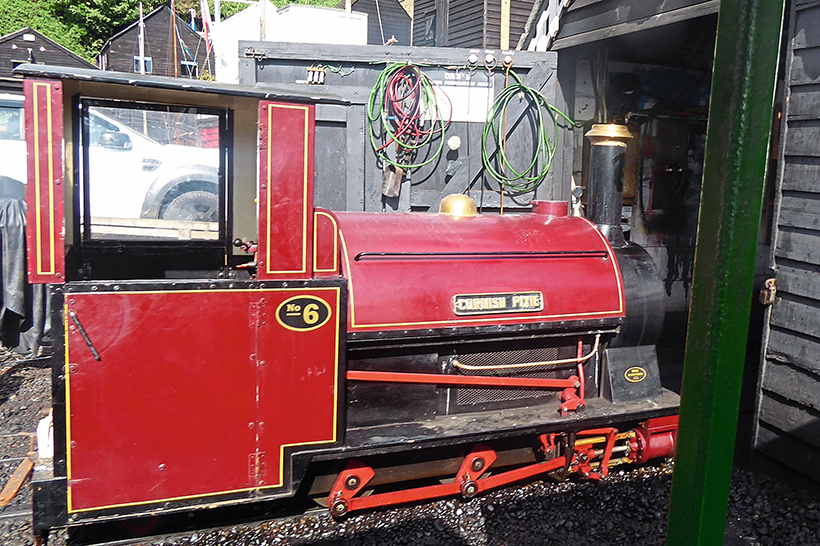 Cornish Pixie is a steam outline diesel locomotive owned by the HMR. It is based on a quarry Hunslet saddle tank. (Pic: David Vaughan)

Grateful thanks must go to Dan Radcliffe for details of the locomotives. 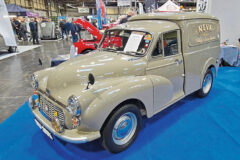 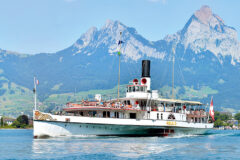