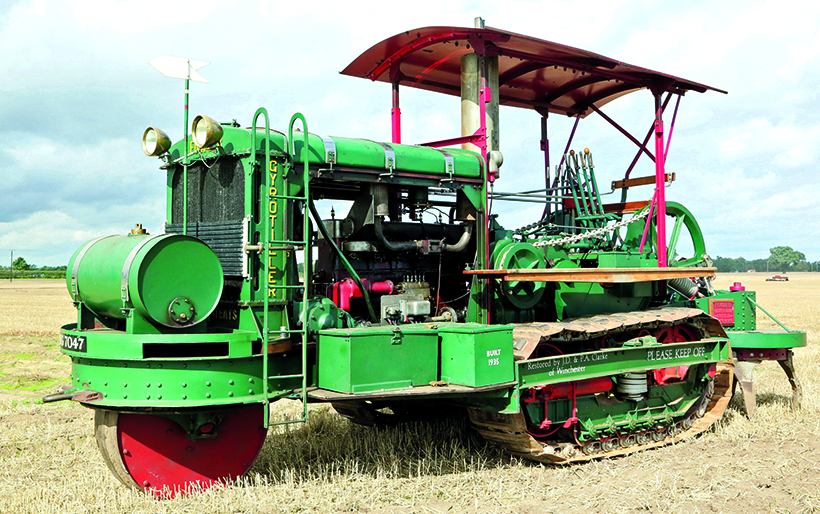 AJ Ward & Co made its name in the contracting business until the 1950s, operating a large fleet of steam rollers, seven of which are in preservation today. In hindsight, this may well have resulted from the company’s reputation for hanging on to all its used tackle. Whatever the reason, the preservation movement has much to thank Wards for.

Agricultural contractor
The company, which had a strong affiliation with Wallis & Steevens (based not far away in Basingstoke, Hampshire), was also a very large agricultural contractor in the area. This side of the business operated several sets of steam ploughing engines, plus various steam traction engines for threshing. Then, as times changed, tractors and combines took their places. 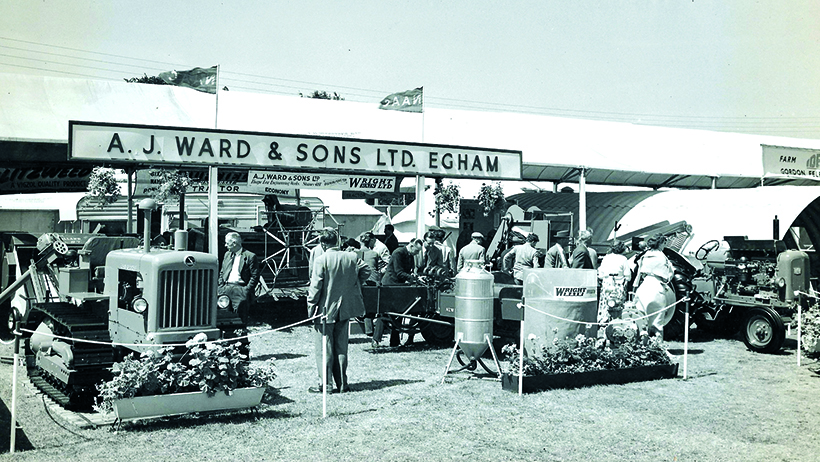 It was certainly a busy time for Wards at the Guildford Show, in June 1956.

Among the machinery coming into the company’s ownership were two of the mighty, 170hp Gyrotillers, manufactured by Fowler of Leeds. Of these, No. 20681 was the only one to make it into preservation. This machine arrived at Wards on April 6th, 1935, and has since been painstakingly restored by engineer John Clarke and his son, Paul, who live near Winchester.

The pair actually worked for Wards from 1946 to ‘49, and their duties also included working and driving the Gyrotillers, and the preserved example is reported to have been working as late as 1963. 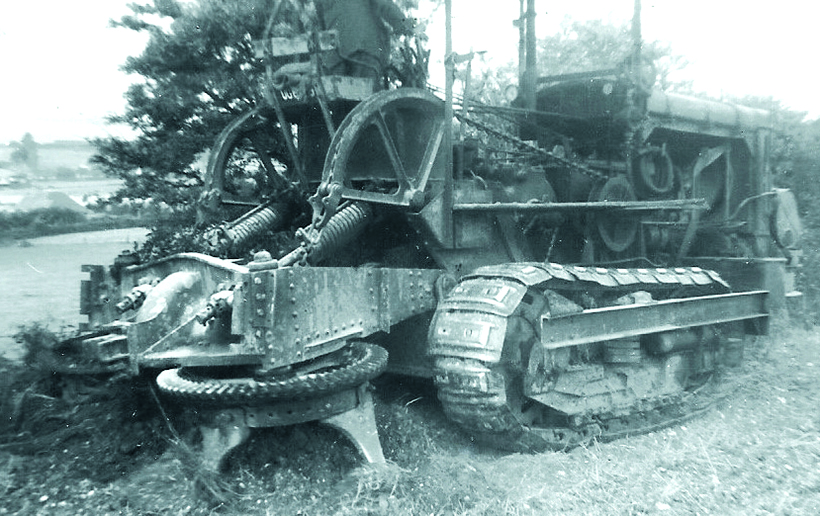 Said to have been taken sometime between 1955 and ’60 near Andover, this photograph shows the chalky soil found in the area.

Rare survivors
I have a photograph of it that dates from around 1955 to 1960, showing it working hard in a field somewhere near Andover. This was certainly the last example of this size of machine still working at that time. It’s worth remembering that a pair of the smaller, 80hp Gyrotillers were also retired at about the same time in Lincolnshire, and both are thankfully in preservation today. There were also smaller classes of Fowler Gyrotillers built, including a 40hp model (two examples survive today) and the lightweight, 30hp version.

I believe that 66 of the large, MAN 170hp diesel-engined examples were built, plus one 180hp version which, I believe, wasn’t sold. In practice, they proved to be very troublesome beasts and, unfortunately, were completely let down by their German engines. The basic, 1923 Norman Storey concept that Fowlers took on with the first completed machine with its juice-guzzling Ricardo/Brotherhood 225hp, six-cylinder petrol engine, was first seen in 1927. 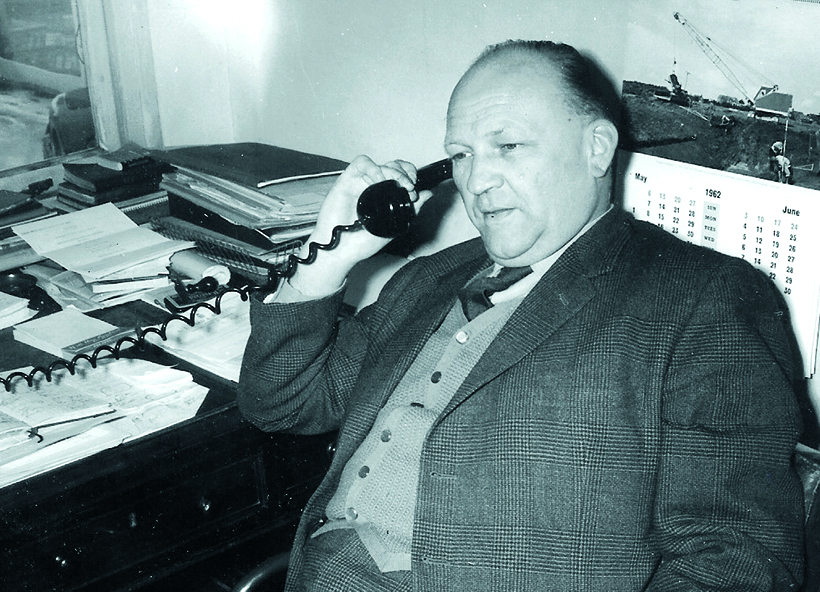 Managing director JSH Ward, on the telephone in 1962.

In the field
The Gyrotiller featured a pair of rotary rings at the rear end, that were fitted with multi-tines (skives) which spun in opposite directions to a depth of two feet. The unit was hitched to the back of the crawler, and mechanically driven from the transmission via a lift-chain arrangement.

Unfortunately, it was all too often the case that Gyrotilling ‘effect’ stirred-up all the subsoil (and even clay), bringing it to the surface and producing bog-like conditions which farmers didn’t want. Typically, this problem was exacerbated by operators who set the rotary blades too deep. 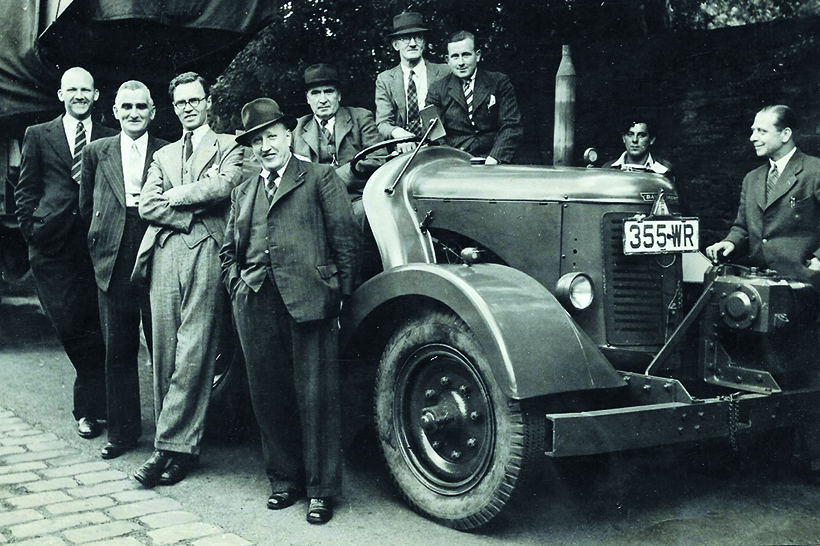 This photograph was taken during a post-war demonstration of the David Brown VTK1 Thresherman in the hills around Egham, Surrey. It was certainly underpowered with a Marshall SM drum and trusser behind.

In virgin, unbroken soil, and working on the sugar cane plantations in tropical conditions – particularly in Cuba and the West Indies – these machines did well; this was where they were really designed to work. However, in the sort of semi-wet conditions regularly found in the UK, the Gyrotiller proved far less effective.

However, the machine gained a new lease of life during the Second World War, when more land was made available for food production, and a number of the 33 units that had been sold on the home market, found themselves pressed back into service clearing tree roots and filling-in ditches. This included the example belonging to Arnolds of Brambridge (No. 20680), that worked in west Kent and was photographed by my grandfather. 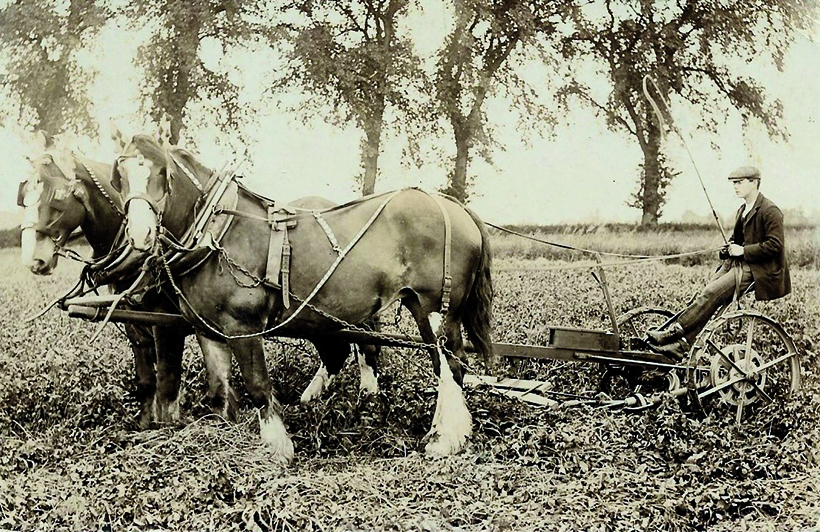 These look like Suffolk horses to me, stopped on the Wards farm. But what’s the crop that’s being cut?

Donor machine
The other Ward’s example, which I think the company bought secondhand, was used for spares when No. 20681 was being rebuilt. Sadly, I don’t know its number. However, in strange circumstances, it was suddenly scrapped. As we know, John Moffitt ended up with No. 20681 after John Clarke sold it, and it was on show at Stapehill for some years before being sold to Tom Wheatcroft. Today it’s with the Ward brothers in Yorkshire. It occasionally comes out, such as at the National Ploughing Championships at Crockey Hill, in 2016, when the Steam Plough Club’s Peter Longfoot was in charge of it.

Peter has just released a new agricultural book focussing on farming around Peterborough between the 1930s and the 1950s. It’s titled Moonshine, and features plenty of content about Norman Box’s Gyrotiller fleet. The softback, A4 format book comes thoroughly recommended, and is available right now from Classic Tractor Books. 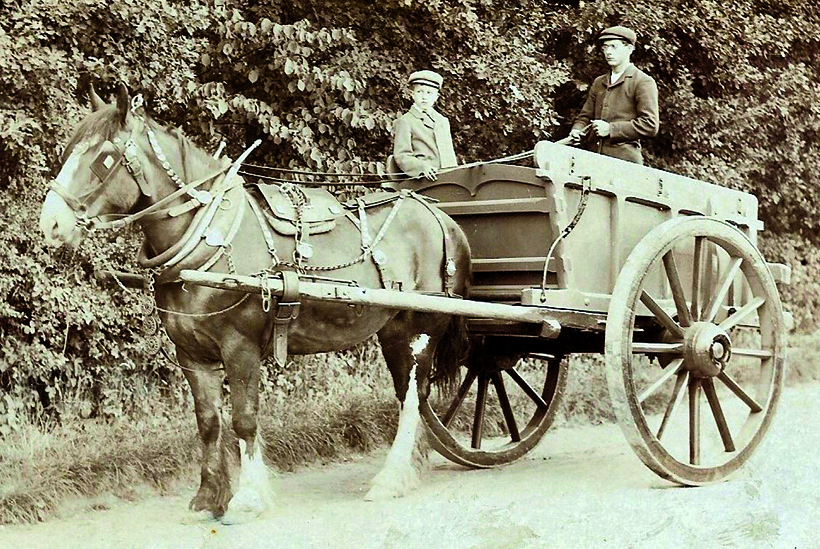 Working lives
Interestingly, Ward’s Gyrotillers worked all over the place. In fact, Walter Callaby recalled working for them in 1935, having previously been a Fowler demonstrator. He used to drive the Gyrotiller from midnight on a Sunday, through to the following Saturday night, with a pair of drivers (in theory, at least!). Afterwards, he went to work for Penfolds of Arundel, which was a large contractor that used steam into the 1950s, as well as tractors and a Gyrotiller, of course! Walter had good things to say about that company, but later went to work for Lockett’s, which ran a large fleet of Gyrotillers between 1943 and 1950.

However, the reliability of the large, indirect injection MAN 170hp diesel-engined Gyrotillers wasn’t good at all. They were hard to start, suffered from cracked heads and liners, and typically required an engine rebuild every year! More careful engine warming and cooling might have help limit the cylinder head problems, but there was no escaping the fact that the engine had been designed for less demanding, lorry-based applications, where it was successful.

The Twose tool bar and ridger and seat for the planter at the back, with the Clark forklift on the right.

Dealers no more
As for Wards, well, during the war it had various tractors on its fleet, including some Fordsons, Minneapolis-Moline, Olivers and a styled John Deere D, from what I can see. After the war it became a dealer for Nuffield, Twose, Track-Marshall, Claas, Clayson, New Holland, John Deere and then Leyland. Wards also had an extensive fleet of plant machinery, particularly for land drainage schemes, and favoured Priestman draglines.

As far as I’m aware, the company was wound-up in 1975, and its Thorpe Lea Engineering Works in Egham, Surrey, soon became just a memory. But readers might know different. If anyone seeing this used to work for the company and would like to provide some more information or memories, then please get in touch with Peter Love on 01323 833125. 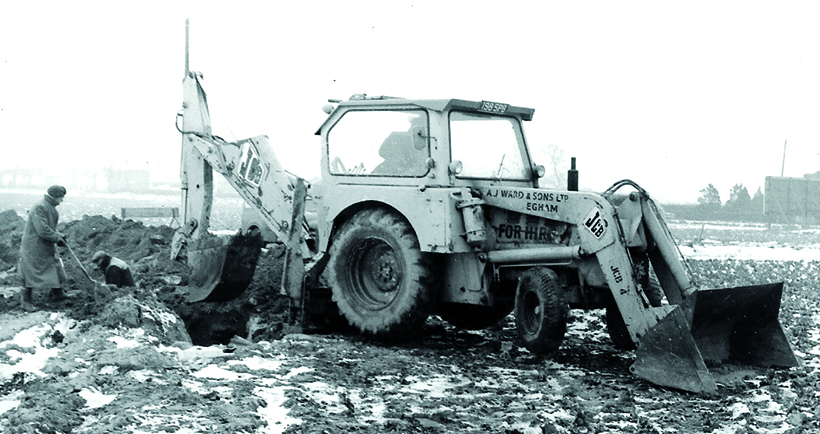 Perhaps not the best way of laying pipework in winter, but Ward’s somewhat clumsy 1962 JCB 4 was certainly ahead of its time. 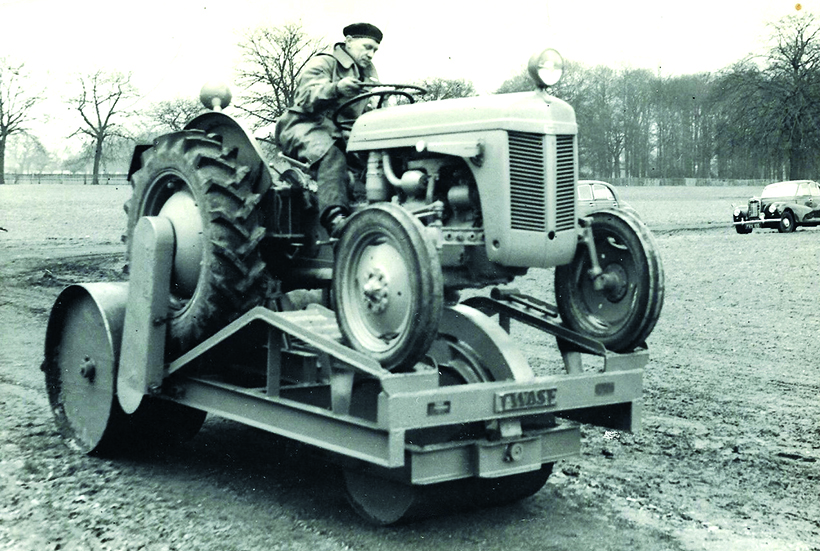 This is said to have been the prototype Twose Tractormount roller being demonstrated with a Ferguson TE-F. 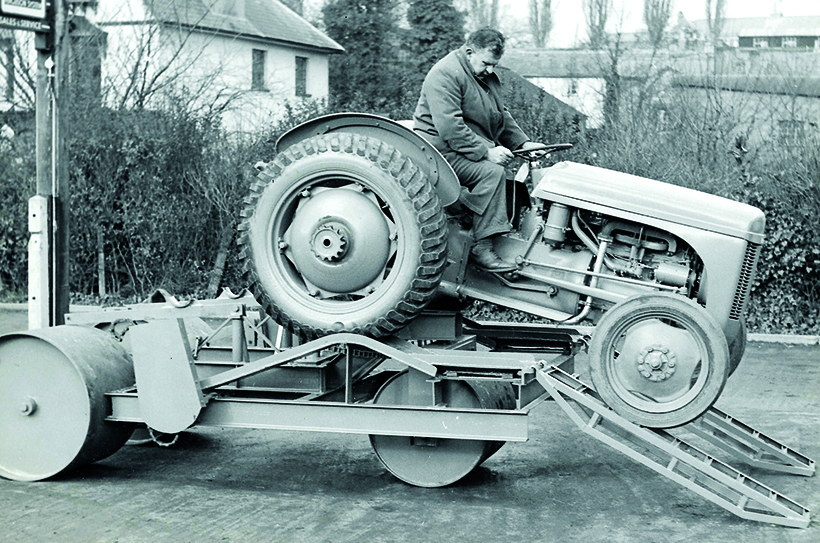 This time we see the prototype Twose Tractormount roller with a Ferguson TE-A on board. 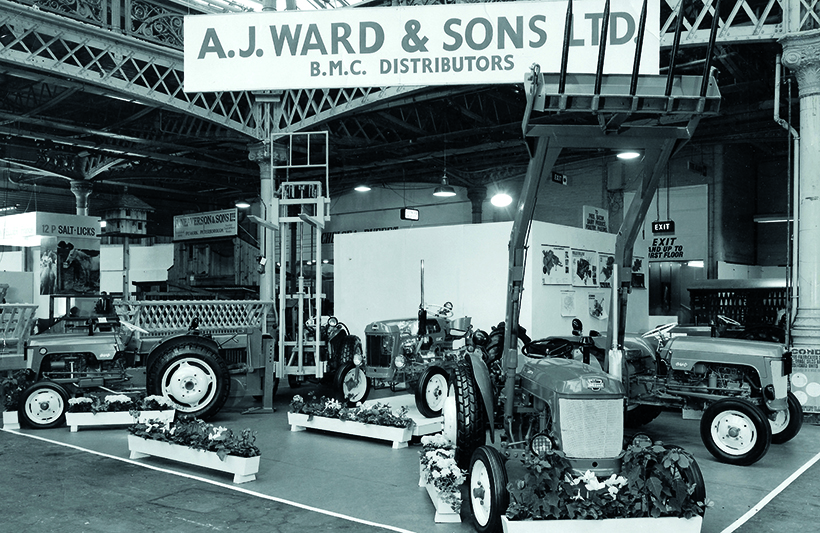 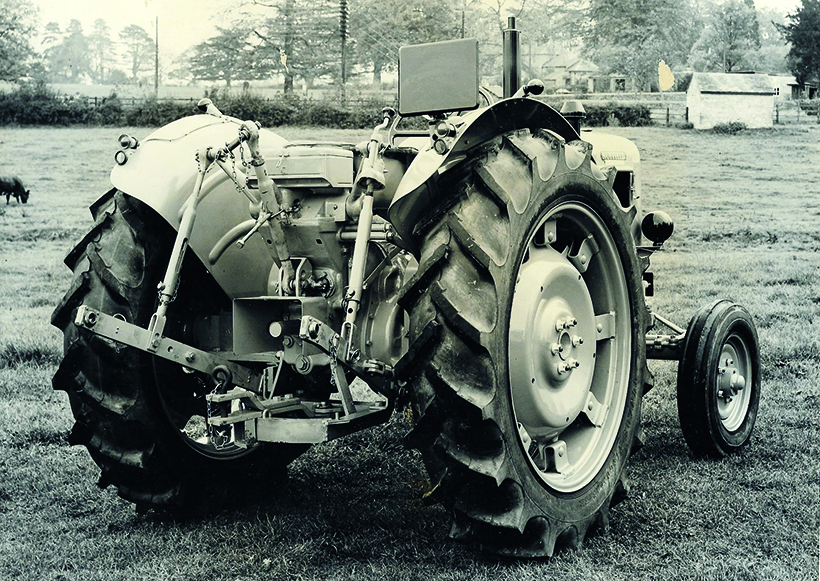 Showing off the rear end of a Nuffield Universal, with all the added extras that were offered with these tractors. 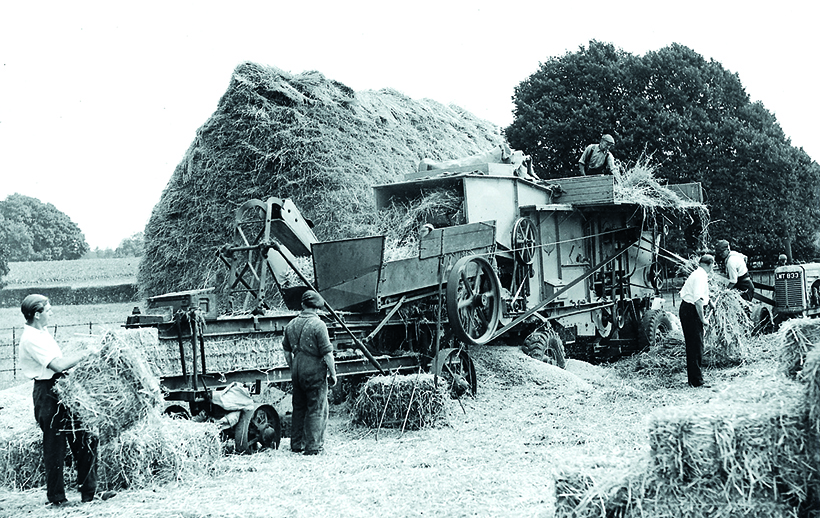 Taken in 1961/62 from what I can gather, this image recreates what it was like in earlier times, with the Marshall SM threshing drum and Minneapolis-Moline ZTU. 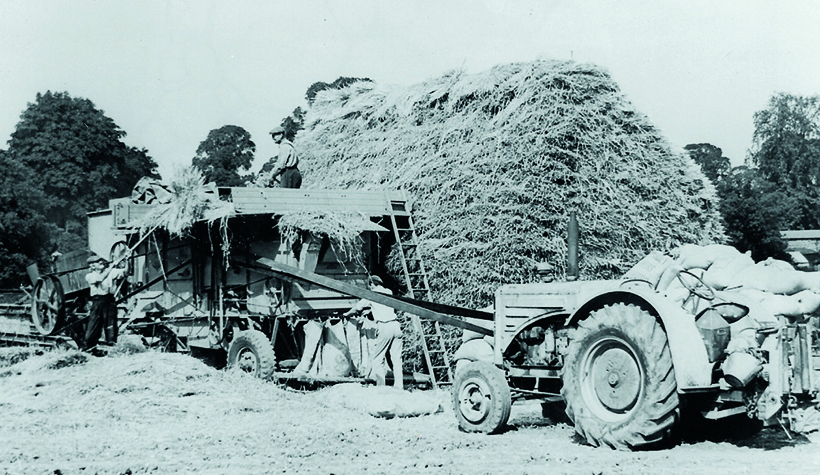 An image taken in the 1950s; the self-feeder on the Marshall threshing drum was known for being very snatchy, as the MM ZTU goes about its business. Did it last into preservation, as so much of Ward’s equipment did? 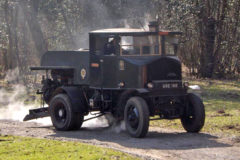 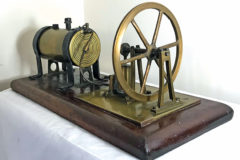