Collecting postcards is a hobby in itself, with plenty of people interested in the many different sorts available at collectors fairs and online nowadays.

All the scenes in the postcards shown here include vehicles, which is why Nina has picked them out of her collection for us, as well as showing us views, in the main, of picturesque places with, of course, more than a hint of nostalgia about them. The locations will be readily recognisable to those who know those areas. For others, they’ll represent pleasant views of places that they might like to visit in the future.

Many of the cards available at the seaside and beauty spots might often seem a little out of date to many potential buyers. But, to vehicle enthusiasts, recognising the cars and commercials often featured in the older images can be a real pleasure, and spending a contented minute or two doing just that is never time wasted, in my view.

For some people, the vehicles might seem an intrusion on the scenes, but for us they only add to the interest, and act as reminders that, more-often-than-not, trigger happy, nostalgic memories of the past. 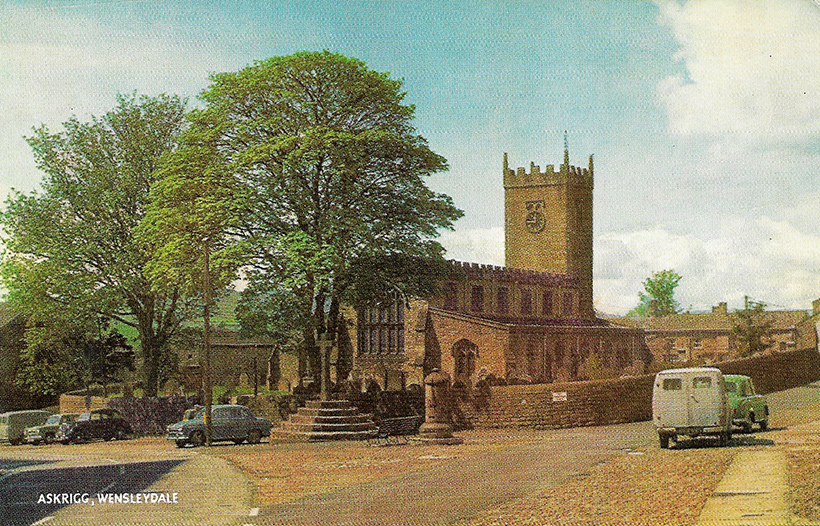 A colour view of picturesque Askrigg, in Wensleydale, North Yorkshire; famous for its association with fictional vet, James Herriot, and playing the part of Darrowby in the television series All Creatures Great and Small. Dating from the late 1950s, the postcard shows the parish church of St Oswald, and the Market Cross. On the right we can see the rear of a grey, early 1950s, Austin A40 van, and a green Morris Cowley. There’s another Cowley in grey, a black Wolseley version of the Morris 8 Series E, grey Ford 100E Prefect plus a later Austin A50 half-ton van, to the left. 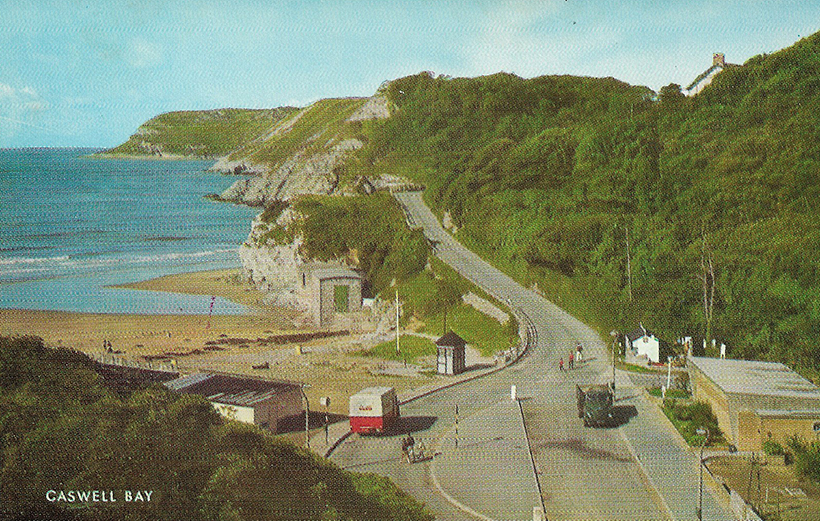 This postcard shows Caswell Bay (Bae Cas-wellt – meaning straw fortress, in Welsh). It’s a sandy beach that’s popular with tourists and surfers these days, on the south east of the Gower Peninsula, near Swansea, Wales. The vehicles in view in this early 1960s scene include a Wall’s meat and handy foods delivery van – probably a Bedford-Hawson – with supplies for the beach café on the left, standing in the bus turn-round, and a Morris WE tipper, most likely a council lorry. 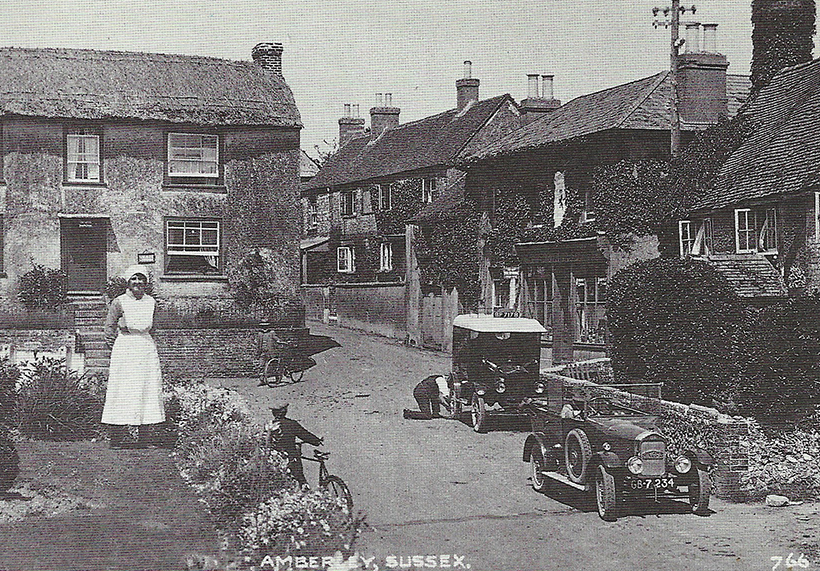 An older view – from the 1920s – of Amberley in West Sussex, near Arundel. These days it’s home to the museum in the old chalk pits, with lots of transport interest and regular and varied rallies. The vehicles in the scene include a Singer 10-26 Tourer and a Ford Model T van, having some attention paid to its rear wheel. Note the two old boys pushing their bicycles, and the young woman in her maid’s uniform. 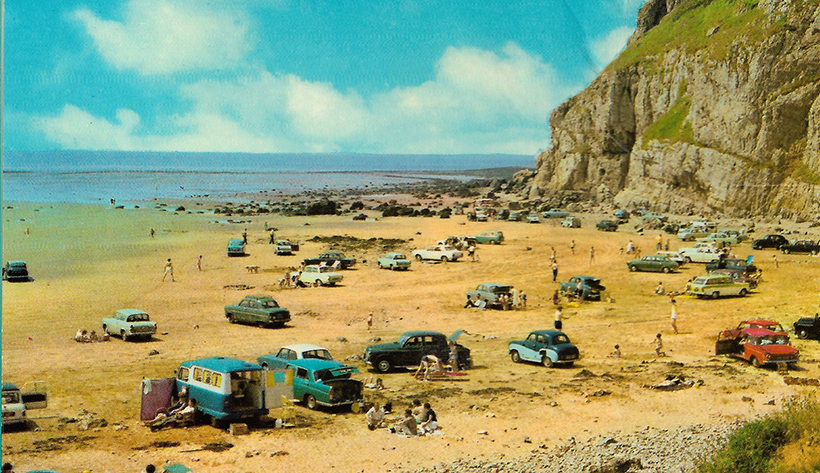 Another seaside scene, at Brean Downs Sands, in Somerset, with people picnicking by their cars on the beach. The postcard is date-stamped September 1st, 1970 (in Bridgwater). The newest cars in sight look like a white Ford Zephyr Mk IV and a blue Austin or Morris 1800. Particularly noteworthy are the Standard Atlas van-based motor caravan. There are a couple of Ford Cortina Mk Is, a 105E Anglia or two and a Mk I Consul; an ‘Auntie’ Rover, an Austin A30, a Vauxhall Victor Estate and lots more 1950s-’60s cars. 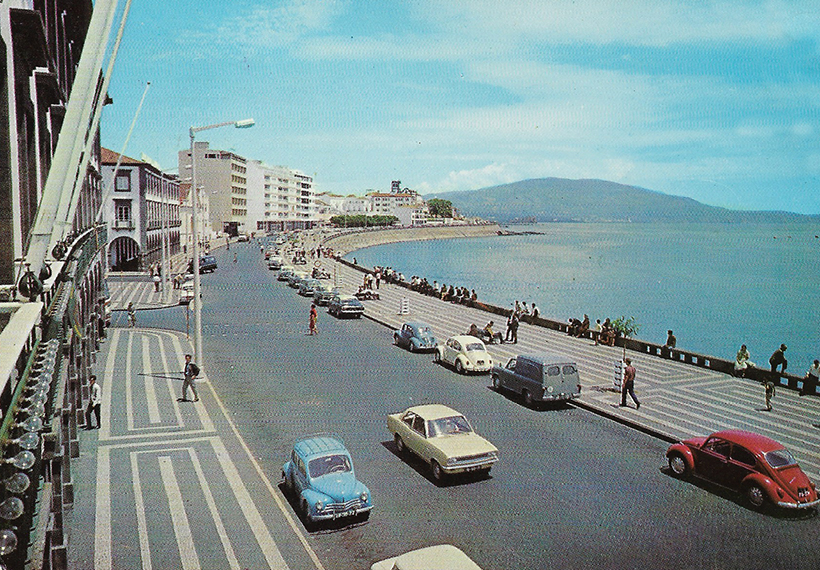 This is a foreign scene with a strong British connection. Sent by somebody on a cruise to their colleagues at Lloyds Bank, Halifax, it shows Avenida do Infante D Henrique – the seafront – at Ponta Delgarda, the capital of the Azores. The Portuguese-registered vehicles in view include a Morris half-ton van, based on the Cowley saloon, a couple of Volkswagen Beetles and Renault 4CVs, being passed by a Vauxhall Viva HB saloon, while it looks like a Bedford CA van behind the lamp-post. 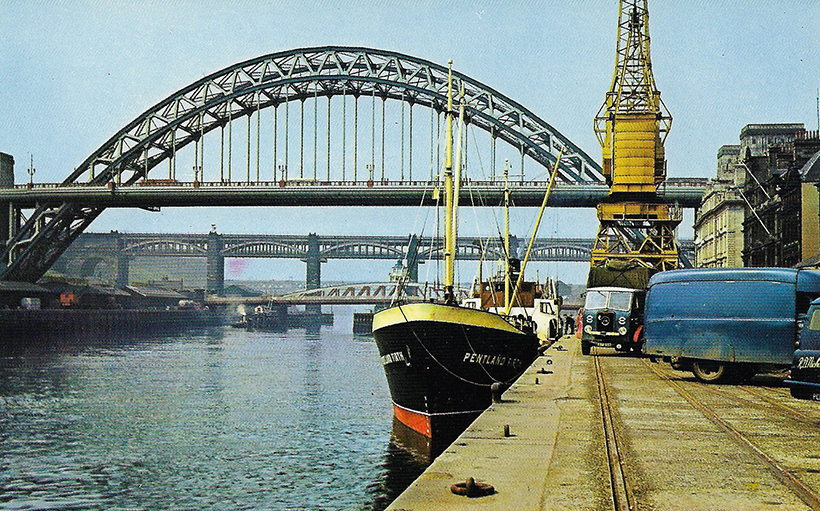 Three bridges in Newcastle-upon-Tyne; the Tyne Bridge, with the Swing Bridge and High Level Bridge beyond, linking Newcastle and Gateshead. In the foreground, the derrick of the MV ‘Pentland Firth’ (built 1955, ran aground and wrecked 1998, owned by Northern Coasters Ltd, Newcastle), can be seen unloading a classic Atkinson with bow-fronted cab, beyond the rear of a Ford ET6 or 4D panel van and a Bedford CA. 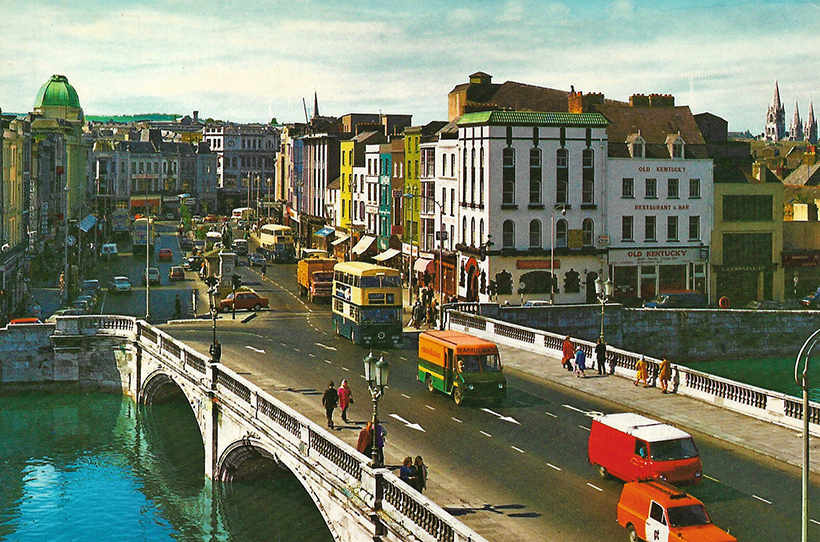 Over to the Republic of Ireland now, with St Patrick’s Street and Bridge, in the city of Cork. This photograph looks like one of those hand-coloured black and white shots, and has at least been ‘enhanced’. The late-1960s view shows, on the bridge, an orange Bedford HA van, followed by a red Commer PB and a multi-coloured Commer ‘Walk-Thru’ van. Then there’s one of those Leyland Atlanteans, new 1966-’74, bodied by CIE itself, using kits from Metal Sections, later re-engined with DAF or General Motors units, in its original blue and cream livery. It’s ahead of a Hino lorry, assembled in Ireland, and a CIE Leyland PD3 double-decker, among the other traffic in the distance. 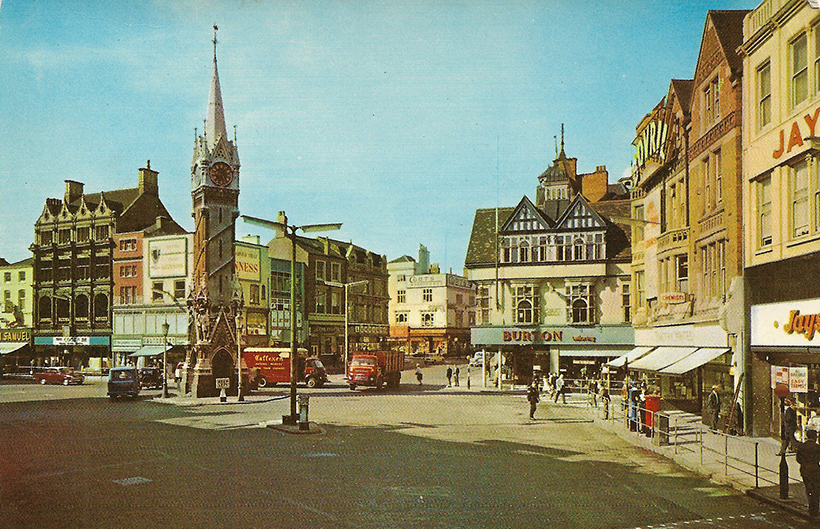 Perhaps less of a holiday venue this time, the Clock Tower in the centre of Leicester, seen from Belgrave Gate in around 1964. The tower was built originally as a solution to traffic congestion on the site of the town’s former hay and straw market, in 1868, where five major streets meet; Gallowtree Gate, Humberstone Gate, Haymarket (Belgrave Gate), Church Gate and Eastgates. It is still the centre of the shopping district. In this scene – surprisingly, without any Leicester Corporation buses in sight – traffic was circulating around the tower, including a BMC FG van, advertising ‘Caffexen Asthma Remedy From Your Chemist’, waiting for an Albion Reiver six-wheeled tipper to pass. On the left we can see the rear of a Standard Atlas van, following a Morris Eight, in front of a Ford Cortina. Shops in view include, on the left, H Samuel, behind the Albion, Lennards shoes, Burtons the Tailors – beyond which a Humber Hawk or Super Snipe was approaching, and Timothy Whites and Jays on the right. 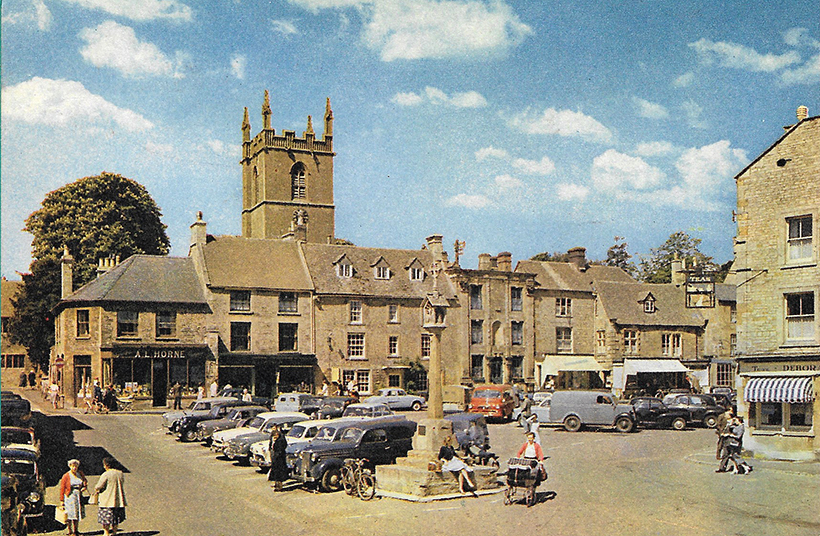 Here we see The Square, Stow-on-the-Wold, Gloucestershire, the irregularly-shaped market square with its quaint houses and shops and old market cross dating from when Stow was a centre of the wool industry, according to the description on the rear of the card. It’s still much the same today, apart from the vehicles to be seen. This card, from around 1961, shows several vans, a grey Ford E83W, red Bedford CA, Land Rover, grey Ford 300E and a couple of Austin A35s, plus a range of cars from a dark blue Ford V8 Pilot, several Morris Minors and Austins, a light blue Renault Dauphine at the rear and is that a white Simca Aronde in the middle of the line behind the cross? 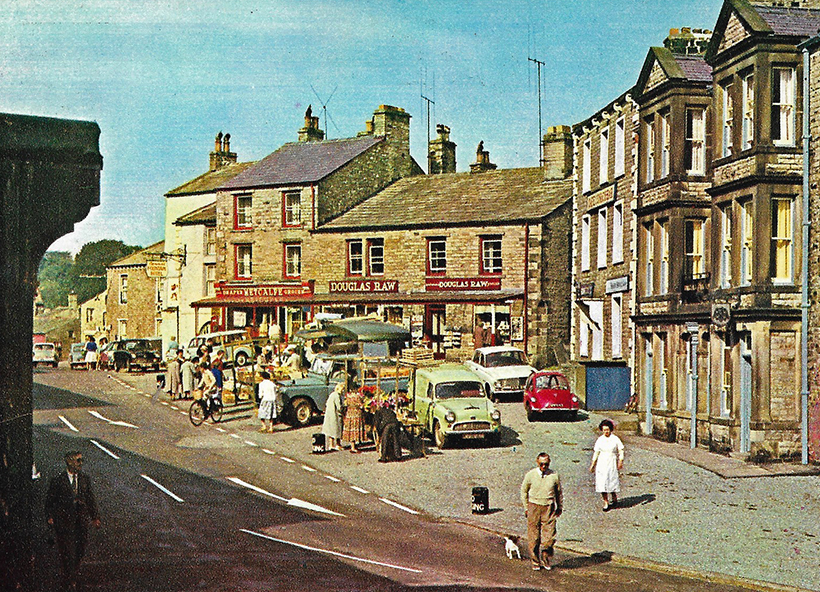 Back in Wensleydale, with the Market Place in Hawes. Surrounded by stone-built buildings and the moorland beyond, making the town a centre for sheep sales and shows, and a small, local produce market. In this circa 1964 scene, we can see the trader’s early Austin A55 van and Land Rover, and the top of a BMC LD van, with a Heinkel/Trojan ‘bubble-car’, Vauxhall Victor FB, Morris 1000 Traveller, Austin A50 and a Hillman Minx beyond. 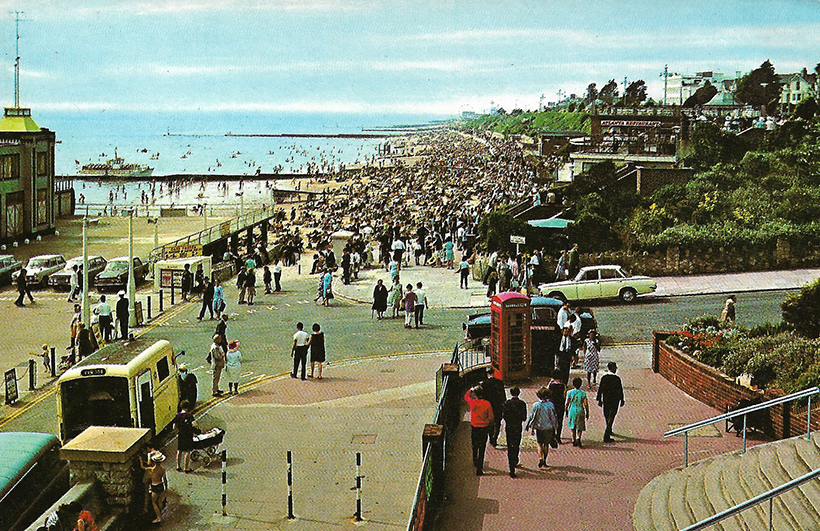 The seaside again, and the Pier Approach, Clacton-on-Sea, Essex, around 1965. We can’t identify the van, bottom left, but that’s a St John Ambulance Lomas-bodied Bedford K Type on duty, in case one of the many holiday-makers should be ill, or have an accident. Behind the telephone box is a police Austin Westminster and a Vauxhall PB Cresta or Velox. Over near the pier entrance there’s a Hillman Minx, a Ford Zodiac Mk 3 plus Austin Cambridge ‘Farina’ saloon and estate. 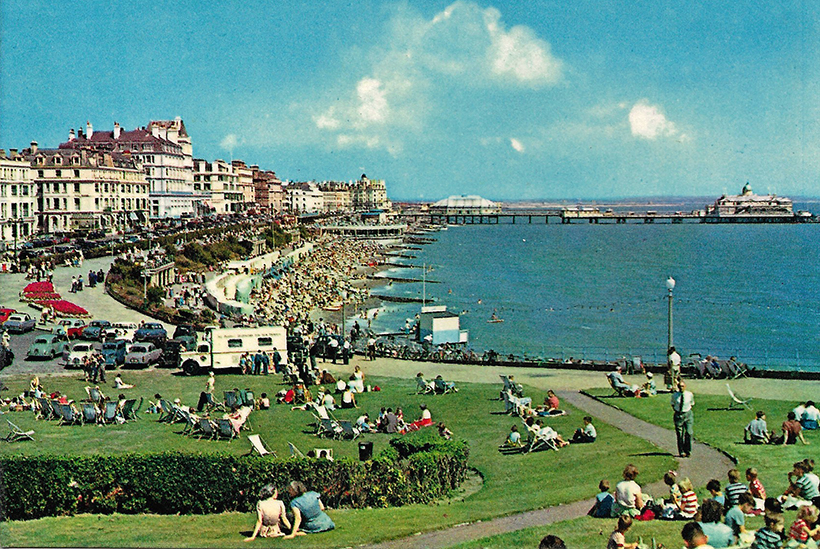 Another pier and esplanade and lots more holiday-makers in this scene showing the Grand Parade, from the Wish Tower, in Eastbourne. St John Ambulance had a bigger vehicle here in around 1958; a Bedford OL with a box-van body fitted out as an ambulance/mobile control centre. Among the recognisable cars parked beyond this are a black pre-war Austin 10, grey Ford 100E Prefect, blue E93A Anglia, white Austin A30, two different Morris Oxfords green and red/green, Ford Zephyr drophead in blue and saloon in white, blue Standard 8 and 10, and, to the right of the Bedford, a black Vanguard and Rover. 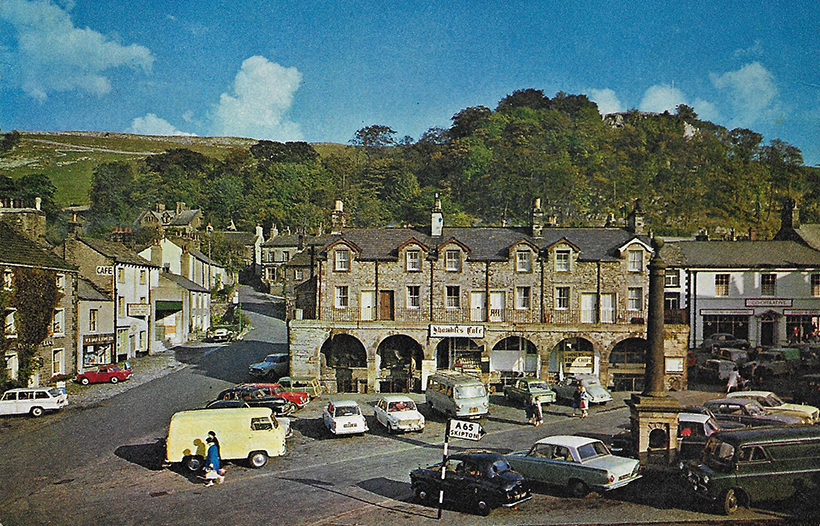 In Yorkshire again, and another market place photographed in mid-1960s; Settle, around the Old Cross, with the arcaded shambles with cottages on top. We can see several light commercials, a cream Ford 400E, a grey Austin or Morris J4 minibus, a dark green Bedford CA and, further back, a couple of Mini vans and an Austin A50 pick-up with a tilt. The cars included, behind the road sign for the ‘A65 to Skipton’, include an Austin A30, Ford Cortina and, in front of the shambles, a couple of Triumph Heralds – a red estate and a saloon. There’s also a Morris Oxford, Mini Countryman, Austin 1100, Hillman Imp and Morris Minor convertible. Over on the left, there are a white Austin A60 Estate, a red Triumph Spitfire and, further back, a Bond Minicar three-wheeler. 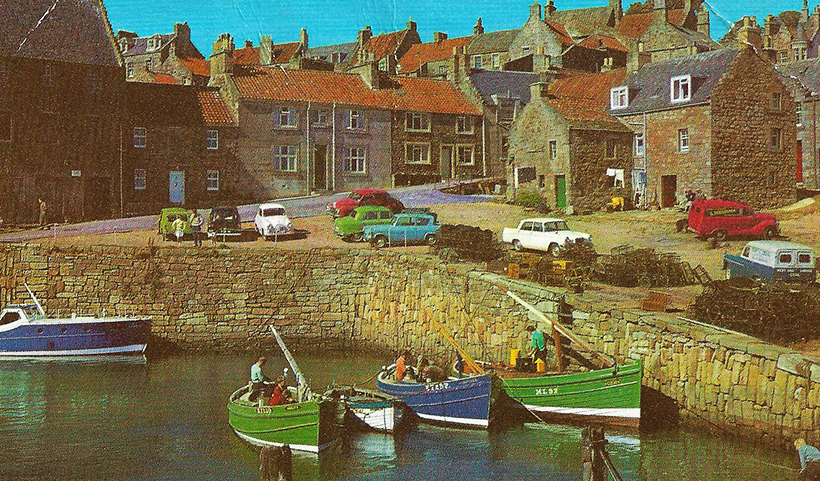 Lastly, here’s a postcard from Crail Harbour. Crail is a historic fishing village in the pretty, East Neuk of north-east Fife. Cobbled streets lead down to the miniature harbour, sheltered by cliffs and surrounded by historic fishing cottages, as we can see here. Beyond the fishing boats, the vehicles seen (left to right), are a green Mini van, black Ford Anglia, white Austin A30, red Morris Oxford, green Austin A50, blue Anglia 105E, white Riley Farina 4/72 and, on the right, two more vans, a red Austin A40 and a two-tone blue Commer Express, based on the 1950s Hillman Minx. Some of the colours look as if they have been ‘enhanced’ again, but it’s a lovely scene featuring lots of classic vehicles. 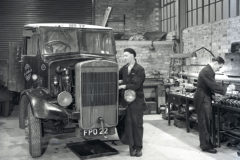 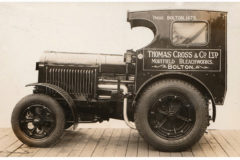