Conrad Waters recounts the terrible losses sustained by the Royal Navy and its Commonwealth allies between November 1941 and May 1942. 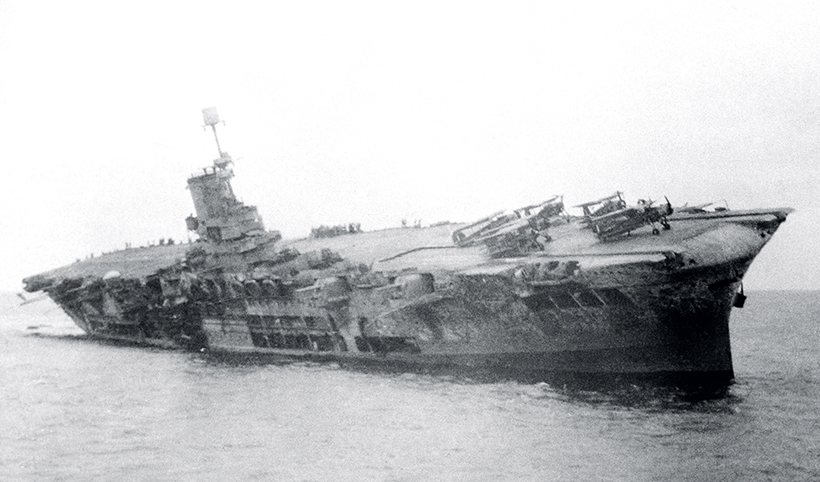 Terrible losses: The aircraft carrier HMS Ark Royal takes on a heavy list after being hit by a single torpedo from U-81 on 13 November 1941. She sank the following day. (Pic: Admiralty)

During World War II the Royal Navy, together with its Commonwealth allies, fought one of the most arduous campaigns in its history. Over 50,000 sailors and hundreds of ships of all shapes and sizes were lost, before victory could be declared after six years of battle. Among the materiel casualties were nearly 40 major warships: battleships and battlecruisers, aircraft carriers, and heavy and light cruisers. Altogether, these ships formed a large part of the navy’s total fighting strength.

One fact that is not commonly appreciated is that these losses were not evenly distributed throughout the conflict. From the middle of November 1941 the Royal Navy suffered a series of setbacks that saw it reach the nadir of its fortunes in World War II. In the six months and a day between 14 November 1941 and 15 May 1942, no fewer than 17 major warships were lost to enemy action. This article reviews those six dreadful months.

HMS Exeter, one of the heroes of the Battle of the River Plate, pictured on convoy escort duties. She was sunk by Japanese surface forces whilst attempting to escape the Dutch East Indies after sustaining heavy damage during the Battle of the Java Sea. (Pic: Author’s Collection)

Rise of the U-boats
The start of the Royal Navy’s run of misfortune can be traced to the German decision to send U-boats to the Mediterranean, in the autumn of 1941, to help reduce the pressure on their hard-pressed Italian allies. Although inevitably weakening the crucial campaign against the Atlantic convoys, this move brought rapid benefits. On 13 November 1941 the aircraft carrier Ark Royal was struck by a single torpedo from U-81, while she was returning to Gibraltar after ferrying aircraft to Malta. Design weaknesses and poor damage control saw her sink the following day.

A further major Mediterranean casualty occurred less than two weeks later, when the battleship Barham was hit by three torpedoes launched from the submarine U-331 on 25 November 1941, while the battleship was operating with her sisters Queen Elizabeth and Valiant in the Eastern Mediterranean. The elderly ship stood little chance of survival against such damage. She sank within minutes following a massive magazine explosion that was famously caught on film for posterity. There were 862 fatalities.

The battleship Barham was destroyed by a cataclysmic magazine explosion after being torpedoed by U-331 on 25 November 1941. (Pic: Author’s Collection)

The Mediterranean U-boats struck again on the night of 14-15 December 1941, when the light cruiser Galatea was torpedoed by U-557 on the approaches to Alexandria naval base. As with Barham’s loss, the ship sank rapidly and casualties were heavy. But U-557 did not survive long to savour her success. She was rammed and sunk by the Italian torpedo boat Orione, less than 48 hours later in a case of mistaken identity.

The U-boats achieved other successes during this period. One was the destruction of the cruiser Dunedin in the Central Atlantic on 24 November 1941. The veteran cruiser succumbed to two torpedoes fired from U-124. Again, there was a heavy human cost, as only 67 of a total crew of 486 survived her sinking. A month later – on 21 December 1941 – the escort carrier Audacity was lost in the North Atlantic to the torpedoes of U-751.

Repulse, seen at Freetown in September 1941, was sunk alongside the battleship Prince of Wales on 10 December 1941 in arguably the greatest disaster to afflict the Royal Navy in the course of World War II. (Pic: Author’s Collection)

Disaster in the Far East
By this time, attention was turning to the Far East, where another series of calamities was rapidly unfolding. The region had already experienced the Royal Australian Navy’s worst loss of the war when, on 19 November 1941, the light cruiser Sydney had been engaged by the German raider Kormoran in an action which resulted in the destruction of both ships. The cruiser’s entire 645-strong complement went down with their ship, over a quarter of the Royal Australian Navy’s casualty list throughout the whole of World War II.

Worse was to follow. On 10 December 1941 the Royal Navy suffered what was arguably its blackest day of the conflict when the capital ships Prince of Wales and Repulse were sunk by Japanese aircraft in the South China Sea two days after the outbreak of war in the Far East. The ships were heading to intercept Japanese invasion convoys in defence of Malaya when a combination of bad luck and lack of air cover ensured their rapid demise. The defeat represented both the end of the battleship era and a major milestone along the road to the British Empire’s demise.

The cruiser Dorsetshire at Trincomalee a few days before her loss to Japanese dive bombers on 5 April 1942. (Pic: Admiralty)

The series of defeats continued into 1942 against the backdrop of Japan’s seemingly invincible advance. The aftermath of the Battle of the Java Sea saw further cruisers disappear below the waves. During the night of 28 February-1 March 1942, Sydney’s sistership Perth fought the Battle of the Sunda Strait alongside the US Navy heavy cruiser Houston, while she was attempting to escape the doomed Dutch East Indies. Low on ammunition after previous fighting, both Allied ships succumbed to waves of torpedoes during a desperate engagement against far superior Imperial Japanese Navy forces.

The next ship to go down was the cruiser Exeter, a previous hero of the Battle of the River Plate. She attempted to escape Java later the same day by the same route attempted by Perth and Houston, but previous battle damage had left her in no shape to fight a sustained action. Intercepted by Japanese warships, she was sunk by torpedoes after being immobilised by shell hits to her remaining operable boiler room. The British destroyer Encounter and her US Navy counterpart Pope, were sunk in the course of the same engagement. Japan’s raid into the Indian Ocean in April 1942 brought further losses. On 5 April 1942 the County class heavy cruisers Cornwall and Dorsetshire were overwhelmed by Aichi D3A dive-bombers from the aircraft carriers Hiryu and Soryu, while detached from the main Eastern Fleet. Four days later, the elderly aircraft carrier Hermes met the same fate off Trincomalee in a dismal finale to the Royal Navy’s string of defeats in the Far East. 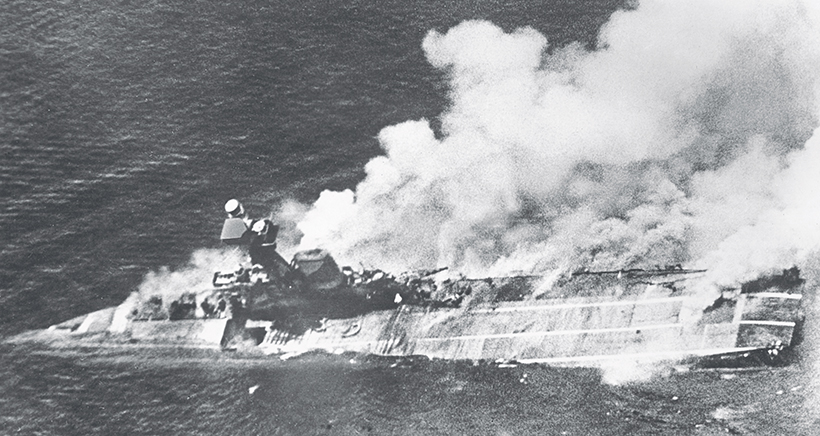 The aircraft carrier HMS Hermes slips beneath the waves after an attack by Japanese dive bombers on 9 April 1942. She was the first ship to be designed as an aircraft carrier and also the first of her kind to be lost to carrier-based aircraft. (Pic: Author’s Collection)

Arctic action
The Royal Navy had experienced significant losses in other theatres while events in the Far East ran their course. A further setback occurred in the Mediterranean on 19 December 1941. Here, Force K – a raiding force of light cruisers and destroyers – had gained considerable success against Italian convoys. Its luck ended when it ran into a minefield, losing the cruiser Neptune and destroyer Kandahar in the process. The impossibility of rescuing Neptune’s crew from the mined area resulted in appalling casualties. There was ultimately only one survivor from her circa 765-strong crew.

The following year, on 11 March 1942, the Dido class cruiser Naiad became another victim of Mediterranean U-boat activity. She was sunk after a hit from a single torpedo launched by U-565 off Sidi Barrani, while she was returning to Alexandria from an operation in the Eastern Mediterranean. She was one of four of the class lost in the Mediterranean during the course of the war.

Only one crew member survived when the cruiser HMS Neptune was lost to an Italian minefield in December 1941. This photo shows her operating in the Mediterranean a few months earlier. (Pic: Admiralty)

The last pair of losses from this six-month period occurred within two weeks of each other in the very different conditions experienced by the Arctic convoys to Northern Russia. The events were related. In March 1942 the cruiser Trinidad sustained significant damage when she was hit by one of her own malfunctioning torpedoes during an action that saw the destruction of the German destroyer Z26. The crippled cruiser subsequently struggled into Murmansk for temporary repairs. The following month saw the cruiser Edinburgh arrive in Northern Russia carrying steel plates to assist with Trinidad’s repair. Departing for home with a load of gold bullion – Russian payment for American war supplies – Edinburgh was struck by two torpedoes from U-456 on 30 April 1942 and severely damaged. Two days later, on 2 May, a flotilla of German destroyers intercepted the disabled ship. In the course of the fierce action that followed, Edinburgh’s fate was sealed by a third torpedo hit after she had, herself, inflicted fatal damage on the German Hermann Schoemann.

The Dido class cruiser HMS Naiad was one of the four members of the class to be lost in the Mediterranean when she was torpedoed by the German U-565 in March 1942. (Pic: Admiralty)

The culmination of the story came on 15 May 1942 when the patched-up Trinidad was homeward bound. Heavy German air attacks resulted in a bomb hit near the original damage, blowing open the temporary repairs and starting an uncontrollable fire. The cruiser was abandoned and scuttled by her escorting destroyers after her crew had been taken off. A number of them – including force commander Rear-Admiral Stuart Bonham Carter – had been through the same experience aboard Edinburgh just two weeks previously. 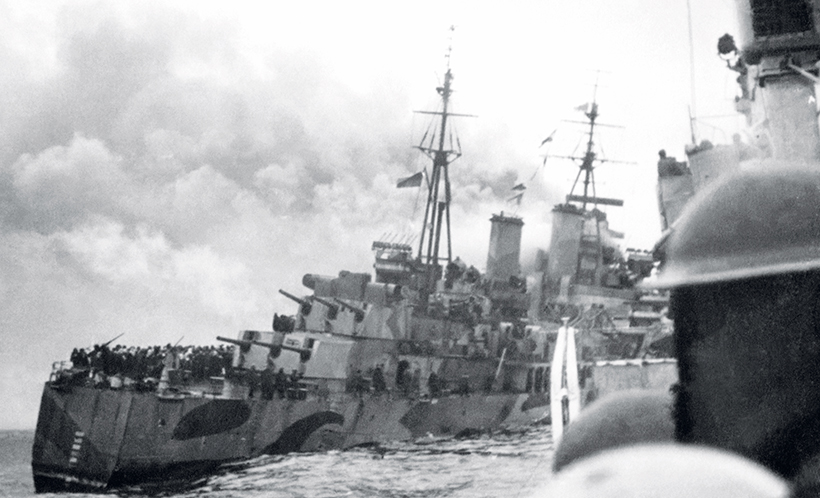 Smoke billows from the Fiji class cruiser HMS Trinidad as a destroyer moves alongside to rescue the stricken ship’s crew on 15 May 1942. (Pic: Admiralty)

A rapid recovery
In the course of six months, the Royal Navy had experienced a scale of loss greater than the total naval forces deployed by all but a few of the world’s fleets. However, despite the many disasters that it had suffered, its recovery was to be swift, for two main reasons.

One was the success of the Royal Navy’s wartime construction programmes. In the period between November 1941 and August 1942 the navy commissioned the battleships Anson and Howe; the cruisers Gambia, Jamaica, Bermuda, Charybdis, Cleopatra, Sirius, Scylla and Argonaut; and the escort carriers Archer, Avenger, Biter and Dasher. By the autumn of 1942, therefore, the majority of losses had been made good with modern ships. Within a further year, the navy was struggling to find crews for all the ships that were available to it.

Commissioned in May 1942, the Dido class cruiser HMS Sirius was one of a stream of modern warships that arrived in the course of the year to replenish the Royal Navy’s heavy losses. (Pic: Admiralty)

The other factor was the changing fortunes of the Allied cause during this period. In particular, the entry of the United States into the war swung the strategic balance. By the end of 1942 the worst of the Axis’ successes were already history and the level of naval casualties was in steep decline. Although there were to be further setbacks in the years to come, the path to victory was clear. 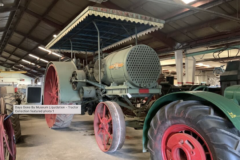 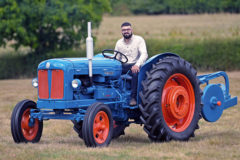