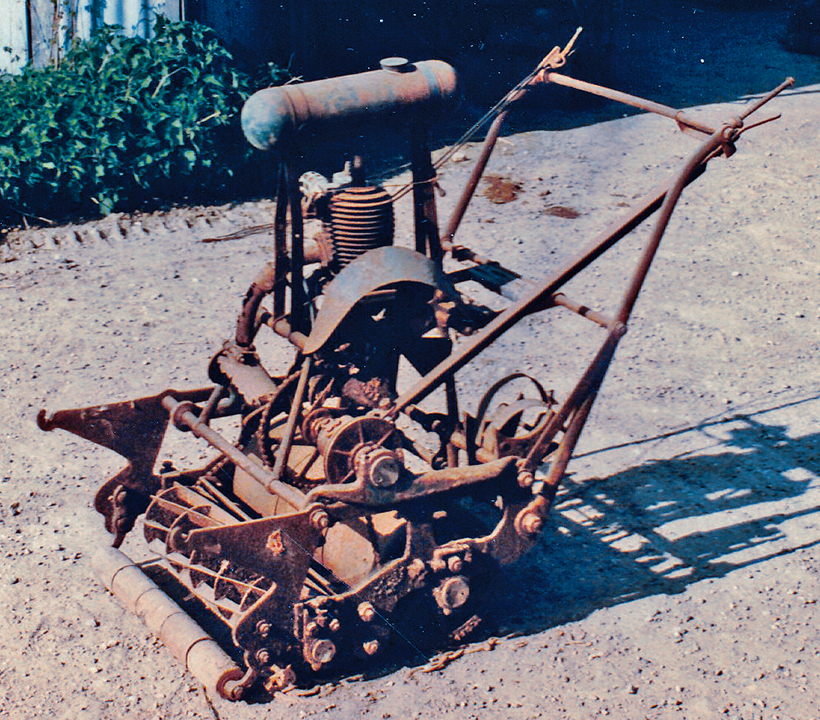 The founder of the company, Charles H Pugh, was born on June 6th, 1840.The second son of Richard Pugh of Newtown, Montgomery, Charles was schooled at Welshpool Grammar. On leaving school he travelled by steamship to Canada to earn his fortune but, by the time he was 18, he was back in Montgomery and working in his father’s ironmongery business. By 1860 he’d moved, becoming the manager of Messrs Mellard of Uttoxeter – manufacturers of dairy equipment – where he created his first patent, in the improvement of cheese making machinery. The patent proved very successful.

Deliveries by Atco in 1926 were made, using a converted motor cycle and sidecar, by Rudge Witworth Ltd; a subsidiary company.

By 1867 he was married to Elizabeth Vernon of Uttoxeter, and had purchased his first business, Messrs Brooks of Rotherham, in the West Riding of Yorkshire. This was a jewellery business but also an ironmongery wholesaler for the repetition industry, which served the textile mills in Yorkshire and Lancashire, selling parts such as lappets, threadguards and snarlcatchers.

Five years on, in 1872, Charles H Pugh had sold that business and moved his family of five children to Birmingham, the powerhouse of the world for the metal industry at that time. First, he founded a screw, rivet and bolt works in Dean Street and Bishop Street then, building a new premise in Rea Street, named it Whitworth Works. The census of 1881 listed him as a bed manufacturer. It appears that he was following manufacturing trends and becoming very successful at it. 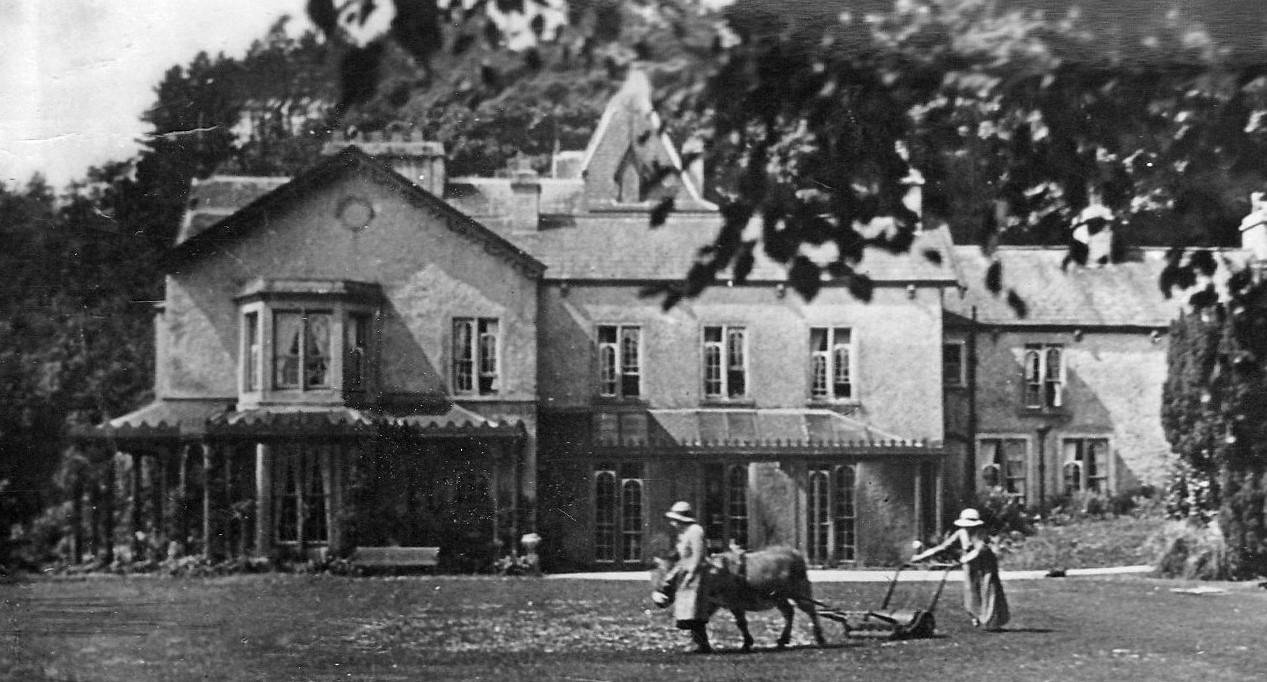 The ‘death of the donkey’, with its leather shoes worn while walking on the lawn, led to the design of the Atco Motor Mower.

The largest explosion in trends was that of cycle manufacture. In 1886 Charles H Pugh’s first son, Charles Vernon, joined the business and, by 1890, had become a partner. The family business became manufacturers and suppliers of screws, ironmonger’s sundries and of bicycle fitting and stampings to other trade manufacturers.

In 1891, Charles H Pugh began to manufacture his own bicycles, and formed the Whitworth Cycle Company, with his first son Charles Vernon Pugh becoming MD, and his second son John Vernon Pugh as works manager. The business had rapid success and, by 1893, had become a private limited company with a capital of £50,000 in £1 shares. 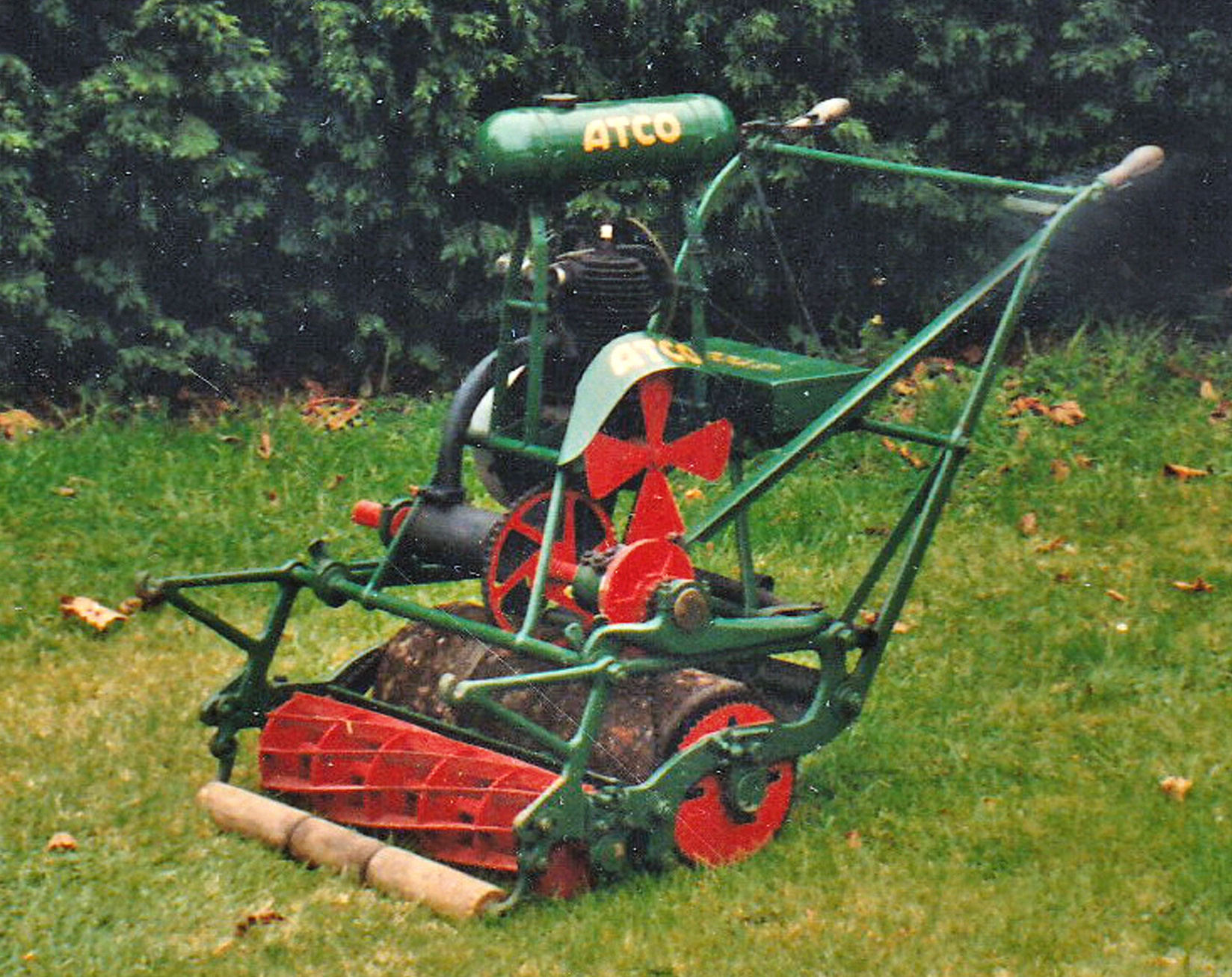 The famous Atco Standard 22-inch of the first season of 1921, also known as the Oval frame. This is one of 900 machines made for that season.

Looking for larger premises, in 1894 Whitworth’s amalgamated with the Rudge Cycle Co, of Coventry, and formed Rudge Whitworth Ltd. That same year, after years in development, Charles developed a jointless wheel from steel, and opened another business called the Jointless Rim Co. By 1897, Charles H Pugh was suffering with ill health and sold his interests in the business, spending his last few years travelling in the USA. He died at his home in Penns, near Birmingham, on April 9th, 1901, in his 61st year. 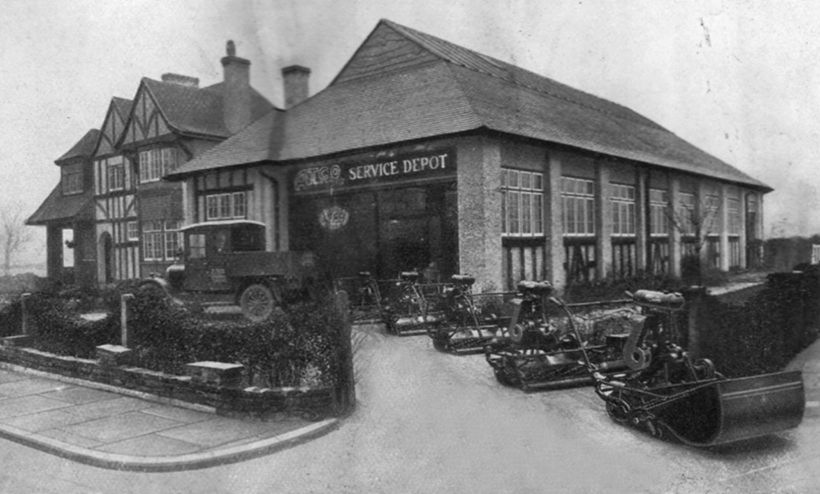 The Atco London Depot was at Croydon, some way out of the big city. 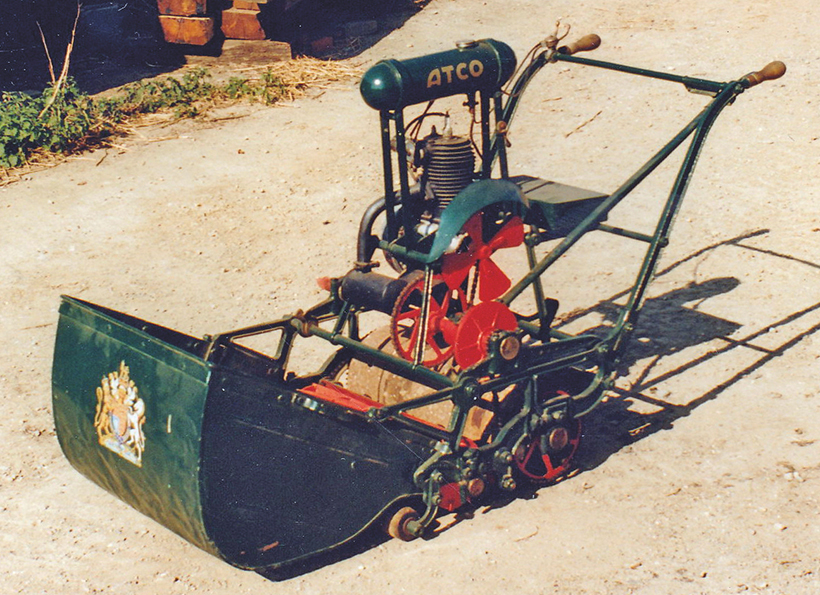 The Atco Standard 22-inch made for the 1922 season, with the modified malleable iron ‘H’ frame.

In 1911 John Vernon patented the Senspray carburettor, which was used on early Rudge motorcycles, as well as by other engine manufacturers including Villiers. Pugh’s by this time had been collecting companies which worked under the same umbrella, an example was Alfred Appleby Cycle Chain.

In 1914, with the Great War, the factories began to produce munitions; charger clips for guns, mess tins, wire cutters for the Royal Engineers, and cycle chains. It also made Claudel Hobson carburettors for a sub-contract with Rolls-Royce, for Vickers Vimy aircraft. The war ended in 1918, and the factories became redeployed for civilian needs. Regeneration was slow and, by 1919, Chas H Pugh’s Ltd was on the lookout for fresh fields. 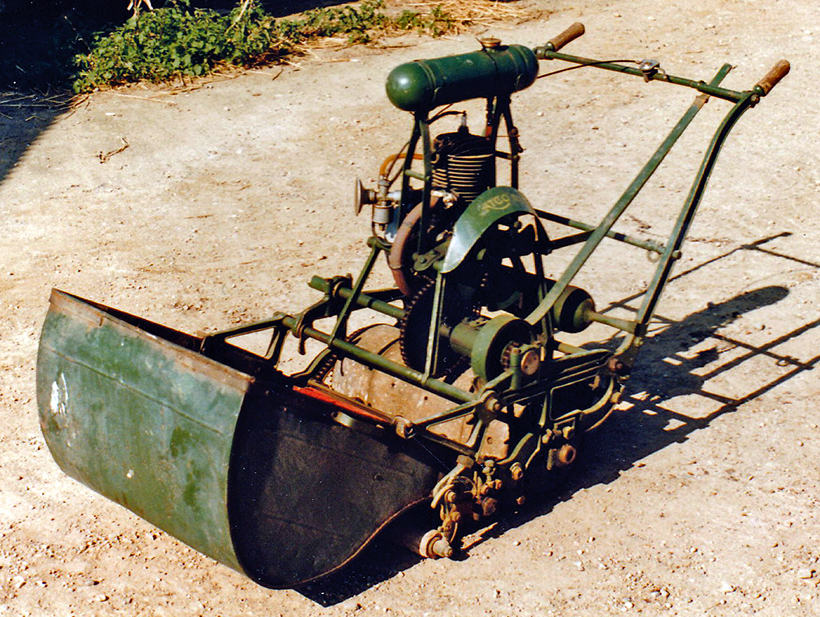 The Atco Standard 22-inch made for the 1923 season, with modified Villers 249cc engine.

There are many different stories told of how the famous Atco Standard lawn mower came about. Given my own involvement with Atco (in the early 1980s), together with researching original boardroom notes, I came to the following conclusion. Charles Vernon Pugh had extensive lawns around his house which were cut with a mower pulled by a donkey. When the donkey died, Charles, being interested in early motoring, asked Bull, MD of the Atlas Chain Co, (a subsidiary of Chas H Pugh Ltd), to design a motor mower, which could be used on his grounds and the local cricket pitch. This could account for the unusual cutting width of 22 inches. 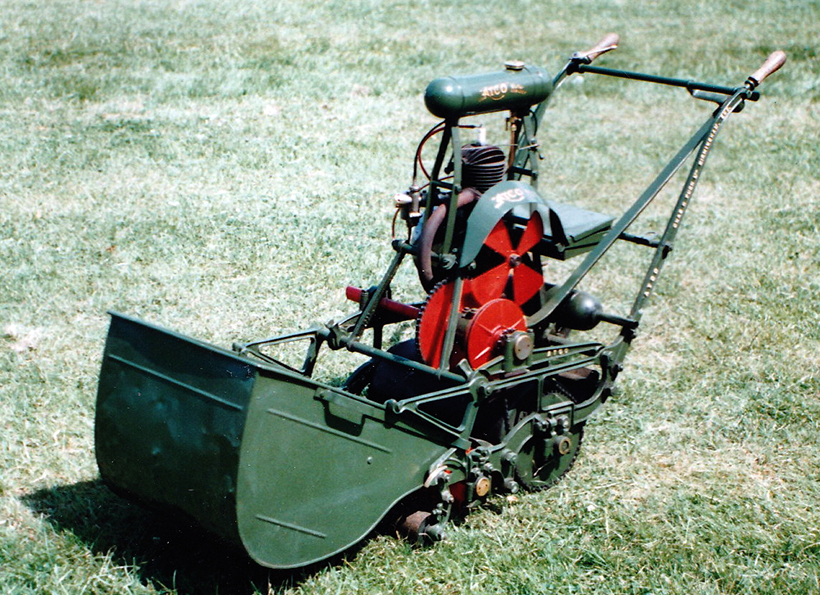 Atco Standard with Villiers two-stoke engine; a 16-inch machine made for the 1926 season.

The machine produced run quite well, with the engine built high above the frame and the cutting cylinder. This idea was not theirs alone however, as other small contemporary businesses were developing similar motor mowers on open frameworks, but possibly not with the same acumen as Pugh’s (by chance this prototype still survives and is within the Hall & Duck Trust). The frame is all cast iron; the sides appearing to be solid, but then profiled out to present a frame. The engine, was an original Villiers two-stroke of 269cc, with a Senspray carburettor made by Chas H Pugh Ltd. 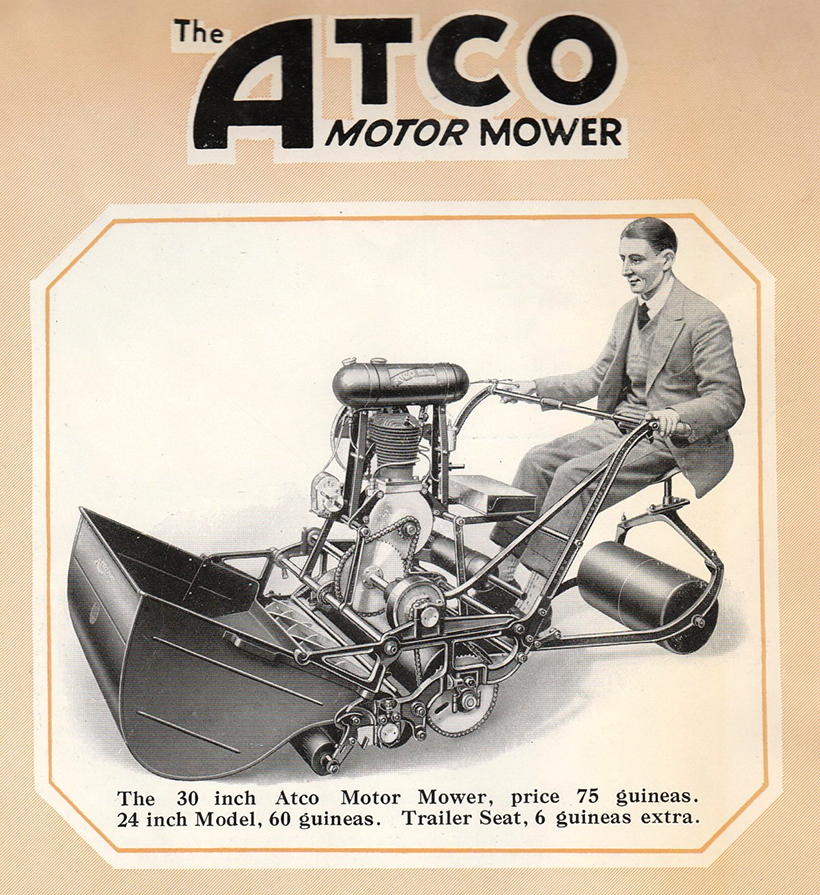 At the end of 1919, Charles Vernon secured an agreement from his board to proceed on this new project, which was financed in 1920 with a £50,000 bank loan.

The brand name of Atco came from the Atlas Chain Company – having to be short and catchy. It was registered where ever possible across the world by Chas H Pugh’s Ltd. 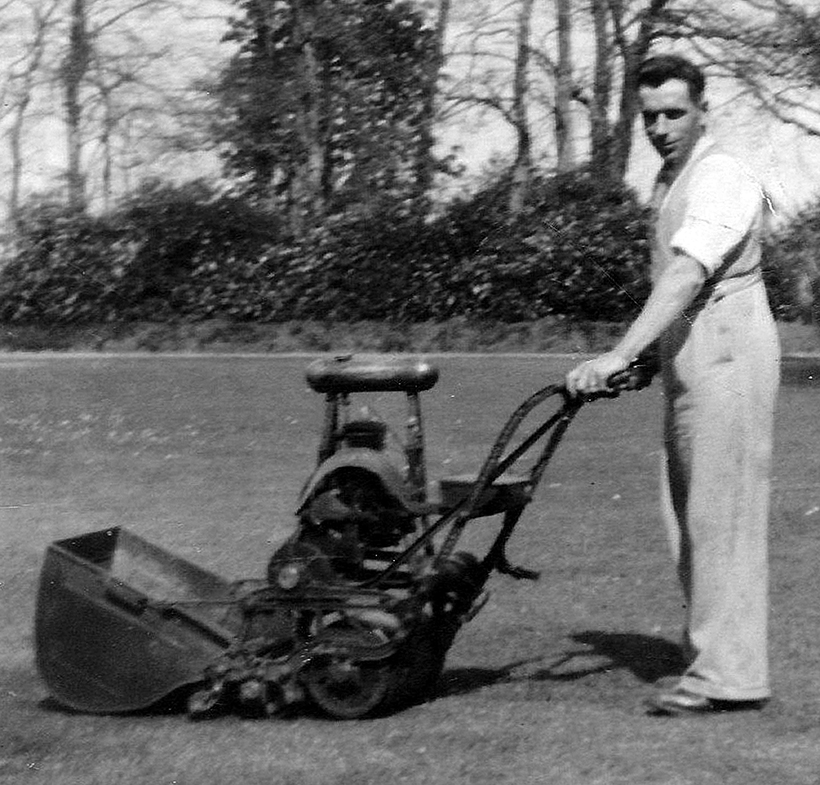 The production of the first Atco Standards in 1921 met with many setbacks. The worst drought since 1911, a post-war slump, plus the triple-lock National strikes on the railways and a drop in coal prices. Also, Pugh’s malleable iron foundries were closed. The job of casting the frames was farmed out to Qualcast of Derby. Nine hundred 22-inch width machines, powered by a modified Villiers two-stroke engine of 249cc, were made available.

Trying to sell into a new area where long-established businesses had their own dealerships, Pugh’s approach was to lead on price and direct selling. So, £75 was asked for their machines, after a no-obligation home trial. Delivery was organised with the aid of their subsidiary company, Rudge Whitworth Ltd, using a converted motorbike and side trailer. 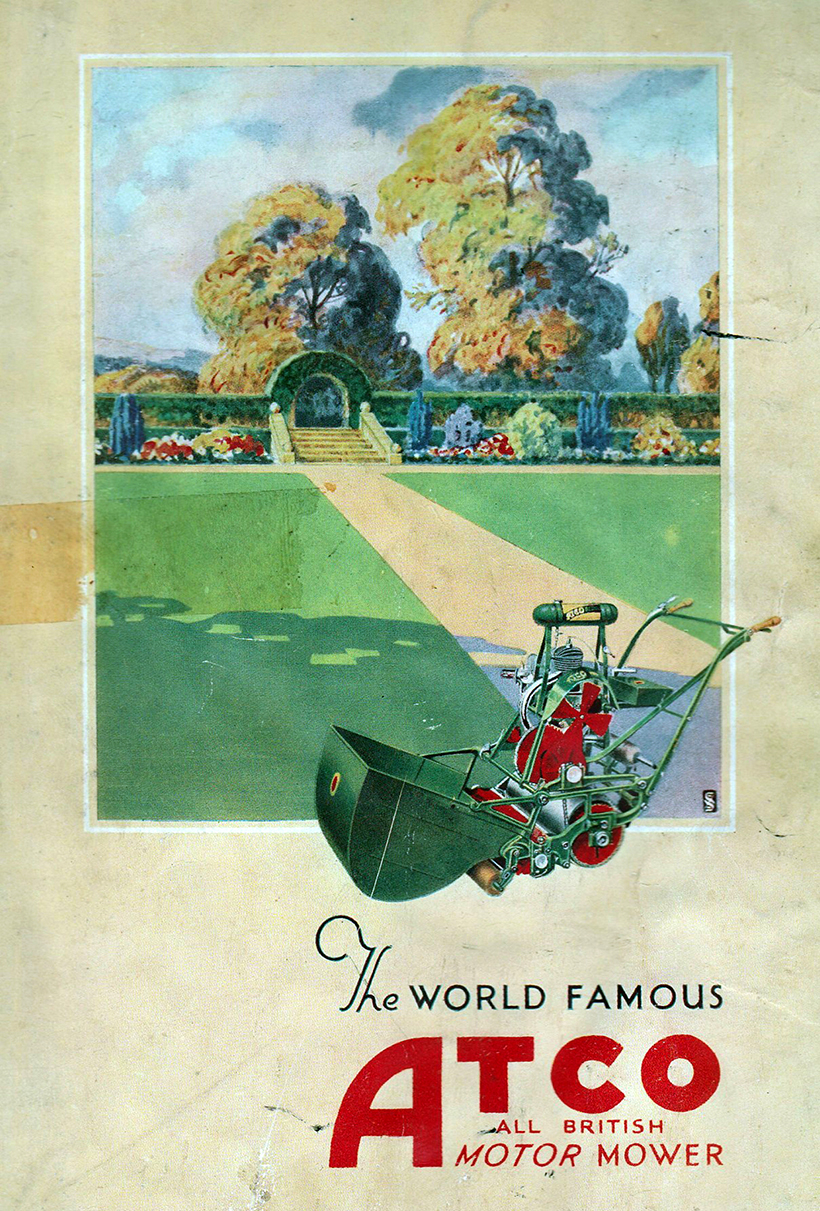 The front cover of an Atco brochure from 1928.

On August 23rd, 1921, Charles Vernon Pugh died, never to see the full development of the Atco motor mower. His successor as MD was his son, John Jeffery Pugh. In 1922, Pugh’s set up its own service branches, starting in London, Sheffield and Reading. The company was now producing its own frames in malleable iron. Chas H Pugh’s name was on the castings and a new machine of 16-inch width was introduced.

As in all manufacturing, there were inevitably modifications. Some of the 1922 malleable-iron framed Atco Standards had the earlier 1921 Villiers engines. The first trade advert appeared in The Ironmonger on March 11th, 1922, and direct to the public in The Gardeners Chronicle of May 27th. In 1923 a further new size arrived; 30 inches, powered by a four-stroke engine, designed for large areas, and sales were on the increase. 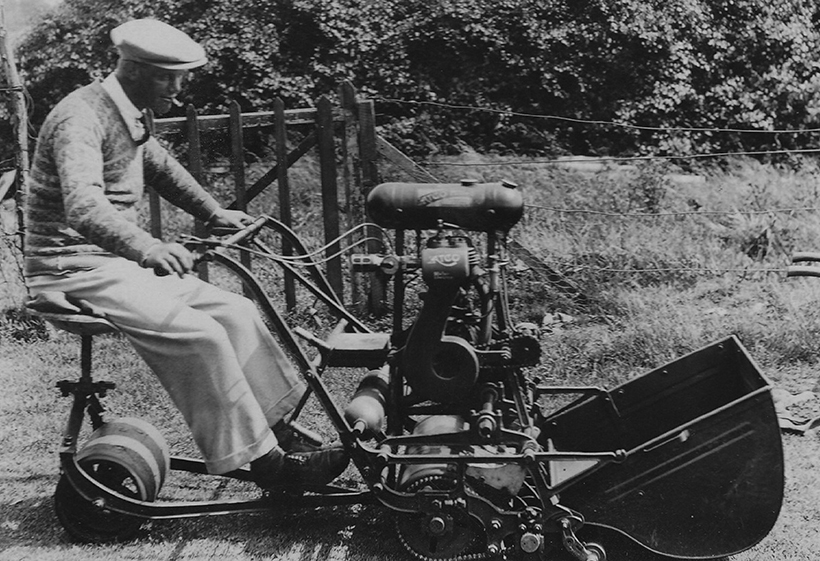 Atco Standard with Villiers two-stoke engine; a 16-inch machine made for the 1926 season.

In 1925, the RHS had Motor Mower trials in Regents Park, London. Atco sent the largest contingent of motor mowers; three 16-inch models, two 22-inch machines and a single 30-inch mower, all of which were highly commended by the judges. Atco’s Service Branches expanded to 10, including Glasgow and Dublin, with 32 sub-branches and 55 representatives.

In 1926, three further models were added to the range – a 14-inch for small lawns, an 18-inch for larger areas and a 24-inch with a four-stroke JAP engine, for large grassed areas. A trailer seat was introduced for the 24- and 30-inch machines. Sales across the range increased to over 10,000 machines but, following the General Strike, the starting price in the range was reduced to 30 Guineas for the 14-inch machine. In 1929 a new deluxe range of the Standard was produced for small gardens. Available in widths of 12 and 14 inches, internally these were known as the HY series. The main notable difference was that they had no cooling fan. They were first shown at the British Industrial Fair. 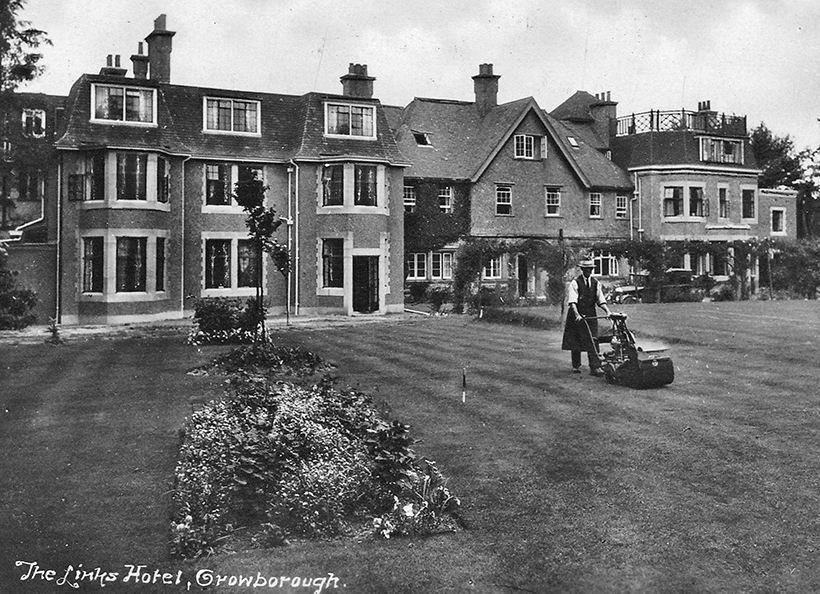 By 1932 all the cast malleable-framed Atco Standards had been modified to the new, all-steel-framed Deluxe Motor Mowers.

As a tribute to this fine branded machine, the Atco Standard is noted for it’s resilience to age, and has become an icon of a vintage age. Also, of course, it was a truly British product. 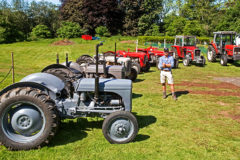 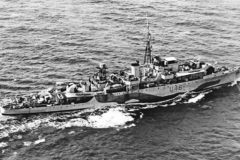