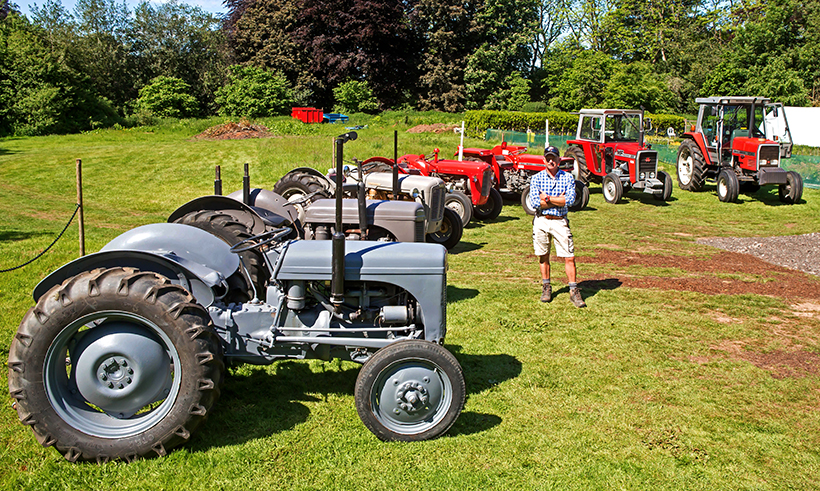 A splendidly varied collection: Michael Addis with his varied array of Ferguson tractors at the nursery.

Michael Addis lives in the heart of North Yorkshire, and has had a passion for all things carrying the Ferguson name for many years. “I used to drive Massey Ferguson tractors on our neighbour’s farm in Ireland when I was a child,” he told me. In recent years, Michael has assembled a collection of Ferguson and Massey Ferguson tractors that represents the development of this famous marque. “Although I won’t ever have every model that they built in my collection, I’ve tried to bring together as many as I can,” he said.

Michael and his wife, Rebecca, run Addis Garden Design and Helperby Nursery, and it’s here that Michael’s collection of tractors can usually be seen, greeting visitors to the nursery during its open days in May and June. “The tractors receive a lot of attention from people,” Michael added, although they’re not seen at rallies. “I don’t take them to shows,” he added, “I don’t really have time, so I just display them at our nursery.”

Working clothes
Michael has bought his tractors in restored condition, but has made sure that they all have that ‘working’ look. “I prefer to see them as if they’re still operational, rather than being too polished up,” he said. The first Massey Ferguson he bought was a 1979 550, which was put to work around the nursery when it first arrived. “That really started my collection off,” he said, “Although I’d never driven one. I went for the 550 because I liked the size of it,” he explained. “It was nice and compact, being used for trailer and grass topping work,” he added. 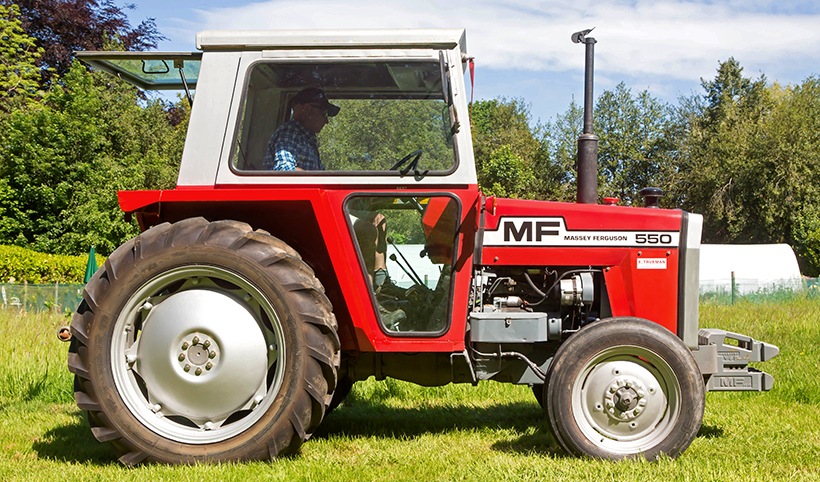 A side view of Michael’s MF 550. He says that it was just the size of tractor that he was looking for and, of course, it had to be a Massey Ferguson!

The 550 is registered DYG 747T, and Michael admits that he searched for two years to find the right one. “It had been supplied by E Truman of Wath, near Ripon, to Mr CA Booth of Hill Farm, Whitwood near Castleford. In time, it passed to PG Smith of Willowbrook, Great Broughton, on the edge of the North Yorkshire Moors National Park.

“The 550 was later bought by Bert and Eddie Heaviside of Great Broughton, who did show the tractor for a few years, and I saw it advertised in January 2015 by Eddie,” Michael recalled. “He was keen to sell it to somebody who would look after it rather than just sell it on. It had been restored at some time, although the inside of the cab remained original, apart from a new seat which I fitted,” Michael added.

Low hours
With only 5,000 hours on the clock, the 550 was in very good condition. “It must have been dry-stored as there’s hardly any rust on the cab,” Michael said. There was still some work to do to it, though. “I searched for 2½ years to find a front weight frame for it, resprayed the wheels and did some other paint jobs.”

Michael admits that of all the tractors in his collection, the 550 is his favourite. “It’s a lovely tractor and I used its original stickers as templates for new ones to be made in Ireland. As a nod to its previous owner, it still carries the name ‘Bert’ at the top of the windscreen.” 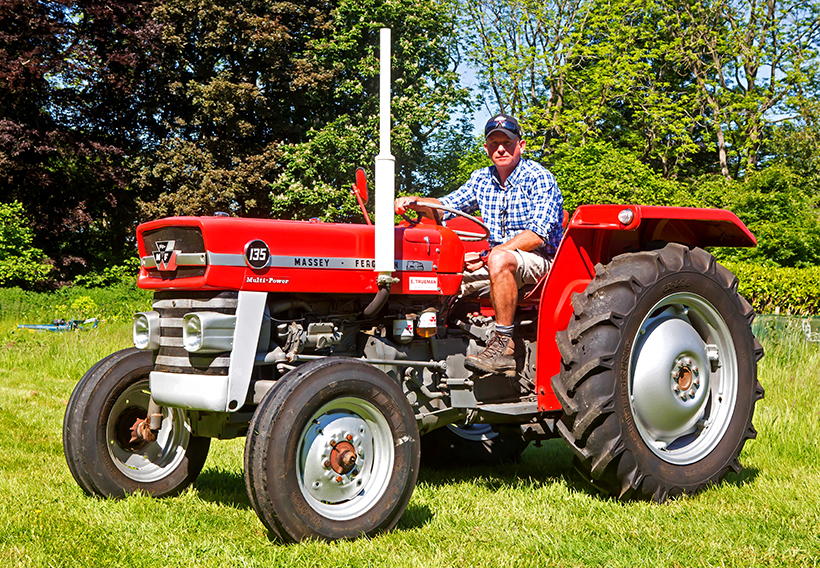 Michael on board his 1970 Massey Ferguson 135. The tractor is in good working condition, although he says that the mudguards and bonnet need to be re-sprayed.

The second Massey Ferguson that Michael bought was GSH 294H, a Selkirk-registered, 1970 MF135. Michael doesn’t know anything about the 135’s previous owners, but saw it advertised on eBay. “This tractor came from Leeds where it had been partly restored by its previous owner,” Michael explained. “I went to see it and bought it there and then. There was still work to be done on it; none of its stockers was present, and I put new front wheel rims and tyres on it.

“In addition, I fitted a mirror, new lights and a front grille, although the latter still requires a new coat of Silver Mist paint. The bonnet and mudguards also need a re-spray, which I’ll tackle over the winter. The 135 is an important part of my collection; I’ve always wanted one ever since driving one as a child on a neighbour’s farm,” he added.

Sewing the seeds
Michael’s interest in tractors stretches back to when he was about four years old. “I’ve always liked them,” he said. “We lived at Moira, County Antrim, in Northern Ireland, and I think that I was about 10 when I first drove a tractor,” he said. “That was an MF178 which was followed by a 595, an MF699 and a 3095. It was pretty demanding work for a young lad. I was doing ploughing on the 3095 as well as general arable work. It was then that I developed my passion for Massey Ferguson tractors.” 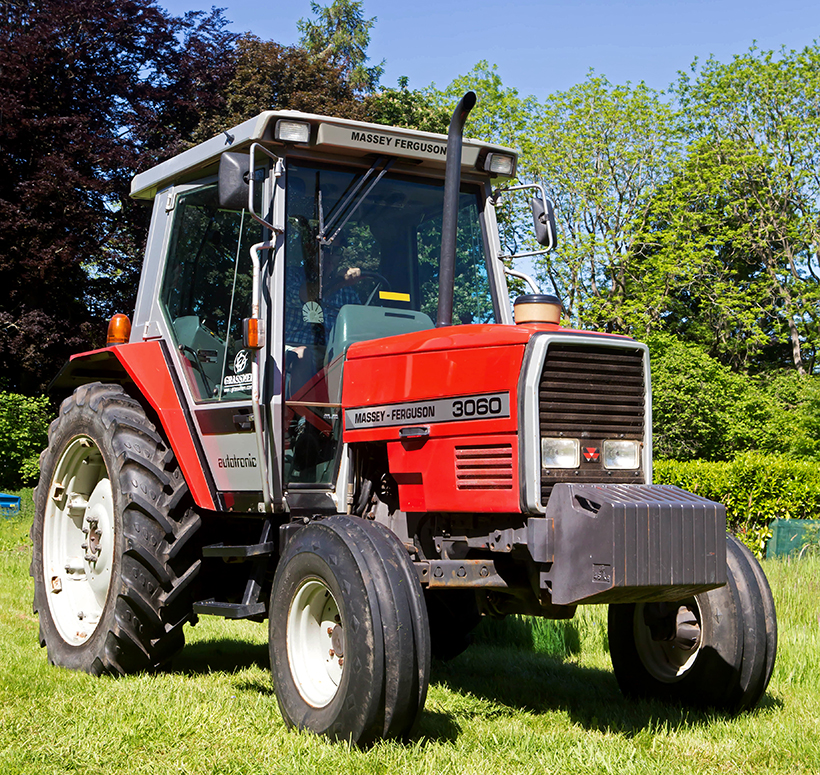 The pretty original MF 3060 looks to be in great shape; it’s easy to forget that it’s about 30 years old!

After leaving school, Michael enrolled at Greenmount Horticultural College in Co Antrim, before moving to England where he studied at Askam Bryan College near York, which is where he met his future wife, Rebecca. Nowadays, Michael runs Addis Garden Design, which specialises in landscaping and garden design services, while Rebecca runs Helperby Nurseries. “My first tractor arrived in 2015, and I had the space to store it – and those that followed – at the nursery,” he said.

The next tractor he bought was UYJ 217, a Plymouth-registered Massey Ferguson 35, built-in 1961. Its working history involved farm work with Charles Ley of Highampton and Vincent Allard of Chilsworthy in Devon, before Michael got it.

This was another machine advertised on eBay and, as it looked pretty good. Michael decided to buy it unseen. “The first time I saw it was when it arrived on the back of a lorry from a dealer in Devon. It was in excellent condition and I haven’t had to do anything to it, apart from a routine service and adding a mirror (also bought on eBay).

“The 35 had obviously been restored to a high standard by its previous owner as the only thing not working was the hour clock,” Michael said. “I think it might also have been fitted with a loader in the past, too. It has a few hydraulic fittings, plus some brackets, which suggest this could have been the case.” 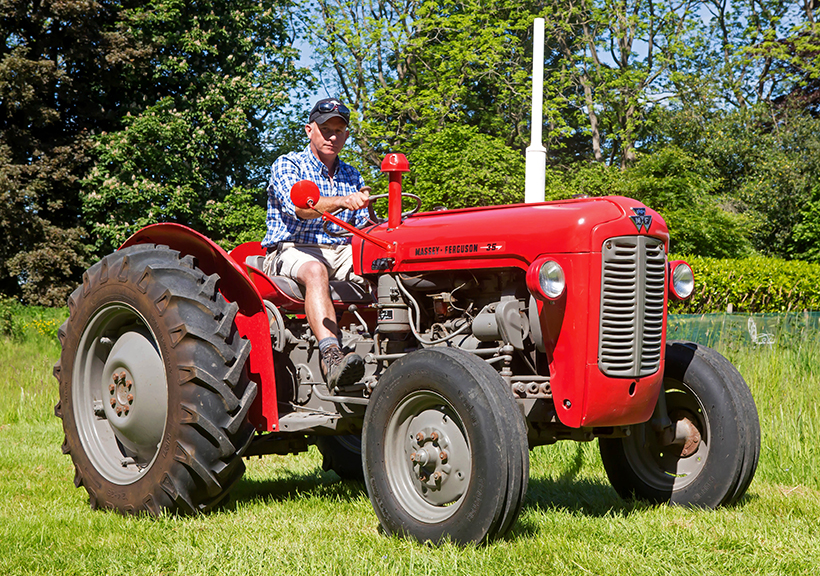 Michael at the controls of his 1961 Massey Ferguson 35. He hasn’t done anything to this tractor, apart from giving it a service and fitting a mirror.

Grey/gold arrives
With three red and grey Massey Fergusons already bought, Michael decided to add a 1958 Ferguson FE35 Grey Gold to his collection. “This tractor came from North Wales in 2018, and was another one that I found on eBay. Ever prepared with his trailer in tow, Michael went to see the FE35, it looked good, he drove it and brought it back. “They always know you are keen if you turn up with a trailer!” Michael added with a wry smile.

“I’ve always liked the look of this model; they look a bit different and provide a link between the grey Fergusons and the red 35s,” he added.

Although the FE35 had been restored before Michael bought it, he was pleased to see that it hadn’t been over-done. “I ran it for a while, but there was a problem with the diesel pump, so I got Nigel Taylor, from Ampleforth, to take it off and send it away for refurbishment. Since then it’s been OK.” Michael is indebted to Nigel, who is a tractor mechanic and has worked with Michael to get the tractors started. “He’s been a great help to me!”

Following the purchase of the FE35, Michael was on the lookout for an even older Ferguson tractor, which turned out to be BSD 748, a 1947 TE-20 petrol/TVO, originally registered in Ayrshire. “I don’t know anything about the early history of this tractor,” Michael said, “but I saw it advertised in Cumbria on eBay.” He was obviously impressed with the TE-20: “I went to see it, I drove it and then I bought it.” This was the first ‘grey Fergie’ that Michael had owned, and he wanted a model that would contrast well with his newer, Massey Fergusons. 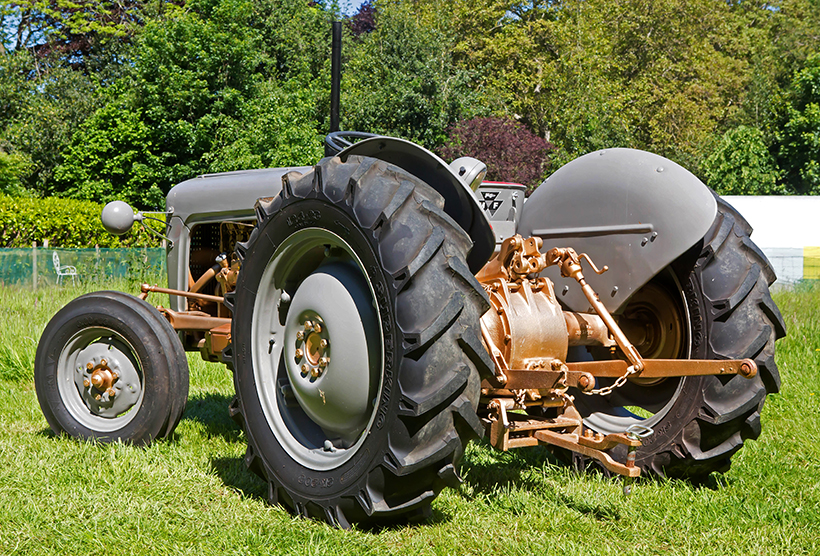 The rear end of Michael’s 1958 Ferguson FE35 grey/gold; all the rear fittings are in a workmanlike condition.

Earliest of the lot
After being brought back to Michael’s North Yorkshire base, the TE-20 did run initially, but then sat for a while before being looked at. “It was clear that some work was required,” Michael explained. “The wiring wasn’t in good condition so I opted for a new loom. In addition, the whole fuel system needed to be flushed and new plus a condenser were fitted,” he confirmed. The Ferguson had been painted during a previous restoration, and Michael liked the ‘lived-in’ look it now presented, so decided to leave this aspect exactly as it was.

Then, to complement the petrol/TVO Ferguson, Michael started looking for a diesel-powered example. “I found a Ferguson TE-A 20 that didn’t have a registration plate or a logbook, and think that it was built around 1951. I found it advertised online, and went to view it in Bedfordshire. It had been used for general, light duties on a smallholding, and was being sold because its owner had died.

“It’s another tractor that’s had very little done to it after I bought it. I got Nigel to clean the fuel pump and then I gave the tractor a general service,” Michael explained. “It was fitted with a roll bar, but that’s been removed so that it’ll now fit under the canopies at the nursery.” Once again, this one’s a tractor that’s in light working condition, just the way that Michael likes it, and he’s more than happy for it to stay like that. 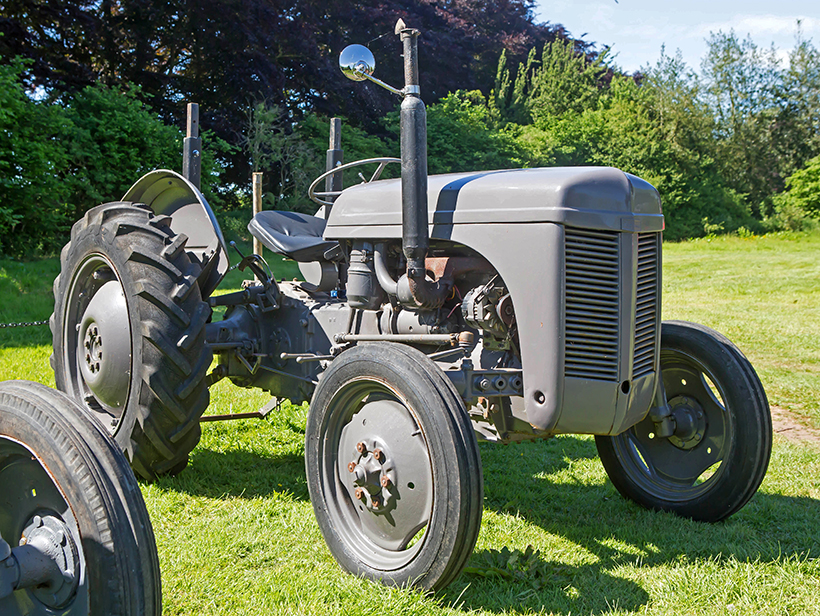 The Ferguson TE-A 20 doesn’t have a registration plate or logbook, so no early history is known. However, Michael thinks that it dates from around 1951.

After buying older Fergusons, Michael turned his attention to a more modern 1992 MF3060 Autotronic, registered K73 NDO. “It was bought in original condition from a friend, locally,” he told me. “I’ve done nothing to it and, so far, it’s been used for baling, spraying and other general, light duties.” Once again, the 3060 has the look of a working tractor, and has carried out jobs around the nursery ever since it arrived. “I’ve used it for trailer work on landscape jobs as well as cutting grass,” Michael added.

Seat search
The biggest problem with the 3060 concerned the acquisition of a passenger seat. “I rang every scrapyard in the UK and Ireland on an almost weekly basis for two-and-a-half years looking for one,” Michael said. But, Michael’s persistence eventually paid off, and it was eBay, once again, that opened the door for him. “I spotted one that was fitted to a tractor at the Yorkshire village of Wilberfoss, so I travelled over, paid the price and was delighted to get it.”

The 3060 isn’t used for work purposes much nowadays; that pole is now undertaken by Michael’s latest acquisition, a 2016 Massey Ferguson 1740. “This is used regularly around the nursery, and is fitted with a rear pallet fork loader and a compact MX C3 front loader.” 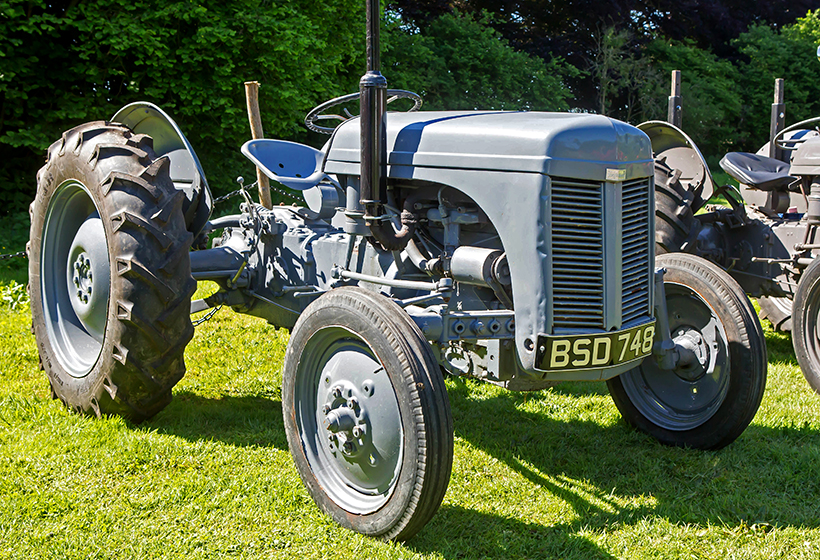 The history of Michael’s 1947 Ferguson TE-20 Petrol/TVO is unknown; it was the first grey Ferguson tractor that he bought, and he found it on eBay.

Despite Michael being pleased with the tractors bearing the Ferguson name that he’s amassed so far, he plans to expand his collection further when he can. “My next step is to look for a 3095. I’d like one of these because it’s the model that I regularly used to drive,” he said. Another tractor on his shopping list is a Massey Ferguson 65 so, one way or another, there are exciting times ahead for Michael and his collection. 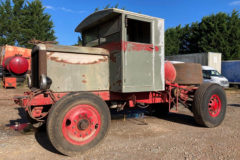 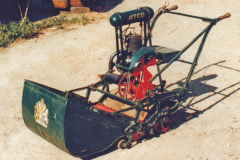