When Raymond Browne went looking for 1946 Ferguson TE-20 parts, he never expected to find another 1946 tractor, as William Carson explains. 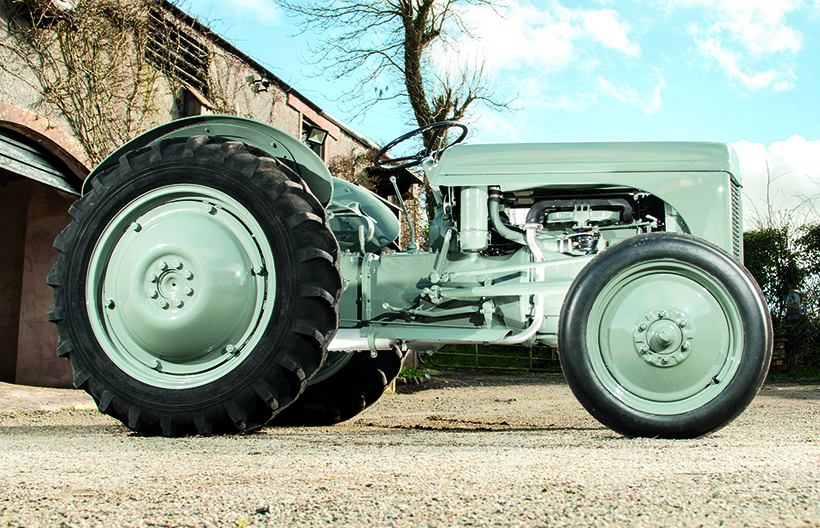 To say that Raymond Browne likes his Fergusons would be an understatement. If it’s old and grey, then he loves it! Over the years he’s amassed a collection of tractors, implements, original spares, new old stock parts, signs, literature and even a genuine Austin A60 Ferguson dealer’s service van. It’s fair to say that he has an eye for the unusual, and he can often be seen at shows displaying his West Riding County Council TE-P 20 with its full industrial mudguard kit, or his ex-military TE-T 20 with its dual wheels and industrial tyres.

If you got to YouTube, and search for ‘Ferguson TE-T 20 pulling out a 14-and-half-tonne Buccaneer jet’, you’ll find a video of Raymond and his tractor working at the Ulster Aviation Society hangers. Nothing, however, catches the collector’s eye quite like a 1946 model! 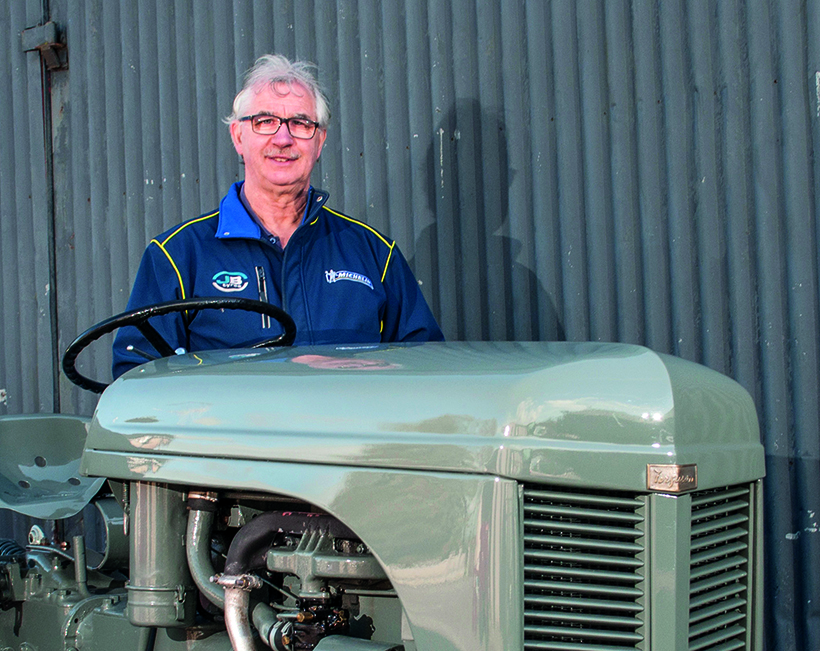 As the nation went into lockdown, Raymond went into his shed and reappeared with this gem.

Harry Ferguson’s ‘handshake agreement’ with Henry Ford was coming to an acrimonious end and with it, production of the Ford-Ferguson at Ford’s Rouge River plant in Michigan. Ferguson had long wished to build his tractor in the UK and, shortly after the end of WW2, found that Sir John Black and his Standard Motor Company had spare manufacturing capacity in Coventry, at its wartime aircraft engine factory in Banner Lane.

That Standard Motors was developing a four-cylinder, two-litre engine for the new Vanguard car was an added benefit, which made this opportunity even more appealing. As Ferguson’s design team set about developing the new tractor, incorporating many of the patents that made the Ford-Ferguson such a success, talks progressed between Ferguson and Sir John Black and, by mid-1946, they’d signed an agreement to develop and manufacture the new tractor together over the next 10 years. 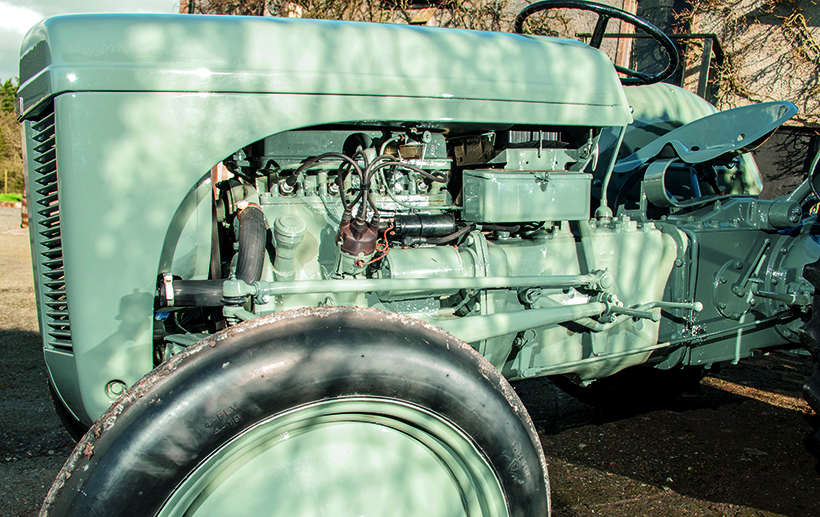 The Continental Z120 engine had an 81mm bore, very similar to the Standard engine in the TEA 20.

Since the launch of the Standard Vanguard wasn’t due until July 1947, the early TE-20 (Tractor England, 20hp) models would have to be powered by an off-the-shelf engine until the Standard engine became available. The Continental Motors Company of Muskegon, Michigan, had been in existence since 1905, building engines for third party applications. Its tried and tested Z120 (120 cu in) engine would provide the TE-20 with a power unit for the first few months of production.

However, due to problems with materials availability in the period immediately after WW2, manufacturing in Britain was beset by supply issues and this, along with the job of fitting-out the Banner Lane facility, slowed early production to the extent that, in 1946, only 315 tractors were built. All this puts the attraction of the early TE-20s into context. 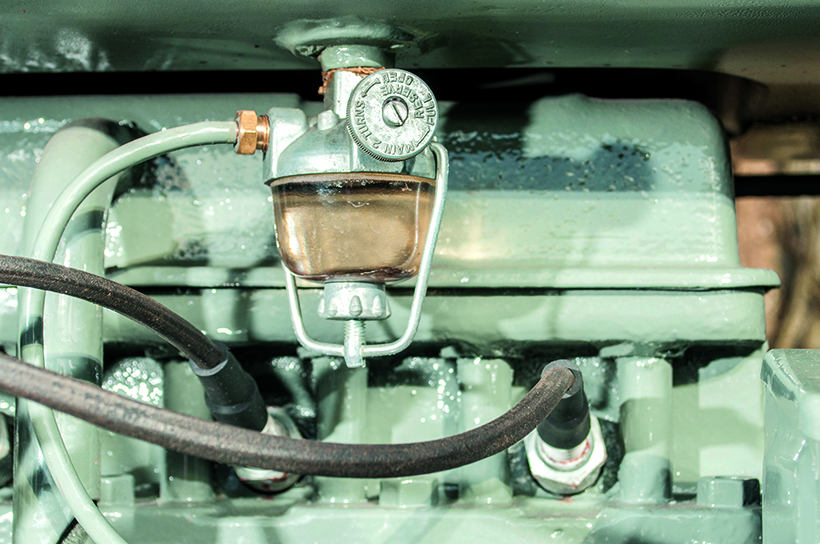 Some new parts were incorporated into the restoration.

A trip to the breaker’s yard
On the rare occasions that Raymond has an afternoon to spare, he might decide to take a trip to a local breaker’s yard, where there’s sure to be a grey Fergie or two. Back in June, 2019, he was with friends in County Cork, when he was offered a TE-20 near Bandon, with the serial number 23; it was a collector’s dream. He bought it, brought it home and it was very much in his mind as he paid a visit to the breaker.

“I was keeping an eye out for Ferguson Continental parts when I came across a tractor which was almost completely overgrown by briars and blackthorn,” he told me. “I worked my way in and, when I saw the long air cleaner and the adjustable stay at the top of the radiator, I knew I was onto something. I bought the tractor and went back to collect it armed with a bow saw and a slasher to clear the hedge from around it! 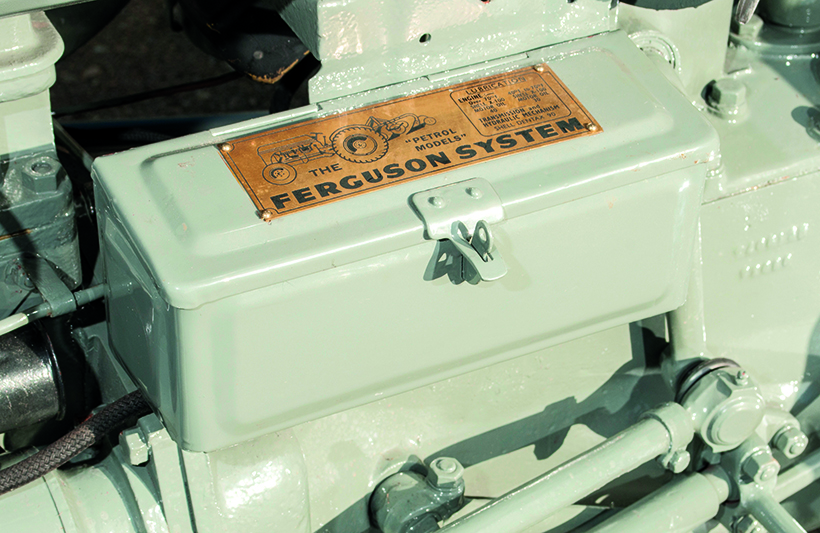 The tool box fits the tractor well and provides a handy place for Raymond’s sandwiches!

“It was lifted onto my trailer with a loader, and I brought it home, but I had no idea of the tractor’s identity until I pressure-washed it and saw the number ‘6’ cast into the top of the bell housing. I investigated a bit more and, sure enough, it had the engine block identification, the correct cast iron gearbox, the year ‘46’ stamped into the dynamo body and the rims with the tyre valves on the inside, which are correct for an early tractor.”

Having lived in the bottom of a hedge for so long, it’s obvious that Raymond’s new find was in poor condition. “I stripped it completely to see what sort of a state it was in. The gear lever had obviously been missing for a while because the gearbox had a lot of water in it. I had to replace four bearings, but I was surprised to see that the selectors were still in good shape. 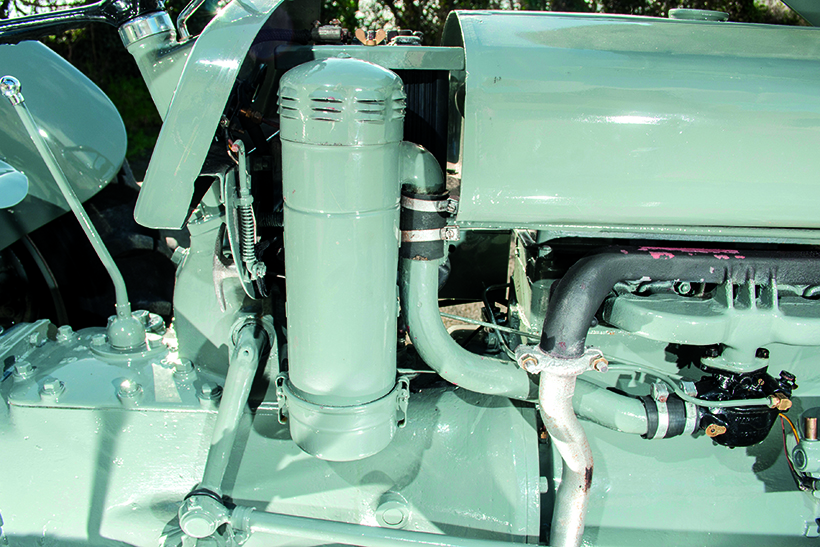 It was the long air filter housing that drew Raymond’s attention to his hedgerow find.

“It didn’t appear that the tractor had been worked into the ground, so I wasn’t surprised to see that the crank, the pistons and the oil pump were still serviceable. The sump was full of gunge, though, and I had to replace the pins in the governor. But, really, I’ve certainly seen a lot worse. I had to replace the seals in the steering box. I lifted it off the top of the gearbox but the bottom cover didn’t come up with it, so there was oil pouring out everywhere. On later tractors, this was redesigned so that the plate was screwed to the steering box. Then I got stuck into the front axle. The pivot pin was replaced, as well as the king pin bushes and bearings. I replaced the wheel hub bearings too. On the early tractors, they’re the same as the Ford-Ferguson part. 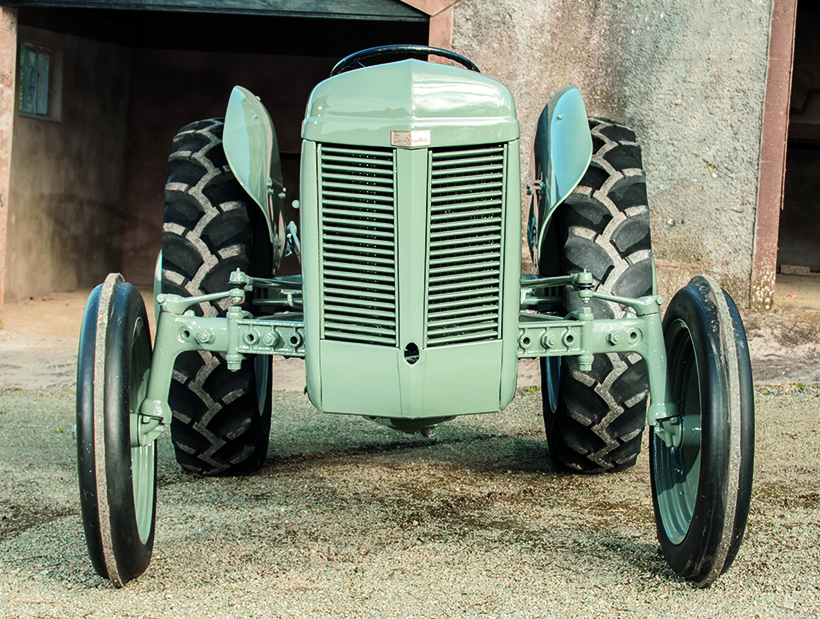 Raymond has set the wheel track to 48in, as it would have been when the tractor left the factory.

“I dropped the hydraulic pump out, checked it over and replaced the control valve. While I was working at the back end, I replaced the cork washer on the quadrant shaft, and the lift cover came off for a look at the cylinder, but everything was in good order so I freed up the Tee piece at the top link and greased it, like it says in the service book. 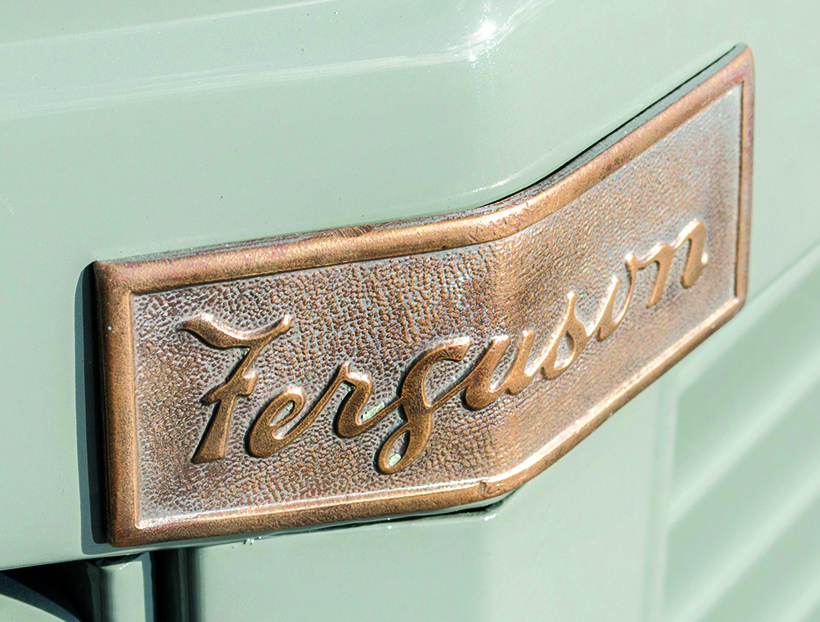 Brass grille badges were fitted to TE 20s during the early period of production.

“I put new seals at the ends of the half shafts and on the PTO shaft. The check chains and shackles were worn so I replaced them with NOS parts that I’d bought years ago. I don’t like using reproduction parts if I don’t have to. The brake drums were worn out of true, but I have a lathe here so I was able to sort that out. 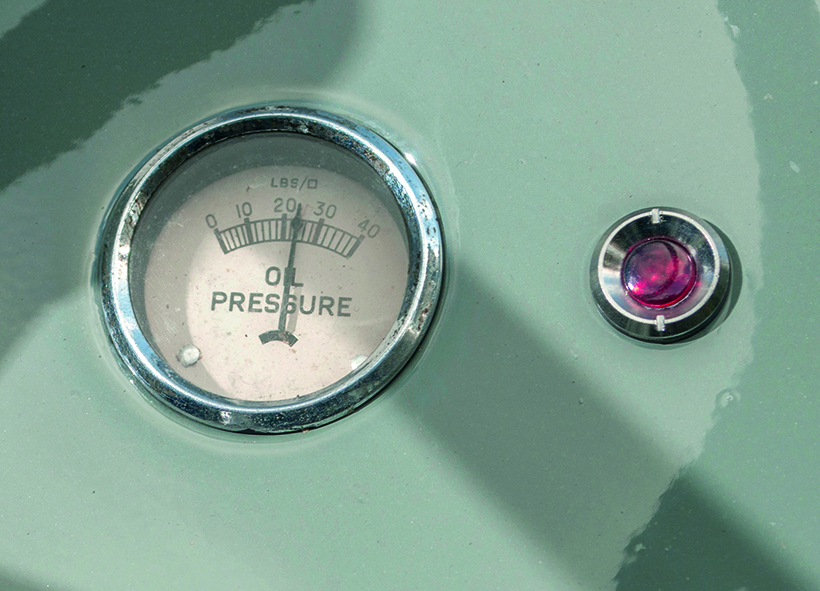 The engine has a healthy oil pressure, as shown on the original, 40psi gauge.

“When it came to the dynamo and the starter motor, I sent them to Sean Corr, in Ardboe, to be reconditioned. I had bought a regulator at Malvern a few years ago, so he checked that over at the same time for me to. Later TE 20s had a 100psi gauge, so I’m pleased to have the original, 40psi oil pressure gauge on this tractor. 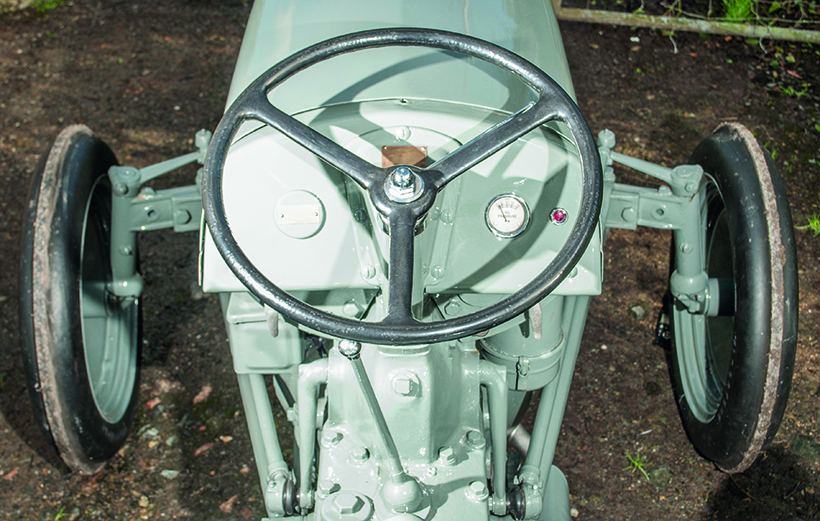 Drivers of the Continental-engined TE-20 enjoy a very uncluttered view.

“Obviously, after lying outside for so long the tinwork was all rotten, but I had most of what I needed in my stock of parts. The grille Tee piece was fabricated by Phil, at Fergie Trailer Shop, and I have to say it was a very good fit, but the rest is original.” When all the mechanical and electrical jobs were done, No 6 received its new coat of paint before those beautifully period correct tyres went on to complete the finishing touches. 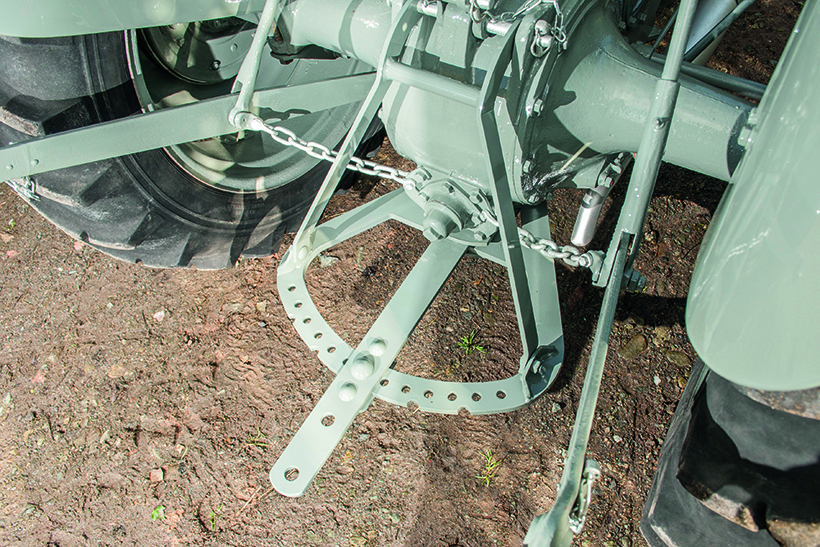 This early-style drawbar is an alternative to the nine-hole version.

There’s a legend in Ireland that tells of a pot of gold that’s to be found at the end of a rainbow. Now, you could go looking for that gold, but you won’t find it because the wee folk are tricky and they’ll hide it where you’ll never look. So, when Raymond thinks about how many times he walked past that hedge in the breaker’s yard before he spotted this gem, he realises just how clever the wee folk can be! 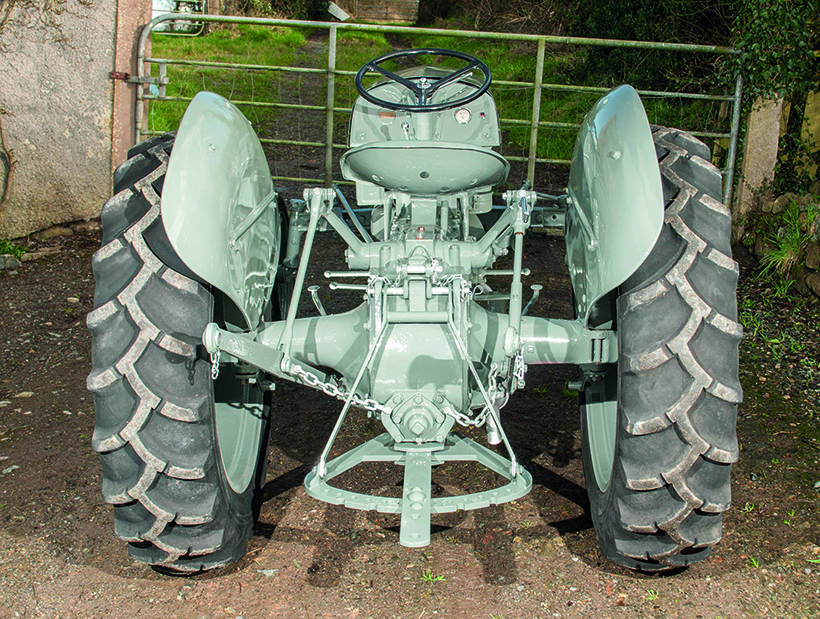 No 1 is in the Ferguson Museum in France, No 2 was presented to Sir John Black. Raymond owns No 6. 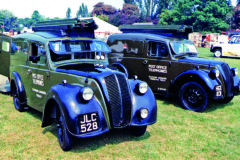 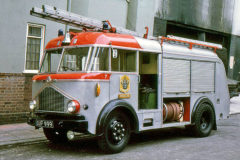