Jim Gault’s 1947 Ferguson TE-20 has led an eventful working life, but now that history has been preserved, as Willie Carson discovers. 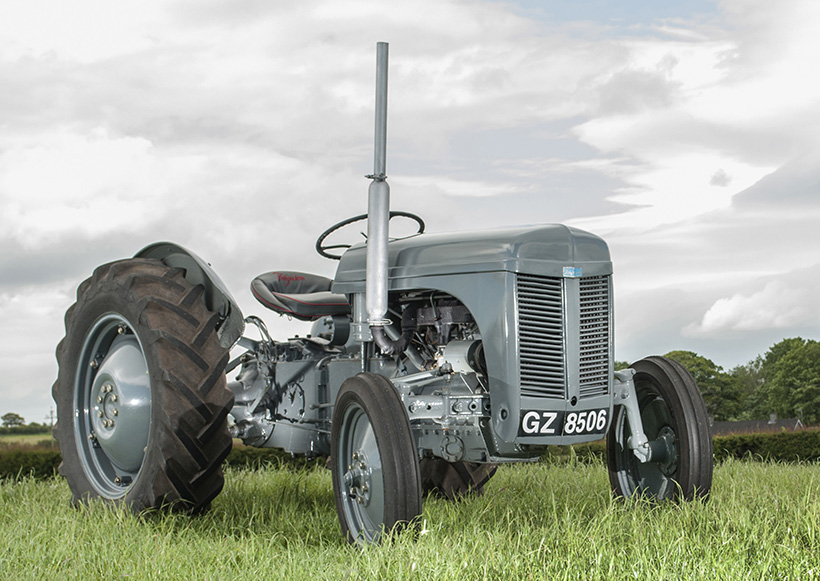 This wee grey Ferguson did all the work in the potato, corn and hay fields. There were no short cuts in the restoration of Jim’s family heirloom.

Jim Gault’s father owned a modest, 15-acre smallholding near Ballymena, in the heart of Co. Antrim, and combined work on the farm with a full-time job at the local Dromona creamery. “My father started off as a ‘milk tipper’, emptying the cans at the weigh bridge, but ended up driving a tanker on milk collection rounds.

“He milked four cows on the wee farm and sold the milk to the creamery. He grew two acres of spuds and planted corn as a break crop. He made enough hay every year on his own ground (and on some ground belonging to the creamery) to keep the livestock fed over the winter. When I was growing up, he had a Ford-Ferguson tractor, then replaced that in 1962 with a 1947 TE-20.” 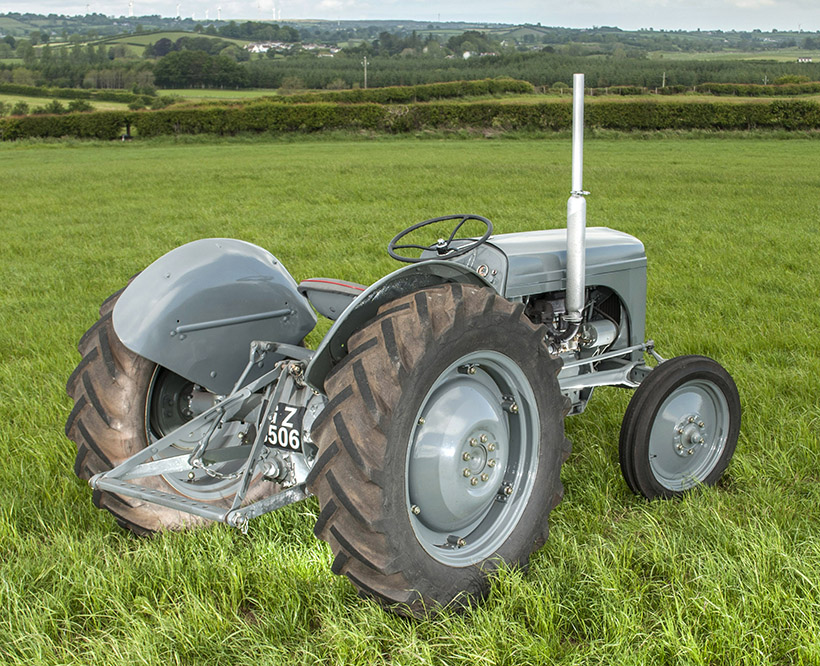 GZ 8506 looks out over the Co. Antrim scenery where it spent much of its working life. The nine-hole drawbar was a very common means of attaching trailed implements.

Eager to work!
“Before I left school, I started working for the neighbouring farmer. I’d come home from school every day, throw the school bag in the corner and head up the lane to work. When I left school, I continued working there for a couple of years before I took a job at Coleman’s mill, driving a lorry.

“When you were sent to Belfast docks to load 15 tons of feed in 16-stone (102kg) bags, your legs were shorter in the evening than they were in the morning! After that, I drove a digger for Shaw Bros., then I worked a mobile concrete pump for Ulster Concrete Services. When that business closed, my brother Jackie and I bought a pump each and we ran our own business for the next 19 years, until both the pumps and we were done! From then until I reached retirement age, I worked as a delivery driver.” 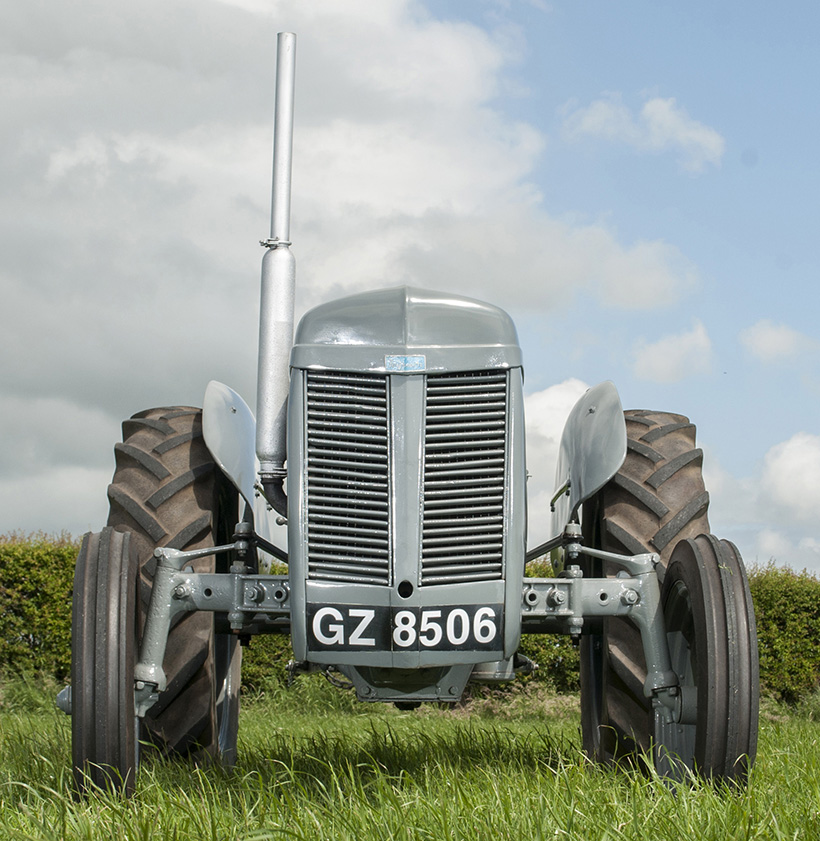 This was the pinnacle of 1940s tractor design, simple but very effective.

As Jim adapted to each change of employment, he developed new skills and learned how best to deal with problems as they arose. So, it’s no surprise that, when he reached retirement, he turned his attention to a hobby which encompassed his early farming background and his wealth of practical experience.

“I bought a 1960 Fordson Dexta,” he told me, “just to give me something to do. The engine was seized, the tinwork was rough and it had been left out in a field for years, so the cattle had chewed all the wiring. It wasn’t in great shape.” Nevertheless, Jim completed the mechanical aspects of the restoration and then resprayed it. When he’d returned the Dexta to its former glory, he decided it was time to turn his attention to his father’s TE-20. 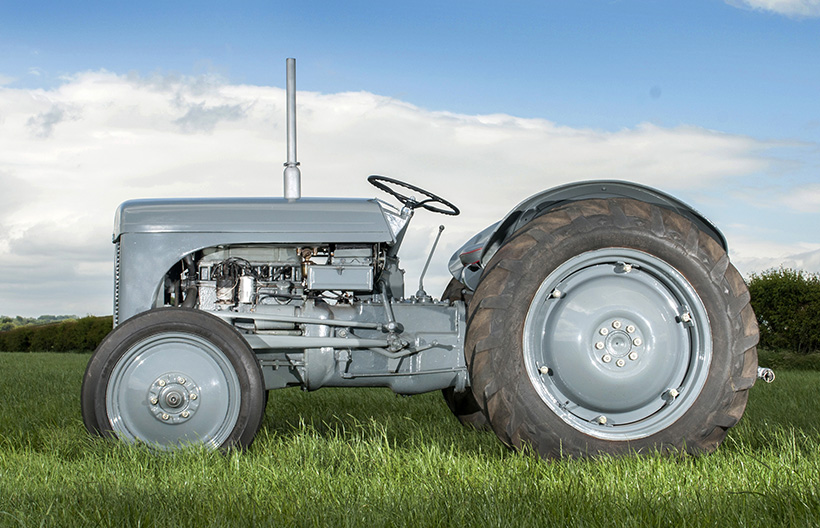 Don’t you just love those solid wheel centres. Jim’s father transported the milk from his four cows to the creamery with the TE-20.

A revolutionary model
Harry Ferguson began production of his revolutionary wee grey tractor in July 1946. Having leased the Banner Lane factory from Sir John Black, chairman of the Standard Motor Company, it was natural that, when looking for an engine to power the TE-20, Ferguson should approach his landlord to see what was available. Still in the design stage, the Standard Vanguard was to be powered by a four-cylinder, overhead-valve engine with bore and stroke of 85mm and 92mm respectively, giving a swept volume of 2,088cc. This was adapted for use in the tractor by reducing the bore to 80mm, which resulted in a capacity of 1,850cc. 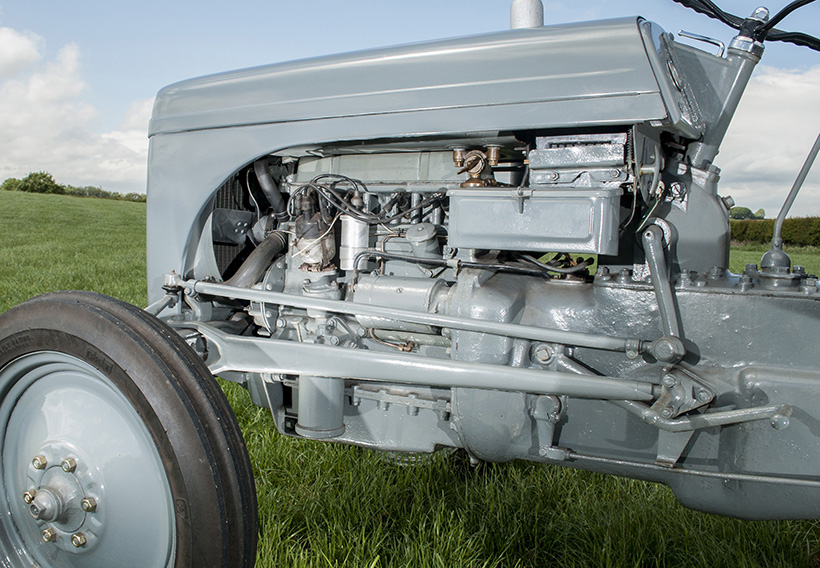 By the time Jim’s father bought this TE-20, it had had one engine change and a fuel conversion. The vertical oil filter marks this out as an early TE-A engine.

However, this engine wasn’t available immediately so, as a temporary measure, Ferguson fitted the Continental Motors’ Z120 petrol engine, from Michigan. By 1947, the Standard engine was in production and adapted to fit the tractor with a cast aluminium sump acting as a load-bearing component of the unitary construction.

This variant was called the TE-A 20, and Harry Ferguson was convinced that petrol was the ideal fuel to power his tractors. But, when the government abolished tax relief on ‘red’ agricultural petrol, cost-conscious farmers were soon asking for a TVO (Tractor Vaporising Oil) version. Until the ever-stubborn Ferguson relented and released the TE-D 20 in July 1949, many after-market conversion kits were available. 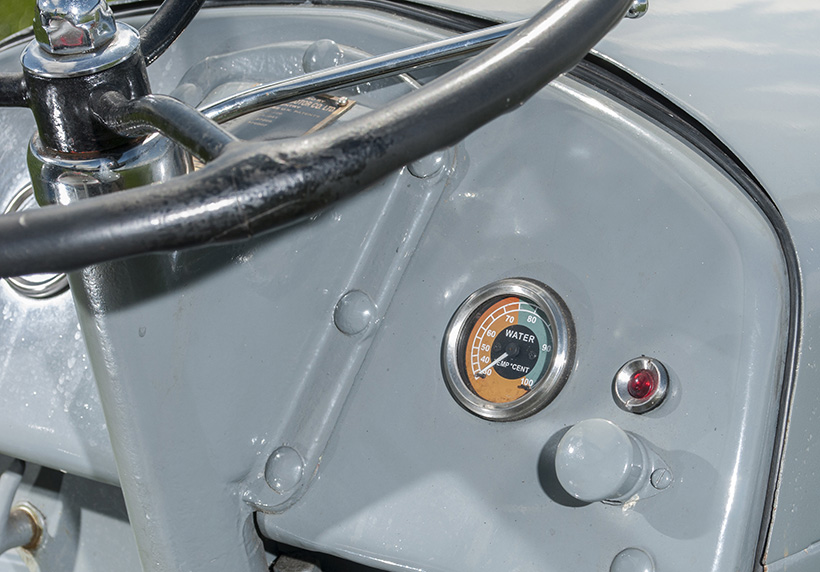 A water temp gauge was necessary on TVO tractors to show when the engine was warm enough to switch over to TVO.

GZ 8506 left Banner Lane in 1947, with chassis number TE 5037 indicating that it was initially fitted with an American engine. Prior to its arrival on the Gault family smallholding, it had been converted, firstly by replacing the Continental Z120 with a Standard Motor Company engine, and then by the addition of a TVO conversion kit. Jim explains the early stages of the restoration as follows. “It had been sitting in a shed for over 10 years, so I poured in a gallon of petrol, cleaned the plugs, fitted new points, swung the starting handle and away she went!”

Engine weakness
One of the short-comings of the American engine was its pressed-steel sump, which offered no structural strength to the TE-20 skid unit, so two ¾in steel tension bars were fitted between the bell housing and the front axle support bracket. Jim found evidence of this arrangement as he began the restoration. “Whoever had fitted the Standard TE-A 20 engine had just cut through the two steel rods and left the ends bolted to the TE-20 front axle bracket. But I changed that arrangement for the correct, TE-A bracket, which looks neater with this engine.” 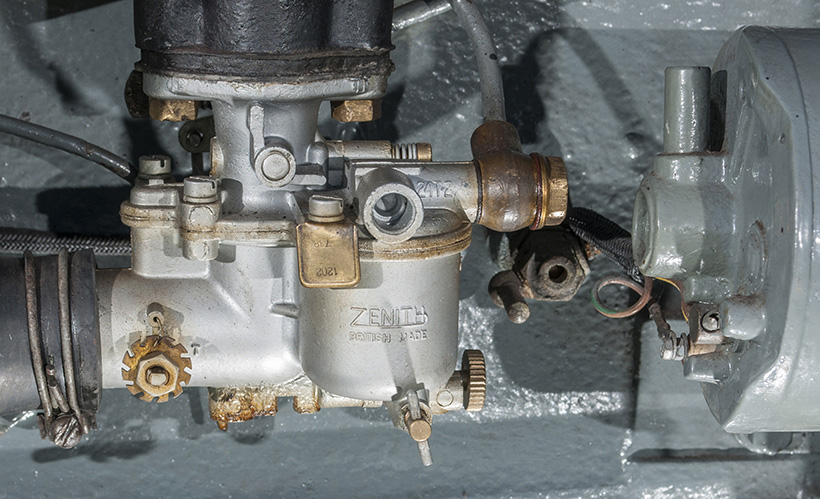 The Ferguson was given new parts where necessary during the engine rebuild, which included bearings and seals, new rings, a new oil pump and a replacement core for the radiator. There were new seals fitted in the gearbox, on the half-shafts and to the PTO shaft. There was an annoying oil leak around the timing cover which Jim traced to the governor shaft seal; fortunately, a simple enough problem to fix. The brakes were given a proper service, which included riveting new linings onto the old shoes.

Jim is pleased with the efficiency of the vaporising manifold which was part of TVO conversion kit. In his opinion, it’s a better set-up than the later, Ferguson heat shield, but the Zenith 24T carburettor was freezing the petrol, so he purchased a replacement. Since then there have been no further problems in this regard. 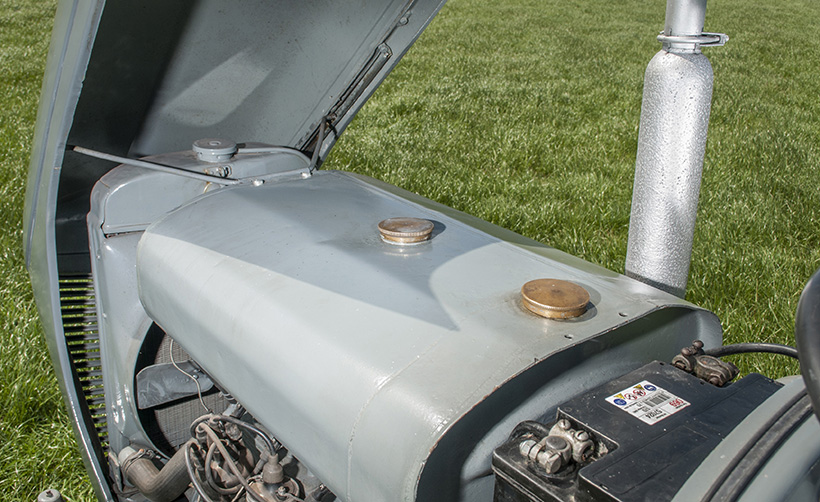 The two-section fuel tank has a separate internal portion which holds a gallon of petrol that’s reserved for engine starting.

Dilution risk
When converting an 80mm bore engine to run on TVO, it must be noted that the less volatile fuel leaves a residue on the bore wall which is ‘scraped’ down into the sump, diluting the engine oil. This problem was caused by giving the engine insufficient time to reach the ideal temperature before the fuel tap was switched from petrol to TVO. It should be noted that the TE-D 20 had an extra ring on the pistons to scrape the unburned fuel back up into the combustion chamber.

“When I had the tractor going, the arms went up and down properly,” Jim recalled, “but, when I hooked on the plough it wouldn’t lift at all, so I took it to John Fleming, a very knowledgeable Ferguson enthusiast. He discovered that the relief valve was seized, so he took the hydraulic top cover off, stripped the mechanism, cleaned it, rebuilt it and set the spring tension properly. 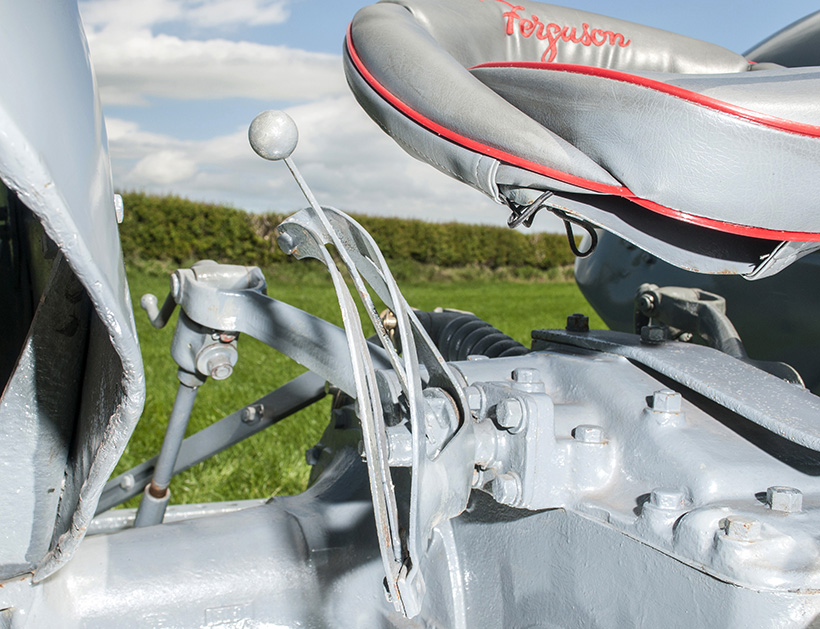 This is the lever that was to change world agriculture for ever.

“For some unknown reason, there was a later-style, scalloped rim fitted on one side of the front axle. I went to Bertie Dunlop to look for a replacement, full-dish rim and it turned out that he had a tractor with odd rims and was needing the one I wanted rid of, so we did a swap and I fitted two new front tyres at the same time. I did whatever repairs were needed to the tinwork and then painted the whole thing.”

The tractor was originally assembled with a six-volt electrical system, but Jim has upgraded it to a 12-volt set-up, fitting a new coil and condenser and upgrading the voltage regulator. With the original starter motor now receiving more encouragement, the engine bursts into life much more readily. 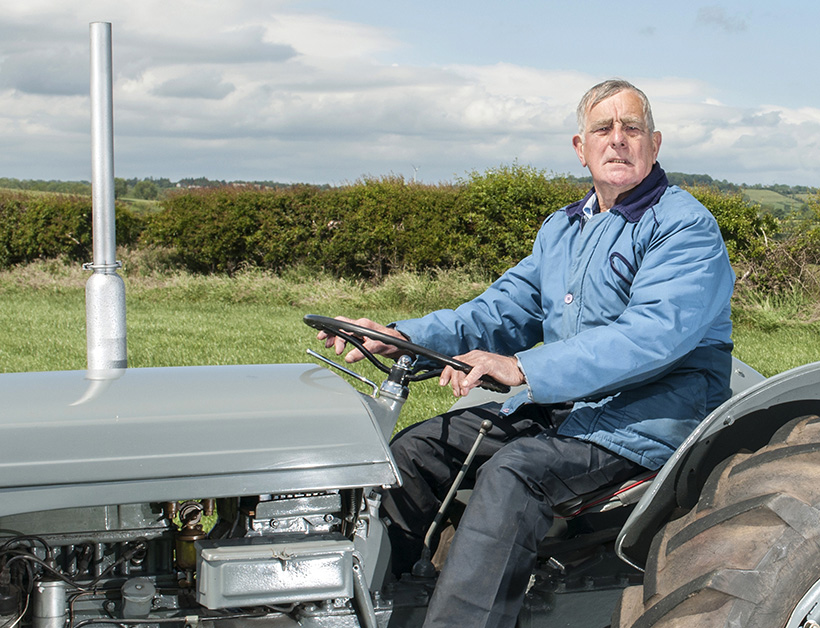 Jim Gault is justifiably proud of this superb restoration.

Jim takes his tractor to local vintage shows, working days and on road runs. It may have strayed from Harry Ferguson’s original specification for the perfect tractor but, thanks to Jim’s diligent efforts, it remains as a historical record of the early TE- 20 progress. 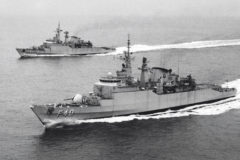 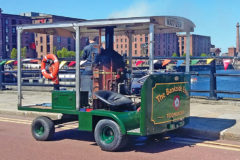