Mike Neale reports on a 1952 Fordson Thames E494C 5cwt van that was bought by Neil Bannister at the second attempt, then uniquely restored. 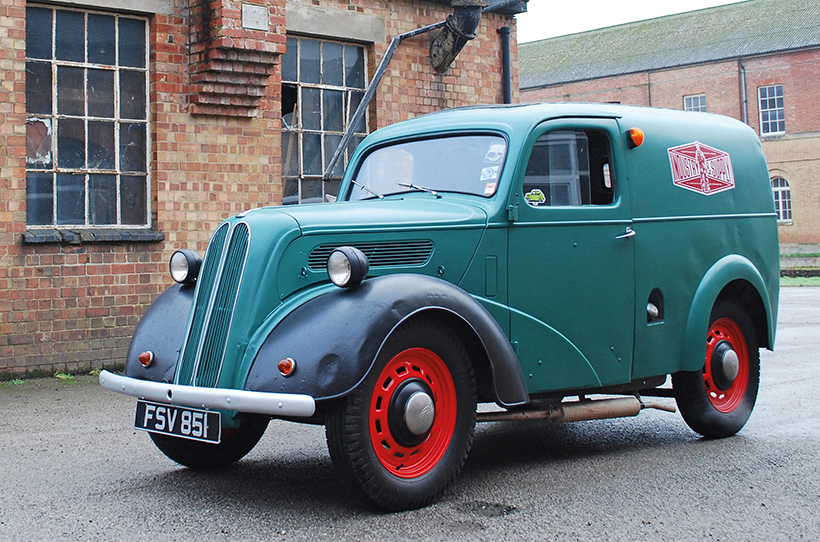 Front bumpers were an optional extra. The present registration, though appropriate, is an age-related mark issued at some time; the history of this particular van is almost totally unknown.

Front bumpers were an optional extra. The present registration, though appropriate, is an age-related mark issued at some time; the history of this particular van is almost totally unknown.Ford’s 7Y 5cwt van was launched in October 1937, at London’s Royal Albert Hall, replacing the Model Y van. Unlike the outgoing model, ‘Easy Clean’ disc wheels (no spokes), 10in diameter Girling wedge-action brakes and front-hinged doors were fitted. The grille had a single nacelle with vertical bars and the headlights featured somewhat bulbous lenses.

The steel body had double rear doors, a fabric-clad timber roof panel and a wooden floor.  The spare wheel was usually – but not always – mounted on the nearside door (the left-hand door on RHD vans, and the right-hand door on LHD vans).  The bonnet opened on either side. 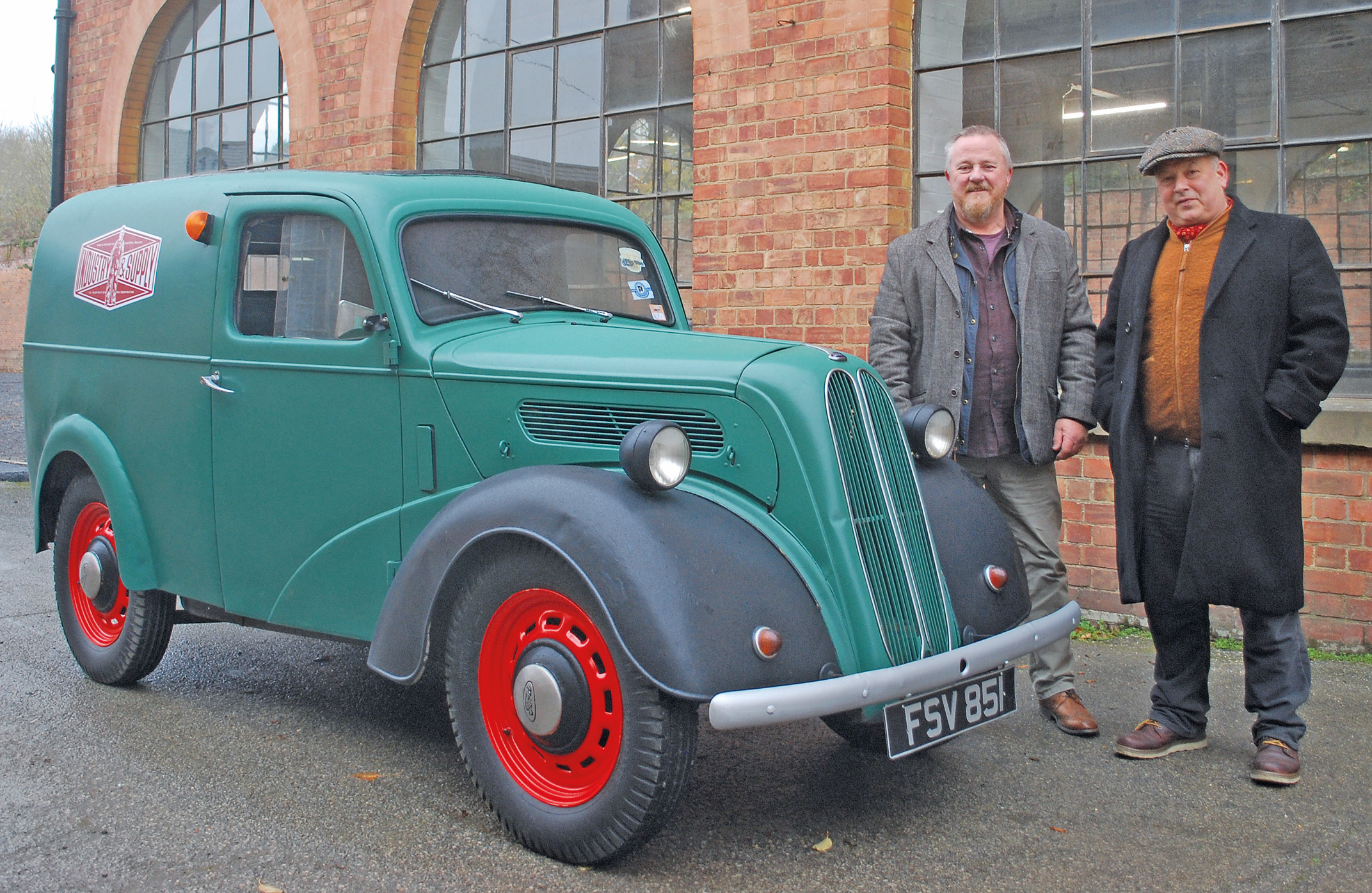 Vacuum wipers were fitted to the scuttle below the (usually) non-opening windscreen, although an opening type was an option, in which case the wiper(s) were mounted above.  The fuel tank and filler were at the rear and a single, central rear lamp was fitted, but no reflectors.  A pistol-grip handbrake freed up the floor space so the driver could exit the van from either side.

The 933cc, 8hp sidevalve four-cylinder engine was mated to a three-speed gearbox with synchromesh between the upper two ratios.  Transverse spring suspension was used, similar to its predecessors.  The wheelbase was 7ft 6in, length 11ft 5in, width 4ft 7¼in and height 5ft 6in.  The load area was stated as 65cu.ft, which included the space next to the driver, as no passenger seat was fitted as standard.  It was 55cu.ft with a passenger seat. 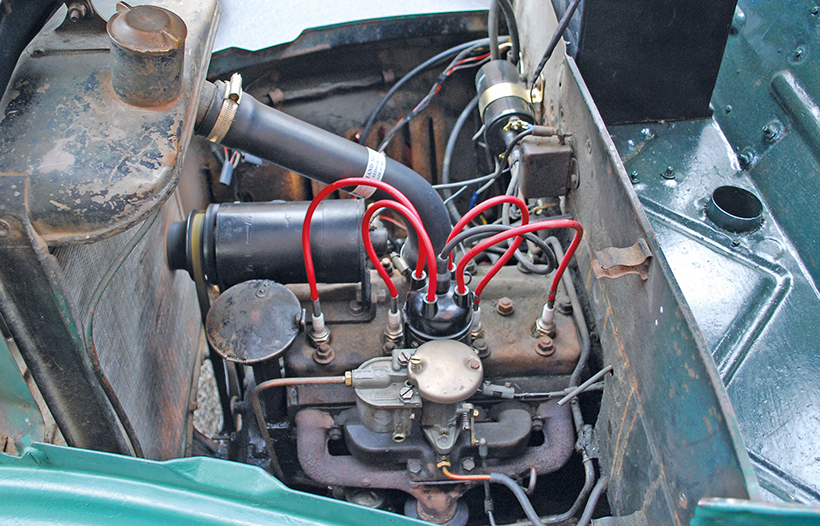 The 933cc 8hp sidevalve engine is believed to be original, though this is not 100% certain.

For 1940, a timing chain was fitted to the engine instead of fibre timing wheels and 8in Girling brakes were provided.  Production was paused in 1941 but recommenced in 1946, by which time it had been redesignated E04C, with smaller headlamps with flatter lenses and a side mounted fuel filler.  Brakes also reverted to 10in Girling.

In October 1948 a redesigned grille with a central divide arrived, as on the E494A Anglia saloon, the van becoming the E494C.  The wings gained a ribbed edge.  It then remained largely unchanged until being discontinued in 1954, although some wore a Thames badge rather than Fordson.  A 10hp 1172cc engine was offered on export models, as was an optional chrome front bumper which was sometimes even fitted with overriders!  Such luxury.  It was replaced by the all-new Thames 300E in July 1954. 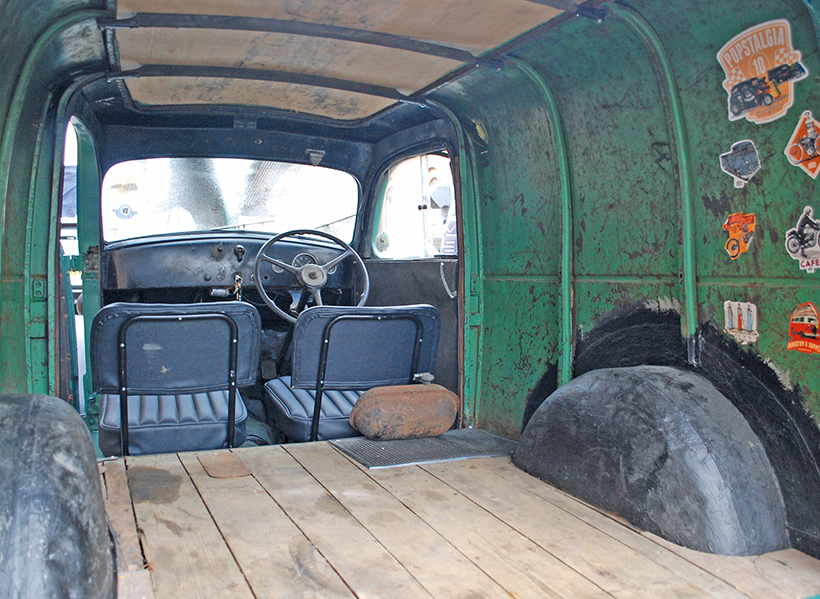 The working garage van look has been carried through to the loadspace.

Neil’s van
The 1952 Fordson Thames E494C that you see here is owned by Neil Bannister.  Neil already owned a Ford Popular 103E saloon but was looking for a van to promote his automotive art business, Industry and Supply.  The van was a barn-find in Scotland, up for sale on eBay in 2018.  However, Neil was pipped to the post by a chap in Essex who bought it.  However, he already had a Ford Pop resto project to undertake and decided to put it up for sale again just three weeks later.  This time Neil was able to step in and buy it.

“I didn’t realise how much work was needed until I got it though,” Neil notes.  “It did run, however, and just about stopped – eventually.  Now the brakes are about as good as they can be.”

The van had clearly been left outside for some time and the engine didn’t appear to have been touched in decades.  “It looked like it had 1950s spark plugs in it,” recalls Neil.

Neil took it to the NEC Classic Motor Show in November 2018, as found, before any work had been done. At this point there were no rear doors with the van. 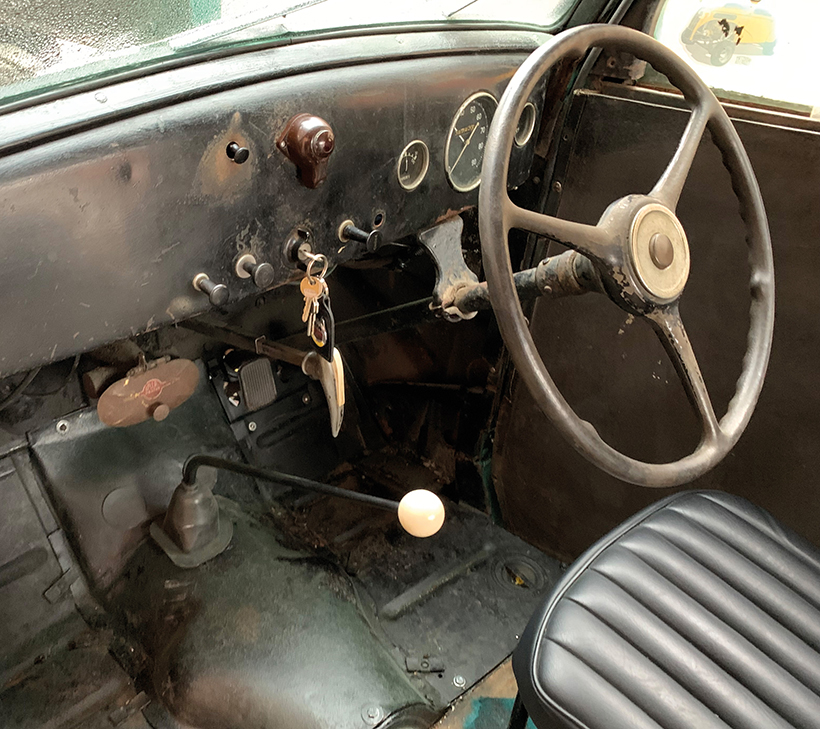 The cab, too, is typical Ford and typical ‘working van’ of the era. Sound-deadening would only get in the way!

He then approached Colin Pudge, the Coventry and Midlands organiser of the Ford Sidevalve Owners Club.  Colin has a decorating business, but also restores cars as a hobby.  He agreed to carry out the work needed to put the van back on the road, with help from fellow classic car and sidevalve Ford enthusiasts, Andrew Bailey and Mick Hartley, collectively known as BHP Classics.  The three of them often club together to buy and restore cars.  Between them, they own a Ford Popular 103E, E494A Anglia, Ford Squire 100E, Mk2 Zodiac, 1959 Mini, Mini Cooper, Minor Traveller and a Mk2 Jaguar.

Neil didn’t want the van fully restored, but for it to be mechanically 100%.  “I saw it more as preservation than restoration,” Neil tells me.  “The whole centre had come out of the universal joint on the rear axle and it had worn so much that it was amazing it moved at all.”  Fortunately, Colin had a decent secondhand one he was able to use.  New kingpins, shackle bushes, wheel bearings, brakes, brake cables and tyres were fitted. 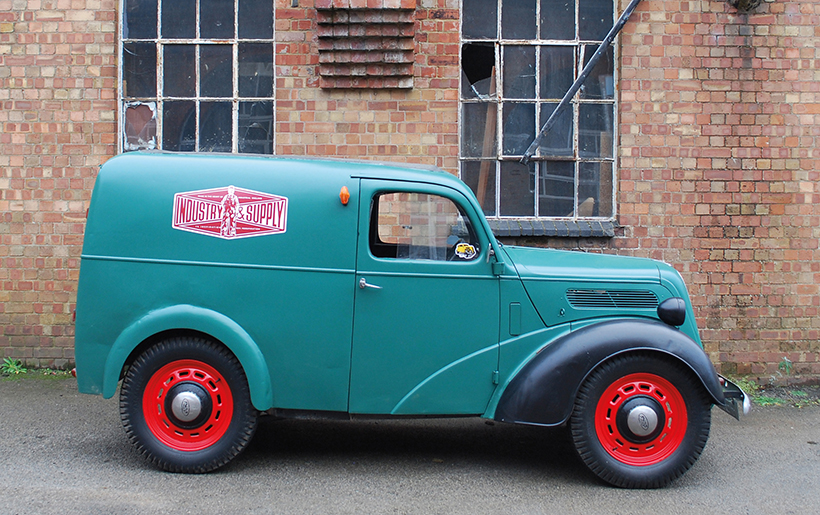 The wheels were replaced with a set that Neil had bought about 30 years ago for a Ford Pop that he had then.  “The tyres are Town & Country ones,” explains Neil.  “They are actually WW2-style Jeep tyres, intended for a slightly wider rim.  They are 2in taller than normal for the 17in wheels, which makes it slightly over-geared, but the speedo reads just right throughout the range with them on, having checked it digitally, so it must have been well out before.”

Colin and his team went through the electrics, making good some previous repairs, and added wiring for indicators and brake lights.  They also got the vacuum operated wipers to work better.

The 933cc engine and gearbox are as found, which Neil thinks are original.  A new coil, plugs, leads, reconditioned distributor, dynamo, starter motor and a new carburettor and exhaust were fitted. 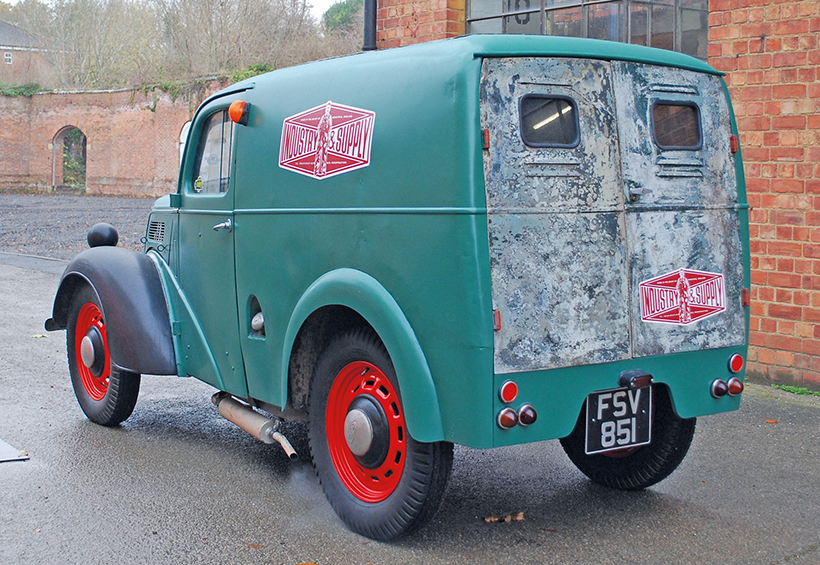 I was trying to work out why the exhaust pipe looked so prominent.  It is quite clean and silver coloured, not having been used much yet, and of course the vans don’t have sills fitted below the doors, unlike the Anglia E494A cars.  Then I realised that usually the exhaust is largely hidden by the spare wheel mounted on the passenger door, which this van doesn’t have.  “Mind you, from inside you might as well not have an exhaust, as it’s that loud,” jokes Neil.

Attention then turned to the body.  “The bottom halves of the front wings had completely rotted, so new sections had to be welded in,” recalls Colin.  “The nearside rear arch had been made of oil cans and bits of a 103E Popular saloon wing, with lots of filler.  The rear valance was made from an old can.”

A new rear wing was fitted on the nearside, the two bottom rear corners replaced, and a new rear valance fitted.  Patch repairs were carried out to the offside rear wing. 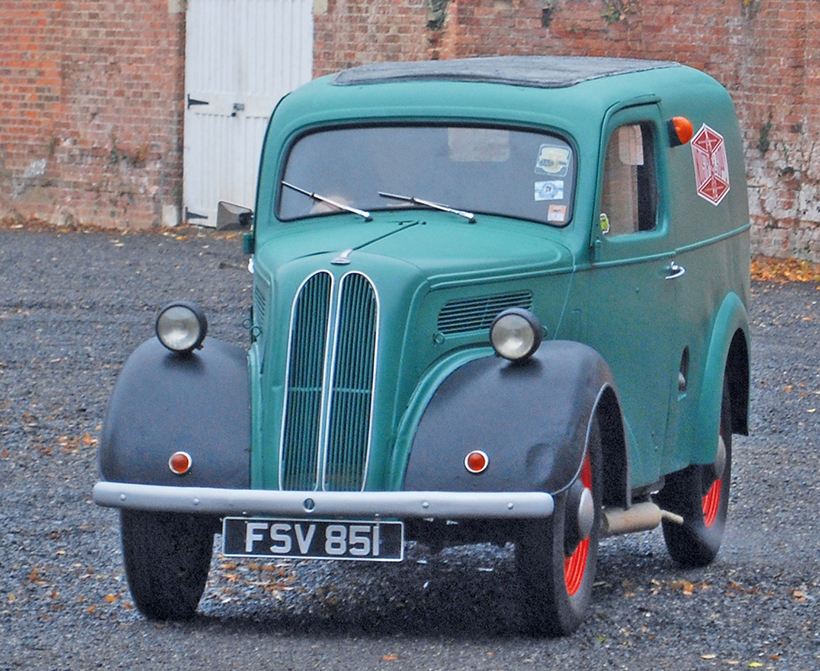 Then there was the small matter of the missing rear doors.  Neil managed to track down six pairs in varying degrees of decay and picked out the best two.  “The pair on the van at least match, and I like their patina, so they won’t be painted,” notes Neil.  “Originally there would have been a wooden frame all around the rear door aperture, but someone had replaced this with an angle iron frame.  Colin had to adjust the back end to make the aperture fit the doors.”

The van was then painted with a 4in roller and brush using oil-based satin paint.  “I wanted it to look like it has been painted in surplus War Department paint by a back street mechanic in the 1960s, who has owned the van for years and done running repairs to keep it going.  He’s perhaps just given it a Saturday afternoon flash over to smarten it up, ready for work on Monday,” Neil explains.

The seats were given to Neil and Colin when they were at Santa Pod by someone who didn’t need them.  “They were very tatty and disintegrated completely when we took them out of the bag, with the contents blowing everywhere in the wind in front of thousands of people,” recalls Neil.  The remains of the covers were used as a pattern to re-trim the seats.  There are still a few jobs to finish, such as adding door straps and trim. 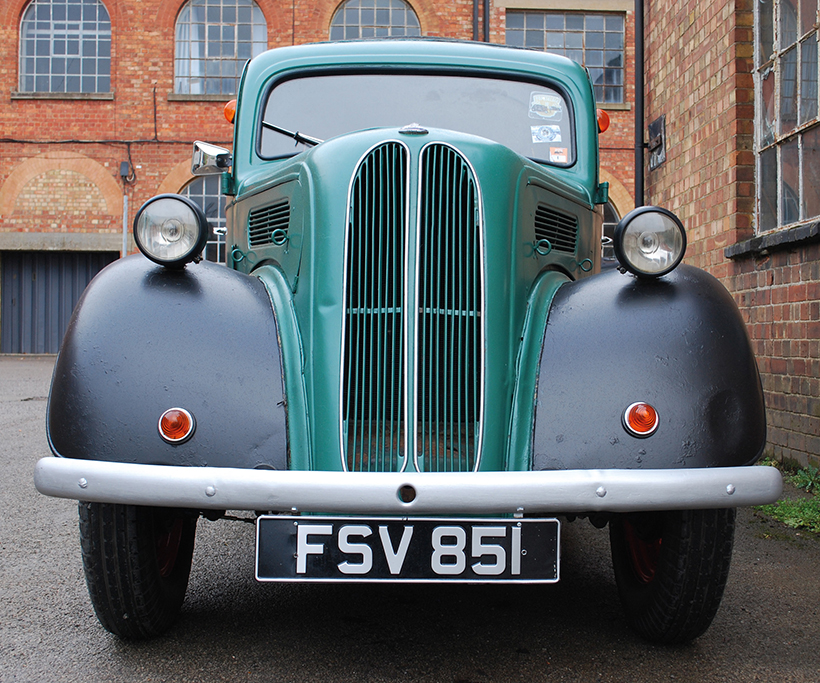 After painting, the van was displayed at the NEC Classic Motor Show in November 2021, where it got a lot of attention, including from your CVC team.  Just as I arrived, so did the current Editor Peter and former Editor Nick Larkin, who pronounced it one of his top five vehicles of the show.

Now, Neil plans to park the van in their showroom during the week and take it out to car shows at weekends.  Some of these might not even involve travelling, as the Industry and Supply showroom (industryandsupply.com) is located in a Grade II Listed 19th Century former Military Ordnance Depot in Weedon, Northants, where another business, Car Natter (carnatter.com) plans to organise two or three car meets every month.  Other automotive businesses are also moving in as the buildings are restored.  The aim seems to be to make it a bit like Bicester Heritage. 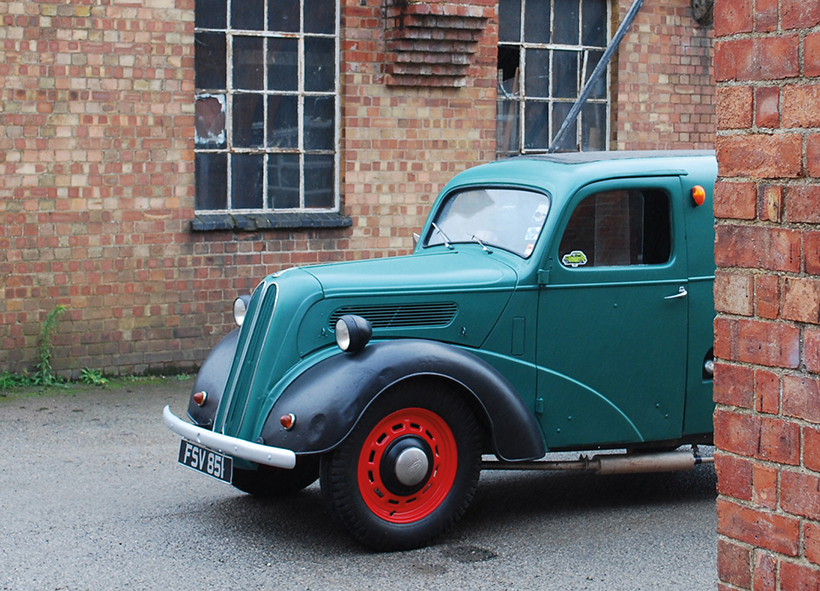 With thanks to Neil Bannister and Colin Pudge for their assistance with this article, including the photo shoot in the drizzle.

This features comes from the latest issue of Classic & Vintage Commercials, and you can get a brilliant, money-saving subscription to the magazine simply by clicking HERE 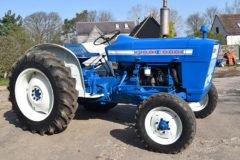 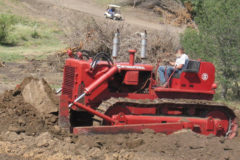