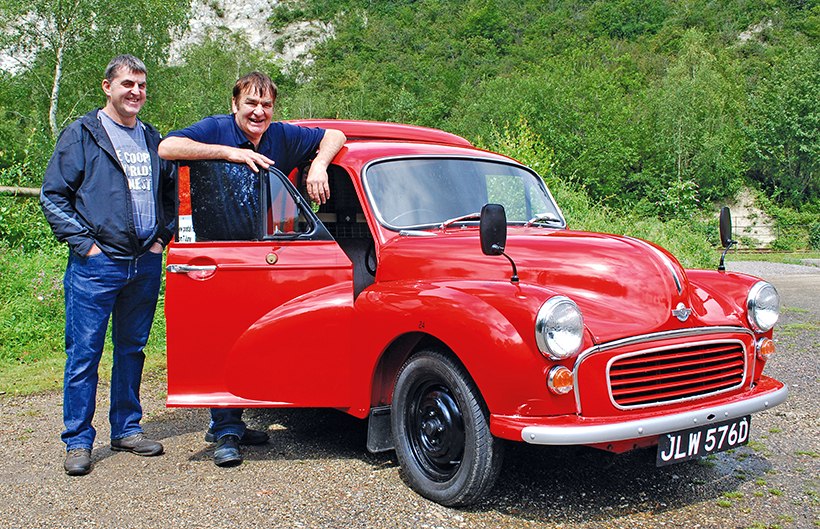 For several decades, the General Post Office’s preferred vehicle manufacturer of light and medium vehicles was Morris.  Probably the most archetypal post-war mailvan is the Morris 50 cu. ft. quarter-ton van, or Morris LCV Van, with over 52,000 supplied to the GPO and the Post Office in total (including telephone engineers’ vans) over a period of 18 years. The GPO christened the LCV the quarter-ton van or Q type.

Civilian prototypes had been on trial since 1948, with the first production models appearing in May 1953, initially being built at Cowley alongside the old Morris series Z Van that they were to replace. The engine was the 803cc A-Series unit that came with the amalgamation of Austin and Morris to form BMC, in 1952.

From the start, the requirements of the GPO were accommodated, and the detail specifications of vehicles supplied to it differed from the standard production vans, often very much with an eye to accommodating trade unions, security or reducing costs. 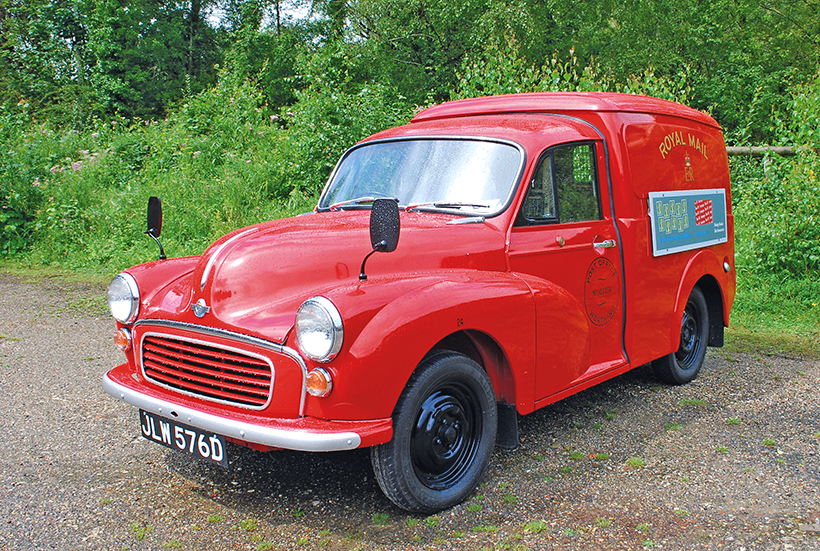 The most obvious divergence from standard was on the early Royal Mail and Post Office Telephones vans, which had rubber front wings with Lucas headlamps mounted on top, specified by the GPO to prevent them getting dented in the case of low-speed bumps in cramped sorting office and telephone exchange yards.  These vans also had an opening windscreen on the driver’s side, specified because of the difficulties the GPO had with the postmen’s trade union and the ventilation arrangements of the Morris-Commercial J. Because of this, the wipers had to be mounted on the roof.

The Mailvan’s back doors had a wire mesh security grille fitted inside the windows, plus a sturdy external locking bar which could be operated with a lever from the driver’s seat, by means of a rod running along the inside of the van’s body, which continued to be provided to all but the very last Minor mailvans, delivered in 1971 and 1972. Behind the driver’s seat there was a half-width, timber-framed mesh screen (full width on Telephones vans). Front door window quarter-light frames were painted black, while the inside of the van body was painted light straw, a yellowish cream colour. 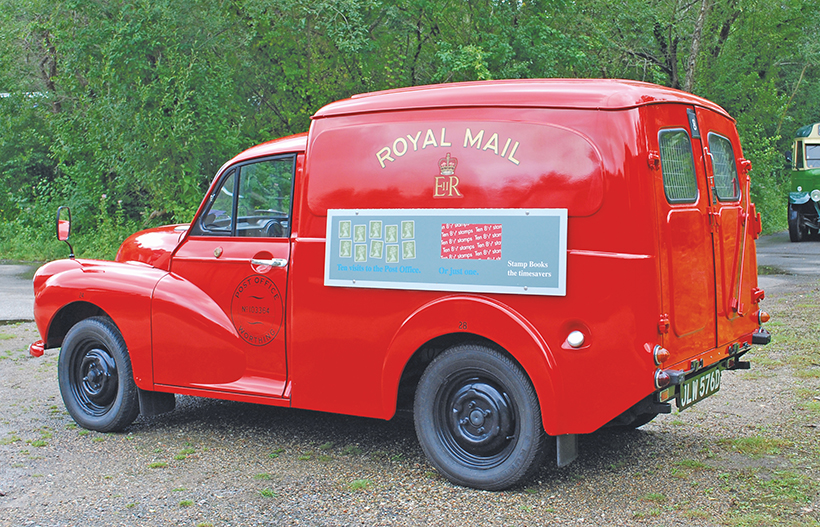 The Morris Minor 1000 was launched in October 1956, and had a single-piece windscreen and a larger 948cc version of the A-Series engine, also fitted to the standard production LCVs, becoming the Series III. Rubber wings were no longer specified by the GPO from December 1954, after complaints from the trade union that the cab-mounted mirrors created a blind spot for postmen-drivers. Mirrors could not be fitted to the rubber wings and the GPO was forced to accept metal wings, although it continued to specify them on other mailvans, the last being Morris JBs bought in 1961.

The next complaint from the Union of Post Office Workers was that the split and opening windscreens created another blind spot, and it asked the GPO to investigate the possibility of a one-piece opening windscreen. Morris Motors replied that such a windscreen was not ‘structurally possible’ and the trade union accepted the standard one-piece windscreen in March 1957, although deliveries of ‘split-screen’ Qs continued into 1958. 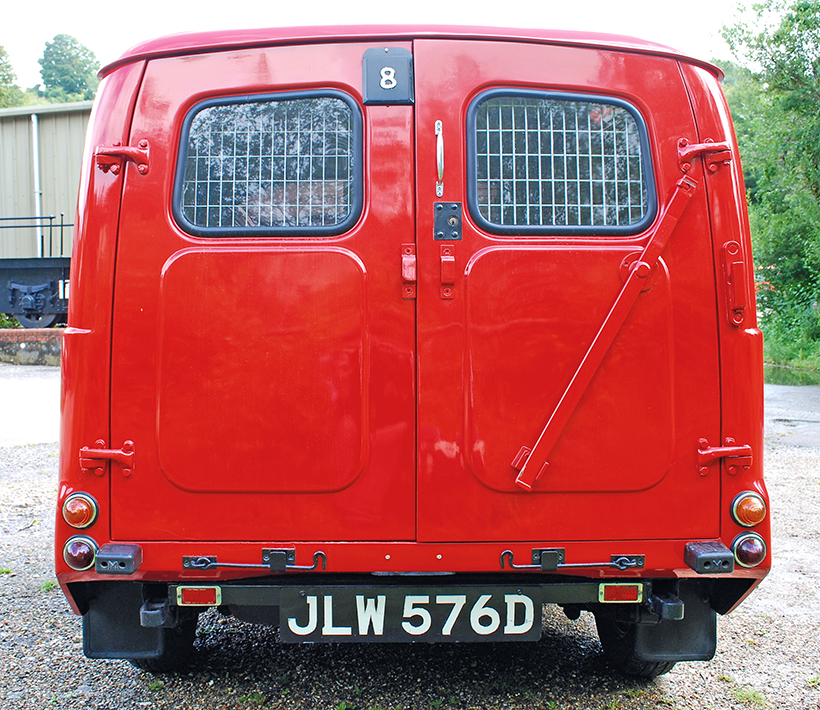 Mesh to the rear door windows and an external locking bar were fitted to all but the last Minor Mailvans.

Thirteen Q mailvans and 13 Q telephone vans were supplied with the 948cc engine in 1956/7 as an experiment on various duties (rural, urban, postal, telephones). The test was concluded as the bigger engines were considered unsatisfactory for GPO use because of increased fuel consumption. The Q van continued to be supplied with the 803cc engine until the type was superseded by the uprated M type in 1964.

From 1957, mailvans were fitted with Yale locks to both the driver’s and passenger side door, which would lock the door without needing to use a key when it was slammed shut (the key was needed to open it to get back in, of course). I say ‘passenger side’ but, actually, I should probably refer to it as the ‘nearside’, as no passenger seat was normally fitted to GPO mailvans. However, Head Postmasters could instruct that one be fitted if a particular van’s duty included the transport of a second postman to the start of his ‘walk’. 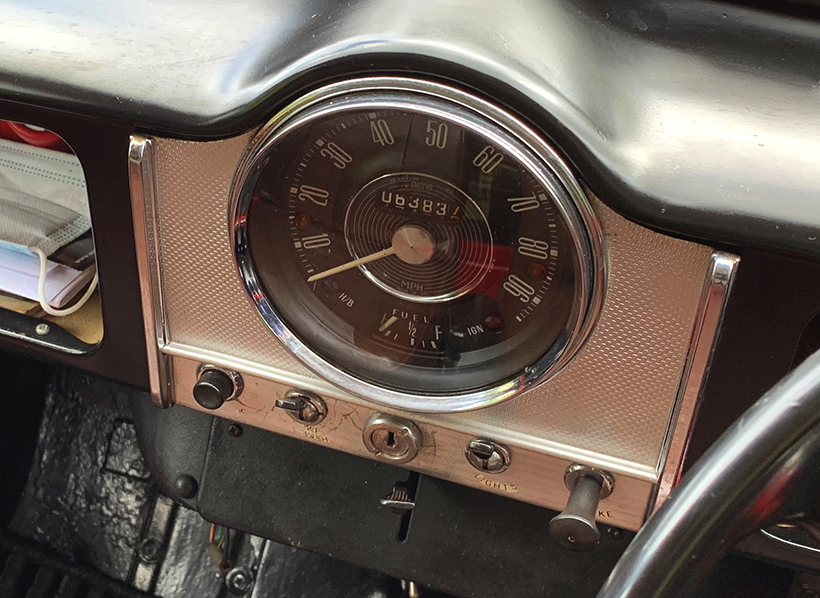 Dashboards were painted black on GPO vans. The silver anodised finish around the central dial arrived in 1964.

In September 1964, the Q type was superseded by a 6cwt van with 1,098cc engine, and this was christened the M type by the GPO, recognising its Morris Minor heritage. Dzus poster fasteners were included in the specification, enabling posters to be changed frequently (normally monthly) and avoiding the damage to the paintwork when posters had been pasted to the bodywork. Other changes at this time included the removal of hub caps from the specification, followed by the provision of large, Winfield wing-mirrors, front mud flaps and seat belts from 1966/7.

A black Post Office roundel, on the nearside door only, indicated where the mailvan was allocated, and the vehicle’s serial number. Tyre pressures were displayed above the wheel on each wheelarch, initially in white but, towards the end of production, this changed to black. 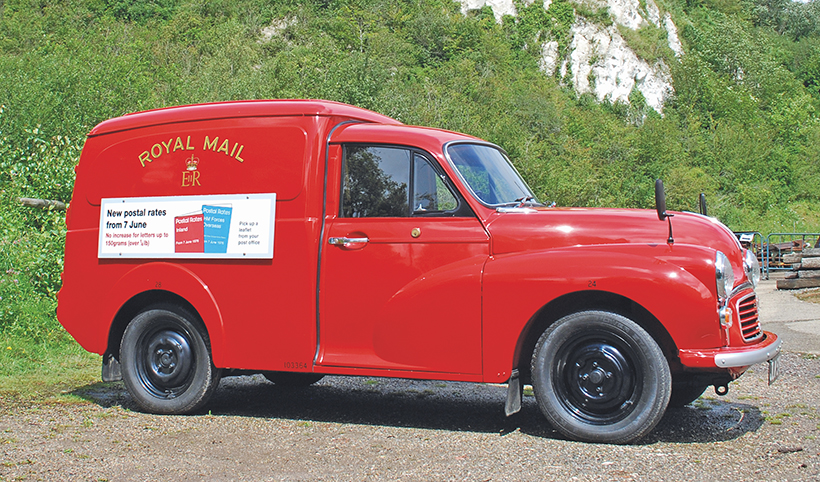 Inside, the dashboard was painted black, rather than in body colour as on standard production vans. The seat was also black, and black-painted metal door trim panels (held in place with screws) were fitted to be more durable than the doorcards on standard vans.

From 1968, the Post Office changed to a slightly brighter shade of red for its mailvans, now Currant Red instead of Post Office Red, which was now also used on the inside of the cargo area.

Worthy of note is the fact that the Post Office ordered 5,192 Minor vans for its 1971/72 requirements, with delivery from Adderley Park by March 1972. For reasons never established, a further mailvan was delivered to Dorchester at the end of March 1972, with chassis number 327369; the very last LCV chassis number. It was registered SJT 908K in July 1972, worked at Blandford and was sold in October 1978. 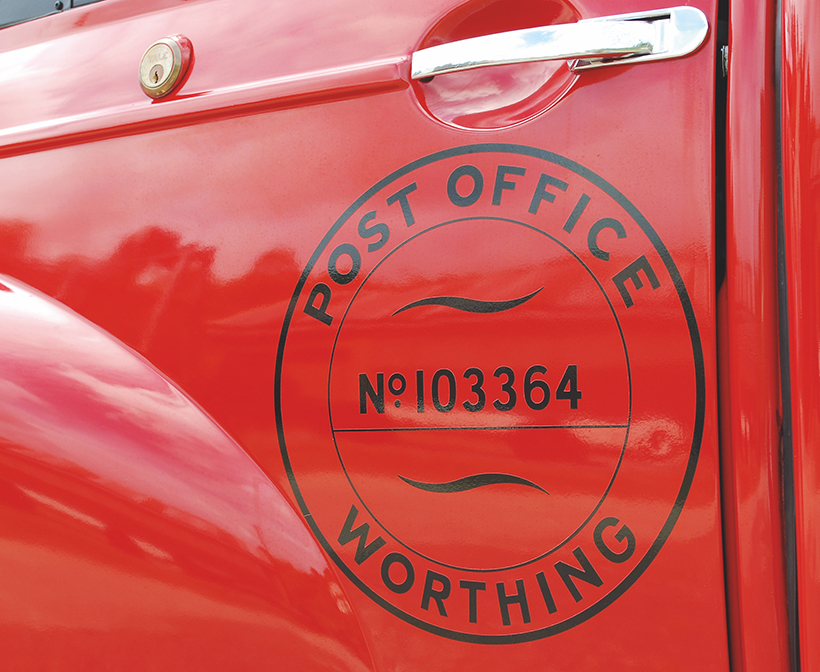 The original GPO Serial Number and depot allocation – this van spent its working life in rather genteel surroundings on the south coast.

Andrew Mills from East Sussex owns the 1966 Morris Minor mailvan you see here, one of a batch of 1,000 registered JLO 166D and JLW 1D to JLW 999D (although two were re-registered for use on Jersey, and two more on the Isle of Man). The GPO paid £279 for the 1966 mailvans and £346 for the 1966 telephone vans, with their ladder racks and interior binning adding a little cost.

JLW 576D was allocated to Head Postmaster Worthing, and was based at Storrington in West Sussex. After service it was owned by Cunningham, Rustington, West Sussex, and passed to Dave Elder of Colgate, West Sussex, in 1984. It was fully restored to Royal Mail livery by July 1986; one of a collection of GPO vehicles restored and rallied by Dave in the 1980s and 1990s. It had, though, left Dave by September 1997 and, by all accounts, fell on hard times. By the time it was acquired by the Mills Brothers, it was in need of a second major restoration. This was carried out with assistance from mechanic and vehicle bodybuilder, Gordon Samuel, and it’s a testament to the quality of the work carried out that, although the rebuild is now 12 years old, it looks like it was done only recently.

Andrew and his brother, Simon, may be familiar to regular readers, as they own and restored the now very rare Austin-Morris J4 mailvan, that was featured in January 2020’s Classic Van & Pickup magazine. They also own a pair of fully-restored, yellow Post Office Telephones Minor vans, a Minor pick-up, a GPO Morris series Z Van, a yellow British Telecom Morris Ital van that has only done 37,000 miles from new, an original, unrestored Ford Anglia Van and are currently restoring a 1973 Bedford HA Telephones van.

In the late 1970s, the Mills Brothers used to buy old GPO vans at auction from Sussex Car Auctions at Heathfield, in East Sussex, (also one of my haunts at the time. Ed), paint them up and sell them on. Many of these were Minor vans, which they’d typically repaint in green and sell for £150 apiece. 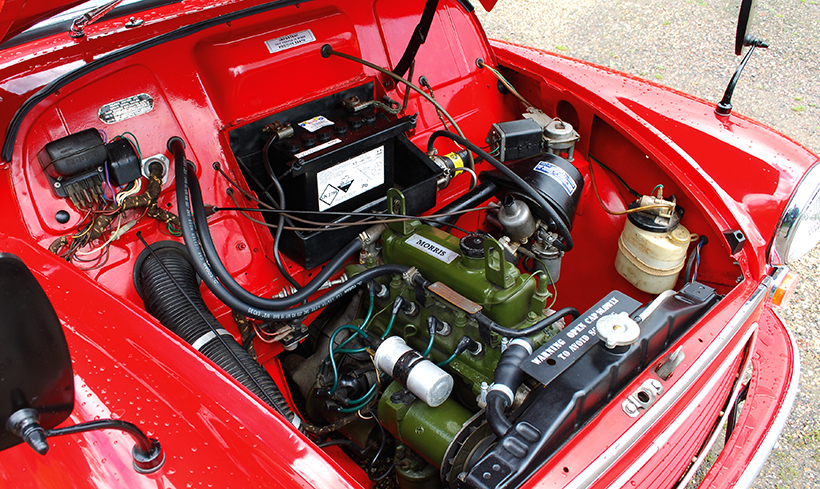 The van’s original 1,098cc A Series engine just needed a good service. The GPO effectively went from 803cc to 1,098cc; a small number of 948cc vans were trialled, but found to use more fuel and offer no tangible benefit in return.

“All of a sudden, we realised that they’d all gone, so we decided we’d like to restore a few,” explains Andrew. This red mailvan was pretty good mechanically when they got it, with the original engine just needing a good service. The body and chassis were a different story, however. “It all pretty much fell apart,” recalls Andrew. The cab and rear body were removed and an original replacement chassis was sourced. A new crossmember was fitted and new floors were needed in the front as well as new sills.  Even one of the door posts had to be cut out and replaced.

New gutters – the Achilles heel of Minor vans – had to be welded in all round but, as with little Ern, you can’t see the join! The rear doors are the van’s original ones with the dents beaten out, but the rusted-out front doors were replaced with those off another mail van which, fortunately, had the Yale locks fitted. The original rear door locking bar was luckily in good condition and was refitted, as these are difficult to get hold of.

The inside rear wheelarches had rusted away where they met the outer van body, so new outer pieces from an original van had to be patched in, as the replacement pattern arches are a different shape.

Two seats are fitted in the front, trimmed in civilian brown, rather than just a single, black one as would have originally been provided to the GPO, so at least the driver doesn’t have to travel everywhere alone.

When Andrew first got the van, there were a few shreds of the original adverts still in place on its sides, but there was enough to identify them, so these have been reproduced. 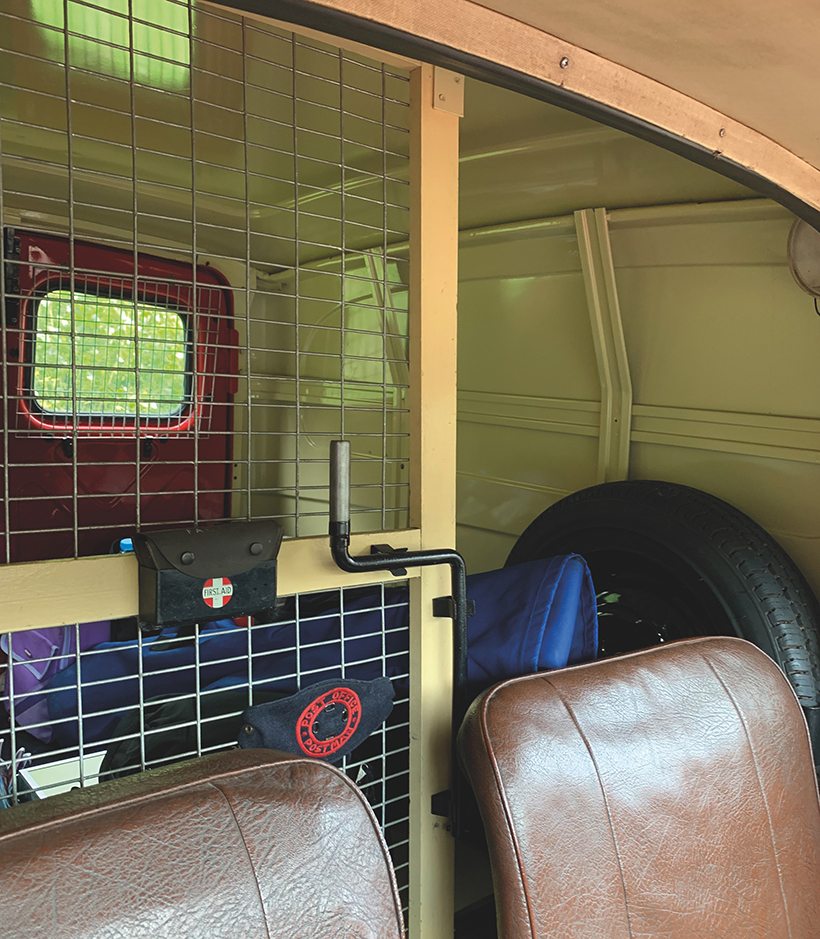 Half-width mesh screen fitted behind the driver on mail vans. Until 1969, the rear body was painted a yellowish-cream colour inside.

“This Minor is quite a quick one which will keep up with modern traffic, and pretty quiet. They do seem to vary a bit,” notes Andrew.

The red mailvan had been driven to Amberley Museum’s Communications Day with Commercial Vehicles by Gordon Samuel.  The brothers had also brought along one of their yellow Post Office Telephones Minor vans and the aforementioned J4 mailvan, and the trio were displayed outside the museum’s BT Connected Earth exhibition, together with other preserved GPO vehicles. Amberley’s own preserved yellow Minor Telephones van was on display inside, as well as its other ex-GPO vans. Click amberleymuseum.co.uk for more details. 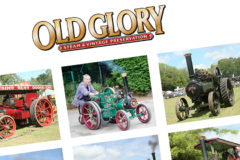 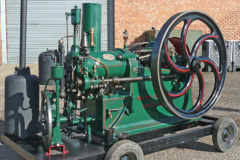