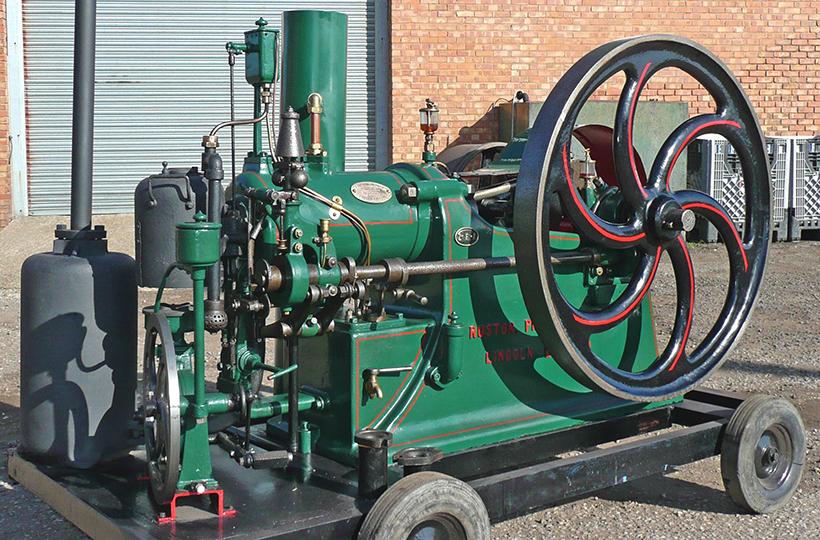 A view of the Ruston, Proctor Class Z engine.

Stationary Engine magazine readers will have gathered by now that the firm of Ruston, Proctor & Co Ltd, Engineers, Lincoln, England (as is cast into their machinery), is a favourite of mine. So, it was a delight when I, together with a friend (Mark Farmer) was invited to view, on a typical snowy winter day, a Class Z Oil Engine shortly after it had been restored.

Ruston, Proctor & Co Ltd exported all types of machinery worldwide from its Sheaf Iron Works, which 100+ years ago extended over 17 acres on the east side of the city of Lincoln, and over 2,300 artisan workers were employed on the site.

The Class Z lamp start oil engine was introduced in June 1898, and was still being offered for sale in September 1921, when the company was re-named Ruston & Hornsby Ltd of Lincoln and Grantham; this merger occurring in September 1918. Though it’s believed that the actual production finish date was some time in 1914, so many units had manufactured for possible future customers, that they were held in stock until the end of World War One, in November 1918. 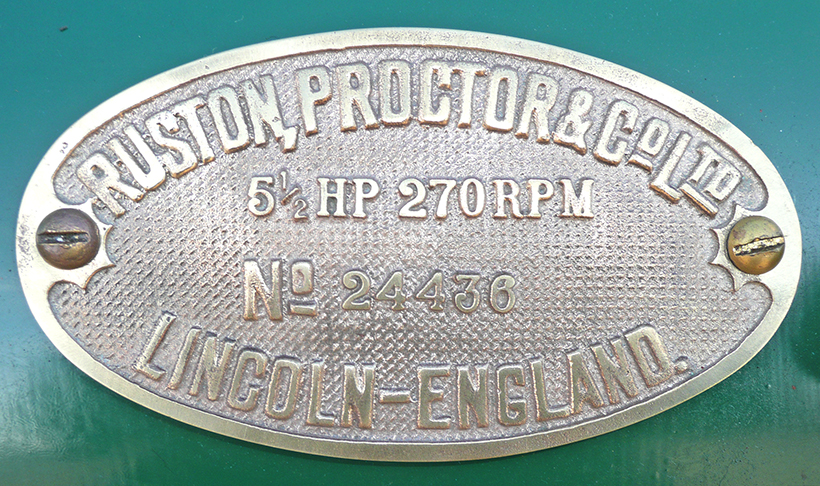 The Class Z engine was offered in sizes of 4, 5, 6, 7, 8, 9, 10, 12, 14, 16, 18, 21, 23, 26, 30 and 40 brake horsepower (bhp). I would say that the 40hp size – if produced – would have been a huge engine weighing many tons, as the engine being reviewed is. However, it should be noted that the Class Z oil engine was not the only type of engine being offered by the firm during the 1909-1916 period. There was the Class L which was revised several times; the Class O plus the Class R three-valve engines, in both single- and twin-cylinder sizes. But the foregoing sizes and classes were only built in small numbers at that time.

Ruston, Proctor Co Ltd, as we know, was sending steam traction engines, rollers and many steam portable engines and other machinery to its clients worldwide. As with all Ruston machinery, it was built to serve a long-lasting working life. The brochure for this class of engine runs through a number of salient points about the engine.

Patent Oil Engines
At the start of 1903, the firm was offering its ‘Patent’ oil engines in 5-30hp sizes, direct from stock. The larger sizes were built to order. The cylinder was fitted with a renewable, hard cast iron liner which was bolted to the bedplate which was of substantial proportions and, in the full-size base types, seconded as an oil tank at the front of the engine. 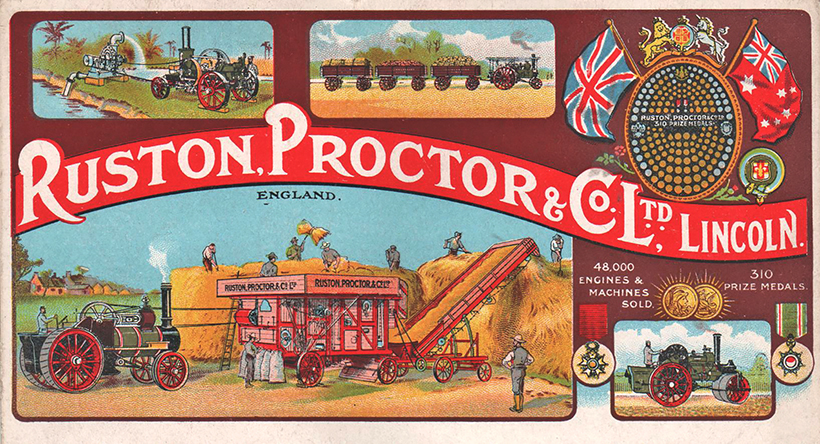 The half-base size had an oil tank either near the engine or bolted to a nearby frame or wall, which had enough fuel for one day of ordinary running. An oil pump was provided which was driven off the sideshaft, it has a ball counterweight and a handle to prime it for easy starting. The crankshaft bearings were of the best gunmetal, of extra length and diameter, which was turned and fitted to the pedestals.

The crankshaft was forged in mild steel, turned and polished, with bolted counterweights. The connecting rod was of the same material, but fitted with an adjustable, gunmetal big-end. On the 1903 models, the oiling arrangement had been updated from wick-feed on the big-end, to an oil ring thrower, which fed oil from one of the main bearing crankshaft oilers and, in later classes, became a standard feature of all horizontal Ruston engines.

Piston rings
The piston was fitted with a set of four, hard cast rings, with special removable distance pieces which, interestingly, allowed these rings to be easily taken out and cleaned without risk of breakage or distortion. The flywheels on the engines were cast with six curved spokes, and could be up-rated in rim thickness if the engine should be put to driving an electrical dynamo for lighting sets, to give steady running. 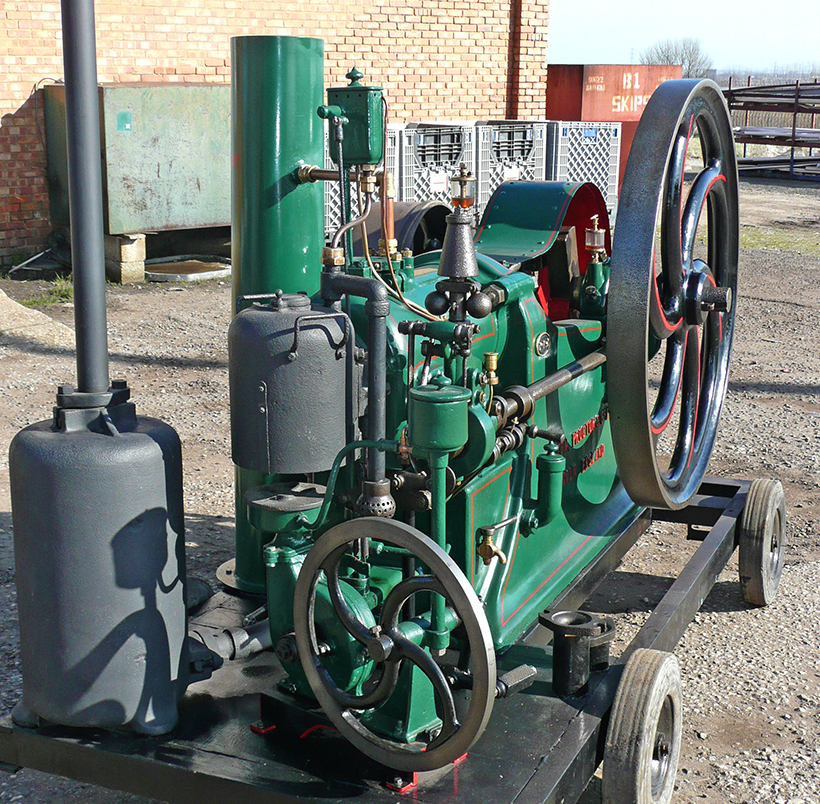 The engine seen from a different angle.

The sideshaft, driven via a spiral gear and cut in a gear-cutting machine to give greater accuracy, operated the valves and the twin flyball governors, which had a fine adjustment device that could be altered when the engine was running. The vapouriser was made under the valuable patent of which Ruston, Proctor & Co Ltd, was the sole maker. Bolted to the cylinder end, (after starting) was automatic in its action, with the oil being vaporised before entering the combustion chamber and preventing waste or problems with clogging and deposits in the cylinder.

Interestingly, the ignition tube, which was manufactured with a special mixture of cast iron, was of the semi-circular design facing downwards, and was guaranteed not to burn out! It had a large, cast iron cover which was securely bolted to the end of the cylinder. Of course, it was kept up to ignition heat by explosions in the cylinder. A starting blowlamp was provided, as with all engines of this type, and there were several ornate types offered.

Type A was similar to the ones fitted to Blackstone & Co lamp-start engines of the same period, with a vertical flame. Larger engines were supplied with a type B lamp, which has a conical base with a burner such as on the type R Hornsby & Sons oil engine. It would be most collectable today. 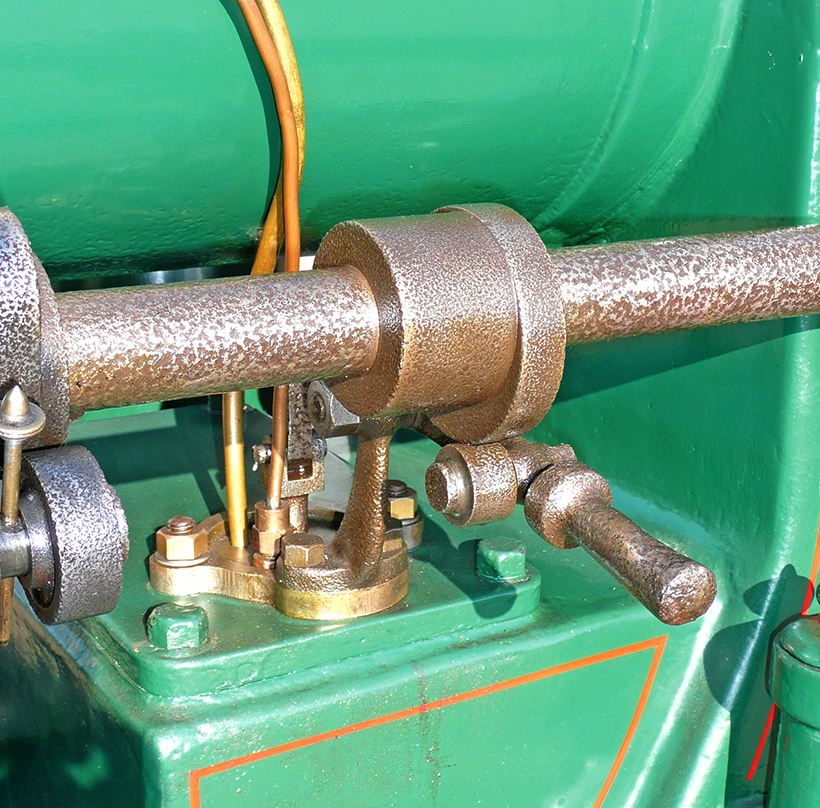 The oil pump handle is driven off the sideshaft.

Accessories available
Each engine was provided with a number of accessories, including two spare flanged covers. In fact, three were supplied with each engine; they were of different lengths and were bolted into an opening of the cylinder at the combustion end. These enabled the engines to work with different varieties of oil; after all it was quite possible that an engine could be shipped to the company’s agent, Agar Cross Ltd in South America, where oil of a very different quality was available,

A special oil-tester was also supplied to check the refined petroleum at the place of work, so one could determine which of the three covers was to be used to obtain the highest efficiency of running. A cast iron exhaust box of the correct volume for the size of engine was also supplied; perhaps it’s not appreciated that there was a formula for calculating the size to give the ‘back’ pressure for good running.

Three oil cans were also included in the package, as well as a set of spanners, a sheet of jointing material, a special ‘T’-headed screwdriver for grinding in the valves, a gear wheel gauge for the skew gear on the camshaft, a book of instructions with useful information and a foundation plan, as well as a standard arrangement drawing. 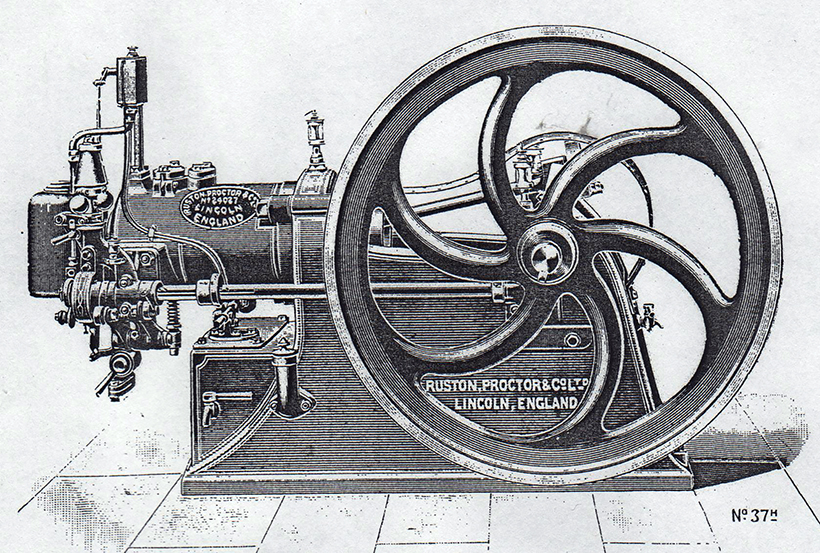 Other spares, including two piston rings, two steel ball-valves for the fuel pump, a complete set of springs for the valves and one 180° ignition tube. Lastly, each engine was supplied with a Certificate of Engine Test, which showed the order number and, of course, the machine build number. Generally, the engines were run up on test over a three-hour period in the works test-house, where various readings were taken and noted. The Certificate was signed by the tester on behalf of Mr Frederick H Livens, chief engineer, who had a working life with Ruston over a 50 years. 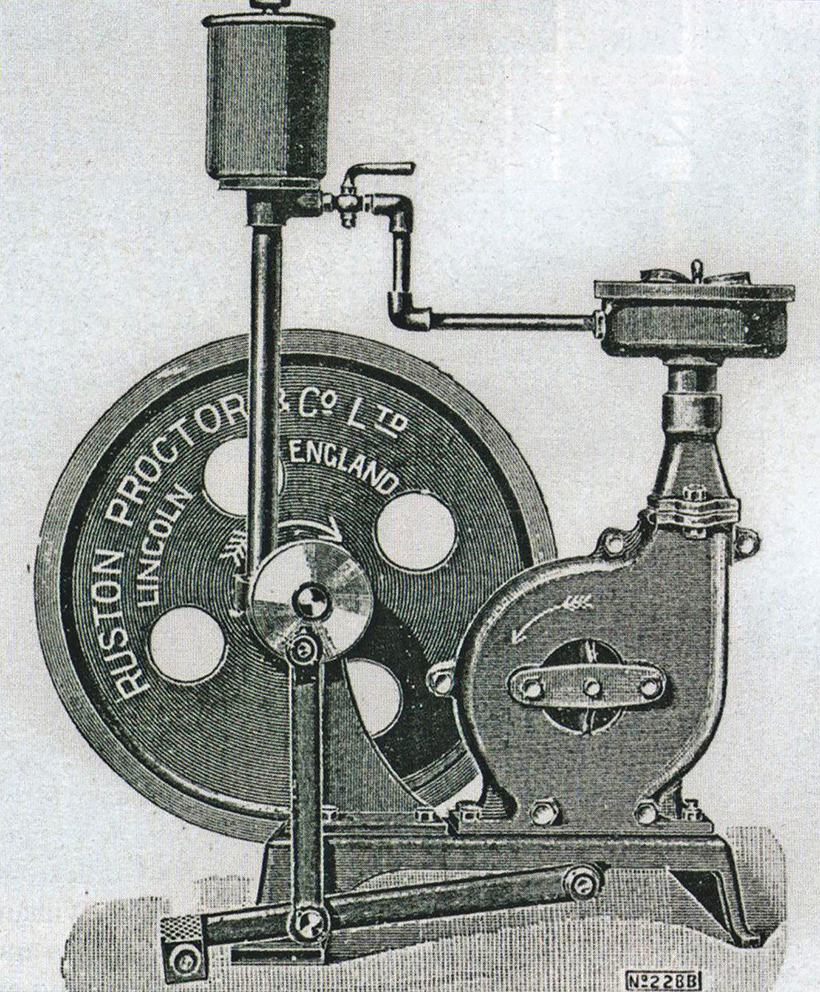 A drawing of the foot-operated starting blowlamp for these engines, which was supplied for use with Ruston, Proctor engines around 1900.

Other accessories were supplied at an extra cost, and these included a standard driving pulley, a set of foundation bolts, with nuts, washers and cotters, a standard exhaust pipe some 15-20 feet long and a water tank. Engines of over 16hp required two such 300-gallon tanks. Lastly, a friction clutch was also offered, as opposed to a set of ‘fast-loose’ pulleys. 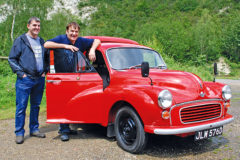