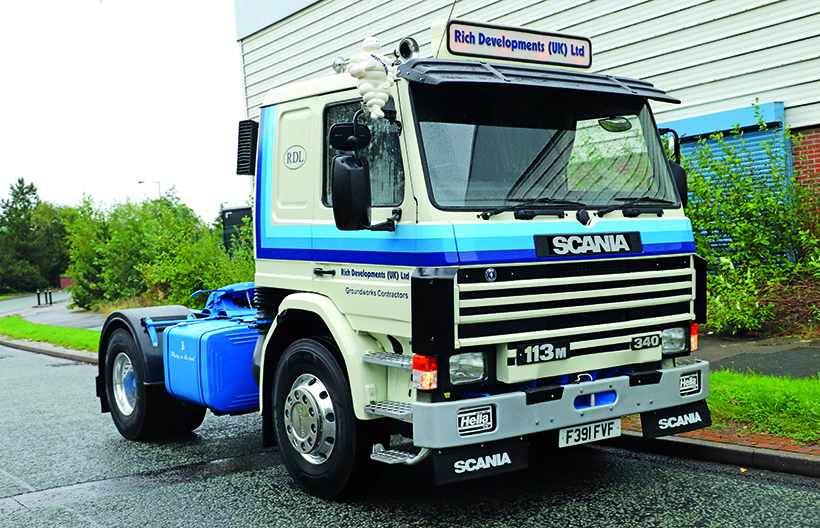 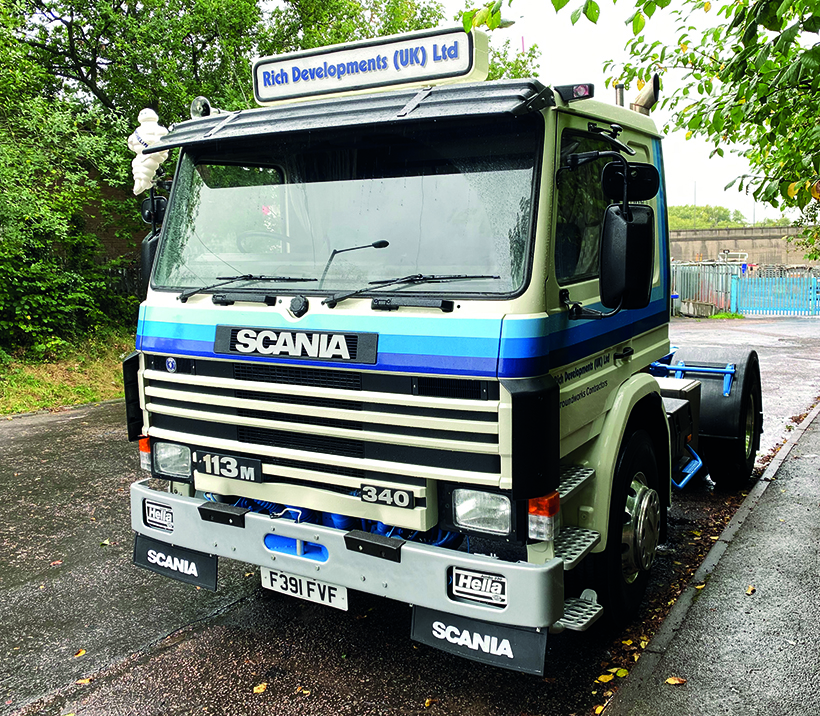 The Scania P113 was a typical fleet motor for its time, but could have a sleeper cab, as is the case here.

But this P113.340 4×2 tractor unit featured here is something of a ‘nearly man’. It was bought by Richard Thomas, as featured in HC a couple of issues ago, with the intention of putting it back to work with his Rich Developments business. And it would be earning him a corn were it not for a last minute change of plan when a Version 1 FH12.420 came his way for a bargain sum that it was too good to turn down. 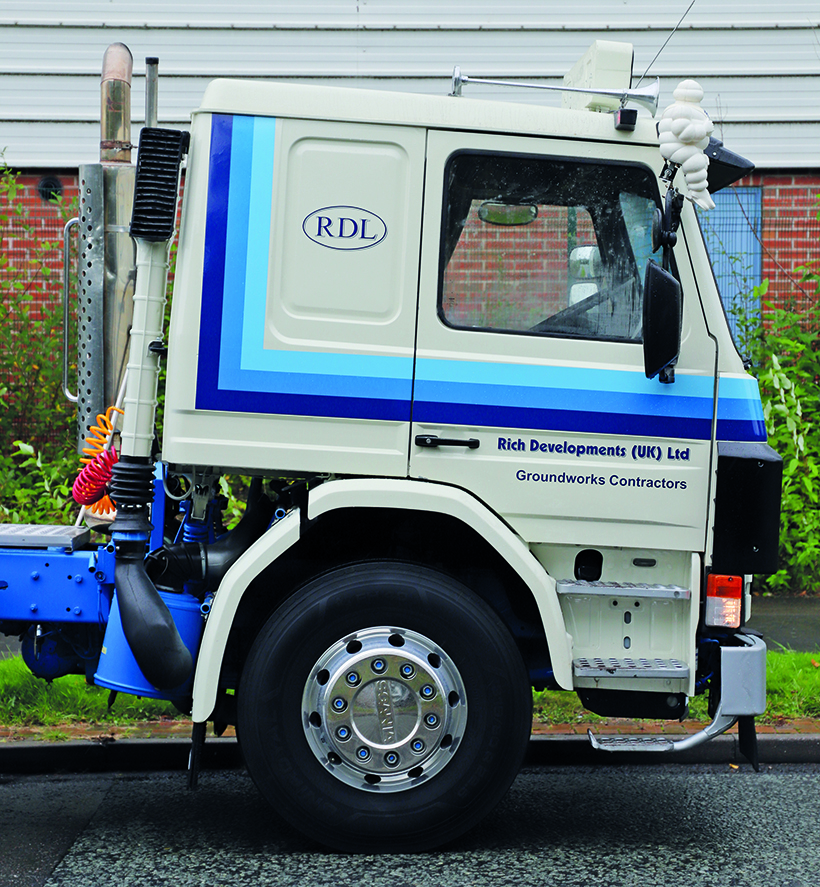 The new cab was part of a modular system introduced by Scania in 1980 which led to some commonality of parts with the T, G and R series cabs.

So the P113 lost out on returning to the payroll, and instead has become another of Richard’s growing collection of superbly restored lorries and living a relaxing life of Riley, unless the call to go to work does indeed come calling!

Irish heritage
The truck was new in 1989 in Ireland and Richard says he bought it “without actually seeing it.” He adds: “The chap selling it, Garrett O’Reilly, sent me some videos and I decided to take a punt on it.” 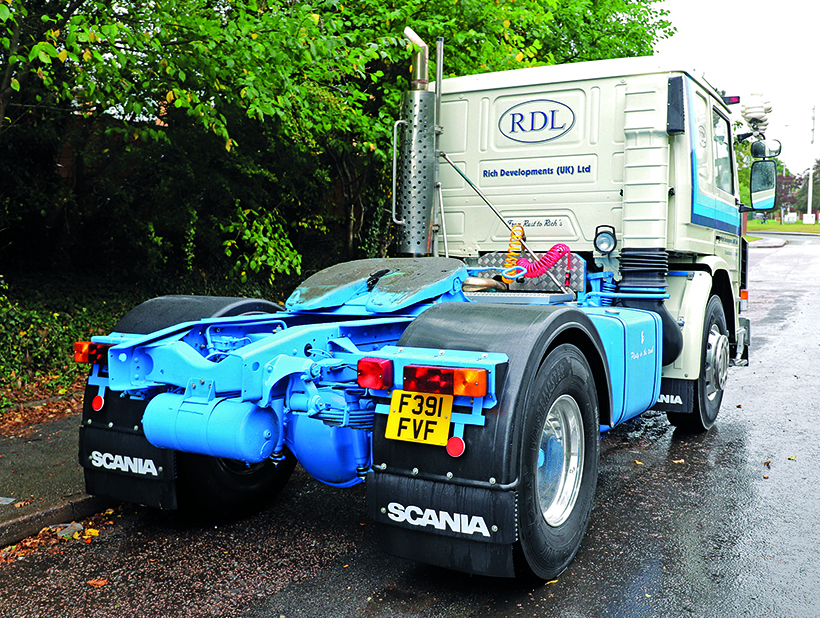 The truck has had a full overhaul and was originally due to be put to work, a move that was kyboshed at the last minute when a Volvo FH12 became available.

The truck used to have a crane mounted behind the cab. It was new to a gypsum company and then sold to a garage in the Republic of Ireland to shunt trailers where the crane was used to lift engine and gearboxes out of other trucks.

“It hadn’t been used on the road in years,” says Richard. “We agreed a deal and Garrett brought it over to Shrewsbury. He deals in Moffatt forklifts so was able to bring it on a trip with some refurbished Moffatts. I collected it on August 6, 2020. 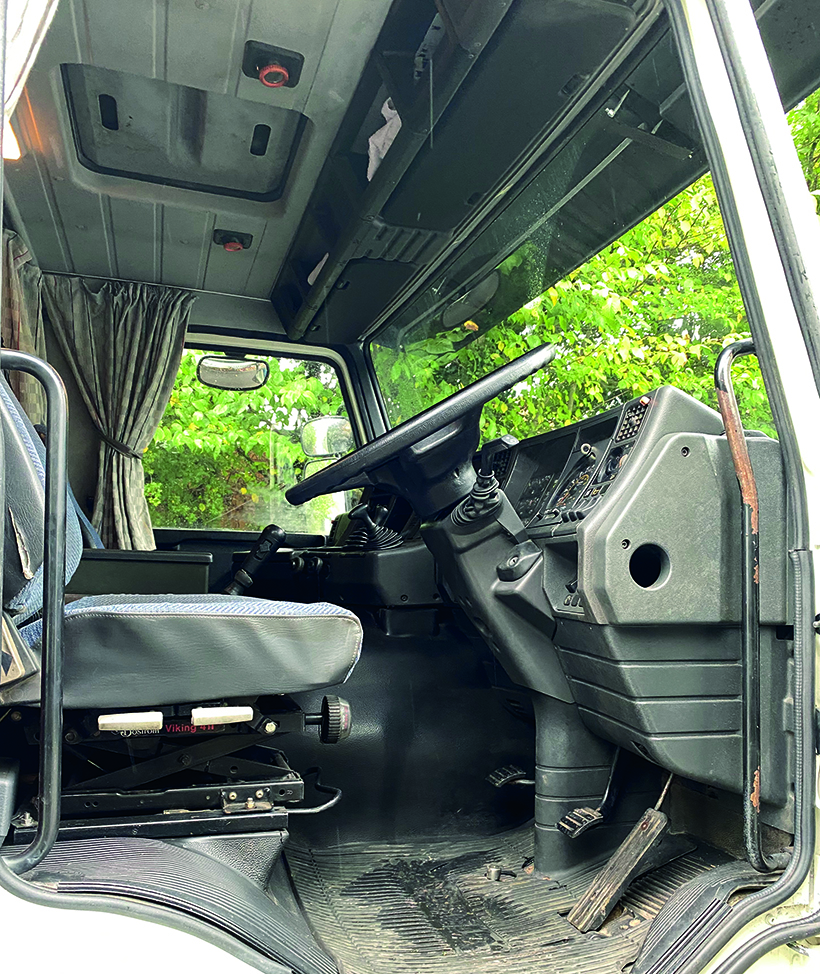 The cab is compact and bijou. It’s a nice place to work in and the low height gives a good view of the road.

“The truck had been advertised on eBay and I looked and it, and we got talking. I paid £10,000 for it – and I didn’t bother to haggle. I must have had a bang on the head to do it. I even paid for it before getting it! Garrett wanted to buy my Mercedes 1626, but there was no way I was letting that go!”

Once back in Richard’s Walsall workshop it was time to see what he’d actually bought and what needed doing to it. As mentioned, at this time, it was fully intended this truck was going to be out to work, so its overhaul needed to be good enough to allow it to give several years’ reliable service for Richard, who also uses a classic MAN 17.192 as his              main truck.

The dash was ahead of the competition back in the day!

“I started stripping it within days of getting it. I have to say, it wasn’t in as good a condition as had been made out. The electrics were an issue – it had no lights for start! The dash lights were all out as well.

“It needed shot-blasting and painting and the gear linkage was worn so we changed that, and the brake chambers, and also a few interior bits, I got a new steering wheel from Devon and a new seat base. 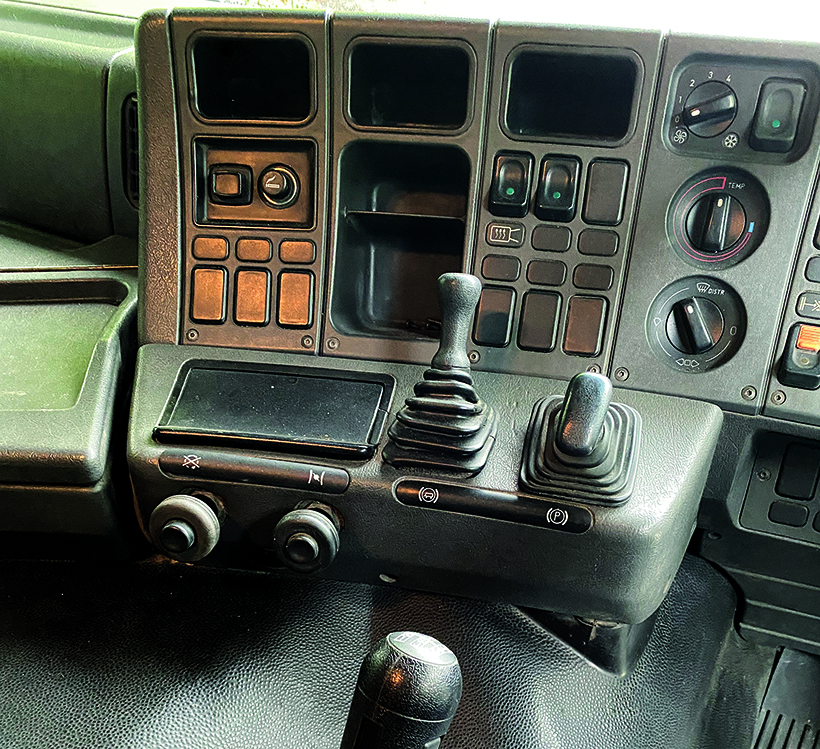 The Scania gearbox is easy to handle.

“We did the engine and chassis first. We didn’t need to take the cab off as it was in pretty good condition. Its restoration was finished as soon as December 2020 and it was fully liveried by mid-January and taken for its MoT on January 28. It failed on the back brakes so we had to reline the back brake drums and shoes. We had to bed them in but it failed again as the gear linkage had failed!

“We fitted new brake chambers but it wasn’t getting the full air pressure to its load sensors. We got eight bar on the back brakes and it finally got through its third test in the February. It was hard to bed in the brakes because we couldn’t bed them in with no MoT but we couldn’t get an MoT until they had been bedded in!” 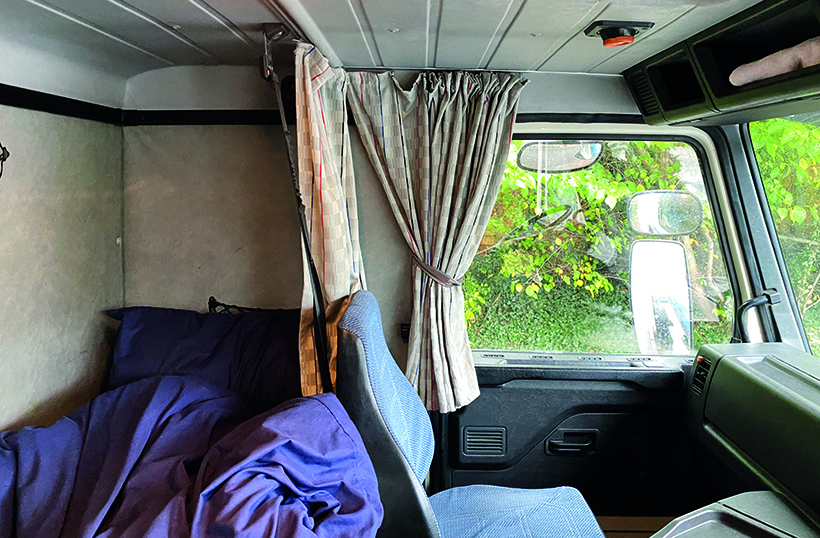 Back in the 1980s, it wasn’t uncommon for drivers to be out all week in trucks with cabs this small. Today, the bunk is there if Richard needs to bed down for the odd night at a show!

Usurped at the last!
Says Richard: “I’d got it completed, and sign-written and it was then, just before I was about to tax it, that I decided not to put it to work because I’d been offered the FH (in February) which I’d bought from Southampton. That had been rarely used and was in good nick.” But that’s another story! 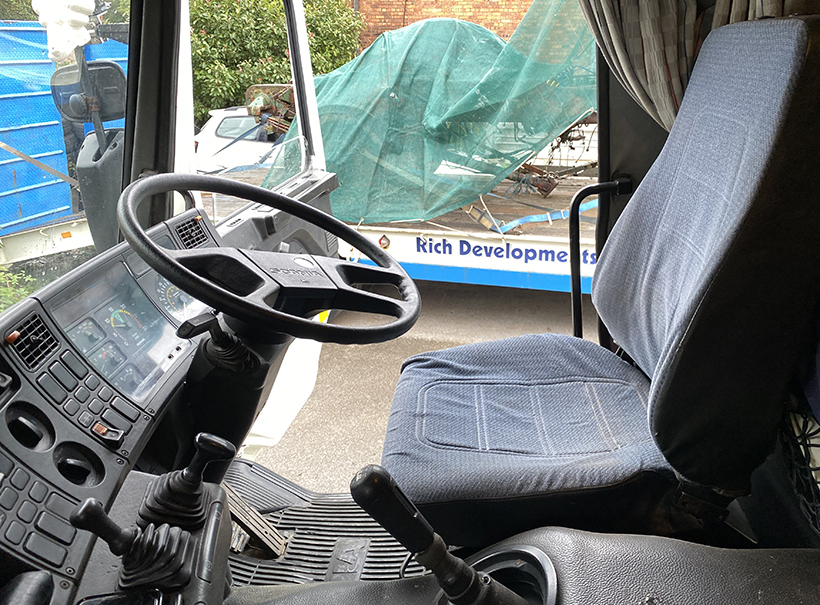 The dash and steering wheel arrangement, as well as the seats, were shared with R cab models.

The Scania is in good company. While Richard has sold his F7 – as featured in HC in June 2020 – he still owns an exceptionally rare, restored Mercedes 1626, a Volvo F10 Version 1 and F10 Version 2, and has a Volvo F88 currently being worked on with a rare Mercedes 2028 next in line for rebuilding. 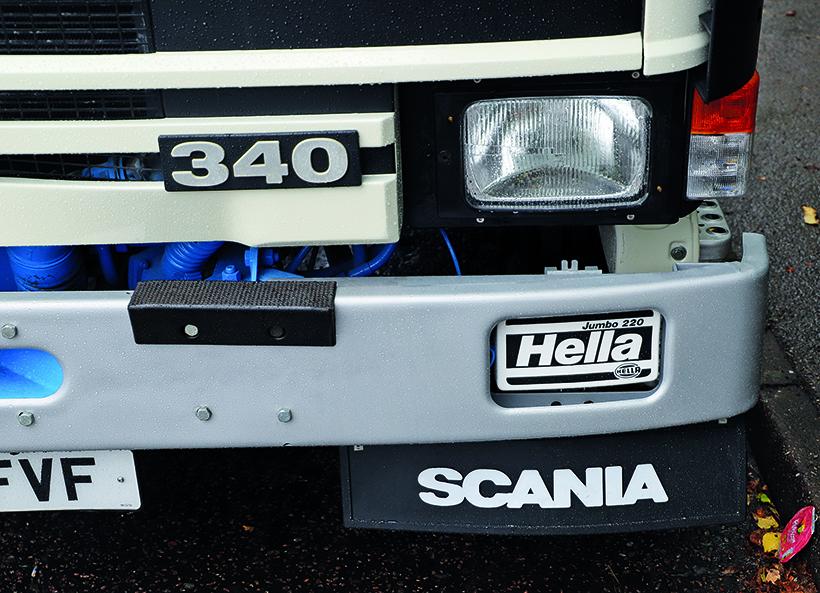 That is on top of the working MAN rigid and FH12, there is a truly knackered old F10 shunter (that, in fairness, does actually start and can move under its own power) that’s in a state of limbo between being a parts donor and a revived as a long term project.

The P113 has managed to attend a few shows and road runs now that lockdown restrictions are easing somewhat. This is one of the best restored Scania’s I’ve seen in many years and the fact it’s a little P cab makes it all the more interesting.

I have the chance to take the truck out for a spin. The first trucks I ever drove were Scania R113.360s so the same gearbox is more than familiar even to an ‘automatic monkey’ like myself! We only go for a local spin and without a trailer – the P113 can still haul a low loader and sometimes does when its taking some of its shed-mates to shows. 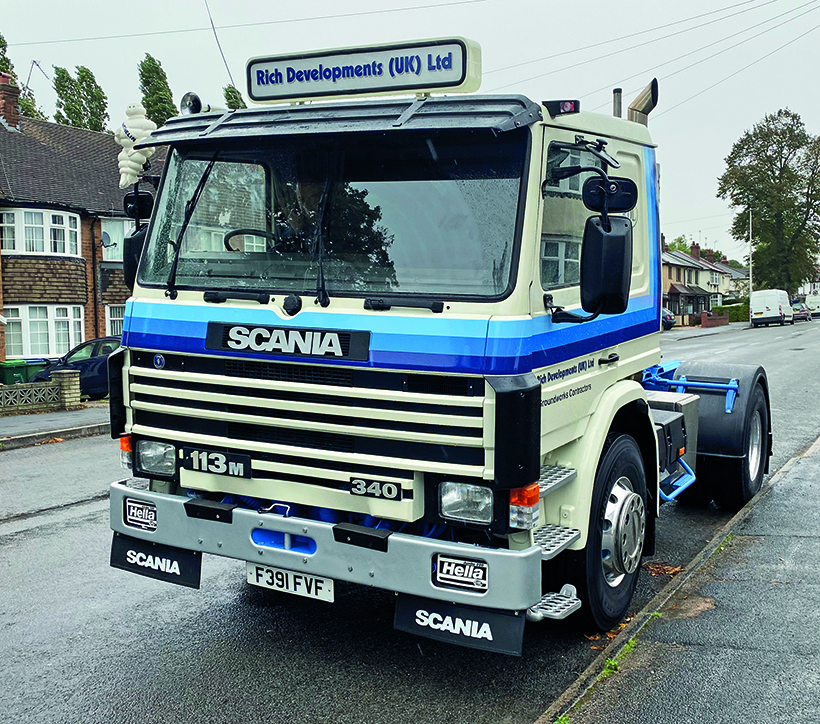 The standard of restoration is, as I’ve come to expect from Richard’s fleet, superb. It’s restored to look exactly like a decent working truck– not over the top in any way shape or form, just an authentic and traditional ‘gaffer’s motor’ from the 1980s or 1990s. And I love it for that! 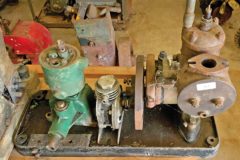 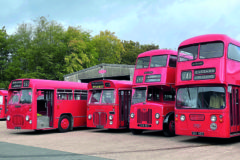