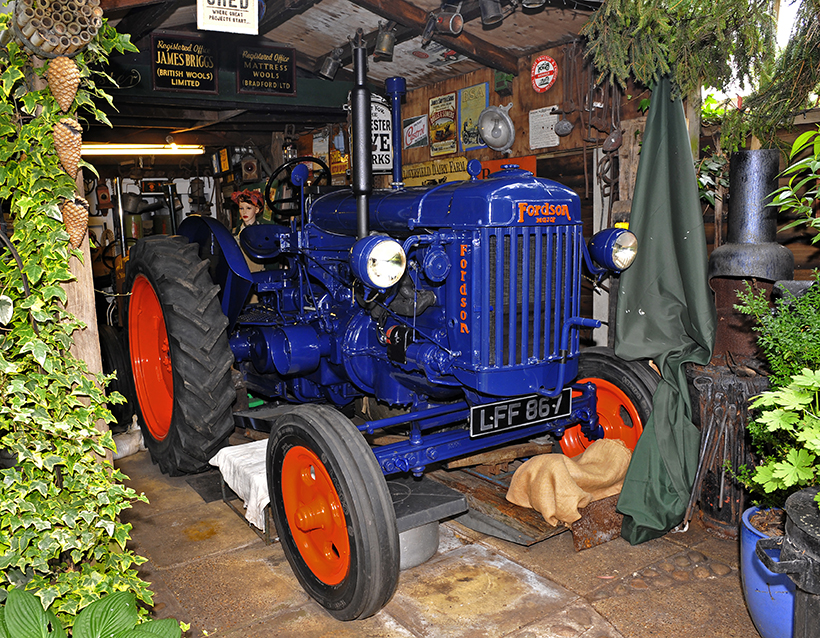 A truly Major achievement: Peter Nutley’s 1948 E27N sits in pride of place at the entrance to his Aladdin’s cave, that contains three other Fordsons, a Norton motorcycle, his workshop and 2,000+ items of period memorabilia.

The restoration of old tractors is an aspect of the hobby that attracts all sorts of people at different times in their lives. Most, though, have an interest in mechanics or an engineering background. Peter Nutley falls in to the latter group, and this is his story of a truly major achievement. He trained and worked as a tool maker and then a manager for many years, before a career change in 1990 saw him move to a job with the Essex Water Company.

As a boy, Peter was a big fan of Meccano, Triang railways and Dinky toys. He loved taking things apart and rebuilding them, so I suppose it’s not surprising that an engineering future beckoned when he left school. However, as far as ever owning an old tractor – let alone restoring one – was concerned, such an idea had never entered his head.

Mechanical fascination
“We’d been going to the Great Dorset Steam Fair for years,” Peter told me as we sat chatting in the lush and beautifully planted back garden of his Romford home. “I’ve always been fascinated by the engineering side of traction engines, but was aware that I’d never be able to own one of my own. 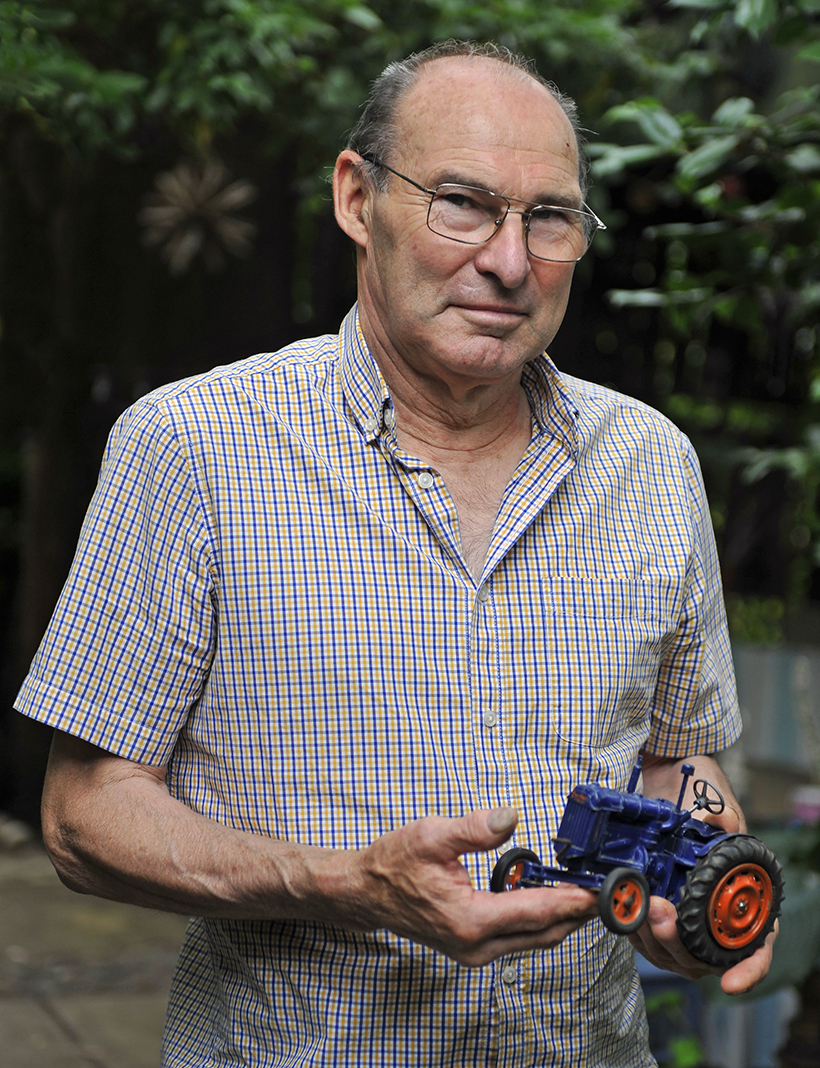 Peter with the Chad Valley E27N that, unbeknown to him, planted the tractor seed in his brain all those years ago. This isn’t the actual model he played with as a child, but one he bought more recent, which actually cost more than he paid for the real tractor!

“I was certainly into the engineering-type toys when I was a child, and have a lasting memory of playing for hours with my older brother’s toy tractor. It was a Chad Valley model of a blue Fordson with orange wheels, and was something that I took apart and painted many times. But I had no idea that it was an E27N or that, many years later, I’d buy and rebuild a real one of my own.”

It was a chance encounter with an exhibited tractor at a steam rally in Essex that actually set the ball rolling. “I came across this tractor at a show in 1992,” Peter recalled, “and the owner was also displaying a selection of photographs that documented the restoration work he’d done. Seeing those photos made me realise that I could tackle a project like that, which got me thinking.

“One of my colleagues at work regularly attended farms sales and equipment auctions and, when I mentioned to him about my restoration idea, everything slotted into place. He’d bought an old, green Fordson that he wanted to move on, and it turned out that it was a Standard N.” 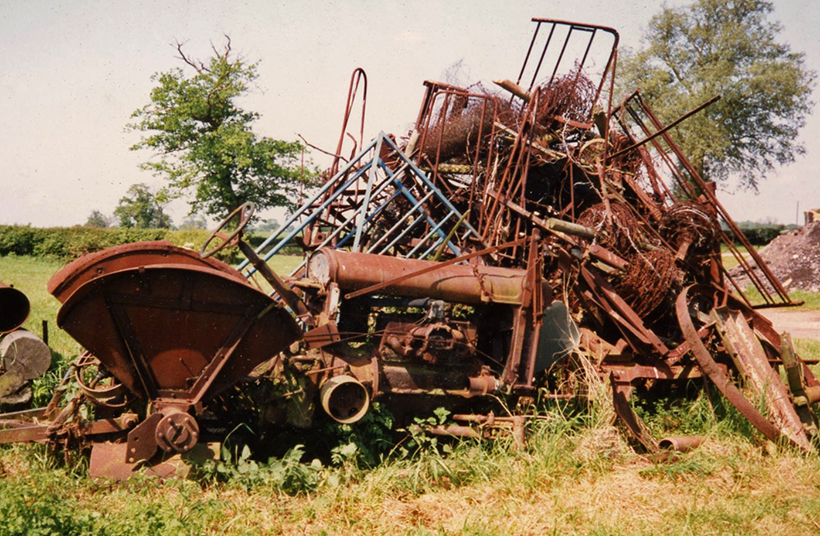 This was the pile of rusted metal containing the rusted remains of the E27N that Peter spotted while driving in Norfolk. Many would have kept driving!

The first project
“I agreed to pay £325 for it, not really knowing whether that was a good price or not; I was simply focused on getting a project to work on. It was delivered to me, at which point the first problem presented itself. It was a non-runner and I needed to move it to the back garden so, with my daughter steering and reverse gear selected, I ‘wound’ it down the side of the house and on to the patio, using the starting handle. “The restoration work was all done outside because, at that stage, I had no shed. In all, it took about six months, and provided a great learning experience. I quickly got into the very friendly tractor scene, started using good spares suppliers like Old 20 Parts, and became hooked on old tractors in the process.”

By this stage, Peter’s eldest daughter had decided that she wanted to restore a stationary engine, so he bought her a Lister B for £50, at a farm sale in Sussex. “The restoration of that was pretty straightforward,” Peter told me, “and we shared the work. Then, with the Lister and the Standard N complete, we decided to show the pair at our favourite event, the Great Dorset Steam Fair.

“Then, in 1993, my daughter wanted a Petter 1.5hp engine to rebuild and, it was while in Norfolk looking for one of those, that I happened to spot what looked like a tractor’s steering wheel sticking out of a pile of scrap metal beside the road. We stopped and investigated further and, lo and behold, it turned out to be the very rusty remains of a Fordson E27N. I managed to track down the farmer, asked if he was interested in selling it and, a few minutes later, it was mine for £80!” 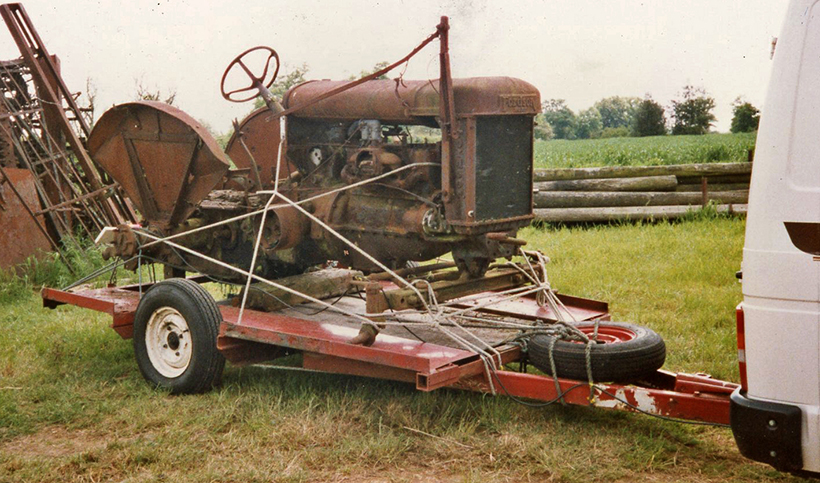 Here are the remains loaded on to the caravan-derived trailer which Peter used to tow the E27N home to Romford.

An eventful journey
“Getting it back from Norfolk to Essex was the first problem; I needed a trailer. As it happened, the work colleague who’d sold me the Standard N had one he said he’d sell to me for £50. Essentially, it was a caravan chassis, but I reckoned it would do the job – just – so I bought it. I had to fork out another £20 once back in Norfolk, to get another farmer on-site with his tele-hoist, to lift the remains of the E27N on to the trailer.

“The journey home was a slow and agonising one but, several hours and three punctures later, we arrived back in Romford, with everything still attached and in one piece. Looking back, that trailer certainly wasn’t up to the job, and I’m still amazed that the police patrol that helped me with the punctures, didn’t book me for an unsafe trailer or load. I think they must have been distracted by the idea that I was planning to restore what looked like nothing more than a pile of rusty junk!

“Of course, I had no lifting gear at home and, because of its size, the trailer had to be parked in a lay-bay across the road, opposite my house. So, getting the tractor into my back garden – where it was to be restored like the Standard N – was again a problem. 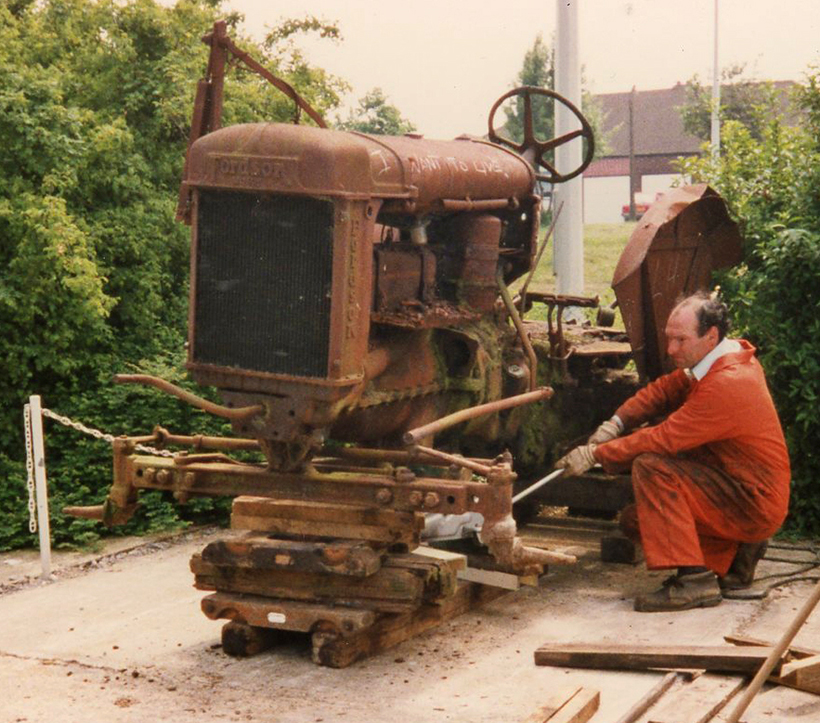 The neighbours were shocked with what he’d bought! With the trailer removed and the wooden chocks in place, the tractor awaits tripping and man-handling to the back garden.

“My solution was to start cutting up and removing bits of the trailer, blocking the tractor on wood as I went. Then, once the trailer was out of the way, I began dismantling the tractor and carrying it, by hand or using a sack trolley, over the road, down the side of the house, and into the garden. That whole process took me a couple of weeks of working in the evenings.”

Determined effort
Many people, I’m sure, would have rejected the remains of this particular E27N, but not Peter. He was determined that, despite the lack of wheels, the seized engine and gearbox and all the missing ancillary components, he’d still be able to bring the tractor back to life.

“All the castings were still usable,” he explained, “but the engine was seized solid and I found a robin’s nest in the radiator! I joined the Rochford Hundred Vintage Tractor & Engine Club in Southend, and made some very useful contacts. One of them helped me with the cylinder bores which needed to be honed – I didn’t have the engineering equipment to do that then. He sorted the valve guides for me, too.” 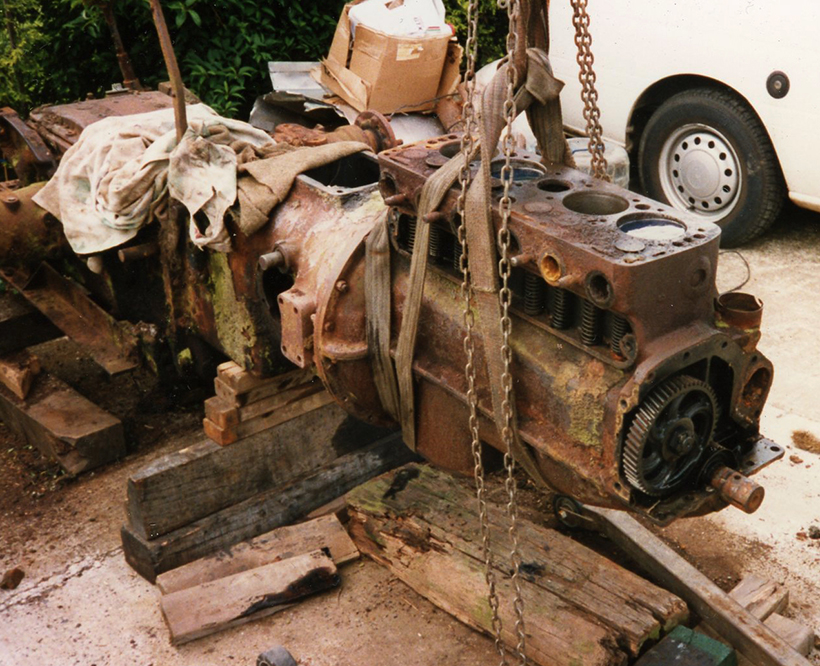 Here’s the engine being separated from the gearbox. Note the cylinders are full of diesel – the engine was seized solid.

Amazingly, the whole project was completely outside, with just a gazebo for protection, in two years, and the incredible amount of work that Peter put into the tractor is summarised in the photo sequence included here.

Sadly, a health issue has limited Peter’s ability to get out and about with the E27N in more recent times, but that’s given him the opportunity to steer his passion in another direction. Ever since he got the Standard N, he’s been searching sales and autojumbles for related, period items, memorabilia and literature. “It seemed logical to me to add interest to the tractor itself by showing it with period oil cans, hand tools and manuals,” Peter explained. “But it didn’t end there and I kept buying.” 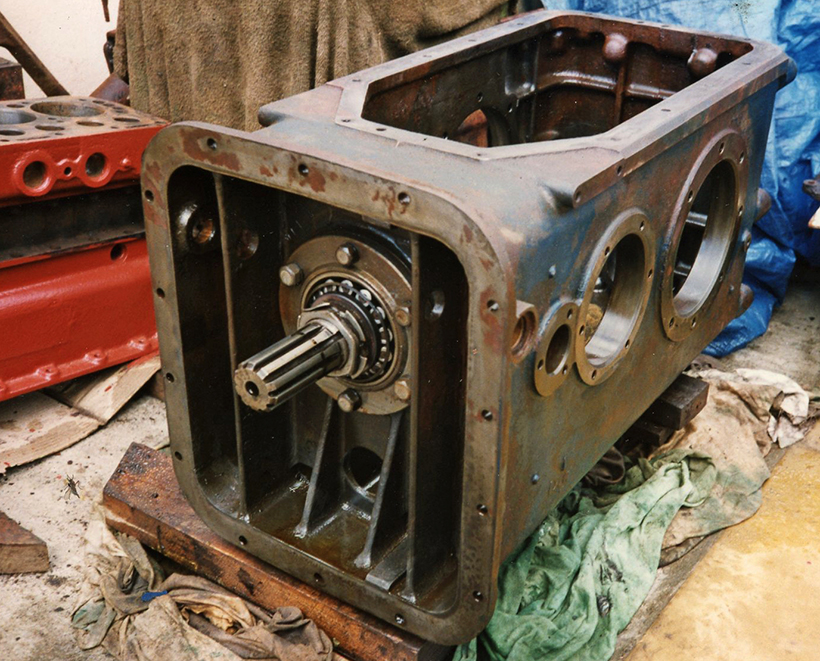 This is the rear axle casing after cleaning and de-rusting, awaiting a coat of red oxide paint.

The collection snowballed!
“My wife, Lynn, is a keen spinner, and has been a demonstrator in the Granfer’s Marquee at the Great Dorset Steam Fair for many years, so we expanded into spinning, sewing, knitting and weaving equipment. Then I decided to start collecting and exhibiting Land Army-related items. That opened the door to more general farming paraphernalia and, today, I have over 2,000 different items in the collection. But that really is another story!” 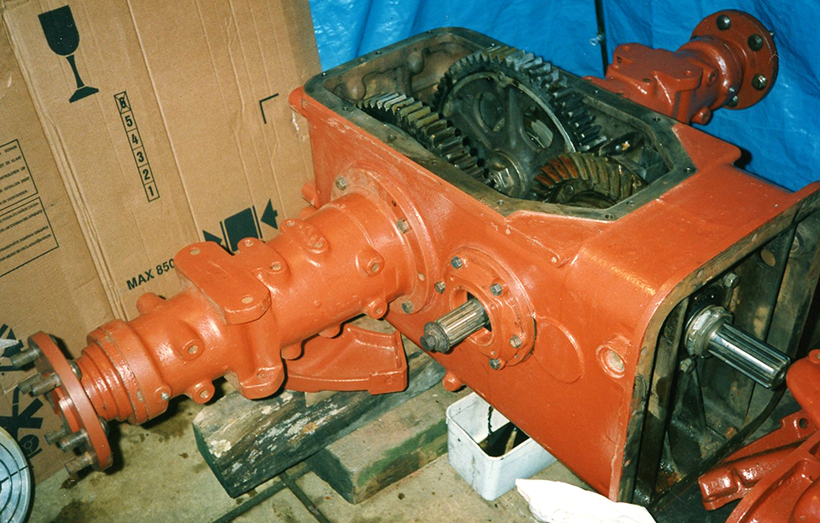 All gears and internals fitted to the rear axle, before the rebuilt gearbox was re-attached.

Peter’s achievement in restoring his 1948 E27N Fordson Major to prize-winning condition is considerable, given the daunting, ‘as found’ state of the tractor, and the fact that all the renovation work – including the painting – was done outside. Nowadays, he enjoys the benefits of a well-equipped workshop – in one section of his Aladdin’s cave-like garden shed/tractor garage/memorabilia museum – but that certainly wasn’t the case 27 years ago, when the E27N project started. 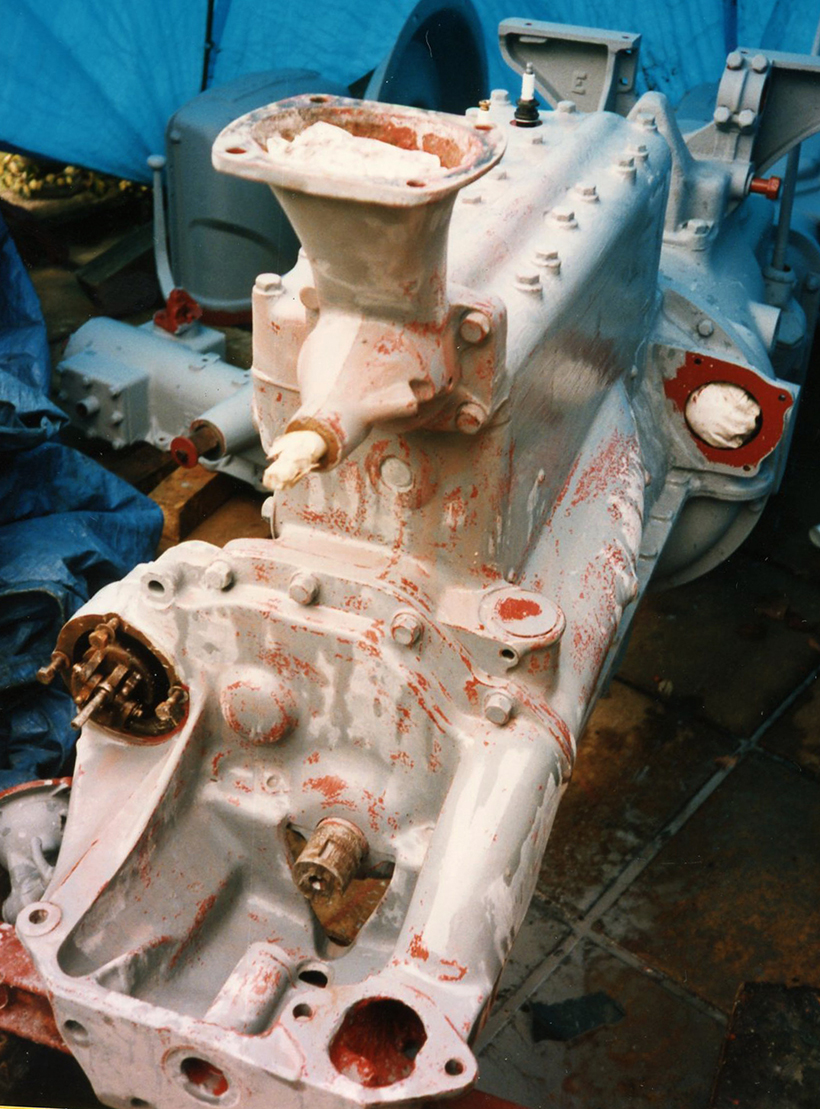 With the rebuilt engine reconnected to the gearbox, the whole lot was painted in grey primed, then rubbed down by hand. A slow and pain-staking job.

Other tractors have arrived in more recent times, including a 1926 Fordson Model F (on steel wheels), which he bought for £3,000, from a private seller in Chester. It’s in lovely, unrestored condition, the engine runs beautifully and Peter intends to keep it in its ‘working clothes’. But he has another Model F as well – a 1925 version – although this one is currently in pieces to be found in various corners of his shed. Hopefully, it’ll be put together one day. 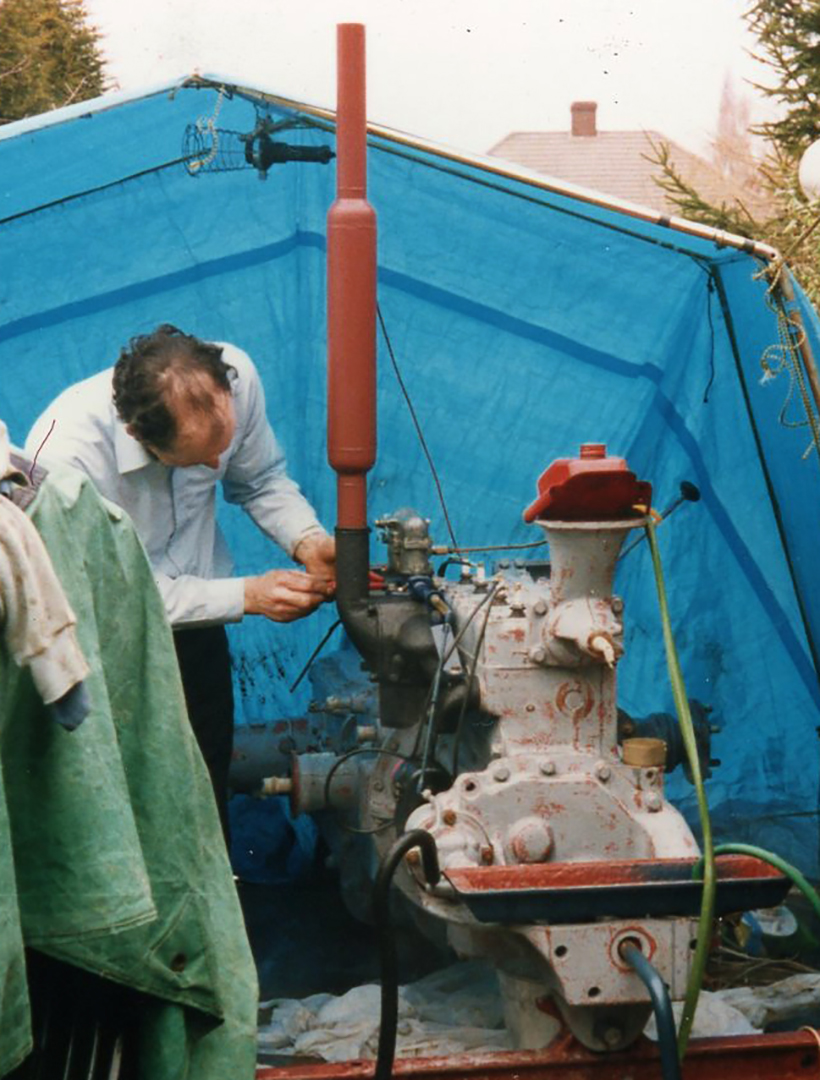 With plugs, manifold and carburettor fitted, plus temporary fuel and coolant supplies connected, it was time to test-start the E27N’s 4,380cc engine for the first time in at least 35 years. It ran first time and, while the sound was another shock for the neighbours, it was pure music to my ears!

Peter remains sanguine about the future of his tractors. “We’re not getting any younger, and my health means that I don’t get to drive them as much as I’d like. But I’m confident that my eldest daughter and her husband will, one day, take on the collection and be in a position to finish what I’ve started. They’re both restoration enthusiasts, so I know that my machines will be in safe hands. 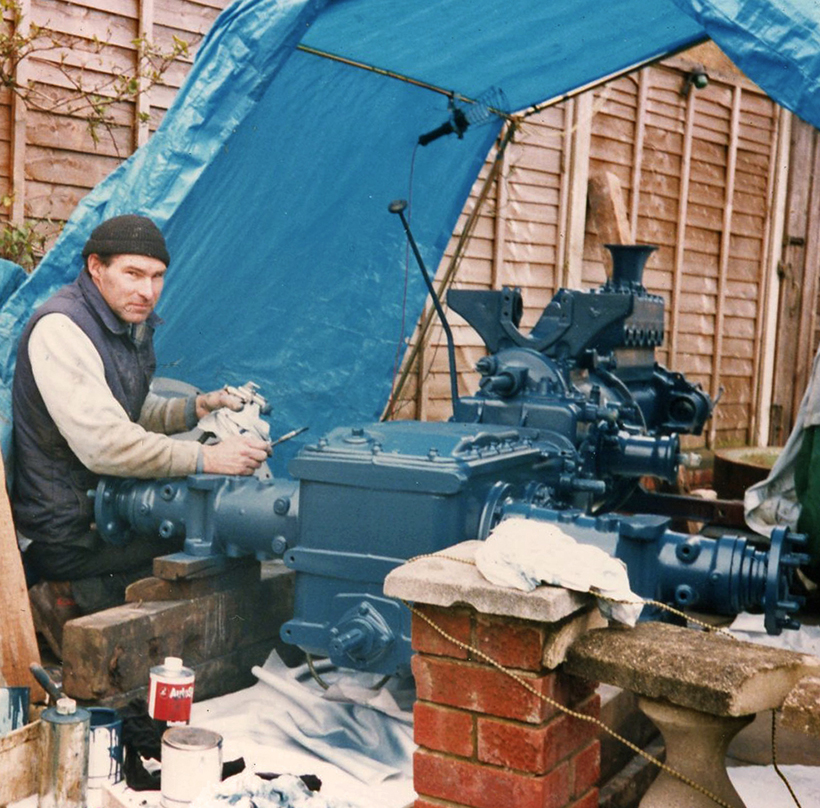 These are the primitive conditions under which this amazing restoration was carried out. Here the undercoat’s being applied.

“The restoration side of things really has been my passion; I’ve loved every minute of the work involved. They were challenging projects and I thrive on that, and I’m proud of what I’ve created so far.” Amen to that! 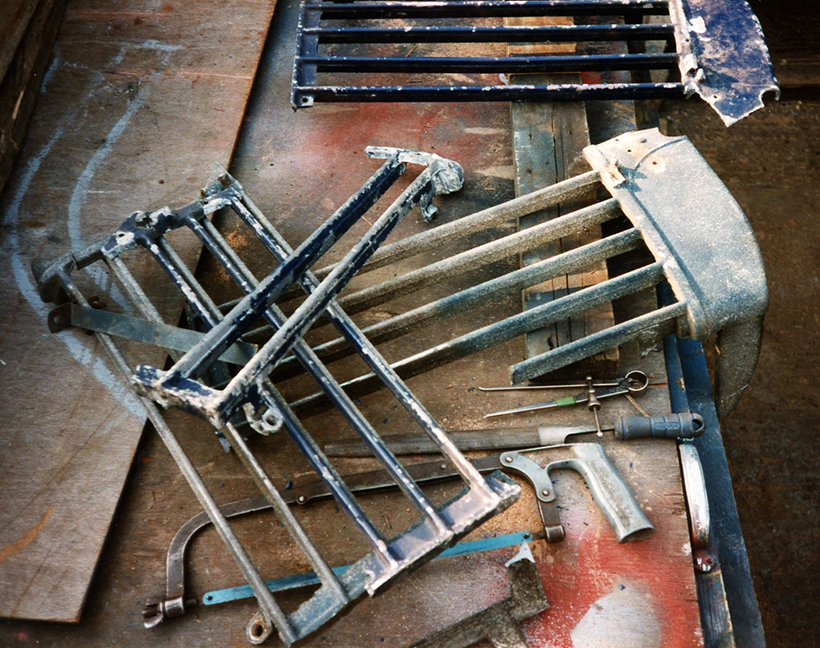 The current grille was rebuild using the best bits from two others. 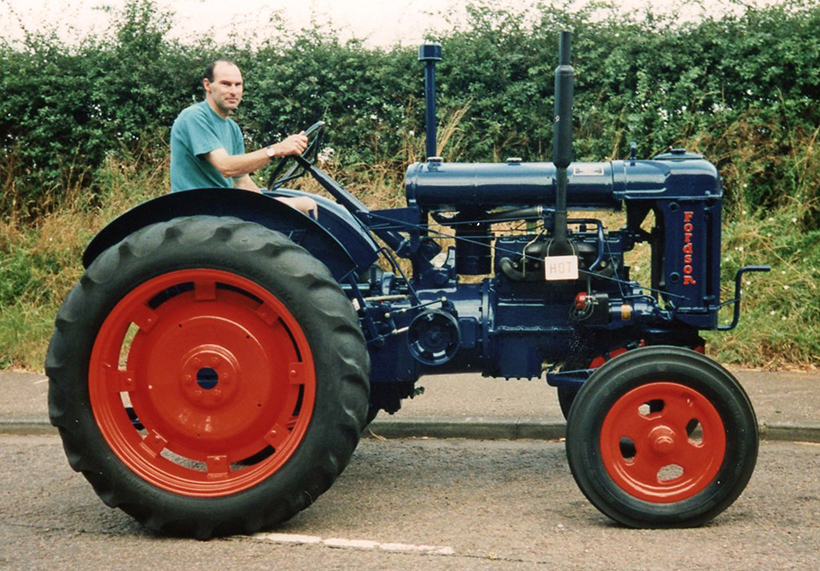 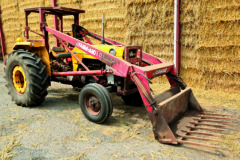 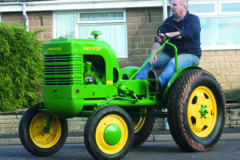 One of the smallest John Deeres ever?