Pip Dunn tracks down a wonderfully-restored Volvo F88; an iconic classic of the 1970s. This one has an amazing story to tell. 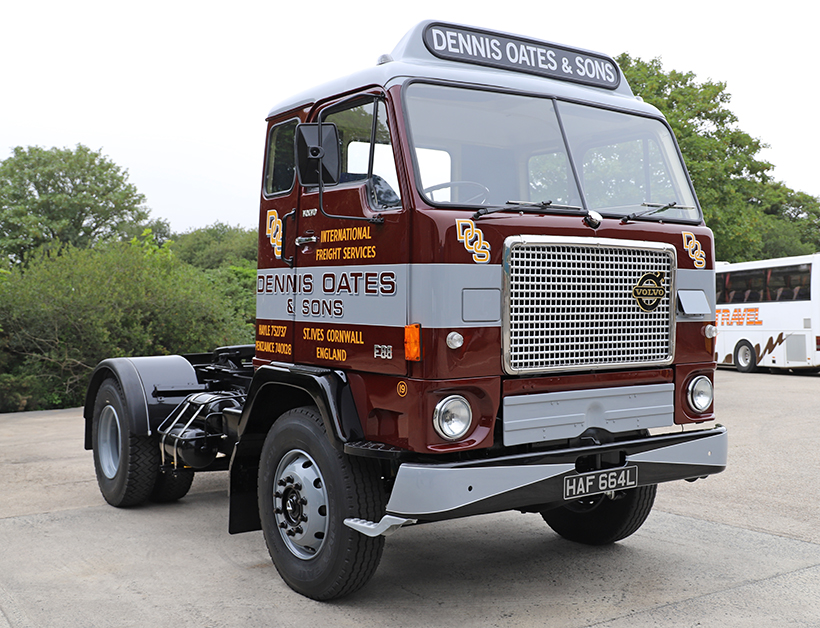 A wonderfully-restored Volvo F88; Dennis Oates bought this truck new in 1973, and has been with the firm ever since.

Older readers will probably recall the Volvo F88 and, hopefully, will remember them rather fondly. Even older readers might actually not like them for what they did to the UK truck market!

Rewind back to 1973. The UK road haulage scene was made up of great names like Leyland, Bedford, ERF, Scammel, Guy, Atkinson, Foden and Ford. Trucks were struggling to have more power than 6hp per tonne, and they were basic, having no sleeper cabs and few creature comforts. Power steering was practically non-existent.

But there were some new kids on the black. In the preceding 10 years, the likes of Volvo, DAF, Scania, Mercedes and Magirus Deutz had all started to sell their wares. Granted, they were typically a bit pricier – due to tariffs and the cost of shipping – but they also offered several advantages.

Game-changers
Compare a Volvo F88 with a Guy Big J4T; they’re chalk and cheese. Well, not chalk and cheese as they’ll both do the same job. It’s just that the big Swede will do it with more power, more comfort and probably use less fuel in the process. And, at the end of the day, the driver doesn’t have to find digs, or – worse still – kip down on a plank over the intrusive engine hump; he can sleep on a proper bunk behind the seats. If he’s really lucky, he might even have a night heater! The big, imposing, tall cabs provided plenty of room for the driver. 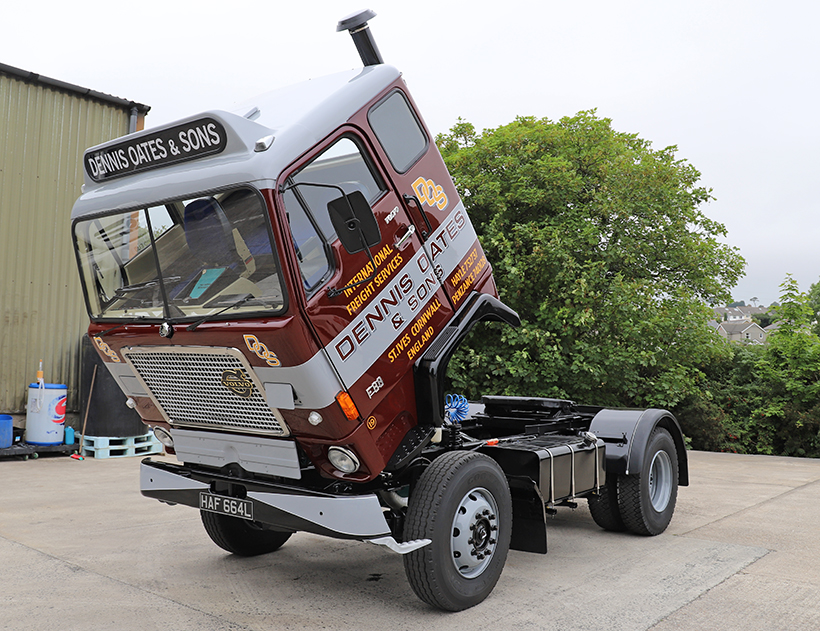 The truck has undergone a nut-and-bolt restoration.

The F88’s arrival also coincided with the expansion of the transport scene, as trucks started going further and deeper into Europe, and beyond. Going to Baghdad in an Atkinson Borderer – as some drivers did – wasn’t much fun, compared with doing them same trip in an F88.

When you make that comparison, it’s easy to see why – slowly but surely – the British manufacturers, one by one, vanished from the scene, either going bust, being taken over or simply throwing in the towel.

The Volvo F88 and Scania 110 were game-changers in the early 1970s. And it’s no surprise that they’re both popular trucks to restore now. In fact, go to any show and you’ll inevitably see an F88, or maybe if you’re lucky, an F89.

The truck next door
While I was visiting Andrew Newport and his Seddon Atkinson Strato in Penzance, he casually mentioned that the haulier in the yard next to him had recently restored an F88. So, without even needing to move my car, I walked to Dennis Oates’ yard to see what the story was.

Dennis is a sprightly 90-year-old who’s still in the yard almost every day. He’s got a fleet of seven trucks, mostly Scanias, involved in UK and European haulage. But in his shed is one of the most impressive, restored F88s that I think I’ve ever seen. It’s a Grade A restoration and has a story to tell… 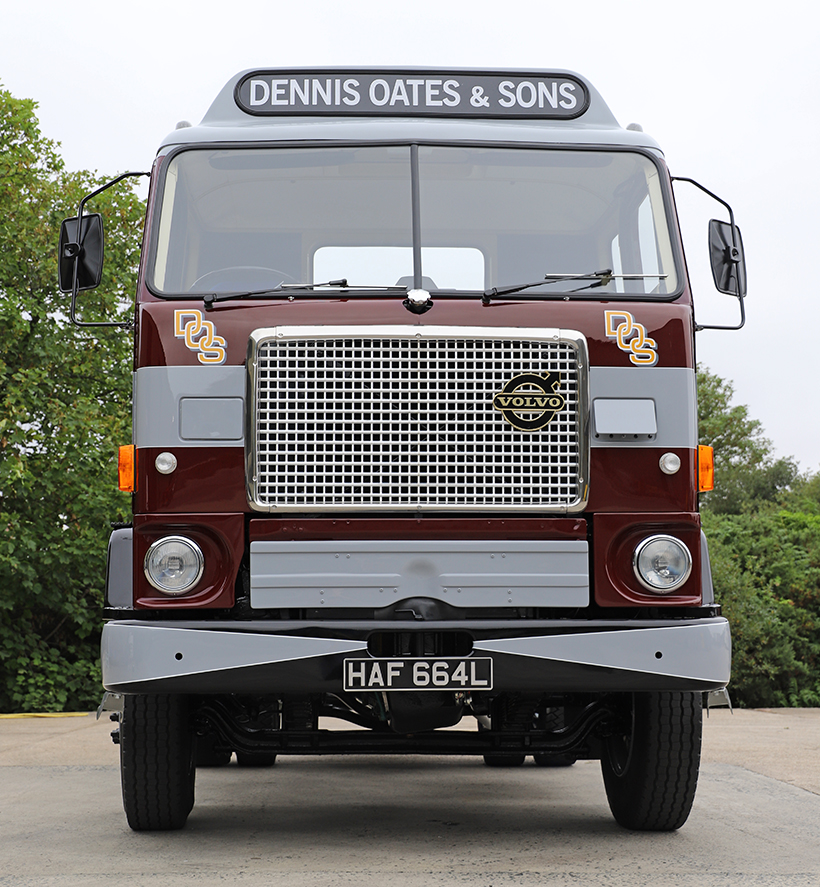 The F88 is the original model, fitted with the smaller, centre grille.

Many people restore old trucks to remind them of their past operations – either as a haulier, a driver or an owner-driver. It rekindles their passion for those far-off days when road haulage was so different to the business it is today.

Usually, the trucks they renovate aren’t ones they owned, merely a like-for-like replacement that fulfils a desire to honour their working past. But this one’s different; HAF 664L was bought new by Dennis Oates, way back in 1973.

All those years ago, the truck cost £4,200 to put on the road, which was quite expensive at time, compared with other models. Oates was only the third company in Cornwall to have an F88, and the truck was driven by Fred Preston for many years. 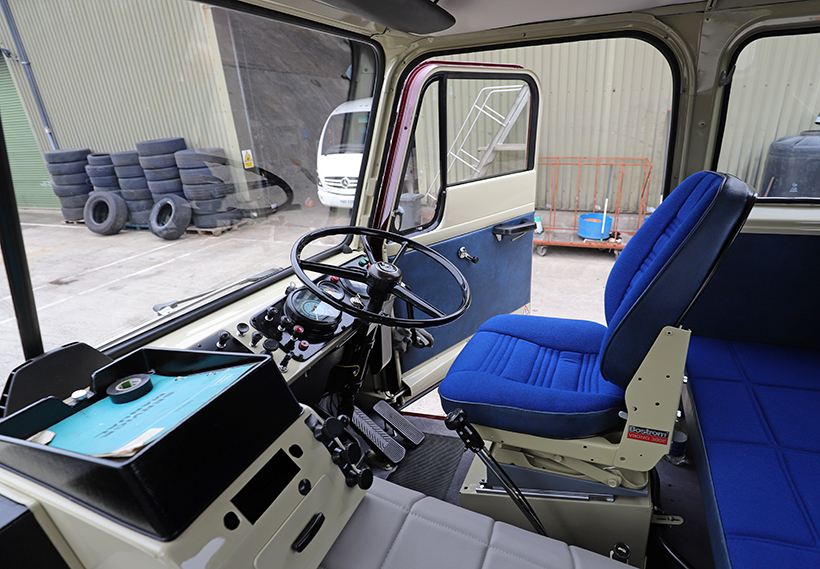 Inside, the restoration is immaculate as well.

“But it was eventually retried and stored until we started a complete refurbishment, which included a full interior re-trim. We started restoring it about 20 years ago, but that stalled due to work commitments, and we did re-start again in earnest until two years ago.” The driving force behind the project is Dennis’s son, also called Dennis, and his son Daniel, who is 33 and a driver for the firm.

Helping hands
Not all the work was done by the brothers, as the truck was sent away to Rob Crawford, in Bodmin, for the chassis to be shot-blasted and the engine to be rebuilt. A professional paint sprayer was also used to return the truck to its original colours. Rob is a local RNLI engineer, whose dad drove an F88 back in the day, and he wanted a project to get his teeth into. He did most of chassis work, the axles and the running gear. Also involved was David Vokins, a local fitter.

Daniel explains: “Sourcing parts hasn’t been too bad, we had a lot of parts already in the yard, but a few parts needed to be made. We still had a set of F88 badges, new and in their original packaging!”

The new replacement cab cost £5,000, and was bought in an auction in Selby, but it was just that – new – it had never been used. Its brown upholstery still had the protective cellophane on it!

The restoration was thorough, but not painstaking and, once complete, the big Volvo was taken to the St Beryan rally. “We may go to other shows, and I’d like to take it to the Retro Truck Show one day, but it’s a long way to go anywhere when you live in Penzance!” 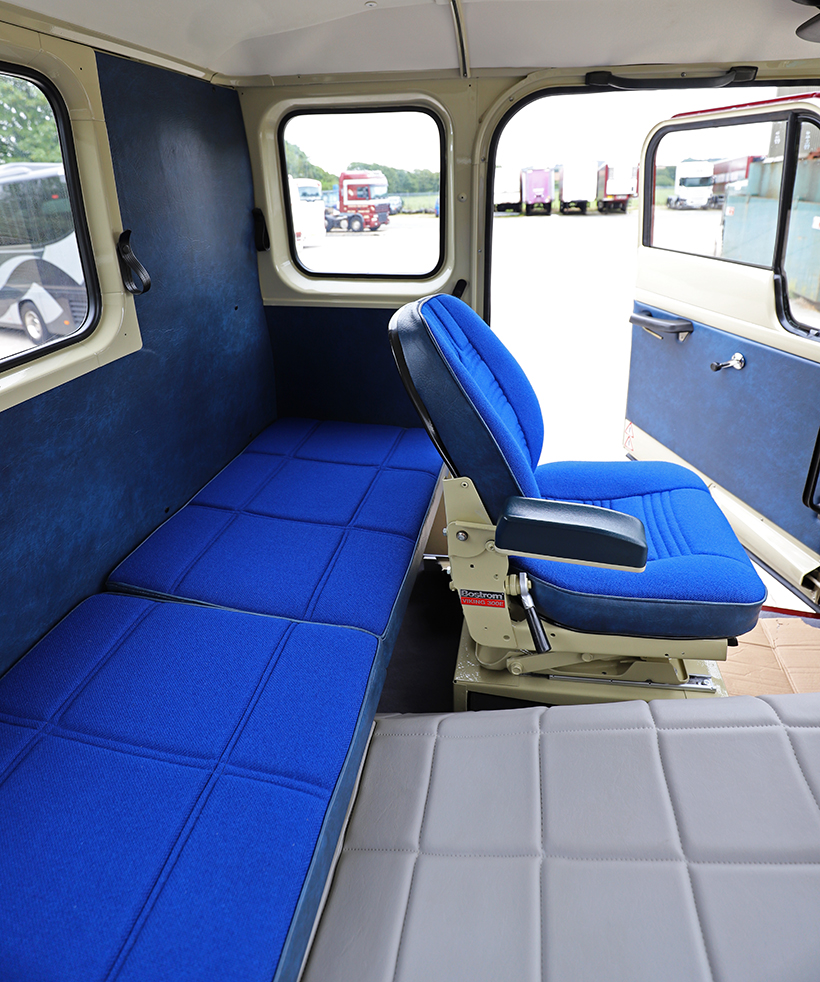 There’s not a great deal of room in an F88 by modern standards but, back in the day, it was regarded as a veritable palace!

The F88 is taxed and insured as a classic truck and cab for road use. It was bought new from Harry Dando in Bristol, in 1973; Dando’s dealership gaining fame in the early 1980s when it became the first – and only – dealer to sell Kenworths to UK customers.

The truck’s had a few scrapes in its time, it rolled over on a roundabout in Exeter once, which damaged the chassis – it required straightening. In its later years of active life, HAF 664L was kept more on local work in Cornwall and Devon, until it was finally retried and stored

An established firm
Dennis Oates set up the company in June 1961, with a single Commer Q4 tipper truck. The fleet steadily grew, reaching a maximum of 14 trucks at one point, but dropped back down to the seven it now operates. It moved its base to Penzance in the 1980s, but the old F88 has the original location of St Ives, five miles up the road, meticulously replicated on its doors. The signwriting for the truck was all done by hand, by the same painter who does Andrew Newport’s fleet!

The fleet was originally painted in British racing green, but that changed to the maroon and silver livery in 1969. Oates has covered all of Europe with its fleet over the years, and now mainly operates fridge trailers in the UK and abroad.

In the shed are three old trucks from those days – two Scania R142 tag axle tractors; D101 NCV and B43 BAF, and a mid-lift 143 Streamline/Topline N100 GOT. They’re all in need of some TLC, and are covered in cobwebs, but they’re dry, undercover and still start. To prove the point, Dennis fired up the oldest of the trio for me, and it started first time. All three of these iconic V8s will be restored or sold. 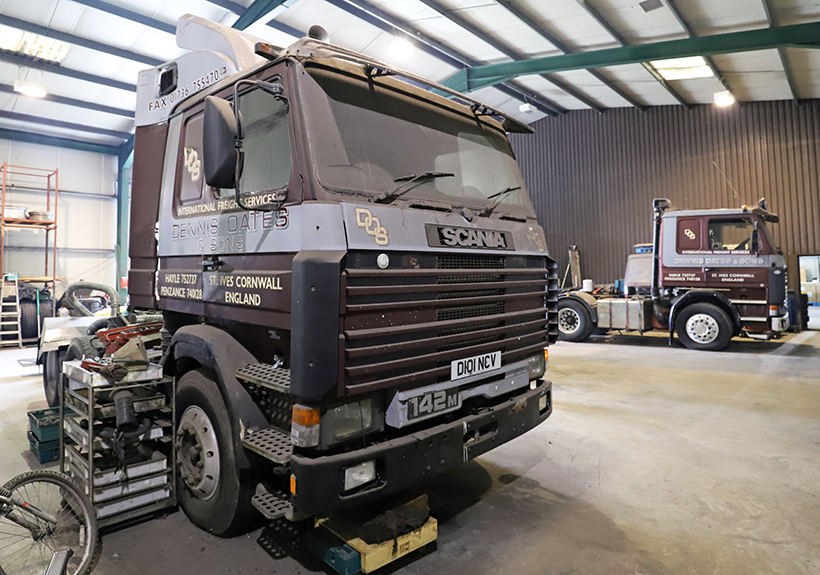 Inside the shed are three Scanias awaiting restoration, including these two R142s.

The firm today is still running Scanias and Volvos and, during my visit, the flagship of the fleet – an 18-plate S580 V8 – arrived back in the yard, so I couldn’t resist lining it up with the F88 for a photograph. Both top-of-the-range motors in their respective days, the evolution of truck cab design is there for all to see. So anyone who says ‘give me the F88 any day’ is a liar! For one trip down the road, for old time’s sake, perhaps. But, as a day-in, day-out tool, any driver should take the Scania! 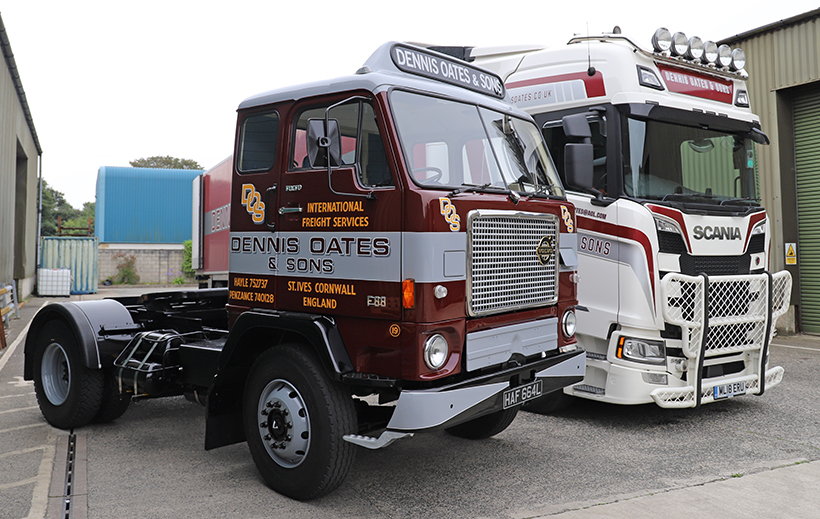 Dennis Oates is still in business, and his 18-plate Scania S580, when parked next to the F88, demonstrates just how much trucks have evolved in 45 years.

A perfect truck!
I’ve seen many F88s in my time, I remember them when they were common on the road. But I’ll come clean; there aren’t as many as original in appearance, or as perfectly restored as this example. Like any old truck, it’s a bit smoky when it is fired up, and it takes a while to get the air up to move it. But, once we got it outside for photographs, it was obvious just how perfect it is. It’s immaculate from top to bottom. Daniel even tilted the cab to show me the engine – also immaculate – as further proof of what an amazing restoration has been undertaken on it. 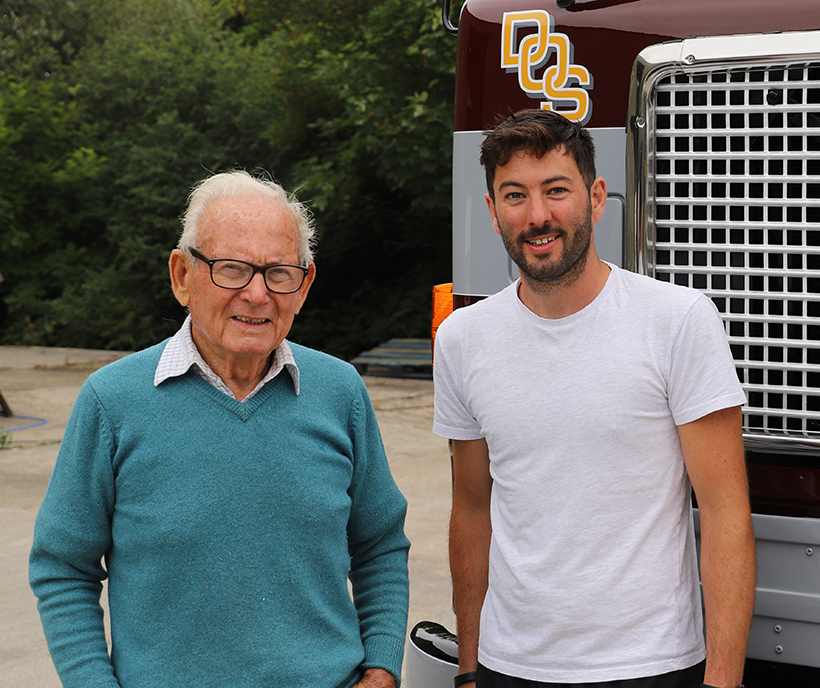 Dennis Oates is now 90, but his grandson, Daniel – a driver for the firm – is now heavily involved with looking after the F88.

Its only problem is that its location prevents it from being shown off as much as it should be; Penzance is 80 miles from the River Tamar. So taking it somewhere like Gaydon or Peterborough would be a long old haul of a day, result in a 600-700 round trip.

But, as an authentic replication of an original truck from the 1970s, I’d certainly struggle to find a better F88. It’s not only original, it’s authentic. The livery is correct, the phone numbers are right and the interior is smart. There’s nothing extra on it that shouldn’t be there and, in short, it’s as good as you could ever wish to get! 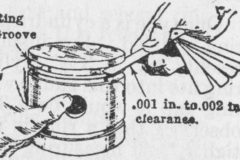 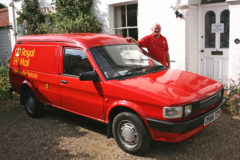