James Hamilton was invited to witness Fowler road loco, Lord Roberts, being sent back to barracks as it returned to one of its old working haunts. 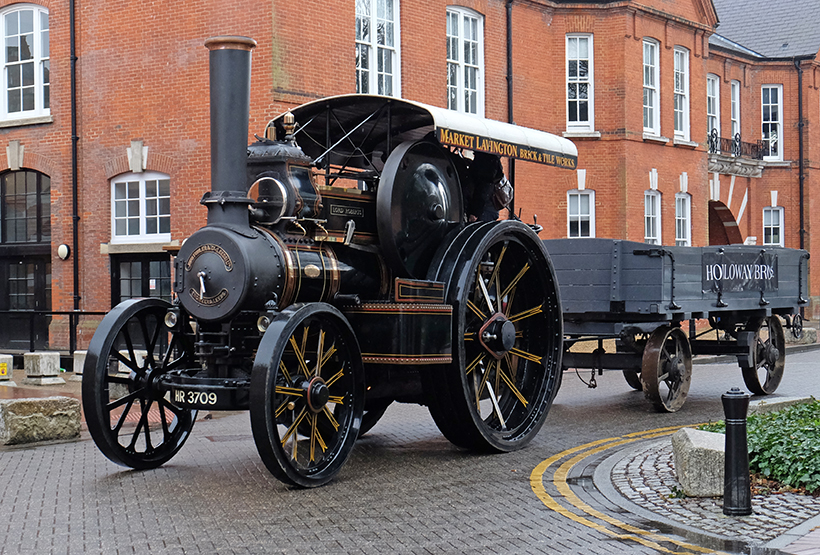 Back to barracks! Lord Roberts returns to the Royal Naval Barracks in Chatham, Kent, a site where the same engine worked some 118 years ago.

In 1901, Holloway Bros, a firm of building contractors based at the Brick & Tile Works, Market Lavington, Wiltshire, took delivery of Fowler B5 8nhp road locomotive No 8903, of 1900.

Holloway Bros was very successful. With one brother established in London, the company secured some major building contracts. The Fowler, along with three traction wagons was, for the following 21 years, used by the company to transport building materials from Market Lavington to the sites of its many building contracts. 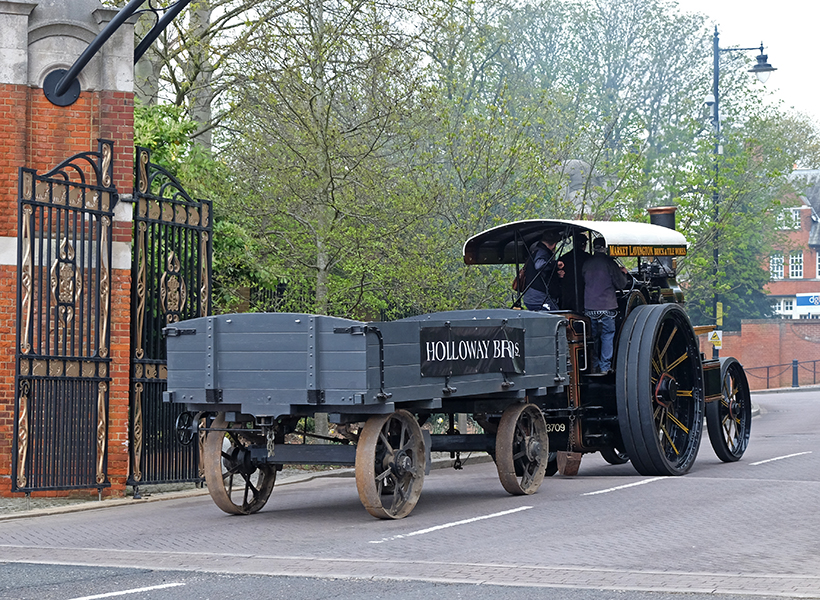 The Fowler survived into preservation and, in 1963, was acquired by Tom Paisley of Hollywell, Cambridgeshire, where it joined his collection of engines. It was during the time in his ownership that it acquired the name Lord Roberts. Since the Paisley dispersal sale in 1980 following his death, Lord Roberts has received a complete restoration to a very high standard, and is now owned by Stephen Cotton who, while living and working in Berlin, continues to keep the engine in Sussex.

Working research
Stephen has done much research into the working life of No 8903, particularly the time when it was owned by Holloway Bros. Something he’s keen to do is return the engine to locations where it’s likely to have been used, as a way of reconnecting the engine with its working past. 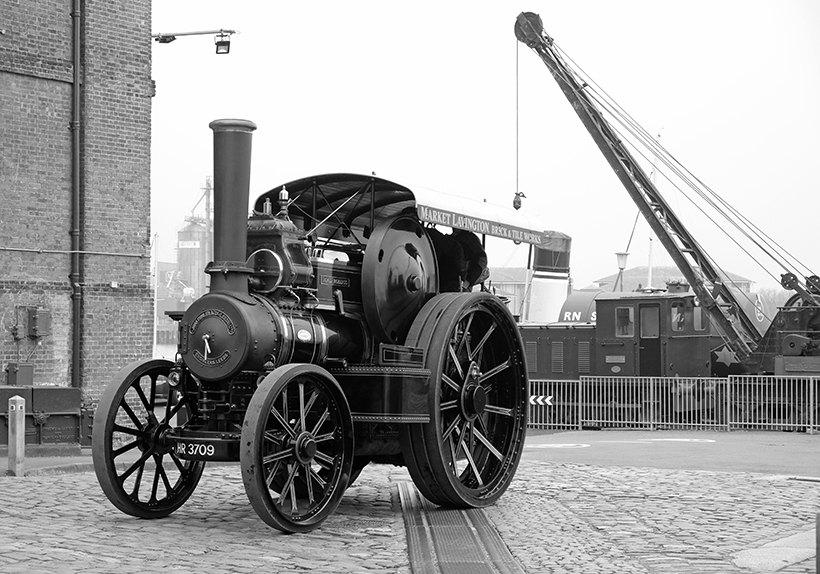 At the Chatham dockyard railway.

This year he decided to visit the site of what was possibly the largest contract that Holloway Bros. undertook, at the Royal Naval Barracks in Chatham, Kent. Built over a five-year period – from 1897 to 1902 – the Fowler would have been involved with the later developments of what is a vast and highly impressive complex.

Built to accommodate 4,600 naval personnel, the barracks cost the equivalent of nearly £49m in today’s money, and was used by the Navy up until 1984. Today the site provides a combined campus for three universities.

The grandest of the buildings, ‘Pembroke’, built for the officers, retains much of its original interior, including a magnificent oak stairway in the entrance hall that’s panelled in finely-carved wooden reliefs depicting nautical scenes. There are three sets of steps to the main front door, the central one is gated and reserved for use only by Her Majesty the Queen. 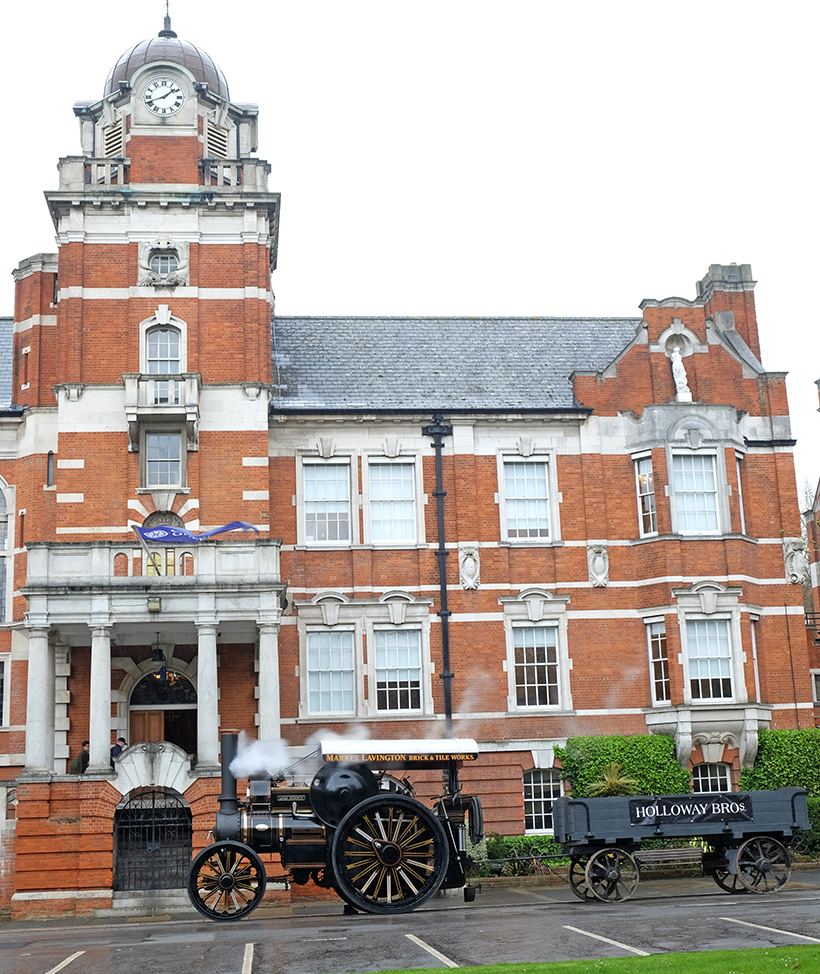 At ‘Pembroke’, on Officers Road in Chatham.

Stephen liaised with the university via Richard Cottam, to arrange a visit with the Fowler on April 2nd, so that it could be positioned at a number of locations, including the Central Avenue, the Drill Hall and Parade Ground, and in front of Pembroke. It was requested – and kindly arranged – so that the front of that the front of ‘Pembroke’ was helpfully kept clear of cars for the day.

Cul-de-sac conundrum!
Unfortunately, the same couldn’t be arranged for the Parade Ground, which acts as the main university car park. As a result, Stephen inadvertently drove the engine into a cul-de-sac of parked cars. Given that the engine had the traction wagon in tow, the easiest option to solve the problem was to detach, perform a three-point turn with Lord Roberts, then shunt the wagon back out the way they had come. At the request of Richard Cottam, Lord Roberts also made a visit to the engineering department of the university, based in the Hawke Building, where it was well-received by students and lecturers. 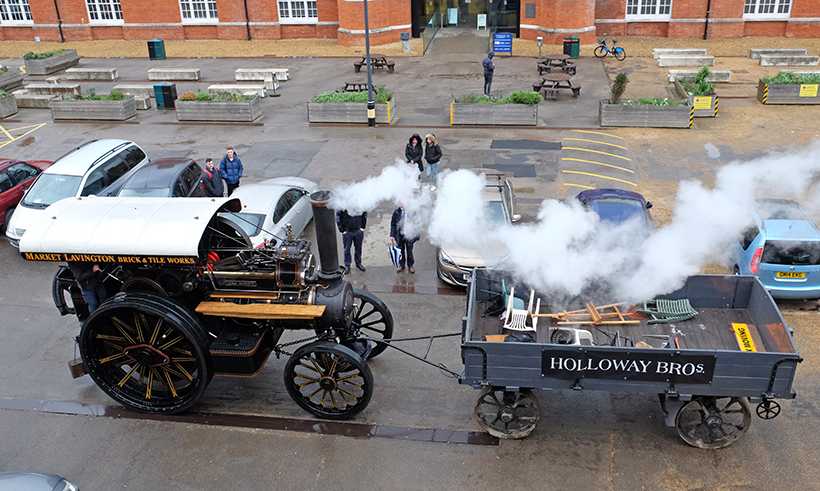 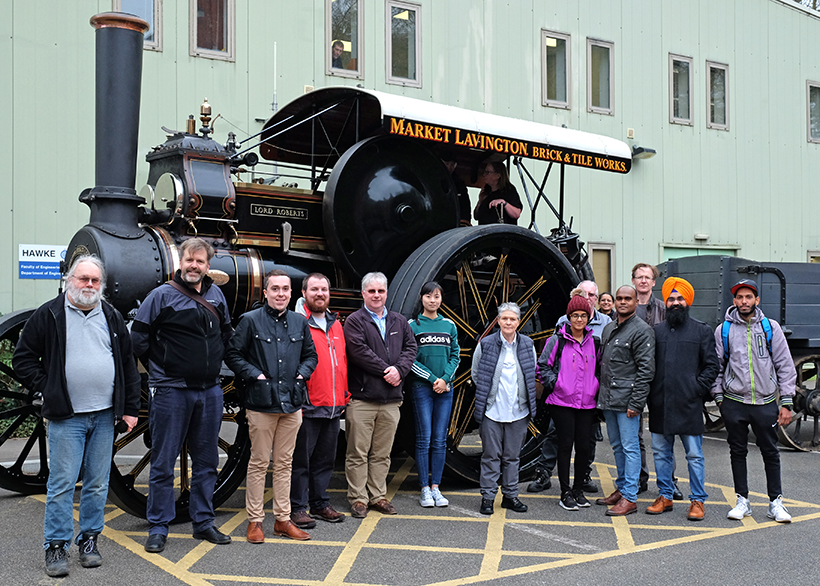 The ‘Hawke’ building, with students of the engineering department. This is now used as the Medway Campus for the University of Kent, University of Greenwich and Canterbury Christ Church universities.

Stephen was assisted on the day by Peter Denham, who had transported Lord Roberts to Chatham where, thanks to the co-operation of Chris Jones, head of engineering collections at the dockyard, the Fowler was kept before and after the barracks visit. 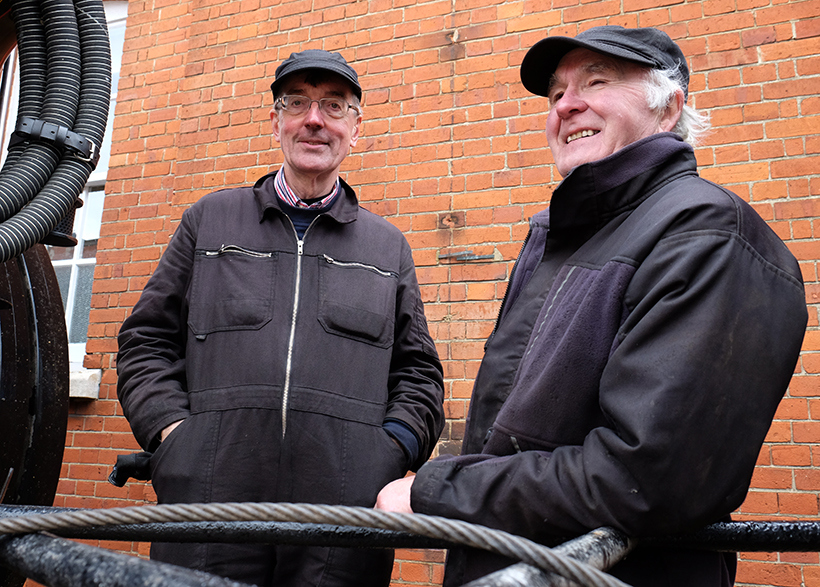 Before making the short journey to the Royal Naval Barracks from the Historic Dockyard, the opportunity was taken to drive Lord Roberts around the Dockyard, which was virtually free of visitors on a cold and damp Tuesday morning.

Stephen puts a great deal of time and effort into arranging the visits with Lord Roberts, and remains eternally grateful for the welcome and friendly assistance that he receives in his quest to re-connect the Fowler with its working past. These visits are intended to educate and hopefully inspire others who are involved with engines, to follow his example and discover more of the history of their own machines. 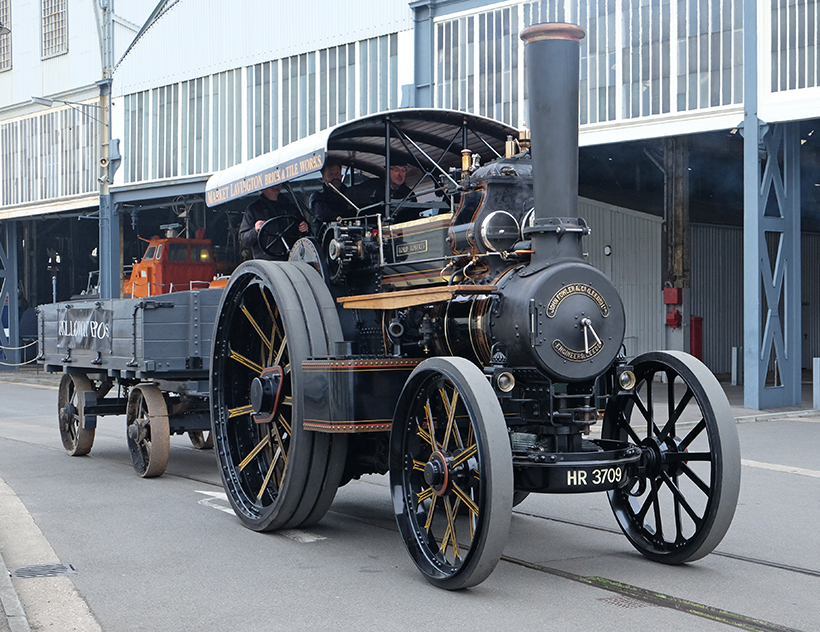 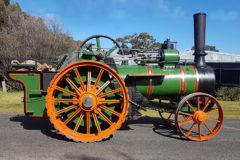 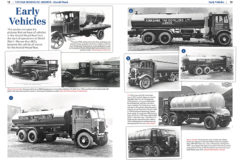