Peter Simpson is a big fan of the dual-purpose Hillman Husky, and spotlights one that’s been restored from chicken-shed condition! 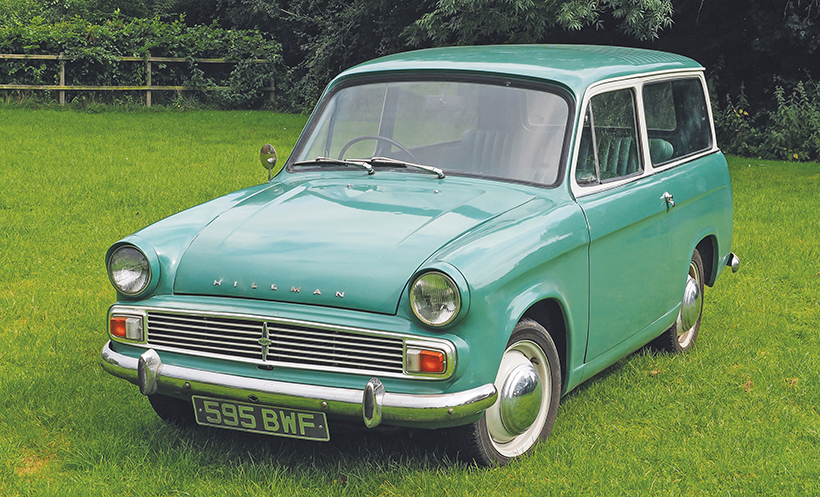 The dual-purpose Hillman Husky; before restoration, this one had been used as a chicken house!

Although many estate cars end their lives as rear-seats-permanently-down tradesman’s hacks, few are bought new with that sort of use in mind. Rather they’re generally chosen by relatively well-to-do folk as family transport, and with any commercial use as very much a secondary consideration.

Back in the 1950s and 1960s, however, the Rootes Group offered an alternative which basically turned all this on its head. It provided conventional estate cars based on the Minx saloon until 1962 and the larger Super Minx thereafter (and with the option of Singer-based versions for those wanting a bit more quality).

But, from 1954 to 1965 there was another option; a dual-purpose vehicle advertised as the ‘Double Duty’ Hillman Husky. ‘You pay for one car, but have the services of two,’ as the company’s marketing men put it. The Husky was effectively a Commer Cob van with Hillman branding, factory-fitted side windows and fold-down rear seat. It was intended to be a full commercial vehicle through the week, but one which could also – but really as a secondary consideration – be used as four-up family transport, perhaps at weekends. 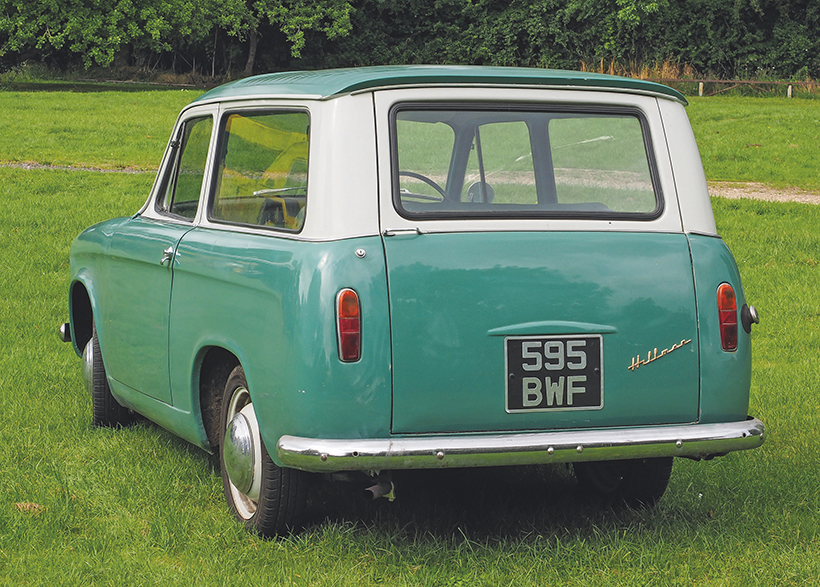 Rear door was hinged on the right for RHD Huskys, but on LHD versions the hinge was also on the left.

Inside it was pretty basic – rubber floor coverings, minimal sound insulation, the bare minimum of instrumentation and next to nothing in the way of creature comforts. In part, this was considered appropriate for the intended usage, but doing away with anything that wasn’t needed was necessary to keep the price down. Keen pricing was important for two reasons. The first, clearly, was to avoid any chance of competing with the other estates – the Husky had to appeal to a completely different market.

Additionally, the Husky was competing to some extent with home and aftermarket conversions of vans. At the time, cars attracted Purchase Tax, but vans did not. Converting a van into a car – the crucial thing here was fitting windows behind the front doors – made tax payable, but you didn’t generally know how much it would be until you’d done the conversion and asked the question. However, as the tax related to vehicle value, it was less on a used vehicle than a new one.

The Rootes Group’s thinking was that by offering, in effect, a ready-converted van, it were offering a simpler, easier and more cost-predictable way of achieving the same result, and one which didn’t risk invalidating the new-car warranty. It was, though, crucial to this that the price was competitive. 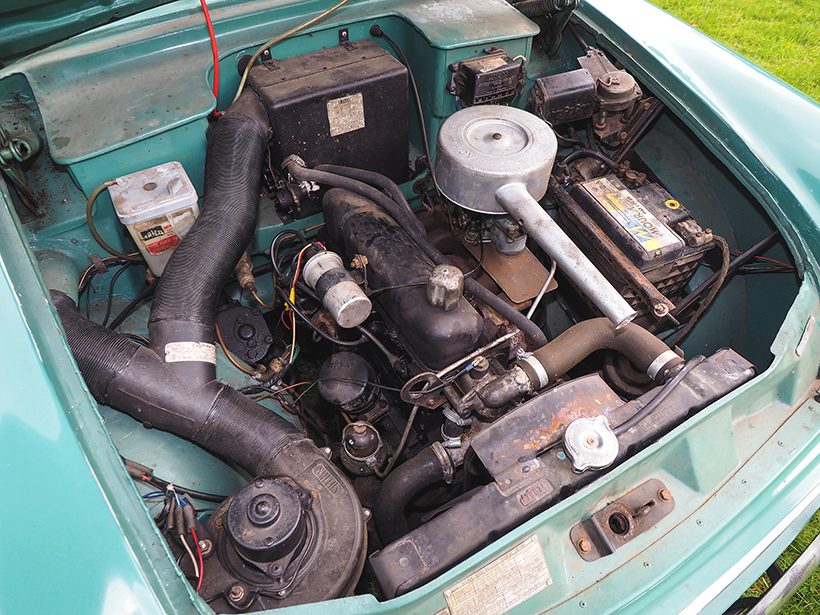 The Husky acquired an OHV engine in 1958, four years after the Hillman Minx. But, whereas the Minx engine capacity eventually reached 1,725cc, the Husky never got past its original 1,390.

The most noticeable way in which Rootes kept the Husky affordable and away from competing with other in-house products, was by keeping it slightly old-fashioned. Regular model updates (inspired by the Rootes Brothers sales and marketing background to ensure there was always something ‘new’ in the showroom), were a Rootes characteristic. But, while the Husky was updated, it was always a step or three behind the latest change.

For example, although the ‘Audax’-styled Series Minx replaced the previous Mark model in 1956, the Husky retained the old shape until 1958, the same year as the Minx saloon received its second update. More significantly, it also retained the old sidevalve engine until 1958, despite the car having acquired the ‘new’ 1,390cc OHV in 1954 – the same year as the Husky was launched.

After that, although the OHV engine capacity in the cars was increased progressively to 1,494, 1,592 and, after the Husky discontinued, 1,725cc, the Husky never progressed beyond its original 1,390cc, though minor changes did improve power output marginally. 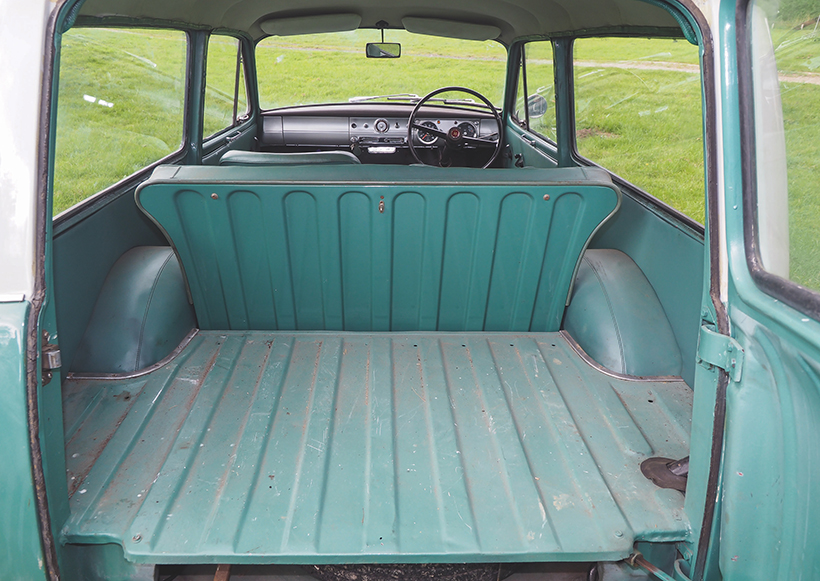 The Husky’s interior is pretty basic – to put it mildly!

Both Huskys were based on a shortened Minx estate floorpan – Mark Minx until 1958, Series thereafter. The Series I Husky broadly matched the entry level Special spec of the Series II Minx, but later the same year that was replaced by the Series IIIa. Then, in March 1960, the Series II Husky arrived, shortly before the Minx received its 4th (IIIb) upgrade. Better seating, a lower roofline and a revised radiator grille were the main changes.

This model remained almost unchanged for three years (a very long time in the world of Rootes), until August 1963 when the Series III Minx arrived and, somewhat surprisingly, received the same revised front-end as the Series V Minx, introduced at the same time. The cynical might suggest this was more about simplifying production than any great desire for an upgrade though, with the Minx estate option now based on the significantly larger Super Minx shell, there was probably less need to differentiate between the Minx and Husky, anyway.

At the this point, the Minx was given 13in wheels, but the Husky retained 15in ones and, as already noted, it still had only 1,390cc under the bonnet. Finally, in September 1964, the Husky received an all-synchromesh gearbox and diaphragm-type clutch, plus a front anti-roll bar. Production finally ended at the end of 1965. 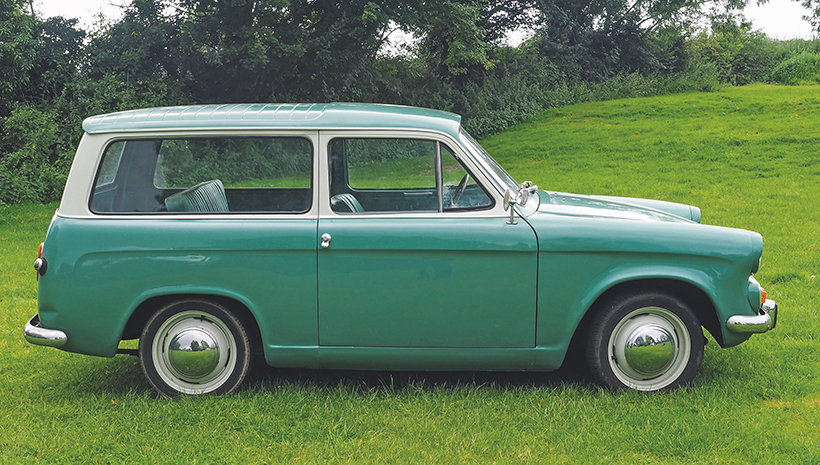 The Hillman Husky retained 15in wheels, even after the Minx changed to 13s in 1963.

However, that wasn’t quite the end of the Husky story as, 14 months later, in April 1967, a new Husky – this time based on the rear-engined Hillman Imp – was introduced. Like the previous Husky, this was produced alongside a Commer Cob panel van version. Neither was a massive success, however; under the load floor isn’t the ideal place for a commercial vehicle engine, especially on a vehicle with well-documented reliability issues and, following William Rootes’ death in 1964, the wheels were starting to come the once-great Rootes Group anyway. The Imp-based Husky was discontinued in September 1970, with LG 482 602747 the final chassis number.

Over in the heart of rural Norfolk, Neal and Nigel Davis have something of an eclectic collection of old vehicles of various makes and types, some of which we’ve featured in CVC in the past. There have also been a few interesting additions, which we’ll be looking at over the next few months. Both, however, have something of a liking for Rootes Group products, so when Nigel saw a Husky ‘restoration project’ on an online auction site a few years back, he decided to put in a bid. Nigel’s 1964 Series III Husky had had just two previous owners. Thanks to the ever-helpful Rootes Archive Centre, Nigel knows that his Husky was supplied new, by Bridlington Rootes dealership, Appleton Associates, to a Miss Edna Bogg. From her, it passed to a farmer based near Driffield. Here it seems to have followed a pretty typical farm vehicle’s life-cycle, starting off as an everyday, on-the-road car, then being progressively demoted to part-road, part-field hack, then to entirely off-road farm use. Finally, when no longer able to move under its own power, it was used as a chicken shed! In its life, it had also picked up some pretty typical farmyard bodywork repairs, including rough welded repair sections over the rear of the front wings.

When bought by Nigel, it had been out of use for many years and looked far-from good as a restoration prospect. But, under all the grime and you-know-what from the chickens, the basic shell looked sound and restorable. Replacement body panels for vehicles like this just aren’t available and, while repair sections can be bought for common-rot areas such as the rear wing trailing edges, in this case the rot here was too advanced. So Nigel made and fitted his own sections. One or two were also needed elsewhere. 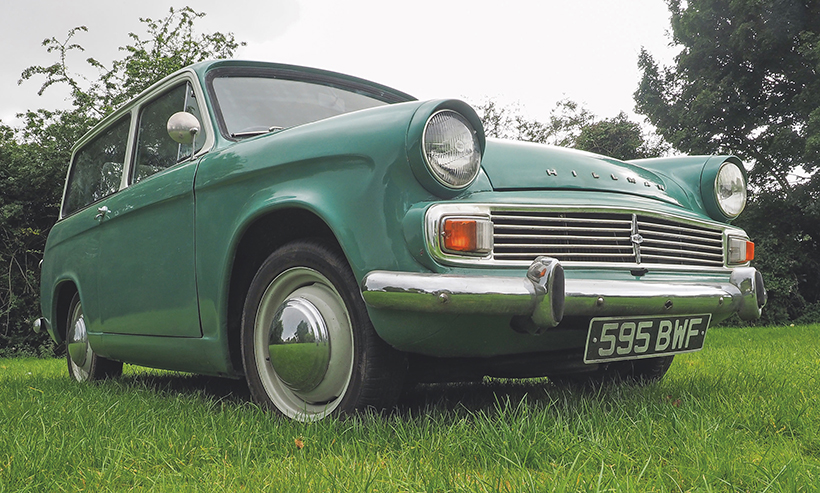 As the Husky had been out of use since goodness-knows-when, (and someone had ‘borrowed’, but not returned, a couple of spark plugs), the engine had seized solid. However, amazingly, Nigel knew of an extremely rusty Husky sitting in a local scrapyard, and this donated not just a replacement engine but also a better headlining! These, along with a few other parts were fitted, though much of the original interior cleaned up surprisingly well. As part of the restoration, Nigel also went right through the steering and braking system, renewing anything that needed doing.  He also repainted the Husky himself – at this point we should perhaps point out that he is a retired, self-employed motor mechanic who ran his own car repair business in Clacton for many years.

The finished vehicle is not – and not intended to be – a concours or show-standard restoration, though it has been exhibited at a number of local events since completion in 2014. Rather, it’s a recreation of a typical five- or six-year-old Husky as so many of us remember them; a vehicle that could and would be used for all manner of work through the week, but could also be cleaned up to take the family out at the weekend.

This is not, though, the only Husky in the Davis ‘collection’. Besides liking old vehicles, both brothers have a fascination with doing slightly unusual things with some of their vehicles, and the other one certainly fits that description. From first glance one can see that their 1970 Imp-based Husky is a wee bit different, though the wide wheels etc, are actually pretty typical of what many enthusiasts did in the 1970s. However, when you look in the back, you see not a Coventry-Climax-derived 875cc alloy engine, but a 2.5-litre, flat-four Subaru unit!

This conversion is, as you would expect, a very interesting one from a driving point of view, but it’s 100% road legal. However, the installation isn’t particularly satisfactory; low ground clearance is something of an issue. The brothers are therefore considering alternatives – at present they are thinking about a Wankel rotary of some kind, possibly even an NSU Ro80 unit.

Oh, I almost forgot; I mentioned earlier that the (non-Imp) Huskies were based on a shortened Hillman Minx estate floorpan. That pan was also used on another Rootes range which is just about as different from the Husky as it’s possible to imagine. I’m talking about the Sunbeam Alpine sports car and, of course, its mega-high performance Tiger cousin. And guess who’s got a Tiger, as well as a Husky? 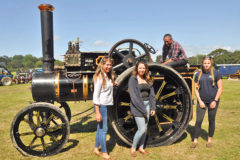