Bob Weir went to the Clyde Valley, near Glasgow, to meet Bill Orr, and his Massey Ferguson 2135 Industrial. 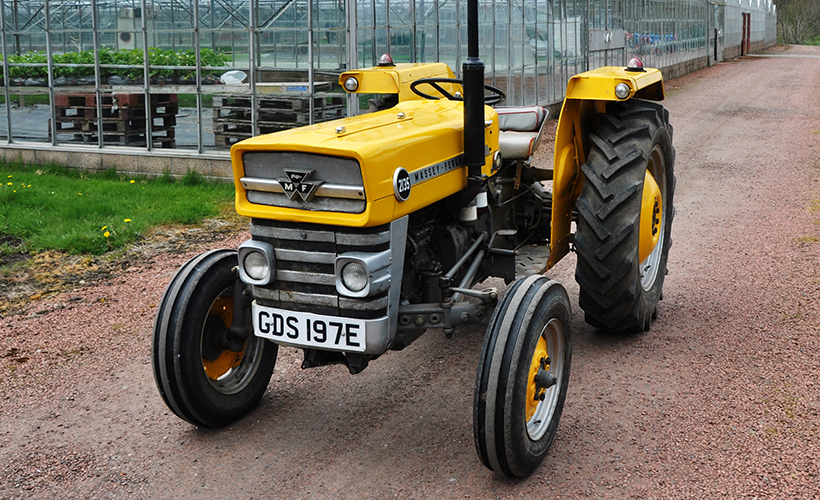 Massey Ferguson 2135 Industrial: The familiar shape of the MF 135 made it one of the most popular tractors in farming history. Industrial examples like this one are now quite rare in Scotland.

Bill Orr lives near Crossford, just a short distance from Glasgow. Despite being located next to some of Scotland’s largest towns, the area is a green oasis in an industrial landscape. The family’s plant nursery is situated in the middle of superb countryside, just a stone’s throw from historic Craignethan castle.

Bill was brought up in the Clyde Valley area, and has lived there all his life, as he explained. “My family lived at Waygateshaw Farm, just across the valley in Carluke. It was originally rented, but my parents managed to buy the 120-acre property in the 1950s. In addition, they rented another 40 acres.”

Farming roots
“They kept a dairy herd for many years, before reverting to beef cattle, and my brother and nephew are still looking after the place. Like a lot of farmers in the area, my father had been working with horses up until the time I left school. Then he bought his first tractor, a petrol/paraffin grey Fergie, but eventually changed that for a diesel-powered TEF.” 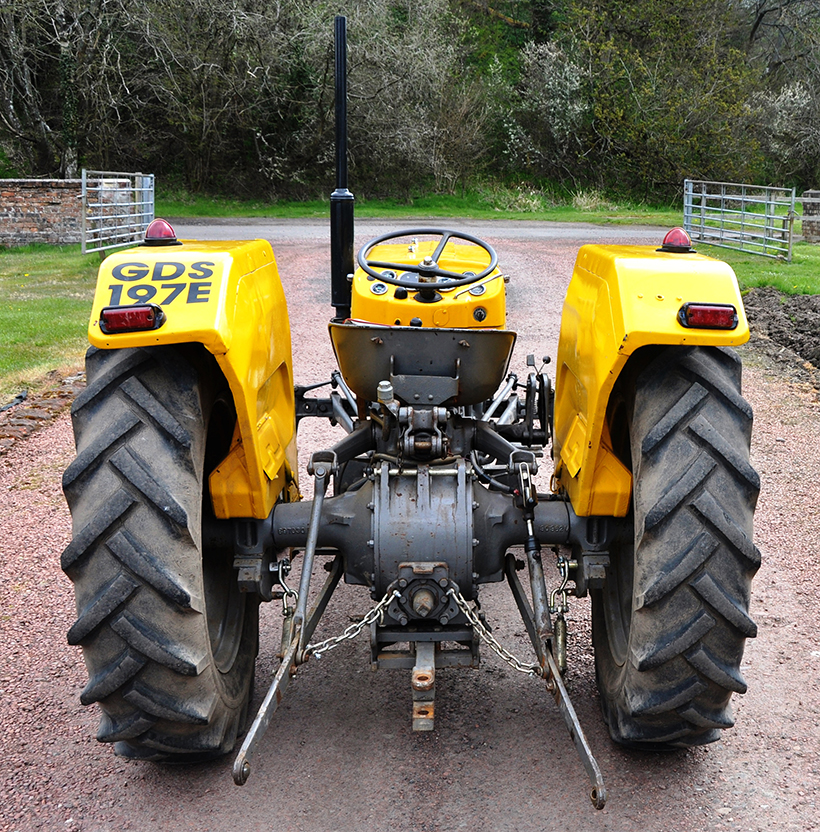 The Industrial version was very similar to the farm model, with the addition of a few extras to make the machine more road-friendly.

But Bill wasn’t really interested in dairy farming, so got a job driving JCBs instead. “Looking back, I was more mechanically minded,” he recalls. “The JCB came about in 1965, when I was doing a friend a favour. He owned a Fordson Major fitted with a JCB loader, and needed a driver. I was only supposed to be helping him for a couple of days, but ended up staying for eight years!

“By that stage, I was married and had a place of my own. Then, when my wife’s grandfather died in 1974, we moved down to Crossford. I was still working with JCBs and driving trucks but, after a couple of years, my wife’s parents asked us both to help with the business.

“The plant nursery was originally acquired by my wife’s grandfather in the early 1920s, from the Duke of Hamilton’s estate. In the early days – around the time of the Great War – they rented the property, before buying it outright. Back then, the family was growing strawberries and other fruit. They used to sell the produce to markets in Edinburgh and Glasgow, and some of it also went by train as far south as England. They even operated their own canning factory, but all that’s long gone. By the time I joined the business, we were growing mostly tomatoes.” 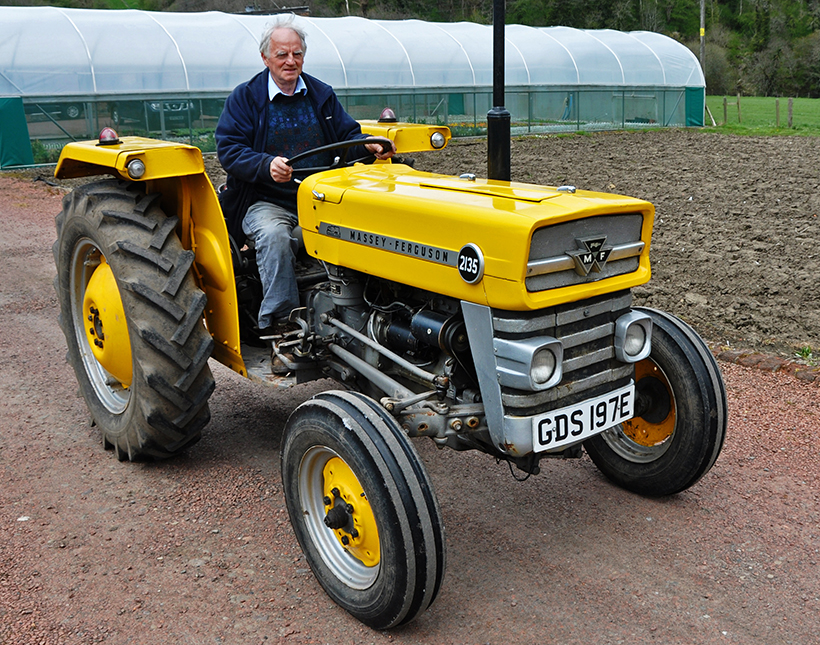 Growing decline
“At its peak, we had two-and-a-half acres under glass. Then the market went into decline following the introduction of ‘pick your own’. It was also getting harder to compete with foreign growers from the likes of Spain and Holland, and we were forced to cut back because of the heating costs. We eventually moved into bedding plants in 1985, although we still grow a small number of vegetables. Things are certainly not getting any easier, as there are a lot of garden centres in the area. We supply a few of these and also sell a lot of plants on site. We’re currently doing a bit of everything to appeal to as wide a market as possible.”

Bill has been involved with tractors all his life and, when they took over the business, he inherited the family’s Grey Fergie. “My wife’s grandfather had bought the tractor from new.” He explained. “The Fergie was originally a petrol model, but he converted it to a P3-powered machine sometime during the 1950s.

“By the time I came here in the 1970s, that tractor was no longer a runner, and evidently needed plenty of work. So I decided to restore it, as a spare-time project. Like a lot of my generation, I’d learned most of my mechanical skills on the job. I stripped the engine, and renewed most of the parts. Working on the Fergie also sparked my interest in old tractors. I still have the P3, and take it for a spin now and again.” 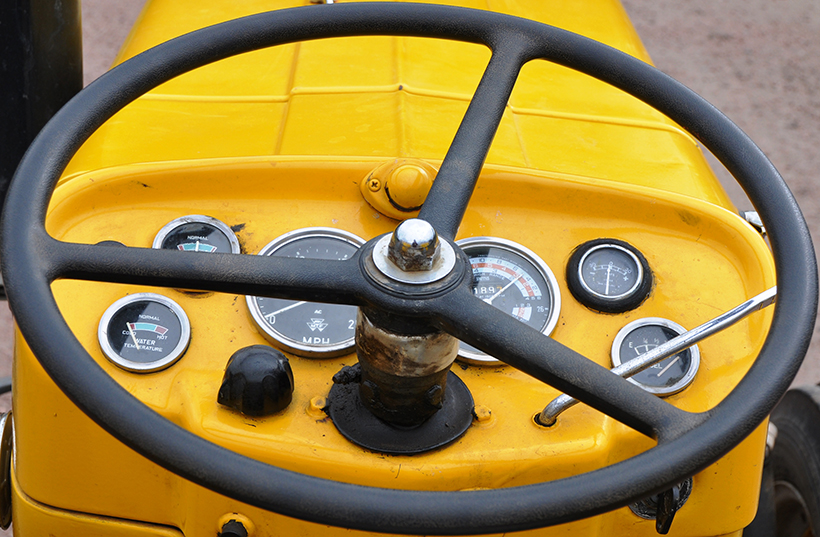 A familiar sight to many tractor drivers during the 1960s. Note the addition of the speedometer.

Interest in tractors
Bill and his son, Jimmy, have acquired several makes of tractors over the years. These include a couple of Fordsons, an International B-250, a Caterpillar D2 and Jimmy’s superb collection of early John Deere tractors. But Bill has always had a soft spot for Massey Ferguson and, in addition to the 2135 featured here, owns an MF 135 from the same era.

He said: “The 135, registration CDS 35E, was originally new to Kirkton Muir Farm at Eaglesham. It was then moved on, three months later in 1968, to my uncle Guy Ross in Strathavan, who used it on his farm until he retired. When I got the tractor, it was in good condition, and I’ve used it on road runs and ploughing matches since.”

Ploughing matches are keenly contested in this part of the world, but Bill assured me that he’s capable of holding his own. “Fortunately, when I was young, I picked up a lot of tips from a ploughman contractor, and this experience has stood me in good stead,” he explained.

The 2135 is a recent addition to the family stable, and used to belong to his close friend, John Foley. Bill was already familiar with the machine as it was stored at Crossford for many years. 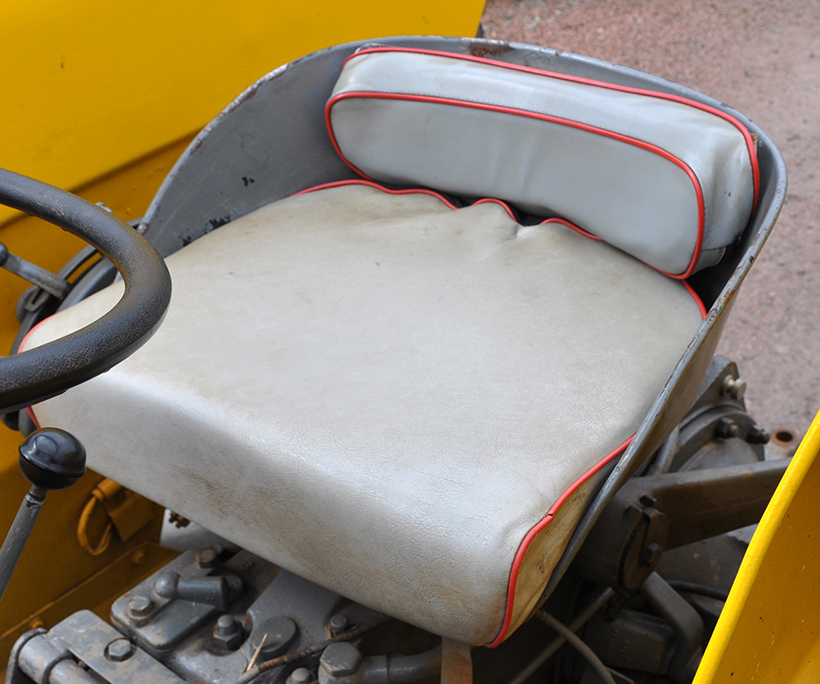 “Before he bought the Massey, he used to borrow one of my tractors to go ploughing,” said Bill, who is a member of the Avon Valley Vintage Power Club. “Then, in 2009, he decided to get a machine of his own. He saw one advertised in a tractor magazine and took it from there. Unfortunately, John’s health deteriorated in 2012, so he decided to dispose of his tractor and plough. As the Massey was being stored on my premises anyway, I bought it, and John gave my son Jimmy the plough as a present.”

Industrial spec
The MF 2135 industrial had basically the same specification as the MF 135, with a few minor exceptions. The tractor was fitted with a speedometer and horn, as well as a different type of power steering, plus a heavier, non-adjustable front axle. It also had an extra set of brake shoes for the hand brake. These were independent, as the tractor spent a lot of time on the road. The Massey could be ordered with either diesel or petrol engines supplied by Perkins or Continental. The 2135 was also available as a ‘Turf Special’, and was a popular machine for working on golf courses. The tractor was also capable of using Massey Ferguson type 100 and 212 loaders.

According to Bill, the original owner lived near Buxton, in Derbyshire, and the 1967 tractor was mostly used for cutting grass. The Massey was in good condition when he acquired it, and hasn’t been restored. It’s been taken to several shows, and used on club road runs.

There was plenty of power (42hp) delivered by one of the most popular Perkins engines of all time.

He said: “Industrial tractors of this period are quite rare up in Scotland, probably because most of them led a hard life. The family occasionally takes it to rallies, which always makes for an enjoyable day out.”

Market gardening in the Clyde Valley
The Clyde Valley, between Lanark and the southern outskirts of Glasgow, has a well-earned reputation for its fruit- and vegetable-growing. This can be attributed to the combination of the shelter offered by the enclosing valley sides, moderate rainfall and well-drained alluvial soils.

There are records of fruit orchards dating eight back to the fifth century and, in more recent times, the industry was promoted by the valley’s proximity to several important country estates. These included Dalziel House, Lee Castle, Hamilton Palace and Chatelherault.

Bill’s collection of old, Massey Ferguson veterans. The P3 has been in the family since it was new.

By the beginning of the nineteenth century, orchard growing was in full swing, particularly on the north bank of the river. This was to take advantage of the southern exposure. The situation is reversed today, with the majority of holdings being located on the south side. The industry continued to grow into the twentieth century, with apples and gooseberries being the main commercial crops. The area also acquired a well-earned reputation for its strawberries and Victoria plums.

The industry peaked in the years leading up to the Great War. Fruit growing then went into steady decline, with the introduction of tomatoes grown in heated greenhouses. This was further aggravated by a lack of labour, and higher wage costs. The loss of fruit growing acreage was replaced instead by plant nurseries dependent on glasshouses.

Despite a long-term decline in the industry, the region is still known throughout Scotland as ‘the Garden Valley.’ There’s a distinctive character to the area, with glasshouses abounding and neat areas of intensive cultivation on the valley floor. Although fruit and vegetable production has had to take more of a back seat to bedding plants, garden centres play an important role in the local economy. 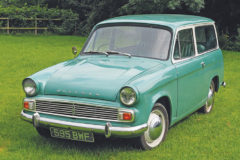 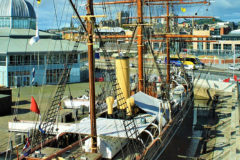