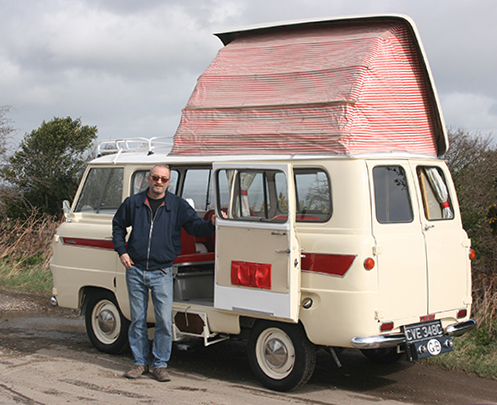 Ford Thames 400E Dormobile and its proud owner/restorer. The current colour scheme is a reversal of the red with white stripe it was bought with, but is a ‘genuine’ Dormobile scheme and, we think, it looks a lot better for it…

Peter Bridger, the owner and restorer of this superb Ford Thames 400E dormobile, has been ‘into’ classic cars for most of his adult life. His 1967 Mini Cooper ‘lookalike’ has had a regular presence on the Mini scene for many years, and “before they became expensive” he owned a number of Lancia Fulvias.

Vans, however, have also always been a ‘sub-interest’. His very first car, bought in his final year at school, was a Reliant Supervan; chosen because he’d started out with motorbikes, but ‘parental pressure’ encouraged a car purchase and at that time anyone, of any age, could drive a three-wheeler on a full motorcycle licence.

A classic camper, however, always on his radar. Unlike so many, however, he has never really wanted a VW, even when prices were sensible; “they aren’t actually that good.” However, when a 1965 400E Martin Walter Dormobile turned up at Mathewsons Classic Car Auctions in North Yorkshire last year, he ‘noticed’ it.

Then, after it had been through the sale twice but failed to sell, he noticed it a little more…

On enquiring, he was told that the vehicle had been sold previously by Mathewsons; the previous year to a gentlemen who had intended carrying out the restoration that the camper needed, but due to family illness had been unable to do so; he hadn’t even been able to make a start, and the van was therefore back on the market. Anyway, Peter was sufficiently interested to take a long trip up north from his base on the East Sussex coast, for a look. He agreed to buy, and the 400E Dormobile followed him back home, on a transporter, a few days later. 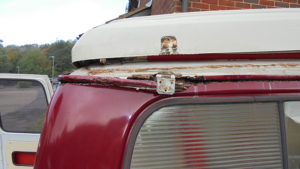 Severe corrosion around the roof guttering, resulting in a not-especially secure elevating roof!

When bought, the Dormobile was, it would be fair to say, ‘good in parts.’ Specifically, the sides – a very common weak spot – were good.  There was, though, the usual rot in the cab floor and around the front, but the main issue was that the guttering was in extremely poor condition. Inside the van, the original Dormobile seating was present, along with the complete and operational elevating roof. The interior was, though, a bit scruffy and worn all through, with the seat coverings being tatty and non-original. Some of the ‘furniture’ at the back was also was missing, and the floor-covering also needed renewing. 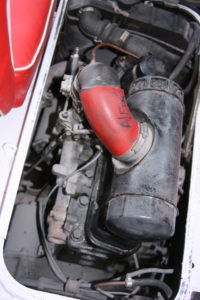 Engine access for servicing is far from brilliant; an oil filter change is especially tricky and, according to some, a two-man job!

On the mechanical side the van was running but the brakes were spongy, the engine pinked and overheated when worked hard and the characteristic 400E sloppy-when-worn gearchange was very much present. There was also a suspected charging fault.

So overall, a pretty mixed bag, but clearly a vehicle that was well worthy of restoration…

Back to front?
In two respects, this project was carried out the opposite way round to what most people do. First, whereas normally bodywork would be tackled before the interior and mechanicals, this time the interior came first. That’s because Peter and his partner Elaine wanted to use the 400E, for its intended purpose, at the Bodiam and Firle vintage events which take place in September and October. Accordingly, an interior ‘revamp’ was the first job on the list; bodywork could wait until the van went off the road for winter.

The second ‘back to front’ element concerns who did what. Overall, far more classic enthusiasts are happy dealing with mechanical matters than bodywork, and even fewer will tackle interior renovation. Peter, however, is happiest doing bodywork, as although most of his working life was spent in the building trade, prior to that he served a paintwork apprenticeship and spent two years as a working in the bodyshop of the local Ford dealership, leaving only when the business closed. Mechanical work, however, is something he has less interest in, and generally prefers leaving to others.

Trim work was also completely new, but here Peter decided that he quite fancied having a go – a decision made in part due to one specialist’s reluctance to even view the job for a quote. So he bought a secondhand semi-industrial sewing machine and then “after watching some how to do it videos on Youtube” set to work making a set of new seat covers. He describes this as a “steep learning curve” but as you can see, the results are excellent. 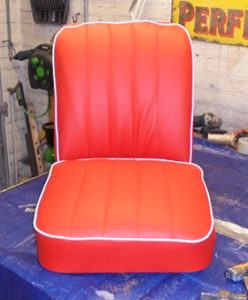 Though he had no experience of trim work, Peter made replacement seat covers himself, having taught himself the techniques by following Youtube videos

The original bases were sprung, but Peter has replaced these with foam – obtained from the local Dunelm – while the vinyl covering material was sourced from eBay shop Homeworld2004.  The seat frames were shot-blasted and repainted using “Hammerite from several rattle-cans”. Dunelm also supplied the material for the curtains, and the vinyl floor covering came from Carpetright.

The rear mounted wardrobe and ‘kitchen’ unit are both new-constructions by Peter. Both replicate the original external appearance, but as the Dormobile is to be used for accommodation at events, a modern sink and cooker are incorporated. On the other hand, as it won’t be ‘accommodating’ more than two people, the bunks within the elevating roof have been replaced with hammocks. These take up less space but can still be used for storage of items displaced when the van is in sleeping mode. 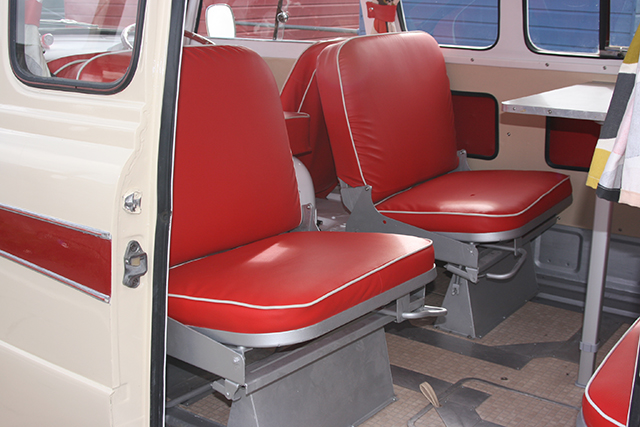 Most of the mechanical work was carried out by a local specialist named John Ainsworth; John is both interested in and experienced with classic vehicles. The brakes needed a full overhaul with new wheel cylinders and linings being sourced from various places online and via the 400E Owners Club.  Peter strongly recommends club membership; they have helped enormously, not just with parts but also shared knowhow. The club also supplied a carburettor overhaul kit, while the gear linkage was ‘improved dramatically’ by fitting new bushes all through, though some sloppiness in the 400E gearchange is something of a ‘they all do that sir’ issue…

The overheating turned out to be caused mainly by a clogged radiator which was re-cored by Maidstone-based Regal Radiators. The pinking, however, proved more elusive; fitting the correct spark plugs (Champion N5) improved matters, but eventually carefully resetting the ignition timing – with help sourced online and from club members – sorted it.

No major engine or gearbox work was needed beyond normal servicing. One welcome departure has, however, been made from standard specification; the infamous Ford vacuum wipers have been replaced by a two-speed electrical setup based on VW Beetle components. Finally, the ‘charging fault’ symptoms turned out to be caused by a lazy starter motor, and a motor rebuild cured it.

Body Restoration
The body restoration was carried out between October 2018 and February 2019. The uncharacteristically fine weather in South East England at the end of 2018 was a massive boon as much of the work had to be done on Peter’s driveway. His garage is, shall we say, ‘somewhat compact’. The main problem – and, we suspect, the thing that put many buyers off – was the roof guttering; in the event around three-quarters of it needed renewing. 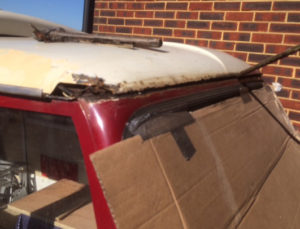 Guttering was repaired as required in sections

Peter repaired this in sections by first cutting away the affected area back to good metal and then making two replacement pieces – one for the top and one to go underneath which were spot-welded together on the outside; the original join was inside but Peter thinks this method, as well as being slightly easier, means there’s less of a moisture-trap and thus less risk of the problem recurring. Even so, work of this kind isn’t easy but an excellent job has been done with joins between sections visible. 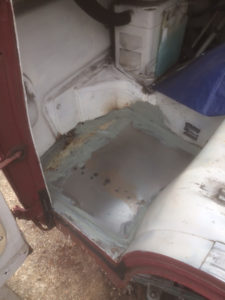 Cab floor needed repair, as is usual on these vehicles

Elsewhere, repair sections were made and let into the cab floor and a pair of front wheelarches made and fitted. Repair sections are available for some of these, but Peter chose to make his own due partly to longish lead-times but also because, as a skilled and experienced metalworker, he is more than capable of doing it himself. The rear wheelarches needed some repairs at the top, but the curved lower sections were good. Localised repairs were also needed to the front panel corners behind the front bumper; these are fairly complex due to the triple curves etc., involved in forming them.  Some localised chassis repairs were required along with one new outrigger.

When it came to painting, Peter clearly had no choice but to do it inside his garage, though even with the van hard over on one side there was less than 2ft clear space along the side. The job had to be done in two stages; with the van in nose-first he could paint the front and the nearside, then he turned it round to do the offside and the back. 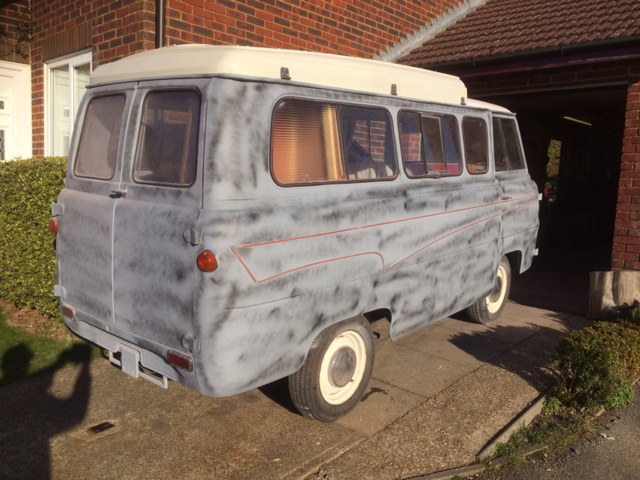 Prepping for a repaint in rather confined conditions!

That left fitting up and a few finishing touches to complete the job. New rubbers – again supplied by the 400E Club – were fitted to the rear doors. As Peter runs a business manufacturing and supplying period-style roof racks for classic cars, it’s no surprise that one of these now sits on the front of his Dormobile’s roof, with the name ‘Tess’ on a plate on the front. 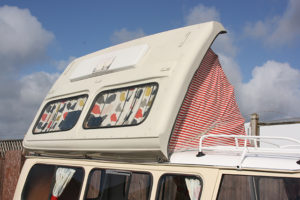 Elevating roof remains substantially ‘as bought’ and could well be original

Oh, and a strip of solar-powered LED lights – obtained from, of all places, the local Lidl supermarket – have now been incorporated into the bottom of the elevating roof. An inexpensive solution which is pretty-much invisible until switched on at night, when, apparently, it supplies more than enough light to read by…

The van was finally finished in March of this year – just a couple of weeks before our photoshoot in fact, and its first ‘public appearance’ is likely to be in May or June.  One or two jobs are outstanding – a set of front door rubbers have been acquired but these have yet to be fitted – something which Peter expects to be “a bit of a challenge” due to the uneven gaps built into this area. 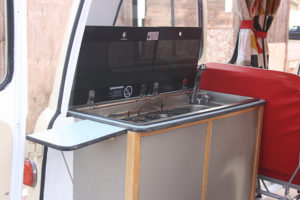 He’s also considering changing the floor covering for a black and white squared ‘American Diner’ type material which would, he feels, go better with the red vinyl seats. Finally, while the tyres currently fitted are almost new, they are car tyres, and Peter suspects the 400E would be better with a set of proper LCV tyres…

So there we have it – a fine job, carried out in remarkably short time, and with minimal facilities but with skill, determination and above all, a willingness to learn and practice new skills. We absolutely love it! 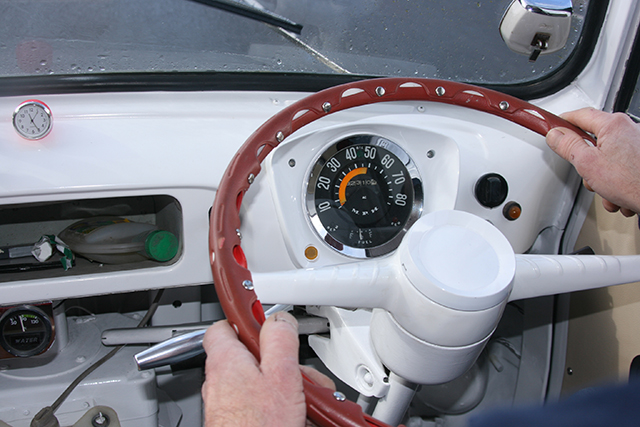 Something that anyone who has ever driven a 400E will surely recognise instantly; the distinctive ‘semi-ribbon’ style speedometer display 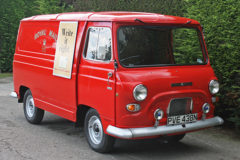