The Peugeot J7 camper is bigger, cheaper and a lot rarer than a VW alternative, and has every bit as much character. Plenty to love then, as Mike Neale discovers. 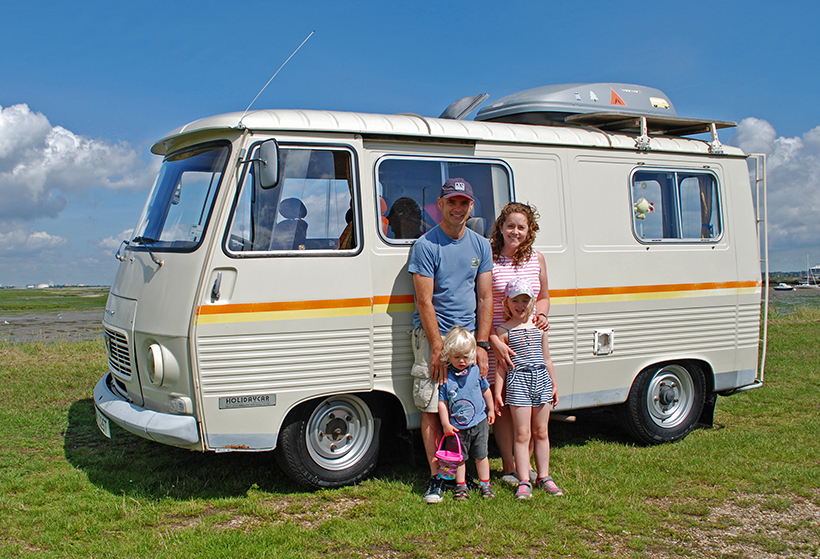 Peugeot J7 camper rejuvenated: Current owners, Martin and Sarah, bought their Peugeot J7 van three years ago, but had to officially ‘import’ it, despite it already being in the UK.

The summer of 1965 saw the launch of Peugeot’s all new J7. It was developed to replace the aging, ‘pig-nose’ D4B van, which dated back to a Chenard & Walcker design introduced just after the war. Initially, Peugeot asked Chausson, who had produced the D4B, to develop the design, but the powers-that-be at Peugeot’s Sochaux headquarters weren’t convinced by the initial proposals.

The project was then entrusted to Peugeot’s in-house design office at La Garenne, which produced a design that was more acceptable to Peugeot bosses. It featured front-wheel-drive, all-round independent suspension, a large cargo space and a light and comfortable driver’s cabin. There was a sliding door each side for driver and passenger, which could, if desired, be locked open while driving along, with a metal bar put in place to protect against falling out. An optional, third one provided side access to the cargo area.

Interior improvement
Peugeot didn’t completely let go of Chausson, however, as they produced the bodywork for the new J7. The payload capacity, of 1,400kg, was similar to that of the D4B, but the interior volume was much greater at 8.7m3, against 6.5m3 in the older model.

Both petrol and diesel engines were offered and, at launch, the petrol engine – denominated type XBP5 – was the four-cylinder, 1,468cc, 56hp unit used in the Peugeot 403 and 404 car models. The diesel unit (type XDP85), had a 1,816cc capacity and produced 55hp. Both types were mated to a four-speed, BC1-type gearbox. 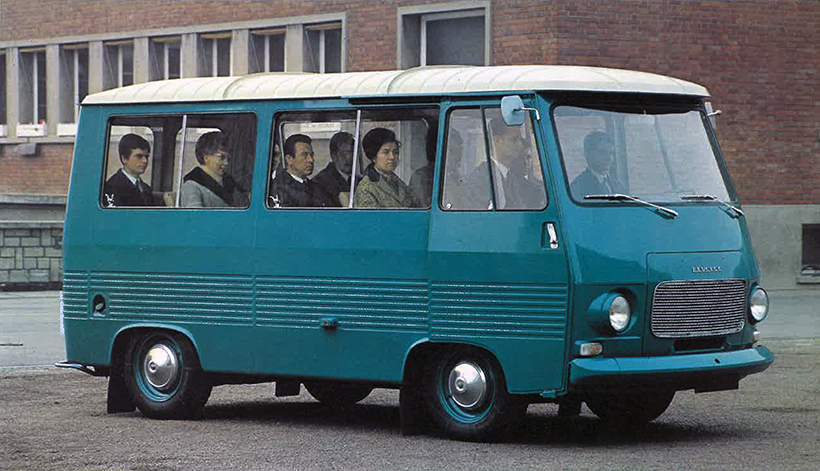 Circular headlamps were chosen, which lasted throughout the production run. Early vans had separate, circular rear lights, indicators and reflectors, but these were soon changed to combined, rectangular units.

To give the interior a modern feel, plastic was widely used instead of painted metal. The speedo unit came from the newly-launched Peugeot 204, being the most modern-looking in Peugeot’s parts bin, and a large front windscreen provided excellent visibility. The first examples didn’t, however, have servo-assisted brakes.

Other options
A two-seater pick-up, two minibus variants (‘coach’ and ‘school bus’) as well as various high-top and long-wheelbase versions, were then offered; these latter types were built by Peugeot-approved coachbuilders, and so appeared in the main catalogue.

The ‘coach’ version had 13 seats, in addition to the driver’s, no rear, side door and a chrome, mesh grille. The ‘school bus’ was more utilitarian, and provided seating for 20 passengers on simple (for which you should read ‘uncomfortable’!) longitudinal benches. 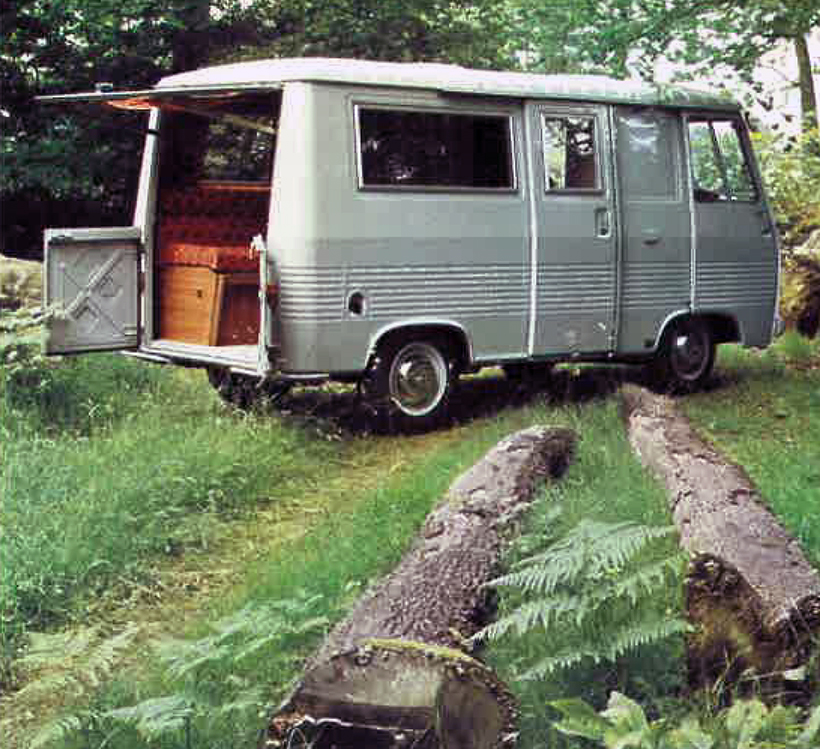 In the Spring of 1966, a six-seat crew-cab pick-up arrived, shortly followed by a chassis-cab version ready for bodies to be added by outside coachbuilders. For 1967, two coachbuilders – Heuliez and Théault d’Avranches – introduced livestock/horsebox models.

For 1968, servo-assisted brakes appeared. An ambulance version was now offered followed, in 1969, by a ‘Fourgon de Secours’, targeted at local fire brigades which, in France, also provided first aid to the injured. A new school bus version provided 29 seats (yes, 29!) on three rows of longitudinal benches, to pack the children in.

Better brakes
In 1975, front disc brakes were added, while the chrome, mesh grille of the ‘coach’ versions was dropped. For 1976, a new dashboard appeared, with the steering wheel from the Peugeot 504, and instruments from the 104. As an option, the conventional passenger seat could be replaced by a small, two-person bench seat.

The 1977 base-model diesel vans also had the XDP90, 2,112cc engine, while 1,800kg versions got a 2,304cc diesel motor producing 68.5hp. In 1978, inertia-reel seatbelts were fitted while, for 1979, the catalogue introduced a ‘Comfort’ option, featuring gloriously 1970s-style orange checked cloth seat covering and headrests, with the Peugeot 104 steering wheel fitted.

Production stopped in December 1979, by which time 336,220 J7s had been produced, and the model was replaced by the modernised J9. The ridged sides were gone and larger, squarer bumpers plus a black plastic grille were fitted – still with circular headlights – containing combined sidelights/indicators. The DNA of the 1965 J7 was still very much evident in the new van, however, although the dimensions were subtly different, with the J9 being a fraction shorter, wider and taller. The J9 lasted until 1991, although it was also built under licence by Karsan, in Turkey, until 1999.

Cliff the Camper
Martin and Sarah Riley, together with children Zack and Florence, have owned their 1979 Peugeot J7 – known as ‘Cliff the Camper’ – for about three years. The vehicle’s first owner kept it until around four years ago, and maintained a record of all the trips made together with all the original paperwork. 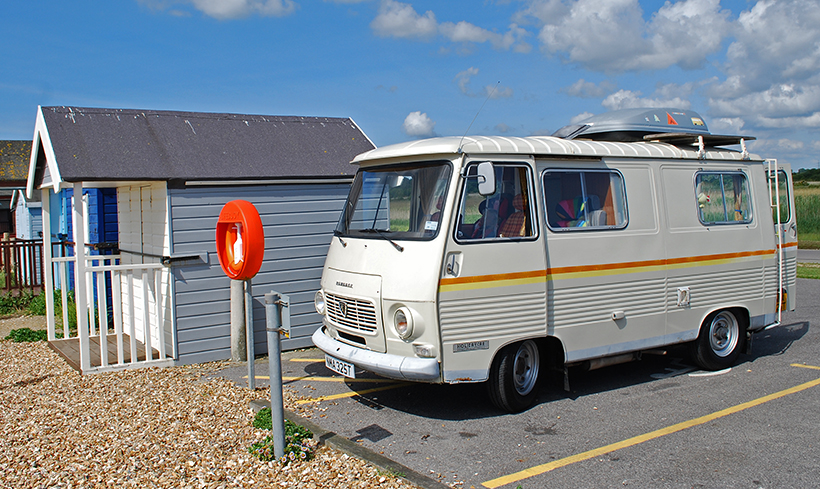 Peugeot J7 camper by the beach – it’s natural environment, but probably not the best atmosphere for long-term preservsation.

The van was converted from new into a camper by Holidaycar, of Arpajon-Sud, not far from Montlhéry, in France. As well as standard J7s like this one, Holidaycar also produced larger, coach-built bodies on the J7 platform. The vehicle’s second owner was based in France, but also had a place in the UK. He’d brought the van over here and put it in a barn, although it was still French-registered. 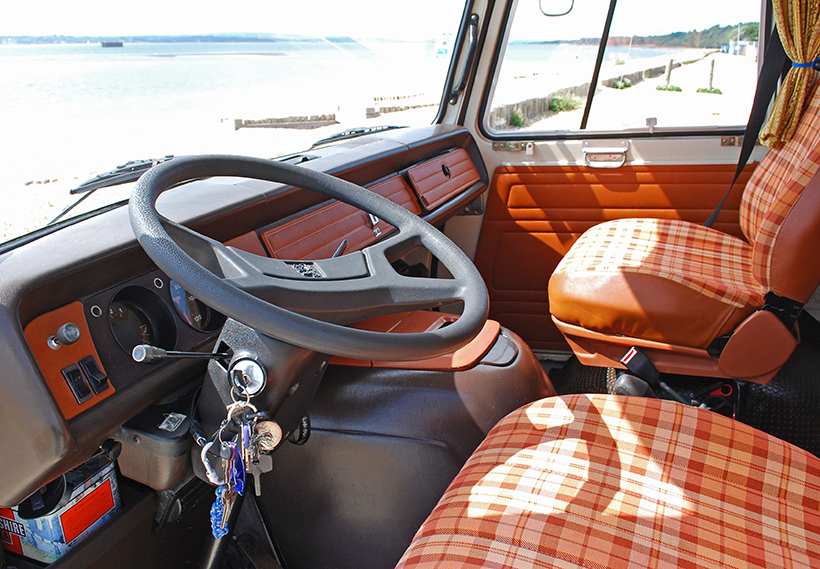 “I decided I wanted a van, and looked at all sorts, including old Bedfords. Then I went to see the J7, and simply fell in love with it,” recalls Martin. When he bought the vehicle – becoming its third owner – he was faced with the task of having to ‘import’ it, despite the fact that it was already in the UK. 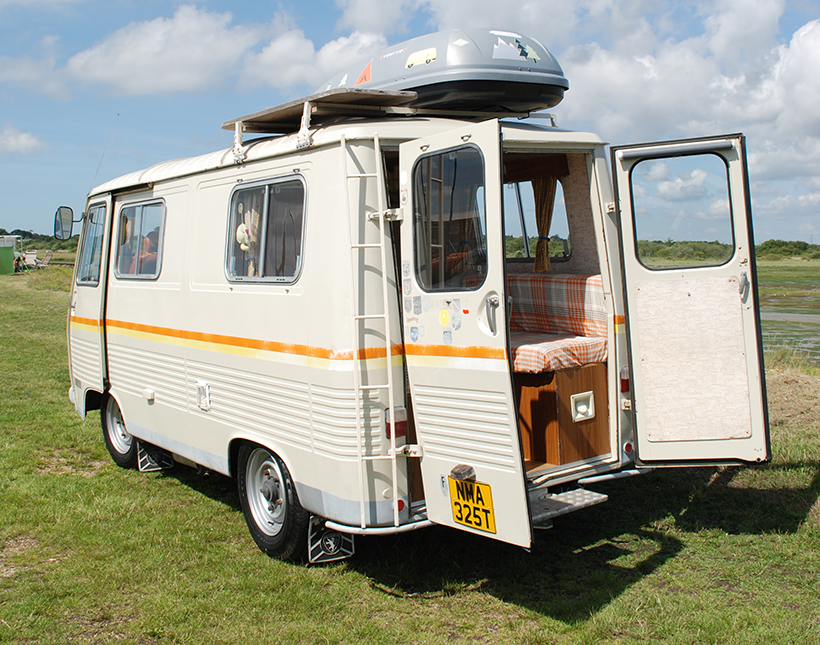 Paintwork is still original, but the front, side windows have been added by the present owner.

Due to the time it had spent sitting in the barn, damp had unfortunately got into all the cushions, and rotted the material. “I bought some children’s bed linen fabric from Dunelm,” Sarah explained, “which was just the right colour; very ‘70s-looking and really cheap, too!” The curtains are the van’s 1979 originals cleaned up, but have been supplemented with new blinds from Ikea. LED lights have been fitted to the original interior. 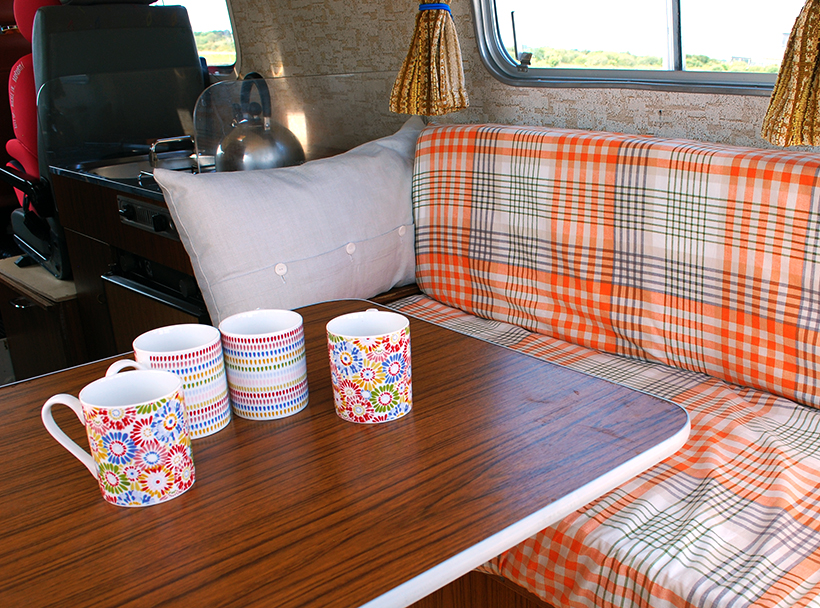 Original seat coverings in the back had rotted away, so have been replaced using appropriately-patterned children’s bedlinen.

The van has its original, 1,618cc petrol engine and four-speed gearbox, which have now done 119,000 kilometres. Mechanically, Martin hasn’t had to do much other than an oil change, fit new points, ignition and a reconditioned alternator. But he’s also rewired the van, sandblasted and repainted the wheels. Apart from this, though, the paint is original. 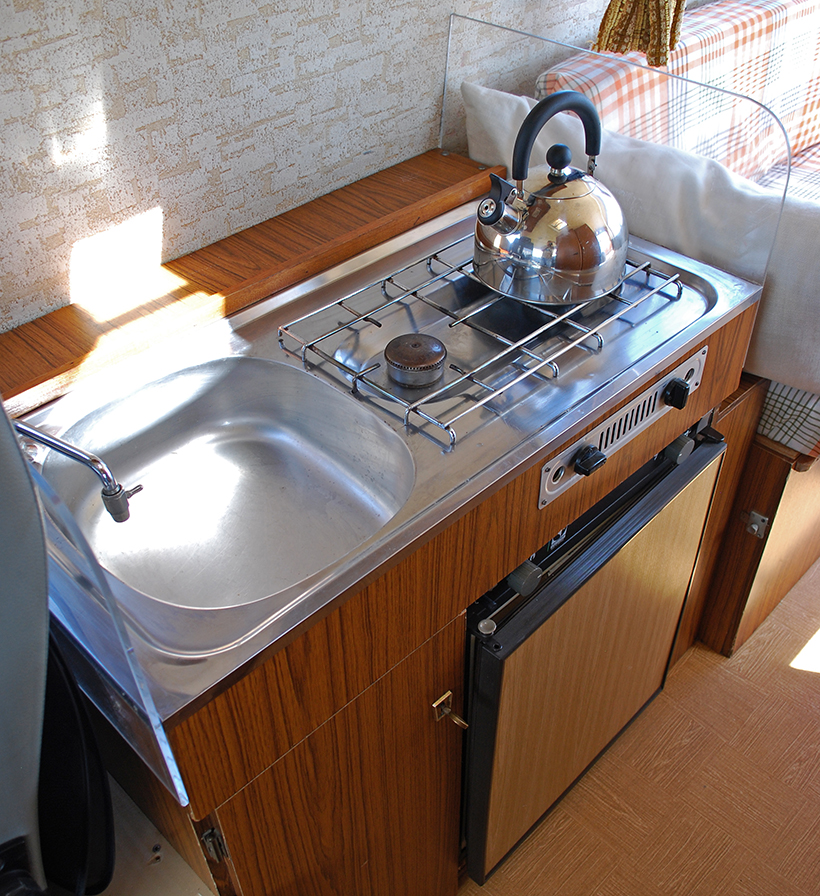 Most of the original camper’s fittings remain.

No going back!
“I used to own a VW Bay-window camper but, having bought this Peugeot, I wouldn’t go back to that now,” admits Martin. “The engine is in the right place in these for a start, and easily accessible. It’s very easy to drive and engine spares are pretty easy to get. There’s much more room than in the VW, and these are a fraction of the price. You’d struggle to spend more than £10,000, even on a mint J7.” 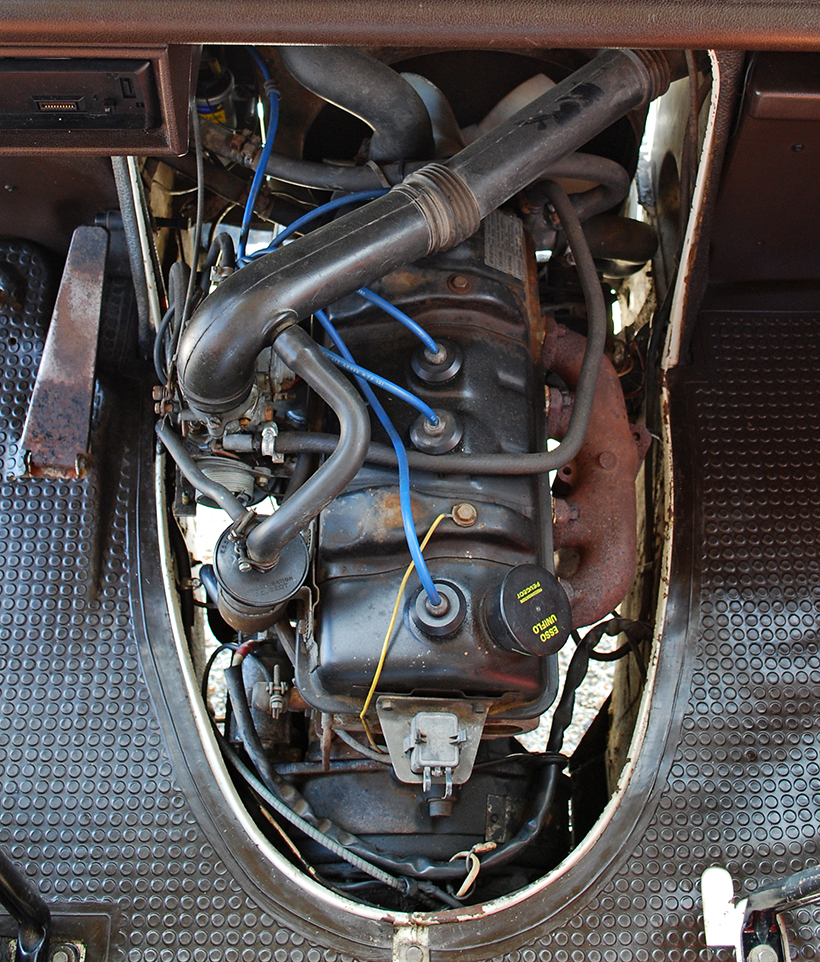 The 1,618cc petrol engine is accessed from inside the cab.

Martin has found Ian Kirkwood of Club Peugeot UK good for sourcing spare parts. Suspension and regular use parts are all available, and some body parts, although these are harder to track down. Fortunately, Martin has only had to do a few small bits of bodywork repair so far, although there are a few spots of rust that need to be attended to around the bottom of the body.

“I’m a Lloyds-registered welder, so that shouldn’t present much of a problem,” Martin tells me. “I spent 15 years as an automotive engineer, designing powertrains, chassis and prototype exhausts for Bentley, including for customers like the Sultan of Brunei. I then decided to give up and go sailing. I bought a boat and started a sailing school in Spain. Then I met Sarah, and we decided to come back to the UK.” 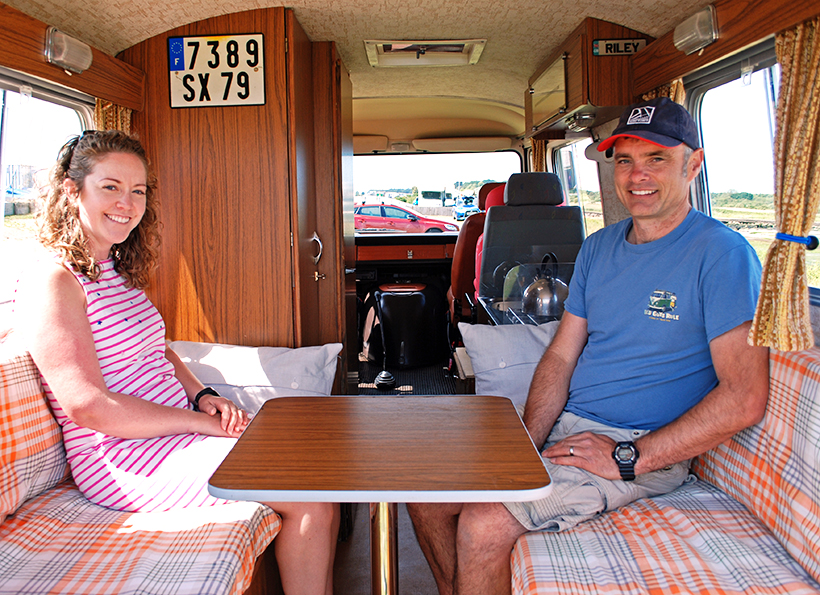 One of two dining tables available in this Peugeot J7 camper

As bought, the J7 only had the rear side windows, so Martin decided to add the front ones, which came from a 1979 Transit, and he then hand-made the plastic internal trims to match the others. He also modified the front cupboards to take a pair of metal frames that he made to allow modern seats to be fitted that can accommodate child seats. These could be changed back later when the children have grown up. 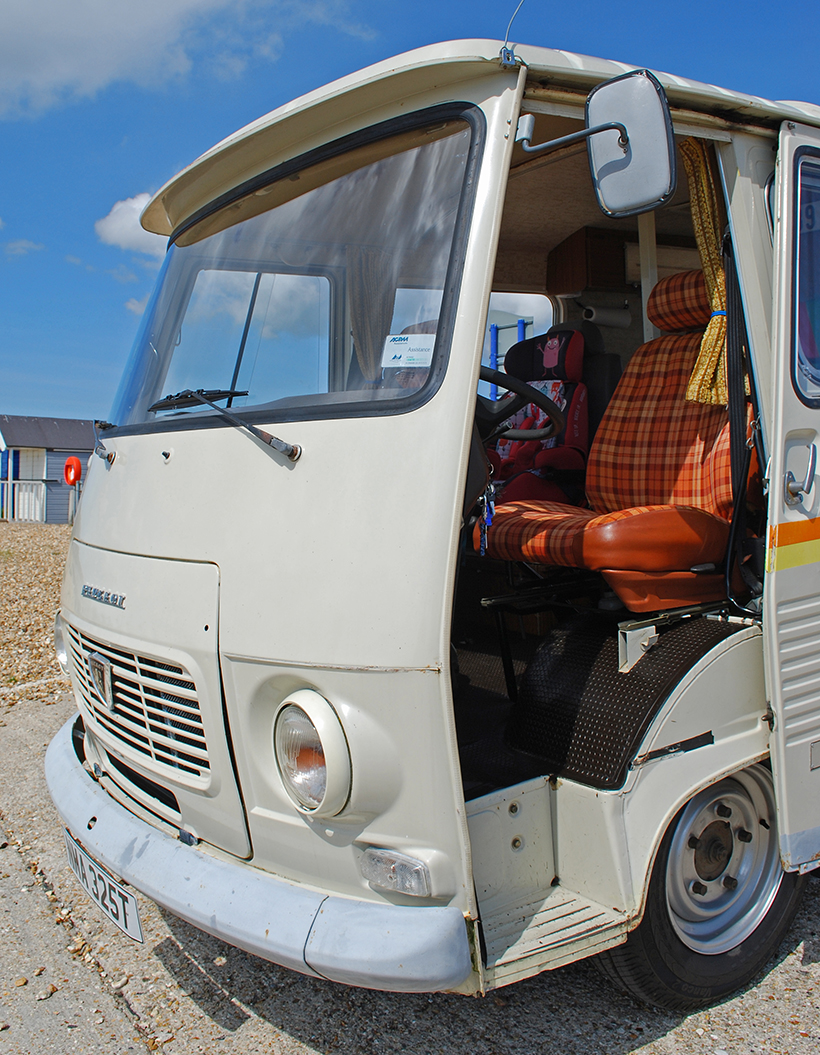 A Peugeot J7 – as with the Bedford CA – really should be driven with the sliding front doors open.

So why ‘Cliff the Camper?’. “Sarah’s grandfather always had either a Peugeot or Citroen when she was growing up. We named it in honour of him, and I think he would have approved,” explains Martin. 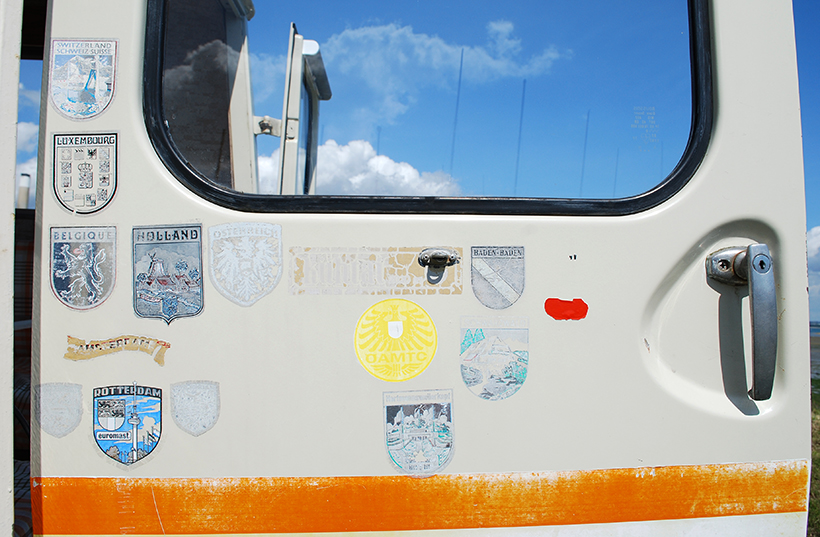 This is certainly a well-travelled van! The previous owner kept a detailed record of all journeys. 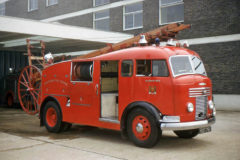 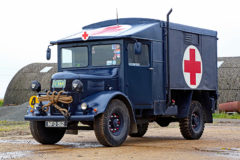