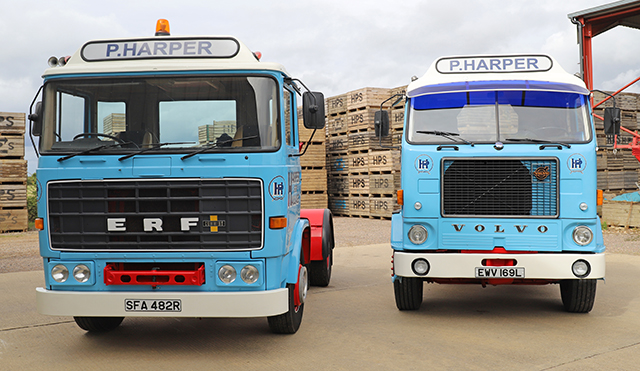 ERF and Volvo were fierce rivals during the 1970s, but Pip Dunn discovers a restored pair that are now happy stablemates at Harpers haulage

The 1970s saw a lot of development in trucks in the UK, and there were two main reasons for this. Scania devised the 110/140 series in the late 1960s while Volvo launched the F88. These two trucks alone were head and shoulders above the kit the Brits were making at the dawn of the 70s. It was a case of catch up and [try to] keep up. Or wither and die. Some did the former, others suffered the latter. 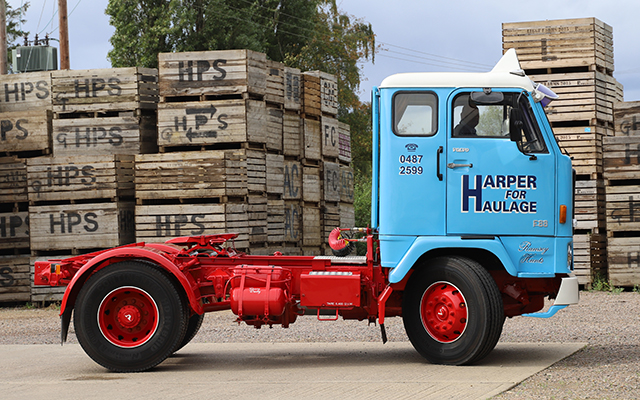 The Volvo F88 has a sleeper cab, ERF has a day cab – but both could be ordered with the alternatives

The Volvo F88 was an iconic beast of the 1970s. The cab first appeared in 1964 on the L4956 Tiptop; the first ever heavy and powerful cabover truck made by a European manufacturer. It was a step change in quality and working environment for drivers. It wasn’t initially available in the UK and indeed it was – technically – short-lived as the following year it was rebadged as the F88. It appeared in the UK in the late 1960s and was joined in 1970 by the bigger F89 with the 12-litre 330hp engine, although this was left hand drive only and only a small seller in the UK.

Meanwhile, back at home, until 1974, the ‘jewel in the crown’ of the ERF catalogue was the A-series, introduced in 1972 with a now-dated cab that had first appeared in 1962 on the LV series. In 1974, however, with an all-new cab, the B series broke cover and it was a major improvement. It was launched at the London Commercial Motor Show. 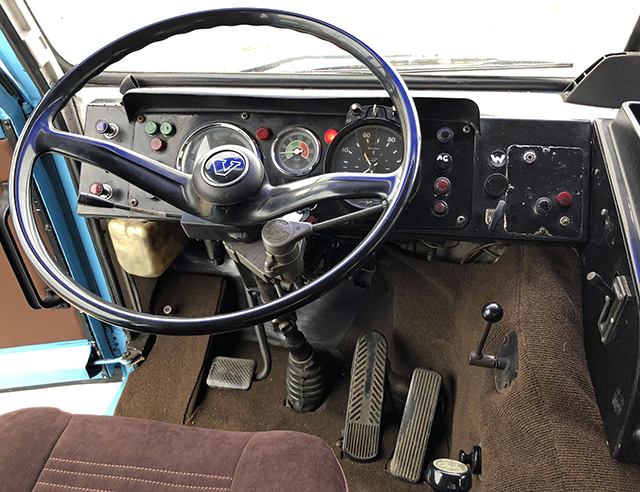 Dashes were functional but rather simple in the 1970s!

It’s easy, and lazy, to naturally berate British cabs of the 1970s compared with their European counterparts, but the reality was the B series was a darn good cab. It was actually much better than the F88 and a match for many of the European cabs of the time. Interestingly, Seddon Atkinson with its 400 and Bedford with its TM also both had excellent cabs at the time; both available as day and sleepers and so allowing UK hauliers to use British trucks even when travelling long distances and into Europe, and beyond. 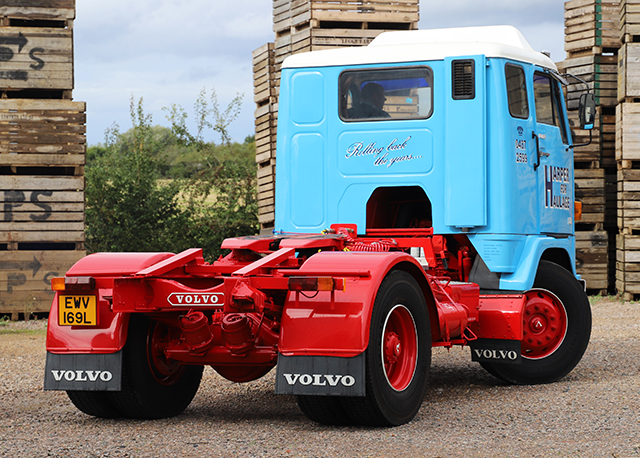 Today, however, examples of F88s and B series are sought after and very popular on the heritage scene. And that is why I’ve come to Harpers Haulage at Ramsey to meet Johnathan and Nigel Harper and his Nigel’s sons Adam and Matthew, owners of superbly restored examples of both models. To get into the mid 1970s feel, I’ve even popped a bit of Sex Pistols on the stereo on my drive to rural Cambridgeshire!

A Swedish classic
The F88 is a truly interesting machine, because the first thing you notice about it is it’s left hand drive! And that’s because EWV169L is actually an import. It was sold new to an operator in Portugal in 1973, and he used it for daily work hauling fruit in the Algarve until, believe it or not, 2014! Achieving a 41 year working life means he certainly got his value for money out of it!

“It still had an MoT,” says Jonathan, “which is a six-monthly requirement in Portugal.” So how did a haulage company in Cambridgeshire come to buy a Portuguese F88?

“We saw it on Ebay being sold by Dave Gilmour in Poole. We kept looking at it, and the price was static. We’d been after an F88 so eventually we took the plunge we bid on it.” 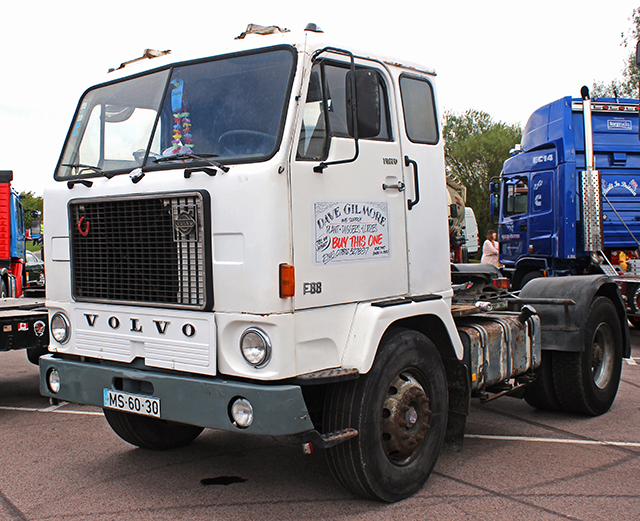 The Volvo F88, having spent its working life in Portugal, was bought unseen on eBay, and had to be trailered home from Poole.

The truck had been driven from Portugal to Santander and taken by ship to Poole. Dave acquired it purely to sell-on. “We bought it there and then, without actually inspecting it. We paid £8,750 for it…. then Jonathan went to Poole at actually see it in the flesh!”

Under the single-bunk sleeper cab is Volvo’s tried and tested – and very popular – 9.6-litre 240hp engine. A real classic of the 1970s scene.

Having secured the truck, Nigel, Adam and Matthew drove to Poole with a low loader to collect it. Then the hard work started, although in fairness, the truck was in very good condition. Says Nigel: “Every panel on it was original! It took us 12 months to get it in good enough condition to go for its first [MoT] test.”

Because it had worked in a hot climate it had never had antifreeze in it, so that needed to be addressed. The brake valves had all leaked. Adds Nigel: “We went through all the brakes and got them sorted. It needed new headlights, mudguards and six new tyres, and a manufacturer’s plate, which the Volvo dealer at Ely managed to source for us.”

The truck was MoT’d in November 2015 and passed. “It’s fully road legal now, and we can, and do, run it on the road occasionally.” It’s been a visitor at Truckfest, Gaydon and Newark but Jonathan would like to take it to more shows… “but we are too busy!” he laughs. 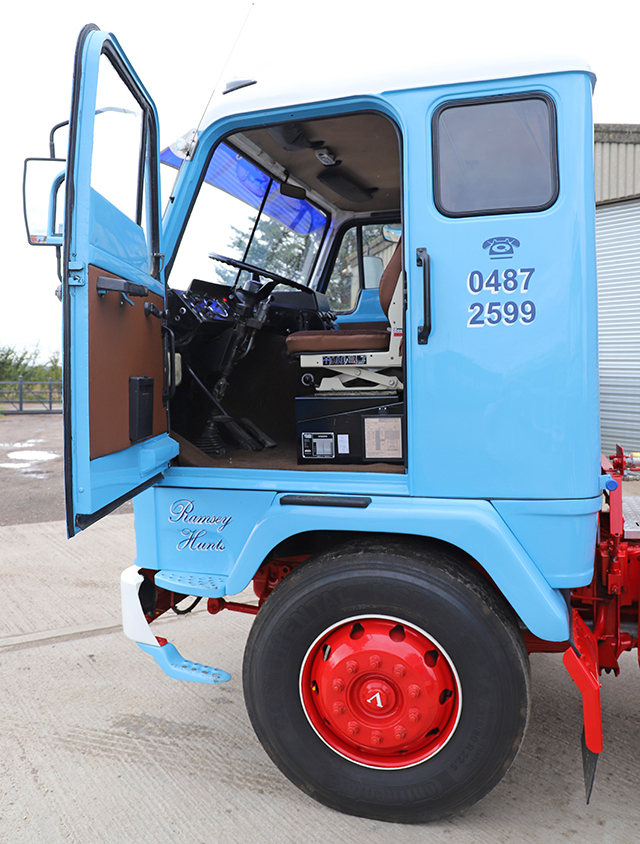 Entry into 1970s cabs was more challenging that it is in today’s trucks!

Interestingly, Harpers – which celebrated its 50 years in business in 2012 – never actually operated F88s, but we always wanted one, “especially a left hand drive one. I just liked it! We’ve put a lot of time into the restoration. One issue we had was it was plated at 40-tonnes in Portugal, so we needed to re-plate it for the UK!”

Once it was MoT’d, the truck was taken to Wellingborough and had the cab stripped and refitted. It had two new drop wings and a new sun visor, kick steps and a diesel tank. The interior was restored in 2019. “The truck has cost more than double to restore than buy.”

The F88 has experienced some issues, as you’d expect on what is now a 47-year old truck. “We had a slight brake problem, so a relay valve was changed and that seems to have done the trick. But I’m always careful when I drive it,” says Jonathan, “it is not as good as a new truck when it comes to stopping!” The truck has also suffered a water leak after a show at Newark, but that was dealt with by Volvo at Ely which fitted two new cylinder heads.

It is taken to local DAF dealer Ford & Slater for its annual test. Nigel is very complimentary to James Ellis at Volvo at Ely; “he’s helped us a lot.”

Now painted in Harpers’ attractive sky blue livery, and professionally sign-written, the truck looks an absolute stunner. The restoration – inside and out – has been both meticulous and authentic – it even has the correct era-specific phone number on it. Only the steering wheel gives it away as not a ‘genuine’ British truck, and even then, “We could always claim it was because it was used on the Middle East runs!”

The best of British
The ERF B Series is that little bit newer than the Volvo, both in design and registration, and is registered on an R-plate, so dating from 1977. Unlike the Volvo it has a day cab – a common sight on many British haulier’s trucks at the time. 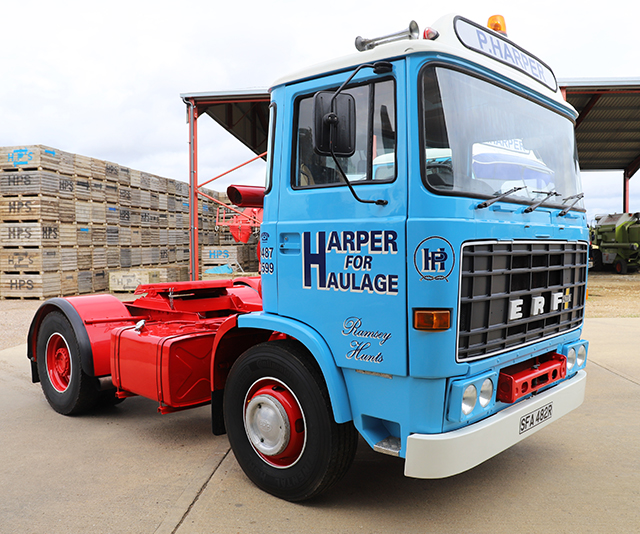 Like the Volvo, the ERF was also secured from eBay. And while it was a UK born and bred, it was a longer distance for Nigel and Jonathan to collect as it was for sale in Invergordon in the Scottish Highlands! Luckily, they didn’t have to go the 500-plus miles to collect it and the seller agreed to meet them halfway at Carlisle so it was only a 240 mile trip to get hold of the truck. But they were able to drove the unit back solo and without issue. “The truck had no speed limiter and would easily cruise at 60mph on the six hour drive back from Carlisle! We had the perfect drove him, though we did detour and stopped at Sandbach for sentimental reasons!” 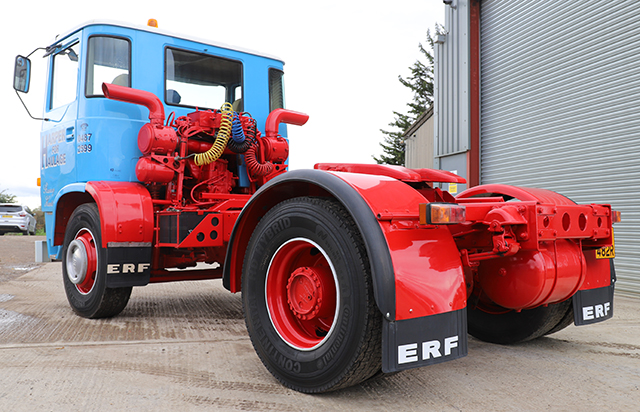 Nigel and Jonathan bought this ERF on eBay too, and collected it from Invergordon, in the Scottish Highlands!

The sale of the truck, which started its life in Norfolk, also included a period low loader trailer with it. That carries an old 1961 Massey Ferguson 35 tractor as a load. It was bought from a Nigel and Jonathan’s good friend Pete, who lives next door, and the Harpers all learned to drive it back in the day. The ERF and trailer were a steal at just £5,000 when bought in 2015. 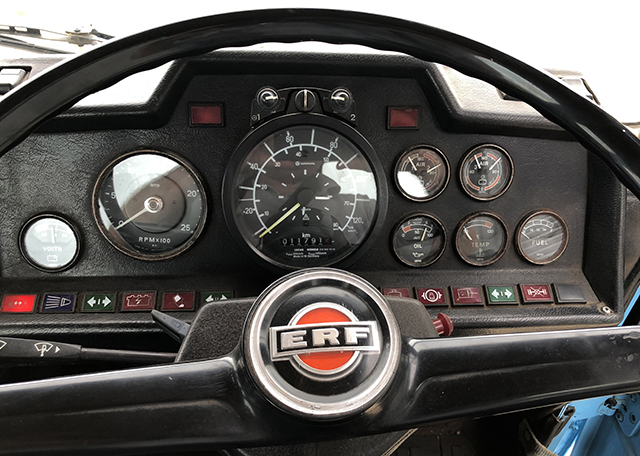 The ERF’s dash is similarly ‘plain and simple’

Nigel says: “We operated ERFs, though never the B-series. We had the A-series.” Once the truck was at its new home, the hard work started “We stripped the brake system and went right through it to make it good. We fitted new injectors and four new headlights. We decided to buy an old B-series eight-wheeler to be a parts donor. We have taken the fuel tank off that, as well as the mudguards, and it will provide host of other parts [in the future].”

The seats have been re-covered, bit not a lot else has had to be done to the truck. “It’s got a door from [the similar] M-series, so that is not 100% authentic. We don’t seem to struggle for parts for the Volvo, but it’s a little harder for the ERF, hence the door. We might struggle with some of the interior panels as will  But we can still get new parts directly from Volvo if we need to!”

“I love the ERF, they were good old motors! We ran them back in the day along with the occasional Foden. But we never had a Seddon Atkinson.

Both trucks have been used for family weddings, Nigel’s daughter Laura went to her big day in 2016 in the ERF while Matthew took the F88 when he tied the knot in 2016. Adam, however, is a big fan of American trucks so borrowed a Kenworth for his wedding in 2015. 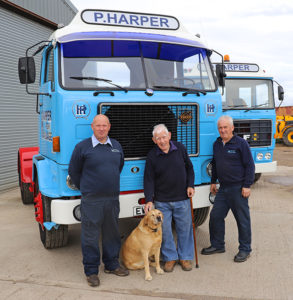 Jonathan and Nigel Harper flank their dad – and founder of the firm – Peter. Diesel the dog gets in on the photo call!

Next in line
While Nigel and Jonathan ‘tinker’ with both trucks “usually on a Sunday”, maintaining the busy 50 trailer-strong haulage fleet is the day-to-day job, shifting vegetables – mainly carrots, onions and potatoes – but the Harpers ‘heritage fleet’ is not staying still. Recently a smart Scania R143 was bought and that is next in line or restoration, although it actually is in not too bad a shape as it is, and still runs and drives ok.

“It was one of the first ‘blinged up’ 143s,” says Johnathan. “It was owned by renowned customising teams of Coles in Banbury, so it has a smart air-brushed paint job and lots of extras. F448YOA was used by Coles for three or four years before it was sold to Andy green who then sold it to Harpers in Easter 2019.

But for the time being, Harpers’ two stunning restored 1970s trucks fly the flag for the company. And they really look the part! 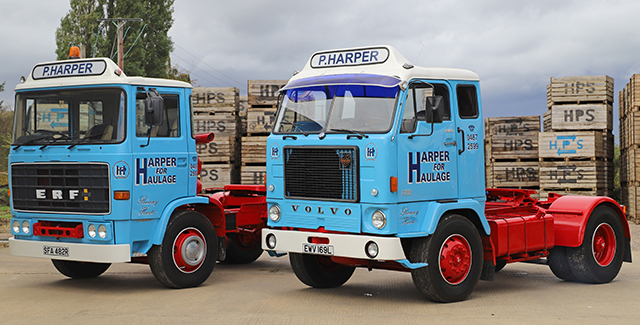 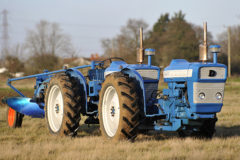 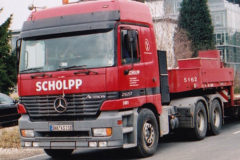