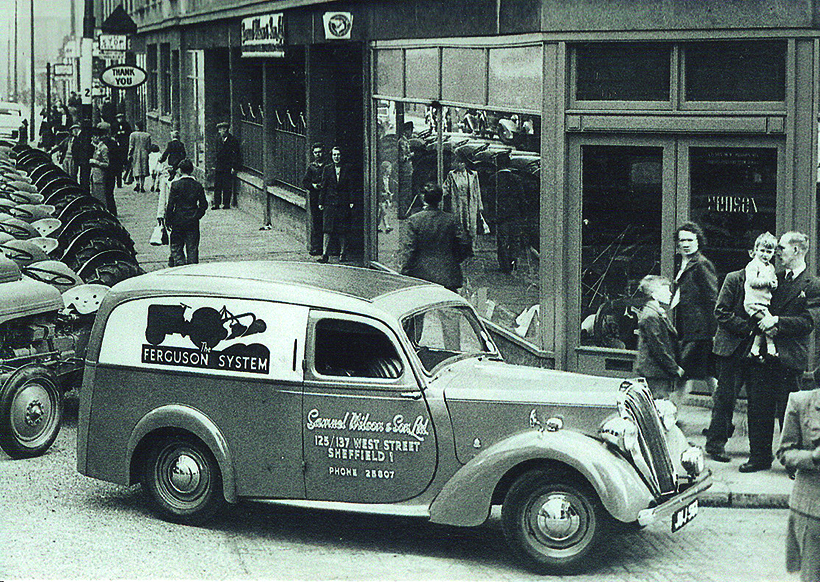 With the new TE line came dealer service back-up, quite naturally connected with Standard dealerships in most cases and, therefore, a Standard van was needed. However, before the famous 1949 Standard Vanguard 12cwt van came along, there was the Standard 14 van, which a number of Ferguson dealers used.

All grey Fergie tractors came with a six-month warranty that included four, free, on-farm services. After the warranty expired, the service engineer would still make free calls to the farm to check the tractor over. Any work found to be necessary, and agreed to by the farmer, would be charged for; it was excellent after-sales service! Ferguson dealers had been the first to provide a very comprehensive service, and service engineers were given vans to deliver parts and assist with on-farm repairs.

The only survivor
This is the story of one of those vans, a 1947 Standard 14hp. In fact, it’s the only known survivor, although it is thought the company also made the 12hp as a van. 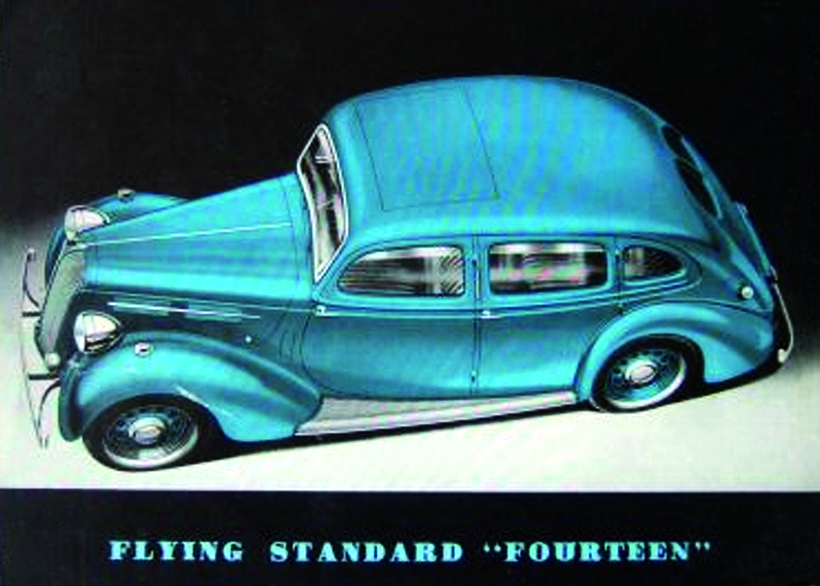 A publicity image of the Standard 14 car, which provided the basis of the Ferguson van.

This survivor, possibly the only one left, was built in 1947 and used by dealer ‘Tractors of Bath’, until 1949 when the new Standard Vanguard Phase One 12cwt van became available to the home market, and was offered to the dealer network at a knockdown price of just £373.

The 12 had a 1,609cc, four-cylinder, side-valve engine developing 44hp, (the 14 had 1,776cc and 50hp) with downdraught Solex carburettor. The engine bores had ‘Brico’ short chromium-alloyed steel sleeves inserted into the top of the cylinder bores, to minimise wear. Adoption of split-skirt pistons allowed a good fit without scuffing, a new combustion chamber shape – a slightly larger space directly above each piston – gave smoother firing, and there were flame-hardened teeth on the flywheel. 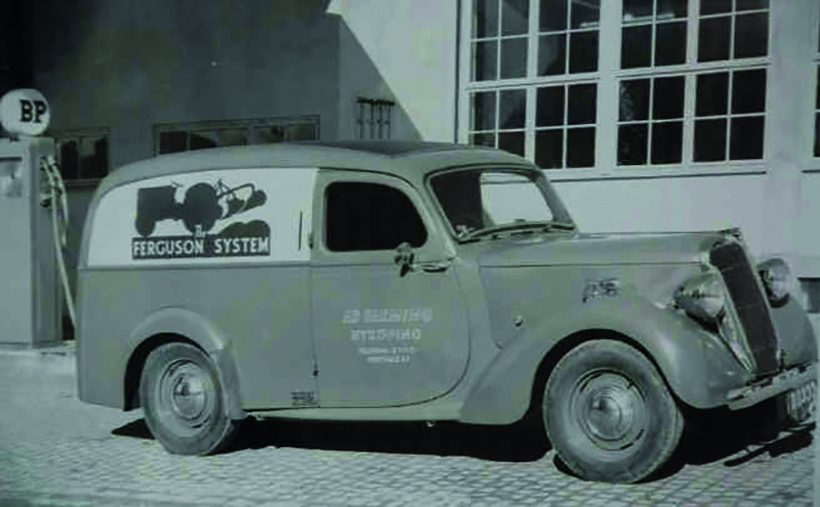 At least one of these Standard 14 vans went to Sweden.

The engine had a compression ratio of 6.5:1 with ‘Buoyant Power’ flexible engine mountings, ‘Harmonic’ cams, a diecast aluminum cylinder head, pressurised external oil filter, and was  connected to a four-speed gearbox with synchromesh on the top three ratios.

Door-to-door deliveries
The 14hp in question was sold to Blakes Farm, Englishcombe, near Bath, for use making door-to-door milk deliveries – crates and bottles only, no heavy churns. The Standard was very robust, but also very heavy and incurred a greater road tax due to its high kerbside weight (commercials were taxed by weight, cars by engine size, in those days) therefore, later on, Blakes bought a lighter Austin A40 and saved a £1 or so per year – a not insignificant amount in 1955.

The Standard was put to one side until its future could be decided. From time to time, the old van was brought out and given a run, but even this stopped in 1982, when Grandpa George died. It then remained tucked away at the back of the country garage showroom, undisturbed since 1983. It stands alongside the third vehicle used for door-to-door deliveries; a relatively young Austin A55-type 10cwt van. 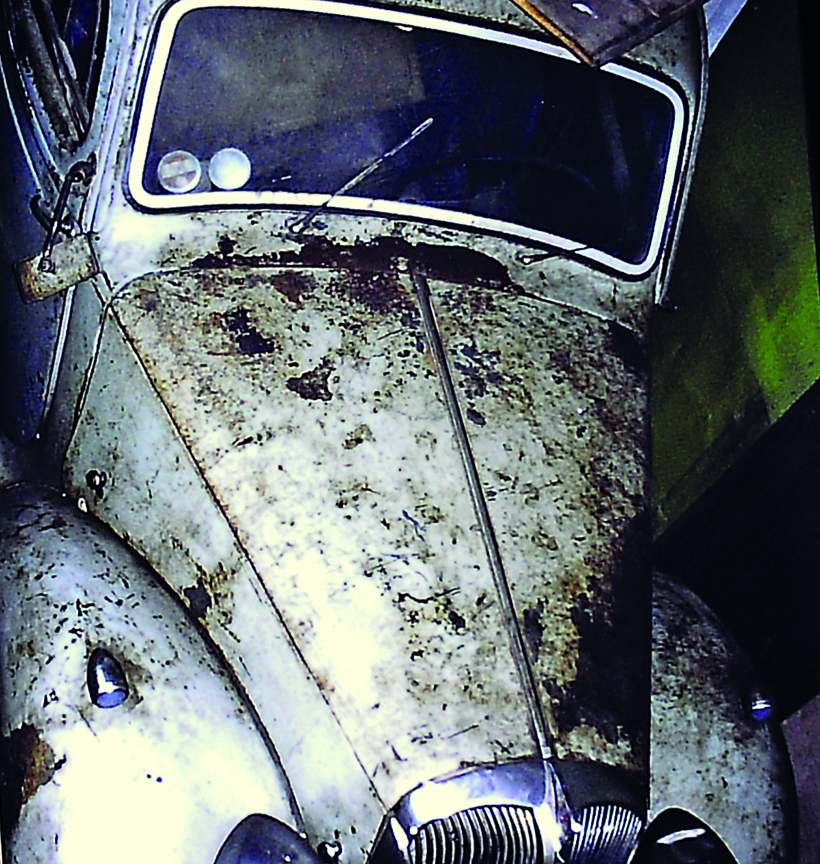 A top view from a dizzy height of the Standard 14!

There are photographs surviving from when the van was in use, together with the original logbook. It’s registration was FAM 335 (March 1948), issued by Wiltshire County Council, the boundary for which ran close to the city centre of Bath (perhaps the dealer’s office was actually in Wiltshire, or the supplying dealership was).

The body is of metal panel construction, the flat panels being made of steel while the heavily, curved ones are aluminium – easier to shape by rolling and beating by hand. All these are fixed to a very well designed and neatly fabricated wooden frame. The rear door is very heavy and solid, side-hung and is carried on no fewer than three hinges. 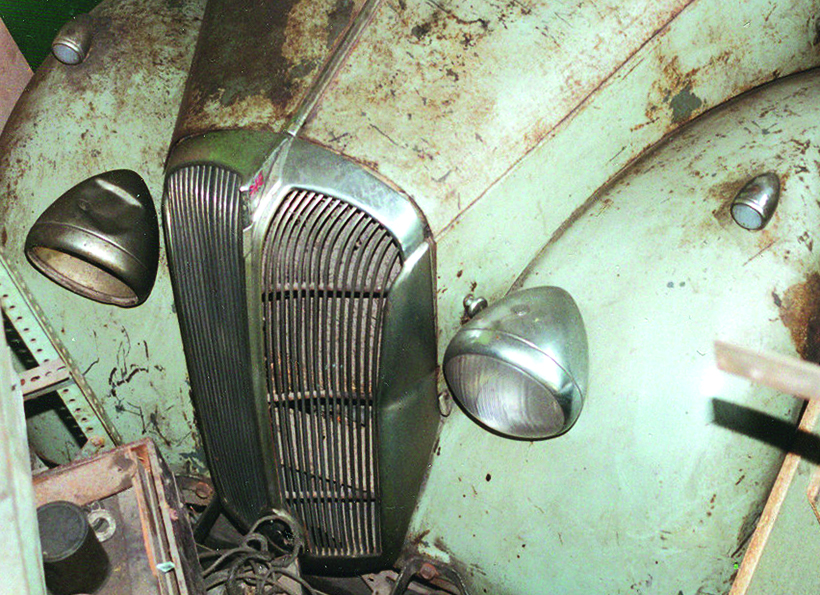 It does have small rubber buffers to prevent any squeaks and rattles, and a T-shaped budget key now operates the lock – originally it would have been a conventional door handle. Maybe this was done deliberately as a security measure for use when making door-to-door milk deliveries. A rear bumper was not considered necessary, and the rear number plate and lamp units are mounted on a recessed panel below the door.

Amazingly, it was September 1999 when I first saw this van; I found it difficult to photograph because it was parked very close behind the A55 van, and almost touching several other vans. The owner didn’t want to get it out to be photographed, however, together we pushed a Land Rover away to create a little space. 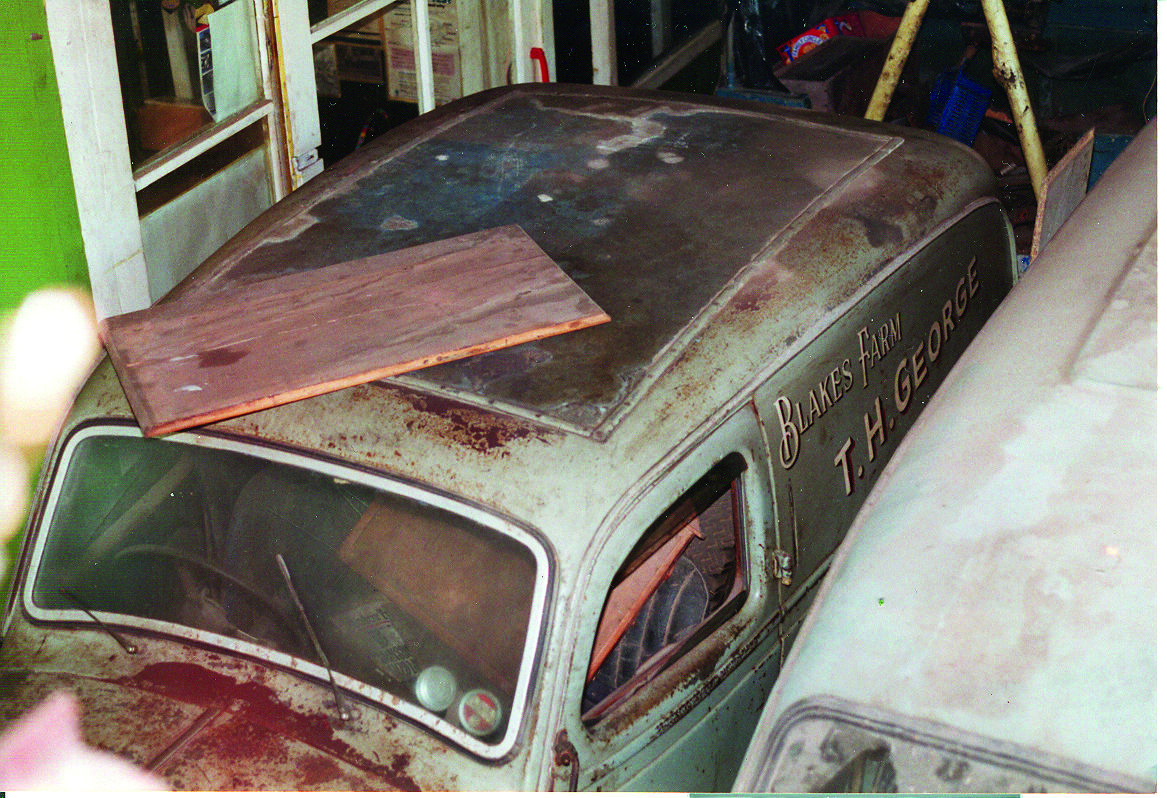 The roof still has its fabric centre panel in place.

Variations in design
Lew Thomas, of Bedford worked on the family farm, and can remember the Ferguson Standard 14 service vans visiting. Leo Weager from Eastnor, in Herefordshire, was a Ferguson service engineer and used one of these vans; he described it as the 14. He also confirmed that, although all the vans were of a very similar design, there were small variations – no two seemed to be identical. For example, some had a window in the back door – others hadn’t.

Arnold Staples, of the Ferguson Club, told me that on his employer’s vans, the rear door displayed the Ferguson logo, and the tractor’s large rear wheel was made into a round window. Inside the cab, it had rubber mats in both footwells and, in the back of the van on both sides, there were wooden pigeonhole-type bins to carry spare parts and disposable items used during servicing, such as oil, CB points, sparking plugs, and later diesel injectors. 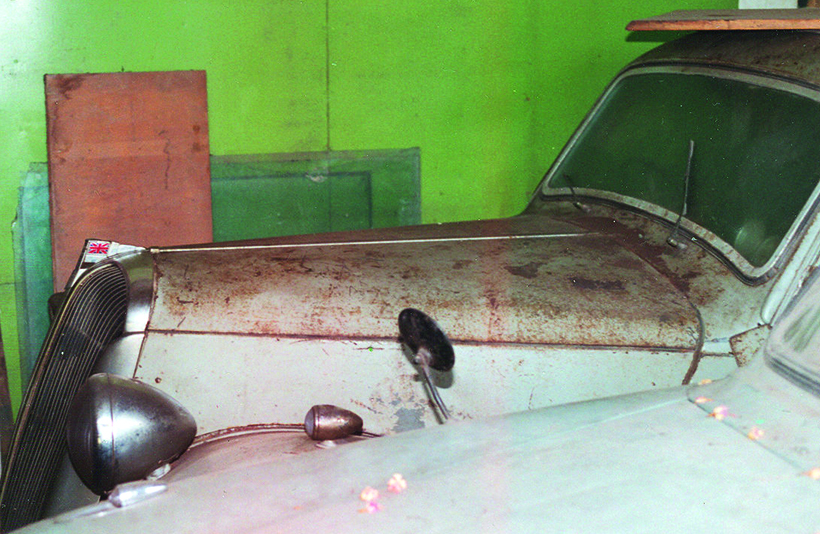 The Standard 14 is squeezed in between many other vans from the milk round that have also survived.

A large 25-gallon drum of Shell oil was carried, laid down in a cradle (reaching up to the front seat backs), and it had a dispensing tap screwed into the filler bung hole. Also carried were two, five-gallon drums of similar oil (one on either side) for sale to farmers who wanted to buy oil in bulk to top-up their tractor’s sump.

Arnold also knew these vans as 12hp ones. He was an apprentice fitter at a large dealership (Hogas), and worked on both tractors and vans – servicing and repairs. This dealership had nine vans spread over four locations; three at Preston, four at Kendal, one at Ulverstone and, lastly, one at Haydock. He mentioned their economy and ability to pull well in top gear. The follow-on Vanguards were more ‘peppy’, but that was paid for at the fuel pump, and they could trundle along in top gear with their column change. 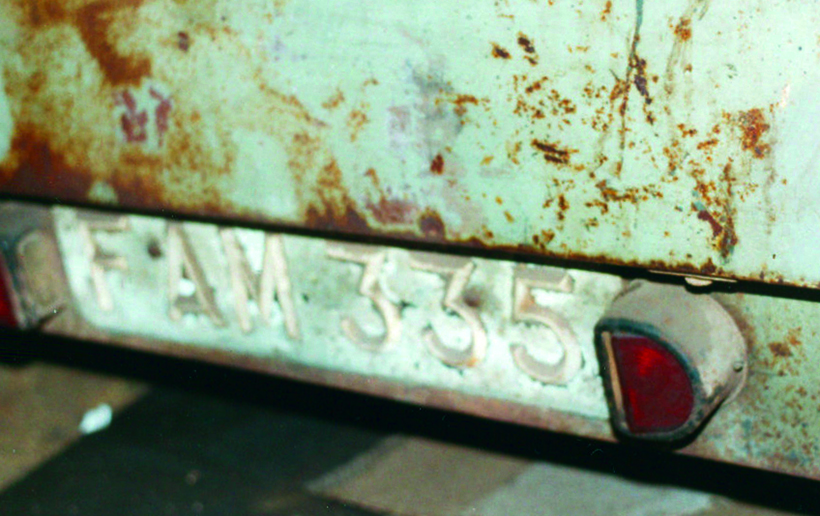 Old style D rear lamp units are all part of the flavour of the possibly unique van.

Fred Wilson, grandson of Samuel Wilson, had a family business selling Ferguson tractors, Standard and Austin cars, in Sheffield. He can just remember the 12 vans as a very young lad, one – KWE 55 that dates from January 1948 – had a single rear door with rectangular window, and a fog light fitted on the front bumper. This firm also used some diesel Vanguard vans.

It’s thought that Ferguson supplied them to dealers, not the Standard Motor Co. Tractor dealers just added their name and address to the cab and rear doors. The other similar van was the first of just two 14s the dealership would have, and JWJ 545 was new in June 1947. 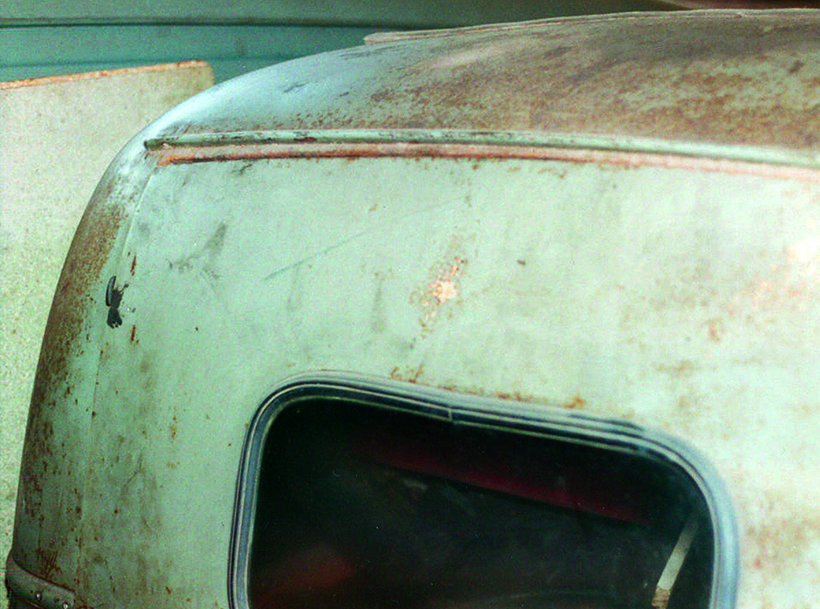 The rear window was an original part of the door.

Another Standard van of the same design was CVG 677, issued in January 1948, in Norwich, and described as a 12 van. It was bought secondhand by Joe Hitchman, in February 1950, from local Rootes dealer Cecil Kay Ltd of 10-20 Essex Street, Birmingham. Joe was a business trader and bought it for the colossal sum of £525 (the dealer had three vans recently disposed of by Ferguson).

Ferguson was buying new replacement Vanguard vans for as little as £373. His son, John, remembers that the van had its twin rear doors replaced (at some expense) by his father soon after purchase. The work was carried out by Dyson Coachbuilders of Wall Street, also in Birmingham. A photo dated 1954 shows the van with a single door, exactly as all the other examples had. Joe kept the van until May 1957 with bodywork by Mulliners of Birmingham for Ferguson. 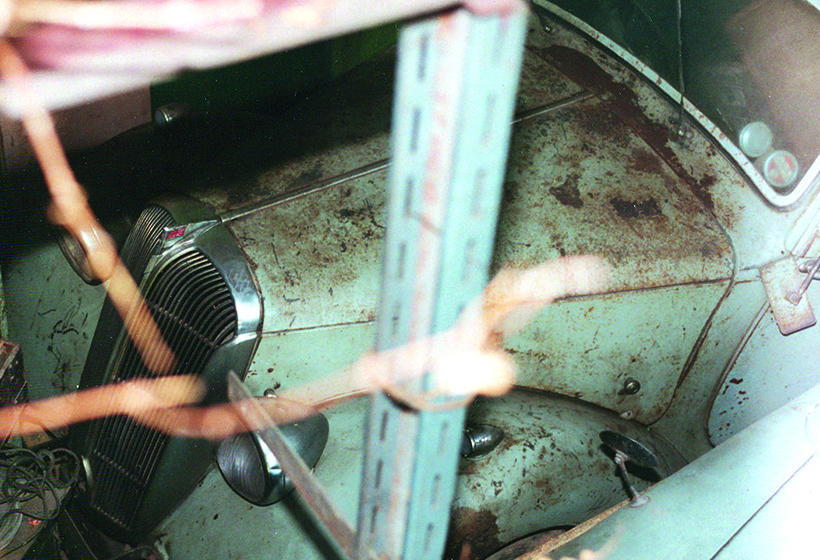 It would be good to see the van come back on the road, or get restored back to its original Ferguson colours.

As an interim measure, 50 early post-war 14 saloon chassis/scuttles were taken straight off the production line and quickly converted to vans. The bodywork was probably by Mulliners of Birmingham, which was building ‘woody’ estates to a very similar style. They were finished in the famous grey livery of Ferguson, and had a lot of chromed trim – they must have looked very impressive and upmarket. 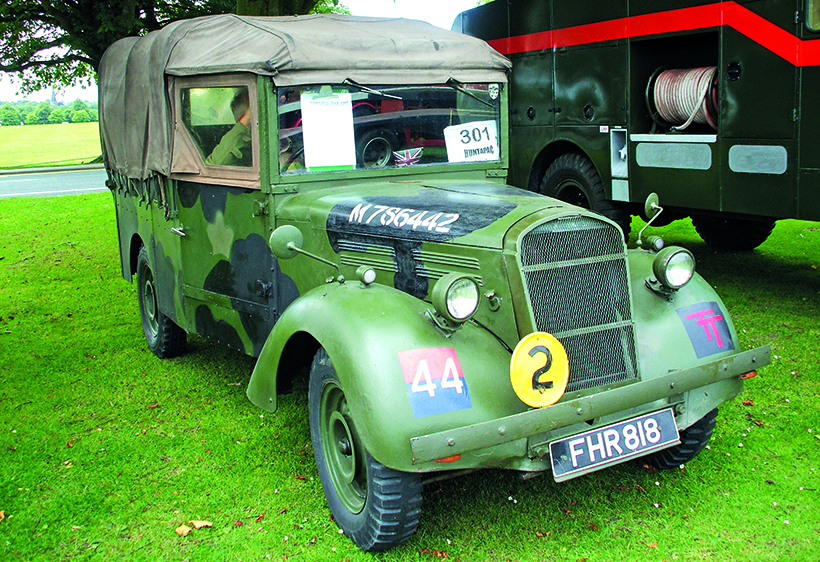 The wartime ‘Tilly’ kept in production post-war, but for export only. Some were sold as Ferguson service vehicles.

My good friend, and Standard 14 owner, Bill Dolling, believes that the vans were scratch-built and, consequently, each one, although built to the same basic design, differed in detail. Literature sent out to dealers informing them of the new Vanguard-based van, described the earlier model as a 14 van, so there you have it. Anyone know of another one stored anywhere? 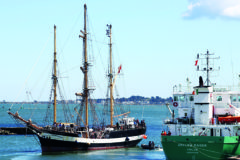 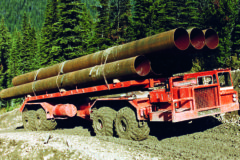