Chris Graham enjoys an interesting but chilly visit to Bernard Pike’s East Sussex workshop, for a look at his 1972 MF 200B Crawler Loader. 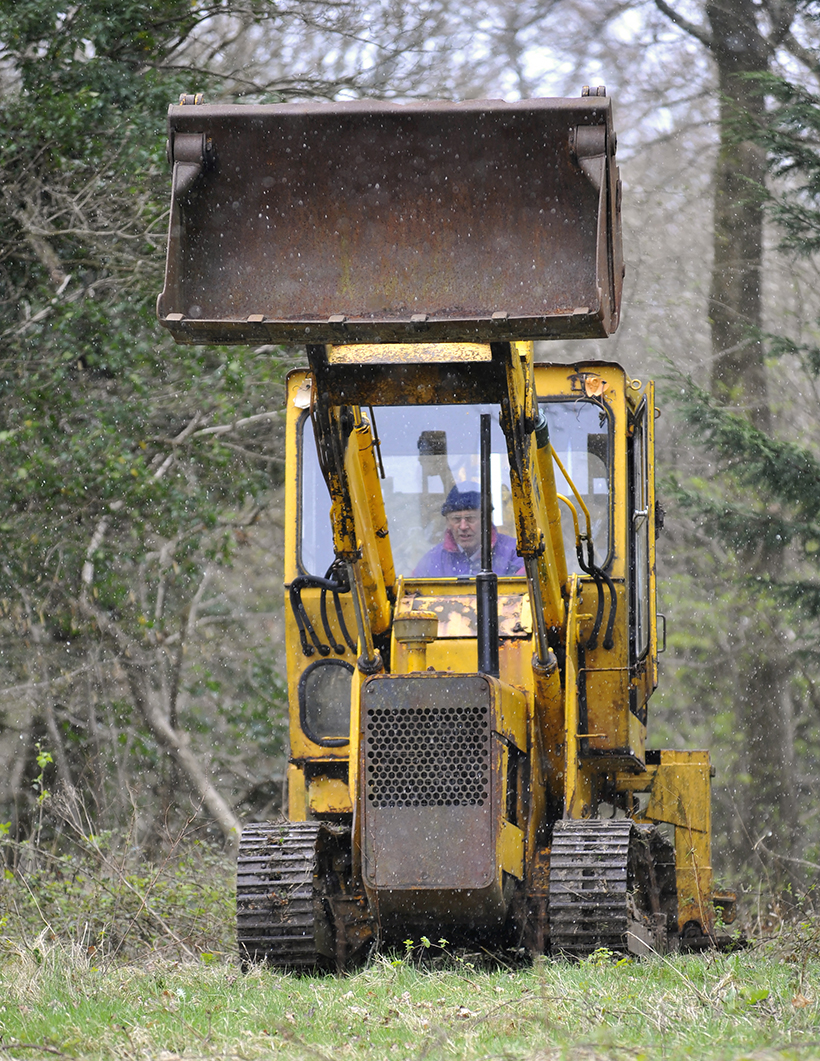 Bernard Pike’s owned this MF 200B for about 12 years. It’s still fully functional and capable of hard work.

Tractor-derived crawler/loaders are much more niche market – in terms of their general appeal – than conventional tractors. They’re slow, heavy, cumbersome and have to be trailered everywhere. However, if you have a specific need to move lots of earth, level an area of ground or dig a series of trenches, well, there’s nothing to touch the brawny functionality offered by one of these machines.

Massey Ferguson has been making them for years, in a variety of sizes and with varying degrees of functionality. Using them well is an art in itself and, if you’re lucky, you may have seen demonstrations of what they can do in skilled hands, at a working day or agricultural show.

Surplus to requirements
Bernard Pike bought his 1972 Massey Ferguson 200B about 12 years ago, and it was a machine that he’d been aware of for a while. “I’d known about it since the late 1990s, and had both used it and carried out some maintenance on it for the previous owner,” he explained. “Then, in the early 2000s, it got superseded by a much newer and more capable machine, and became surplus to requirements. 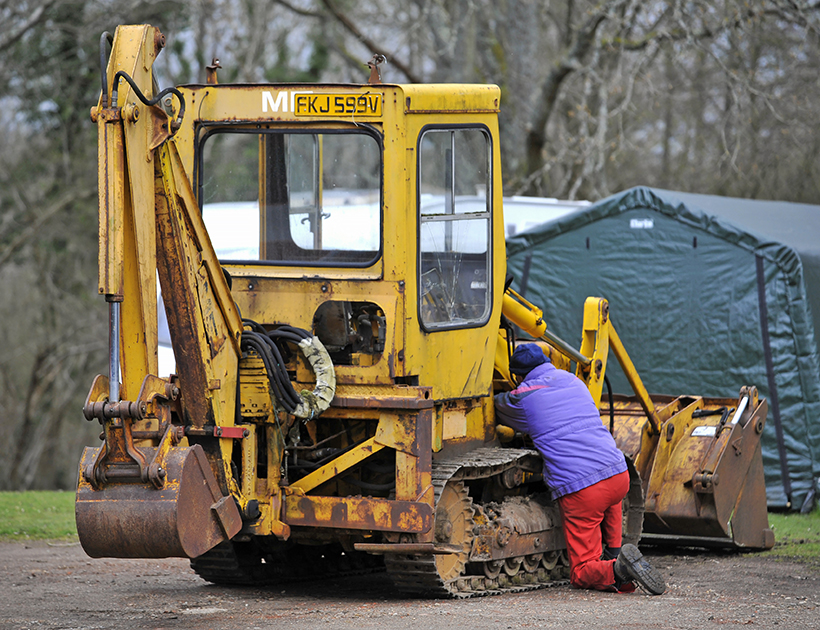 The cab is missing some glass, there are a couple more ram seals that need changing and, although there’s plenty of surface rust on show, the machine’s basic structure is solid.

“It sat, unused and neglected in the woods where, in previous years, it had worked to make tracks and level ground. Then I got the chance to buy it in 2010. I admit that it wasn’t really my cup of tea, but it was available at a good price and, at that time, it was handy because I had work for it to do in the yard outside my workshop.”

The MF 200 series of tracked loaders were based on the MF 135 tractor, and powered by the three-cylinder Perkins A3.152 diesel engine producing 44hp. The engine delivered its power to tracks (48in wide, in total) via a mechanical shuttle transmission with single lever control and four speeds. This combination delivered a forward speed range of 1.7-5.7mph and, in reverse, 1.9-6.6mph. The MF 200 could be ordered in different specifications, and Bernard’s machine features an MF 52 backhoe and a 4-in-1 bucket, for maximum, practical usability.

Narrow gauge
“The 200B runs on narrow tracks,” Bernard continued, “which is really good for road-making, but not so well suited to more general use in a wet, woodland environment; it’s far too inclined to sink and become bogged down. Nevertheless, it did a decent job for the previous owner, and then for me, and I’m pleased that I bought it. I’ve always had an interest in heavy plant and machinery of this sort, and one of my earliest work-related memories is of using a similar machines, back in the late 1960s. 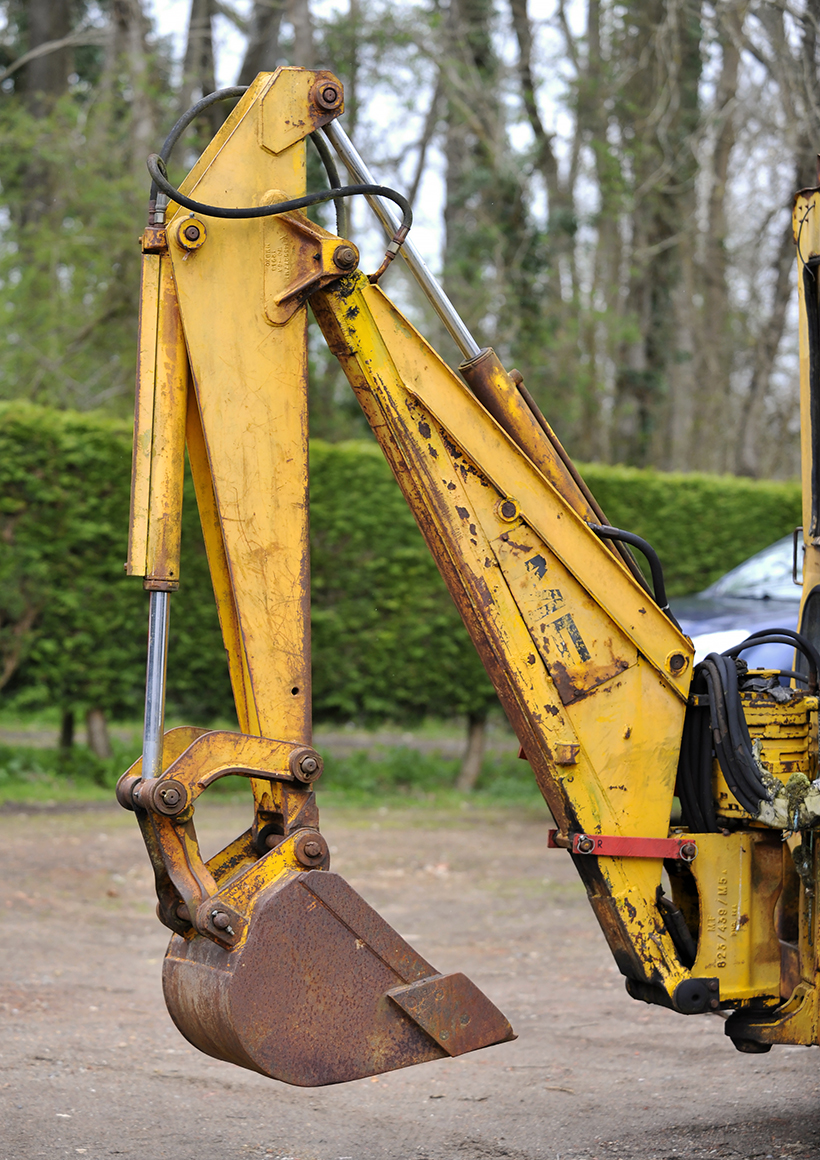 Bernard replaced the backhoe’s main ram and, although there are a couple of minor fluid leaks to be dealt with, the hydraulics work well overall.

“Of course, by the time I got my hands on this one, it wasn’t in great shape. The previous owner wasn’t terribly fastidious about routine maintenance and the machine had been allowed to deteriorate due to neglect. The most obvious problem I found was that the main hydraulic ram on the backhoe was broken, beyond repair. Luckily, I managed to locate a replacement.

“The engine ran, but not well; I had been warned about a suspected cylinder head issue, so I removed that and rebuilt it. The gearbox was fine and the hydraulics (apart from the backhoe) all worked. However, I’ve since replaced six of the hydraulic ram seals, and there are just a couple left to do. But the leaks are only minor and, as I haven’t been using it, changing them hasn’t been a priority.

“It’s a shame that I don’t use it more nowadays because it remains a very capable and useful machine. As it is, though, I’m starting to think that the time has come to move it on. It’s in decent, albeit scruffy condition, overall. There isn’t much serious corrosion to worry about and, although some of the cab glass is broken, the tracks are good (a couple of bearings were replaced recently in one of the top rollers). I also know that the previous owner had a lot of work done on the tracking gear in the past. 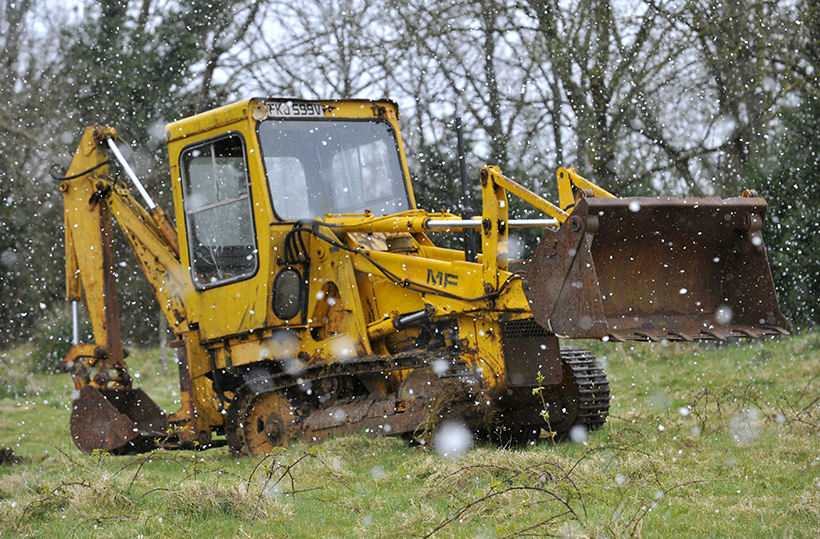 Moment’s after Bernard had driven the 200B to our photo location, the blizzard struck. You’ll have to take our word for how bitterly cold the east wind was as the scene looks pretty tranquil in this shot!

“The engine runs very sweetly now and, although I don’t know how many hours its done in total, my gut feeling is that it hasn’t been worked terribly hard over its life. As such, I think it would make the basis of a great renovation project, and I would like to see it go to a new owner who could undertake that work and would really appreciate – and use – the finished machine.

“I’ve certainly collected a lot of varied machinery over the years and, these days, I’m starting to think that perhaps I ought to start moving some of it on. I didn’t buy this machine with restoration in mind, so perhaps now would be a good time for somebody to have a crack at it. I don’t know much about the current desirability of these machines, or how the market for them has been moving in recent years, but I’d certainly be interested to hear from anyone who has a view on that, or who might like to make me an offer!”

INTERESTED IN BUYING?
If you’d like to chat with Bernard about the B200, and maybe make him an offer, then you can reach him by phone on 07710 004066, or via email to: bernardpike921@btinternet.com.

This feature is taken from the latest issue of Classic Massey & Ferguson Enthusiast magazine, and you can get a brilliant, money-saving subscription simply by clicking HERE 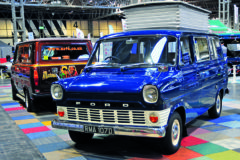 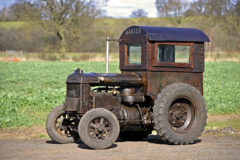