Sarah Waspe meets an enthusiast with a long tradition of farming in his family, and a liking for keeping his classic tractors working hard 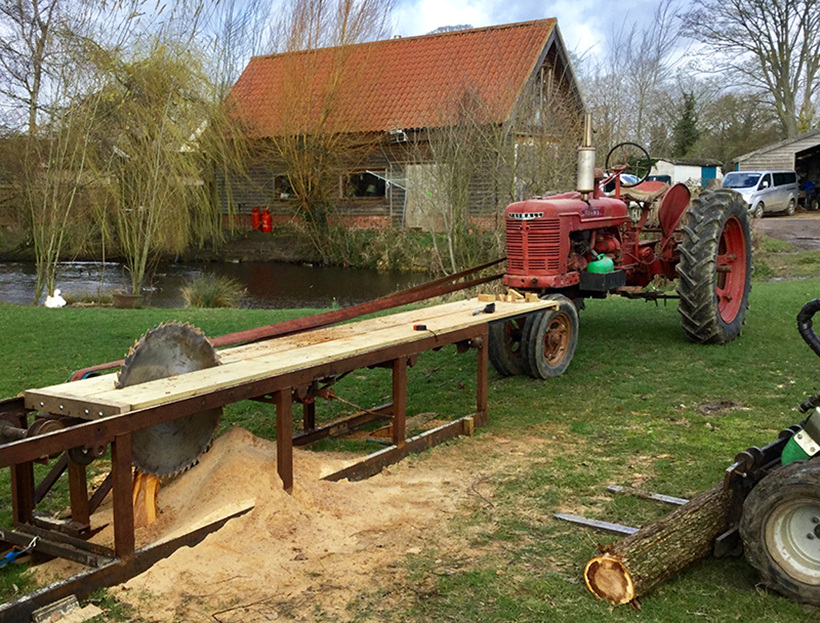 Ray Debenham still puts his Farmall H to work on the saw bench, as well as using it for other jobs around the farm.

Ray Debenham farms 90 acres of his own land in Lawshall, on the outskirts of Bury St Edmunds, and another 50 belonging to other farmers. He grows ryegrass haylage for animal feed, with barley and wheat straw being used for animal bedding.

There’s been a Debenham at Coopers Farm since his grandfather Spencer purchased it in 1933. Ray’s great grandfather, Thomas Debenham, ran a threshing business from about 1885. Although Ray said his grandmother had “more of an idea about the farming side of the business.” 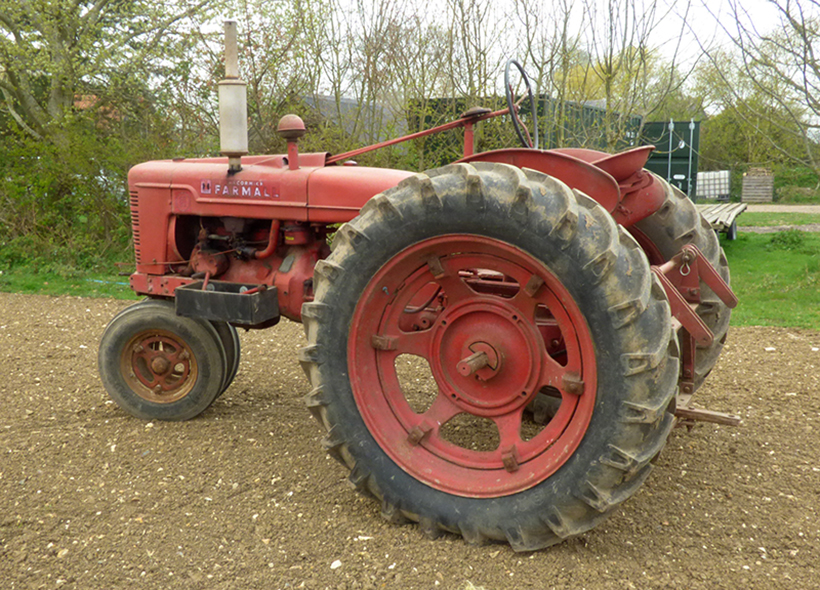 Ray likes to keep his tractors in working condition.

Ray’s Farmall H was bought at a Cheffins auction at Chilford Hall, four miles east of Cambridge. “It was a wet, rainy day an, by 3pm, most people had gone home,” he explained. “I was comfortable with the price, and didn’t feel I would lose a lot of money on it.”

A real classic
The tractor had been delivered into the UK in 1948, and dates from 1947 according to the serial number. Ray explained: “You could tell that it had been worked in the Fenlands because of the colour of the soil on it!” It’s needed little in the way of repairs – just the manifold, new gaskets and seals. He uses it on a saw bench, for harrowing, rolling and light farming jobs. 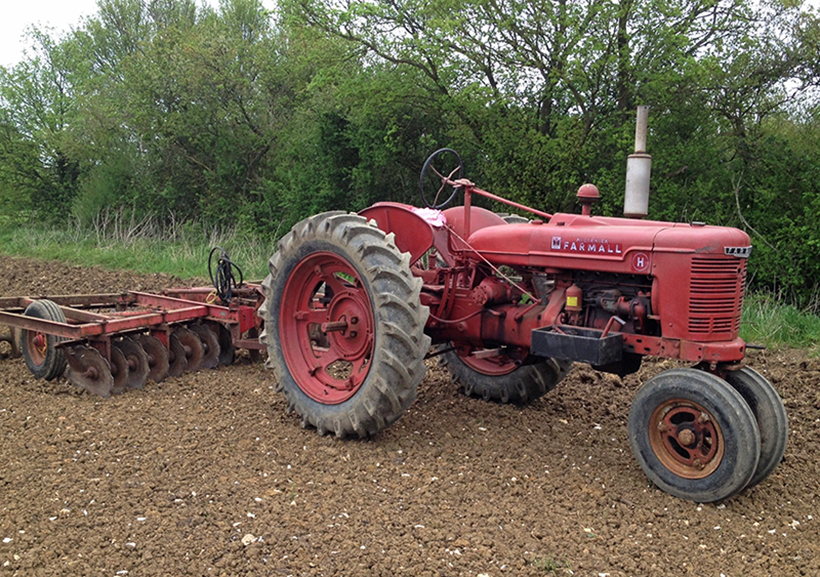 Ray says the beauty of having a pedestal front on the Farmall H is that there’s less damage to the crops while working.

Described as a fairly classic, US-style, Ray said it had originally been a four-wheel configuration. He explained: “This tractor could look more traditional with four wheels a standard width apart, or converted to have a pedestal front which is how it looks today. The beauty of having a pedestal front is that the wheels don’t run in the same place again, so don’t damage your crops. There aren’t too many of these tractors in the UK.”

Allis-Chalmers M
Ray’s Allis-Chalmers M crawler looks very much like it did when it was originally purchased. It had been repainted in the 1970s, but this has worn off. It used to belong to Ray’s father, Gerald, and before that, had been one of two crawlers that were hired out for ploughing and cultivation work by the previous owner, Mark Stanford, of Street Farm, Boxted. 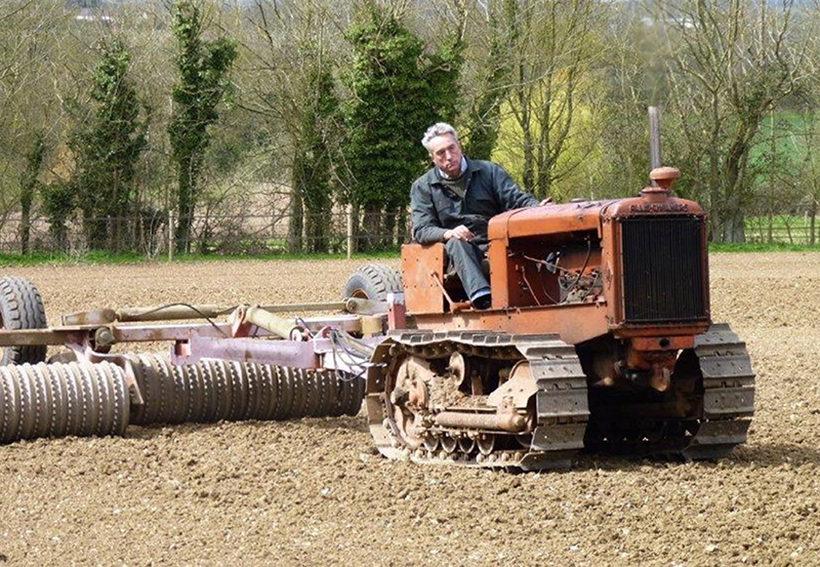 The Allis-Chalmers M crawler is ideal for jobs such as rolling.

“The crawler would travel on the roads at a speed of 4mph, similar to that of a steam engine,” Ray told me. “Wooden blocks were inserted between the cleats.” Ray had spied the Allis-Chalmers M from the school bus, and had suggested to his father that “they could do with it.” Gerald duly purchased it on October 10, 1970, for the sum of £33, at Mark Stanford’s dispersal sale. Neither Ray nor his father had driven a crawler before. 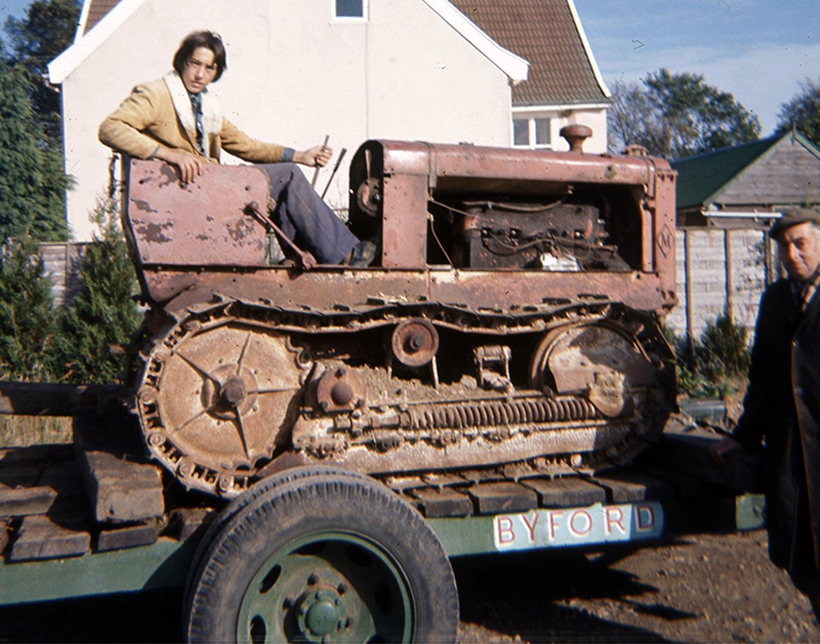 Ray with his father (right) and the Allis crawler when it arrived at Coopers Farm, c1970. The name ‘Byford’ on the side of the trailer refers to agricultural contractors in Ray’s village who kindly lent it to them for the trip.

Lend-Lease
“It makes a particular sound,” he commented, “and the petrol/paraffin (TVO) it ran on had a sweet smell.” The crawler had originally been brought over from America in 1939, as part of the Lend-Lease scheme to help with the UK food production. “Once, when we’d had a heavy fall of snow, we’d sent out a two-wheel drive tractor to rescue someone. That tractor subsequently got stuck, so we then had to send out the Allis-Chalmers M to rescue it! As there was a blizzard, a sack had to be tied to the side of the engine to stop the snow getting on to the magneto and spark plugs.”

Ray remembers riding on the back of his Smyth drill with his father, when it was used to plant sugar beet and beans. The Smyth drill was revolutionary as it was one of the first to allow the coulters and the rate of sowing to be adjusted. Ray’s grandfather bought this drill in the 1930s.

Suffolk drill
James Smyth, of Peasenhall, began manufacturing his Suffolk drill in the early 1800s. It was originally pulled by a team of three horses, with a horseman at the front and a second worker at the back who would monitor the feed mechanism. A seed hopper was divided into an upper grain box, and a seed barrel underneath sending a seeding disc to every row. Discs were surrounded by small cups which transported the seed to the coulters, via telescopic tubes. With two sizes of cup in each of the two seed barrels, the Smyth or Suffolk drill could be used to plant all kinds of seeds. Six or seven drills were produced each week at Peasenhall, but manufacture finally ceased in 1967. 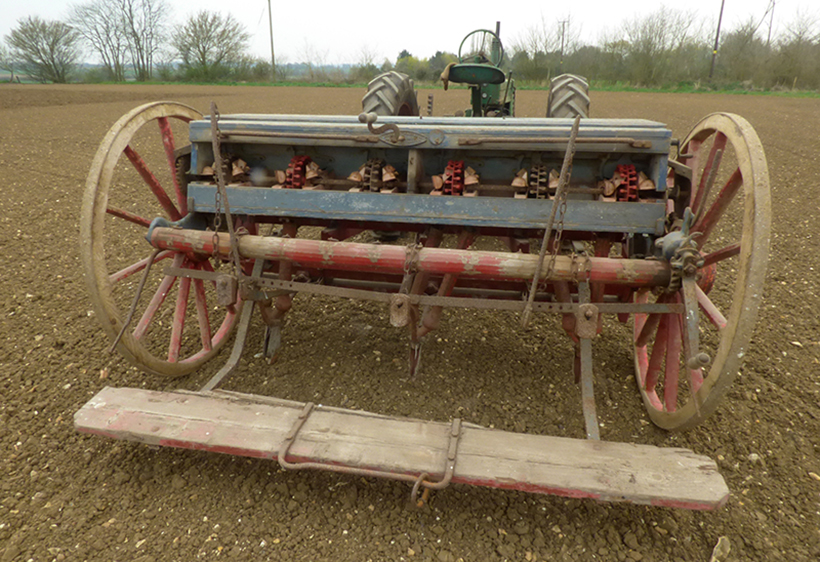 Smyth drills were made at Peasenhall for some 170 years, before the business was bought by Johnson’s Engineering in 1967. It was then acquired by Ransomes, one year later.

The 1920s brought the depression years, with grain not being grown and the need for threshing in decline. Ray’s grandfather bought a Fordson tractor and Coopers Farm in 1933, and farmed it on a subsistence basis. 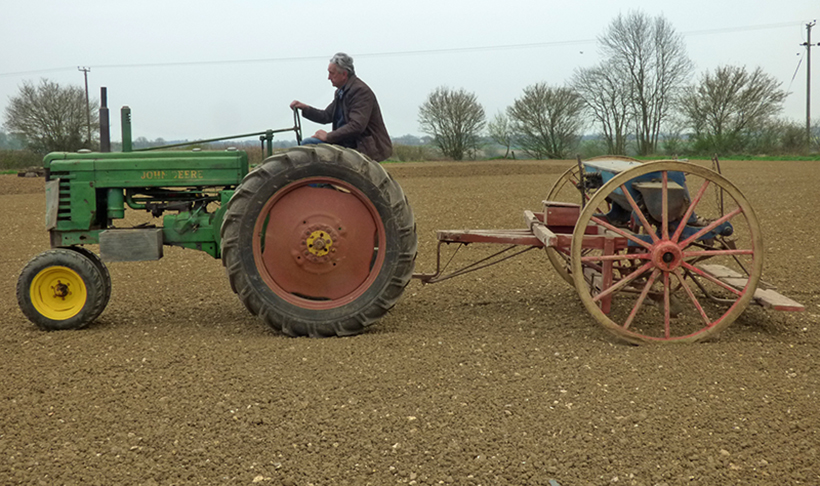 Ray remembers riding on the back of his Smyth drill with his father, when it was used to plant sugar beet and beans.

John Deere Model B
Ray’s John Deere Model B was bought at a Cambridge market sale about 25 years ago. He explained that the magneto is currently a problem, as it needs rewinding and he’ll be sending it to Burnham-on-Crouch for that to be done. He’s unsure of the exact year of production as the plate is now illegible, but he estimates that it dates from 1942 or ’43, and it’s not road-registered. 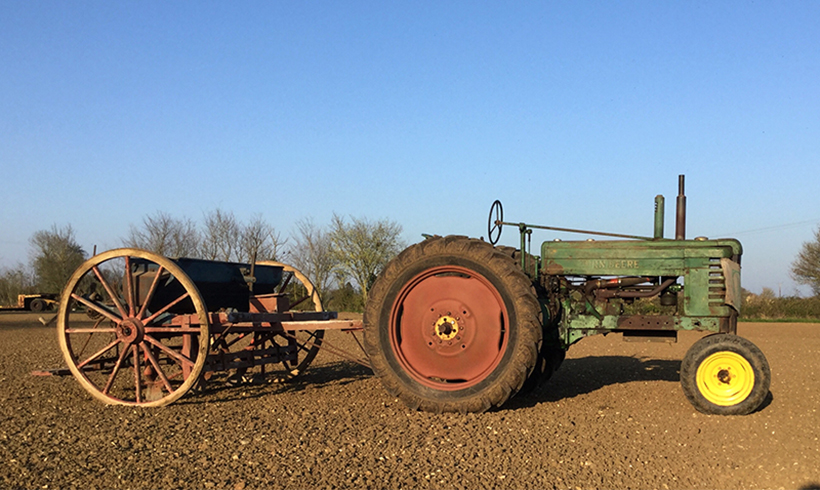 The John Deere Model B and Suffolk drill combination, resplendent in their working clothes.

From time to time, the John Deere B is used to plant maize on one acre at the farm. It also does harrowing and odd jobs. There are some things on the tractor that Ray feels should stay with it. For example, there’s a box on each side, one of which contains some old spark plugs belonging to the previous owner. “I like to keep tractors as they are,” he admits, “but maybe there will come a time when I will restore this one. I want to paint the rear wheels yellow, and ash is needed to replace the wood on the drill, as it’s looking tired.”

Background: Allis-Chalmers M crawler
The Model M was first produced in 1932, and enjoyed a production run from 1932 to 1942. Weighing around three tons, it was considered the baby of the range, and was about a quarter of the size of the Model L. 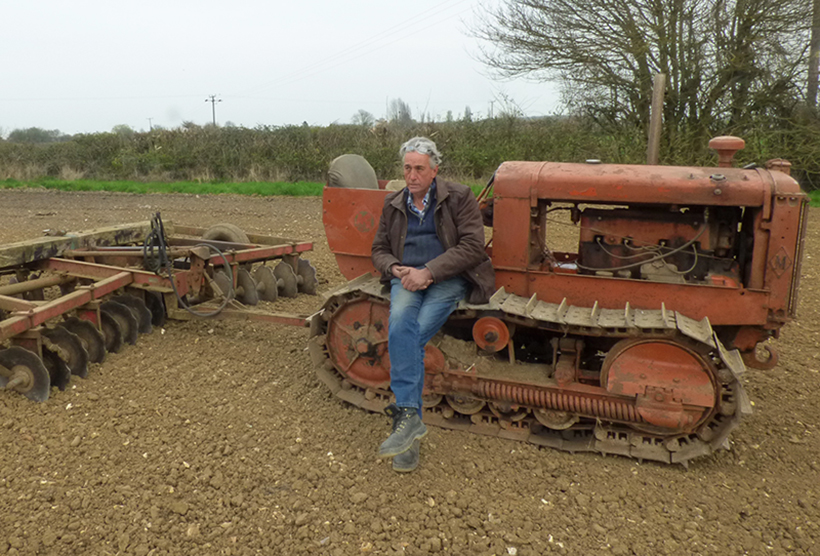 Ray takes a moment from working with the Allis M to reflect on his life with the tractors.

The 40in track version was the standard model, while a 50in version and orchard models were also available. Like the rest of the range, buying options would include a canopy or cab, electric starter and lights. The Model M also used the same engine as the Model U tractor. 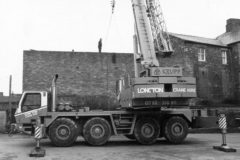 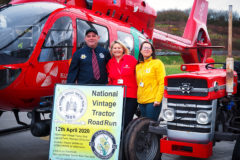