There are plenty of Ford 4000s still hard at work across the UK. The late Alan Barnes tracked down a couple of examples in Northumberland. 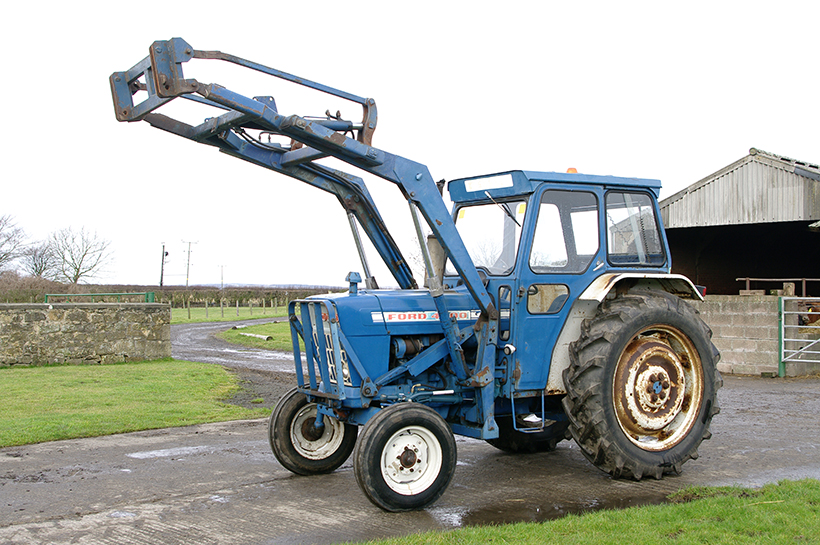 The 1972 Ford 4000 owned by Richard Holmes. He has fond memories of driving this same model when he was a young lad.

Designed to replace the ever-popular Fordson Super Major, the Ford 4000 proved to be a worthy successor, becoming one of the best-selling tractors in the range of models introduced by Ford in the 1960s.

For the Ford Motor Company, the early 1960s had been a challenging time, with the creation of a new UK production plant at Basildon plus the design and development of new ranges of tractors for worldwide appeal.

Popular new models
In 1965, the Basildon plant began the production of the new 6X range of tractors, with the release of the 2000, 3000, 4000, and 5000 models and, despite some initial problems, these well-designed tractors became increasingly popular once the teething troubles had been ironed out. As well as being built in Basildon, the range was also made in the USA and at the company’s Antwerp plant, in Belgium. 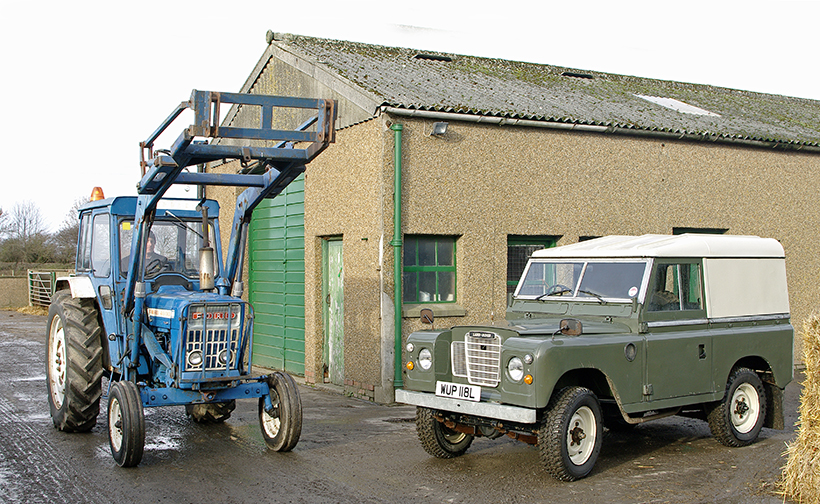 Richard with the Ford 4000 and his Land Rover. Both are still very useful around the farm.

The Ford 4000 was part of the 6X range of Ford tractors launched in the USA in the summer of 1964, and unveiled in the UK at the Smithfield Show the following December. The 55hp 4000’s three-cylinder diesel engine was paired with either an eight-speed manual gearbox, or the 10-speed Select-O-Speed transmission.

With the introduction of a new range of tractors, and the commissioning of a new factory, there were bound to be some initial difficulties but, thanks in the main to the strength of the Ford aftersales back-up service, the problems were methodically dealt with and most of the issues were resolved in good time. The 4000 proved to be a very popular machine and it eventually became the best-selling tractor in the 6X range.

In 1968, following some design changes and improvements, the 6X models gave way to the uprated 6Y series, marketed as the Ford Force range in the UK, and which was launched in April 1968. The new tractors proved to be just as popular, with the new 62hp 4000 again proving to be a powerful and yet economical machine. 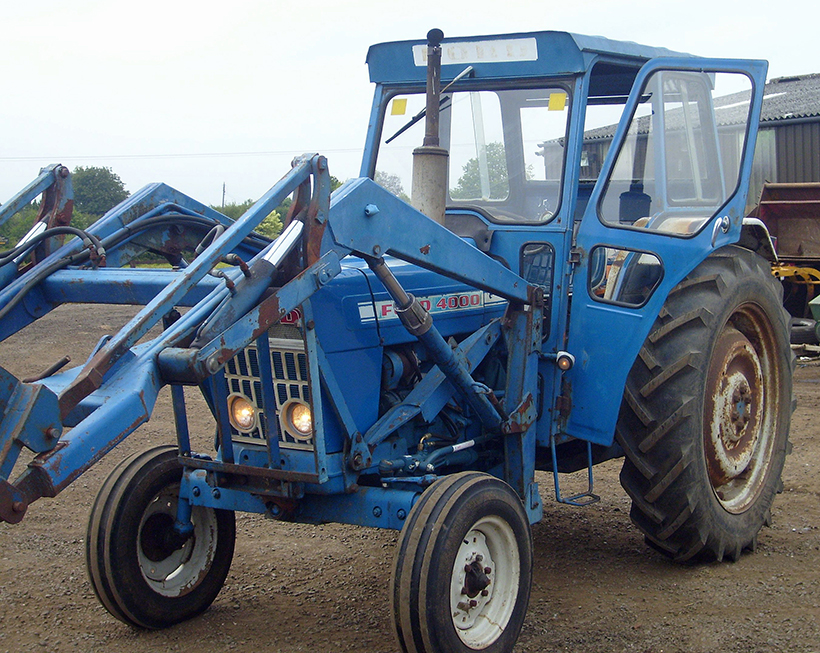 Gear options
The 6Y 4000 retained the choice of either the eight-speed or the 10-speed Select-O-Speed gearboxes, and featured an independent PTO, Category One and three-point linkage hydraulics, a rear axle with epicyclic reduction gears, inboard, oil-cooled disc brakes and a heavy, front beam axle which made the tractor suitable for loader work.

Production of the Ford 4000 ended at Basildon in 1975, with the model having been one of the most successful and best-selling machines to have been produced by the new plant. Now rightly regarded as a classic, the Ford 4000 models remain popular with enthusiasts, and many have passed into preservation. In addition, though, a good number of these rugged and durable tractors are still to be found at work all over the country.

Quite recently I came across two ageing Ford 4000s, both still gainfully employed on farms in Northumberland, and which are still highly regarded by their owners.

“It was pricey but my Ford 4000 has certainly proved to be value for money,” Richard Holmes told me. “Since I bought the tractor, apart from some work on the roof – which was shot-blasted and repainted – replacing the seat, repainting the wheels and fitting a new dynamo, the Ford has needed no major work at all”

Richard, who farms near Widdrington in Northumberland, is obviously a big fan of his 1973 Ford 4000, which he bought in the summer of 2009. “A friend of mine, Ian Muir, knew that I was on the lookout for a 4000, as this was the very first tractor that I drove when I was a young lad. He saw the tractor being advertised and although the price looked a bit steep, from the details it appeared to be a pretty sound machine. 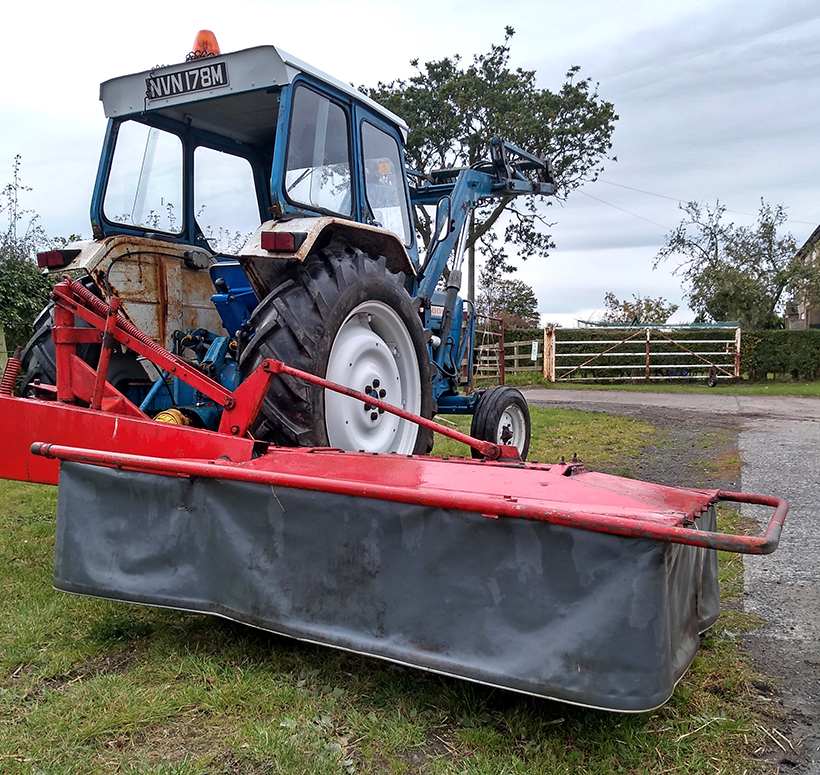 The Ford 4000 and the Bamford mower, which are used to keep the grass verges tidy around the farm. (Pic: Richard Holmes)

“The tractor was being sold by a dealer in Yorkshire and, despite the high price, Ian and I immediately made arrangements to view the machine. As we inspected the machine checking the bearings, oils, water, bodywork and hydraulics, Ian’s impression was that it was all fairly tidy. The tyres were nearly new and as soon as the key was turned in the ignition, the engine fired up with no hesitation and ran very smoothly. What’s more, the eight-speed gearbox seemed fine. Things were looking good and most of my pre-purchase ‘boxes’ were being ticked. It was really only the price, which exceeded my planned budget, that I had to consider”

In demand
“While we were inspecting the tractor, several more people arrived to look at it; the 4000 was certainly generating a lot of interest especially given that the advert had only appeared in the press the day before. The dealer also told me that the phone had been ringing most of the morning with enquiries about the Ford, and I don’t think that this was simply a sales ruse; the tractor really did seem to be in demand. Having found nothing wrong during our inspection, it was Ian’s view that the tractor was sound and worth the money, so my budget went out of the window. A deal was done and the Ford 4000 was heading home with me to Northumberland. 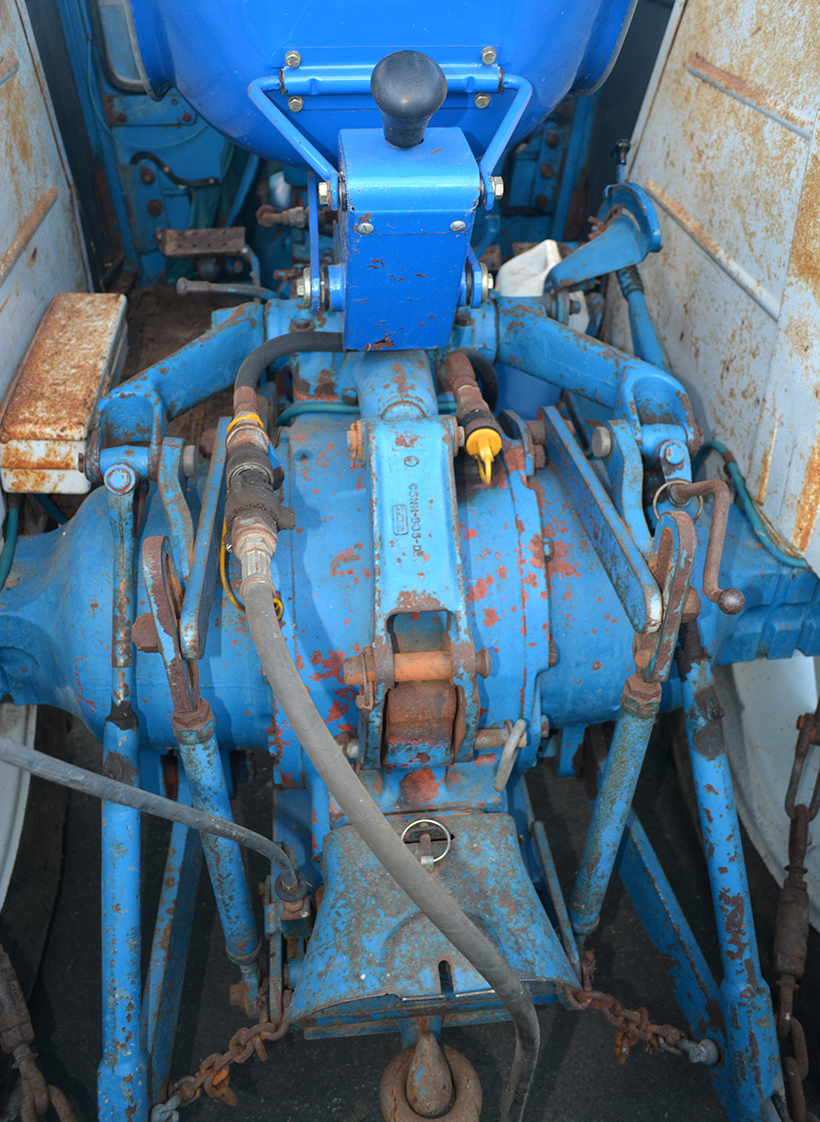 There’s some rust showing through here are there, but the 4000’s hydraulics are still in good condition.

“On the journey back, Ian and I discussed my new ‘old’ tractor and, with the price still uppermost in my mind, I mentioned that I could have picked up a 4000 for half the price without too much trouble. Ian agreed that there were certainly cheaper machines available, but added that they wouldn’t have been in as good a condition, and would have required extra expenditure to bring them up to scratch.

“If major components had to be replaced, or there were serious problems with the engine, those faults would be expensive to put right, and the lower-priced models would also probably need bodywork repairs and new tyres. We had inspected the tractor thoroughly and had concluded that I wouldn’t have to spend any more on such a straight machine. As it turned out, Ian had been absolutely correct.” 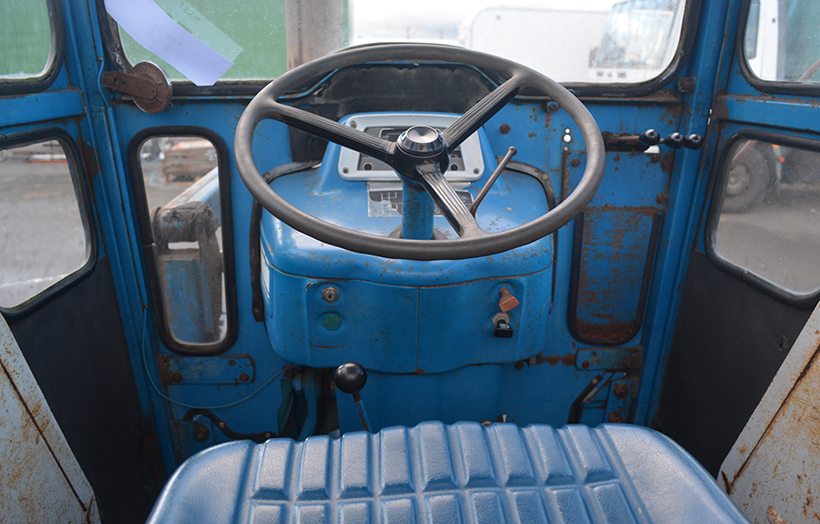 History unknown
The 1973 Ford 4000 (Serial No: B27739) was first registered in Northamptonshire, in August 1973 but, unfortunately, Richard knows nothing about the tractor’s working history. “It’s now 49 years old and although, nowadays, it’s probably a ‘third string’ machine on the farm, the 4000 is still in regular use. The tractor is fitted with a loader which is handy for moving bales and odds and ends around the farm sheds; work which it’s certainly still well able to handle. I also use the tractor with a Bamford International Type 265 twin-drum mower, for cutting the grass verges around the house, and it’s a great little runabout. 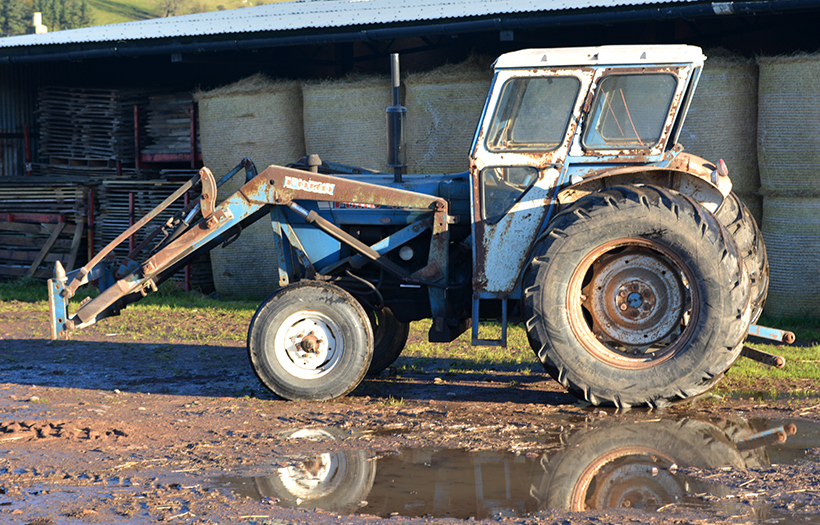 “As well as using the Ford around the farm, it’s my tractor of choice for the rallies and road runs that I’m involved with, organised by the Northumberland Vintage Tractor Club. I also use the 4000 on demonstration ploughing days. Just to add a little driver comfort on long road runs, I’ve fitted a more comfortable seat. But the only other recent repair which has been needed was the fitting of a new dynamo – that was the first time in quite a while that I’ve had to spend any money on the trusty old Ford!”

Another 4000
Some 40 miles north of Richard’s farm is the Ingram Valley, where the River Breamish winds its way through the Cheviots. The Shell family have farmed here since the 1940s, and own several ageing Ford tractors which are still in regular use as support for the New Holland machines which are now the farm’s frontline working machines. Although probably considered by many to be well past their sell-by dates, these old Fords still have their uses on the farm. 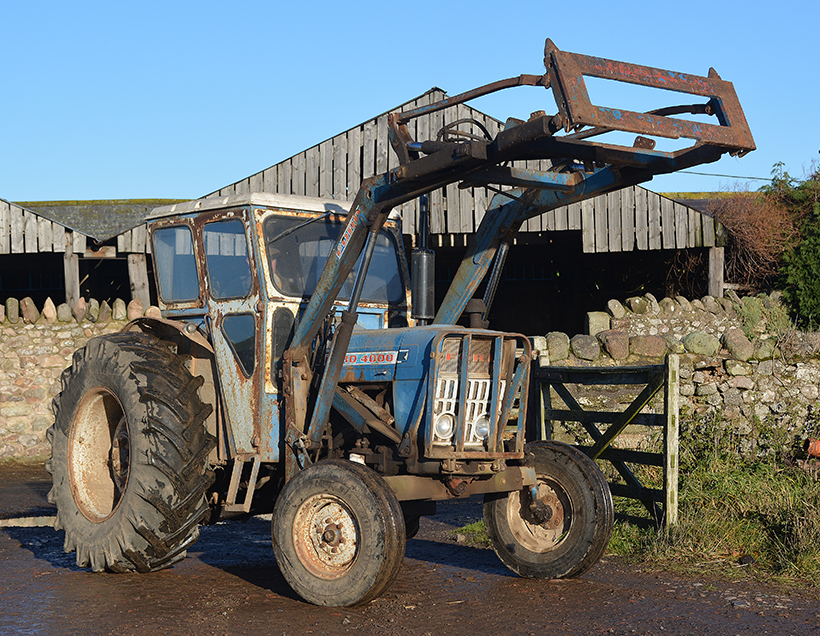 The front loader was fitted as soon as the 4000 arrived on the Shell’s farm.

Around the yard can be found a Ford 6610, a 7610, a 6600 and a 1955 Fordson Diesel Major; all are used for tackling various duties as the need arises. There’s also another veteran Ford 4000 which dates from 1970 and which was bought secondhand many years ago. Almost as soon as it arrived on the farm, that Ford was fitted with a front loader, and it’s still in place today.

The old tractor, now just over 50 years old, is by no means in pristine condition, and is very much a working machine that’s used to move bales around the stack yard, as a back-up machine. As Stephen Shell recalled: “The Ford 4000 has proved itself to be a very useful back-up machine for the first of the telescopic arm loaders which we brought for the farm and which, rather annoyingly, kept breaking down. Luckily we had the 4000 on hand to help out while the more modern machinery was being repaired, and the old tractor still provides some effective back-up for the Manitou which we use today. At the moment, there’s a problem with the water pump but, when that’s sorted, the tractor will be back in action.” 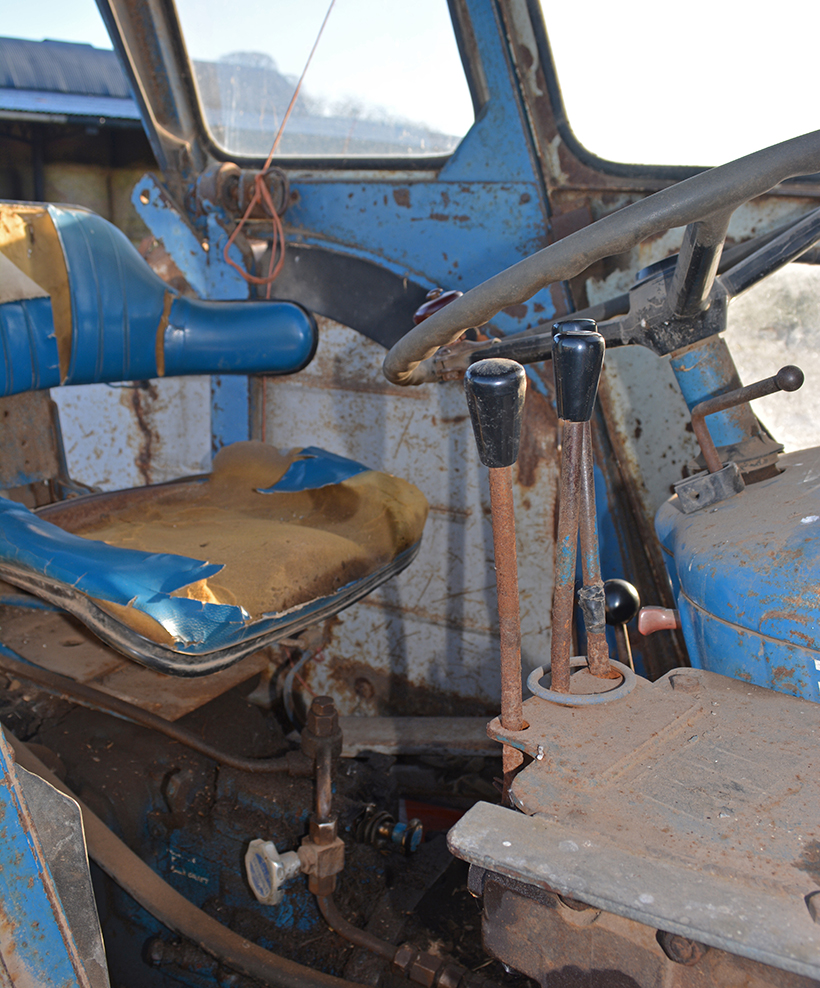 This example’s interior certainly has that ‘lived in’ look about it!

The Ford 4000 has certainly been worked hard and, although it’s mechanically sound, the condition of the bodywork and cab leave a lot to be desired; the tractor certainly wouldn’t win any prizes at a beauty contest! The interior has that ‘lived in’ look although, with its torn upholstery and rusty panels, I’m not sure that anything would want to live in it! However, as a back-up tractor, it still has a role to play on the farm, and may well continue to do so for many years to come. 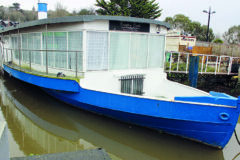 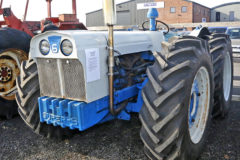