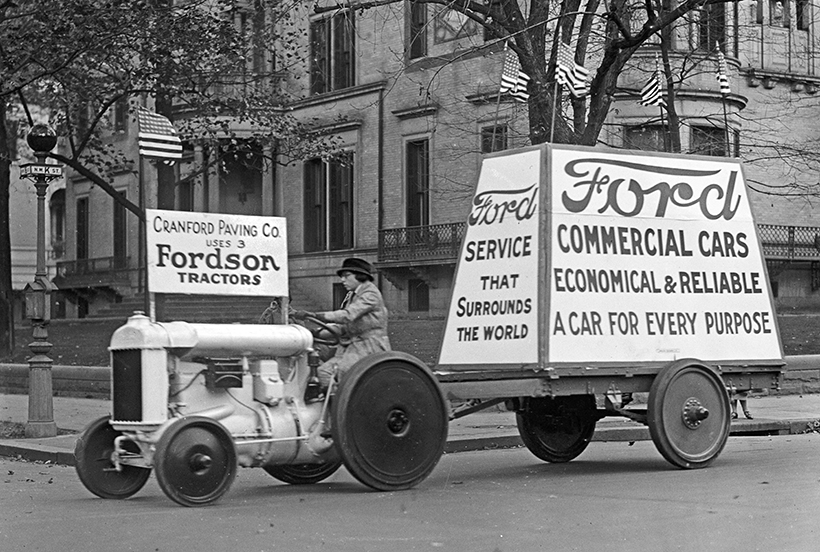 Ford’s Irish connection: A Fordson tractor, built in Cork from 1919, used to advertise the Ford Company in 1922. (Pic: Library of Congress)

In 1929, North American Fordson tractor production was transferred solely to Cork, Ireland, but this was, in fact, Henry Ford’s second Irish tractor manufacturing venture. Back in 1912, after touring Europe, Ford suggested Cork as a suitable manufacturing location to Percival Perry, head of the Ford in Britain.

Perry was more in favour of locating a factory in Southampton, and it wasn’t until the outbreak of the First World War and the food shortages of 1916, that the idea resurfaced. German submarine attacks on merchant ships lead to the British government introducing policies to encourage greater home production of food.

Official funding
Heading-up the policies was the Treasuries provision of £350,000 towards the purchase of 1,000 tractors, to be used by the Department of Agriculture and Fisheries, to implement a programme of work to optimise agricultural yield.

Ford seized his opportunity, with his Fordson tractor in production in the US; in the spring of 1917, two of his tractors were tested by the Royal Agricultural Society of England.

In his memoirs, Henry Ford wrote: ‘The situation was a grave one – power farming was scarcely known, for the English farms were not, before the war, big enough to warrant the purchase of heavy, expensive farm machinery, and especially with agricultural labour so cheap and plentiful.

Various concerns in England made tractors, but they were heavy affairs and mostly run by steam. There were not enough of them to go around. More could not easily be made, for all the factories were working on munitions. We had put together several tractors at our Manchester plant for demonstration purposes. The Board of Agriculture requested the Royal Agricultural Society to make a test of these tractors and report.’ 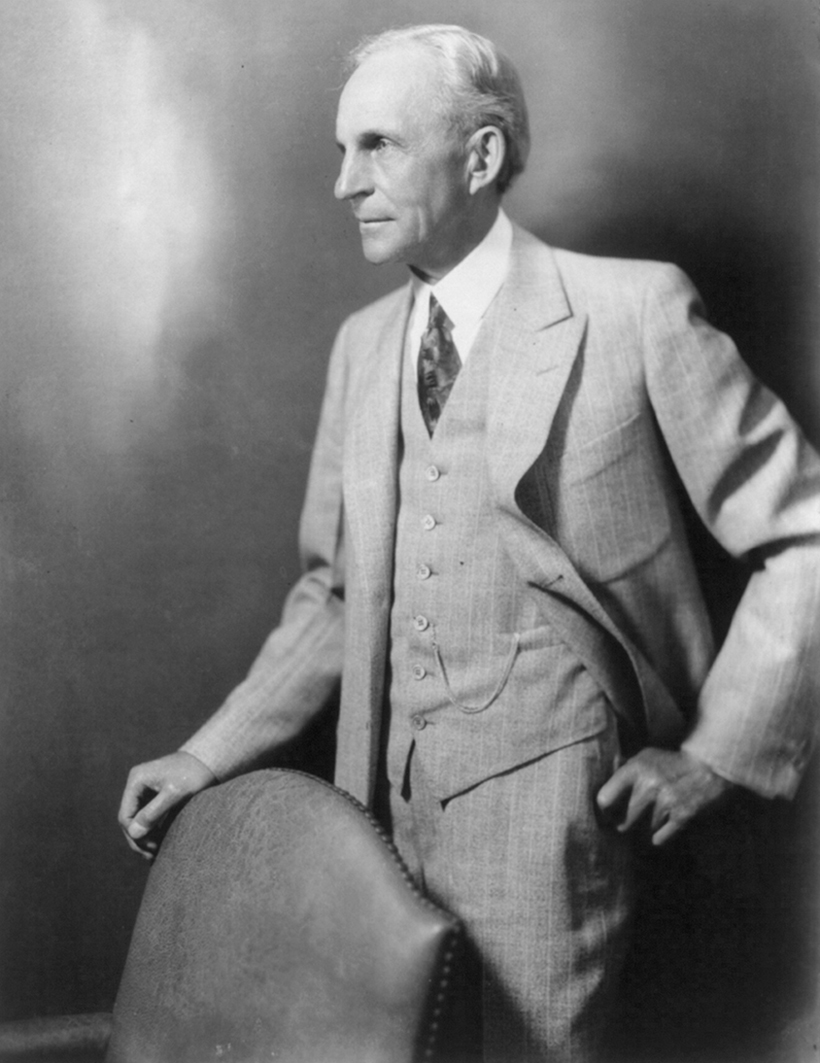 Henry Ford sat on the board of the Cork factory, together with his wife and son – Clara and Edsel – and family friend, Percival Perry. (Pic: Library of Congress)

It was pretty much on the basis of the Board of Agriculture report that the Ford Company was granted permission to erect a factory in Cork; its purpose, to produce 50,000 Fordson tractors a year.

Early suspicions
This wasn’t popular with British tractor and motor manufacturers, most of which were manufacturing munitions at the time. It was felt that allowing Ford to do this would lead to unfair competition especially as, on January 10th, 1917, legislation was passed prohibiting the manufacture of all agricultural tractors within the UK without a special licence.

In April 1917, Henry Ford & Son was officially incorporated as a limited company, initially establishing an office at 36 South Mall Street, Cork. The company’s Board of Directors included Henry and Clara Ford, their only son, Edsel, and Percival Perry as well as two other business colleagues.

For Henry – the descendant of Irish émigrés – it was the realisation of his long-stated ambition to ‘start Ireland along the road to industry’. There was also a sound, economic basis for the move, because Cork was considered to be safe from German U-boat activity. It was also the closest port to America for receiving raw materials and, as Henry Ford also mentioned in his memoirs, the workforce were used to poor wages and casual labour. He noted that Henry Ford & Son Ltd offered the opportunity to work eight hours a day, five days a week, on a minimum wage of two shillings and threepence an hour, or five pounds a week.

A 1917 survey of just over 1,000 working class Cork families found that 35% of them survived on less than 19 shillings a week, so it’s unsurprising that Ford’s plans for a new factory were extremely welcome.

A 136-acre site – ‘the marina’, the former location of the Grand National Steeplechase racecourse and city park – was purchased for about £21,000. At the time, Cork was part of the United Kingdom of Great Britain and Ireland, so any vehicles or parts manufactured there could be imported into the rest of Britain without incurring a 33.5% UK import tax (The McKenna Tariffs), which had been introduced on various luxury goods in 1915. 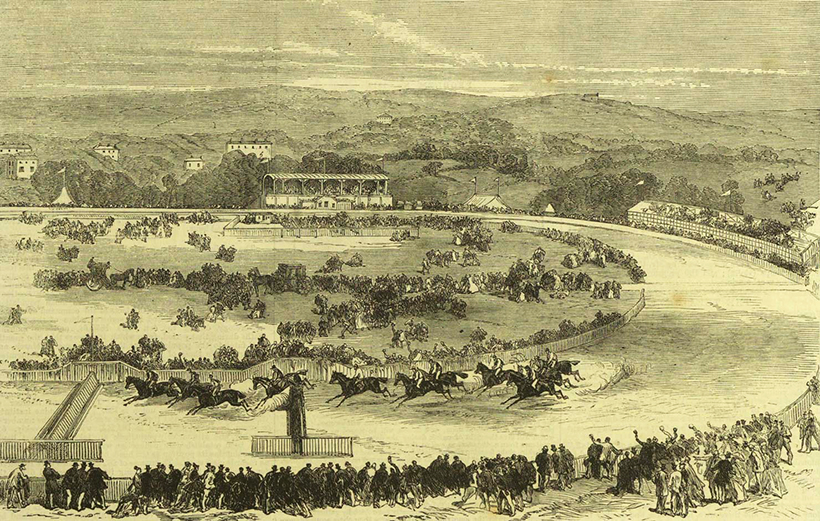 The Grand National Steeplechase Racecourse at Cork was the site chosen for the Ford plant. (Pic: Illustrated London News, May 29, 1869)

Building begins
Construction of the new factory began in June, 1917, and took almost two years. But all the Fordson tractors provided to the British government during WW1, were actually built in Dearborn, Michigan, then shipped to the UK.

Finally, on July 3rd, 1919, the first tractor rolled of the production line in Cork. Contemporary reports describe a huge, state-of-the-art factory, its machine shop with a glass roof covering an acre, a power-house, assembly unit, new wharfs and an iron foundry. The building covered a floor area of just over 7.5 acres, and employed 1,800 workers who worked a 44-hour week, including Saturday mornings.

However, by December 1920, the Ford Motor Company was in trouble. Overproduction of cars and a slowing market had led to serious cashflow problems. Alongside this, expected increases in demand for tractors had failed to materialise, and the tractor market was oversupplied. The Cork factory produced just 303 Fordson tractors in 1919 and then, in 1920 – the plant’s first year of full production – only 3,626 rolled off the production line.

Harsh measures
But, in an effort to weather the 1920s depression, and to enable loan repayments, Henry Ford cut his company to the bone, making redundancies, selling equipment and offloading old stock. As a consequence, Ford’s tractor venture in Cork also suffered.

Edward Grace had replaced Percival Perry as managing director of the Cork plant in 1919, but the problems continued mounting. As well as falling sales, the Irish War of Independence started in 1919, creating a backdrop of fear, violence and uncertainty, and Grace was forced into making harsh decisions regarding the plant’s future.

What’s more, European countries introduced tariffs and currency restrictions that meant it was no longer economic to produce tractors at Cork. In fact, it was cheaper for European distributors to ship them in from the States.

However, Grace realised that although it wasn’t cheaper to produce parts in Cork, it was cost-effective to send them from Cork to Britain. This was particularly so for cast-iron car parts for the Manchester plant.

In 1921, just 1,433 tractors were built in Cork followed, in 1922, by 2,233. Those figures weren’t good enough and, on December 29th, 1922, the end of the line was reached, and the 7,605th tractor became the last Fordson F produced at the Cork factory. Afterwards, all the plant machinery and equipment was  dismantled and shipped to Dearborn.

For the next few years, the Cork factory became an assembly plant, producing cars for the Irish market. Additionally, up until European Model T production ended in 1927, it also manufactured various components and supplied Trafford Park and Continental Ford Plants with engines and rear axles.

That the factory continued to operate at all after formation of the Irish Free State, in 1922, is probably testament to Henry Ford’s desire to support the economy of Cork, because it didn’t really make sound business sense.

Tax pressures
With Cork no longer part of the UK, there was a 22.22% import tax levied on parts produced there for UK operations, but Ford was determined that most parts used at Manchester would be made in Cork.

It’s clear that, as about 15% of the workforce in Cork was employed by the Ford Motor Company in the 1920s, any closure would have had a devastating effect on the local economy. During the second half of the decade, decreasing farm returns sent the US agricultural market towards depression, and the rest of the country soon followed, culminating in the 1929 Wall Street Crash.

Ford decided to suspend farm tractor production early in 1928, but this decision was short-lived. The mechanisation of Soviet agriculture led to increased demand for tractors which, combined with demand for spare parts, prompted Ford to reopen the Cork factory. Production restarted in 1928 and, for a time, the Cork plant was the only Ford factory in the world making tractors. Ford’s engineers had designed an improved version of the Model F, simply called the Fordson Model N or Standard, production of which started with serial number 747682.

New model
The Model N featured a new ignition system to replace the old Model T coil, the engine cylinder bore was increased by 1/8th of an inch to give more power but, by far the most noticeable improvement was the new cast front wheels, which had five holes in them instead of spokes. 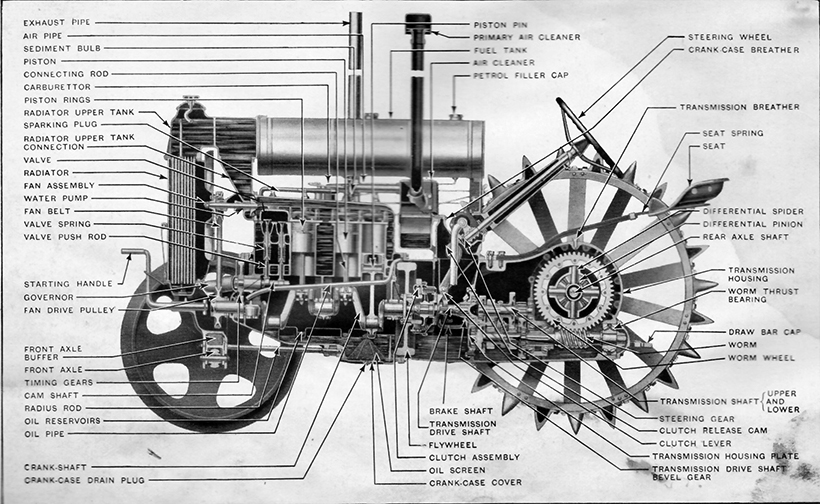 Production of the Fordson Model N started in Cork in 1929, and continued until 1945. This is a mid-production cutaway of that model.

However, the early 1930s saw the Cork factory battling the depression as well as the economic battle between Britain and the Irish Free State. In 1932, production of tractors was transferred to the Ford plant in Dagenham, Essex, and many workers opted to keep their jobs by leaving Cork and moving to live near the Dagenham factory. Consequently, this plant had the nickname ‘Little Cork’ for a few years.

Tractors dating from 1932-‘33 are referred to as ‘transitional models’ because, during that period, a few hundred Model Ns were made in England, using Irish castings. Also, Fordson tractors had been painted grey with red wheels but, following the move to Dagenham, the colour scheme was changed to a new, dark blue livery, and radiator side panels had ‘Fordson’ cast into them. They can also be recognised by the ‘Ford Motor Company Ltd., England, Made in England’ wording that’s stamped on the fuel tank. Serial numbers of Model N tractors are usually found at the front of the cylinder block, on the right-hand side.

In Ireland, Ford’s Cork factory remained operational and  manufactured cars until 1984. The famous Ford Prefect was built there, as were Escorts, Cortinas and, finally, the Ford Sierra.

You can subscribe to Ford & Fordson Tractors magazine by clicking here 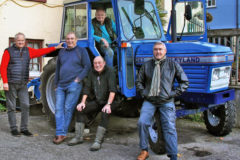 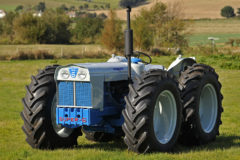