Tony Hoyland spotlights one of the most successful lines of tractors to come out of the John Deere stable; the two-cylinder Model B. 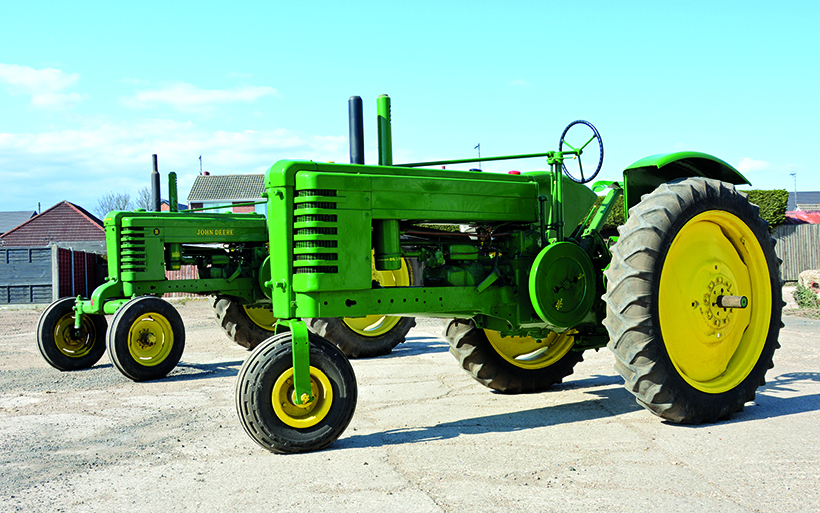 Two-cylinder Model B: John Deere Model BW and BN; both variants of the Model B, which was the company’s biggest selling tractor.

For four decades, from 1918 until 1960, John Deere became famous not only for its ubiquitous green and yellow livery – which still exists today – but also for its tractors powered by two-cylinder horizontal engines.

Popping Jonnies!
So successful were the ‘Popping Jonnies’ during these years that, when their reign was over and they were to be replaced by the ‘New Generation of Power’ range in 1960, the company received ‘rivers of tearful mail’ from the public. Some even thought that the change would mean the end of John Deere! 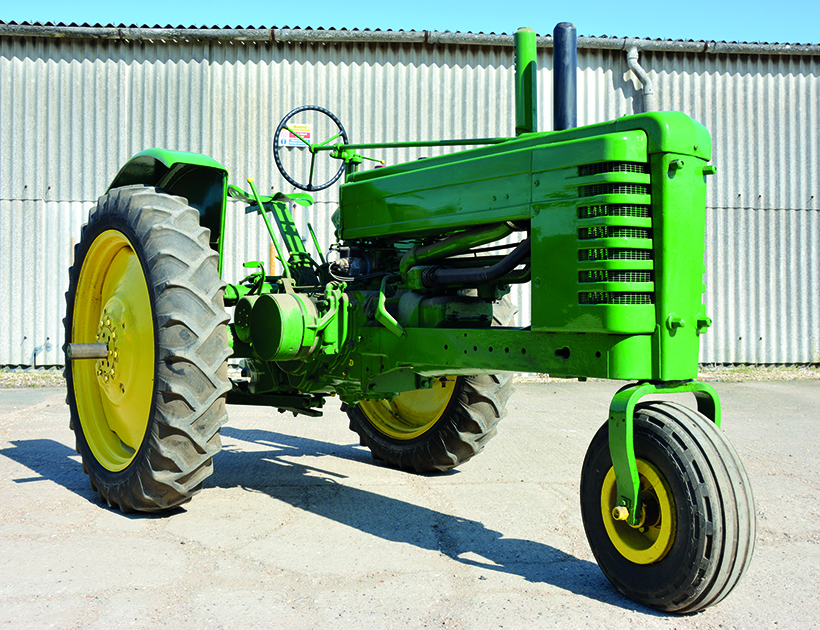 The belt pulley is mounted directly on the crankshaft, so the full power of the engine is delivered to the belt.

What then was the secret to the success of those two-cylinder tractors, remembering that it was this breed of tractor (from the Waterloo Boy to the end of the Letter Series), that saw the eventual transition from horse power to horsepower?

There was, and still is, much to admire. First, the two cylinders logically meant fewer moving parts than in engines with more cylinders. As a result, there were fewer parts to wear, require adjustment, repair or eventually replace. Each part could be larger, heavier, more rugged and so able to stand up under long hours at full or three-quarter load. 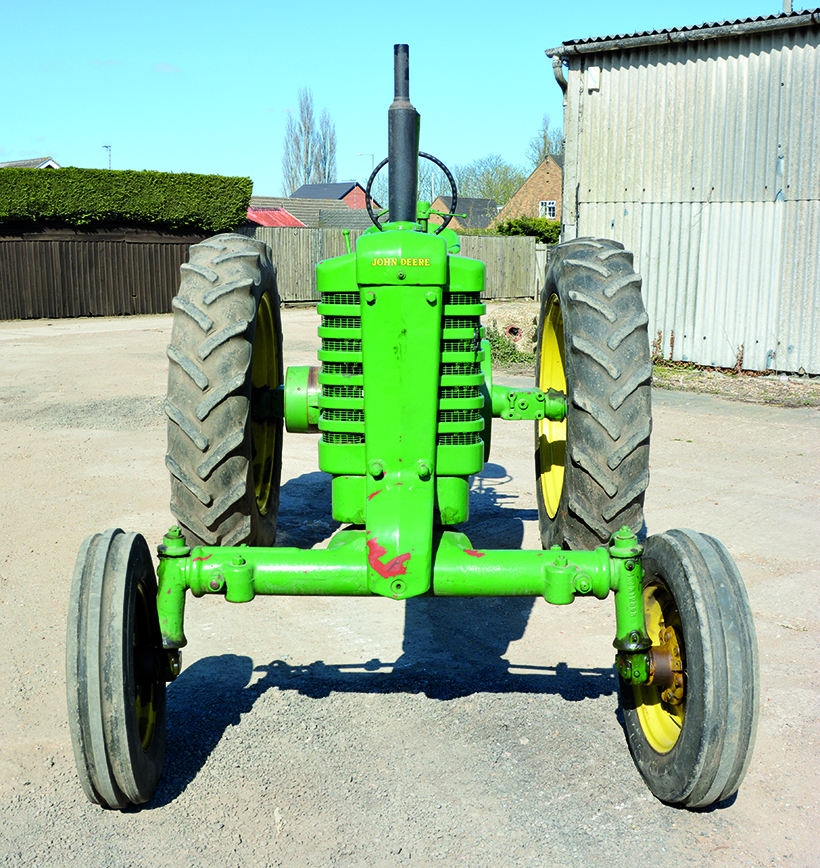 The Model BW configuration allowed front and rear wheels to run in the same tracks.

Easy maintenance
For the farmer, this would make the engine easier to understand, service and repair himself. The parts were easily accessible and easy to handle because of their larger, physical size. All these factors added to the John Deere reputation for dependability.

The two-cylinder engine was also compact, and mounted so the crankshaft was crosswise to the chassis (forming an integral part of the chassis). The belt pulley was mounted on the end of the crankshaft so power could flow directly from the engine to the belt-driven machine. 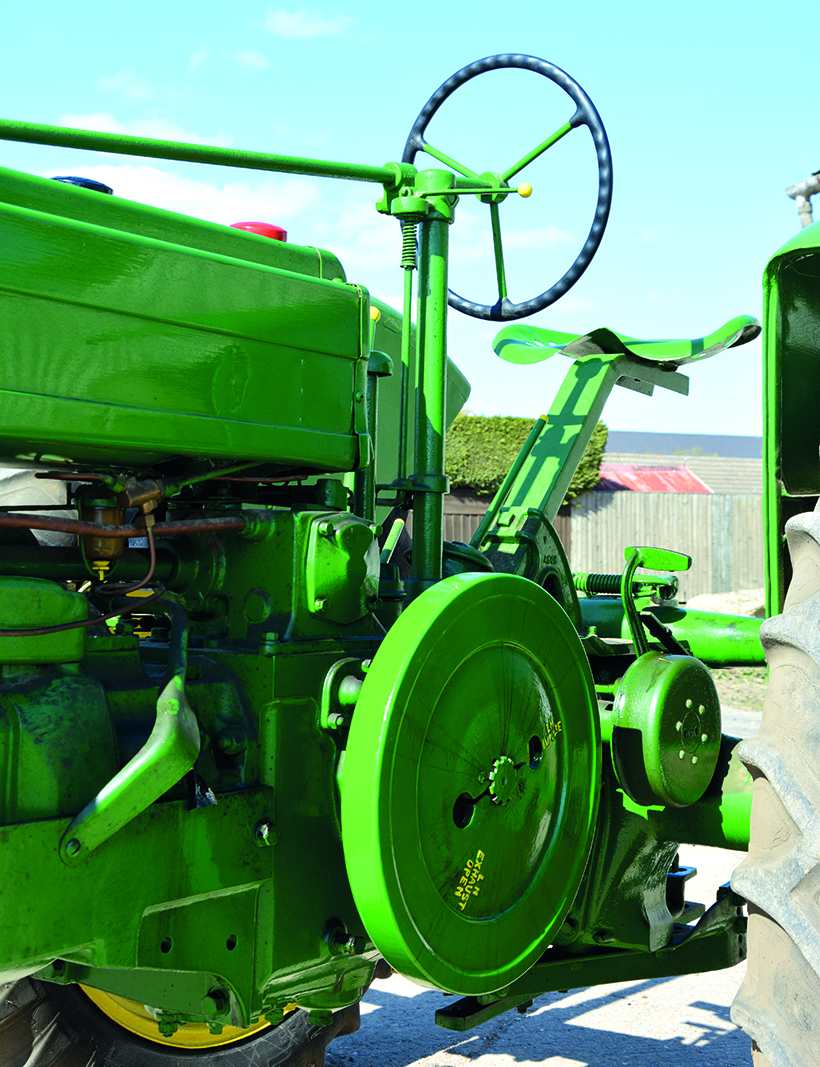 Also, thermo-syphon cooling eliminated the need for a water pump, and the engines would burn low-cost fuel – such as distillates – and various fuel oils. All these things added up to one vital thing during the times of the Great Depression – economy.

These engines were rugged but were by no means crude and, throughout the years of their production, they were upgraded (together with the tractors) to gain more efficiencies. However, the writing was on the wall when the constant demand for power outstripped the physical limitations of the engine. A two-cylinder engine with enough power to meet this demand would have meant far too big a tractor to work between the rows. 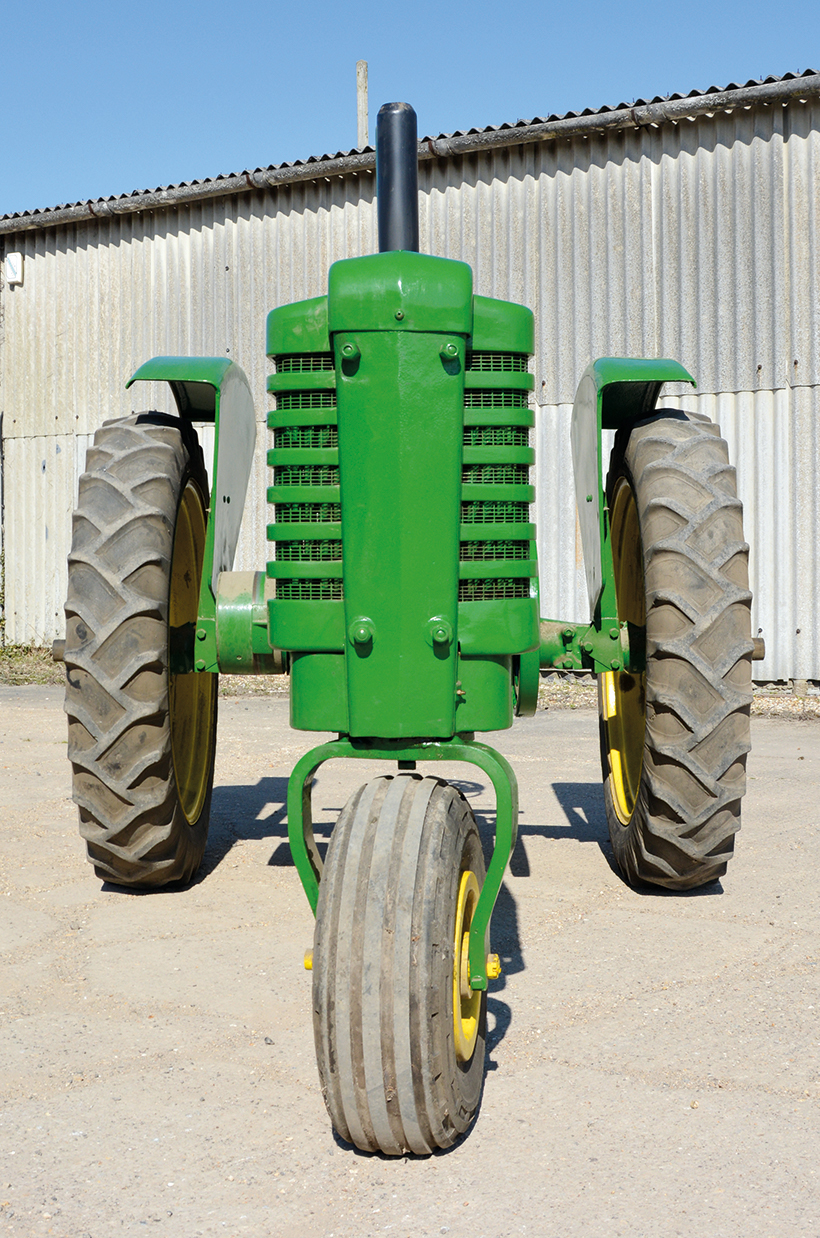 The narrow radiator and tapered fuel tank gave excellent views to both sides of the tractor.

Fitting accolade
Talking of power, now’s the time to introduce the tractors featured here – both part of the Model B range. In their promotional material, John Deere describes the Model B as, the ideal tractor for farms where the power requirements are not great enough to justify the purchase of the larger Model A or G. It is also ideal for use as supplementary power on farms of considerable acreage where a larger tractor is already in use.

The Model B was John Deere’s all-time bestseller, with some 300,000 tractors being sold between 1935 and 1953. It was advertised as being two-thirds the size of the Model A, and with a daily work output the equivalent of a team of six to eight horses, it was classified as a ‘one-plow’ tractor. As the Model B evolved over its production run, it could be generally classified as ‘unstyled’, ‘styled’, and ‘late-styled’ versions. 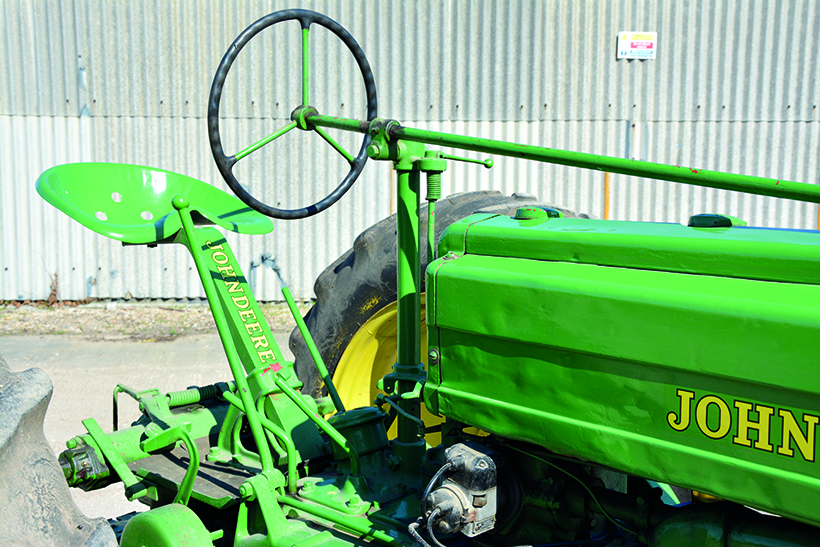 Nice to see some patina on the tinwork; signs of this Model BN’s working life.

Variations of the tractor were also produced to meet farming needs. The Model B came with a V-twin wheel tricycle front. The Model BN had a single front wheel, while the BW had an adjustable, wide front end.

Reader’s tractors
The Model BN and BW featured here both belong to John Geelhoed. They are both Lend-Lease tractors and are ‘styled’ versions carrying the six-speed gearbox. His father had driven a BW back in the 1970s so, when this tractor came up, John made the trip to Scotch Corner to make it his own. Sadly, not much else is known about the BW, apart from the fact it had been used on the farm from where he collected it, for many years. It’s a similar situation with the Model BN, although the serial plate can be distinguished and dates the tractor’s manufacture to c1944. 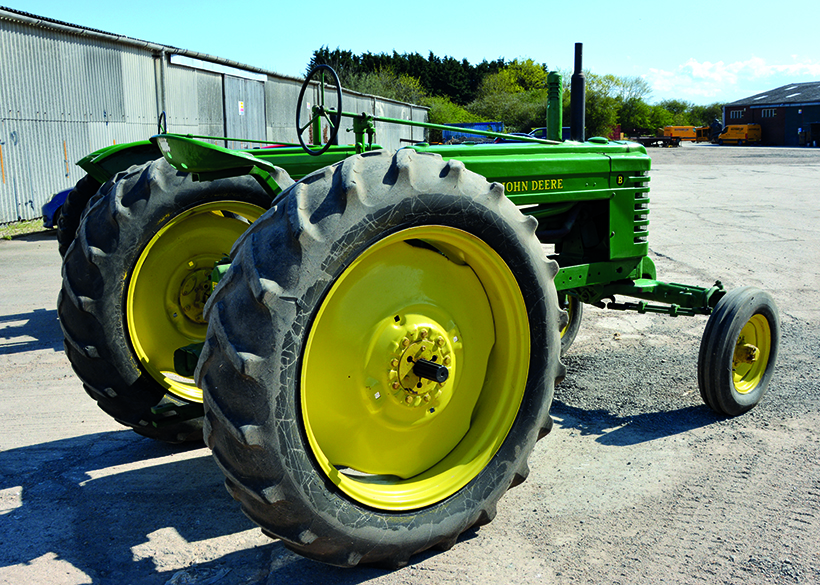 Rear wheels are adjustable for any width between 56 and 84in.

New York industrial designer, Henry Dreyfuss, is responsible for the restyling of the Model B tractor, and it was the first in its range of John Deere ‘styled’ tractors to be launched in 1939. It boasted not only a new, streamlined style, but also a boost in power because of an increase in bore and stroke.

Glowing testimony
Over a century ago, John Deere established the policy of the organisation that bears his name today, when he said: “I’ll never put my name on a product that hasn’t in it the best that’s in me.” 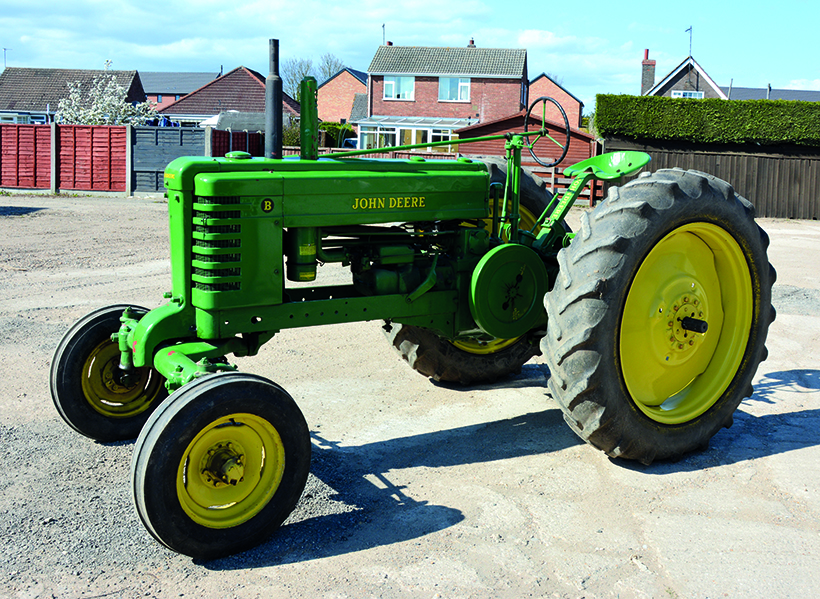 The memories of John’s father inspired him to track down a John Deere Model BW.

The massive success of the two-cylinder tractors is testimony to the team working behind the scenes, and that sentiment cannot be put in more eloquent words than those of the dedicated John Deere marketing team at the time. ‘In the huge John Deere Tractor Factory at Waterloo, Iowa, that same principle of quality manufacturing is put into practice by men and machines you may never see, but men and machines that work for you, designing, manufacturing and inspecting modern, quality-built John Deere two-cylinder tractors.

‘Out in the field, designers are constantly working out refinements and improvements. At the proving grounds, engineers are subjecting John Deere tractors to the most gruelling tests to learn how to build them better. 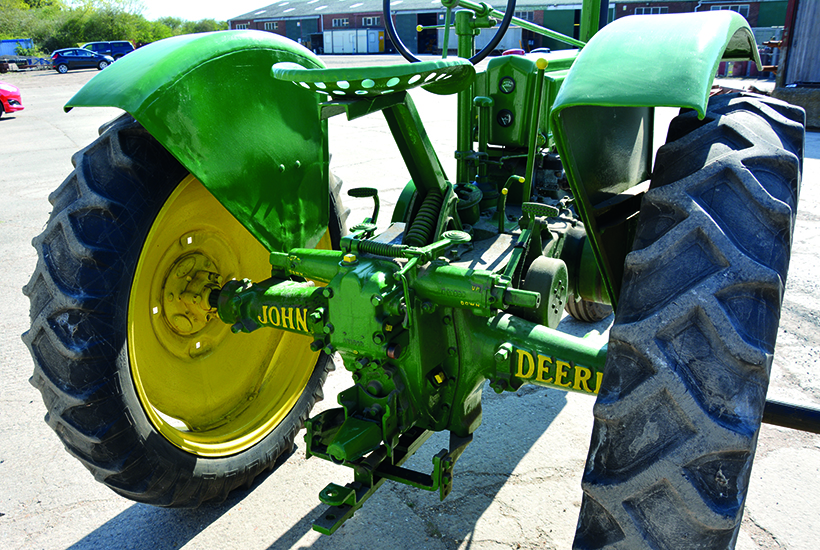 The roomy platform enables the operator to sit or stand, and all controls are within easy reach of the operator from the tractor seat.

‘In the drafting rooms, men spend their lives making certain that the design of each part is correct in every respect. Pattern-makers take up the job where engineers and draftsmen leave off. Men who specialise in metallurgy specify and test the materials to be used. Skilled workmen, using the most modern machines, turn out parts to exacting specifications. Keen-eyed inspectors, with the aid of the world’s finest precision checking instruments, see that tolerances are held down to microscopic dimensions. 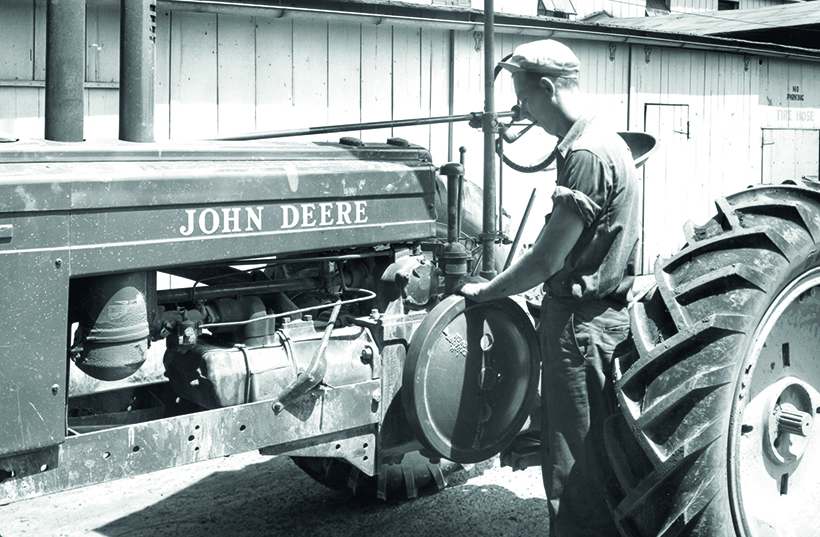 Adjustment points on the Model B were easily accessible – most of them from a standing position. (Pic: John Deere Limited)

‘It’s this rigid policy of building only the best for sale at a fair price, that has resulted in an ever-increasing preference for John Deere tractors among farmers who know that real tractor value is not determined by the purchase price alone, but also by operating costs, maintenance costs and the length of time a tractor continues to give satisfactory service.’ 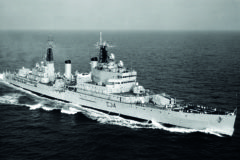