Sixty years ago, if you needed a stable tractor that could pull through on hilly ground, whatever the weather, then the County Super-4 was the machine for you, as Jonathan Whitlam explains 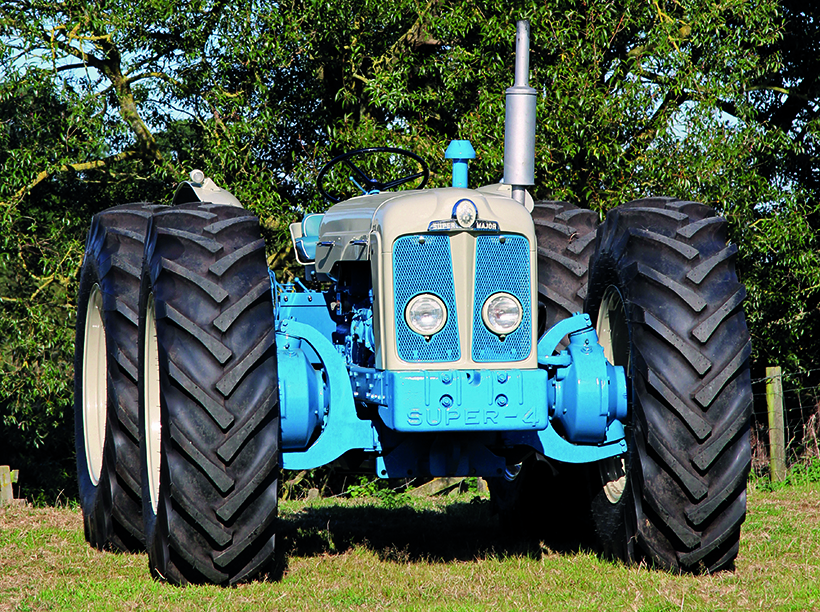 A late-model County Super-4 in preservation, showing the classic, equal-size wheel lines of this iconic model.

Just over 90 years ago, County Commercial Cars was formed. The company was based in Fleet, Hampshire, and began by converting Ford trucks to take larger and heavier loads by fitting extra driven and un-driven axles.

The business grew and, after the Second World War, it began converting Fordson tractors into crawlers. This became the core of the firm’s future; producing crawlers for agricultural and industrial use was the mainstay of the business into the 1960s. But it also continued to produce conversions of the Ford Thames Trader and D Series trucks, plus a four-wheel-drive version of the Ford Transit.

Not a crawler
Crawlers were superb in tough conditions, where a traditional wheeled tractor simply couldn’t operate. They were kinder on the soil, too. But the drawbacks with these machines was that they couldn’t be driven on tarmac roads without damaging the surface, and they weren’t particularly fast! 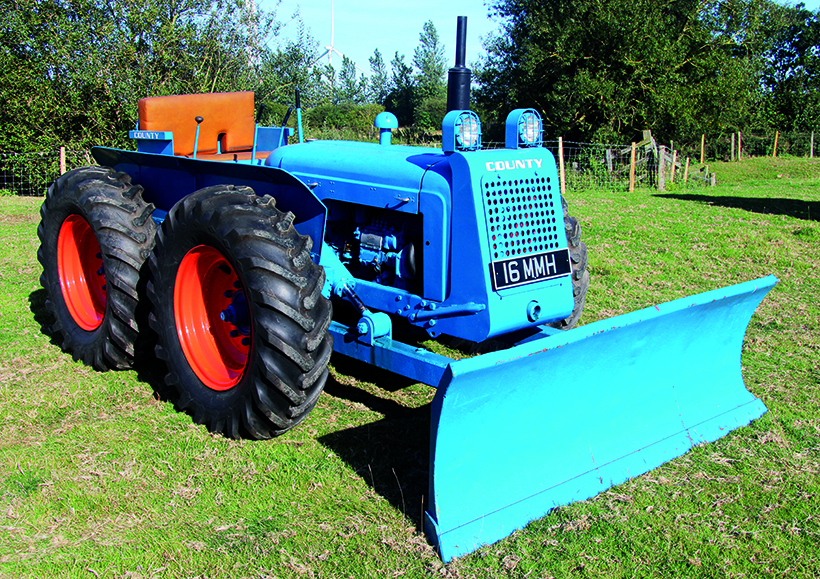 The County Four-Drive took the County crawler version of the Diesel Major and fitted wheels instead of tracks to form a basic, 4WD tractor using chain-drive and skid steering.

It was the demand for a tractor with the tractive abilities of a crawler, combined with the faster road speeds of a wheeled tractor, that prompted the development by County of the Four-Drive, designed and produced with the sugar cane industry firmly in mind.

The Four-Drive, launched in 1954, was essentially a crawler fitted with four, equally-sized wheels instead of two sets of steel tracks. By this stage, County was producing its crawlers on the Fordson Diesel Major skid unit, and this same unit was used for the new 4WD machine. With chain-drive, it delivered true 4WD and, for steering, the crawler principle was used – the same, tall levers were used by the driver to change direction, the tyres skidding round as the levers on one side braked them. This principle worked well enough as the flex in the tyres allowed them to skid around adequately. However, prolonged use on concrete surfaces perhaps led to excessive wear in some circumstances. 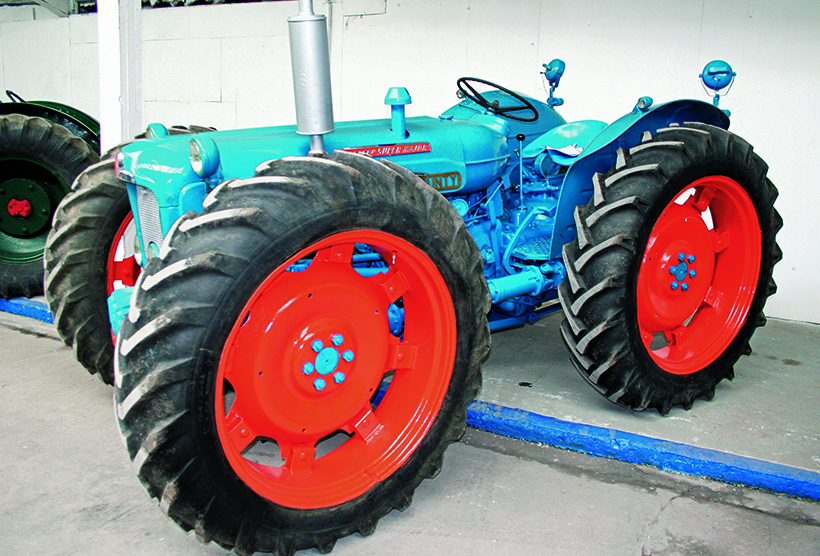 This preserved County Super-4 in Ireland has had an extra pair of headlights mounted to the top of the bonnet.

Most Four-Drive tractors were exported, fulfilling their initial design brief for sugar cane haulage in several countries. A few were sold in the UK – mainly for industrial applications – but the machine wasn’t a success on the home market. Production continued into the Power Major era from 1958, and small numbers were produced for export into the 1960s.

However, County had an ace up its sleeve as, while still producing the Four-Drive, it was working on a much more flexible type of 4WD tractor. This machine would go on to enjoy huge success, and form the basis of County tractors for the rest of the firm’s existence. 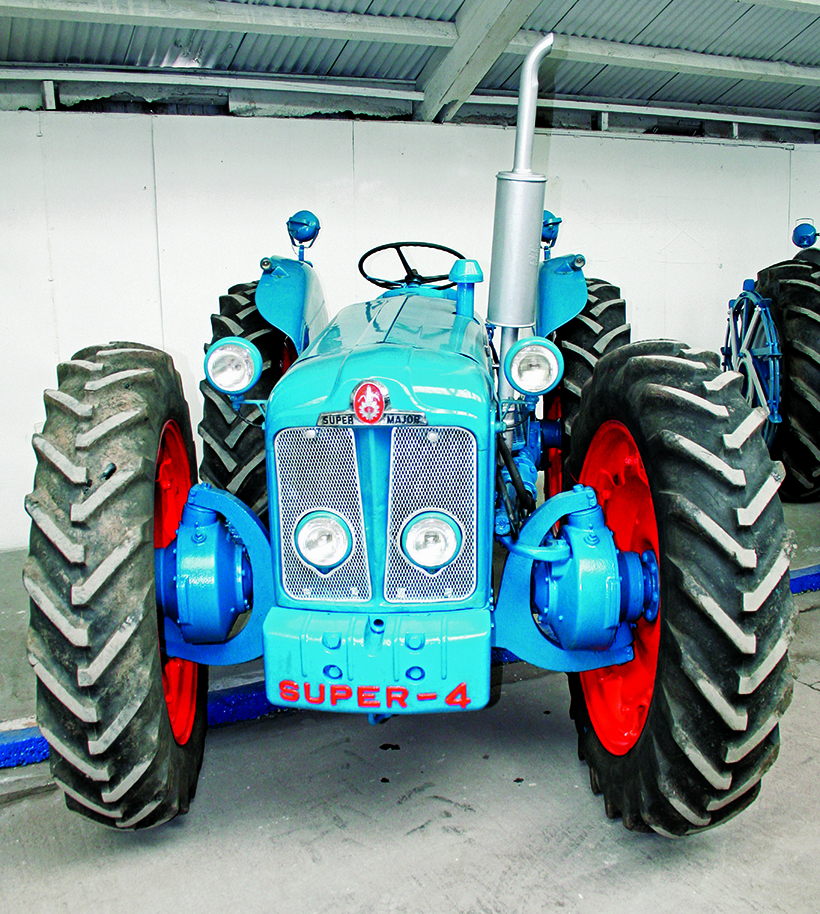 An under-beam-type front axle was designed for the Super-4, with large pivot points provided for the hub casings to be housed.

Super development
The new County 4WD design continued to use the Power Major skid unit in prototype form, before production versions were made on the Super Major skid unit introduced in 1960 – the year that saw the new County Super-4 launched. County had gone back to the drawing board, and produced a tractor that still used equal-sized wheels. But the power was transferred to the front wheels by twin prop-shafts down each side of the machine. This allowed the differential lock of the Super Major to be retained, with this feature now working on all four wheels instead of just the two rears.

The twin prop-shaft design was one thing, but the brand new, heavily-built front axle was something else. This allowed a low centre of gravity while putting weight firmly on the front end of the tractor, thus counteracting the heavy implements being used on the rear. The result was a very well balanced machine that could pull like a train with more traction than the 52hp of the four-cylinder Ford engine fitted in the Super Major would suggest. 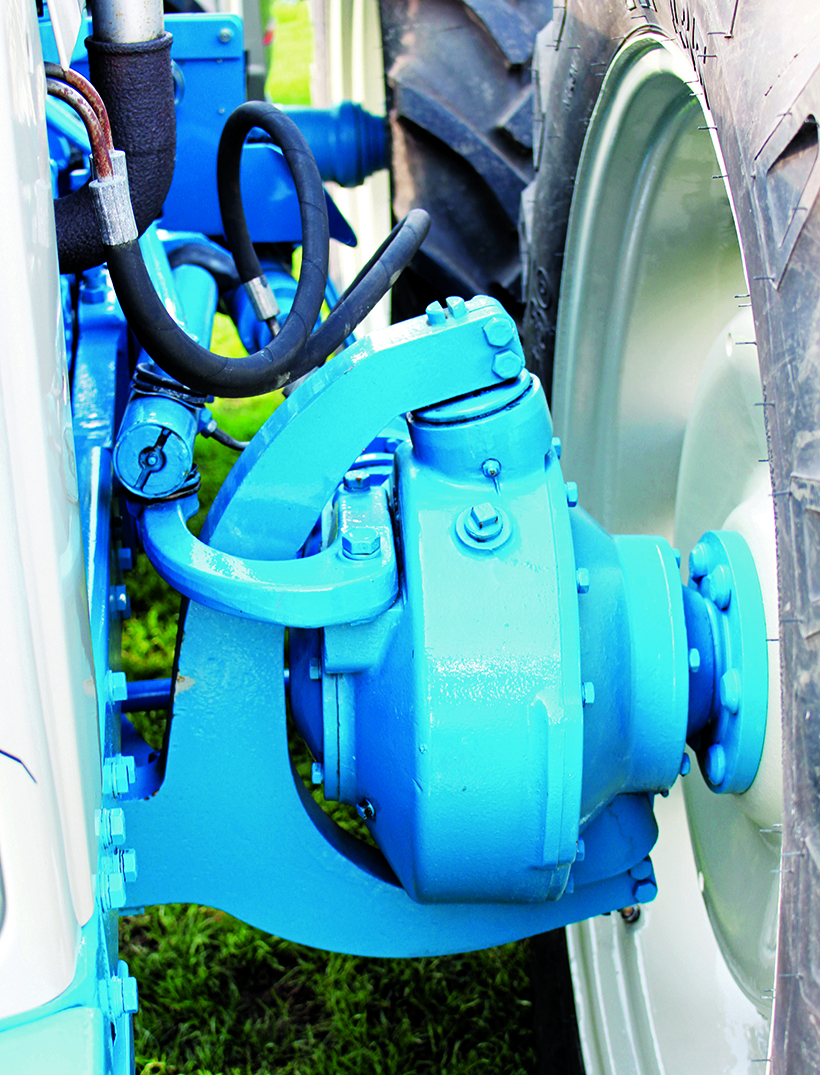 Limited turning
A downside was that the big wheels and axle geometry meant that the turning circle of the Super-4 was very large. There was no way this tractor would turn within its own length on the headland of the field, but at least power steering was fitted as standard! This wide turning angle was a small price to pay for all that added traction, and the Super-4 was soon being snapped-up by farmers and contractors who required more traction to operate heavy implements, often in tricky working conditions.

I can’t imagine the impact the launch of the Super-4 must have made on the farming community back then. The new Fordson Super Major in factory spec was seen as a large machine by many farmers, many still preferring the much smaller and lighter Ferguson tractor and its Massey Ferguson successors. 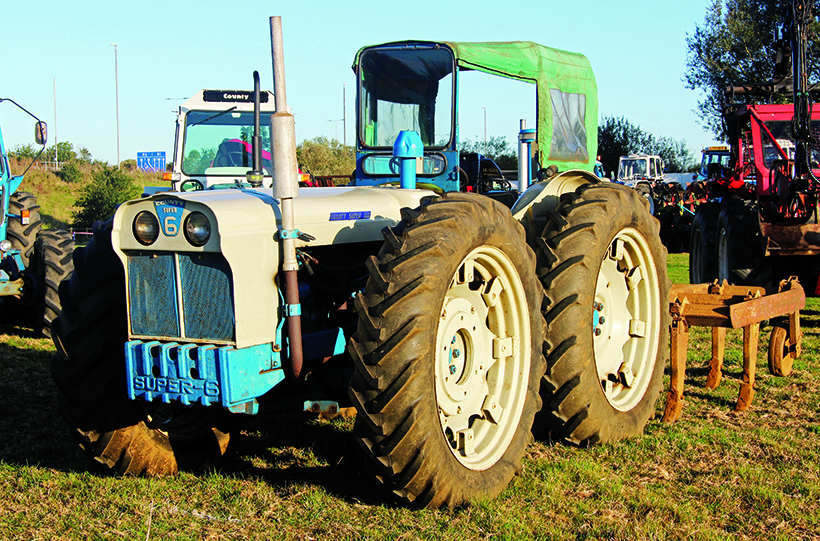 The Super-6 took the design of the Super-4 and up-sized it! It featured a new, rather severe-looking nose cone instead of the normal Fordson item.

As a 2WD tractor, the Super Major was an accomplished performer, and suited the needs of those working large farms pretty well. Then County released this amazing, 4WD version, with the front wheels just as large as the rears! It must have looked mighty impressive just sitting there, let alone when put through its paces.

Those large wheels all-round, with the familiar Fordson Major bonnet appearing to sit low between them, certainly gave the impression of a very capable machine. The driver, once seated, could look down the bonnet flanked by those large front wheels, and easily conclude that this new tractor was completely unstoppable. 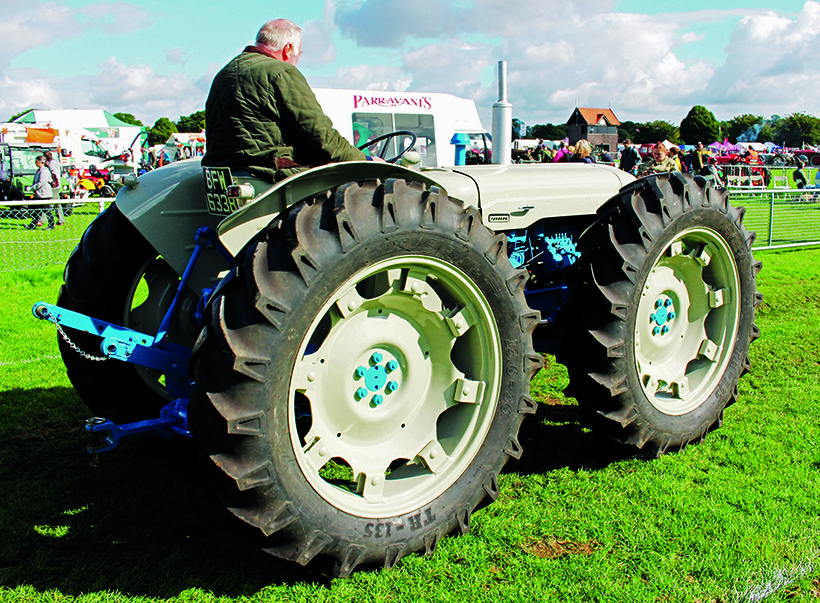 This side view of the Super-4 shows the short wheelbase; another feature that contributed to this model’s superb performance on hilly ground.

More power
Despite the huge traction offered by the Super-4, County realised many users required more power, and very quickly the Super-6 joined the original tractor on the price list. Based on the Super-4, the larger newcomer utilised a 95hp, six-cylinder Ford industrial engine, and new tinwork was incorporated to cover it. This made the Super-6 look very distinctive, thanks to a completely redesigned front nose cone.

The Super-6 was a powerful machine that found favour with many farmers and contractors as it had enough power and traction to carry on working when most machines simply couldn’t turn a wheel. Production of both versions continued after the change to the New Performance Super Major, in 1963. 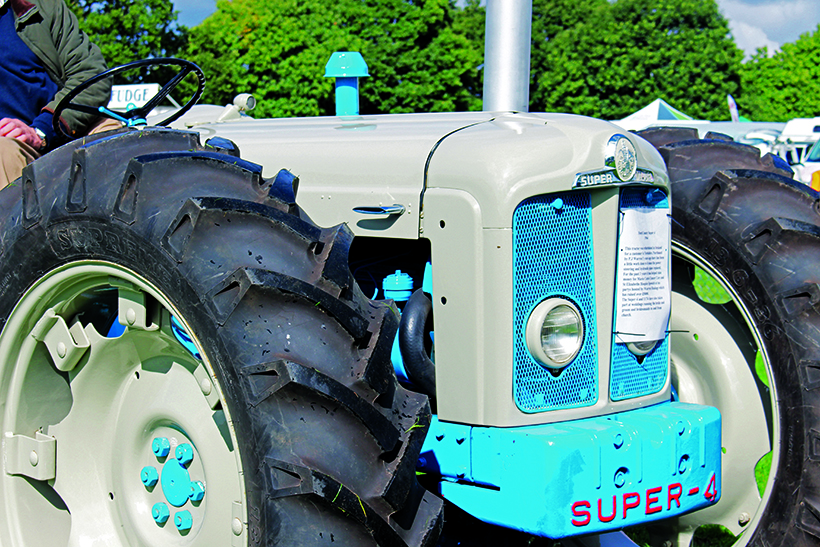 With Super-4 proudly displayed on the front, the Fordson bonnet sits snugly down between the front wheels.

Another use for the Super-4 was as the basis for other manufacturers’ machines, in the form of loading shovels produced by British- and European-based firms. These were formidable loaders featuring the equal-size wheel, 4WD Super-4 skid units, and proved popular for many applications.

New horizons
Six-cylinder power was seen as the way forward as time passed, although four-cylinder tractors were still offered. From 1964, County adopted the new Ford skid units coming out of the Basildon factory, to carry on producing the Super-4 and Super-6 tractors, but this time also with a model number added. 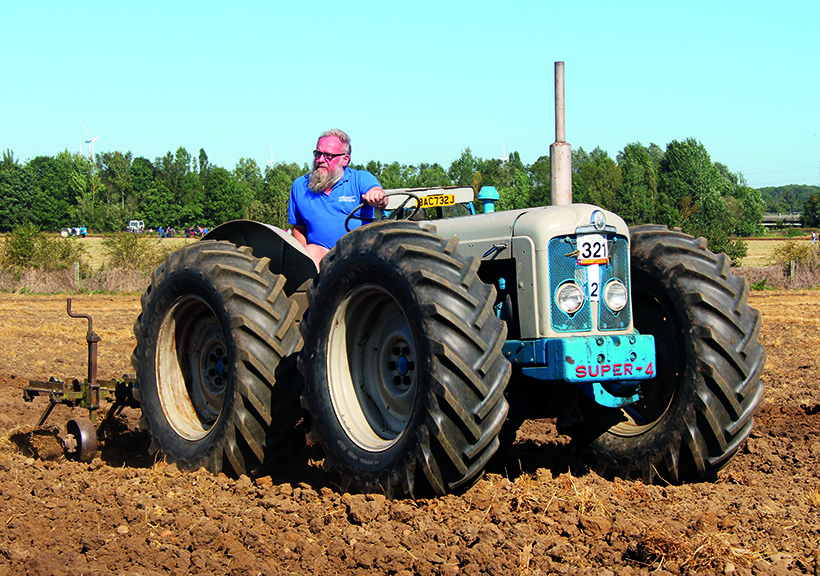 With Winsam weather cab fitted, this Super-4 looks stunning competing in a ploughing match in Sussex.

Power increased and new models were introduced with new model numbers, but the Super-4 and Super-6 names remained for some time. All these new tractors also featured the same County front axle and twin prop-shaft driveline design. This would remain a constant as power increased during the 1970s, with the design being tweaked to strengthen it, but otherwise remaining basically unchanged.

An interesting development of the Super-4 and Super-6 platform was the forward-control tractor. This placed the driver’s cab ahead of the engine and front axle, allowing room at the rear for the fitting of tanks, hoppers or even spray tanks. These machines soon found favour with agricultural contractors, and for industrial tasks, taking the County equal-size-wheel tractor concept into even more areas of success. 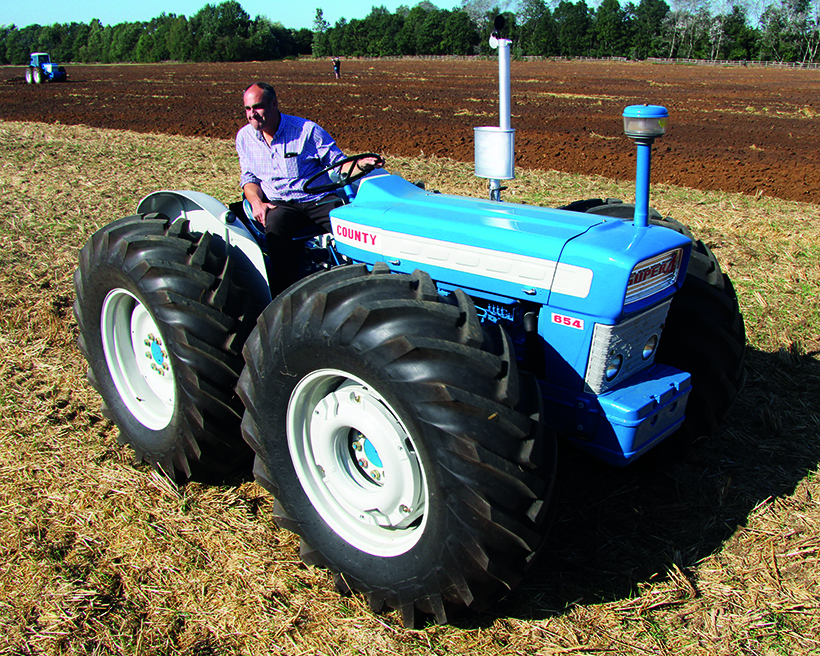 The 654 replaced the Super-4 in 1964, using the new Ford 5000 skid unit, although the Super-4 name was still proudly carried in the front nose cone.

Further developments
During the late 1960s, County produced unequal-sized-wheel 4WD tractors, but the firm’s emphasis remained firmly on the equal-size-wheel concept as the main part of its business. Although the smaller-wheeled tractors became more important towards the end of its existence, it was always the equal-wheelers that County was most well known for.

In 1980, the largest County tractor ever produced was launched. The mighty 1884 was based on the Ford TW-30, introduced the previous year and the largest in-house tractor to be produced by Ford so far. With its long bonnet and six-cylinder engine producing 188hp, the 1884 was a true monster. Once again it used the front axle and twin prop shaft design first seen on the Super-4, although substantially upgraded to cope with the new and more powerful skid unit. 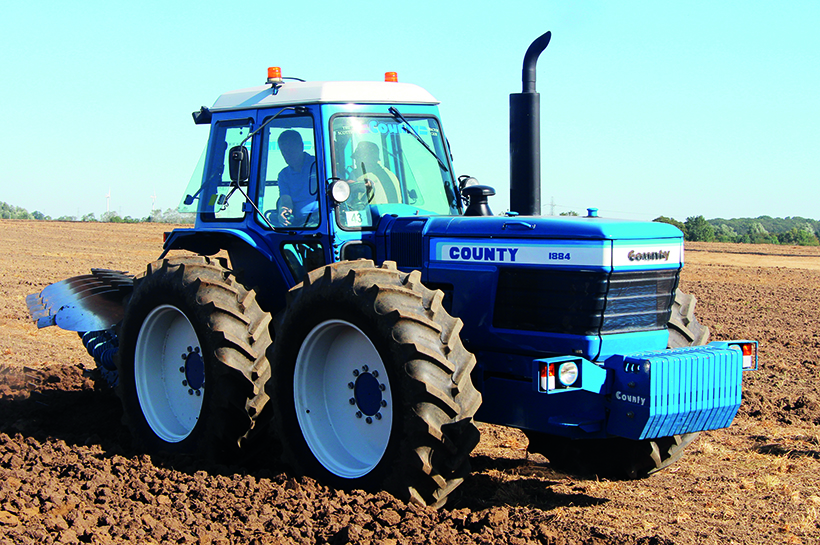 The ultimate use of the system pioneered by the Super-4 was the County 1884TW, introduced in 1980 and based on the Ford TW-30 tractor.

County faced stiff operating conditions as the 1980s dawned, and was soon in financial difficulties. The firm went into receivership in early 1983. This led to a succession of new owners during the 1980s and into the ‘90s, but the 4WD system that County had pioneered remained at the core of the tractor range that still proudly bore the County name.

The power of the 1884 flagship increased to 195hp, but the smaller 1184 seemed to be the most popular in the later years. With the introduction of the Ford Series 40 range in 1991, County produced 4WD versions of these machines, once again using the system pioneered on the Super-4. Few were built, and these would prove be the last of the County line. 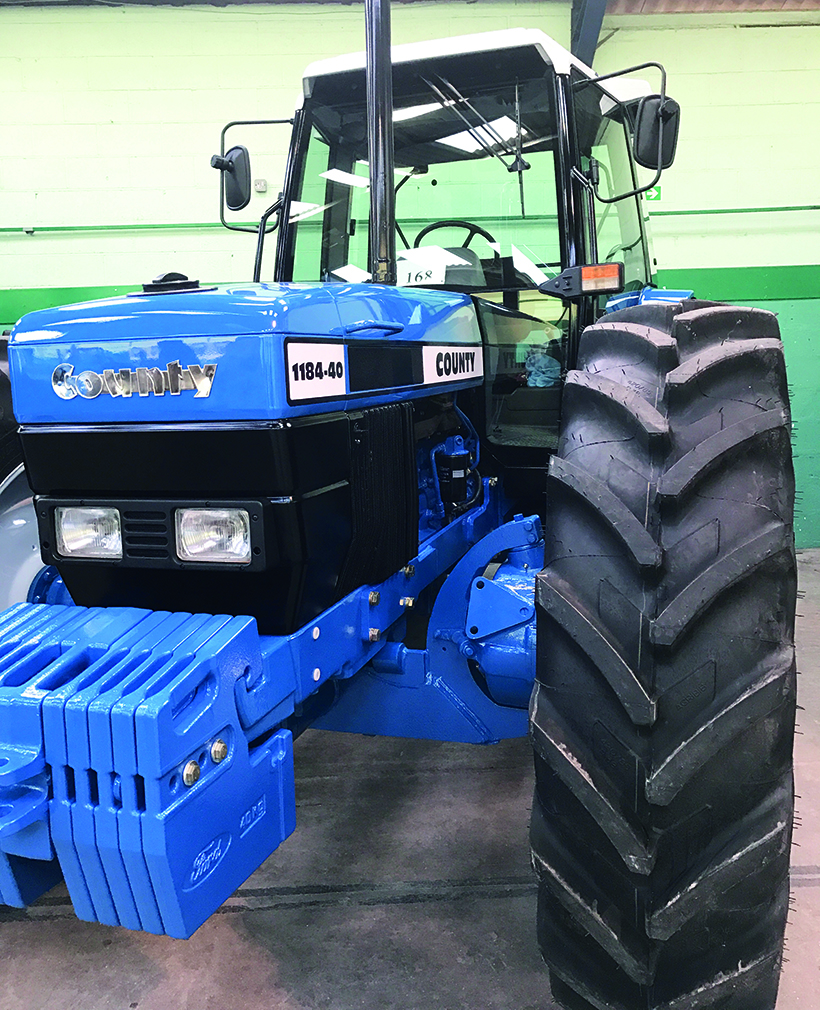 A rare survivor of the few County tractors built using the Ford 40 Series skid unit during the 1990s. With equal-size wheels and the famous County twin-prop-shaft drive, very much a continuation of the Super-4 design.

Today, the County tractor is sought after by enthusiasts, and it’s the equal-size wheel machines that are the most desirable. Back in 1960, the County Super-4 set a trend that would remain in production for over 20 years. It pioneered a system that provided perhaps the ultimate method of getting the power down to the ground, where it was most needed. In short, the Super-4 was the real start of the legend that became County. 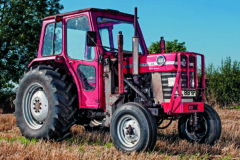 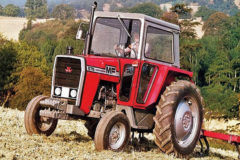