Jonathan Whitlam spotlights the Fordson Super Major; a tractor launched in Hamburg at a convention called Ford of Dagenham Comes to Europe, in November 1960.

The Fordson Super Major was introduced with much celebration in the autumn of 1960. With 52hp on tap, it could plough with a two-furrow reversible with ease, in most conditions.

The Swinging Sixties started with only perhaps a glimmer of what they would become. Now renowned for the Beatles and the rise of hippies, in the field of British agriculture, the beginning of the new decade was marked by Ford launching an important new incarnation of its Major tractor – the Fordson Super Major.

The tractor was an upgrade of a design that had existed for nine years as the E1A Major, replacing the original E27N Major in 1951. Built at Ford’s huge factory in Dagenham, Essex, the E1A Major – or ‘New Major’ as it was commonly called at the time, was originally offered with three different fuel choices for its four-cylinder engine. However, diesel rapidly became the dominant option, so much so that the tractor became known as the ‘Diesel Major’ in its Mark II guise, with a dedicated bonnet badge to prove it.

A big revamp of the model in 1957, to produce a Mark III version, was followed by the launch of the Power Major in 1958, using the improvements introduced in 1957, although the tinwork remained basically the same. 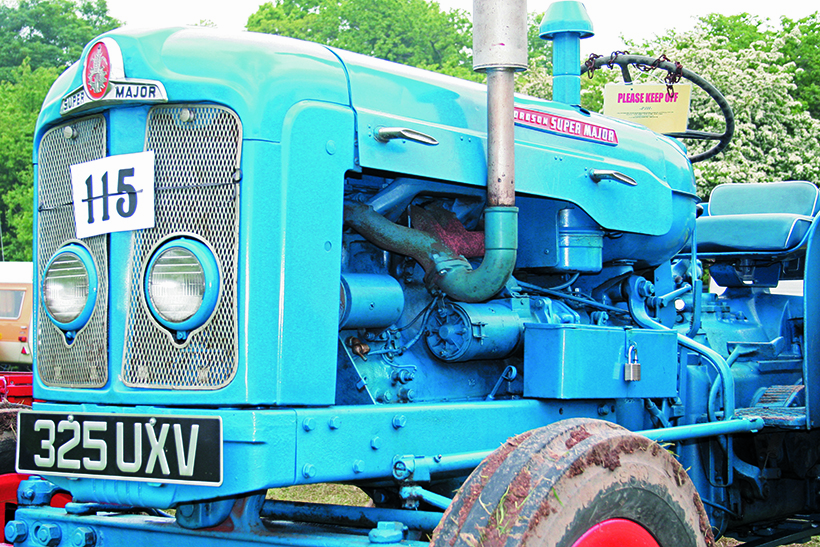 Replacing the Power Major, the Super Major featured a new front nose cone badge and also nameplates on each side of the bonnet. The new grey front grilles also accommodated the front headlights.

The Dexta option
By this time, a smaller machine had joined the Major. The Dexta was designed to compete with the Massey Ferguson 35, and other smaller, three-cylinder tractors. For the first time, Ford was offering two tractor models instead of one, and this saw sales increase, further building on the huge success of the Major itself. 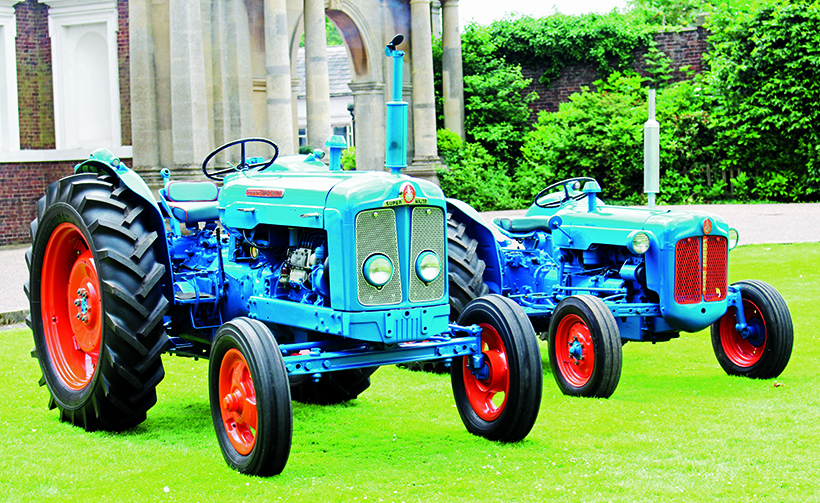 The Super Major was sold alongside the Dexta for all its existence; a third model, the Super Dexta, arriving in 1961. The building behind the tractors is Boreham House in Essex, once the base for Ford Motor Company tractor training courses, and now a wedding venue.

By 1960, the Major had been selling in large numbers for nearly 10 years, and the Power Major was one of the best-selling tractors in the UK (it also sold well in many export markets). Diesel was the standard fuel, although a petrol variant was produced, mainly for export rather than home sales. The Power Major proved to be a successful update, with many being sold during its short production run, before it was replaced by the new Super Major, in 1960. 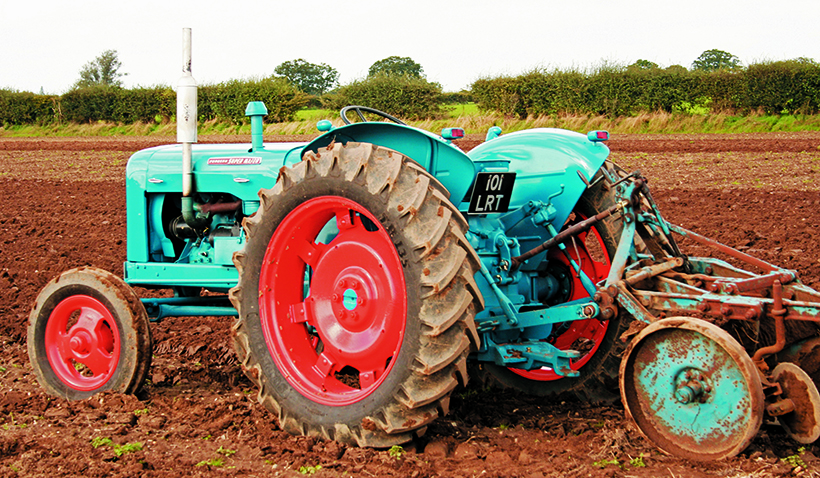 The Super Major kept the red wheel centres of the earlier Major line and, externally, it looked similar to what had gone before.

Detail changes
Externally, the new Super Major was like what had gone before. The same tinwork covered the same four-cylinder engine, with the same front nose cone covering the radiator. But the two grilles were now grey instead of the previous orange, while the now famous ‘Wheatsheaf’ logo carried on the top of the nose cone was joined by the words ‘Super Major’. The front headlamps were mounted inside the grilles rather than externally to either side of the bonnet, as previously, and a new ‘Fordson Super Major’ badge graced the sides of the bonnet. Red wheel centres remained, as used previously, and the output of the engine was still 52hp, as on the Power Major.

Underneath the skin, though, it was a quite different story, with many new additions. Most notable of these was the ‘Qualitrol’ hydraulic system that allowed for, not only position control, but also draft control; the latter a first for the Major line. Qualitrol had first appeared in 1957 on the Fordson Dexta, derived from a system used on North American Ford tractors. It was designed to compete with the excellent Ferguson System, which had cornered this side of the tractor market from 1946 with the TE-20 and then succeeding models. 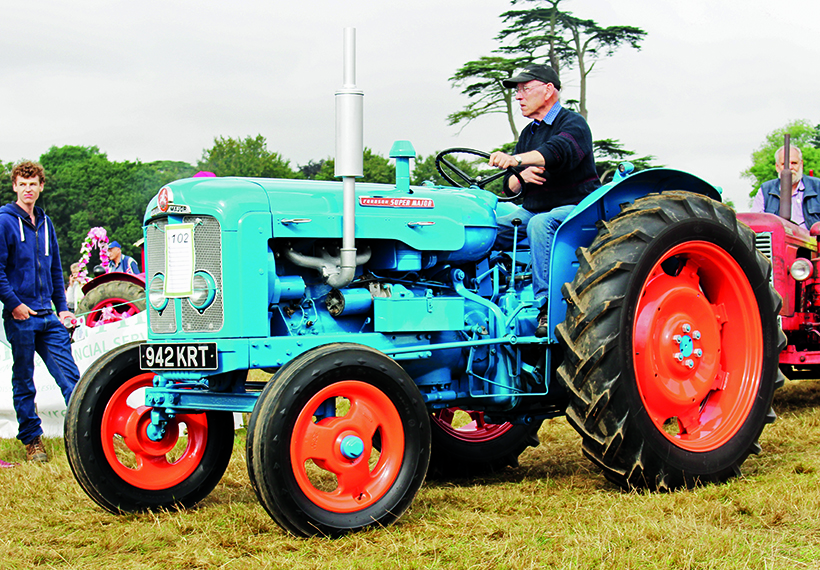 A fully-restored Super Major at a rally in Suffolk, giving a very good idea of what these tractors looked like when brand new.

Advanced features
The Power Major, and earlier Major tractors, had never been fitted with this advance, and the fact that the system also gave the operator control of external hydraulic services, meant that this really brought the Major into the ‘modern era’, as it were. Until then, Ford had relied heavily on the fact that the Major line was a much larger and heavier machine than the competing Ferguson types, and sheer brawn was enough for most farmers’ requirements. Times were changing fast, though, and most manufacturers were adopting more sophisticated hydraulic systems, offering operators much easier and subtler control of the tractor’s hydraulic system. Ford answered this need with the Super Major.

As already mentioned, the engine remained the same as in the Power Major; an excellent power unit that had proved as bombproof as any tractor engine could be! When first used in 1951 it was, in many ways, ahead of its time and had benefited from extra time to hone its qualities before production began, thanks to the E27N Major filling the gap from 1945 to 1951. 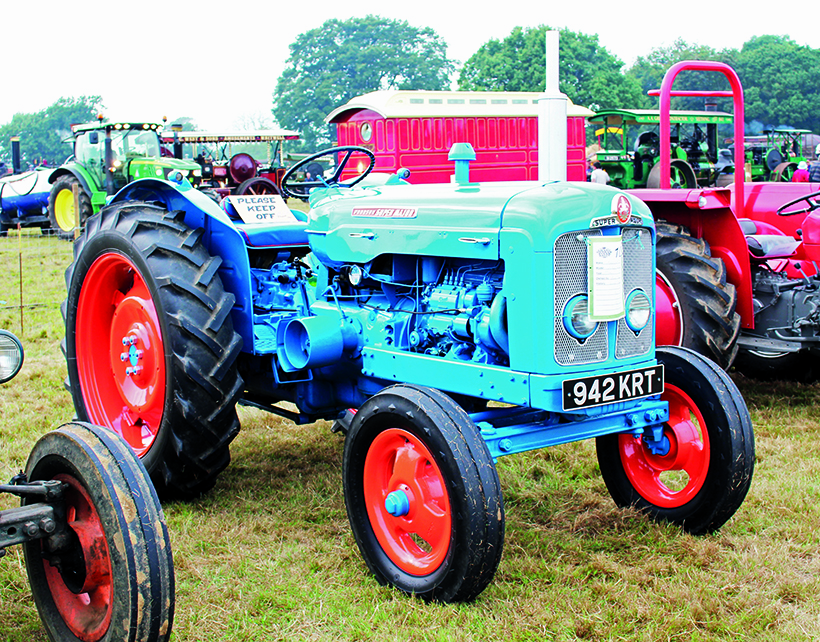 A close look at this side of the Super Major engine shows the Simms injection pump mounted to the side of the engine, and the belt pulley that was usually still fitted.

From 1948, many of the E27N Major tractors had been fitted with the Perkins P6 diesel engine, instead of the old petrol/TVO motor used back then. The New Major engine was available in TVO, full petrol or diesel forms from the outset, and was also a much more modern overhead-valve engine, rather than the side-valve unit used previously.

The E1A engine had been improved greatly in 1957 when the Mark III Major was launched, still simply badged as a ‘Diesel Major’. This was then taken into the Power Major in 1958, with several changes made to improve performance and power output without compromising the excellent characteristics of the engine itself. This is the pedigree of the engine used in the Super Major, and is why it continued to be a success. 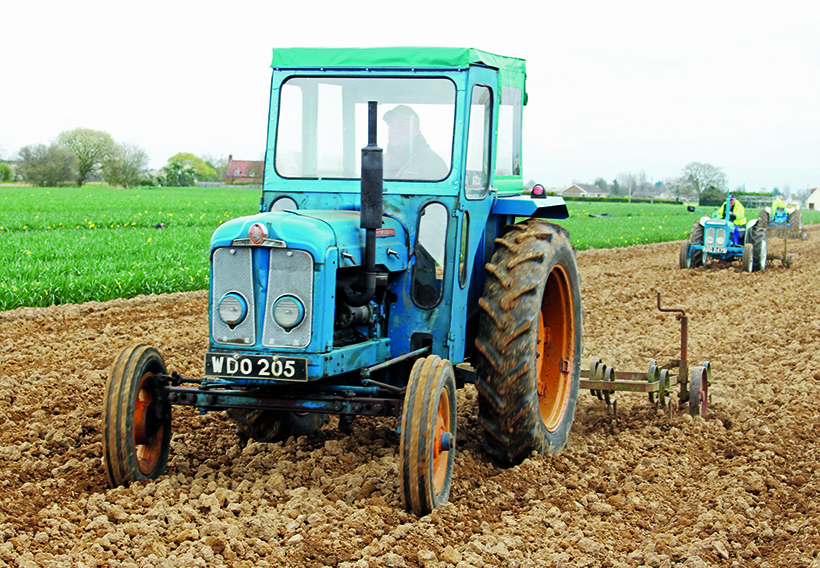 This Fordson Super Major belongs to Claas dealer, A. Woods, of Holbeach, Lincolnshire, and has recently been given a new lease of life thanks to some serious attention in the dealership’s workshops.

Mechanical matters
Other mechanical changes were also made with the introduction of the Super Major. Differential lock was now a standard fitment, giving the ability for the tractor to work better in sticky conditions, especially when ploughing heavy land for example. Disc brakes became standard, too, giving much better stopping power and also better reliability in service. Live power take-off and hydraulics were specified by most purchasers although, as usual with Ford, a cheaper alternative was offered with the non-live versions often being specified by penny-conscious buyers.

When it came to cabs, well this was something Ford didn’t really tackle. Dealers could fit a weather cab from various manufacturers if the purchaser required one, but this was still in the days when most farmers didn’t think the extra cost of a cab was worth pursuing. Unless, of course, they were going to drive the tractor a lot themselves, when it seemed to become a rather more common choice! Ford did fit a deeper seat as standard on the Super Major, though. 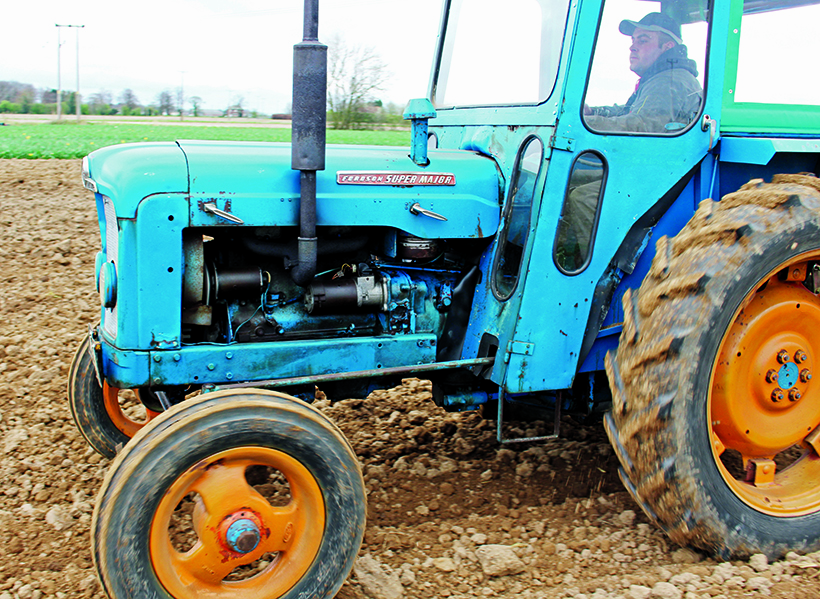 The distinctive bonnet lines of the Super Major showing how the top of the front nose cone, complete with badge, sticks out from the front of the bonnet itself.

Petrol power
As before, a petrol-powered alternative to the standard diesel engine was offered, aimed at export markets. An industrial spec. variant was also produced, although the agricultural version was by far the most common. With tractor sales going through something of a golden age in Britain at the time, sales figures for the Super Major remained healthy throughout its existence, and it was one of the most popular tractor models of its generation.

In 1961, a third model was added to the Dexta and Super Major line-up, in the form of the Super Dexta which, at 40hp, formed a superb intermediate model between the two existing tractors. With three models to choose from, farmers could now truly farm the Fordson way! 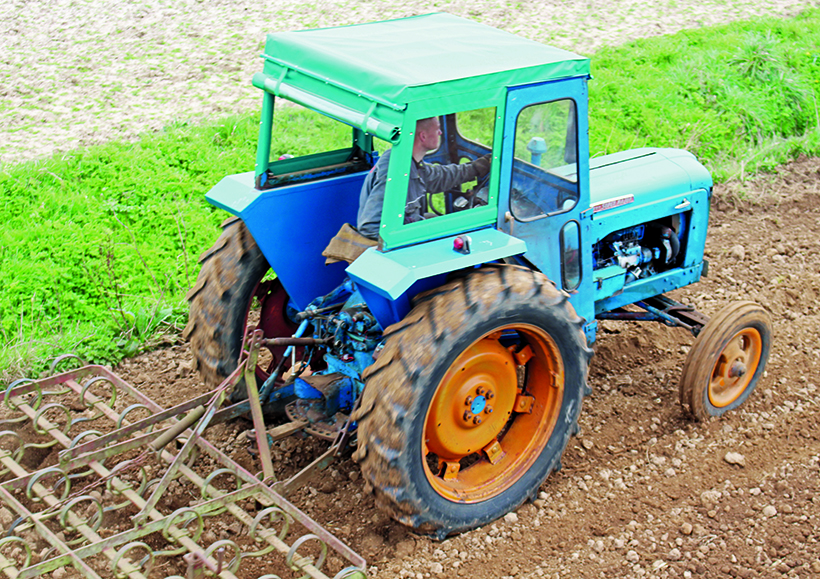 The Lambourn weather cab was quite substantial when compared to others from the same period, and also gave better visibility for the driver than some of its rivals.

New generation
The Super Major in its original form was only produced until 1963. The July of that year saw the launch of the New Performance range, with the three existing models all getting a makeover with new blue and white colour scheme designed to prepare British customers for the upcoming deletion of the Fordson range, in 1964. The new version of the Super Major wore the new livery, and also benefitted from a new sticker on the bonnet sides. It also received a Simms Minimec fuel pump on the engine which pushed power output up to nearly 54hp and, with the increase in engine revolutions, more power was now available at the PTO shaft. This was something that had been the only real flaw in the earlier models, the PTO being something of a weak spot.

Also, the transmission was tweaked to provide a larger spread of gears, especially at lower speeds, making the New Performance Super Major quite superior to its forebears. 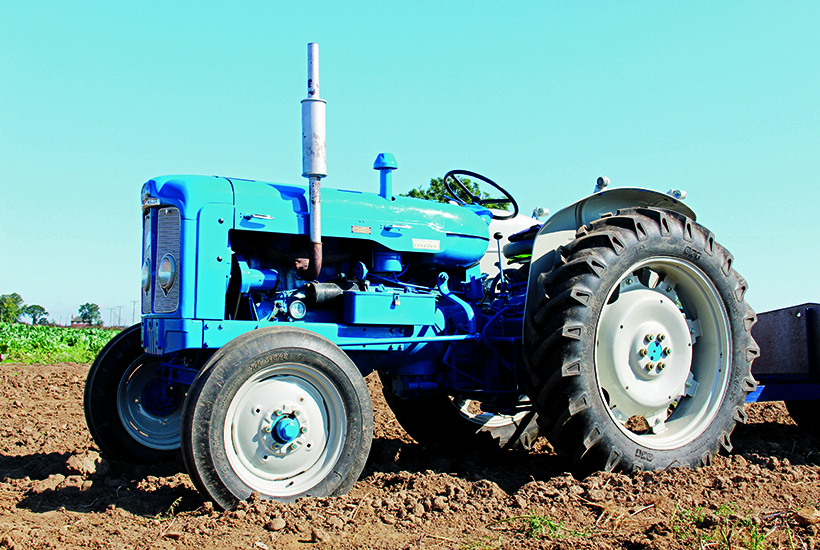 In 1963, the Super Major was uprated to become the New Performance Super Major, and wore this new colour scheme, making it stand out quite markedly from what had gone before.

Notable conversions
As with earlier generations of Fordson tractor, the Super Major was soon used as the basis for various conversions, both agricultural and industrial. It was soon found ideal and many future iconic machines were created using it, including the County Super-4 that was the first of that firm’s famous ‘big-wheelers’, with equal-size wheels giving four-wheel-drive traction.

Both County and Roadless also produced crawlers using the Super Major, although these were by now in serious decline, replaced by the 4WD tractors. Many loading shovels and cranes were also built using the Super Major at their heart. This was not an unknown phenomenon with the Super Major – far from it – but it was a time of expansion, and these various conversions were becoming increasingly popular in this era. 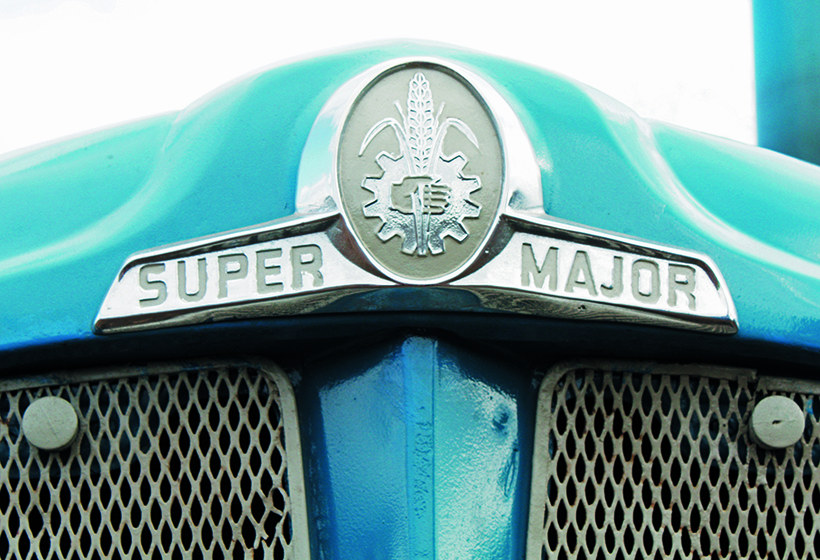 The Super Major badge remained on the front nose cone of the New Performance version, together with the ‘Wheatsheaf’ logo.

A lasting legacy
The New Performance was the ultimate version of the E1A Major, and one that was ideal for bringing the curtain down on this fine line of tractors that had been built at Dagenham for 13 years in total. Out of that, the Super Major enjoyed four golden years, and was certainly a favourite with many owners – and still is today.

There can’t be many ploughing matches, rallies or vintage shows that don’t feature at least one Super Major. They sold in their thousands, were used for hard work in many cases as frontline machines, and many have now been restored to better-than-new condition by enthusiasts. The Super Major was a fine way to end the Fordson era. 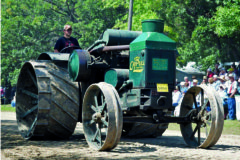 The land of the giants 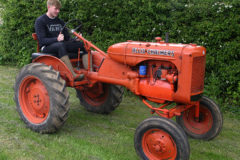