We put two similar and popular tractors head-to-head and pick a winner. This time we’re spotlighting the Case IH 1494 and the Case IH 885XL. 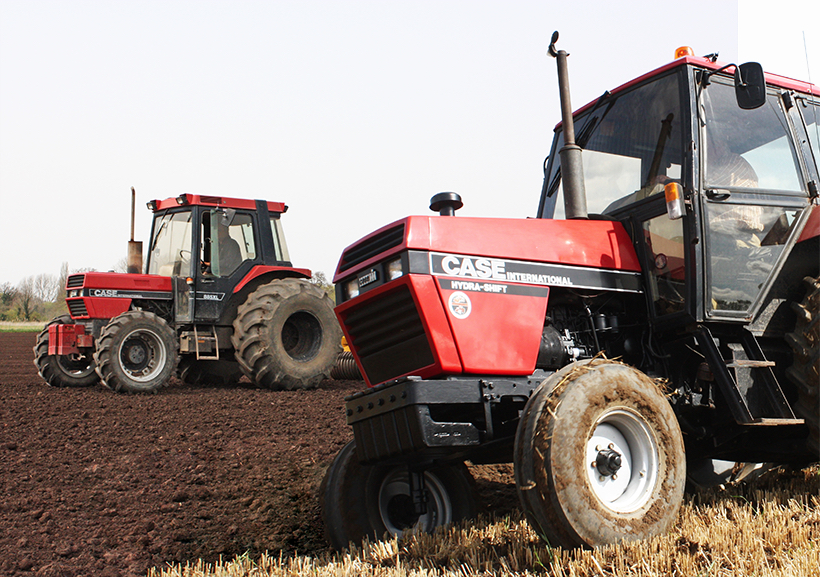 Tractors head-to-head: At 83hp and 82.3hp respectively, the Case IH 1494 and 885XL were well matched, but there’s more to a tractor than power. Which one would you choose?

Tractors are like cars in that they attract a loyal following – die-hard owners that love a particular brand and will argue that their machine is best, often in the face of stiff opposition. For the first of our new head-to-head comparisons, however, there’s a twist. Both machines come from the same manufacturer – in this instance, Case IH.

The latter half of the 1980s was an interesting period for tractor buyers, with two manufacturers becoming one, and brand allegiance posing some thought-provoking questions. The merger of JI Case and International Harvester had created Case IH, and it was obvious that not all of the manufacturers’ models would be retained in the new-look line-up.

Model backgrounds
The range that would take Case IH forward comprised 16 models – six from Case and 10 from IH – from 45hp to 291hp. Three of these were in the popular 80-90hp bracket, with two built in Britain and one on the Continent. Although the turbocharged 856XL was a well-respected four-cylinder tractor, it would not achieve the sales volumes enjoyed by its stablemates, and it is for this reason that our comparison focuses on the 1494 and 885XL. 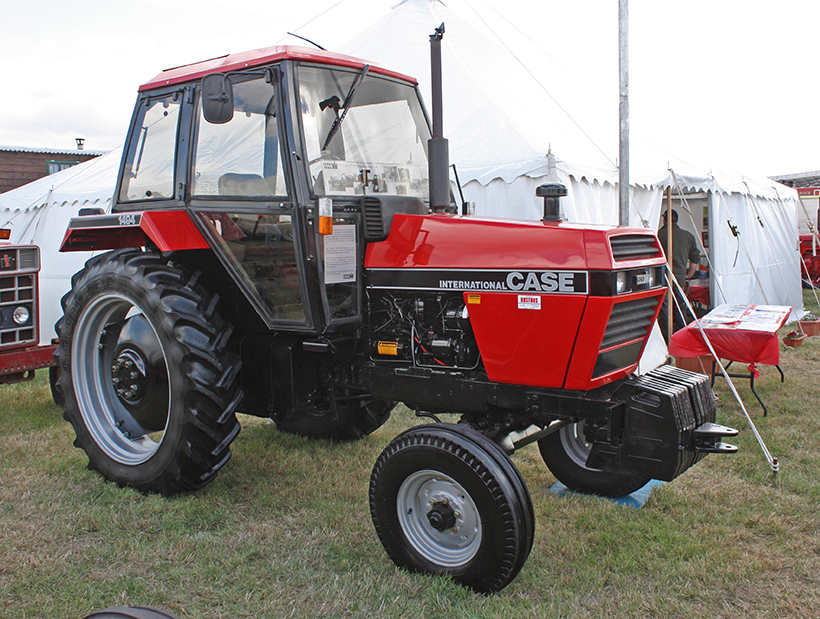 The 1494 looked very different in its new, Case IH livery. But it was still very much a David Brown.

IH’s first 885XLs were built in 1981,, and could trace their lineage back to the World Wide Series models of 1970. The skid unit and panels were finished in red, with off-white for the wheels and cab roof.

Come the merger,, and a new livery of red panels, black cab with red roof, black skid unit and black/silver wheels brought a uniform appearance to what were once two distinct rivals. Despite the shared look, the rivalry would remain – with ‘David Brown men’ and ‘IH men’ staying loyal to their steeds for quite some time. Why both models were retained following the merger is an obvious point of debate, but our comparison here may well enable you to draw your own conclusion. 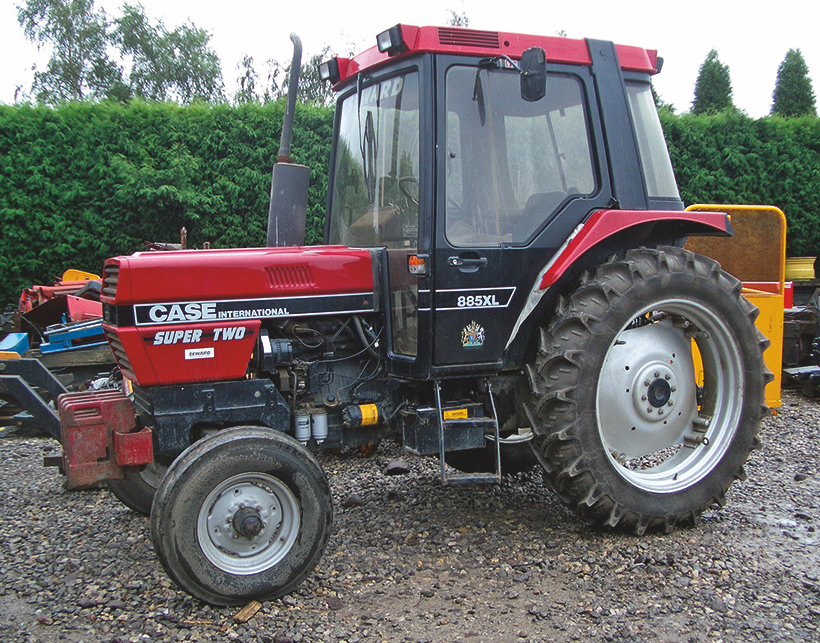 Engine differences
The engine is an obvious place to start this head-to-head look at these two popular models and, although both were four-cylinder motors, their features made them noticeably different in operation.

Built in Britain, the 1494’s AD4/55T is a David Brown-derived unit that relies on turbocharging to produce its peak output of 83hp (DIN). It shares the same bore and stroke dimensions as the 1294, 1394, 1594 and 1694, which minimised the number of parts used and resulted in better availability.

It was specifically designed as a turbocharged unit, so additional strength was built into the crankshaft, crankcase and conrods from the outset and, although its stroke length isn’t as long as the 885XL’s, its torque output is impressive – 296Nm at 1,500rpm.

The 885XL uses the German-built D-268 engine – a naturally-aspirated unit that produces 284Nm of torque at 1,400rpm, with a 100mm bore and 140mm stroke (almost 800cc larger than the 1494’s engine). Despite some owners retrofitting turbochargers to the D-268 and later models – like the 985 Turbo Special, 995 and 4240, using a turbocharged version of the engine – it seems to suit natural aspiration.

Both engines are unlikely to disappoint and, although you may disagree, the 885XL has the edge as far as we’re concerned. Although the output is similar, the D-268 generates maximum torque at 100rpm less than the AD4/55T, is a good starter, reliable and has a nice exhaust note.
T&M verdict: Case IH 885XL 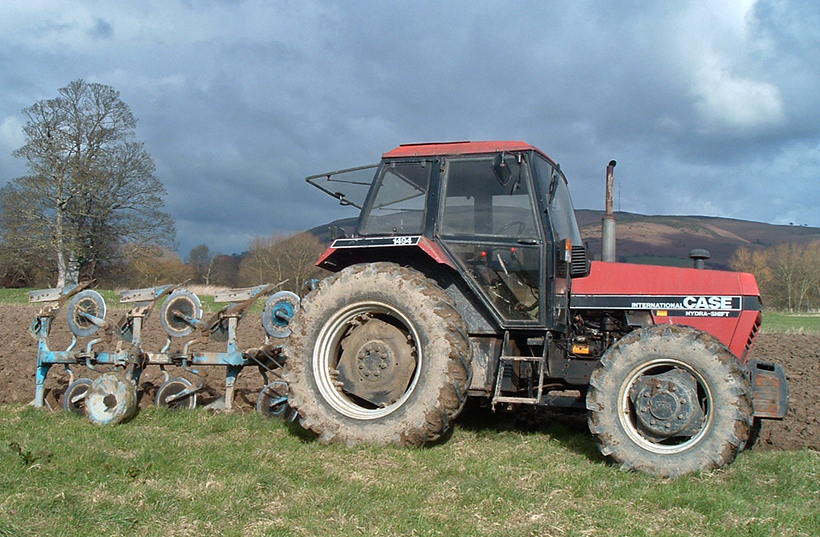 Although seen here with a three-furrow reversible, the 1494 is perfectly capable of handling a four-furrow plough…

Driven front axles on the pair were both centre-drive units with on-the-move engagement, while the final drive units on the two-wheel-drive 1494’s rear axle could be rotate to gain additional ground clearance. When teamed with front axle beam extensions, the tractor was ideal for row-crop work or specialist applications.

The gearbox perhaps provides a most noticeable difference between the two tractors. Synchromesh was standard on both, but the 1494 is by far the more versatile in terms of the options offered. Whereas the 885XL had an eight-by-four synchro ’box as standard, with the option of a 16-by-eight Powershift (previously known as the Torque Amplifier), the 1494 had a 12-by-four synchro as standard, with the choice of a 15-by-five synchro with creep, or the award-winning 12-by-four Hydra-Shift.

This system, providing four speeds with clutch-less changes and engine braking, had been around for a number of years, but was well liked and proved its worth in many applications. Had the 885XL been fitted with a semi-powershift transmission, or a creeper ’box enabling forward speeds as low as 0.6kph, our thoughts may well have been different – but, as it stands, this round definitely goes to the Meltham-built model.
T&M verdict: Case IH 1494 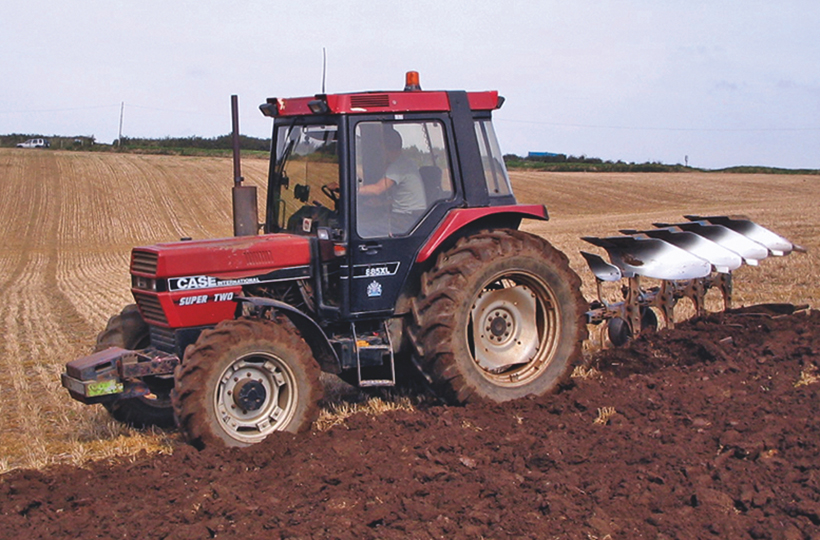 Power take-off
Both tractors feature a two-speed power take-off as standard, but their output is quite different. The 885XL uses the dual-shaft system that had been a feature since the 74 Series tractors that emerged in the early ’70s. The 1494, on the other hand, features a reversible shaft to switch between six and 21 splines, and an in-cab selector lever to change the speed.

The PTO system is also one of the most noticeable differences between these two tractors, because of the power output at the shaft. Considering the difference in engine power is just 0.7hp (DIN), the power variation at the power take-off is astounding.

The 1494 fairs much better, with its maximum PTO power of 78hp equating to a drivetrain loss of a little more than 6%. With the power take-off set to 540rpm, output at the shaft is 75.3hp – just 9.3% less than the maximum engine power, and almost half of the losses experienced by the 885XL.
T&M verdict: Case IH 1494

Hydraulic systems
David Brown gained a good reputation for its Selectamatic hydraulic system and, although the look of its tractors had changed somewhat since its introduction, the 94 Series was praised by many for its ability in the field.

The 1694 is fitted with a tandem hydraulic pump arrangement as standard, but four-wheel-drive versions of the other models in the range also enjoy this luxury. The two-wheel-drive 1494’s single pump has a flow rate of seven gallons per minute (32 litres per minute), while the four-wheel-drive version has a 12.7gpm (58lpm) flow rate. Hydraulic power is 11.3hp and 20hp respectively. Fitted with a single, large-capacity pump, the 885XL can muster a flow rate 11gpm (49lpm) and hydraulic power of 14.2hp.

Draft and position control were standard on both machines, while the 885XL features raise response and drop response controls for the draft system. The 1494 utilises lowering control and a useful dump valve for fast lowering, with little or no load to speed up cycle times.

Up to three spool valves can be fitted to both models.
T&M verdict: Case IH 1494 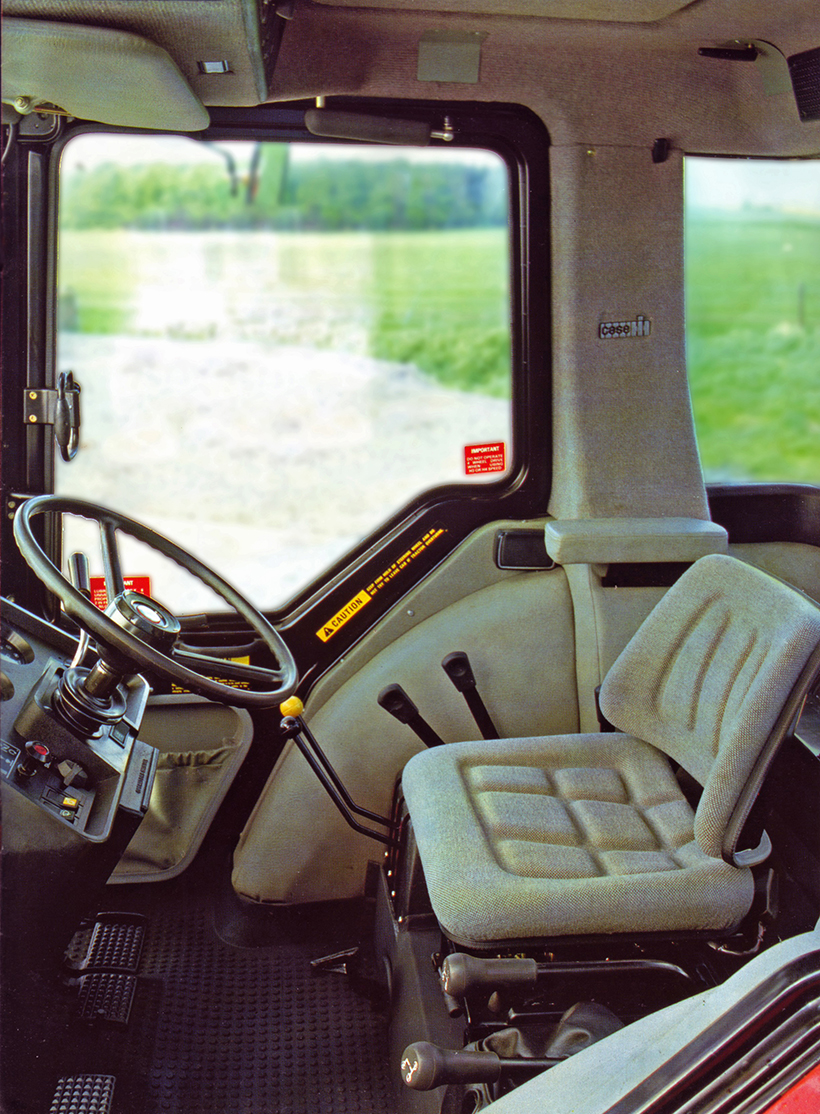 The XL is let down by poor sideward visibility, and you shouldn’t be surprised to find stained interior cladding due to minor leaks.

Inside the cabs
In a recent ‘Q’ cab comparison feature, it was pretty close between the XL and the Sekura ‘Explorer’, with the 885XL’s cab losing out to the 1494’s by just four points in both the exterior and interior categories.

The XL is let down by its visibility to the side, thanks to those chunky ‘B’ pillars and lower door panels, and some of the Sekura’s controls could have been better positioned, but which is best is a close call.

Noise levels are very similar and long-term users of each tractor will argue for and against their respective steeds, but it really is a close-run contest in this department.

The ‘corporate’, light grey interior with black cab frame and black, right-hand console provide a uniform look, but the differences in dash binnacles and obvious variation in sideward visibility give them their own unique feel.

Remarkably, the Sekura unit also had an ace up its sleeve. Whereas the 885 was also offered in ‘L’ configuration – for those that wanted a low-profile alternative to the XL – the 1494 could go topless! Should the owner need to access a low building or an orchard, for example, the upper portion of the Sekura cab could be removed to create a tractor to suit.
T&M verdict: Case IH 1494 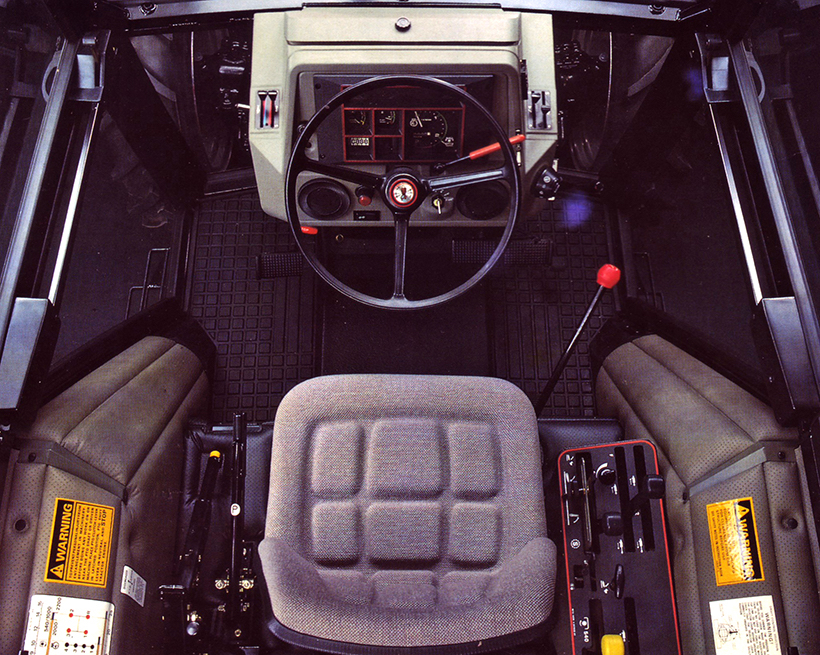 Overall styling
Beauty, as always, is in the eye of the beholder and, although the livery and ‘nose’ design are the same, the IH and David Brown looks definitely shine through. To be fair, there’s little to choose between the two but, had the 1494 been fitted with cab-mounted work lights, the outcome might have been very different.

The Porsche/IH design of the XL may have been around for longer, but the XL’s integral roof lighting (fore and aft), certainly makes a difference to the 885XL’s aesthetics, and it’s for this reason that the older design has the edge in our opinion.
T&M verdict: Case IH 885XL

Final thoughts
Although the 885XL ‘won the battle’ it was fighting with the 1494, in that it lived-on as the 895XL in terms of Case IH’s 80-90hp offering, along with the 856XL, many thought that it was getting a little long in the tooth by the second half of the 1980s. With this said, the 95 Series was not the end of the line for the World Wide-derived skid unit and the XL cab, as the 4200 Series continued to fly the flag for the combination into the second half of the 1990s.

The company’s new 5100 Series Maxxum tractors were JI Case designs that ultimately shaped the future of Case IH’s models for the decades that would follow, with a semi-powershift transmission, similar styling to the 94 Series and a cab reminiscent of that fitted to the 1494 hinting to its origins.

David Brown had got it right with the 90 Series and, thankfully, four models in the resulting 94 Series survived the merger between JI Case and IH – paving the way for further developments.

If you’re thinking of buying a tractor in this horsepower bracket, from the same era, and these two have crossed your radar, there’s obviously more to it than a ‘Top Trumps-style’ comparison, so what else do you need to know?

In terms of parts availability and prices, both have specialists dedicated to supplying good-quality parts at affordable prices, in addition to genuine items available from your local Case IH dealer. But the 885XL is definitely easier to find if you’re trawling the internet or thumbing through the classifieds.

Unfortunately, common doesn’t equate to low prices. Much like the hallowed Massey Ferguson 135, produced in the tens of thousands and still proving popular today, it seems that the 885XL is still in demand and thus commanding high prices – particularly for the better, low-houred examples.

So, if price matters, you’ll be better off plumping for a 1494 – offering great value for money and a decent spec, it’s hard to see where you can go wrong!
OVERALL WINNER: CASE IH 1494 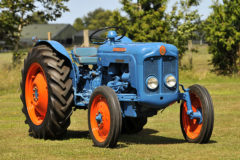 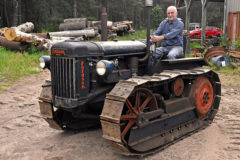