Jonathan Whitlam tells the story of two 60-year-old Nuffield tractors, and the engine problems that dogged their production lives. 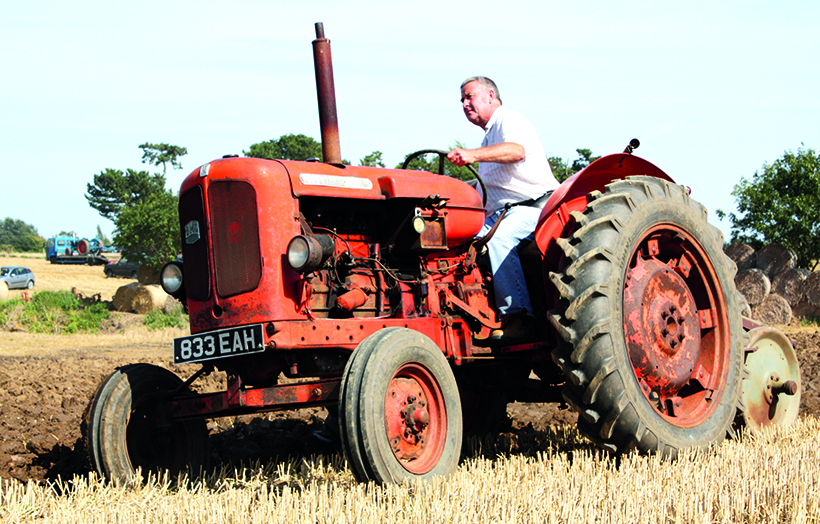 The purposeful look of the Nuffield 4/60 at work with a plough. The overall, external design had changed little since the days of the first Nuffield Universal of 1948.

Back in the early 1960s, choosing a tractor was pretty straightforward. First, you decided on your make, which was a choice usually based on previous ownership and/or the relationship and proximity to a main dealer. Then it was simply a case of choosing either a large or small model from the range.

A definite pattern emerges of a small, three-cylinder and a larger four-cylinder model in each range and, doubtless, there are further examples that could be quoted. The subjects of this story, though, are the two, new BMC Nuffield tractors that were introduced 60 years ago. 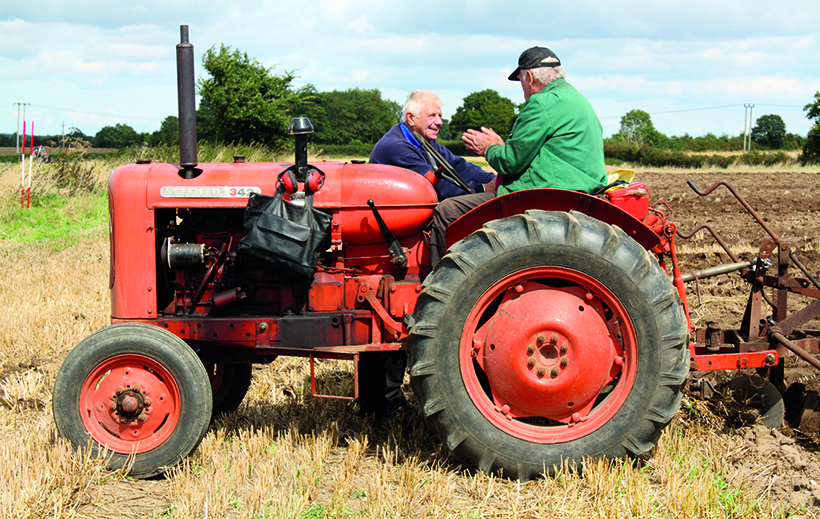 The Nuffield 4/60 and 3/42 were launched in November 1961 and, for the first time, the name ‘Universal’ wasn’t used on the bonnet sides of these orange tractors.

Nuffield tractors
Nuffield tractors had earned themselves a good reputation since they first appeared in 1948. At that time, the company’s four-cylinder tractor was truly state-of-the-art, and made all other contemporary designs look very dated, thanks to its well-designed and modern styling, and its comprehensive list of features that had been decided upon by farming experts.

By 1961, Nuffield offered a two-model range, with both three- and four-cylinder tractors available. Introduced in the mid-1950s, the Universal Four had been an improved version of the original Nuffield Universal; its four-cylinder engine being tweaked, even while in production so that, by 1961, it produced 56hp.

The change in name to ‘Universal Four’ came about because of the introduction of a new three-cylinder model, aimed at the market already occupied by the Ferguson 35, and which was soon to become much more competitive once the new MF 35 and Fordson Dexta models were launched. The Universal Three was unusual, though in that, despite being a smaller, three-cylinder tractor design, it wasn’t as lightly built like its competitors, and so was somewhat heavier. This, however, had the effect of making it very good for draft work, and the Nuffield Universal Three soon built a reputation of being a very powerful performer, especially when the going got tough. 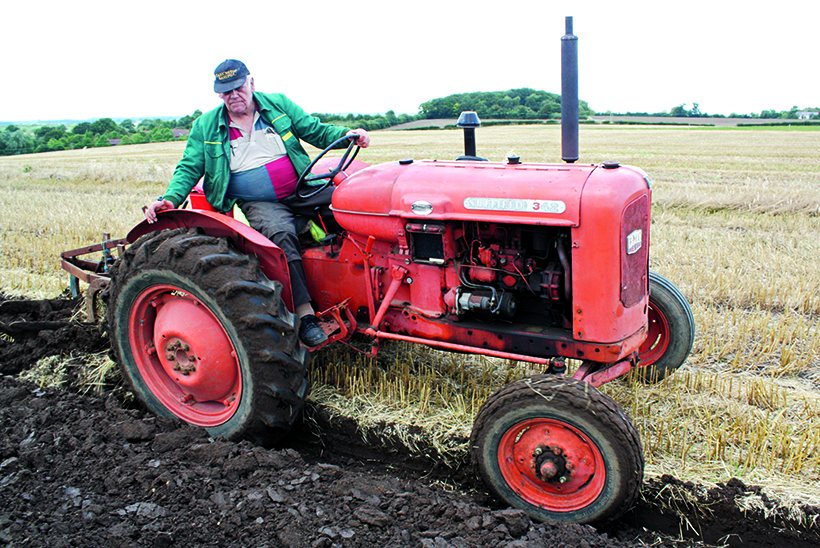 The 3/45 replaced the Nuffield Universal Three, which had been the company’s first three-cylinder tractor. The engine was the same as used previously, with just minor tweaks to produce extra power.

Since the beginning of Nuffield tractor production, the factory building them was at Ward End, in Birmingham. Originally conceived by the Morris organisation, the Nuffield later blossomed under a new parent company, BMC (British Motor Corporation), following the merging of the interests of Morris with Austin. However, in 1959, the construction of a brand-new factory began in Bathgate, Scotland, which would eventually become the home of the Nuffield tractor.

New models for ‘61
It was against this backdrop that, in November 1961, Nuffield tractors were rebadged and, at the same time, the Bathgate factory began production with the older Universal Four.

The new tractors looked exactly the same as the earlier Universal machines, but the new model designations of ‘3/42’ and ‘4/60’ offered a clue that more power was available under those familiar bonnets. The first letter of the new model number referred to the number of cylinders, while the last number referred to the maximum power output. Otherwise, the tractors were identical to their predecessors and inherited the same, five-speed transmission. 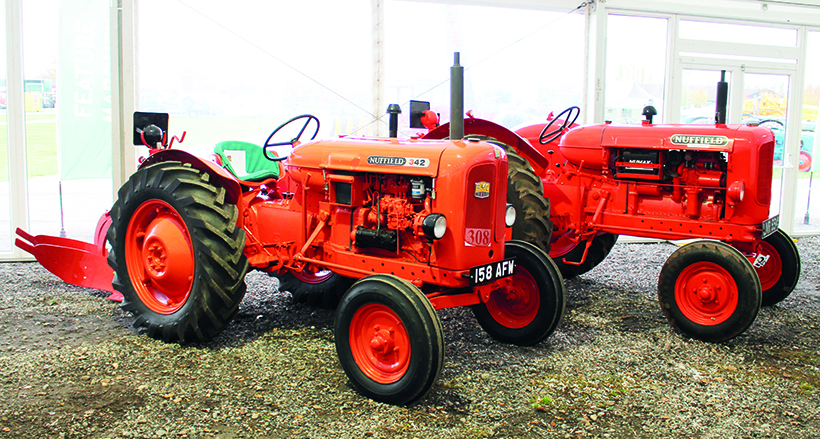 A beautifully restored Nuffield 3/45 parked next to a Nuffield Universal shows that this was a smaller tractor than the four-cylinder model, but not by much!

The 37hp Universal Three gained five horsepower as the 3/42 and, likewise, the Universal Four, with its 56hp, benefitted from four additional horsepower, to become the 4/60. At least by keeping the familiar lines of the original tractors, the loss of the Universal name wasn’t missed, although this was the first time that the name had been dropped since the first tractors in 1948.

BMC must have figured that, by keeping the family connection through external design and the ‘Nuffield’ name, the Universal branding was no longer as important as previously. It probably also gave the valuable impression of something new, while not discarding away all the customer goodwill generated over the previous 13 years of Nuffield tractor production. 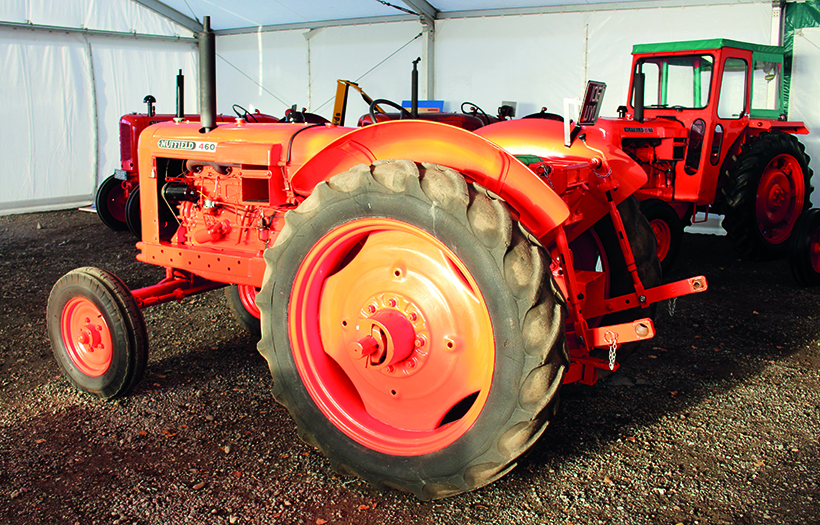 This Nuffield 4/60 still features the iconic Nuffield sliding bar rear axles, which protruded quite a distance from the centre of the rear wheel centres, and were an optional extra.

Extra power
The 3/42 inherited the older Universal Three’s engine, now tweaked to produce the extra power required and, with a capacity of 2.8 litres. This proved to be a very reliable unit, and the model enjoyed great success, even if its greater weight didn’t make it the ideal competitor to lighter models such as the MF 35 and Fordson Dexta. However, with 42hp on tap, it was more than a match for the early versions of its competitors, having the edge with power output and tractive ability.

The 4/60, however, was a slightly different story. The Nuffield Universal had built up an envious reputation as a very reliable tractor, and the Nuffield name was already being held up as the Rolls-Royce of tractors. Unfortunately, the new four-cylinder model was about to ruin an otherwise pretty blemish-free record.

Trouble ahead
The new 4/60 was fitted with an evolved version of the four-cylinder OEA BMC diesel engine used previously, now designated the OEE and, as well as using a Simms Minimec fuel pump, it also featured changes to the cylinder bores. Unfortunately, this led to cavitation problems, especially as the 60hp output was being strived for at the expense of various other components, which were subject to excessive wear. 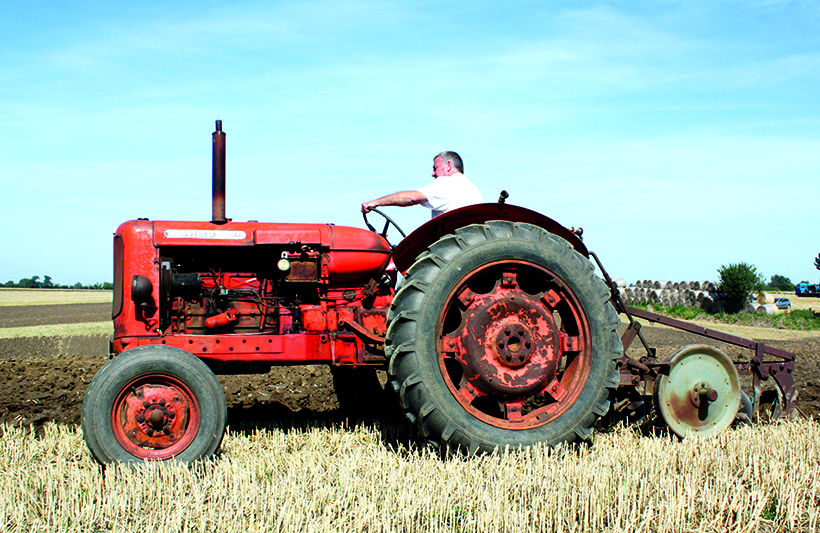 Dish-type rear wheel centres of more conventional design were the more common fitment to the Nuffield 4/60, as shown on this very original-looking example, complete with two furrow plough.

This problem didn’t surface until the tractors were out in the fields with their new owners, and wasn’t picked up on during any trials that took place before the model went into full production. In fact, it looks as though not much was done to test the redesigned engines at all, which soon proved to be a regrettable oversight.

Simple enough perhaps, but not when you consider the fact that Bathgate had only been geared-up to produce four- and six-cylinder engines. This led to the rather unsatisfactory situation of three-cylinder engines being shipped from Birmingham to Bathgate to be fitted in the 3/42 tractors, while Bathgate shipped four-cylinder engines down to Birmingham for fitment to the 4/60 tractors! 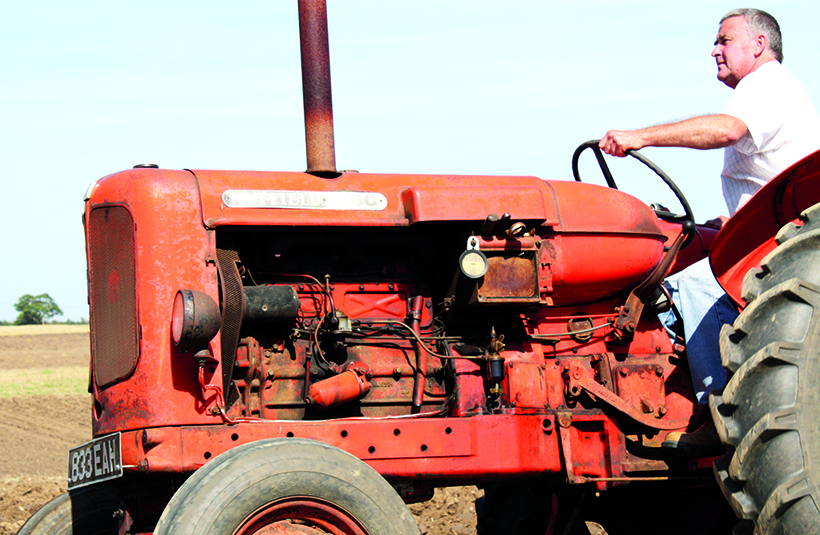 The BMC four-cylinder engine used in the 4/60 was an improved version of the original, although the need to get it to produce 60hp resulted in some issues with cavitation. In reality, the engine output still fell below 60hp, although the end result still produced a very powerful tractor.

Of course, back then – and as is still the case today – components, even large ones such as engines, were often constructed in separate locations to the actual assembly. But from a modern perspective, the entire operation seems a bit of an odd one, given the mileages involved.

This method of production also resulted in problems for the 4/60, as its engine, along with its new faults, was being produced in a new factory with a new labour force. This led to some engines not being constructed to proper tolerances, resulting in even further problems once they were on the farm working hard. There were even reports of liners and other items being fitted incorrectly, or even missing altogether!

Conversely, the 3/42 was unaffected by this as its engine was still being produced in the same Birmingham factory it had always been, and by experienced operatives using the same tooling, even if the tractor itself was assembled in Scotland. 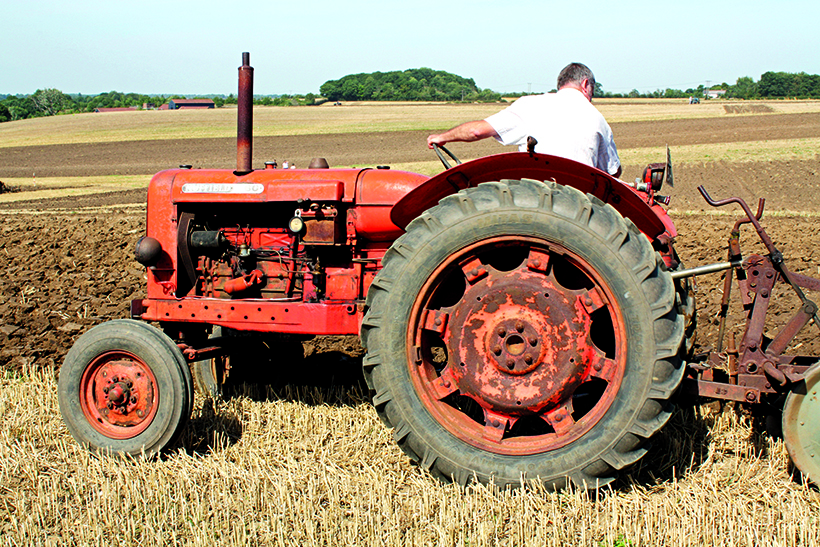 Nuffield tractors were always well built and, although the move to producing the four-cylinder engine at the new Bathgate factory led to problems, the tractors still generated an enviable reputation for performance.

Field failures
All this led to problems in 1962, once several 4/60 tractors had been sold and were out working on farms. Many engines failed in use, and had to be the subject of a massive rectification effort under warranty. The cost of this to BMC was bad enough, but the loss of confidence in the brand caused by the problems was much worse. It didn’t help that, although fixes were found and implemented, the engine was never truly reliable for the rest of its life in subsequent Nuffield and Leyland tractor models, and the problems were only finally solved in 1972.

That said, although still problematic, the tractors worked well enough once the faults had been addressed in most cases. No doubt the problems caused Nuffield to lose customers, although sales of the 4/60 remained high and, in all other respects, these tractors proved themselves to be reliable. However, even by the moving of all tractor production to Bathgate by the end of the summer of 1963, engine problems continued in tractors out in the field.

New models
BMC had another sales tactic up its sleeve, though, to keep sales coming in despite the four-cylinder engine woes. In September 1964, the new 10/42 and 10/60 replaced the 3/42 and 4/60 models, after only three years of production. This saw the introduction of a 10-speed transmission, hence the ‘10’ in the model number. This was a big deal at the time, and represented a huge increase in the previous number of ratios fitted to Nuffield tractors (and also any competitors’ models). The same engines were used, so the four-cylinder 10/60 was still a victim of the issues originally seen with the 4/60, although to a lesser degree than originally. 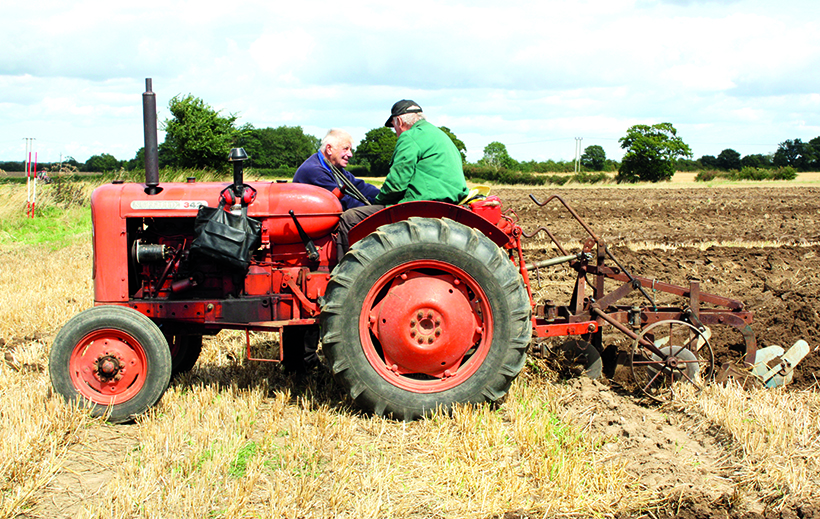 The 3/45 was always overshadowed sales-wise by its bigger, four-cylinder sister and, therefore, it’s not as common as the larger, 4/60 model.

With the changeover to the new, 10-speed models in September 1964, production of the 3/42 and 4/60 ended, but their working lives on farms all over the world had only just begun. Four-cylinder engine problems aside, both of these Nuffield tractors managed to not only sell well, but remain well thought of today. The Nuffield image may have been slightly tarnished, but the overall good design of these tractors shone through, and they remained a popular machine both in three- and four-cylinder guises. Many survive to the present day in the hands of enthusiasts, and are given an airing at shows and working days.

Nuffield kept its general air of being the Rolls-Royce of tractors despite the engine issues, and that fact alone speaks volumes about the quality of the original Nuffield design, and how it was conceived back in the late 1940s. Looking stunning in a line-up of Nuffield tractors, this Nuffield 4/60 looks just as good as it would have done when brand new. 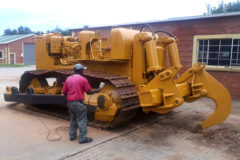 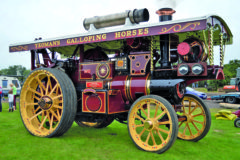