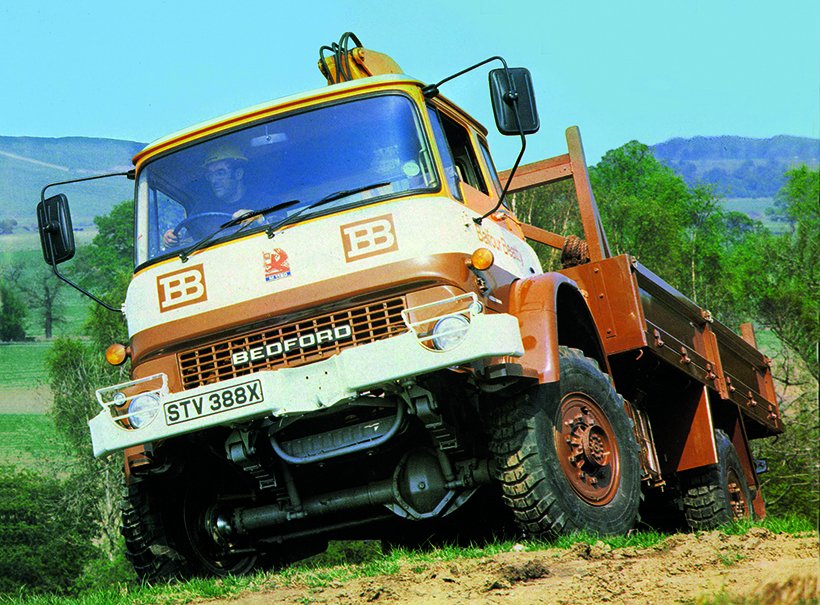 Versatile Bedford M-Type: The vehicle was in its element when traversing rough terrain. Civil engineers Balfour Beatty was the operator of this 1981 M1120 (MJR2), with Hiab self-loading crane.

The versatile Bedford M-Type was a legendary, four-ton, on/off road cargo truck that was notably – and successfully – used by the military. Its performance and versatility were unquestioned throughout its long, 16-year production run.

The M-type was an impressive off-road performer; not only was it a match for anything that the FVRDE testing ground at Bagshot could throw at it – such as the Alpine Hill Route and Articulation Gauges – but it could even tackle the Long Valley Tank Testing Course that was meant only for high-mobility, tracked vehicles. 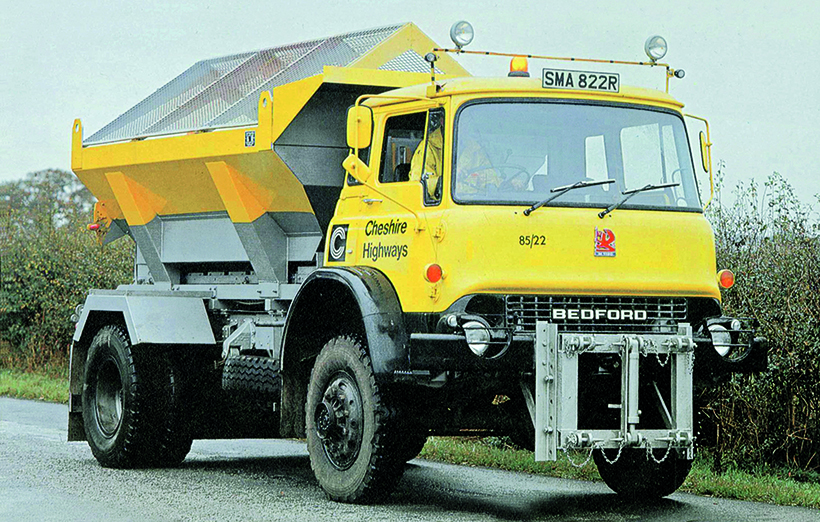 Among the many specialist roles for the versatile M-type were snow-clearance and gritting. This M1120 (MJR1) of Cheshire highways, is a good example.

Excellent lateral stability
A wide, 80in track gave the M-type excellent lateral stability, enabling it to cope with side slopes of up to 30 degrees. Generous ‘belly’ clearance and good approach and departure angles of 41 and 38° respectively, enabled the vehicle to cross sharp ridges and deep gullies without getting stuck. Military models also had water-proofed electrics, and could wade in up to 30in of water without special preparation.

The multi-fuel engine (identified by the letter K), fitted to MKP military versions until 1981, differed from the 330 cu in diesel in having an in-line injection pump in place of the standard, rotary distributor-type. It could run on a choice of DERV (Diesel Engined Road Vehicles) or AVTAG jet fuel, which is basically a form of paraffin. A two-position fuel changeover switch was incorporated into the excess fuel device, giving a choice of ‘D’ (diesel) or ‘P’ (for AVTAG). 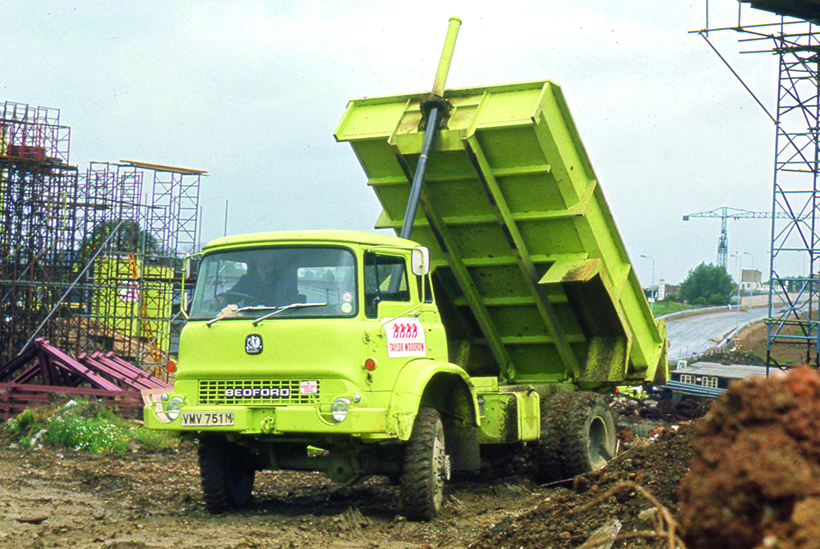 Taylor Woodrow was among the many construction companies to experience the M-type’s amazing off-road performance. This is one of its 1874 MJR1 tippers, seen on a road-building site.

Running on AVTAG, the engine developed 93hp at 2,700rpm, compared to the 330 diesel’s 98hp at 2,600 rpm. An instruction in the military user handbook read, ‘when changing from diesel to other fuels or vice versa the changeover should be carried out by workshop personnel’. In 1981, military versions were given the new option of the 5.4-105TD turbocharged diesel.

Civilian engine choice originally consisted of Bedford’s 300 cu in petrol or 330 cu in diesel; the turbocharged 5.4/105TD being added in 1981. From 1978, the new 500 cu in 8.2/130D diesel became available on special order and, from 1982, petrol-engined models (MFR) were dropped from the UK market due to a lack of demand. However, the petrol engine continued to be available for export. 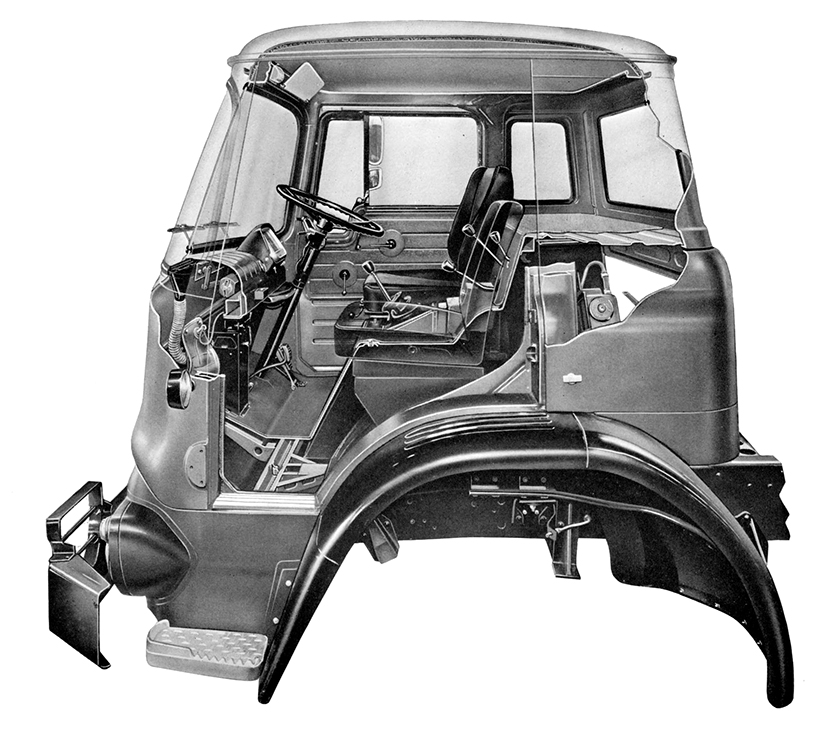 A ‘ghosted’ view of the M-type civilian cab. Like the TK, engine access was via lift-up rear corner flaps.

M-types in public service
As well as being produced in vast numbers for the military, M-types formed the basis of countless, special vehicles for use by the fire and rescue services, civil engineering and recovery services. Short- and long-wheelbase civilian versions were available for the likes of public utilities, such as electricity companies, highway authorities and water companies. When equipped with dual rear wheels, these grossed at 11 tons.

The standard MJR2 had a wheelbase of 156in, while the MJR1 – for tipper bodies – was on a wheelbase of 138in. M-types have even been adapted to artic use, for work such as lime-spreading on agricultural land. One of the M-type’s great strengths was its ability to traverse extreme terrain without losing traction. Its flexible chassis frame and generous vertical suspension travel, ensured good tyre-to-ground contact. 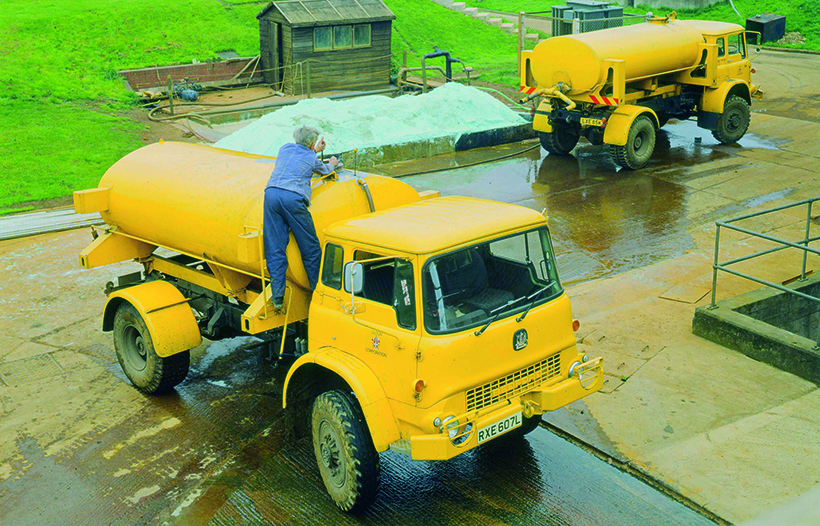 Another important role for the go-anywhere M-type was at the sewage treatment works. These two, dating from 1973, were operated by Luton Corporation. Note the rear ‘super’ single tyres.

One highly unusual civilian variant of the M-type was the Bedford/USG/Pitt front-wheel-drive cable carrier, that was developed jointly by former Vauxhall-Bedford dealer, United Services Garages of Portsmouth, and Pitt Trailers from Barton Stacey, Winchester. Charles Pitt (Barton Stacey) Ltd had earlier perfected a revolutionary design of low-loading semi-trailer, which was marketed as the ‘Alligator’.

It consisted of a frame carrying the rear trailer axle that could be raised hydraulically while the trailer bed was lowered to the ground. The company then came up with a completely new front-wheel-drive rigid low-loader for the transport of large cable drums. Originally developed on the Bedford R-type, USG-Pitt went on to apply the principle to the new M-type. One notable customer for these was the London Electricity Board.

High-profile construction and civil engineering companies, like Tarmac, found the M-type a very versatile machine that was capable of a host of off-road duties.

Unusual applications
Among other unusual applications of the M-type, there were the 6×6 conversions carried out by Reynolds Boughton Ltd, of Amersham. These were available with a choice of three wheelbases – 165, 181.5 and 224in. The chassis layout, from the rear spring front hangers forwards, was in common with the standard 4×4. But new chassis sidemembers were attached from a point just rear of the cab, resulting in a sturdy, flitched chassis frame to take bodies from 20-25ft length, according to wheelbase.

Reynolds Boughton’s own design of a four-spring, non-reactive rear bogie was fitted, in which the leading drive axle was modified to provide a through-drive to the rearmost axle. Both basic drive axles were of Bedford manufacture. There was also a 6×2 option, with a non-driven trailing axle. When fitted with 12.00×20 single wheels all round, the 6×6 could gross 15 tons, while the fitment of 9.00x20s with dual rears, raised the gvw to 18 tons. 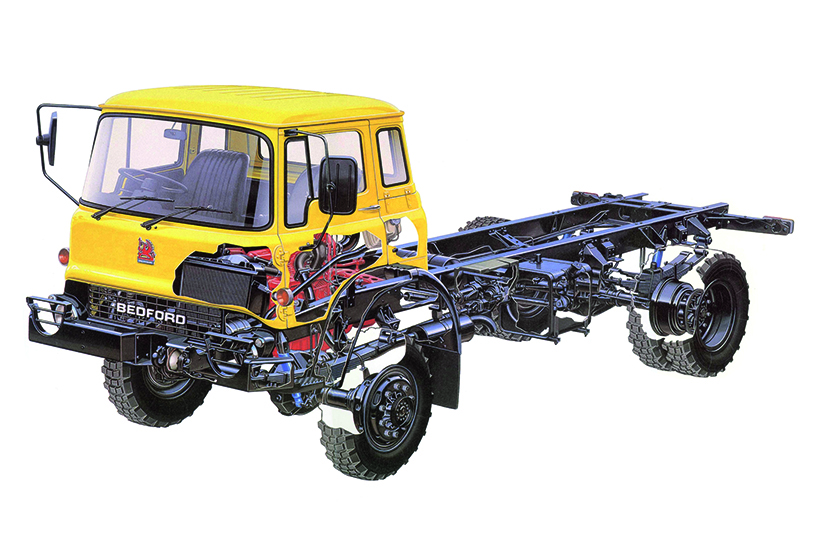 The construction of the latter-day MJR2 is revealed to good effect in this detailed, ‘ghosted’ illustration that was commissioned for the 1982 sales brochure.

The M-type also served as a perfect basis for fire appliances requiring an off-road performance, for tackling bush fires and such like. Leading manufacturers included Cheshire Fire Engineering (CFE), Angloco and HCB Angus. As well as fire appliances, the M-type could fulfil many other roles for councils and public utilities, such as road-gritting, sewage works transport, servicing electricity power lines and vehicle recovery.

So, if the Bedford M-type is remembered for anything, it will be for its vast range of diverse applications, in both military and civilian roles. Altogether, about 44,000 were built and, even today, there are some examples still working hard in various parts the world. 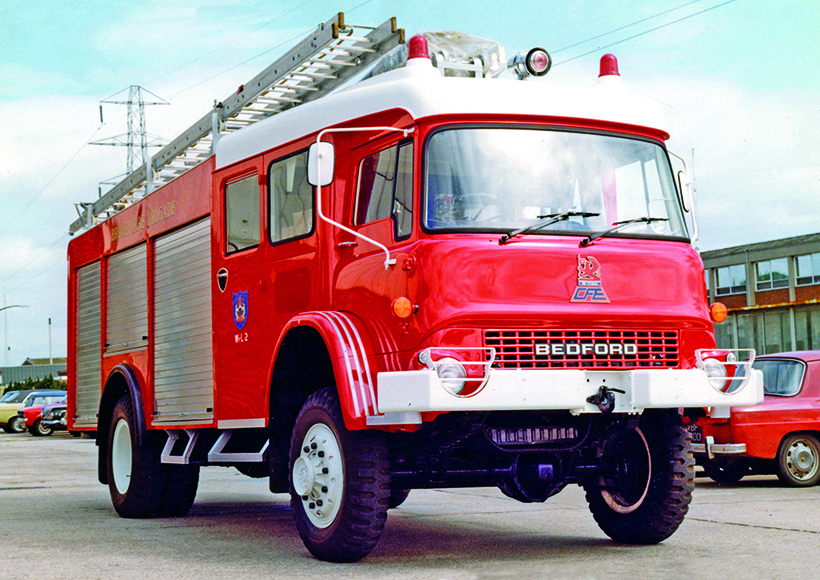 The versatile M-type was in demand for many other roles, not least as a fire appliance, where an off-road capability was required. This example has bodywork by Cheshire Fire engineering. 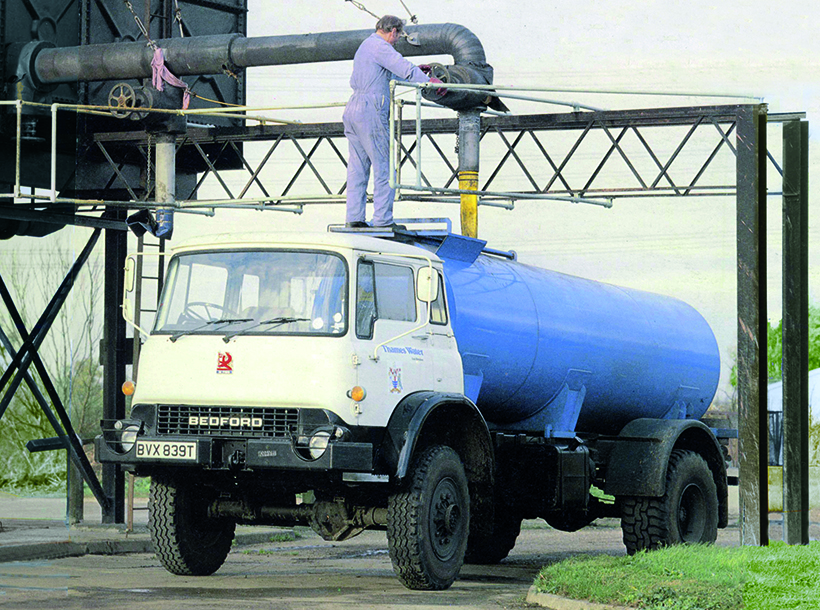 Thames Water was among several UK water authorities to choose the M-type for its remarkable, off-road performance. This M1120 (MJR2) dates from 1978. 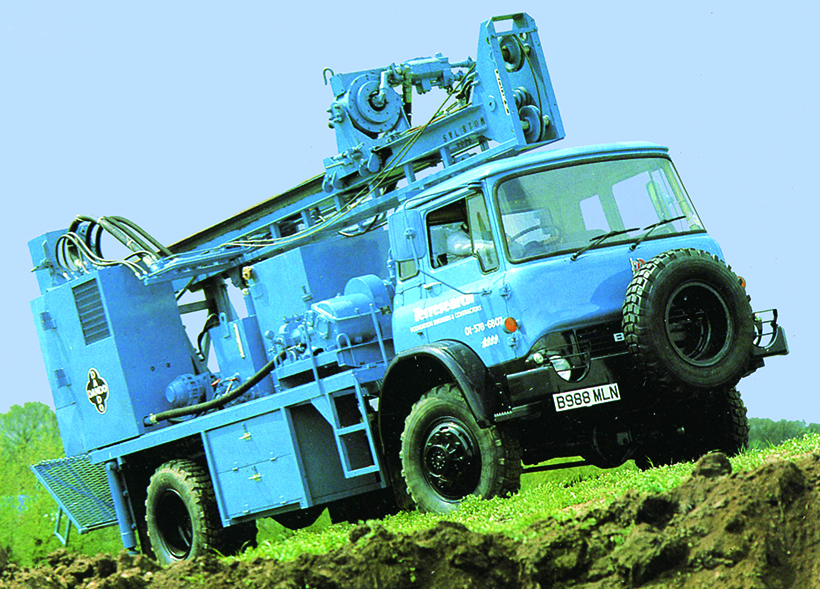 Wherever off-road traction is critical, the M-type scored. Bromley-based Terresearch specialised in detecting the risks to property developers from subsidence, sink holes, etc as a result of mining. 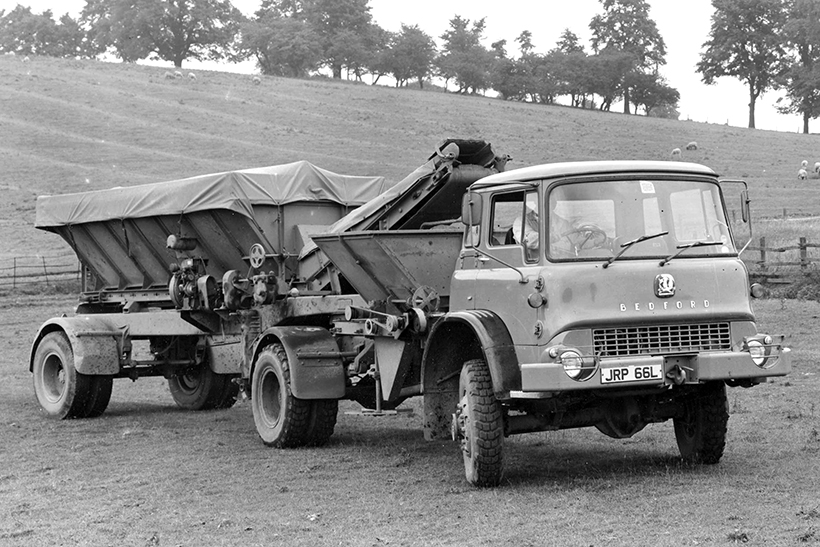 Among the unusual applications for the M-type was this articulated, agricultural lime-spreader, dating from 1973. 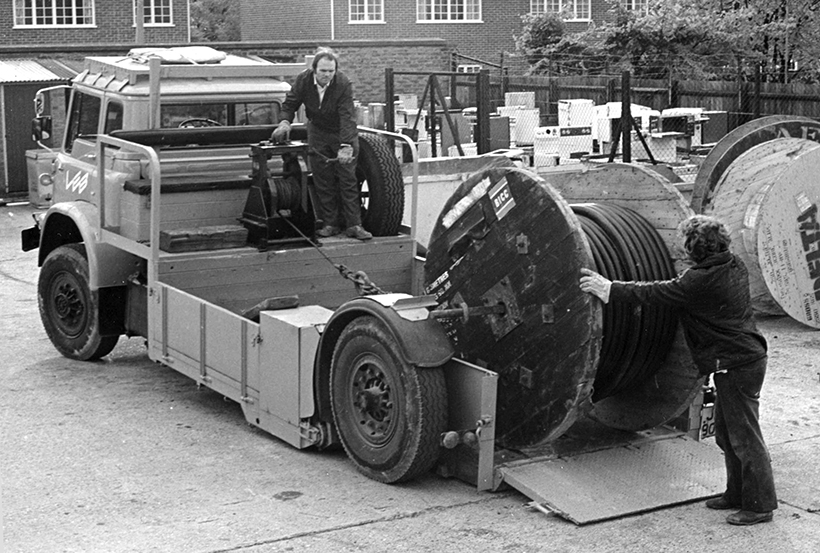 Here’s the highly innovative Bedford/USG/Pitt low-loading cable carrier that was developed jointly by Bedford dealers USG of Portsmouth and Pitt Trailers of Barton Stacy, Winchester. The idea had earlier been successfully applied to the Bedford R-type. 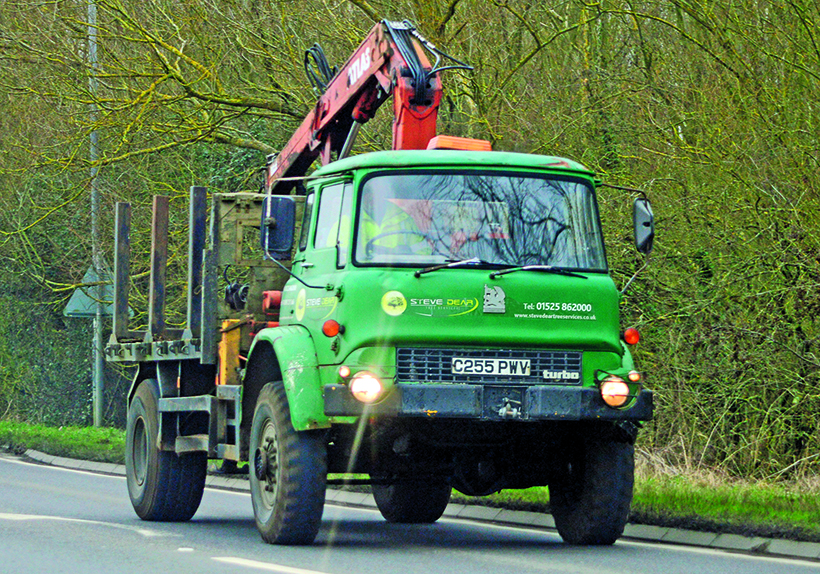 Longevity of service is one of Bedford’s strengths, and this 1985 M-type of Bedfordshire tree surgeons Steve Dear, illustrates this perfectly – it was still going strong in 2020! 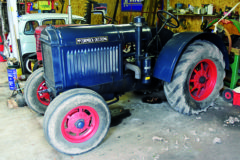 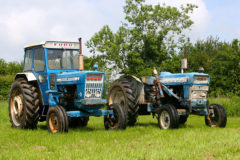