Bob Weir enjoys a trip to Scotland to spend a few hours with Roy MacGregor and his classic McCormick-Deering and Farmall tractors. 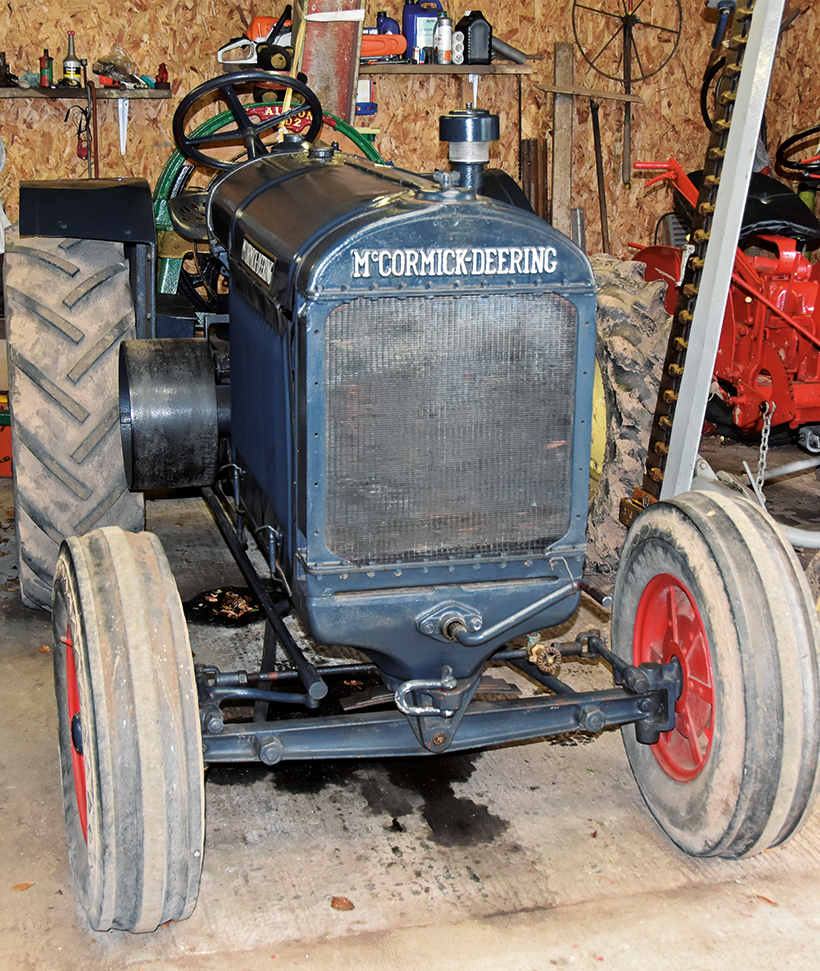 McCormick-Deering and Farmall tractors: The 10-20 was a smaller version of the 15-30, and was popular with farmers.

Roy MacGregor lives in Dumfries and Galloway, and has been collecting tractors for many years. Apart from his pair of old veterans, he owns a Massey-Harris Pony, a Case DC4, a couple of post-Second World War Renaults, and an International B-275, which was his first in the collection he started back in 1999.

He said: “I’m old enough to remember the days when farms brought in steam traction engines at harvest time. Things were different back then, and there was probably more of a community spirit. My family was allocated one of the Lend-Lease tractors during the war. As I recall, it was a Fordson N. A lot of farms were still using horses to work the land, but a change was on the way.” 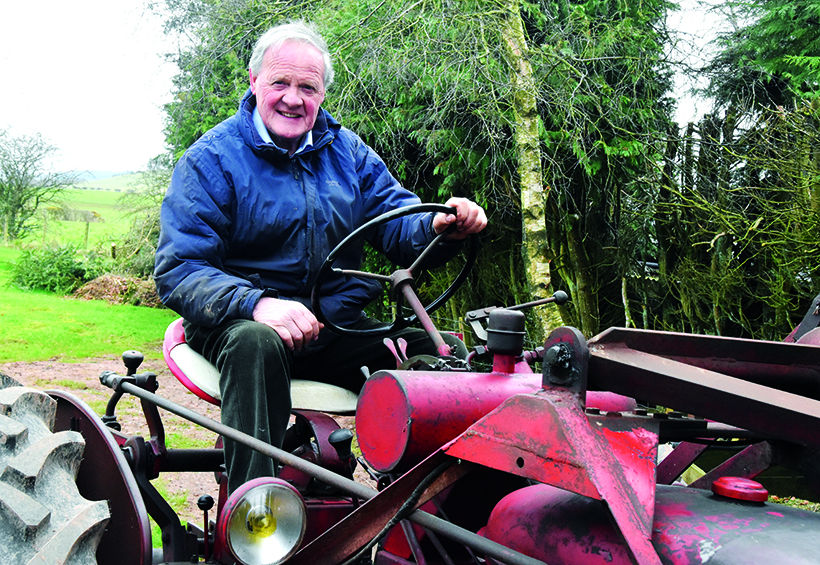 Roy says that it’s great owning a tractor like the Farmall, and it’s good fun to drive, too!

Roy eventually stepped back from farming and got involved in several interesting hobbies. His family had always kept horses, and he competed at point-to-point, and rode with the local hunt. Then he took up motor racing, which eventually led to him competing at venues like Silverstone and Scotland’s racetrack, at Knockhill.

McCormick-Deering
Roy particularly likes his 1928 International McCormick-Deering 10-20, which he bought in Bedford, England. He explained: “According to the owner, it had come over from the US, and the machine is still wearing American-type tyres. It refused to start, which wasn’t very encouraging, but I took a chance and went ahead with the purchase.” 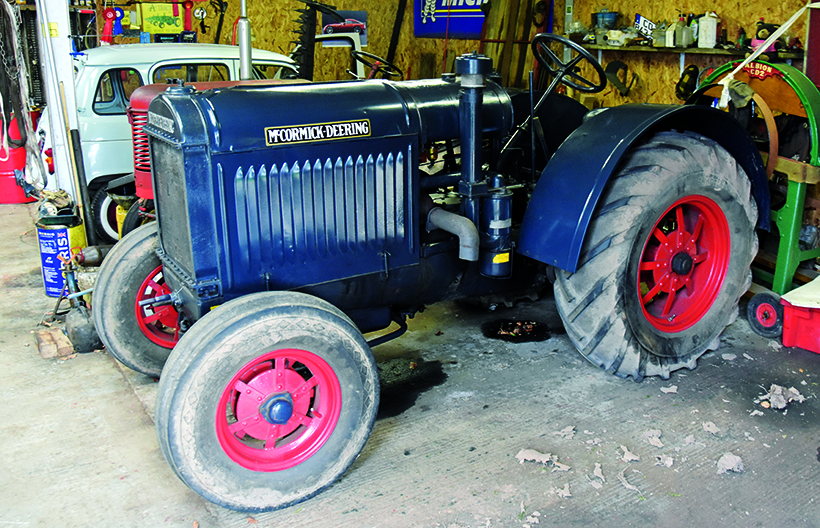 When it was first introduced in 1917, International’s 8-16 was quite advanced by contemporary standards. Unfortunately, the machine’s separate chassis and chain-drive set-up looked crude compared to its major competitor, the much cheaper Fordson. Fast-forward to 1921, and the new model 15-30 answered both these criticisms. The tractor was built with a stressed chassis, and the final drive was properly enclosed in an oil bath. A comparison between the two machines also showed just how quickly tractor technology was developing. The 15-30 could do the same work as its predecessor, weighed substantially less, and cost half the price.

Other advantages
There were other advantages, too. The new tractor had a covered-in engine and driveline, and International offered a lifetime guarantee on the ball-bearing crank. The cylinders also had replaceable liners, which improved maintenance and servicing. 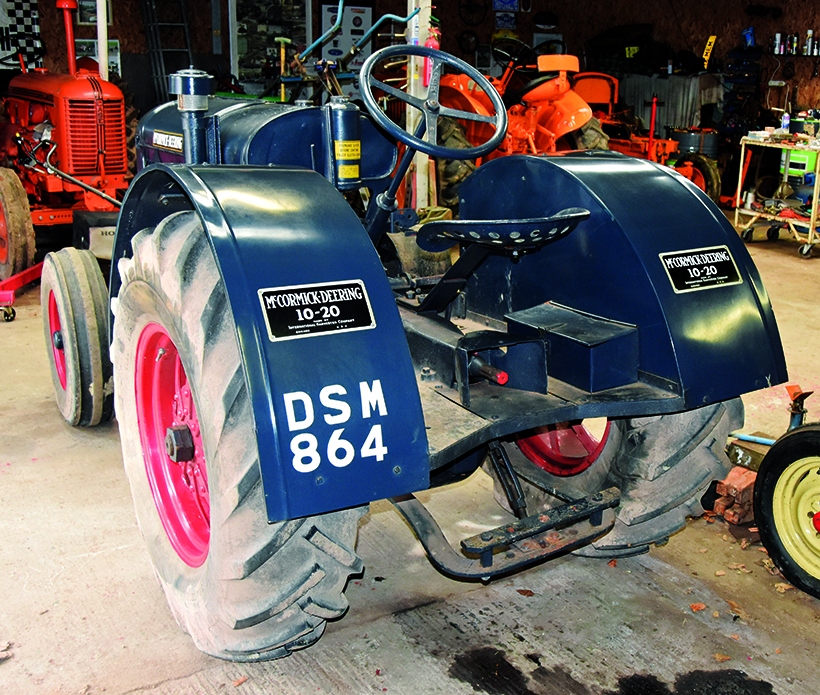 Despite plenty of encouragement, Roy’s tractor refused to start, and had to be photographed in situ. A reminder of the day he went all the way to Bedfordshire to buy it!

The model 10-20 took these improvements a stage further, and was basically a smaller version of the same concept. First introduced in 1923, the tractor was fitted with a more efficient 283.7 cu in, four-cylinder engine coupled to a three-speed transmission. The design was very successful, with more than 215,000 10-20 tractors leaving the assembly line before production ended in 1939.

Roy recalls: “Fortunately, the McCormick was basically sound and in good condition, although I had to fix the magneto. Other than that, it just needed a good service. I’ve taken it ploughing a few times, and it performs OK. There aren’t too many 10-20s north of the Border, and it attracts a lot of interest.” 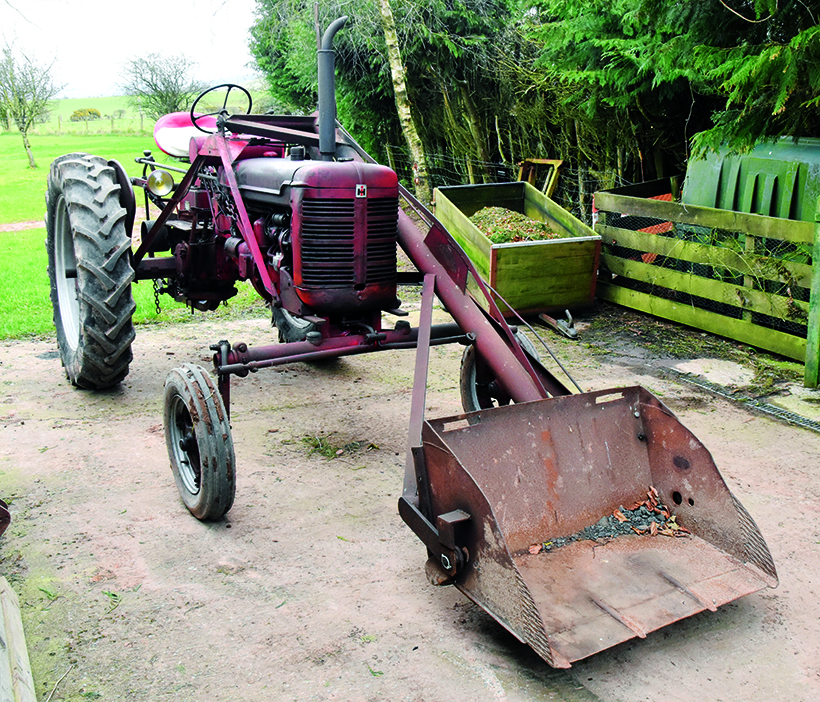 The Super FC was the French version of the tractor. The loader isn’t just for show, and Roy has used the tractor for the occasional job.

Hands-on
“I’m happy to tackle most things, except major jobs like rebuilding engines,” he added. “I’m familiar with clutches, transmissions and similar types of parts. I also had plenty of experience working on vehicles in the old days, when I was racing cars. Most of the tractors that were built around wartime were reasonably straightforward. The only issue is getting hold of the right parts.”

Roy prefers to take his time with any job, so that the work is done properly. He’s also aware that some older tractors are getting thin on the ground, and need to be preserved for posterity.

Large-diameter rear tyres were a feature of the Super C.

“The 10-20 is a fine machine and it’s great fun to drive,” he said. “Unfortunately, I went a bit overboard with my collecting, and a lot of the tractors I now have spend most of their time sitting around gathering dust! Old machinery starts to deteriorate when it’s not being used, so I might be tempted to sell the McCormick-Deering if the right offer comes along.”

Farmall Super
The other old International in Roy’s collection is a French-built Farmall Super FC. “The tractor is the French version of the Farmall Super C,” he explained. “The main difference from the American-built version was the addition of a diesel engine, which was introduced to meet the needs of European farmers. 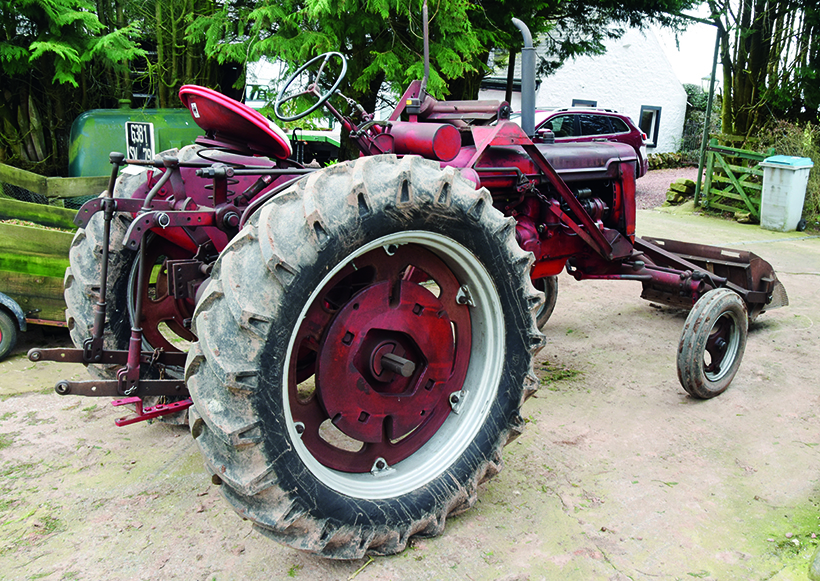 There’s been speculation that if IH had licensed the Fast-Hitch to other companies, the system might have become the industry standard, rather than Harry Ferguson’s three-point hitch.

“My tractor used to belong to well-known enthusiast John Pearson. He was living in France at the time, and put his tractor collection up for sale. The Super FC was in fair condition, and all I’ve done is clean it up. The engine is still a runner, and the rest of the tractor is mechanically sound.”

The original McCormick Farmall C was introduced in 1948, as a replacement for the McCormick Farmall B. The C was a larger, heavier tractor than the B, and its four-cylinder, 113cu in petrol engine could run at 1,650rpm, instead of the B unit’s 1,400rpm maximum. 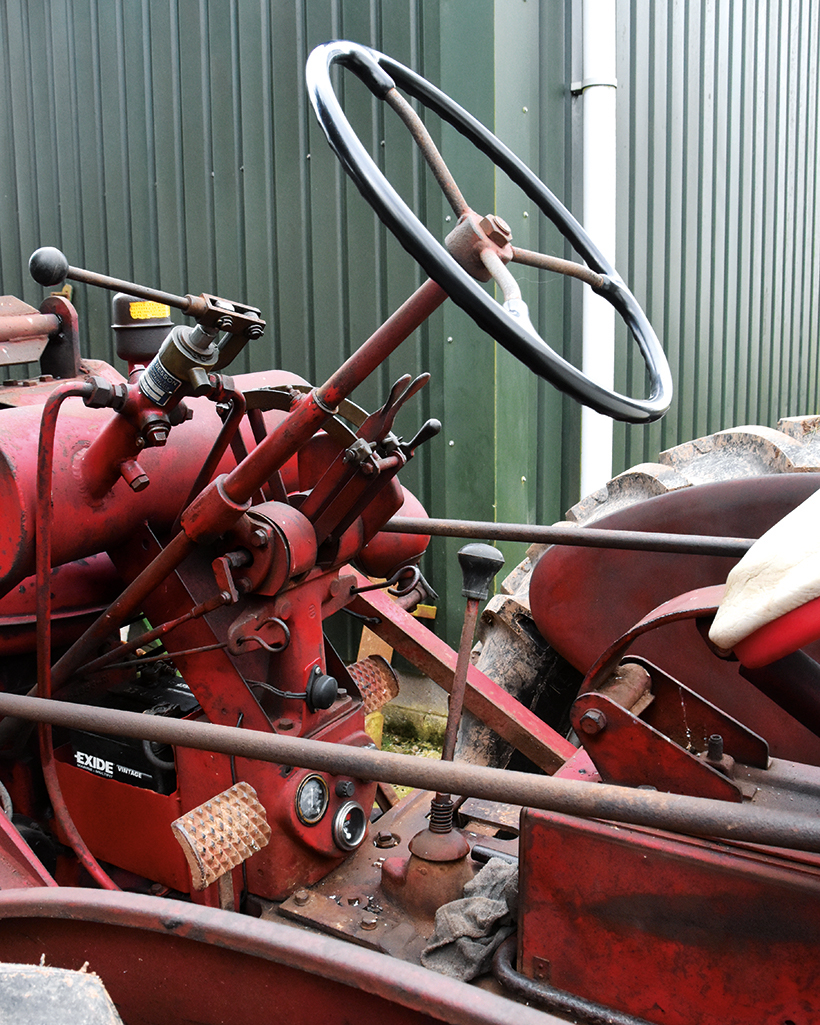 The operator had good visibility with all the controls close to hand.

Unlike its predecessor, the tricycle C was designed from scratch, and featured straight axles and larger-diameter rear wheels, which were adjustable along a bar axle. The straight axles were an important component in the tractor’s design, as they made it easier to change the tread width.

Touch-Control
The operator’s seat was located above the drive train for good visibility, and the tractor was equipped with the Touch-Control hydraulic system. However, it faced stiff competition from the Case VAC, Oliver 60 and John Deere MT. So, to improve the model’s appeal, International Harvester enlarged the engine, and transformed it into the Super C.

Introduced in 1951, the Farmall Super C was the second model in International’s Super Series. These tractors were produced between 1947 and the early 1960s. The Super Series was basically an upgrade of the Letter Series, and featured improvements over the existing models. The tractors largely followed the design of their predecessors, and were also built to last.

The Super C looked the same as the regular C, apart from a white, circular ‘Super C’ logo on both sides of the bonnet. The improvements made were mechanical, and the engine was uprated with a larger bore. This increased the unit’s displacement from 113 to 123 cubic inches, and boosted output at the belt to 24hp. 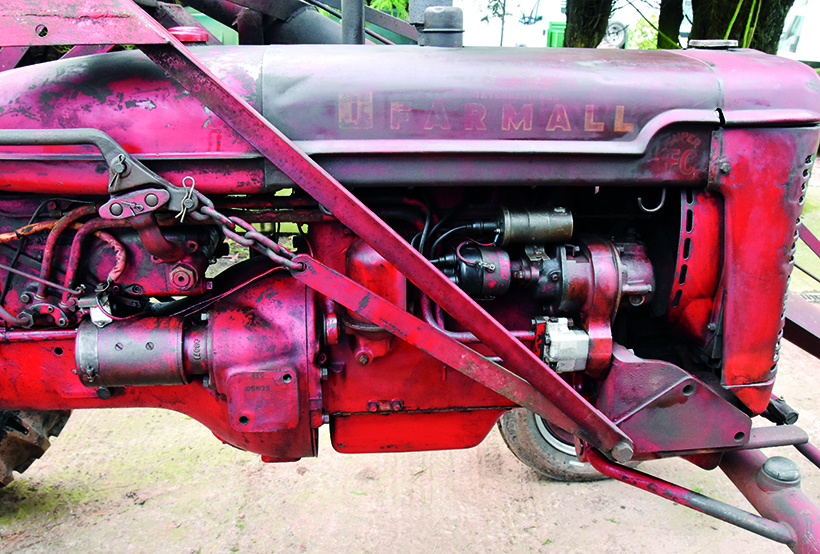 A diesel engine was used on later versions of the Super FC, although Roy’s tractor is fitted with the standard, petrol-powered unit.

Fast-Hitch system
But what made the Super C stand out from the crowd was International’s Fast-Hitch system, introduced in 1953. This was a quick-connect, two-point hydraulic hitch that came with a range of suitable implements.

The Fast Hitch comprised a yoke at the rear of the tractor which featured two flared sockets that could be raised or lowered hydraulically. The purpose-made implements had two tapered beams, which fitted into the sockets. Once they were in position, spring-loaded latches made a rigid connection. To detach the implement, the driver lowered it to the ground, lifted the latches, and drove away.

The front of the Fast-Hitch yoke extended under the tractor. It was connected to a Touch-Control power arm that could either be raised or lowered to change the location of the draft point. The left side of the hitch was connected to another Touch-Control power arm, which was used to tilt or level the implements. A hydraulic cylinder, located at the rear of the tractor, raised and lowered the implements.

“The Super FC was built at the St Dizier plant, near Paris,” Roy explained. “Early tractors like mine were all petrol models. I’ve been told that in the immediate post-war years, tractors sold in France were only allowed to run on petrol. However, diesel engines were popular with farmers, and they got around the problem in the short term by fitting Lavalette pumps to convert them to diesel. Common sense finally prevailed, and an official diesel version of the Super FC – fitted with International’s FD-123 engine – was eventually made available.”

The Super FC is a rare beast in the UK, and Roy’s tractor won the Original Vintage 1952-64 category at the 2019 Tractor World Scotland show at Ingliston, near Edinburgh.

If anybody would like to contact Roy about buying any of his tractors, his mobile number is 07850 250806. 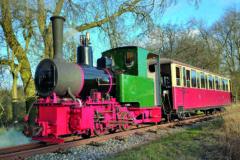 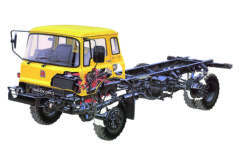