90th anniversary Bedford celebration: There was something Bedford-related for everyone at this amazing event!

Would it happen? Would it not? It wasn’t looking a certainty and then, success! There was no doubt among the faithful that the carefully-planned, three-day 90th anniversary Bedford celebration would go ahead would go ahead – so many people were determined about that – but, as it turned out, it was only just!’ 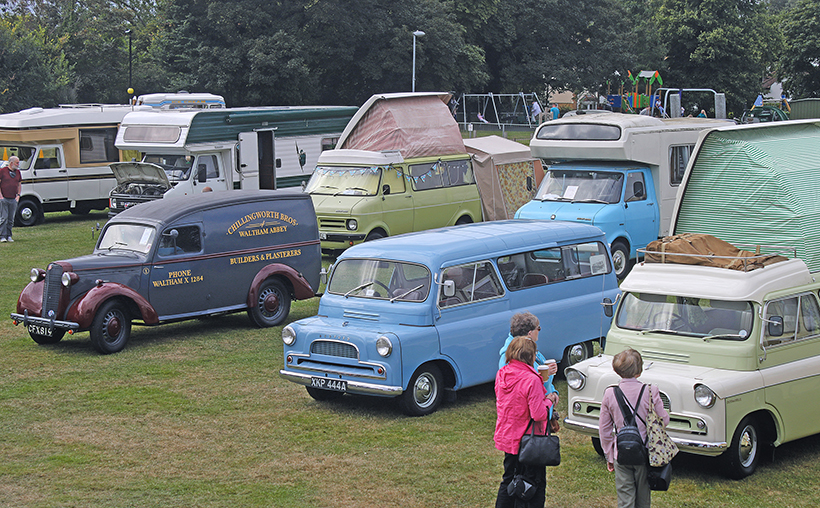 “We were determined to get 90 vehicles in attendance at Bedford 90, and did everything we could to appeal for people to come along.” explained Christine Thomas of organisers, the Bedford Enthusiasts Club. “It was absolutely brilliant. In the end we had 93 Bedfords, with one of just about every model,” she added. “We would like to thank everyone – even the two young security guards who looked after the site. 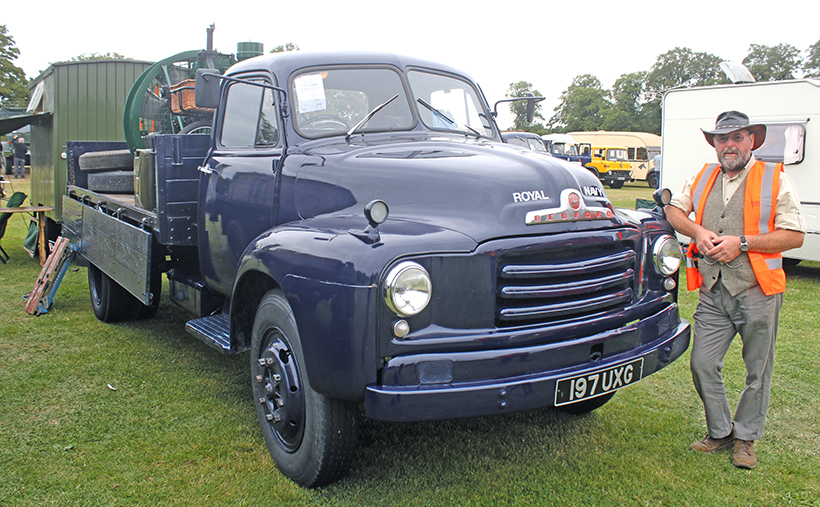 Bedford 90 took place at Pages Park, Leighton Buzzard, in Bedfordshire, over the August Bank Holiday, and definitely produced variety! It’s always brilliant to see younger enthusiasts with older commercials, and here is definitely an extreme case! Louis Bradshaw, 21, brought along the much-cherished 1935 Bedford WLG that he’s owned for three years. “My grandad used to have lorries and there’s just something about older vehicles such as this one,” Louis told me. 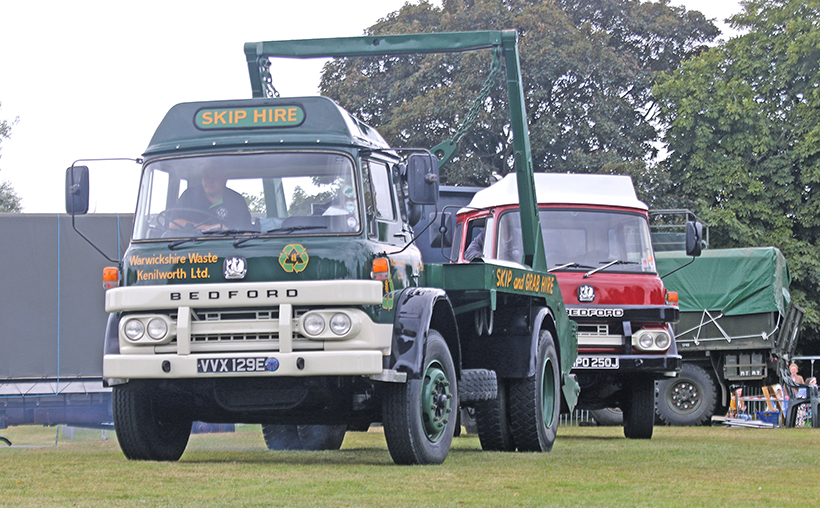 Magnificently restored Bedford KM skip lorry of Warwickshire Waste. A full feature on this, and others from the owner’s collection, is coming up in a couple of months.

Graham Halsey has owned his 1976 Bedford CF since 1979 – and made one or two changes during that time! Power is now provided by a Rover V8 engine, the van stands around nine inches higher thanks to a mixture of uprated springs and spacers, there’s a much-modified interior and a paint job that Starsky & Hutch would have been proud of. “I’ve always liked something a bit different, and joined the National Street Van Association in the 1980s, which encouraged the work on this van,” explained Graham. 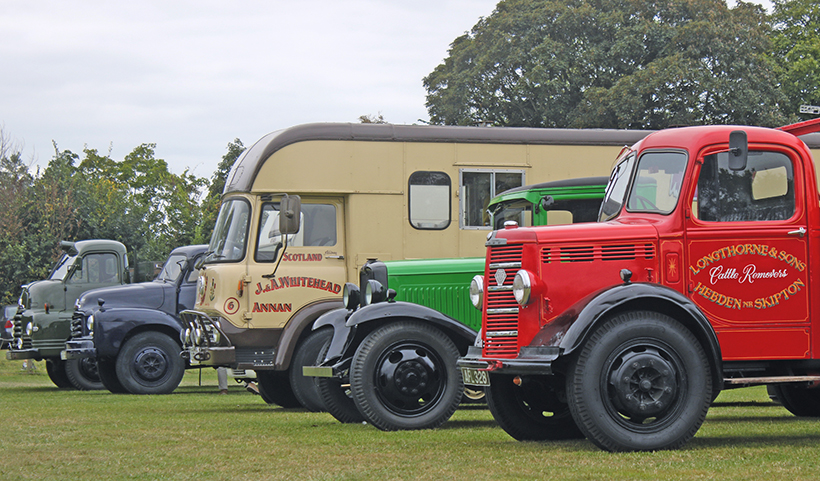 More proof of just how varied the selection of Bedfords was at this anniversary event.

Another light commercial attracting much interest was Michael Walker’s 1962 Bedford 12-seat Dormobile, new to Dependable Deliveries in Folkestone. After being involved in an accident, the Bedford was bought by Michael’s dad, and repaired. Dave Freed’s 1935 Bedford WLG was making is first rally appearance after a superb restoration. New as a dropside, the Bedford had ‘a sort of house put on the back and had then been left mouldering’ before Dave bought it. The two-year restoration included a new pantechnicon body, constructed with the help of Dave’s brother, Brian, who is a sheet metal worker. 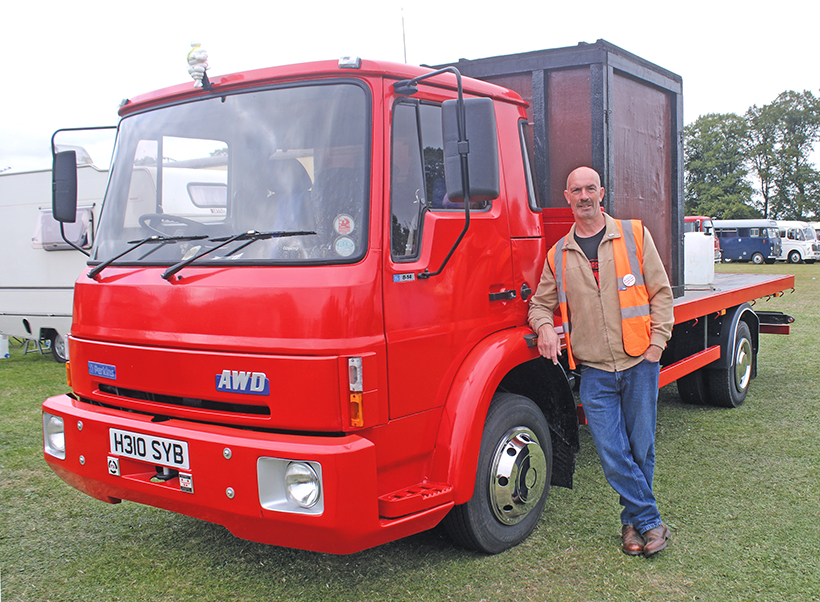 Carl Lemon’s AWD is one of a dwindling number of survivors of this model.

A rare vehicle nowadays was the newest lorry at the show, Carl Lemon’s 1989 AWD. The vehicle, which has a Perkins Phaser engine and Spicer gearbox, is believed to have been new as dealer stock, a year later being sold and fitted with a horsebox body, but Carl has converted it to a flatbed and repainted it bright red. “AWDs are getting really scarce, We think there’s around 100 in existence and the total is continuing to drop,” he told me. 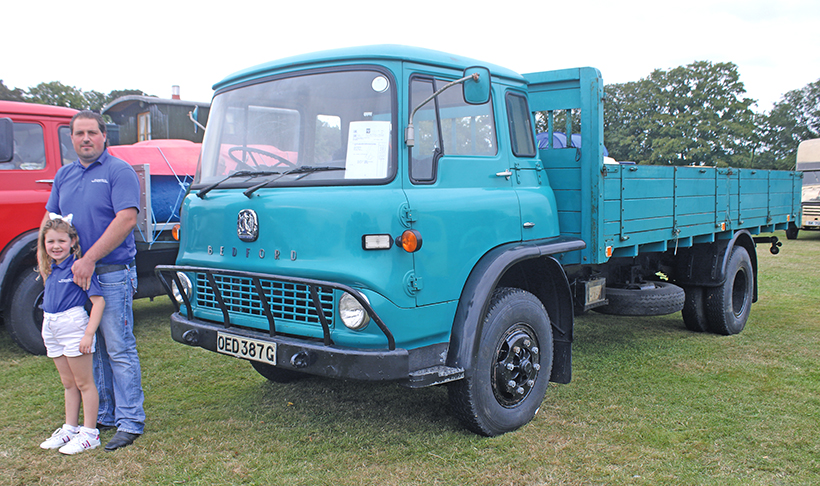 This 1969 Bedford TK, seen with owner Robbie Ralph and daughter, Rhianna, has never been restored. It was new to J Marsh, of St Helens.

Another rarity was Brian Smith’s extraordinary, 1973 Bedford TJ Packhorse, with four-wheel-drive conversion by Reynolds Boughton and a crew cab, A 300 petrol engine is fitted. “I wanted a big Bedford, but I wasn’t expecting this!” said Brian. 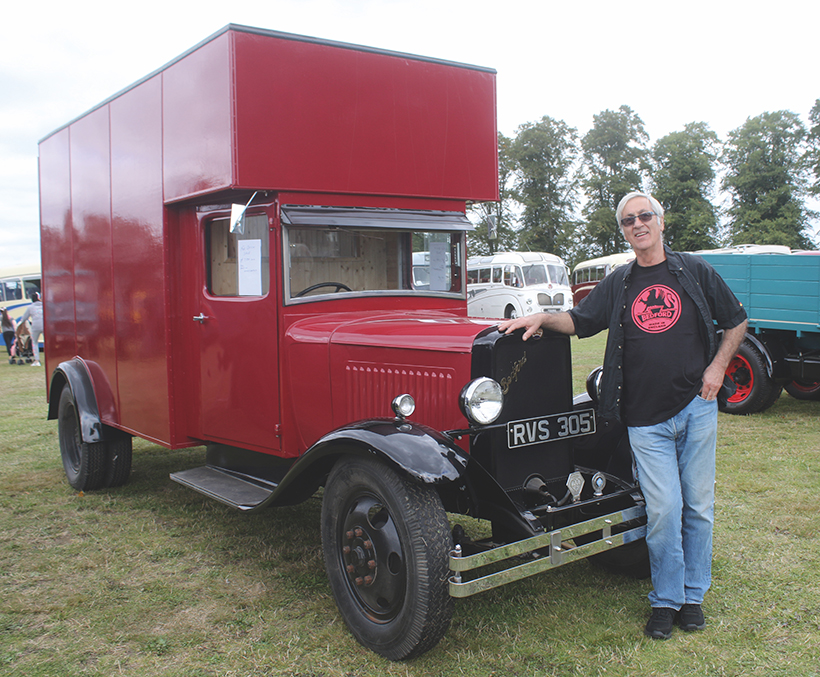 John Kilby displayed two superb Bedford horseboxes. GRD 859 is a 1952 OLAZ model with Vincents of Reading bodywork, and has done just 33,000 miles from new. Bedford A-Type BK 7126 was originally registered SAD 60, when new in 1956, and carries Lambourn bodywork. “It’s been languishing in a barn since the Bedford Gathering of 2005, collecting dust and requiring further attention, which was inspired by Bedford 90,” said John. 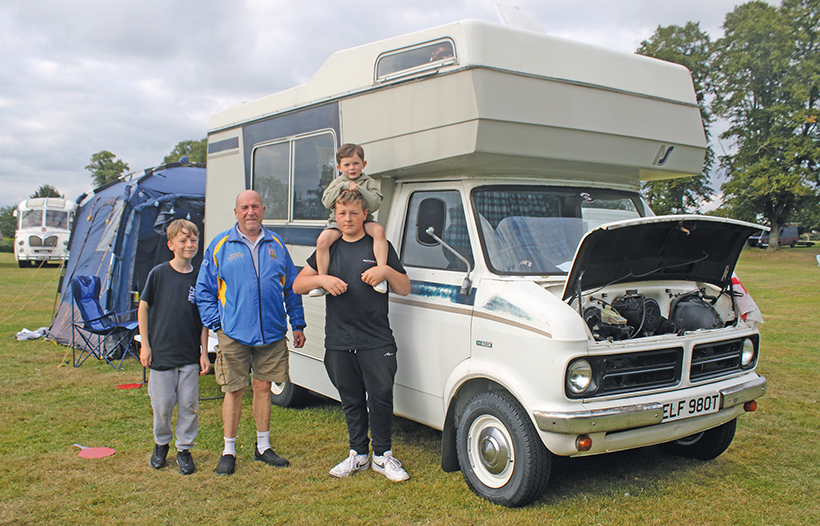 Jeff Barnes, seen with supportive family members, acquired this 1978 Bedford CF recently from a friend who’d owned it for 30 years. “He wanted it to go to a good home, and be looked after,’ Geoff explained.

So, whatever your Bedford taste, from WT to Astra van, there was something for you at this this superb event. The Bedford Enthusiasts Club caters for all examples of the marque, with everything from a regular magazine to rallies and advice, and you can find out more by clicking here: bedfordenthusiastsclub.com 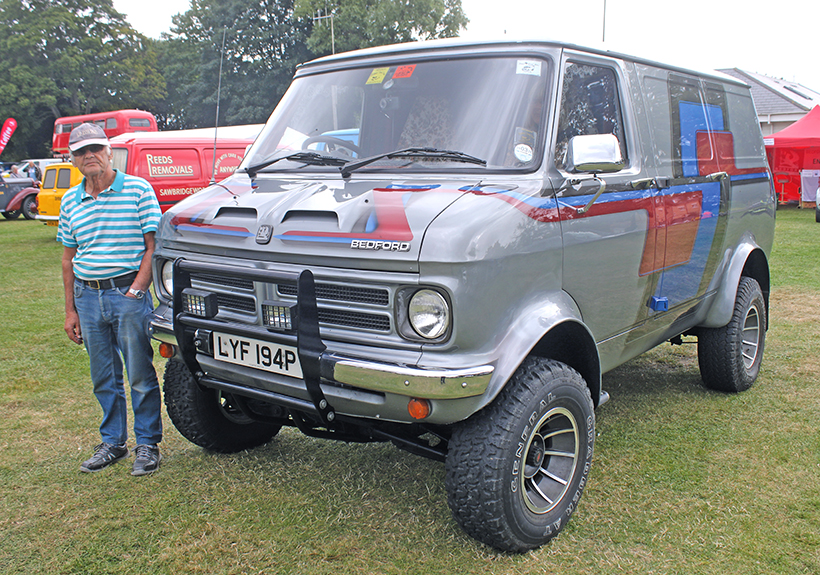 Graham Halsey has owned his 1976 Bedford CF since 1979 – and has made one or two changes since! 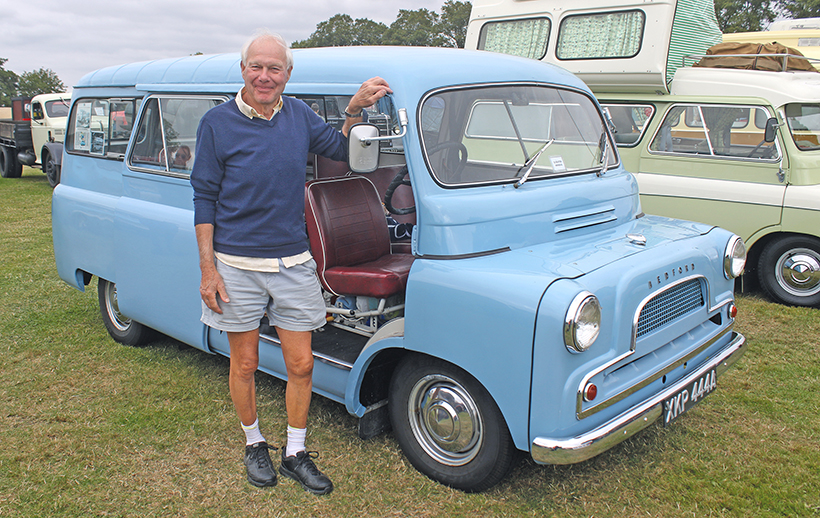 This Bedford CA has been in Michael Walker’s family since his dad bought it with accident damage in the early 1960s. 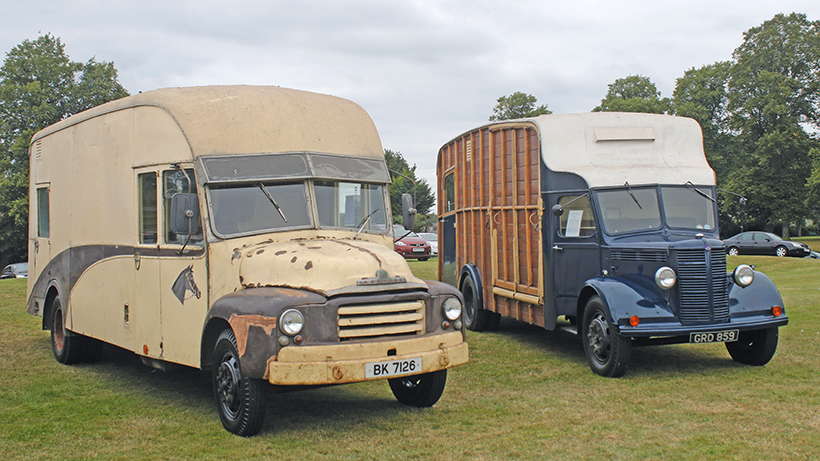 Don’t spare the horseboxes! This fine pair was displayed by John Kilby. 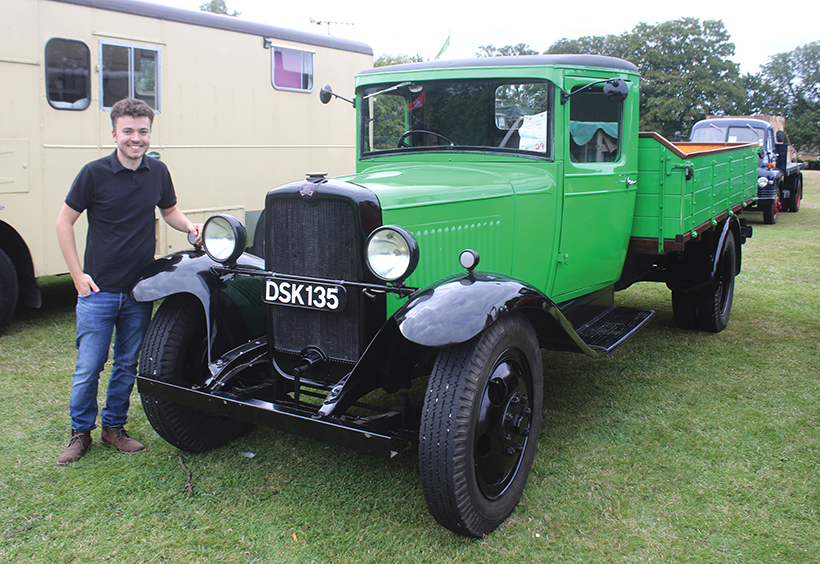 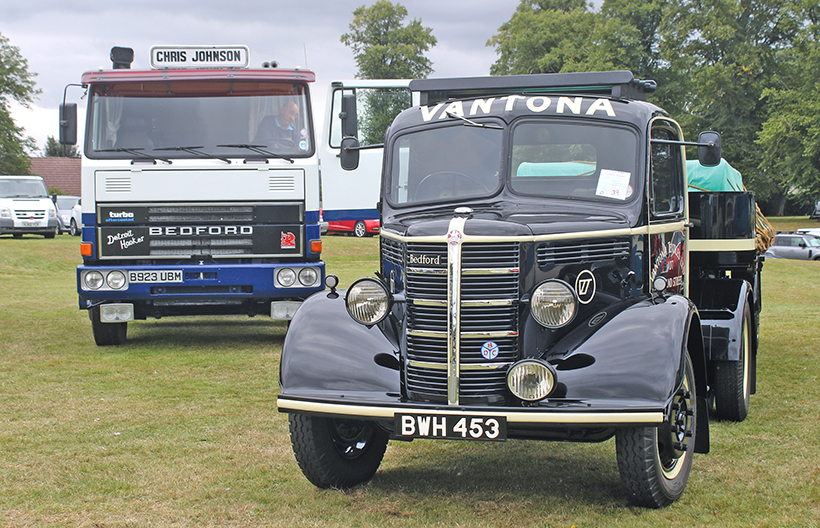 Size matters! Chris Johnson’s new to Vauxhall Motors Bedford TM towers over a Bedford OXC/Scammell tractor unit BWH 453. Operating for Vantona Textiles in Manchester from 1946 and 1953, it was restored by Andrew and Bill Usher, is a past CVC cover feature, and still looks as good now as when we last saw it in 2015. 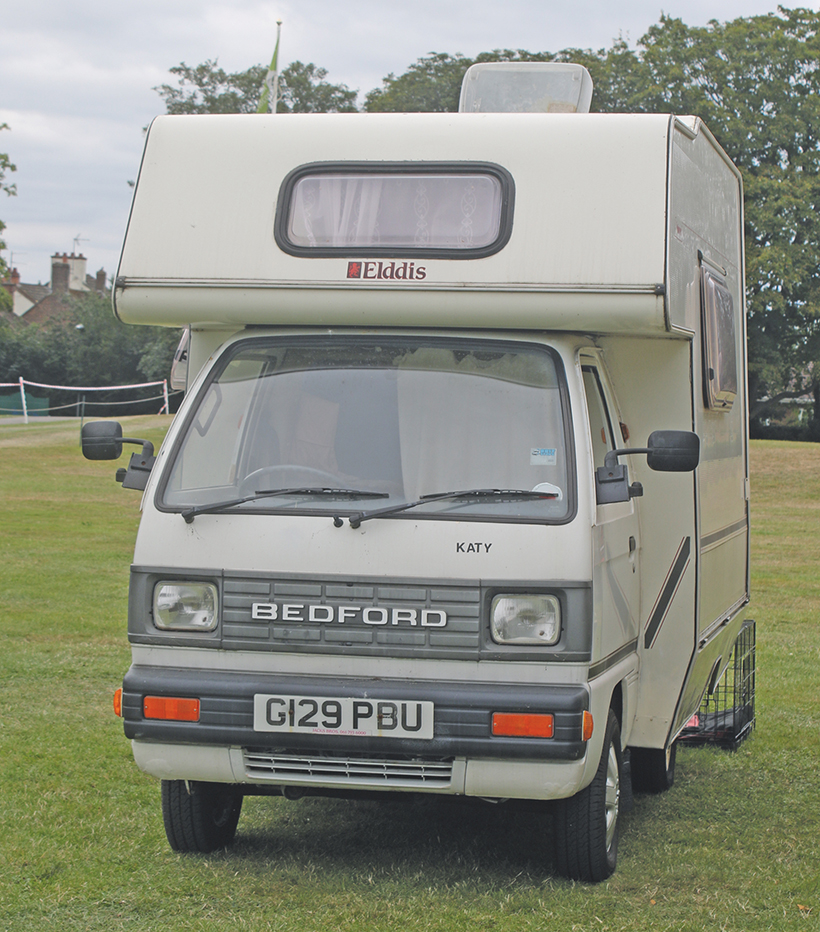 Small but creating much interest was this Bedford Rascal camper. 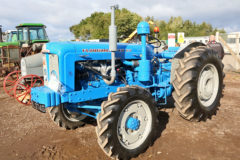 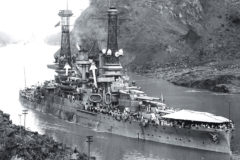