Simon Colbeck reports on the Timeline Events-organised photographic day which took place during the Amberley Museum’s Steam Show in July. 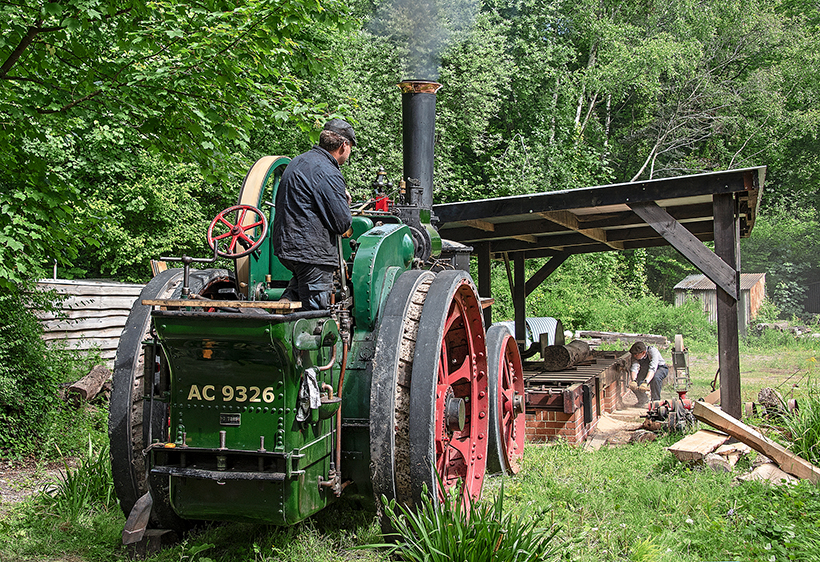 The superb collection of transport-related buildings at the museum provided a perfect backdrop for the seven participating road steam exhibits.

Situated in the beautiful South Downs countryside in south-east England the Amberley Museum is located within the former Amberley chalk quarry. Historically an important source of lime for mortar and agricultural uses, Amberley had its own kilns, the remains of which can be seen today in the museum grounds. 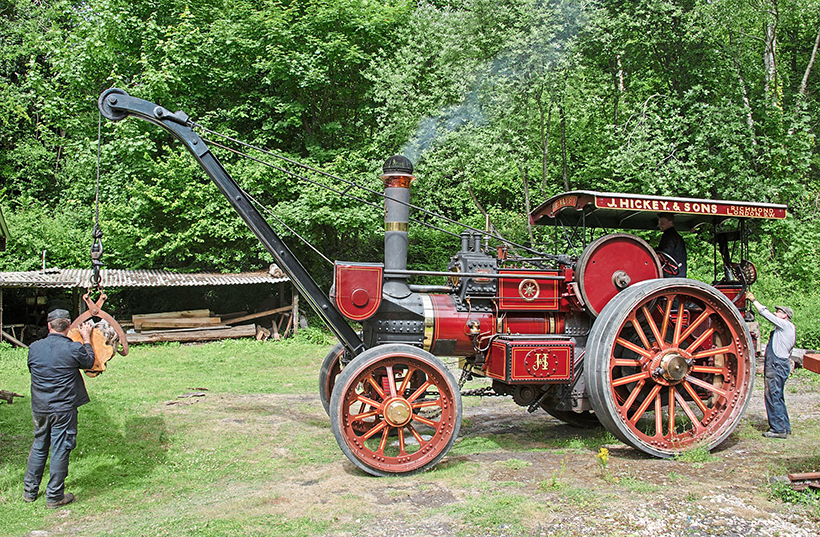 Burrell crane engine No. 3829 of 1920, His Majesty, surrounded by trees, carefully positions uncut timber ready for the saw bench.

In addition to the road steam exhibits, the museum’s 2ft gauge railway was in operation and featured a return to steam of Bagnall No. 2067 of 1918 Peter. The locomotive has been the subject of a major, three-year overhaul which included extensive boiler work and mechanical repairs. The Bagnall saddle tank was originally built for the Ministry of Munitions to 3ft gauge, and worked for the Canadian Forestry Corps in Cumberland. After the war it was re-gauged at Bagnall’s Stafford works to 2ft gauge, and sold to the famous Cliffe Hill Granite Co railway, in Leicestershire. 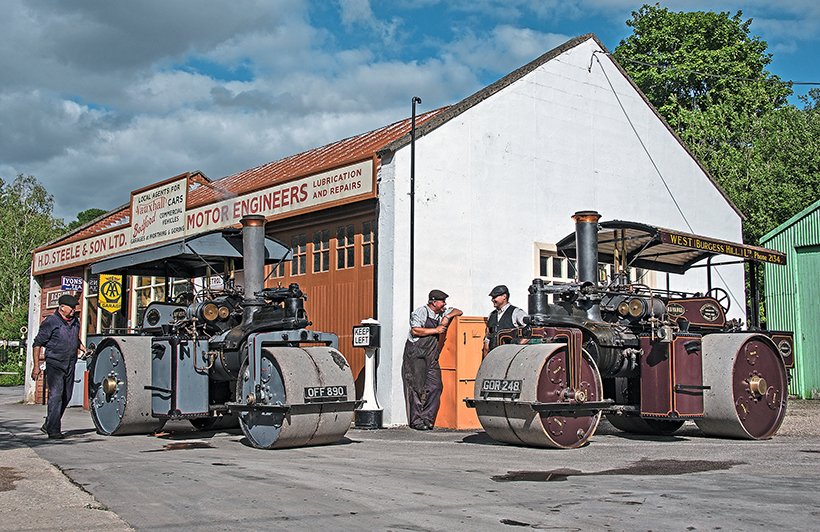 Twin Wallis Advance rollers (Nos. 8104 and 8105) of 1936 sit outside the delightful period petrol station at the Amberley Museum.

An Amberley resident for nearly 40 years, the museum is rightly very proud to have Peter back in steam again. Also operating on the 2ft gauge railway was the other resident Bagnall, No. 1781 of 1905, Polar Bear. Originally built for the Isle of Man’s Groudle Glen scenic railway, the tiny Bagnall returned to the mainland after the closure of the Groudle Glen in 1962. A mainstay of the railway since 1983, and the subject of a number of major overhauls, the engine is due to be stopped again later this year for yet another major refit. 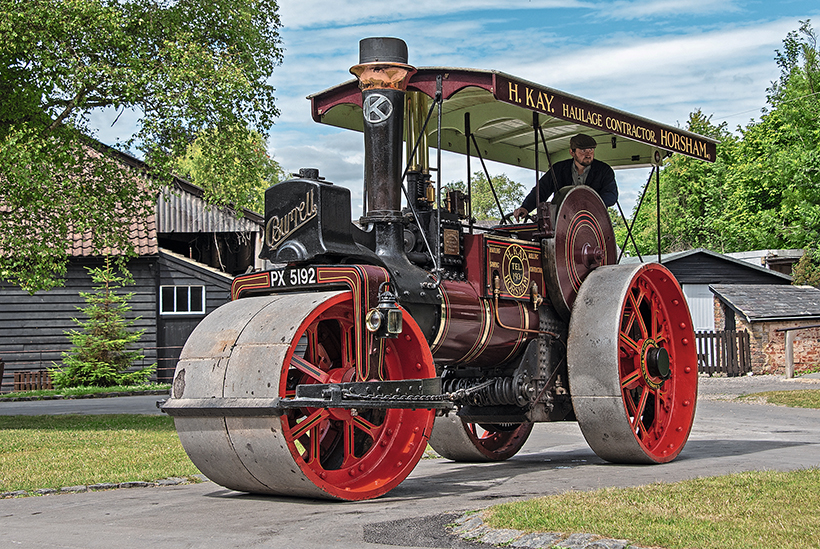 Robin Marshman waits for traffic on his 1926 Burrell single-cylinder roller (No. 4058).

The sawmill was busy with Garrett No. 29764 of 1911 Olive working the saw bench. Toby Robinson on 1920 Burrell crane engine No. 3829 His Majesty kept the team fed with uncut timber for the bench to tackle.

Amberley’s resident twin Wallis Advance rollers No. 8104 and 8105 of 1936 were in constant action showing their surprising turn of speed on the museum’s road system. Here 1886 Marshall Victoria, Empress of India (No. 14242) is about to cross the 2ft gauge railway while, in the background, 1918-built Bagnall Peter sits a the head of a train of tipper wagons.

Burrell No. 4058 of 1926 presented a far more traditional form of roller and was, of course, turned out in immaculate condition by proud owner Robin Marshman.

Another engine renowned for its superb condition in attendance at Amberley was 1886 Marshall No. 14242 Victoria, Empress of India. This beautiful single-cylinder traction engine looked so at home in the period surroundings of the museum. 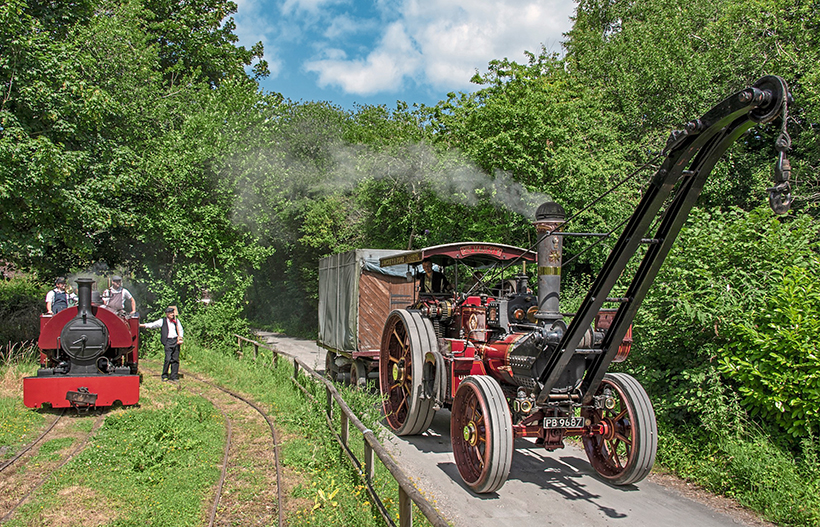 Steam on road and rail: 1920 Burrell No. 3829, His Majesty, passes the delightfully overgrown narrow-gauge sidings with 1918 Bagnall No. 2067 sitting among the dandelions.

On a delightful summer day, the sight of 1910 Tasker steam tractor No. 1424 heading off down a country lane without a modern car in sight really summed up the appeal of this event. The team at Amberley – and the engine owners – certainly put on a splendid day’s entertainment. 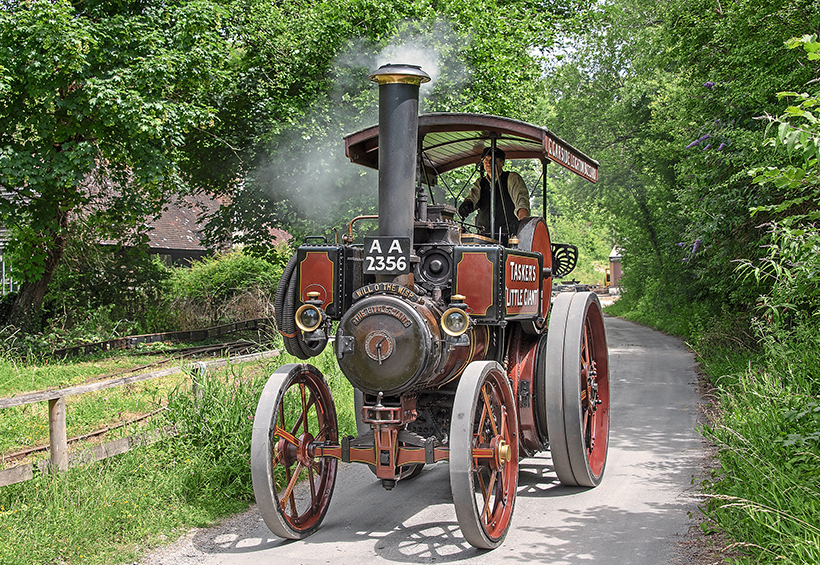 Here’s the 1910 Tasker steam tractor (No. 1424) Will o’ the Wisp, with its distinctive pannier tanks in a lovely leafy lane. 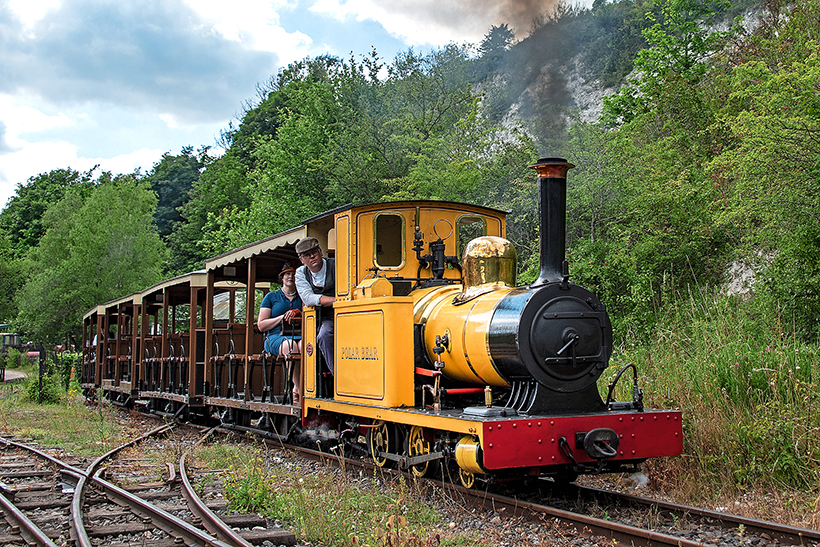 The tiny 1905 Bagnall, Polar Bear (No. 1781), storms out from the station. Originally built for the Isle of Man’s Groudle Glen scenic railway, this 2-4-0T engine is about to come out of service for an overhaul.

With thanks to Timeline Events.

The report comes from the latest issue of Old Glory, and you can get a money-saving subscription to this magazine simply by clicking HERE 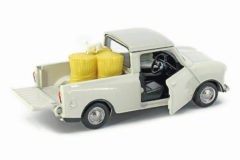 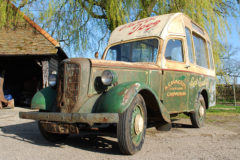