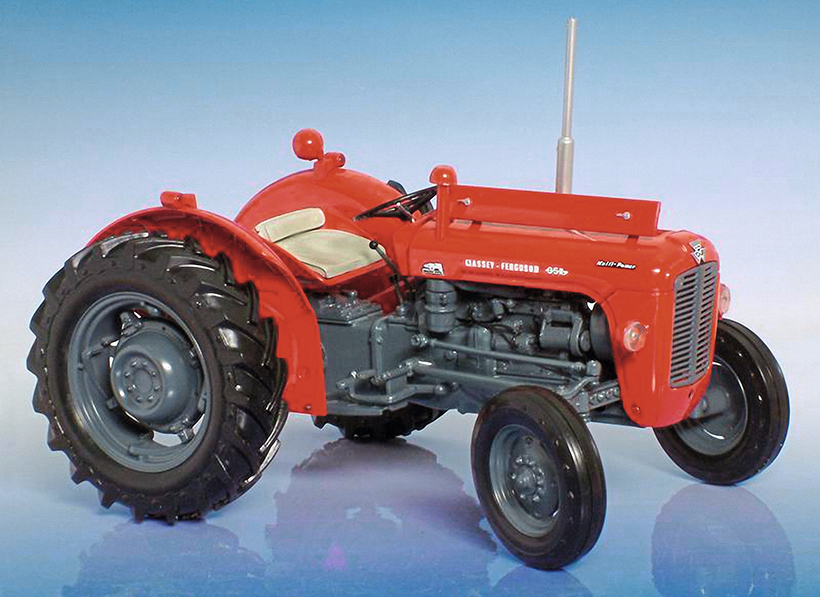 UNIVERSAL HOBBIES
In the big 1/16 scale diecast and plastic tractor range from Universal Hobbies is a red and grey 1963 Massey Ferguson 35X, selling for £70. There is a Massey Ferguson badge on the front of the bonnet and Massey Ferguson 35X and Multi-Power decals along the side of the bonnet. The MF 35X was built from 1962-64, fitted with a 44.5hp 2.5 litre, three-cylinder, four-stroke Perkins A3.152 diesel engine, with the option of a differential lock and Multi-Power transmission, a hydraulic gear splitter. It was manufactured in both England and the USA, as well as under licence in India and Yugoslavia. 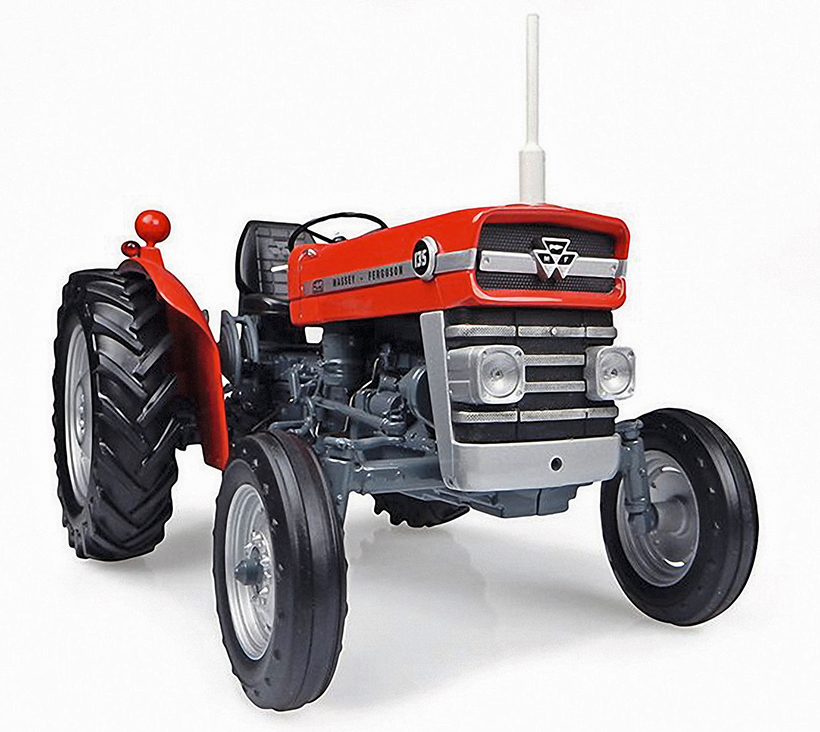 Universal Hobbies have also produced the later Massey Ferguson 135 of 1965 in the same scale, retailing at £72. The 135 was introduced in 1964 and built until 1975. Most had a Perkins 2.5-litre, three-cylinder AD3.152 diesel engine, at least in the UK, but petrol engines were also available, mostly for export. Early examples had two-tone wheels in silver with red centres, but from late 1965 they were all silver, as on the model. Initially, traditional shell-type mudguards were fitted, later replaced by a more angular flat-top design. Over 413,000 were built in the UK. 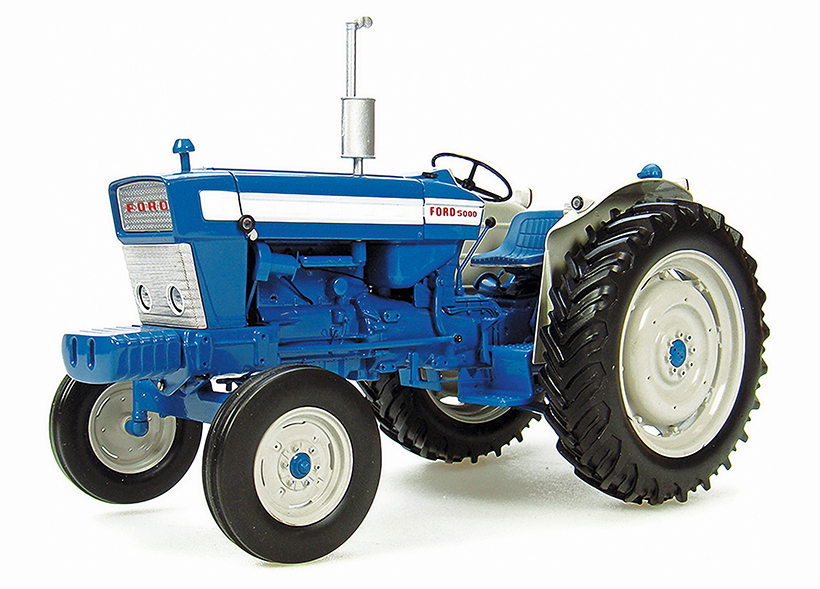 BRITAINS
From Britains in 1/32 scale is a diecast and plastic JCB Midi Excavator 86C-2 in muddy condition in the ‘Britains At Work’ collection, selling for £27.99. The model has a rotating cab, functioning arm with bucket and rubber tracks. You can also buy it in clean condition, if you prefer. 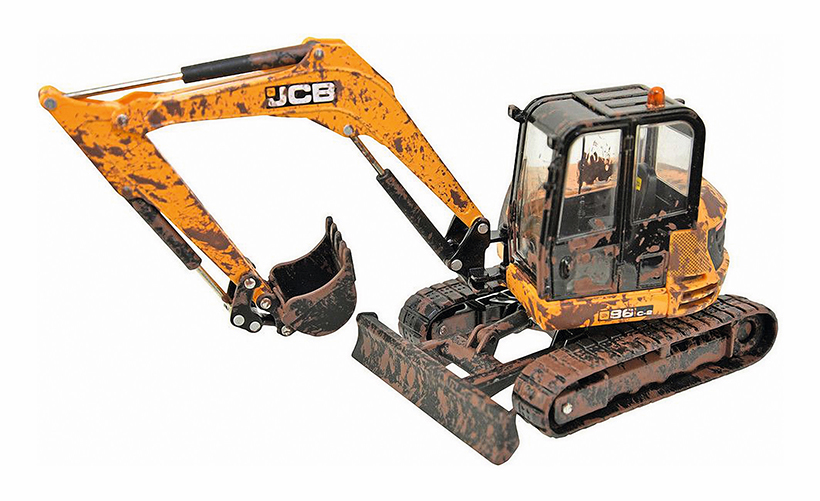 Another new release is the Ford TW-20 tractor, also in 1/32 scale, retailing at £25.99. The TW20 was produced from 1979-83 and had a distinctive sloping grille. It was available as a 2WD or optional 4WD and fitted with a Ford 6.6-litre six-cylinder diesel engine. 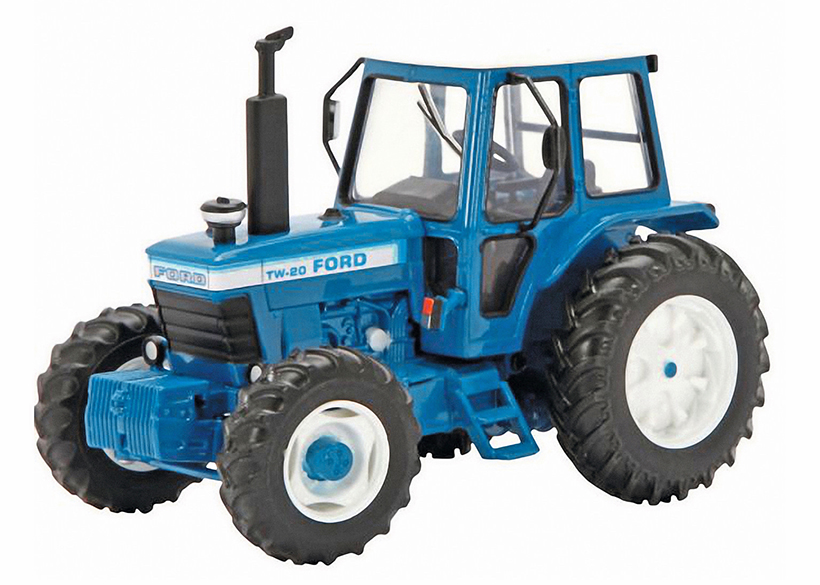 Note the distinctive rearward-sloping grille on the Ford TW-20 Tractor by Britains in 1/32 scale.

HACHETTE/IXO TRACTOR SERIES
A former magazine partwork model German tractor, made by Ixo and originally issued by Hachette, is a 1956 Fendt Dieselross F15 H6 in 1/43 scale, which is now available in UK shops. It comes in green with red wheels and yellow lettering. The recommended price is £19.99. Fendt introduced their first small 6hp Dieselross tractor in 1930. The F15 version was produced from 1950-57 with a 15hp 1.2 litre diesel engine. Over 14,000 were built. This feature comes from the latest issue of Old Glory magazine, and you can get a money-saving subscription to this magazine simply by clicking HERE 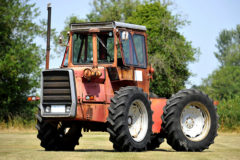 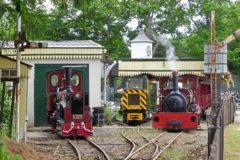 Hollycombe Steam in the Country reopens