Bob Moorman charts the eventful working life of Fowler 6nhp traction engine No.9691 in Australia, and reports on its new UK home. 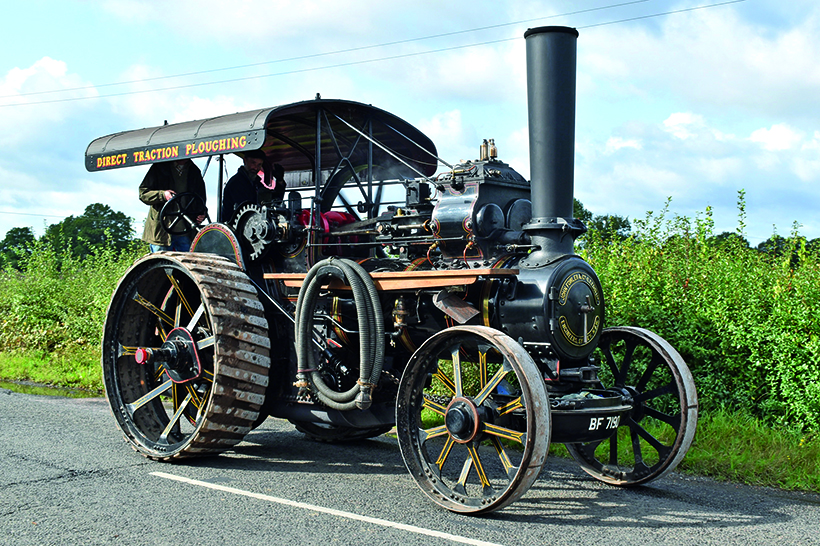 Simon Nuthall, from Cirencester, bought Fowler 6nhp traction engine No.9691 early in 2020, but didn’t take delivery of the much-travelled machine until August, when its new garage had been built. The engine was delivered and driven into its new shed by the previous owners, Melanie and Simon Fisher and Roger Luck, who’d owned it since 2004, restoring it over 10 years, and rallying it after that.

Fowler A4 6nhp compound traction engine No. 9691 was built in 1903 for the Australian market, being ordered through Fowler agents Welch Perrin, in Sydney, to be used in direct ploughing scrub clearance. The engine was built with extra-wide rear wheels (20in), a large firebox and a drop-down tender to facilitate burning wood. 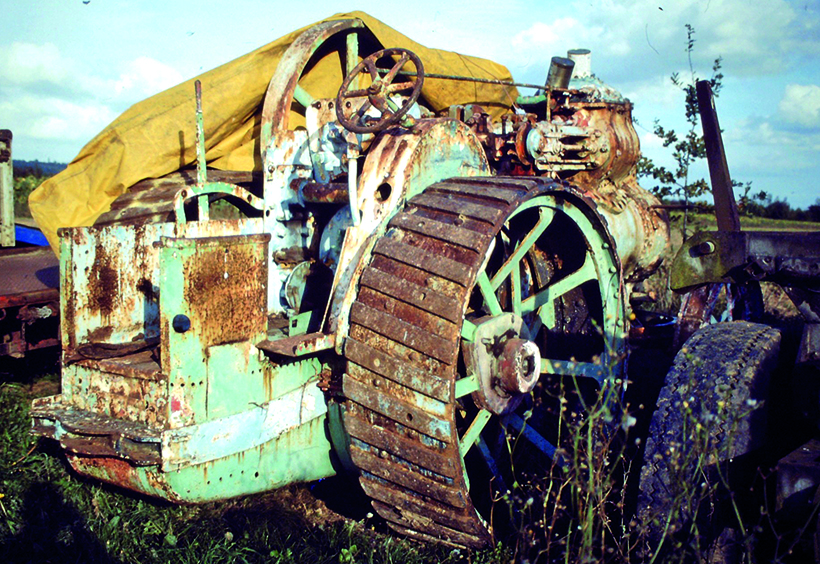 The Fowler as first delivered to Hadlow, in October 2004, showing the interesting paint finish and tender design.

Mining work
During the 1920s, the engine went to work in the mining area of Watsons Creek on the Rocky River in New South Wales, between Sydney and Brisbane. Initially, it worked on gold mining, but was then moved to a tin mine, where it was used to drive a water pump on ‘dredge’ mining, as they call it. The mine was owned by the Cleghorn brothers, who worked the Fowler for 23 years up until 1952, firing the engine on wood and rarely moving it.

After standing around unused for 17 years, the Fowler was transferred to Sydney Ryde Hospital, mounted on a plinth and given a multi-colour coat of paint. In 2004, it was sold-off and returned to England, complete with all the correct paperwork, where it was sold to Roger Luck and Simon & Melanie Fisher, from Hadlow, in Kent. 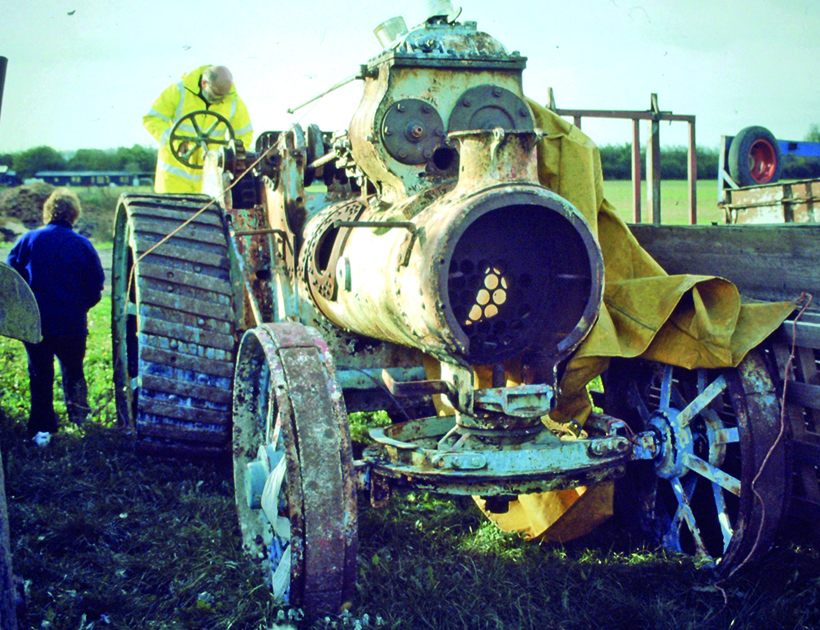 Simon Fisher, in the yellow jacket, inspecting his purchase; looks like a fair amount of work is required!

Restoration began in 2004, by stripping it down to assess the work required. The engine was fairly complete, with good gears and wheels, but the motion was quite worn due to the many years it spent driving a water pump. The boiler, on the other hand, was in poor condition, requiring nearly total renewal. The engine was to be worked on at Goblands, the Pierce family farm at Hadlow, Kent, where various Fowler engines have been restored over the years.

It was decided to send the boiler to Mendip Steam, who were to do the bulk of the work, leaving the fitting of the firebox to the crew at Goblands. It was established early on that the palm stays in the boiler would need renewing. These are fitted to most Fowler boilers, and have forged ends which are riveted to the outer shell of the boiler, three going to the front tube plate, and three to the backhead. They’re seldom in need of renewing, so the challenge was to find somebody to make them, as the boiler inspector insisted on them being forged as per original. Eventually, a firm in Sheffield was found that was prepared to do the job. 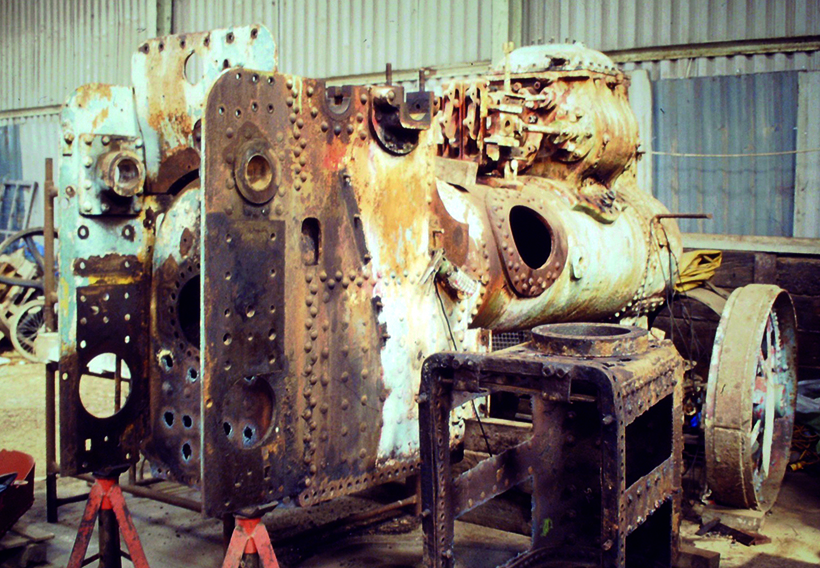 Engine dismantling well under way in April 2005. The firebox is on the right, having been drilled and cut out. The ring on the top is the firehole door ring.

Specialist machining
While the boiler was under construction, the compound cylinder block was sent away to Steve Barraclough for machining of the bores, valve faces, and to supply new valves. Fowlers favoured overhead inclined valves aren’t easy to machine, so it’s a specialist job. The other problem with this type of valve is valve timing, as they’re under the safety valve dome, so you can’t take the cover off when in steam, unlike with other makes which use side valves.

The new boiler was returned in 2010, and fitting the firebox was finished in early 2011, with a trial steaming in July 2011. Attention was then turned to making a new tender, plus all the other jobs. All patterns required were made by Peter Luck, Roger Luck’s late father. The tender was made with the drop-down section as per original; luckily another repatriated Fowler was found with this feature, so details could be copied. 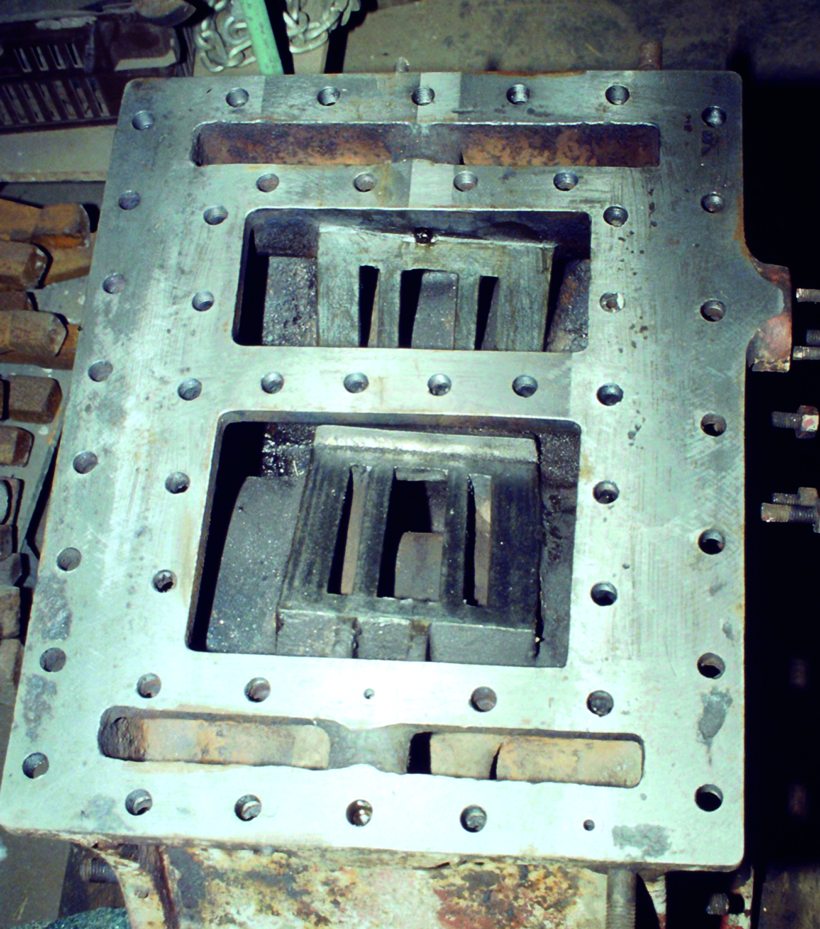 The cylinder block, looking at the top with the studs removed, showing the inclined valves.

Also, in 2011, a Mitchell, six-furrow stump jump plough was bought, similar to the one used with the engine when new. This is a bit different to ploughs used in this country, and is intended to work on ground that’s being cleared of small, shallow-rooted bushes and trees. The above-ground material is cleared first, in the conventional way, then the plough is used to turn the soil and dig up the roots. It’s designed to lift out of the ground when it comes across a large root; each plough section is hinged, so it can move up and down while the adjacent ploughs stay in the ground. Also, it’s connected to a whipple-tree, so the adjacent plough helps it.

There are also levers all over the plough frame for an operator to control the depth and other adjustments. The whole device is attached to the engine via the drawbar, and a special, extended wheel hub on the off side rear wheel, which all had to be made. 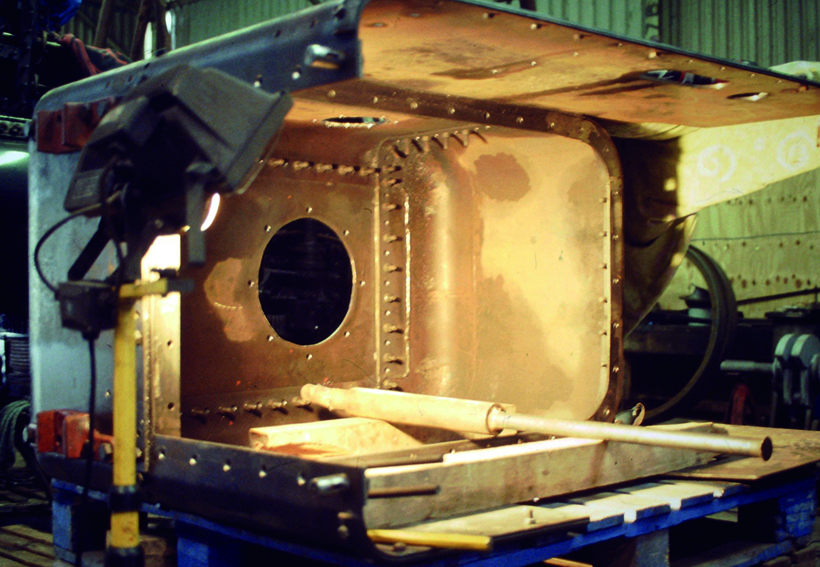 April 2009 sees the new tender under construction, here looking inside it before the floor is riveted in.

First steaming
Most of the motion work is the original, having been refurbished. Work progressed well, allowing the engine to be steamed for the first time in November, 2014, when it was driven around the yard. Over the following winter, a canopy was constructed using some original Fowler canopy supports supplied by Michael Davis. Melanie undertook the sign-writing, after some expert tuition, and applied the lining.

In April, 2015, the Fowler was driven on the road for the first time following its 10-year restoration. It was reasoned that it was probably the first time it had ever been fired on coal and driven on a tarmac road. The rivet heads were still protruding on the original strakes; something that doesn’t make for a comfortable ride! 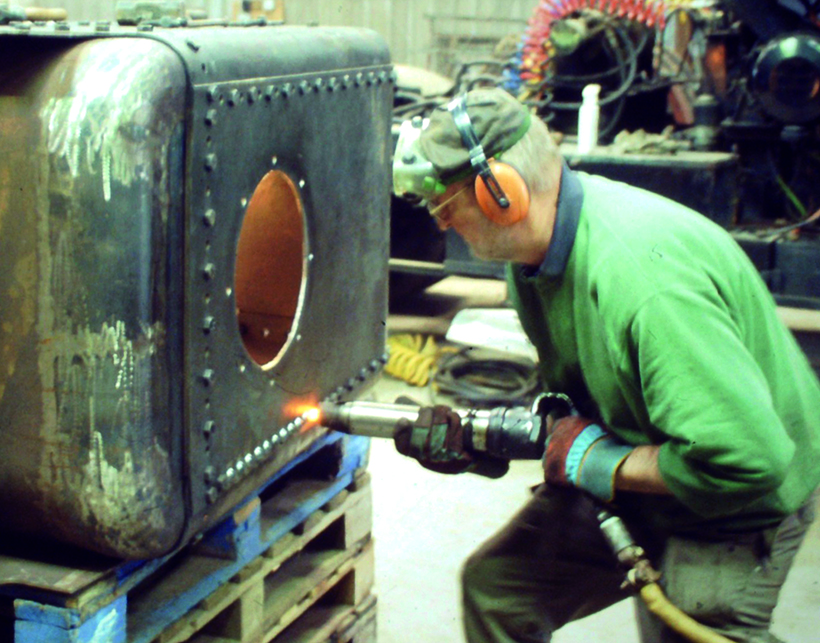 Simon in action, riveting the bottom of the tender.

Since its inaugural run, the engine has been rallied extensively, and has undertaken some direct ploughing using the Mitchell plough. Melanie has also managed to teach some young steam enthusiasts how to drive and look after the engine, for which we’re very grateful. The engine is quite quiet when driving around a field, which is unusual for a Fowler, due to the excellent condition of the original gears.

The new owner, Simon Nuthall, should have years of pleasure with it, and is planning to fit rubber tyres to the wheels before he drives it around in the local area. 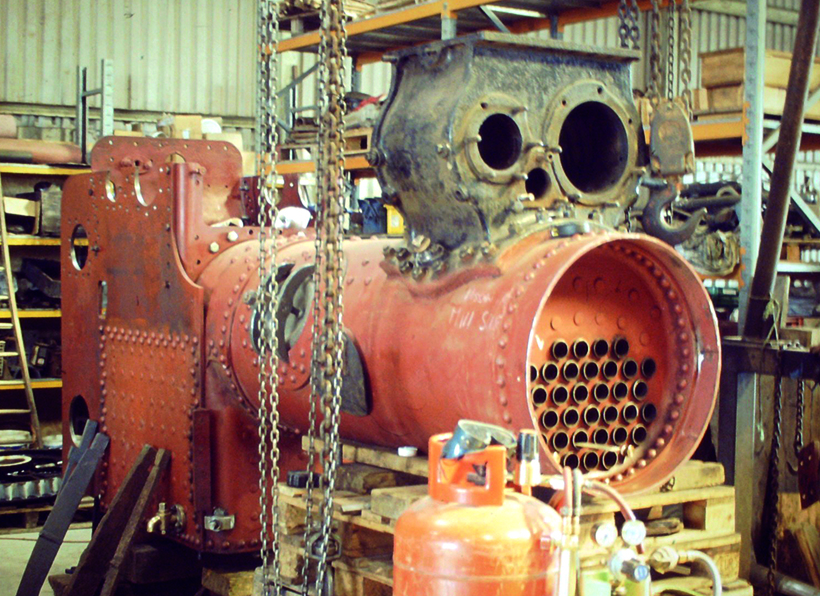 Here’s the new boiler in April 2011, having had the firebox and tubes fitted by the crew at Goblands. 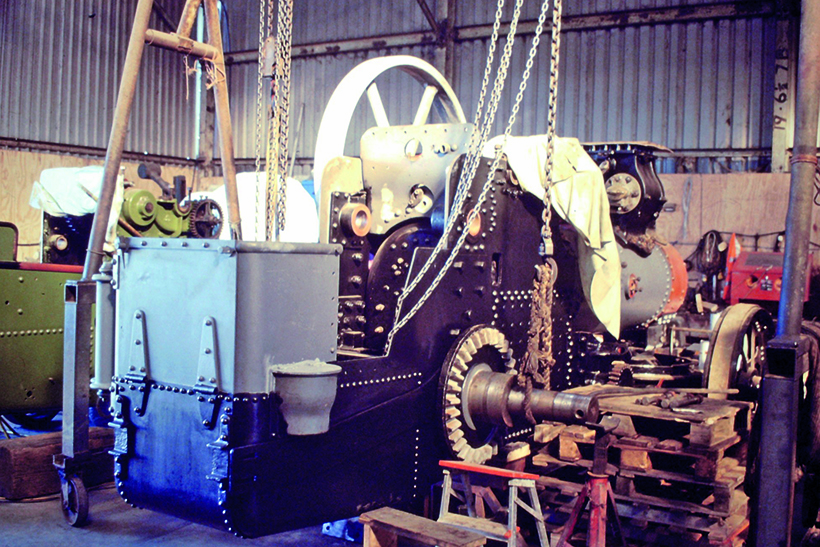 Seen here in October, 2012, the engine is taking shape, with the tender and back axle fitted, showing the new, hinged section at the back of the tender. 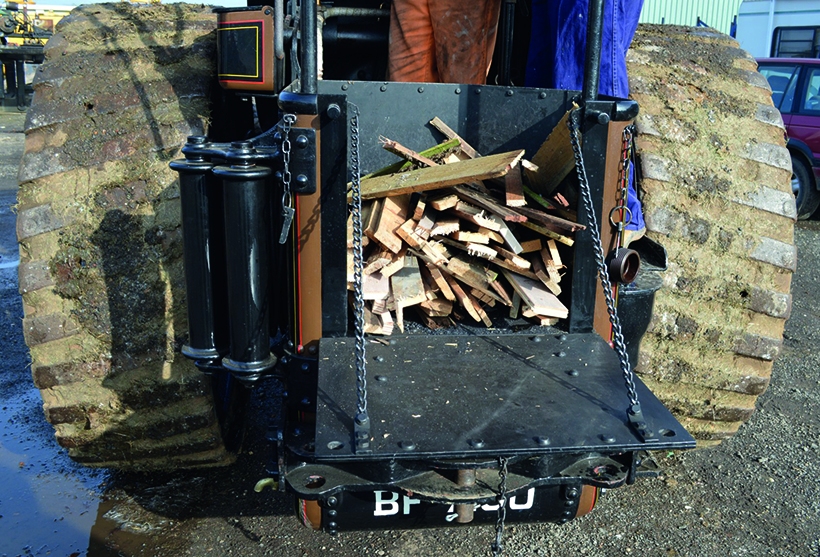 Wood-burning in action in October 2015, although using smaller pieces than would have been the case during the engine’s working days. 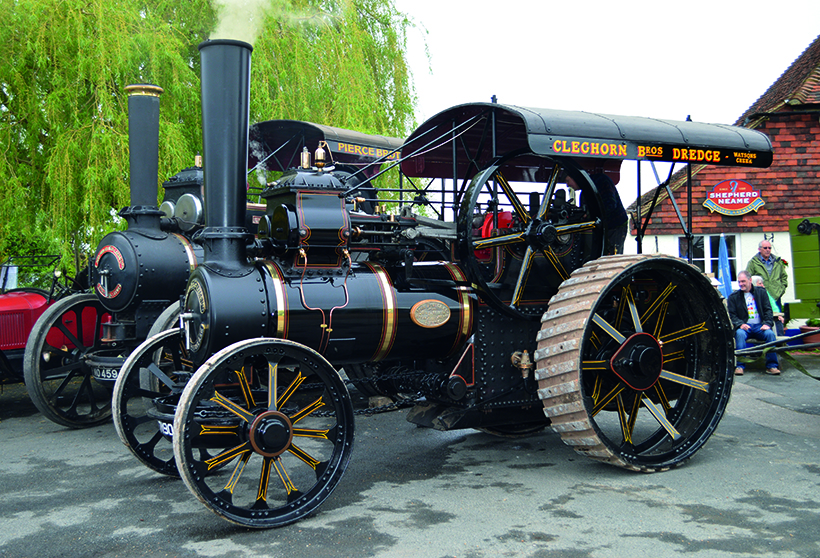 Here’s the Fowler on April 26th, 2015, during its first outing on the public roads at East Peckham, Kent. 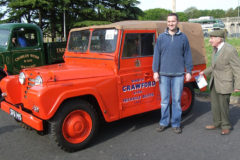 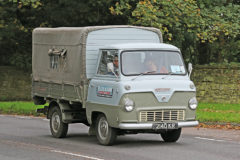