Eric Brain relays the story of what’s known about the history of an interesting Amanco stationary engine that’s now for sale. 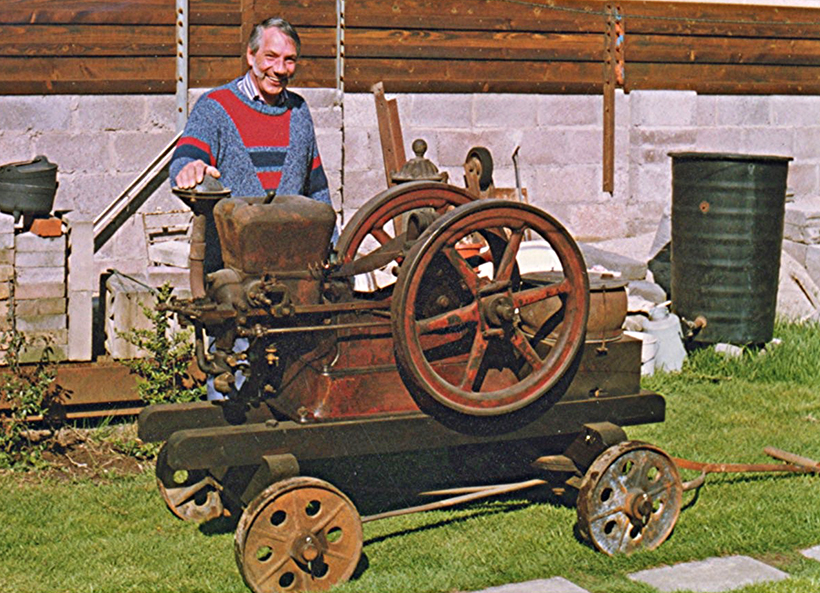 Amanco stationary engine: The late Bill Coombs trolley-mounted the engine, and got it running for Tom Randall.

Spending many years around old engines has made me realise that engine people value a particular engine or type of engine in many different ways. We all have a variety of differing criteria relating to what adds value to an engine, with factors such as age, rarity or interesting and unusual features all playing their parts.

Engines sold at auction generally realise higher prices than machines that are sold privately, especially when there’s an element of competition between bidders involved. But the big question, of course, is whether or not this leads the lots being sold for inflated prices? 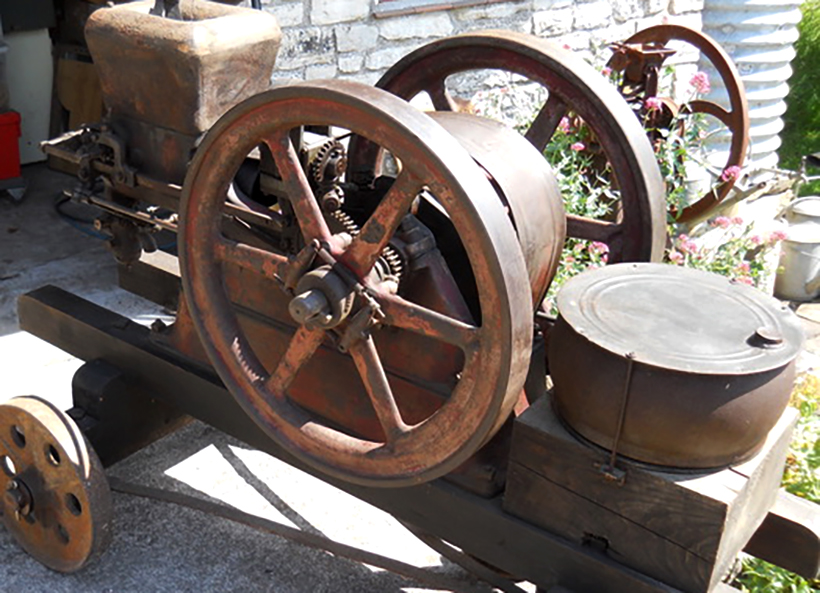 To me, some of the aspects which really make an engine desirable include whether it has a known history, and how well and accurately that information has been recorded. Then, if those details are well presented and made available with the engine at the sale, then so much the better.

With regard to the latter point, a fine example is the 4hp Amanco which enthusiast Tom Randall, has reluctantly decided to put on the market. The earliest part of this engine’s known history concerns the fact that it was owned during the 1930s by the Somerset firm, Purnell & Sons; well-known for printing the Daily Express’ Giles Cartoon Annuals, among other things.

Having been founded and based at Paulton, near Bristol, Purnell & Sons expanded into what became The British Printing Corporation. This was the company that was subsequently financially ‘ransacked’ by Robert Maxwell, under his ownership. Sadly, the former works site has now become the inevitable housing estate. 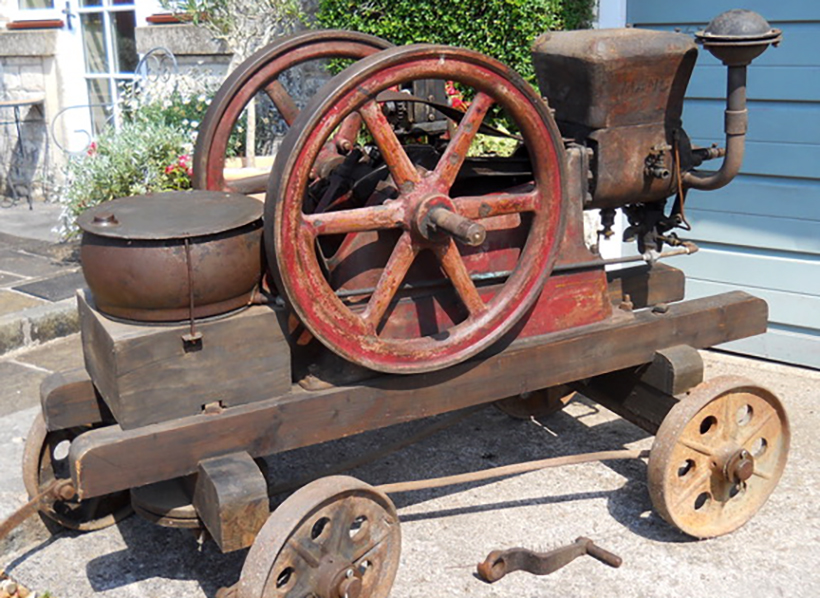 The Amanco dragged out into the sunlight for the first time in many years; note the original tank and starting handle.

Tom tells us: “I bought the engine from an ex-Purnell’s employee who lived at the nearby village of Holcombe. He told me that he’d got the engine from Purnells sometime after the war, but had no idea what its purpose had been with the company. I came across the carnival photo back in the 1970s when helping local author Chris Howell with his books and, having made the connection, spoke to other ex-Purnell’s employees.

One of these – a woman who’d worked as a proof-reader in the 1930s – said her workplace looked out over a yard where the carnival float had been assembled in 1936, and that she recalled watching the men put the machinery on the lorry. At that time the Midsomer Norton carnival was on a Saturday afternoon in June. She worked on Saturday morning as part of her full week in those days. She later went to the carnival and remembered that it rained!” 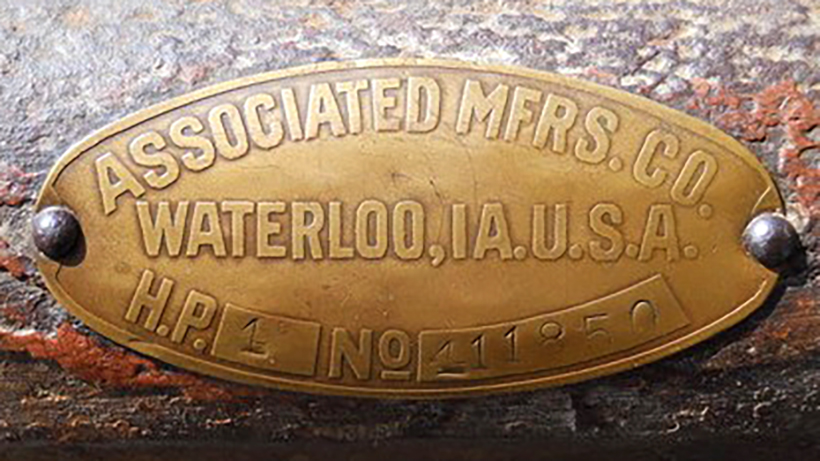 The serial plate of the Amanco 4-Mule Team.

Having acquired the Amanco, it was then mounted for portability on a trolley that had been found on a farm in Mendip, by the late Bill Coombs, who got it running in his back garden. Ever since Tom got it home, it’s remained at the back of his workshop, unused, unrallied and never seeing the light of day.

Tom also tells me: “From what I can work out, the date is probably just post-1916; the engine number is 411850 and it has the 1916 goose-neck striker, although that’s not coded ‘G340’, but ‘GDD’ – a reference for which I can’t find any trace. It has an oval, brass plate on the hopper front, and the remains of the name ‘AMANCO’ marked in black, upper case lettering on the side of the hopper. I have photographed most of the detail of the original paint. 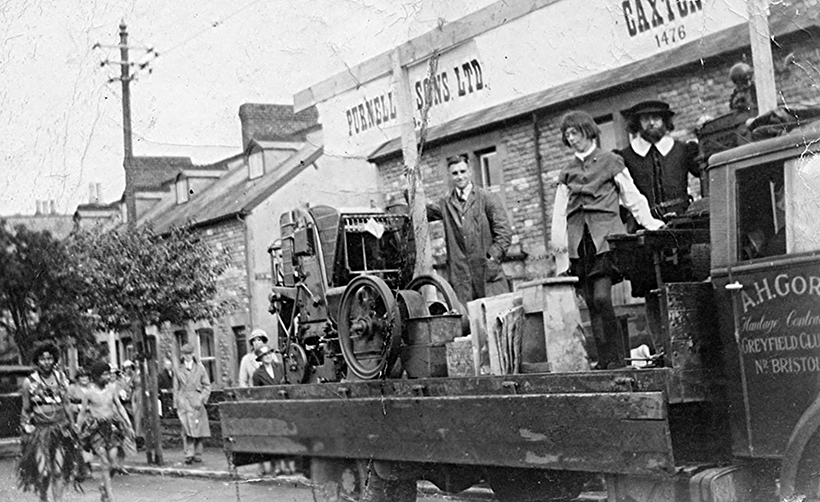 The Amanco in the carnival procession around Midsomer Norton, demonstrating the ‘modern’ 1930s printing methods against those early efforts of Caxton. (This photograph had been torn in half when found)

“The only thing holding me back from parting with it has been its local, tenuous connections. But I’m not sure they are strong enough for me to hang on to it so, reluctantly, I have to offer it for sale”.

If anyone is interested in adding this excellent Amanco Four Mule Team with a known history to their collection, please make contact via the editor, or look out for an ad in the Stationary Engine classified section.

This story is from the latest issue of Stationary Engine magazine, and you can take advantage of a money-saving subscription simply by clicking HERE 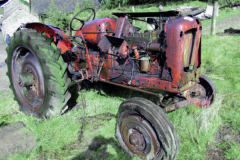 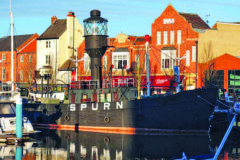