Richard Halton of the Medway Queen Preservation Society brings us a detailed update on this remarkable paddle steamer. 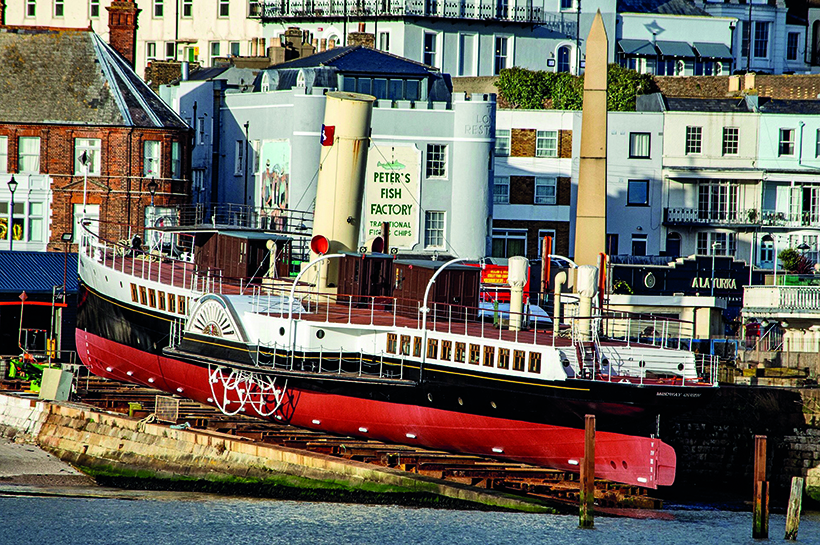 With the work completed, Medway Queen on the slipway in December 2021. (Pic: David Stearne)

PS Medway Queen is no stranger to Ramsgate’s Royal Harbour, although her visits haven’t been very regular. In 1940 she was there quite often during Operation Dynamo; the evacuation of troops from Dunkirk. She landed the rescued men there on six out of her seven trips – landing them at Margate on trip three. She sailed from Dover on trip six but had previously landed the men at Ramsgate and then moved to Dover.

Several of the wartime photos that we have were taken in Ramsgate Harbour by her First Lieutenant, John Graves. How he found the time and energy to take the photographs is a mystery. We have no record of further visits during the war or while she operated as an excursion steamer, but in 2015 she was back, moored at the Commercial Quay and open to visitors for the Dunkirk anniversary event there.

Her most recent visit was more mundane in that it was for the purpose of hull maintenance. The plan had originally been to combine the maintenance work with attendance at the Dunkirk 80th anniversary in 2020, but the pandemic killed that plan. It could have worked well, as a significant part of the cost of the project is the tow and its associated administration and documentation, revenue from a few days at Commercial Quay would have helped to offset that. The Medway Queen Preservation Society then looked at getting at least some of the work done at her berth at Gillingham Pier but that would have had severe limitations and the idea foundered, certainly not helped by the continuing pandemic. 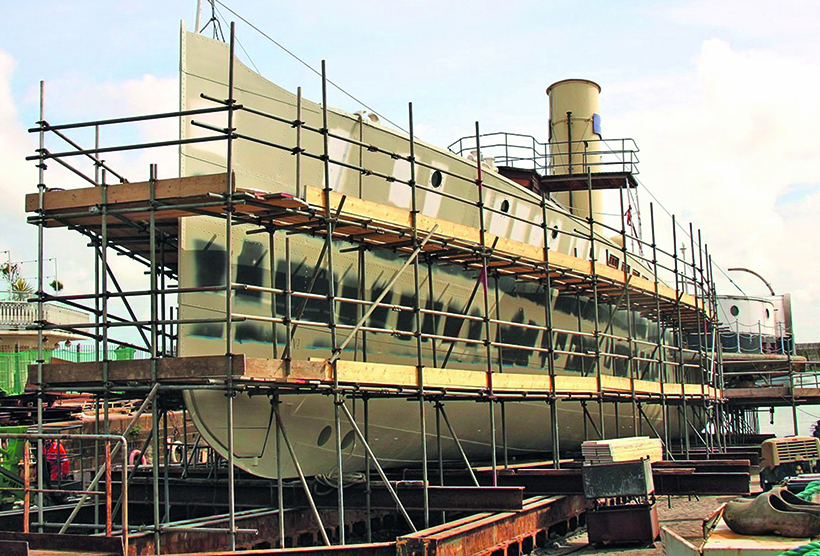 Medway Queen on the slipway at Ramsgate. (Pic: Bob Stokes)

In 2021 with the Covid threat receding (at least in the summer) the plan was rethought and it was decided to make the trip to Ramsgate for the maintenance work which was becoming more urgent. Ships in service, or even moored statically, need regular servicing and repainting and Medway Queen had not had a major repaint since the 2013 rebuild – the bullet had to be bitten! Plan A was to move the ship to Ramsgate in July, possibly take part in the planned 200th anniversary Royal Harbour Festival and get the work done on EAPL’s slipway there: full hull clean and repaint, paddle wheels and undersides of paddle boxes included. Paint a few small compartments where breathing apparatus would be needed while spraying and get the saloon windows re-varnished while the ship was in a safer work environment. It was hoped to invite the public on board while she was there but “health and safety” intervened and it proved impossible.

Needless to say scheduling of the plan was complicated by the need to fit around tug availability, the ship yard’s other workload and stringent tide and weather requirements for the tow. She moved to Ramsgate in July with the hope that she would be back for an autumn visitor season but fate intervened! Her move onto the slipway was delayed by the previous job and an unpredictable failure of the slipway winch. The ship was eventually moved onto the slipway and the yard started work, erecting scaffolding as a working platform and pressure washing the hull. A steel hull relies on electrolytic anodes to reduce corrosion and these were all to be replaced while access was possible. The joint between hull plating and deck was also to be sealed to prevent corrosion. 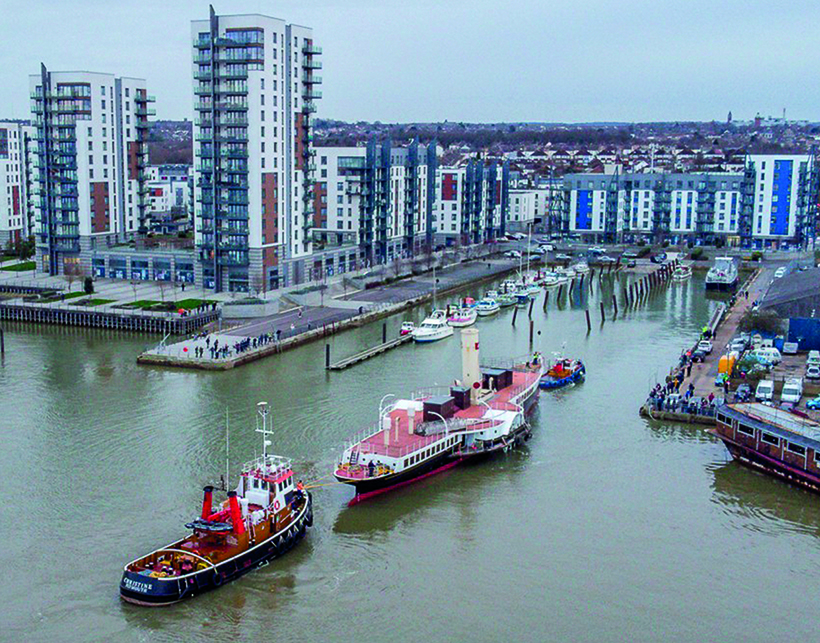 The hull was primed and treated with anti-fouling paint below the waterline. Above the waterline it received an undercoat and top coats of marine standard paint finishing the ship in black and white as before. The Medway Queen name and gold lining were applied when other work had been completed. It had also been decided that the promenade deck railings should be renewed while the vessel was in a safe working environment. The stanchion fixings were getting some of the blame for rust streaks on the hull and some were not as secure as they should be. A number were of a temporary nature, not in keeping with the rest.

Replacement stanchions to the original design were cast by Bridport Foundry and shipped to Ramsgate. In due course they were fitted and a new handrail was created and steam formed to the correct profile – an improvement on what had been there before. The stanchion mountings were changed to be of stainless steel to avoid future rust problems but changing them over required portions of the deck head to be removed for access to the bolts – another job! Flanders & Swann’s “gasman” song comes to mind!

Another analogy might be taking your car in for a long-overdue service and getting regular phone calls from the garage suggesting something else should be done, although a major difference would be the number of zeroes on the back end of the price! The extra work was planned by the society in co-operation with the yard and the result was more work being done but, of course, timescales stretching even further. The starboard paddle box fascia was found to be in poor condition. That was removed and stowed on deck to be returned to Gillingham with the ship. Another refurbishment job to keep our workshop team busy for quite a while. 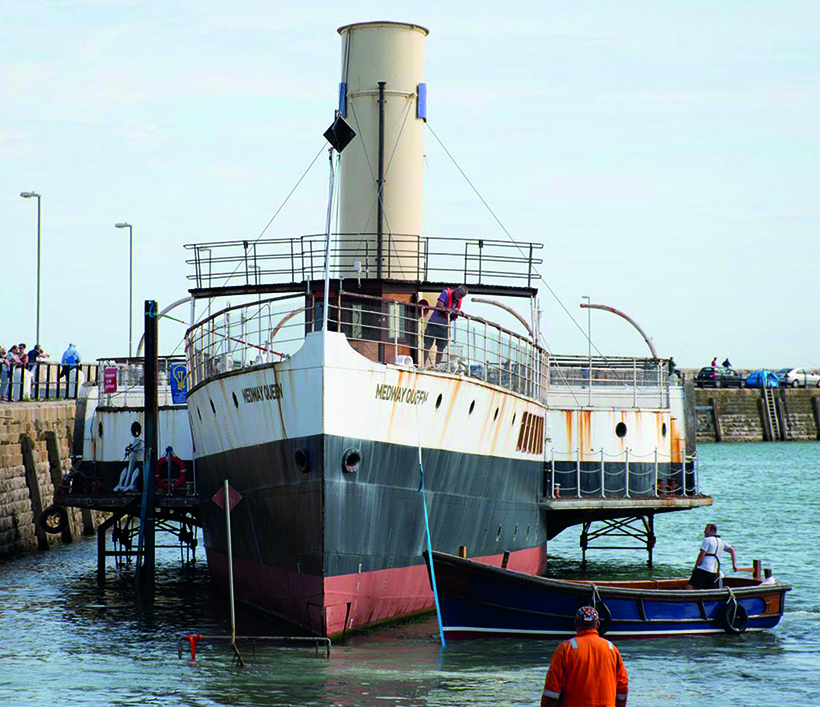 As the autumn wore on the extending timescales began to be seen as a problem. Some could be blamed on extra work, some jobs just took longer than expected and then as the project neared completion we were back in a lottery with the weather and tides for the return trip. It looked as if she could be home for Christmas and maybe, just maybe, we could get a few visitors on board in December to start recouping the lost revenue. Then the winch failed again – reports suggest that the yard manager was not pleased! A suitable weather window came and went, then the tides were wrong, and getting a calm day at this time of year was starting to look unlikely. It wasn’t until early January that the winch was coaxed back into life and all conditions were suitable for the tow.

The tug Christine and her accomplice Nipashore made a dash for Ramsgate and brought Medway Queen home. She moored once again at Gillingham Pier on 7 January looking really smart in her new coats of paint. The priority now was to reconnect the visitor gangway and all shore services in time for a Members’ Preview on 22 January. Regular openings to the public on Saturdays start from 12 February and there will be four days of opening for the Platinum Jubilee celebrations in June – details to be announced.

Between the pandemic with its lockdowns and the Ramsgate project the Medway Queen has lost almost two years of visitor income. That doesn’t just mean the direct income from sales and tour tickets but also the knock-on effect on public awareness and subsequent reduction in support and donations. A publishing project recounting Medway Queen’s exploits at Dunkirk (HMS Medway Queen – Memories of Dunkirk) had been timed to launch at the 2020 anniversary event – that was missed of course, but the book has sold well anyway.

Back in the dark days of May 1940, HMS Medway Queen is seen at Ramsgate. (Pic: PSPS Collection)

The online and mail order sales campaigns were ramped up and over the summer the Saturday Team, who would normally show visitors around the ship, manned an information stall by the dockyard gate; signing up new members, flogging books and accepting donations – all to reduce the impact of lost revenue. The Medway Queen Preservation Society would welcome any further donations or grants to help make up this shortfall and enable restoration to continue.

Medway Queen is now open to visitors at Gillingham Pier on Saturdays. Normal opening times are 11am to 4pm with last admissions at 3pm. There is always the chance that some unexpected circumstance beyond the control of the preservation society will interrupt this arrangement, so if you are travelling a distance to visit check the website, email info@medwayqueen.co.uk or phone 01634 575717 beforehand.

Besides the ship’s magnificent new paint job there have been few opportunities to inspect the work done by our volunteers in the upper aft saloon. That is certainly not to be missed when you visit. www.medwayqueen.co.uk contains a huge amount of historical data about the ship as well as news and details of the society. The MQPS is always keen to recruit new members and volunteers – in both technical and administrative roles. We hope to see you at Gillingham Pier very soon.

This article is taken from the latest issue of Old Glory magazine. For a money-saving subscription, simply click HERE 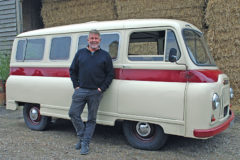 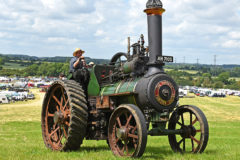