Phil Braithwaite, having spent time working in South Africa, recalls a fascinating Aveling roller that he came across in the country. 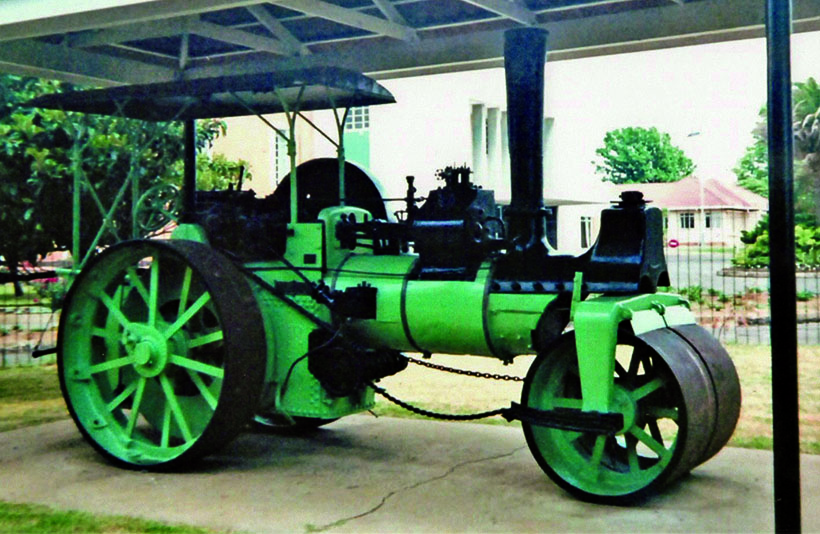 Fascinating Aveling roller: The apparently very old Aveling roller on display at Volkrust, South Africa. Information gleaned locally identifies the boiler number as No. 4253 and a working pressure of 140psi.

This fascinating Aveling roller is located at Volksrust in Mpumalanga province, near the KwaZulu-Natal provincial border, some 150 miles south-east of Johannesburg. Information which Phil gleaned about No. 1784 indicated that it’s a very old machine dating from 1882. However, another Aveling number – No. 4253 – was also provided on the adjacent display board.

In looks, the front of the roller, with the scrapers pivoted off the front forks and the shortened chain sweeps, are definitely from an early design of roller. However, the plates of the outer firebox have pressed corners, which were only manufactured like this after hydraulic presses were introduced in the works at Strood during the mid-1890s, and these are most certainly not from the earlier decade. 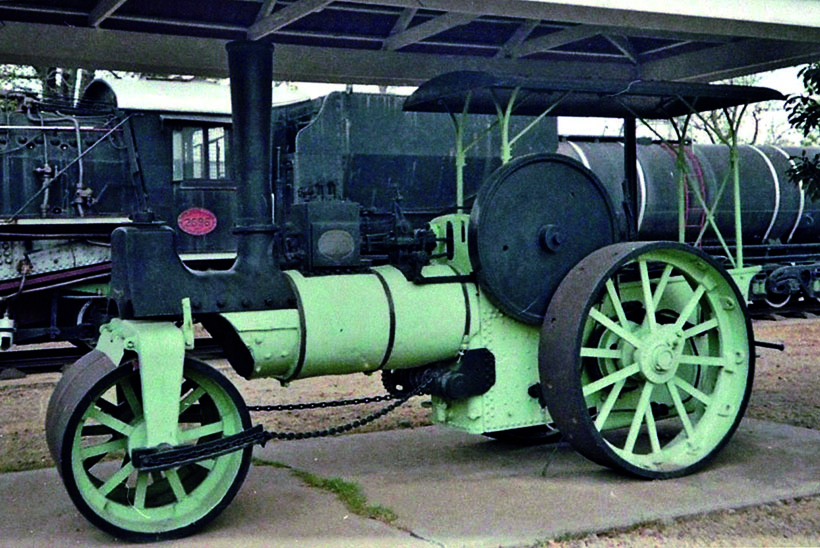 The Aveling & Porter roller, with preserved SAR 4-8-2 19D locomotive No. 2696 behind it, seems to be a contender for one of the first 10 rollers in existence in the world, but this is not the case…

In the ‘Orange Book’ – the publication A Hundred Years of Road Rollers, published by Aveling-Barford in 1965 – there’s a photograph of this roller at Volksrust, taken especially for that publication. There’s also a lovely colour image, taken outside Denton Manor (near Grantham), which shows Aveling No. 1760 of 1882, the oldest steam roller in Great Britain. This was also taken especially for the book.

Information gleaned from the Lincolnshire archives revealed that Aveling No. 1784 was sent to Pietermaritzburg Corporation on August 28th, 1882, ‘for E Willshire, town clerk.’ It was a ‘standard’, 5hp, 10-ton roller of the time, and its roll sizes were: rear, 5ft diameter, 16½in wide and 3in thick; front, 3ft 6in diameter, 1ft 10in wide and 2¾in thick. It was also fitted with ‘steel scraper plates complete’, both front and back. Its working pressure was 110psi. 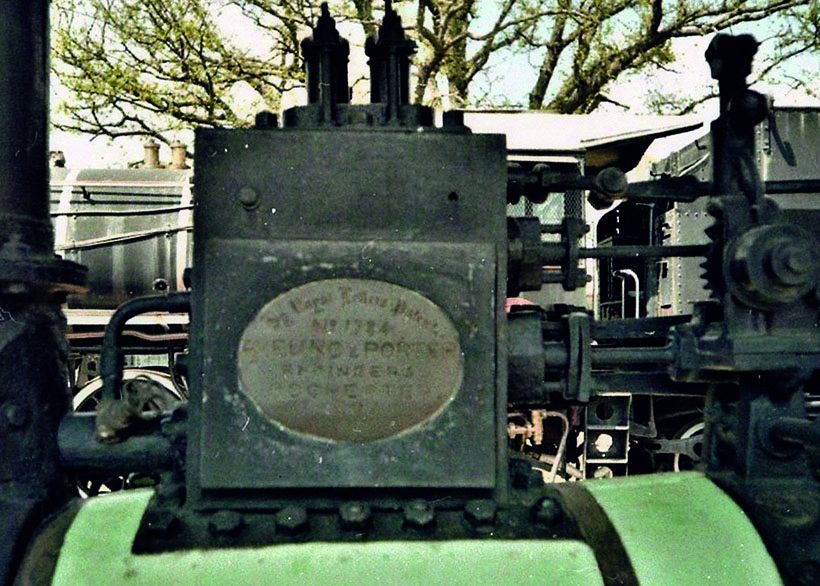 … despite the ‘1784’ appearing on its Royalty Plate. (Pics: Phil Braithwaite)

On the other hand, as was expected, No. 4253 was supplied in a later decade, on January 3ed, 1899, to FA Robinson & Co. It was a ‘standard’, 5hp, 10-ton roller of the era, and was provided with an owner’s plate stating ‘Howard Farrar & Co, Engineers Agents, Johannesburg’. There was also an Aveling plate giving its Royalty Number, plus its working pressure of 125psi. Its roll sizes were: rear, 5ft 6in diameter,16in wide and 3in thick; front, 4ft 0in diameter, 2ft 0in wide and 2¼in thick, with spring scrapers to the rear rolls. And it was supplied with an awning. Thus, it was an altogether different design of roller, albeit with similar looks.

A double check on the roller with the Boiler Test Number of 4253 revealed that it was a 6hp compound roller No. 5348, dispatched on September 9th, 1903, to Tyrone County Council in Northern Ireland. This rules out any South African connection for this machine. 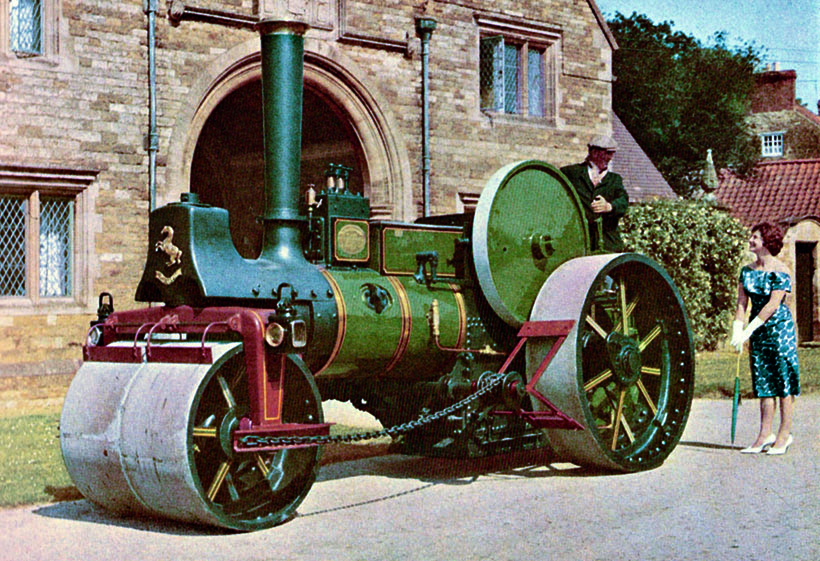 This lovely colour photograph of Aveling No. 1760, the oldest steam roller in Great Britain, which was owned by Aveling-Barford at that time, was taken outside Denton Manor, very close to Grantham. (Pic: Aveling-Barford)

It appears, therefore, that what’s now at Volksrust is an amalgamation of the two, aforementioned numbered rollers, with only the front-end and Royalty Plate being from No 1784; the rest of the machine having been constructed some 17 years later. It’s also possible that the valve chest cover plate of the earlier roller was transferred between the two of them, when the ‘amalgamation’ took place.

Nevertheless, the roller’s remains are of interest, but they can’t be construed as being a very old roller in the overall scheme of things, and it’s therefore not really comparable with No. 1760. The oldest known steam roller in the world is Aveling No. 1457, dating from 1878, which is to be found in the Tekniska Museum in Oslo, Norway. 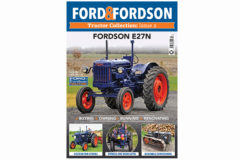 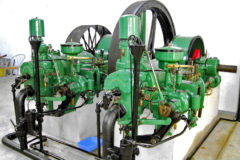