Bill Barton completed the superb restoration of his 1951 Albion Chieftain FT37N during lockdown. David Reed went along to find out more. 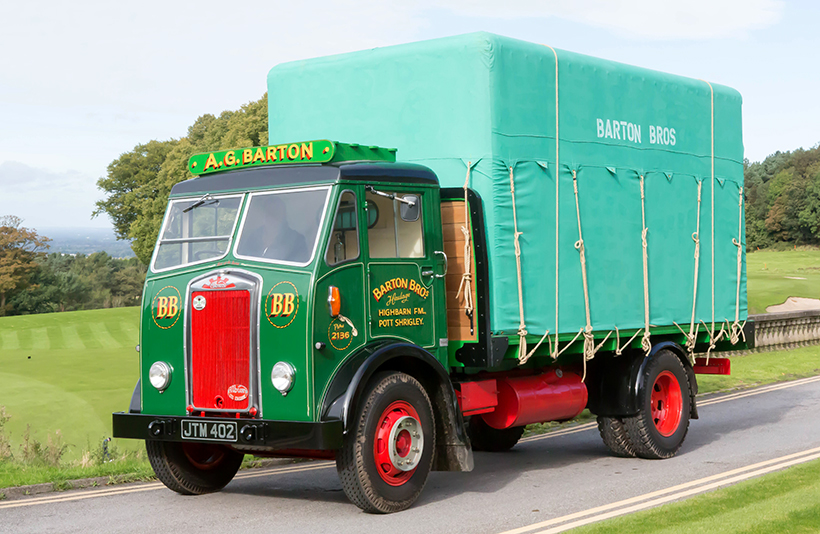 On very slight positive of the 2020 and 2021 Covid lockdowns was that they gave many owners an opportunity to get their restoration projects completed. One such is Anthony Barton – known universally as Bill – whose 1951 Albion Chieftain FT37N made its post-restoration debut at the Cromford Steam Rally back in July, and certainly got a lot of attention.

Bill’s Albion’s, registration number JTM 402 and chassis number 73053D was new on May 16 1951 to London Brick, and ran out of the firm’s famous Stewartby works in the Marston Vale, just south of Bedford. The Albion was with the London Brick Company until 1964 when it was bought by Edward Pattinson of Station Garage at Leigh, Stoke-on-Trent. “He ran lorries with his younger son, Barry,” Bill said. “They used to haul for Universal Abrasives.” Edward and Barry also ran a coal business in the area, with the Albion being employed on that side of the business from the start. 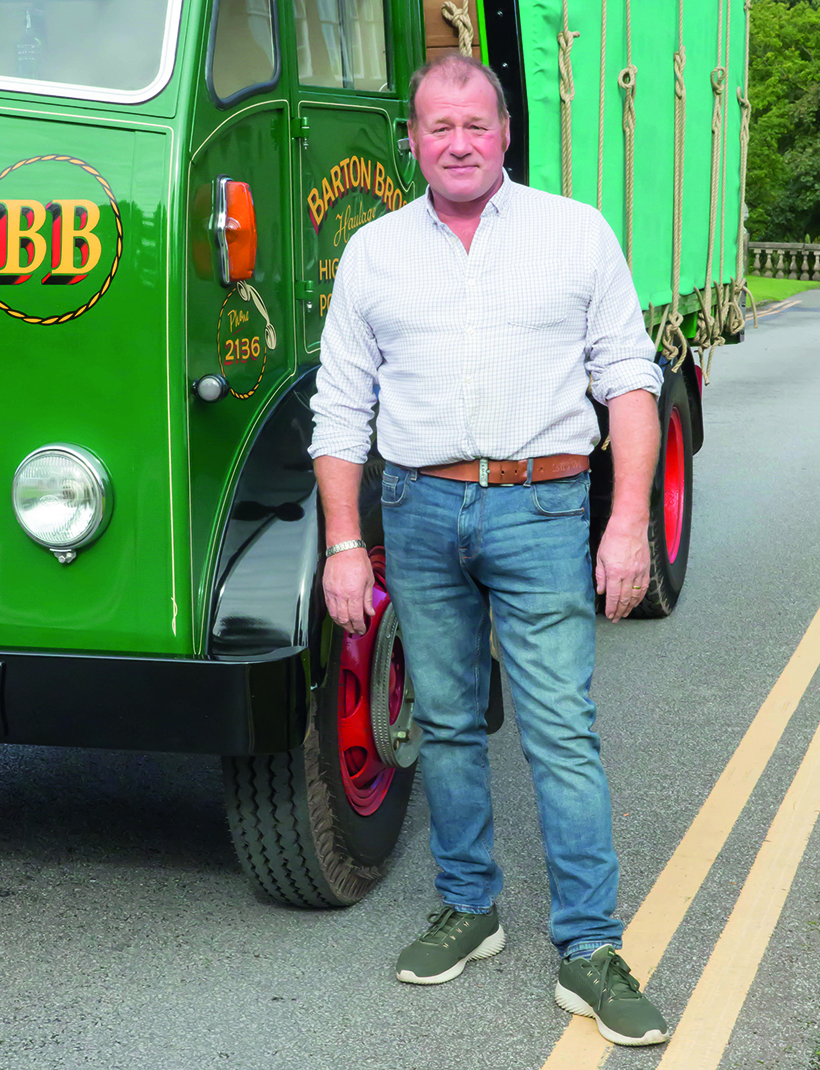 And there it remained until the mid-1970s, although how much time it spent on the road by then is not known. What is for sure though, is that one day it was borrowed by Edward’s older son John who had a farm. “He used it to carry a load of hay,” Bill explained. It is not known whether this was a regular arrangement, but one day things went wrong. “It seems that the Albion’s battery short circuited which resulted in the lorry catching fire.”  Apparently valiant efforts were made to rescue the Albion, with the hay bales being dragged off the vehicle as quickly as possible. “They did the best job they could to put out the fire, but the Albion was severely damaged.” The actual date of the fire is unknown, but there are some clues that indicate when the incident took place, “According to DVLA records the Albion was last taxed in 1976,” Bill added, “So it probably caught fire shortly after that.” 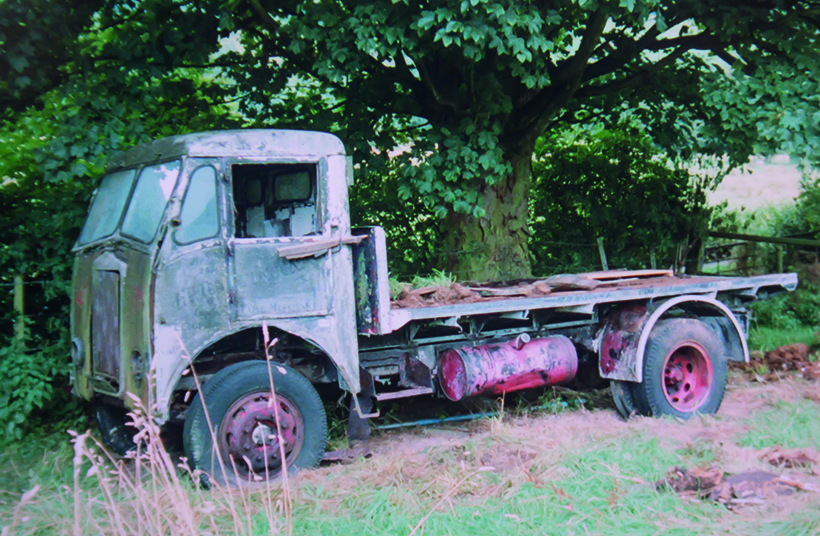 As the Albion spent 23 years ‘resting’ in a hedge prior to being rescued for restoration, just extracting and removing it took three months. It was ‘parked’ next to a public footpath, and had become something of a local landmark.

However, instead of being scrapped, the Albion was left to stand next to a hedge for the next 23 years. In retrospect though, the fire arguably helped the Chieftain to survive. If it had continued to work, the likelihood is that the vehicle would have eventually ended its days in a scrapyard waiting for the cutter’s torch, like most of its contemporaries.

Over the years, the Albion became something of a local landmark. “There was a public footpath running nearby, so everybody knew that it was there.” Bill himself had known about the Albion for many years, “A lot of people had tried to buy the Albion, but the owner didn’t want to sell it.” 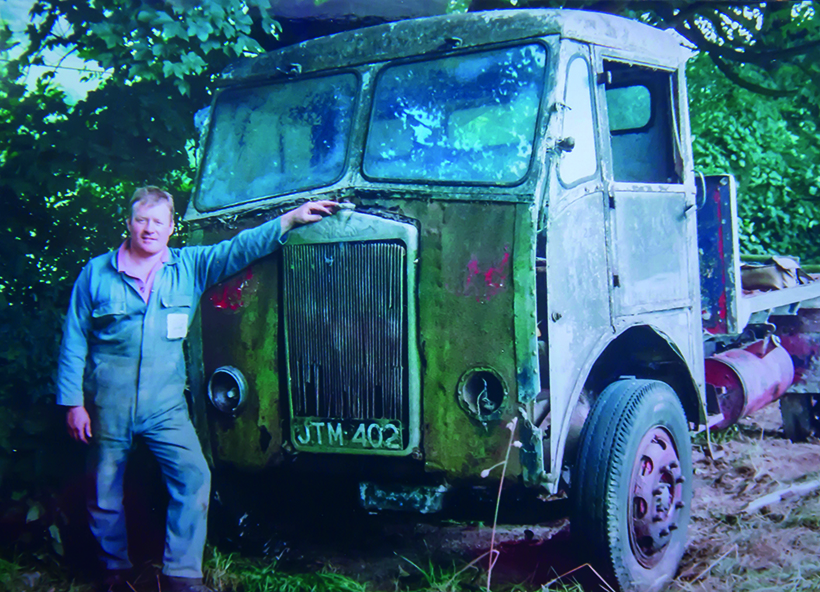 But Bill was determined to buy the Chieftain. “In 1998, I decided that it was the lorry for me, and I approached the owner.” There was, though, a particular reason why Bill was keen to acquire the Albion. “My uncle Roy was one of the last people to drive the lorry, so I thought that it would be a good project to do up as it had a family connection.”

Big extraction
Whether it was this or some other factor that persuaded the owner isn’t clear, but when asked by Bill the owner had a change of heart, and a deal was done. Moving the Albion turned out to be a major problem though. “The rear wheels were seized up as the brakes had been left on,” Bill said, “It took me three months to move it anywhere. I nearly gave up on the project but eventually freed them using a lot of heat and hammering.” The Chieftain was then towed out of the field with a David Brown 995 tractor. 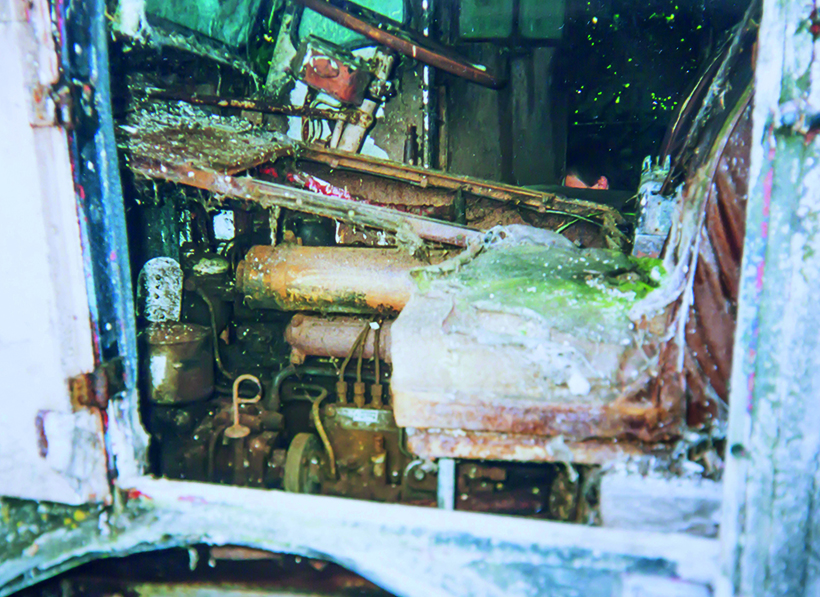 Cab interior was a bit of a mess to put it mildly, but the engine turned out to need surprisingly little work.

The move was still not straightforward though. “The cab was in such bad condition that we had to wrap it up with plastic film so that it didn’t fall to bits,” Bill added.

The Albion was towed to BC Transport at Bollington to be washed down, after which it was taken to Park Skip Hire’s property in Endon Quarry at Kerridge near Macclesfield where Bill worked at the time. And there it remained for another seven years. “It was not touched due to my work commitments,” Bill explained, “When I bought it back in 1998, I thought that I would have restored it by the millennium, but a number of other things cropped up and it was left to stand again.

Eventually, the Albion was on the move again, being taken to Bill’s parents farm in 2011 where the restoration actually began. 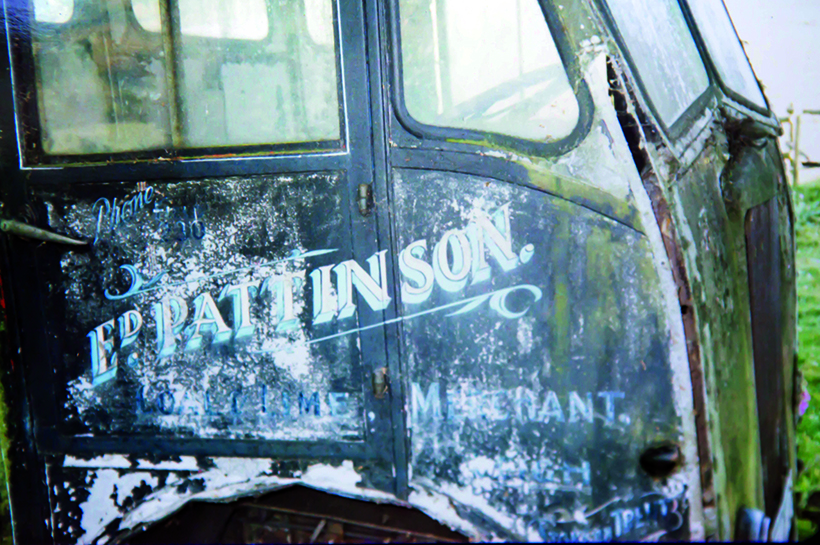 Some period signwriting was still intact on the side of the cab that had been protected by the hedge.

The restoration
The first thing to be looked at was the engine, with one of Bill’s friends, Joe Turner helping with this part of the restoration. “The engine was a non-runner, but there wasn’t that much to do to get it running.” The problem centred around the pistons. “There was no compression, so we fitted new piston rings and Joe honed the bores.” Other work involved replacing the valve guides which were really worn. “I got a friend to machine new ones out of phosphor bronze,” Bill said, “and when we put the engine back together it started straight away.”

There was still some work concerning the radiator to complete. “Some of the radiator cores were missing so I had to source some new ones from Len Isherwood of Bacup.” 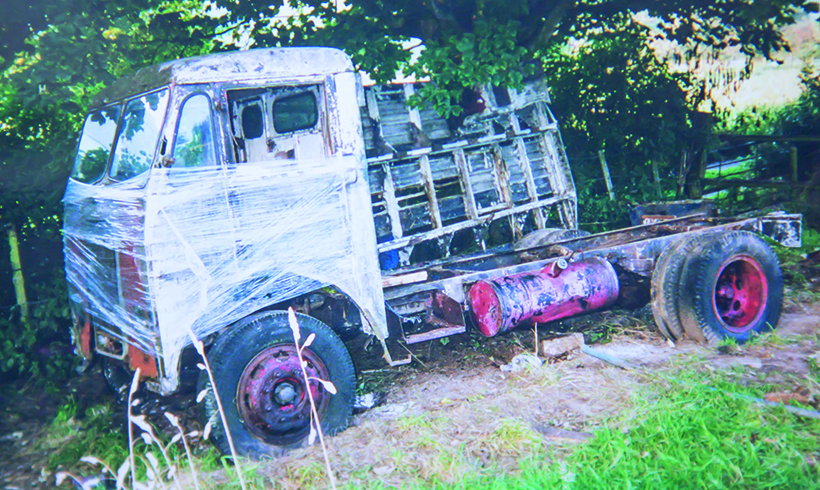 Cab had to be wrapped in plastic to stop it falling apart during the move, but ended up being renewed anyway

Attention then switched to the cab, which was in worse condition than initially expected. “I was trying to stop it from falling apart as it was so rotten,” Bill explained. Despite the cab’s condition though, initially, Bill still intended to restore the cab, but after meeting John Jardine at a show, everything changed.

“I told John about the restoration project and how I was going to fabricate a new cab using some patterns that I had,” Bill said. That conversation tempted John to come and have a look at the Albion for himself. “Three weeks later John rang me up to say that he had found a replacement cab for the Albion. This cab had been bought by Tyson Burridge of Distington from Mick Hayton’s sale in Scotland back in 2006.”

Bill managed to do a deal, and the cab was duly transported to his Cheshire base, “There was still some restoration work to do to it though,” he said. 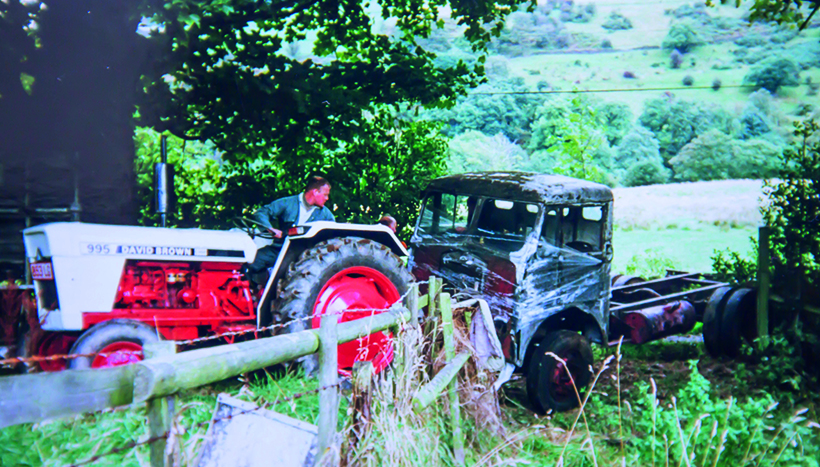 After many weeks spent freeing things off, the lorry was eventually ready to be towed out and away.

“One of the front quarter panels was in poor condition. So John Wood from Bollington made a new one for me, while part of the scuttle was missing so my friend Gary Stewart fabricated a new one.” The doors, however, were okay. “Most of the original glass was intact with the kite marks,” Bill said, “The only glass that was missing was from the rear window, which had to be specially made.”

As would be expected, the new cab needed a new set of lights, which came from David Ashcroft of Nateby. “David also provided some other parts during the restoration,” Bill confirmed. “While the Albion was rewired completely, with a new loom being made by Dave Rowley.” As for the interior of the cab, it was just the usual jobs that were required, including new engine covers being made, while the seats were re-covered.

On arrival, the remains of the Albion were given a very thorough wash-down.

There was some work to do concerning the brakes though. “The servo needed to be completely overhauled,” Bill added. The brake shoes were re-lined.

There were problems, though, when it came to the wheels. “I had to locate new ones after the originals were found to be rotten through standing in the long grass.” Bill said. “They were sourced from different places, with new brake drum dust covers coming from Len Isherwood of Bacup.” The fuel tank is original, but corrosion had caused some pin-holes. “I used some sealer which solved the problem.”

Eventually, the Albion was ready for painting, with Alistair Kershaw doing the honours, with the sign writing being added by Andy Russell of Poynton, “They both did a great job for me,” Bill added. 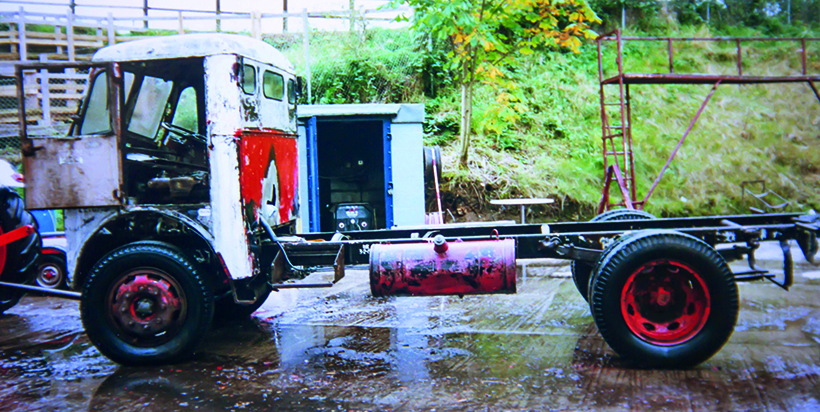 Starting-point of the restoration, though it was to be another seven years before work started.

Bill enjoyed going around the autojumble sales and at shows looking for parts for the Albion, and he also got a lot of help from friends along the way. “I am very grateful to a number of other vehicle owners who helped me to source parts. The restoration would have been a lot more difficult without their help.”

Finally, the body was fitted. This was built from scratch by Robert Tucker with Bill providing the Keruing timber for the flat which came from Edgecock of Buxton. “I had a pattern to show what I wanted, and Robert built it to my specifications on site,” Bill said. A living accommodation load was built by Bill with the help of Robert.

To make the Albion look as authentic as possible, and showing attention to detail, a covering sheet was bought from Stuart Canvas of Warrington which is held in place by hemp ropes bought locally.” 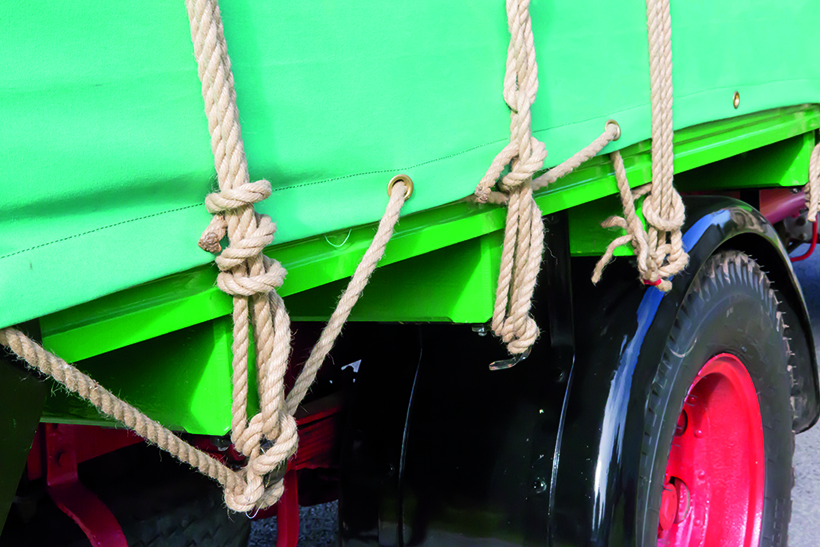 The accommodation box has been roped and sheeted in the traditional manner.

Bill’s family have a long history in transport. “I can remember my father, Gerald, running two Bedford TKs in the 1960s, they were hauling stone out of local quarries.” Gerald was also employed by Allinsons of Stockport. “I went with him as much as I could,” Bill said, “I travelled for miles on the bonnet of his vehicles.” Later Bill would go out on the road with his uncle Roy, “He was driving LAD cabbed Albions then.”

With that family history, it was no surprise that from a young age, all Bill wanted to do was drive a lorry when he became 21. However, when Bill left school aged 16 his first job was at Woodrow Universal, a printing works at nearby Bollington. Twelve months later, however, he joined Ambrose Wood & Son, an engineering and fabrication firm. “That was where I learned all of my welding and fabrication skills thanks to John Wood.” Bill gained his HGV Class 1 licence at the age of 21 and then worked for Parks Skip Hire for over 20 years. “I enjoyed servicing the vehicles there and also would do some welding on them,” Bill said. 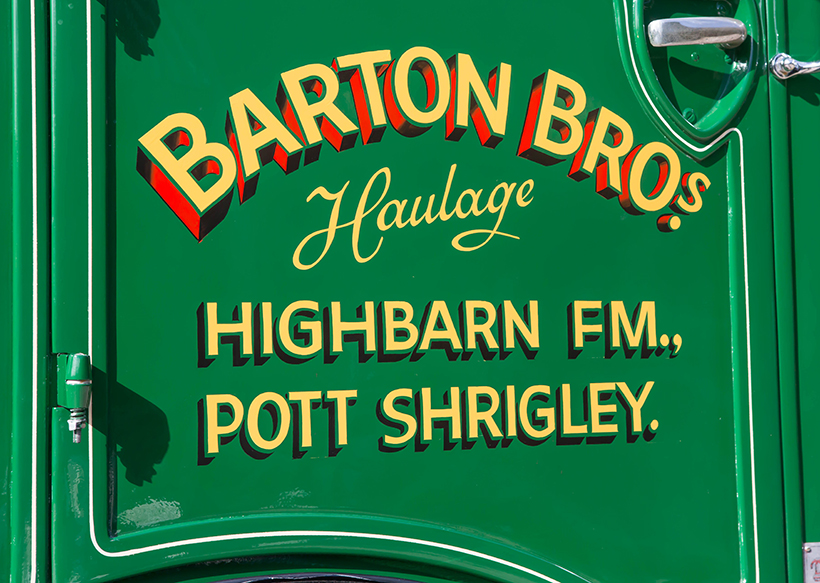 Signwriting on the door, headboard and ‘Sure as the Sunrise’ above the radiator was completed by Andy Russell of Poynton.

After leaving there, Bill moved to Irlams of Chelford, and when the firm was sold to Stobarts, joined them where he stayed for 12 years. Initially Bill worked as a driver, but then moved onto shunting trailers in the yard, first at Middlewich and later at Chesterfield before leaving Stobarts around four years ago to work at a foundry at New Mills. But Bill’s interest in lorries has been with him for all of his life, “That came from my father and my uncle Roy,” Bill said, “I owe it all to them.” 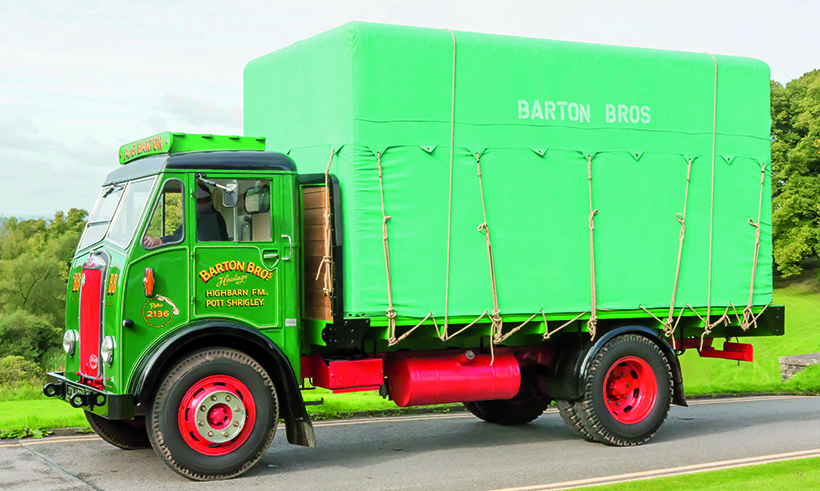 Back to Bill’s Albion, he obviously has enjoyed the restoration process, “It has been a labour of love,” he said. Now that it has been completed what other projects lie in wait.? “I am going to restore a Fordson Major tractor next,” Bill said, “And as for restoring another commercial; well you never know.” 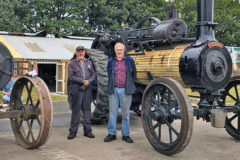 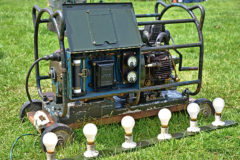