Mike Neale meets Barry Davies and his 1954, Citroen 2CV commercial rarity, to find out more about the vehicle and its restoration. 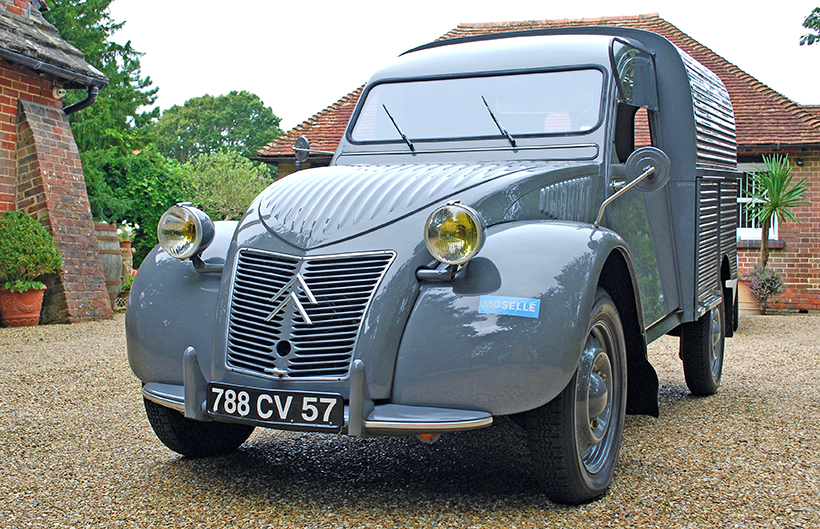 The Citroen 2CV was announced at the 1948 Salon de l’auto in Paris, going on sale in 1949.  The first Type A cars had a 375cc air-cooled, flat-twin engine driving the front wheels, which equated to two horsepower on the French ‘Cheval-Vapeur’, or CV scale.  This allowed the car to accelerate to the giddy maximum speed of 69km/h (43mph). Later the engine was enlarged to 425cc and subsequently to 602cc, which actually equated to 3CV, but the car’s model name was never changed.

The car had a full length, roll-back canvas roof, not for sunbathing but to allow oversized loads to be carried.  These were very much intended as utilitarian vehicles. 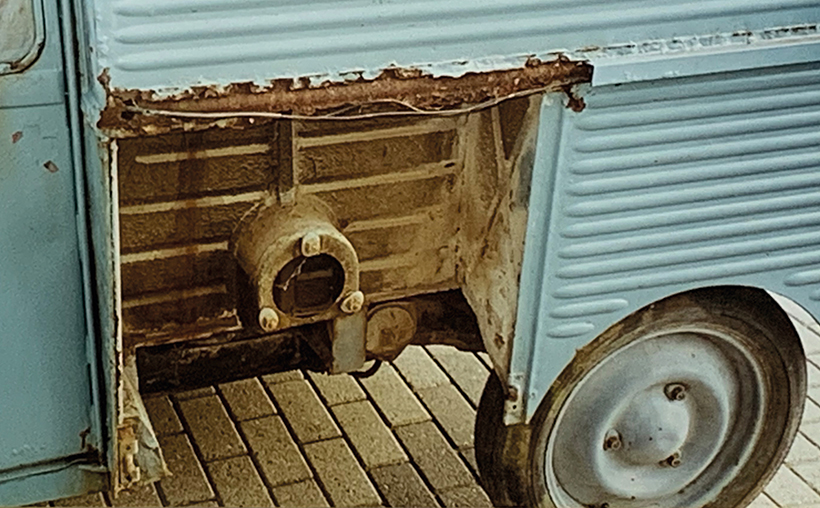 As found, with significant all-over corrosion.

At the October 1950 Salon at the Grand Palais in Paris, Citroen unveiled a prototype 2CV Van, the Type AU (the U standing for Utilitaire).  It was fitted with a prototype 425cc engine.  The new van had horizontal ribbing to stiffen the body along the side panels and over the entire roof.  Similar corrugations were found on the rear doors below the small, lozenge shaped windows.  The spare wheel was neatly stowed behind a lift-up flap on the offside, just behind the driver’s door. 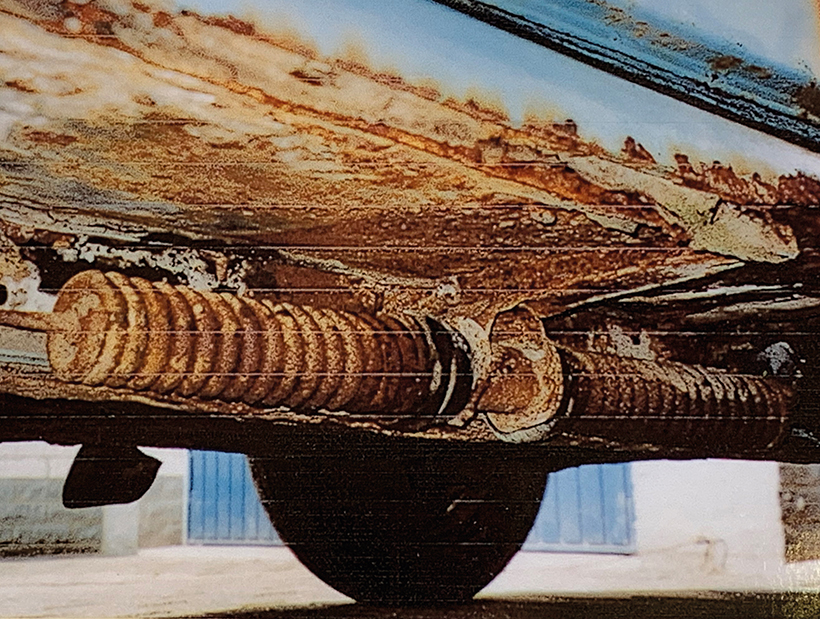 Underbody was particularly bad. It’s not uncommon for 2CV restorations to require a new chassis, but here there was the added complication of the unusual suspension arrangement.

The AU van had a payload of 250kg (550lb), and although the wheelbase was the same as that of the 2CV saloon, the slightly truncated van body meant that it was shorter overall, but wider and taller.  The ride height was raised by 10mm at the rear by placing blocks between the axle and frame.  Tyres were 135 section instead of 125 on the saloon.

Electrics were 6V. There was a single combined tail/brake light above the offside (LHD) rear door with the number plate split either side of this, and a single red rear reflector to the bottom left of the rear doors – square on the show prototype but round on production vans. No indicators were fitted. 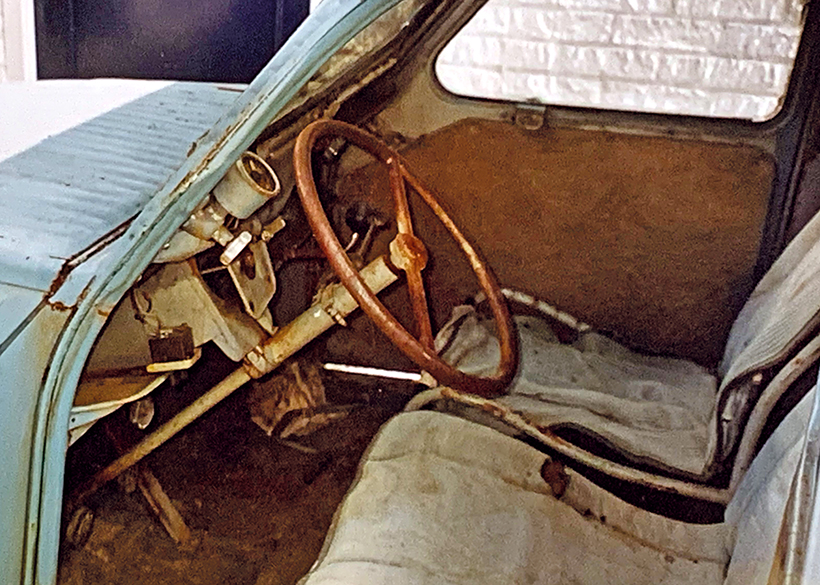 Cab area was a bit of a mess – to put it mildly!

The production version appeared in March 1951, looking virtually identical to the show prototype, aside from minor details such as the useful addition of a fuel filler!

However, instead of the 425cc engine seen at the Salon, which wasn’t ready for production, the AU van was launched with the 375cc engine.  With the heavier van body and a final drive of 4.43:1, compared to 3.87:1 in the saloon, the van’s top speed was even slower at 64km/h (40mph), which even by the standards of the day wasn’t really adequate. It came in for quite a bit of press criticism, particularly from l’Auto-Journal, who measured an actual top speed of just 61 km/h (38mph). 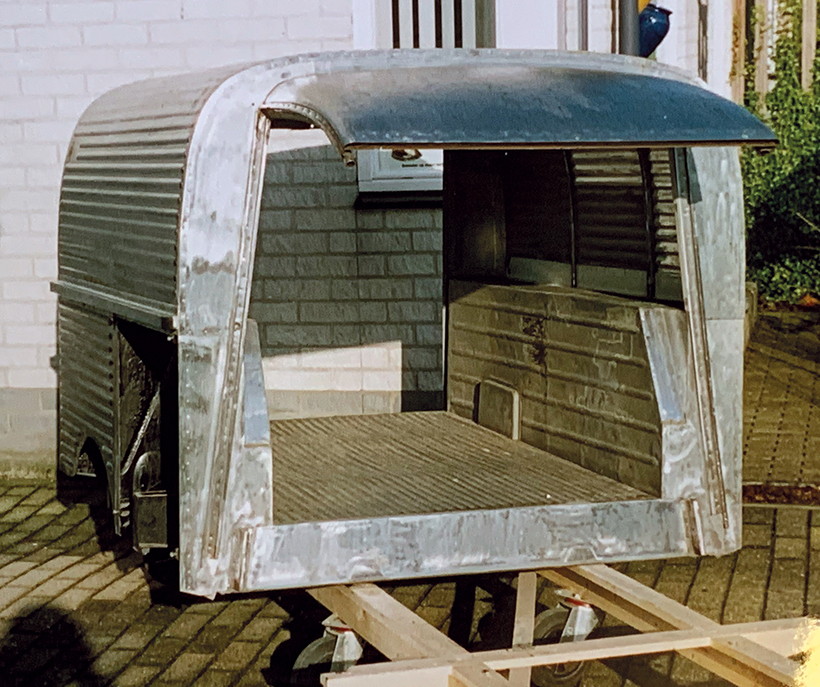 Salvation was at hand, albeit not for another 3½ years, when in September 1954 the 425cc engine was finally fitted to both 2CV saloons and vans, the car becoming the Type AZ and the van the Type AZU.  The increase in cylinder capacity was achieved by increasing the bore size from 62 to 66mm.

The payload of the AZU remained at 250kg, whilst the final drive was changed to 3.87:1. 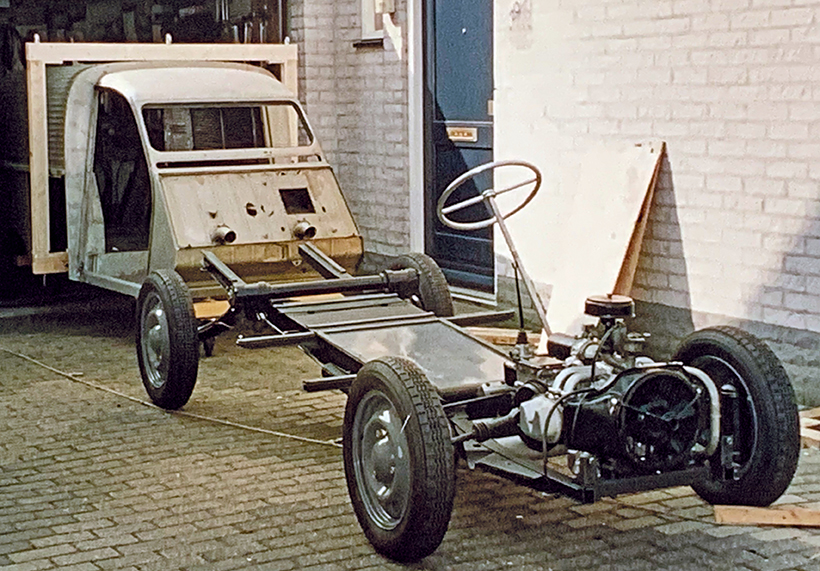 Building it back up; chassis modifications were approved by Citroen.

The specification of the vans differed in some respects from the equivalent 2CV saloons, for example vans were never fitted with the centrifugal clutch seen in Type AZ cars.

Originally, 2CV Vans were assembled alongside the cars at Levallois, but the factory didn’t lend itself well to the production of two vehicles which were actually quite different.  By 1954, Panhard had got into financial difficulty, having introduced their expensive to build, aluminium-bodied Dyna Z saloon. Citroen entered into discussions with Panhard, and in April 1955 they signed an agreement under which Panhard would build, exclusively, the van versions of the 2CV, from September 1955.

In December 1954, the Type AZU van’s suspension design was changed, with exposed springs now fitted.  This only lasted until May 1955, when it reverted to the previous suspension set-up with coil springs fitted inside tubes.

Real rarity
Open spring vans were thus pretty rare even in the 1950s, but now it is believed that only around 20 survive in France with just one thought to be in the UK, the one you see here. 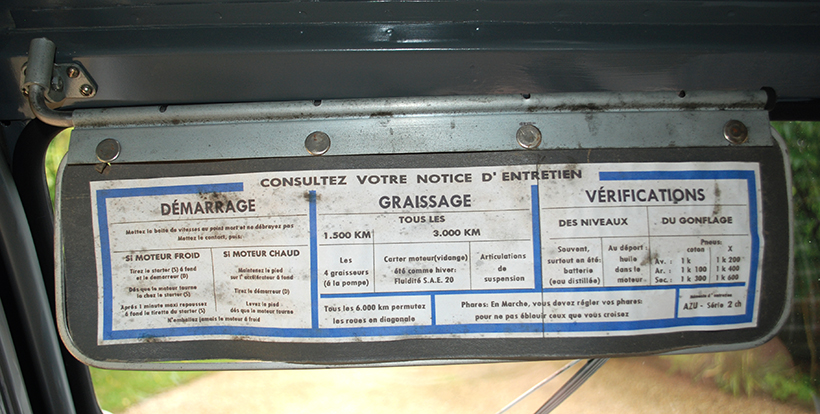 Some handy servicing information on the sunvisor!

The van is owned by Barry Davies of West Sussex, who bought it in November 2014.  The chassis number indicates it was built in Paris in December 1954 and first registered on December 20 1954.

It had been discovered by a Dutchman called Ton in 2000 in Metz in the Moselle (57) region of North-East France.  He had been specifically looking for a 2CV AZU van, as anything bigger would not fit in his workshop.  It was in a very poor state, pretty much a basket case, but its rarity as an open spring van meant that he felt it worth taking on. 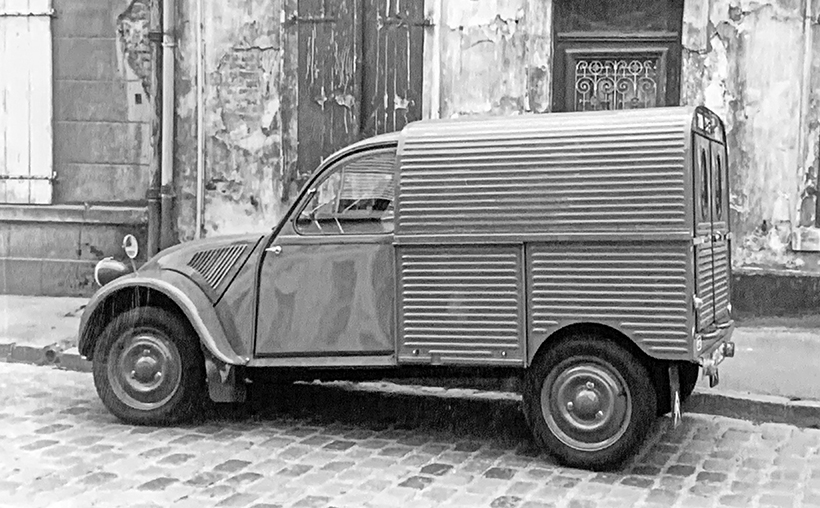 Though now based in Sussex, the van has been back to France several times post-restoration. Seen here in a typically French scene…

Ton had been an engineer by trade, having retired by 2000, and spent 3-4 days a week on the restoration over the next two years.  He started by removing the body from the chassis, the latter being completely rusty and beyond saving.  He acquired a replacement chassis, but the type used on open spring vans is quite different to other 2CV vans, so it needed to be modified. Due to these chassis modifications, Ton approached Citroen in the Netherlands who formally approved the work that he had done. 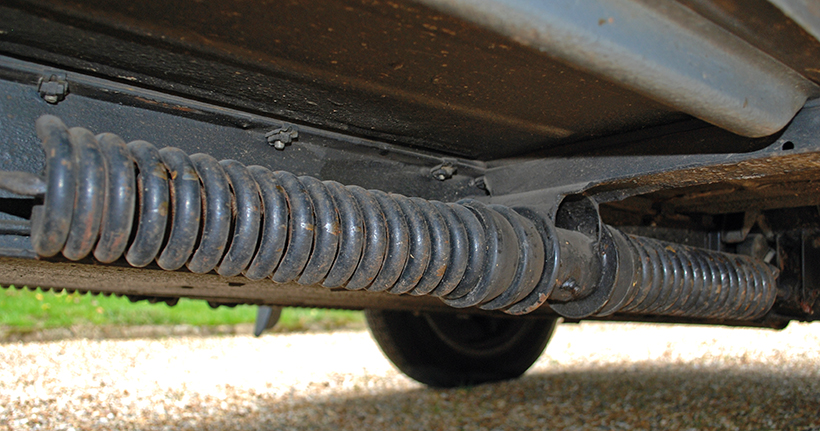 One of the exposed springs which make this van unique in the UK.

One of the necessary jobs was to make a new set of springs as the originals had suffered badly.  Many other parts were beyond restoring, so Ton travelled all over the Netherlands tracking down acceptable original parts.  The back doors were found in an old parts warehouse where they had been used to support a shelf since 1969.  A new windscreen panel had to be let into the bodywork as the original was so badly rusted.  Other good second-hand body panels were sourced as well as some new parts like sills and front doors. 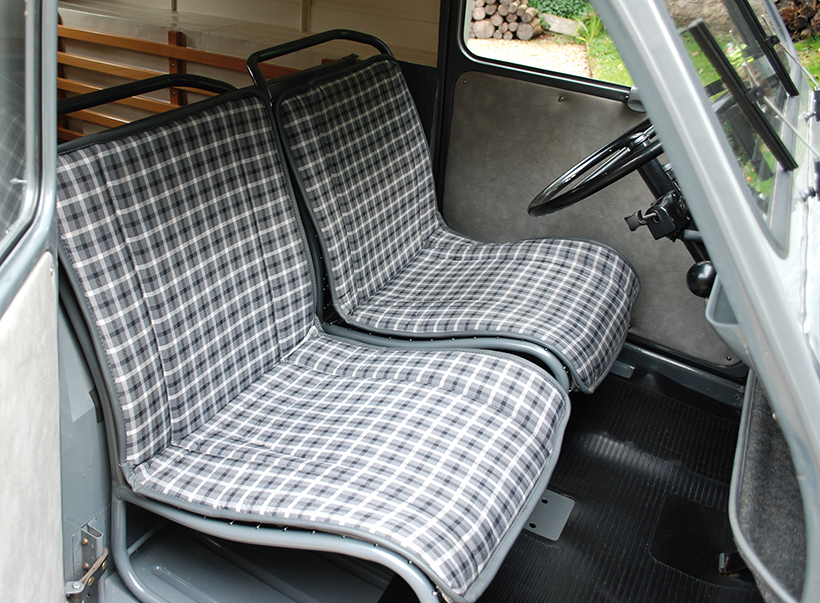 The 425cc engine is the van’s original, though, which was re-sleeved and new pistons and valve seals fitted.  It has a  four-speed gearbox, with synchromesh on the upper three speeds.

The van was sent off to the painters and resprayed in its original colour of grey AC132.  Inside, Ton replaced the upholstery and fabricated a complete new wiring system. 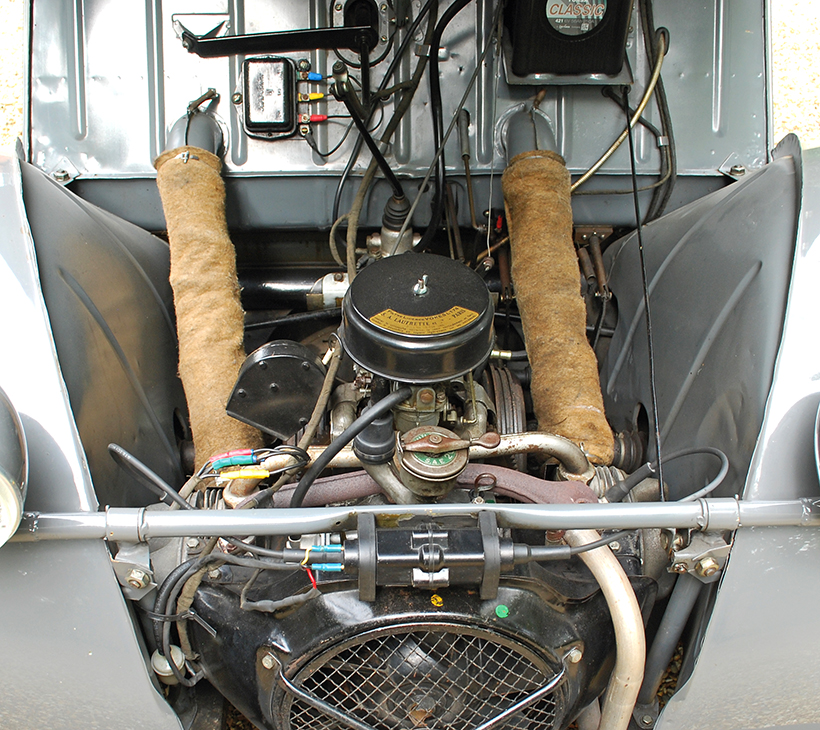 After the restoration was completed, Ton brought it over to a 2CV World Meeting in Kelso, Scotland in 2005.  There it was bought by Alan Lloyd from Surrey, and a few photos of the van sent in by Alan subsequently appeared in a ‘My Story’ section in Classic Van & Pickup magazine in July 2006. 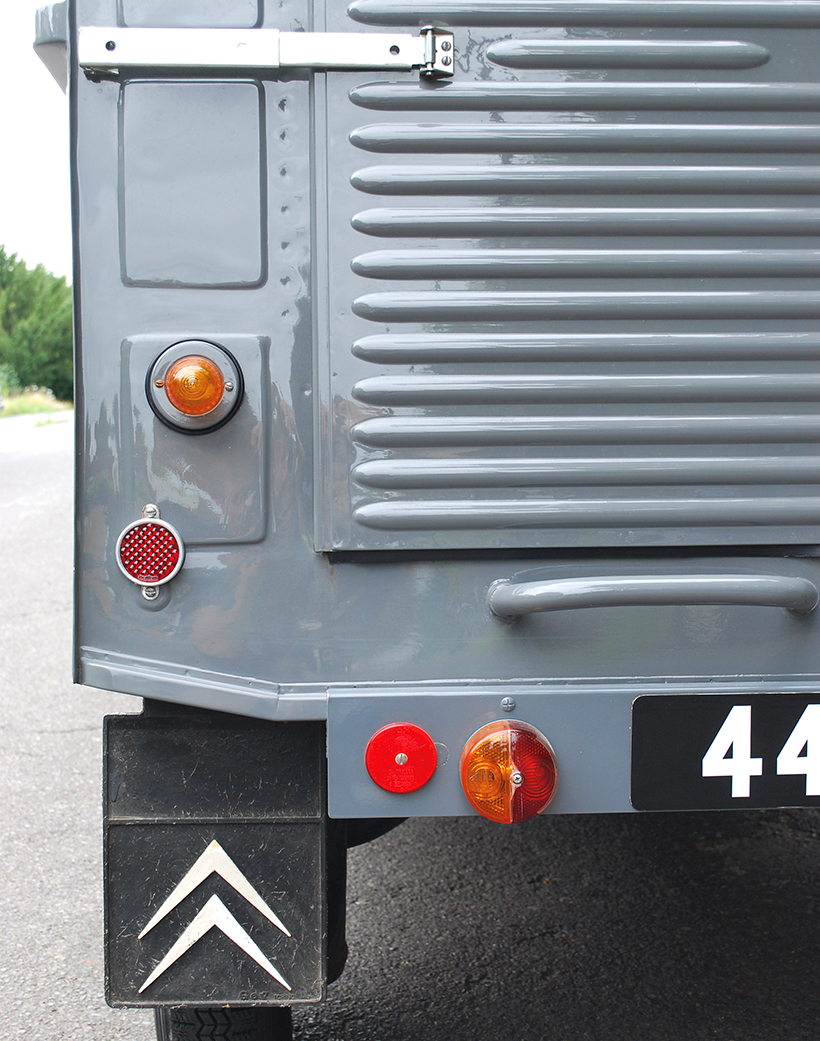 There’s something very French about a ‘corrugated’ van. Direction indicators were not fitted from new but now has a detachable rear panel that carries these and the British registration plate.

Fast forward to 2014 and Barry Davies was on the lookout for a decent Citroen 2CV van.  He knew that Alan had a few 2CVs and made contact with him to go and see the van.  Barry thought the price was a bit high, but he heard of another open spring van for sale in Deauville needing work, and when he worked out the restoration costs, he realised that could end up costing more.  A deal was done for a slightly lower price and the van came home with Barry. 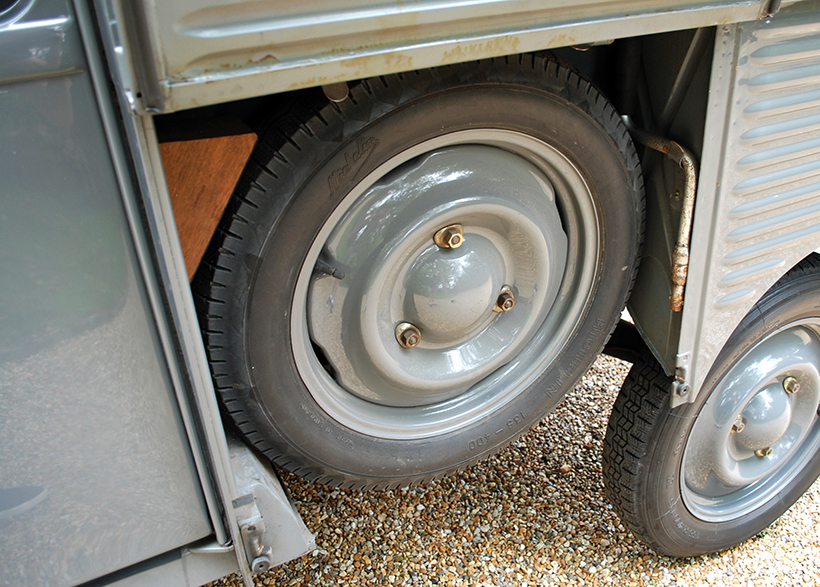 Concealed spare wheel; compare this picture to the ‘as found’ one in the restoration sequence.

“I’m interested in all sorts of classic cars, and have always liked 2CVs, particularly their shape, they are so sympathique (friendly),” explains Barry.  Since buying the van, he has put a new oil cooler on it, as the one fitted was leaking, but otherwise he hasn’t had to do much at all. 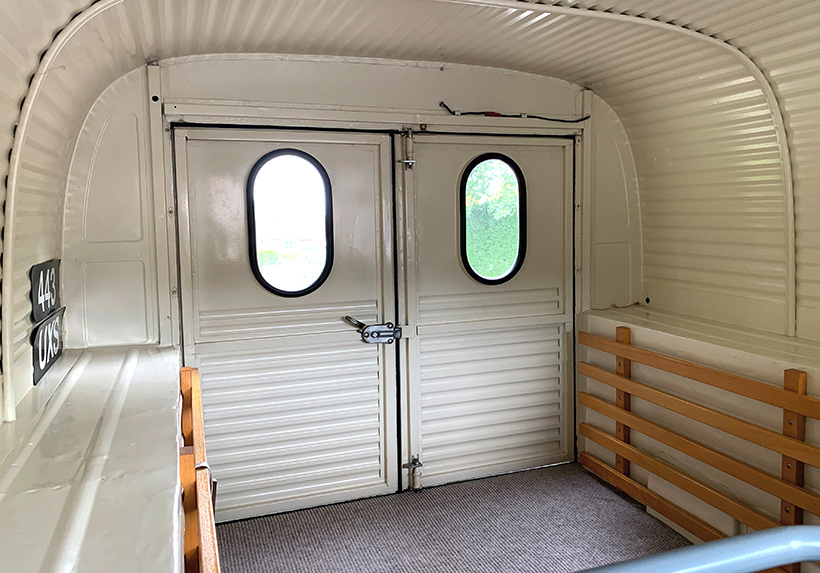 An additional tailboard has been fitted to hold the British rear number plate, which also has a pair of rear light units incorporating flashing indicators and tail/stop lamps, for safety reasons.  This can be detached for shows. At the front, flashing indicators have been fitted on body colour painted stalks behind the front bumper, which can be folded down out of sight below the bumper when not in use, which I thought was a particularly neat solution.  The British front number plate is magnetic so can also be removed.

“I’ve been in the arts supply business all my life, and I had thought of getting the van sign-written for my model making business, but I never got round to it,” notes Barry. 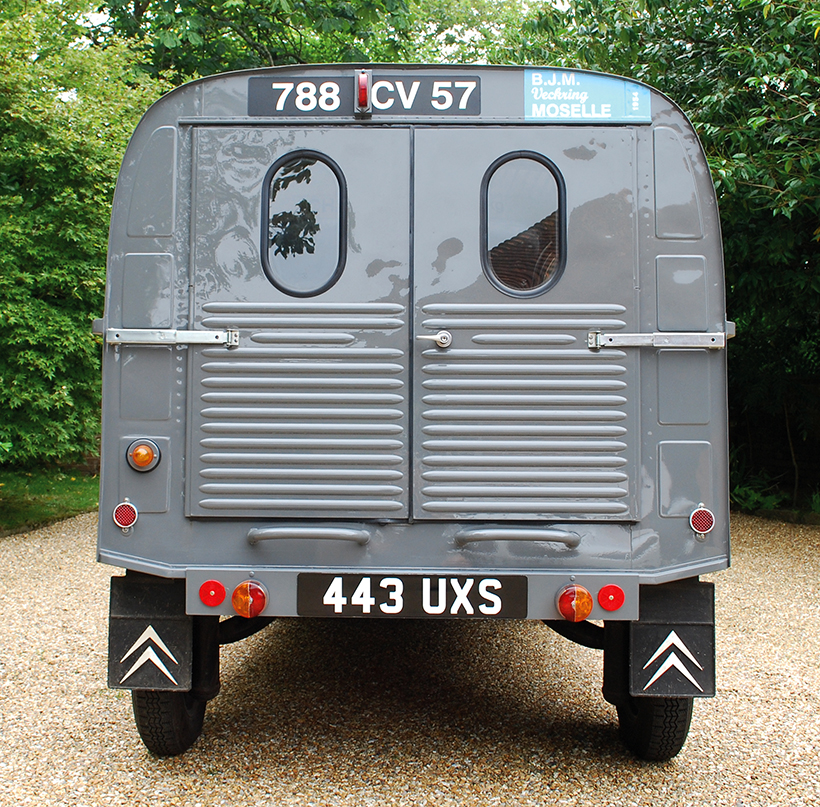 ◄ Concealed spare wheel; compare this picture to the ‘as found’ one in the restoration sequence.

Car shows have been a bit thin on the ground lately, but Barry organises a small local show at Dial Post near Horsham at lunchtime on the third Friday of every month.  He plans to take the van to Goodwood Revival.  “I’ve got a Jaguar E Type as well, but they’re ten-a-penny at Revival,” laughs Barry.  “I might also take it on the next HCVS London to Brighton run.”

“The top speed that it is happy at is around 80km/h (50mph).  We sometimes take the van down to France, avoiding motorways and using the back roads.  Usually there isn’t another car to be seen in front of us.  There are plenty behind, though…” 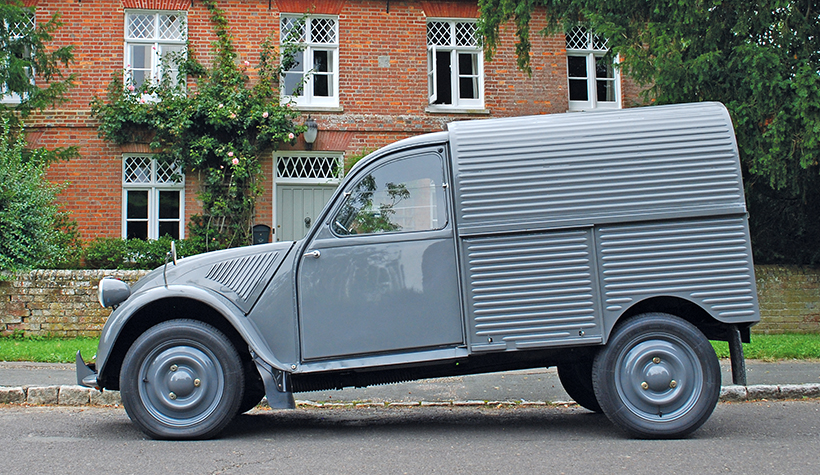 It’s amazing to think that this van was restored 20 years ago. Thanks to Barry Davies for his assistance with this article. 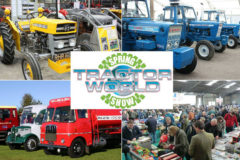 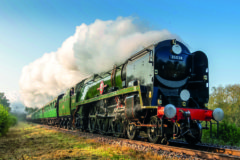