Restored eight-wheeler tippers are few and far between, but Pip Dunn has tracked down a very rare survivor, a 1984 Magirus Deutz. 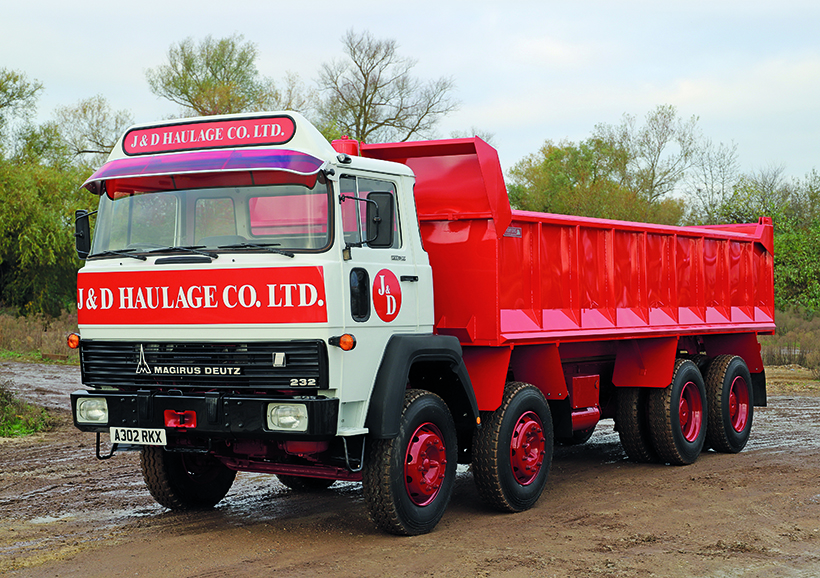 Go to any classic truck show and it’ll be packed with tractor units and maybe a few smaller rigids. All great stuff, but tippers, especially 8x4s are certainly in a minority. However, a few are now being restored, and being shown for all to enjoy.

A star attraction at the 2021 Truckfest show at Peterborough was a line-up of four restored eight-leggers from the 1980s. There was a Foden Haulmaster, next to a rare Hino FY, a Foden 4300 and a Magirus Deutz 232. The latter three were all owned by Martin Lavelle based in Rickmansworth, and so I went down to see the German and Japanese models. 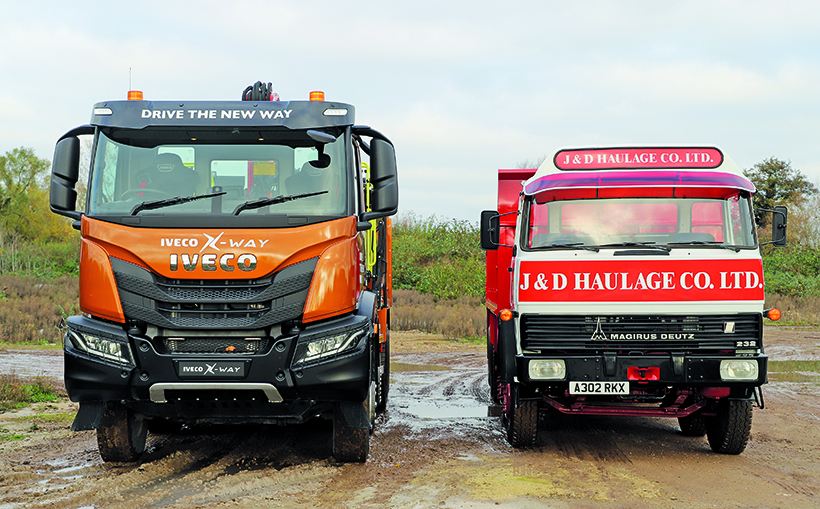 Compared with the Iveco X-way, the Magirus looks positively diminutive.

The Hino will be featured in our sister magazine Classic & Vintage Commercials very soon, but for Heritage Commercials I cast my eyes over one of the best restored Magirus Deutz trucks I’ve ever seen. Admittedly, there aren’t that many of them in the UK, but you get the idea! This thing is truly stunning. It’s also so rare! 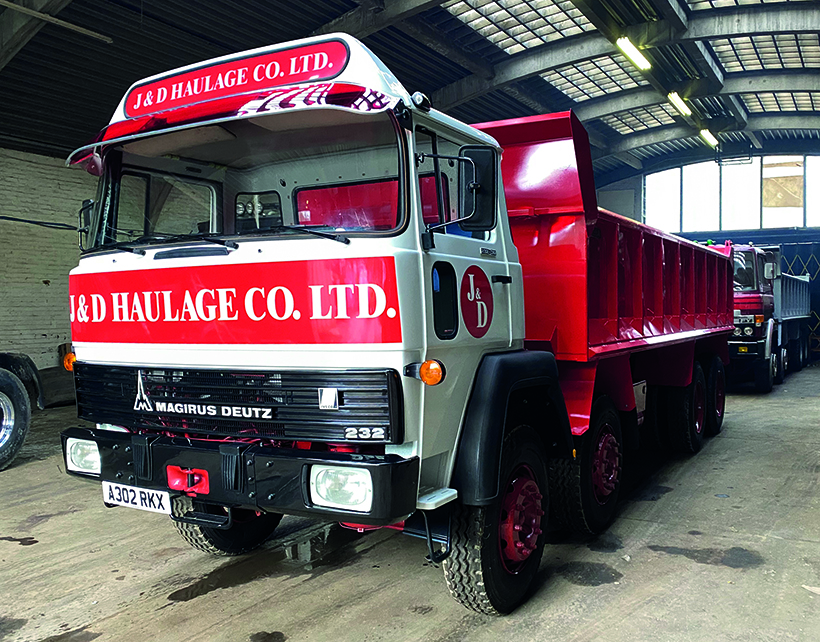 The Magirus is nicely protected from the elements in a secure and dry shed.

And to get to Rickmansworth, I talked to my good friends at Iveco who kindly lent me a brand new, state-of-the-art, top-of-the-range X-Way 480 8×4 tipper to make a little comparison between old and new, and see how the venerable eight-legger has come on in leaps and bounds during the past few decades!

A rare survivor
This isn’t the only restored Magirus 8×4 in the UK, we know of at least one other, but the numbers of preserved ‘Maggies’ here can be counted on the fingers of one hand, that’s for sure.

The Iveco has a crane while the Maggie is a conventional tipper.

A302 RKX is on its original plate, registered in Bedford, and dates from 1984. At that time the old Magirus Deutz cab, designed in the late 1960s, had been dropped from tractor units in favour of Fiat cabs. That was because, in 1975, Fiat from Italy joined forces with Magirus from Germany, OM and Lancia, also from Italy, and Unic from France to create Iveco – which actually means International Vehicle Corporation. 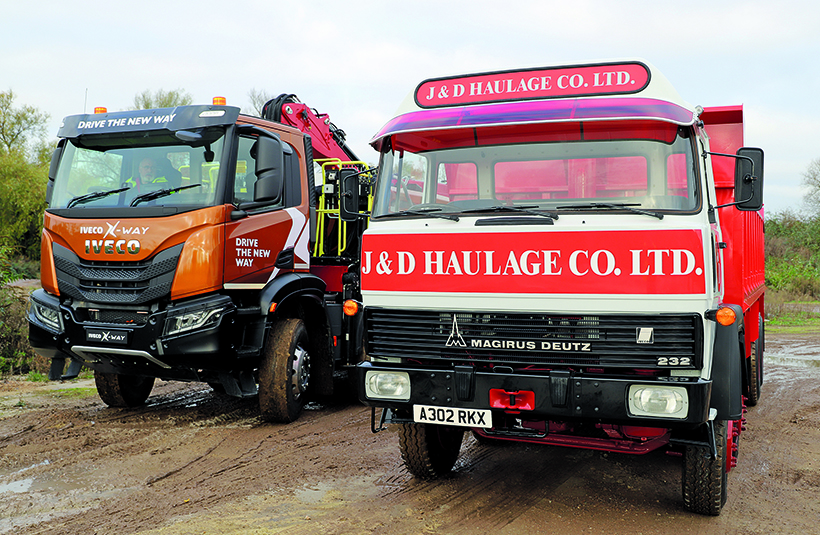 The Iveco looks incredibly mean and ready for business compared with the more dated design of the 232.

Fiat cabs started to be used in the late 1970s on Magirus products, but the multi-wheel rigids retained the Magirus cab for a few years thereafter and, indeed, the last were seen on D-plates before a Fiat-designed cab was used thereafter, until bespoke Iveco cabs were developed in the 1990s.

Says Martin: “We got the truck out of Rush Green Motors [scrapyard] in 2012. It was a wreck when we bought it, so we had it fully stripped down. But it had only worked for two years and had its last MoT in 1985. The chassis and brakes were still in very good condition considering it had been stopped nearly 30 years! 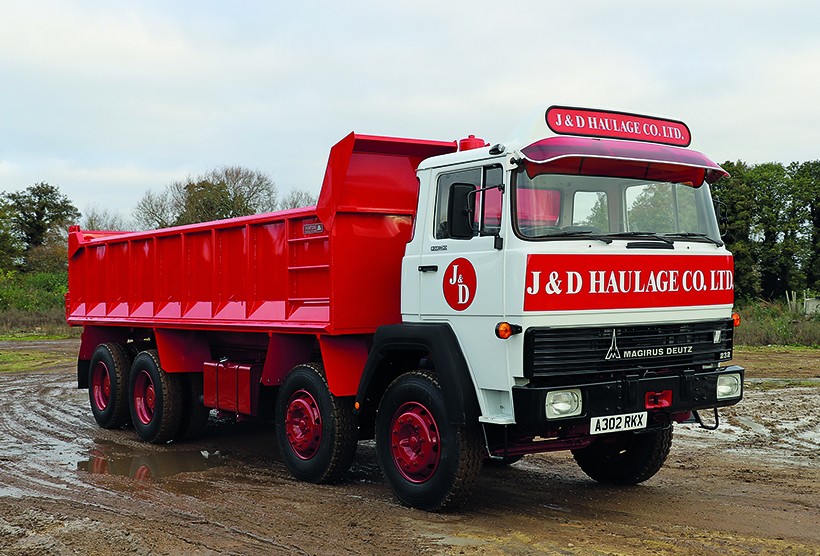 Nearly 20 tonnes could be loaded onto the old Maggie, pretty much what you get today.

“The cab, however, was knackered. It had no windows.” It was clear then, that if this project was to be a success, replacement parts would be needed, and the best place to go for them would, be from mainland Europe. “We went to Italy to buy an Iveco Turbostar and, while there, we found a V10 Magirus 310 cement mixer which we were able to buy for other spare parts. It was a right-hand-drive 6×4 so we did a deal and loaded it on the low-loader with the Turbostar and brought them both back.” 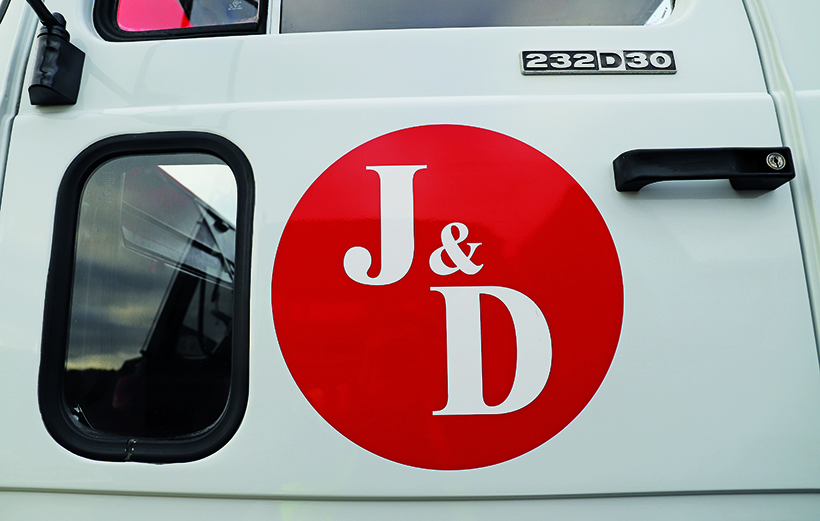 The passenger door has an extra window

The engine in the 232 is a V8, so the spares donor’s engine was no use for that, although it did have plenty of useful spare parts regardless. “We were able to recover the cab, however. We also found another spares-only 232 tractor on eBay, and snapped that up in 2014.” 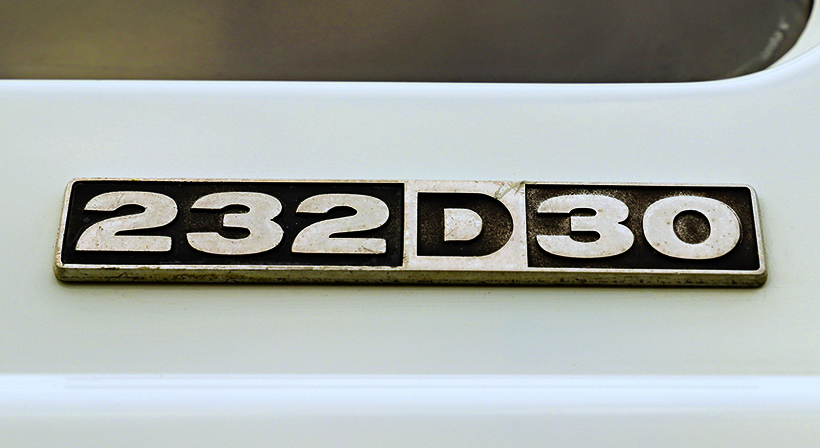 The badge denotes the power and gross weight.

The project then stalled a little as it fell behind other restorations, and nothing was done on the 232 for a few years. “It got to the stage when it was just stopped but, at Christmas 2020, we decided we’d better crack-on and get it finished. So we did!”

With all hands on deck, and a mass of accumulated parts, plus contracting some jobs out, the Maggie came together and, by the summer of 2021, it was ready to go. Says Martin: “It’s fully roadworthy and now ready for its MoT. It’ll pass no issues!” he laughs! 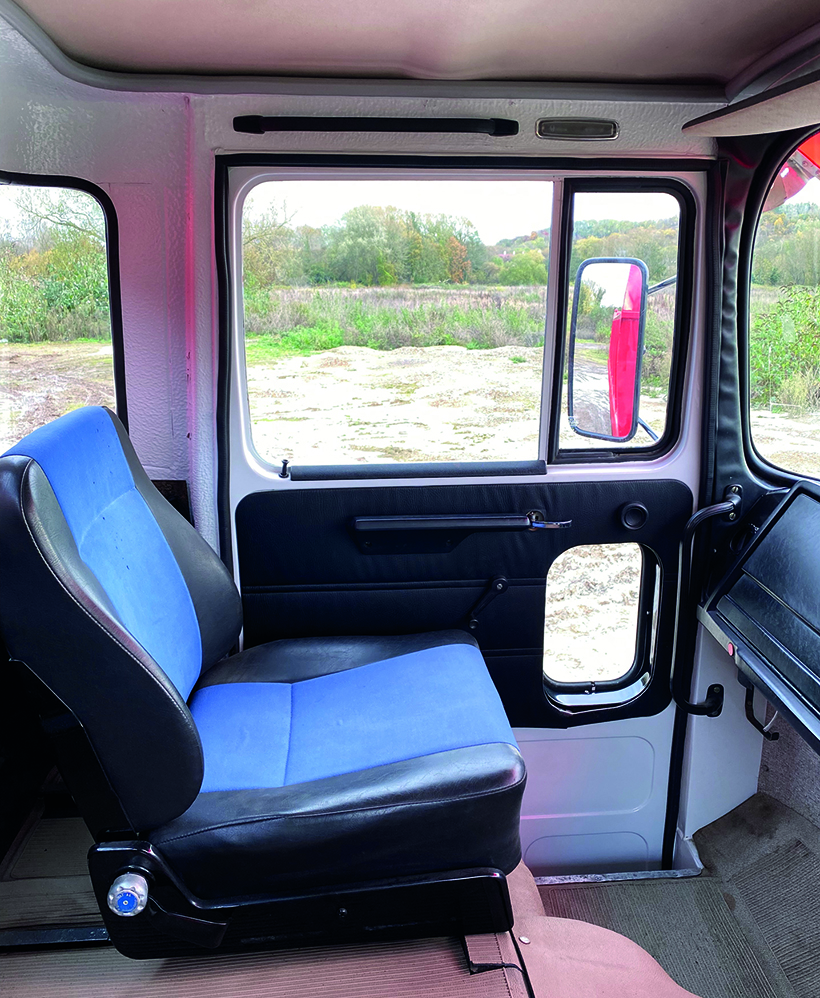 Magirus Deutz 232 tippers had low passenger door windows long before any Mayors of London got involved!

“It’s a little noisy but not too bad to drive,” he says. “The 232 owned by Foss’s is the only other 232s eight-legger we know of that’s been restored.” Martin now has two spare day cabs – one from a T-reg tractor unit that’s dumped outside the yard’s office, plus there’s still the V10 310’s chassis intact. 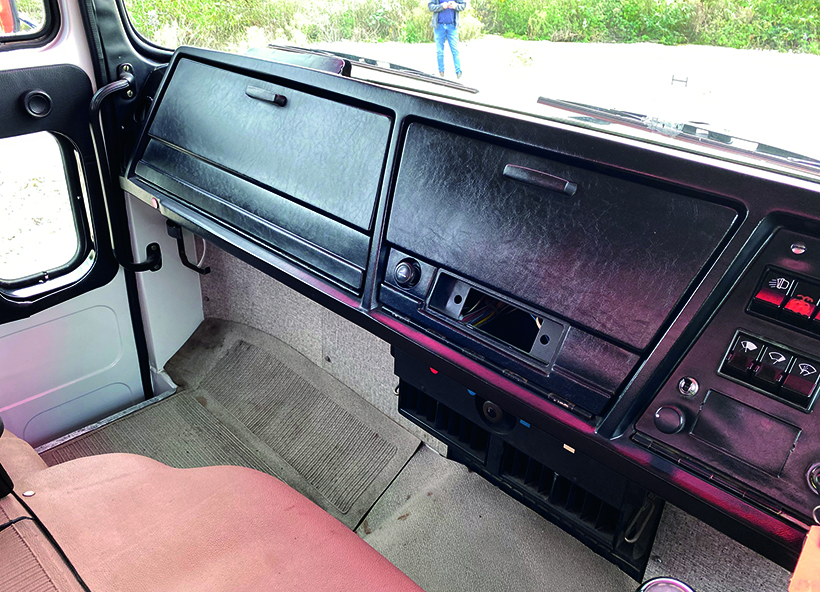 The cab is very basic inside, but given they get quite muddy, plastics and vinyl is easier to clean.

The Magirus 232D30FK 8×4 dates from the 1970s, and was available to UK operators from 1972. The 232 was also offered as a 6×4 rigid or a 4×2 tractor, and used a Deutz F8L 413 four-stroke 11.3-litre V8 air-cooled engine which produced 229hp and 722Nm of torque. A six-speed constant mesh gearbox, with a splitter gave 12 forward gears which was the standard for this model. Sleeper cabs were an option – quite commonly seen on tractor units, less so on rigids. In fact, it’s debatable if any tippers ever had them – sleeping on tipper work wasn’t a thing in the 1970s! 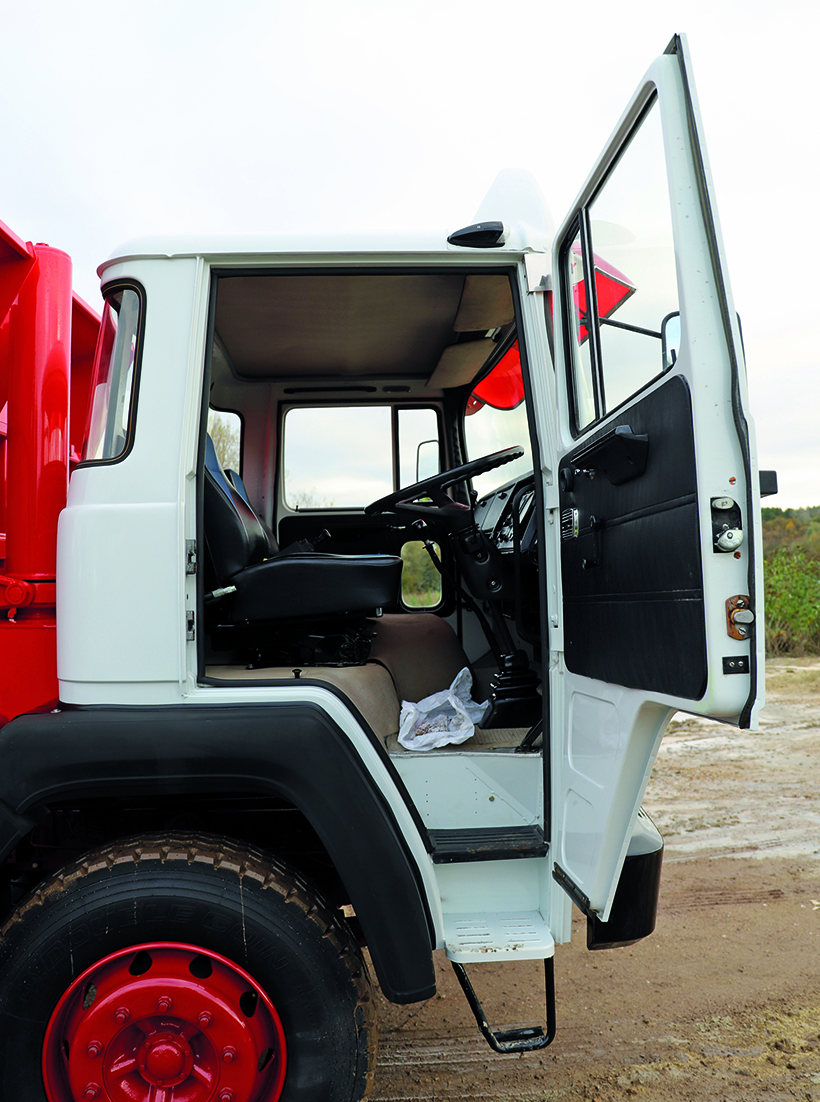 Entry is via two steps and it’s a bit of a climb into the cab. The grab handles are poor compared with newer trucks!

The new kid
You can’t help appreciate how tipper chassis have progressed in the intervening 50 years since the 232 first appeared on the scene. The new X-Way – while still a day cab example – sits so much higher. Under the cab is a similar-sized engine – 11.1 litres – but it’s a straight-six with a turbo and thumps out 480hp;  well over twice that of its predecessor. The entry steps are very small and basic.

The hefty manual gearbox of the oldie required a lot of effort to use compared with the smooth and seamless automatic transmission of the new machine – although Iveco is one of the few manufacturers that will still allow you to specify a manual should you so desire. The new truck grosses at 32 tonnes as opposed to 30 of the older machine, although is heavier before its loaded. 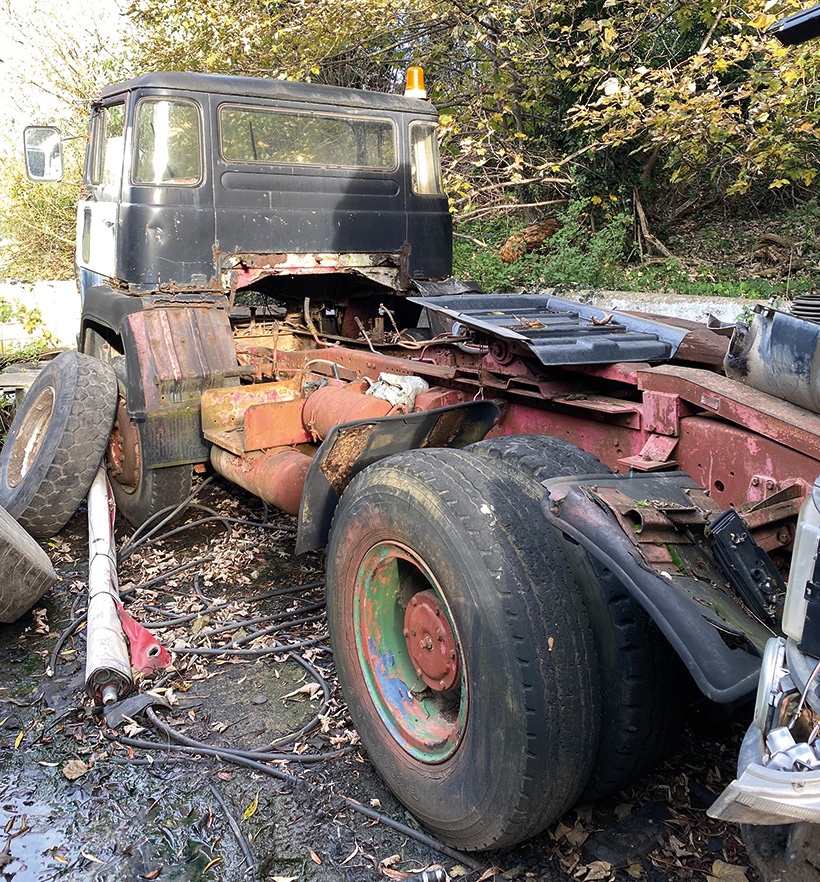 This old 232 day cab tractor is a source of spares, and is beyond hope for restoration.

The cab is so basic on the older truck, and that was actually one of the better cabs in its age, especially compared with, say, a Leyland Octopus or an ERF B series. 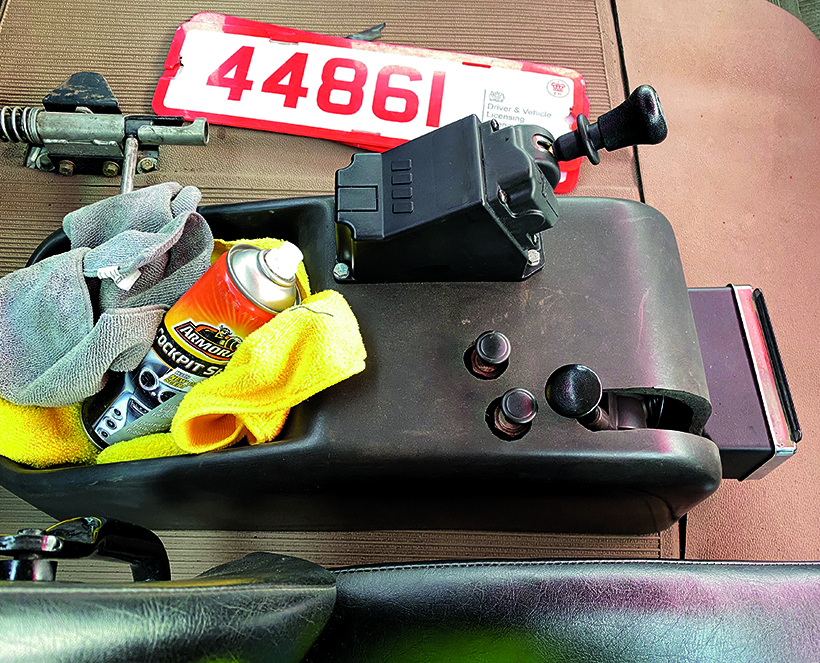 The handbrake is very cumbersome by today’s standards.

I have said this many times before but, given the choice for a drive, I’d take the oldie – but that’s just for a drive. For any day-to-day work, the new Iveco is a million times better and, if I were being taken on as a driver and given the choice, then I’d take the X-Way any day of the week! It might lack the character of the 232 – realistically that’s only because it’s new – but as a truck to drive, and work with, even for a day it has to be said, it’s much better! But also, let’s be honest here, the Maggie will turn a lot more heads! And so it should! The Iveco badge was on all Magirus trucks from the mid 1970s.

Martin is certainly happy with his restored Maggie. He understands its ability to turn heads and start conversations, with people regularly telling him at shows that they had one when they started on the job. 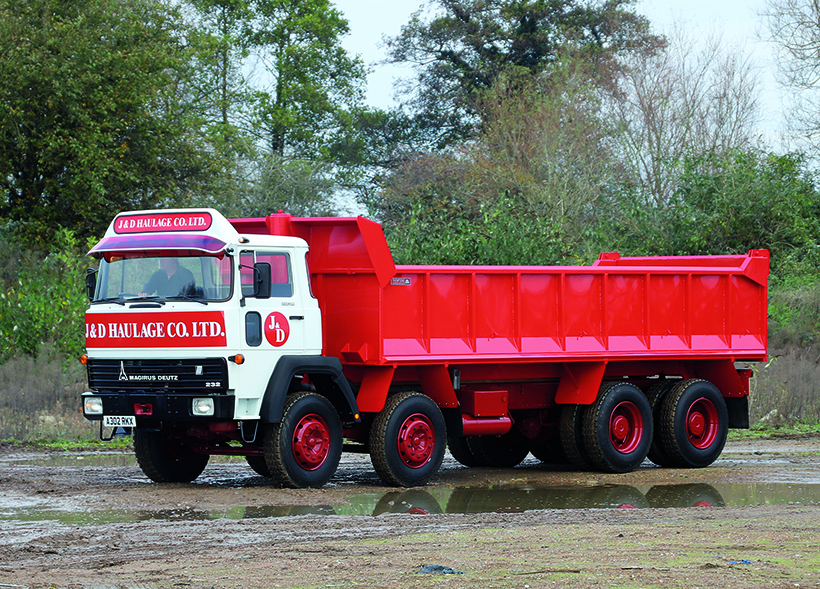 It was a relatively grey day for the visit, but the quarry was a typical setting for this kind of truck.

Part of the reason for restoring this kind of truck was, they were so common back in the 1980s on the London muckaway scene. Nowadays, Martin has DAF and Scania eight-leggers, not to mention Scania 770S tractors for bulk work. The trucks might change, but the job never stops! But this Maggie is one hell of a beast! 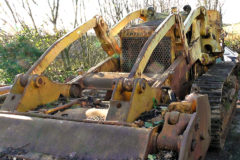